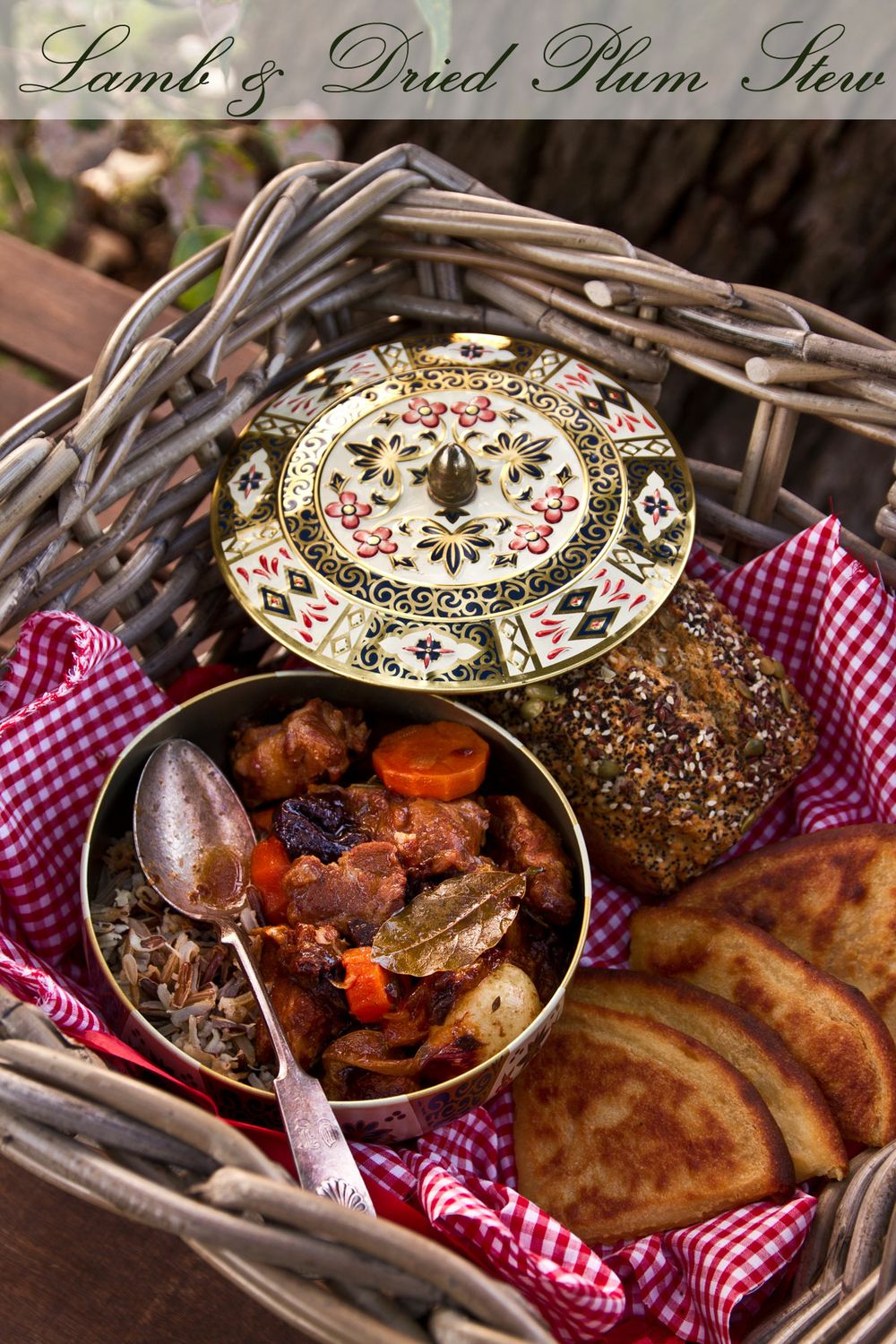 "If you could have anything in the world right now what would it be?" my six year old friend Jenny said to the group of us.

"I want a pony!" Michelle said.

"I want to go to Disneyland!" Alison said.

"I want a piece of apple pie!" I answered.

When I was younger and life was simpler, I dreamed only of apple pie. As my family did not believe in desserts, the opportunity to eat cakes and apple pies was relegated to birthdays at other people's homes. And given that kids don't generally want apple pie for a birthday cake, I ate apple pie once but it was a time when I savoured every mouthful. I would often get cravings for apple pie and to quiten me down my parents once said to me

"Just imagine that you're eating it"

So I went to bed and lay on my bottom bunk bed thinking of every bite of the apple pie I had eaten the time before. I was concentrating so hard that my eyes were squeezed shut and my fists were balled. And then every texture came flooding back to me, the soft texture of the apples, the aroma of the cinnamon and the thick, butter crust. I could taste every bite again.

I am fortunate enough to never have gone hungry when I was young but I know that often people do and hunger for us here is a different concept than it is in other countries too. I was urged to make something from The Hunger Games books by Suzanne Collins, those books and movie that have taken the world by storm. The problem was, that whilst many American kids had read this book thus ensuring a healthy turnout at the theatres, Australian kids like us were less familiar with them. Nevertheless when many friends had reported that they had devoured the books quickly I sat up and took notice. Then came reader Amanda who asked me if I could make something from the book which made me even more curious. I would of course have to read the book and see what the food was like and over two nights I sat up in bed reading each page unable to put it down. 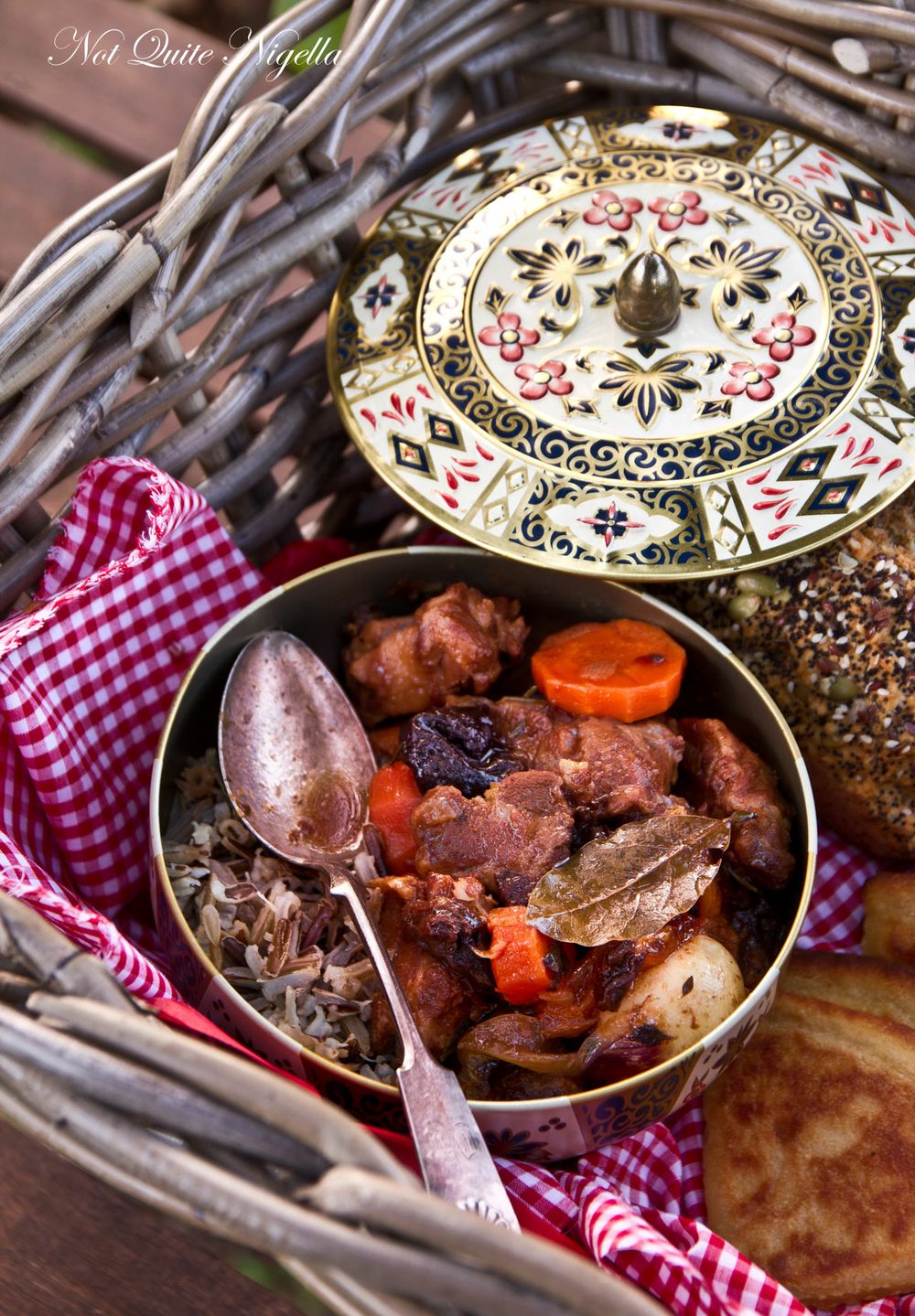 The dish that stood out in my mind was the lamb stew that was heroine Katniss Everdeen's favourite. The fictional novel is set sometime in the future in a place called Panem (formerly North America). It is a place where resources are scarce and people are segregated into districts. Every district is controlled by the Capitol and when the districts rebelled against the Capitol, they were decimated with one district completely destroyed. To prove and reinforce their domination, the capitol had every district send one boy and one girl to take part in "the Hunger Games"  which is kind of like brutal reality tv show, where the kids fight each other to the death with only one victor all in the name of entertainment. The protagonist Katniss is from District 12 which is the poorest district where meat is scarce and she makes do by hunting so food and therefore hunger is quite a predominant theme.

The way she described eating that first mouthful of stew was the way that I remembered my first bites of apple pie. My friend Angela from Spinach Tiger made this stew and it looked mouthwatering. There is an unofficial Hunger Games cookbook where they outline a recipe for the lamb stew and I decided to adapt it to do it in a pressure cooker to mimic the pressure that the contestants would have felt and because, to be honest well I was hungry and I had less than an hour to make dinner.

I served this with some wild rice as per the book's suggestion but also added a wonderful seed laden handmade Irish Soda Bread given to me by Paddy the Baker which had a generous coat of seeds reminiscent of Peeta's bread as well. I also added some divine potato scones, also from Paddy. The potato scones are meant to go with something like Irish Stew but I thought that this might fit too.

Please don't be scared by the long ingredients list for the stew, the method is a cinch and if you make this in the pressure cooker it literally cooks for 20 minutes with just a bit of browning beforehand of the meat and onions. I've also given instructions for making this in a slow cooker or in a pot on the stovetop. Any of these will do and will give you a rich, heady stew sweet with prunes and apricots with a rich, flavoursome and plentiful sauce. Also, a big thank you to Faith for the lovely ornate container that I served the stew in!

So tell me Dear Reader, have you read or seen The Hunger Games? And what is your favourite book to movie or tv adaption? 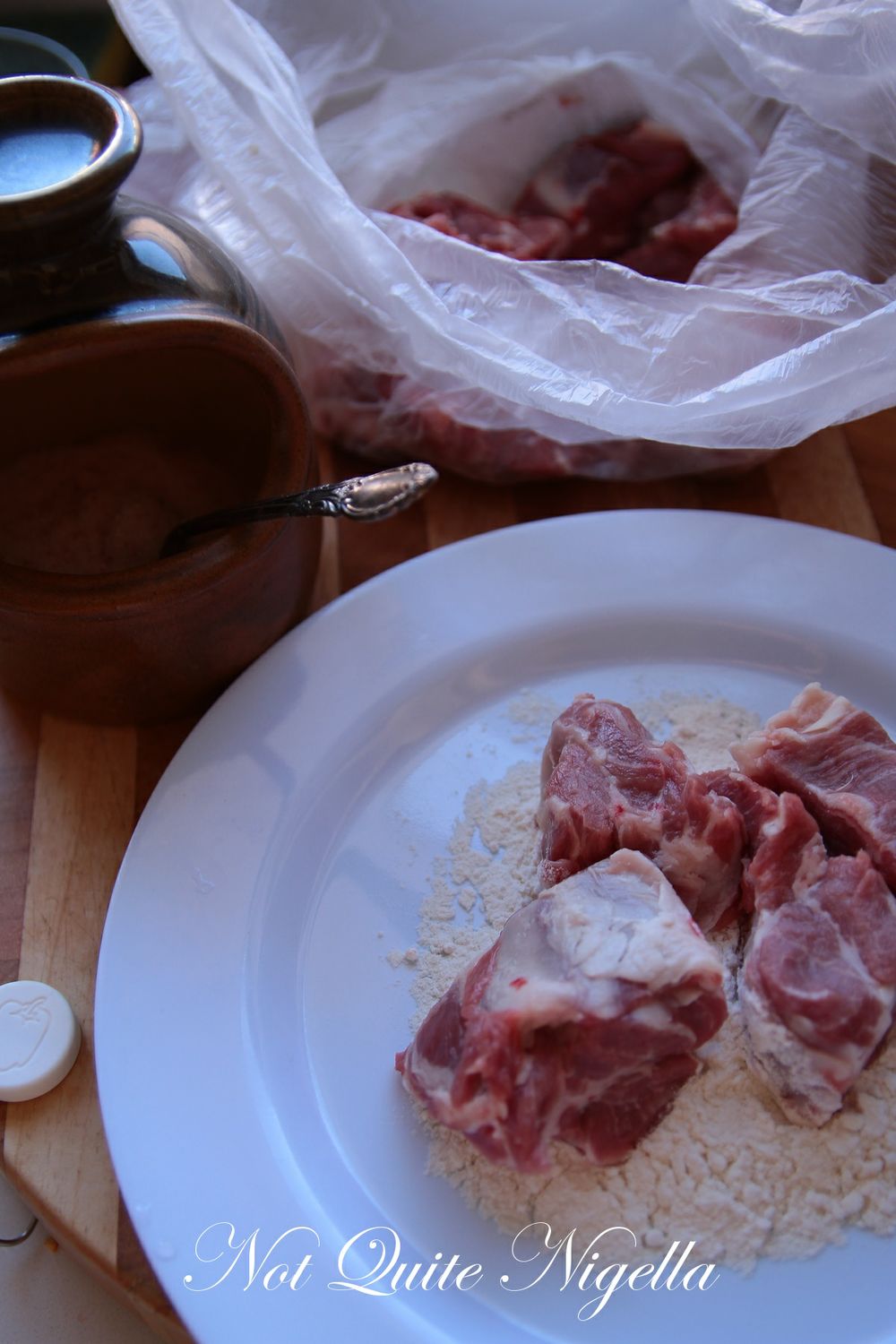 Dredging the lamb pieces in flour

Step 1 - You can make this in a pressure cooker, slow cooker or in a regular cast iron pot on the stove top. I will give instructions for each but the first few steps are the same. On a shallow plate, mix the flour, salt and pepper and dredge the lamb pieces shaking off any excess. 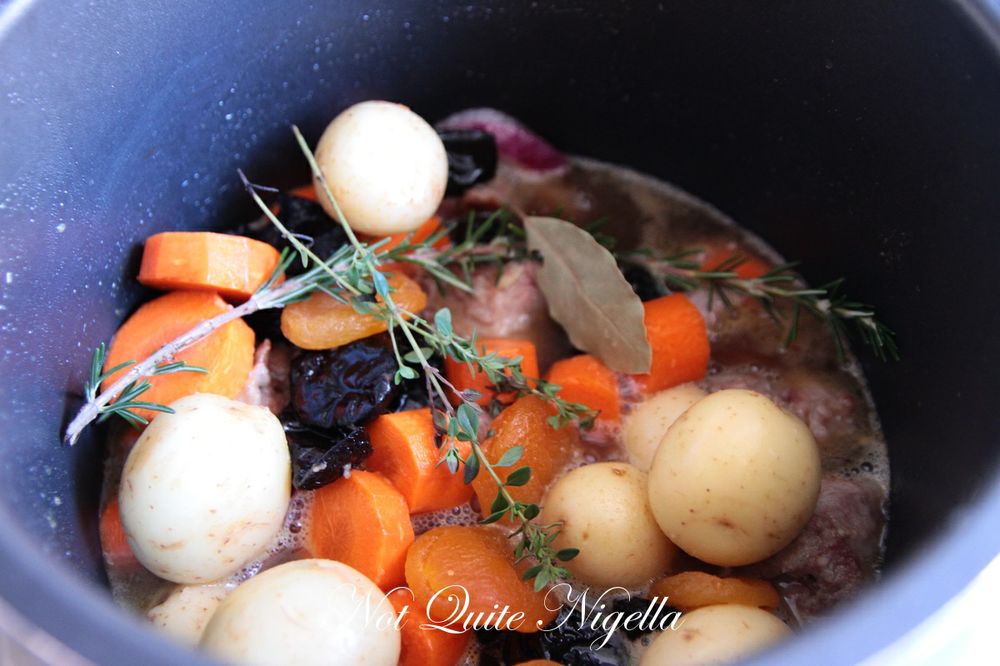 Step 2 - Heat your cast iron pot or a frypan on medium to high heat and brown the lamb pieces in the oil in three or four batches (the Breville slow fast pressure cooker that I use can brown and saute too as can some slow cookers so use them if you have them to save on additional washing and if you are using a cast iron pot, you can of course do it all in the one pot). Then add the garlic and onion and stir until the onions become translucent. 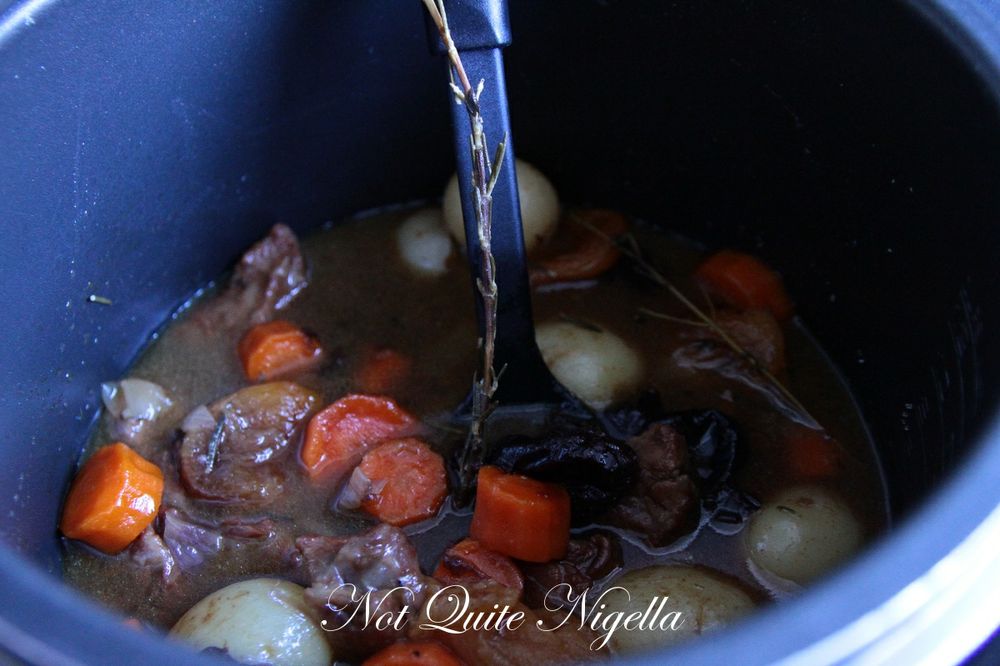 3. If using a pressure cooker: add the stock, sugar, carrots, potatoes, prunes, apricots, rosemary, lemon thyme, bay leaves and ginger beer to the lamb and onion mix. Set to medium pressure and cook for 20 minutes. Release pressure and taste to see whether salt is needed.

4. If using a slow cooker: Add the stock, carrots, potatoes, prunes, apricots, rosemary, lemon thyme, bay leaves and ginger beer to the lamb and onion mix. Cook on low for 6-8 hours. Taste to see whether salt is needed

5. If using a pot on the stovetop: Add the stock, sugar, carrots, potatoes, prunes, apricots, rosemary, lemon thyme, bay leaves and ginger beer to the lamb and onion mix. Gently simmer with the lid on, stirring occasionally for 1.5 to 2 hours and taste to see whether salt is needed.

Interested in trying another variation of this? My friend Julie from Gourmet Getaways also made a version using a slow cooker and it sounds delicious! :) 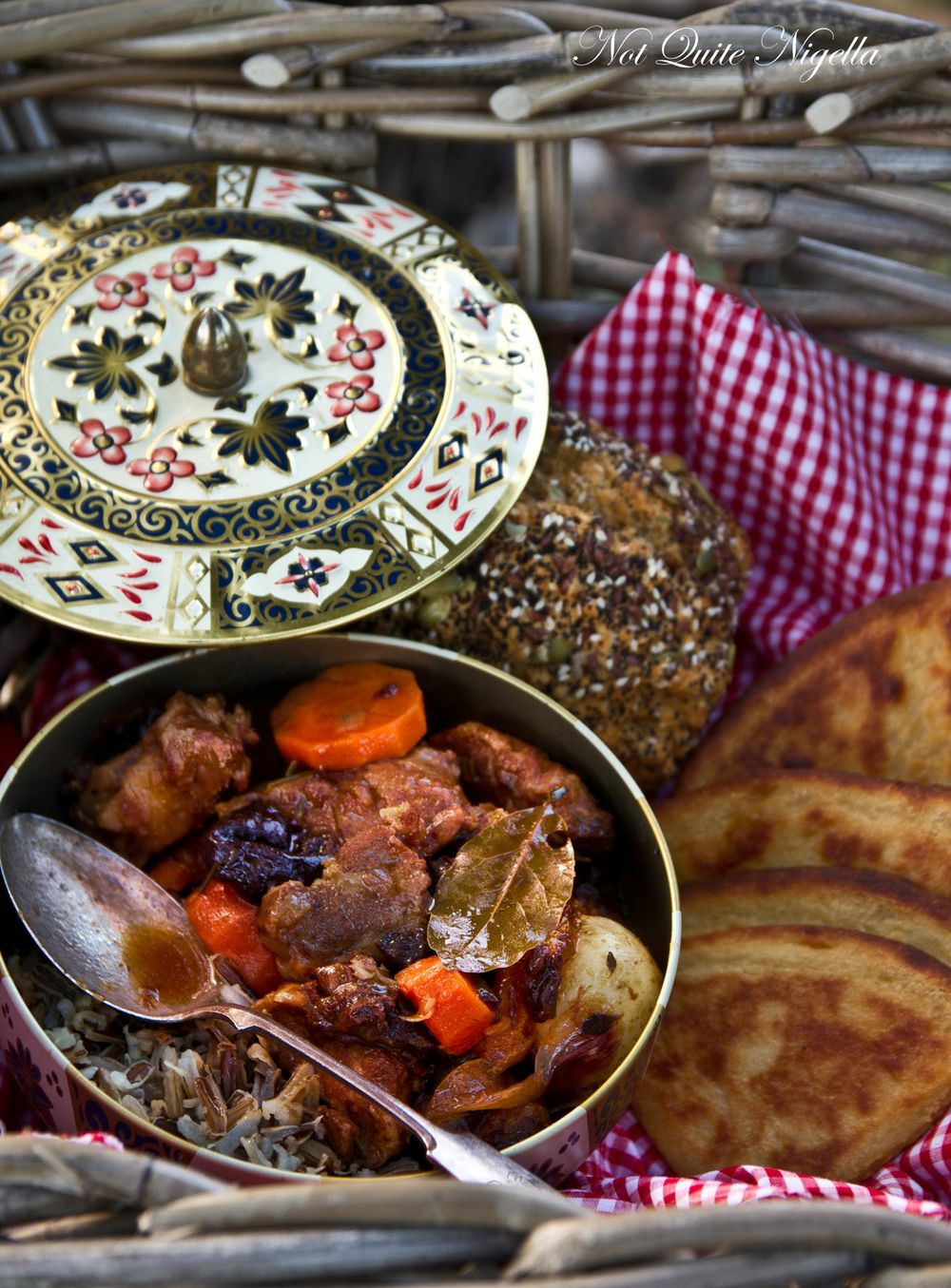