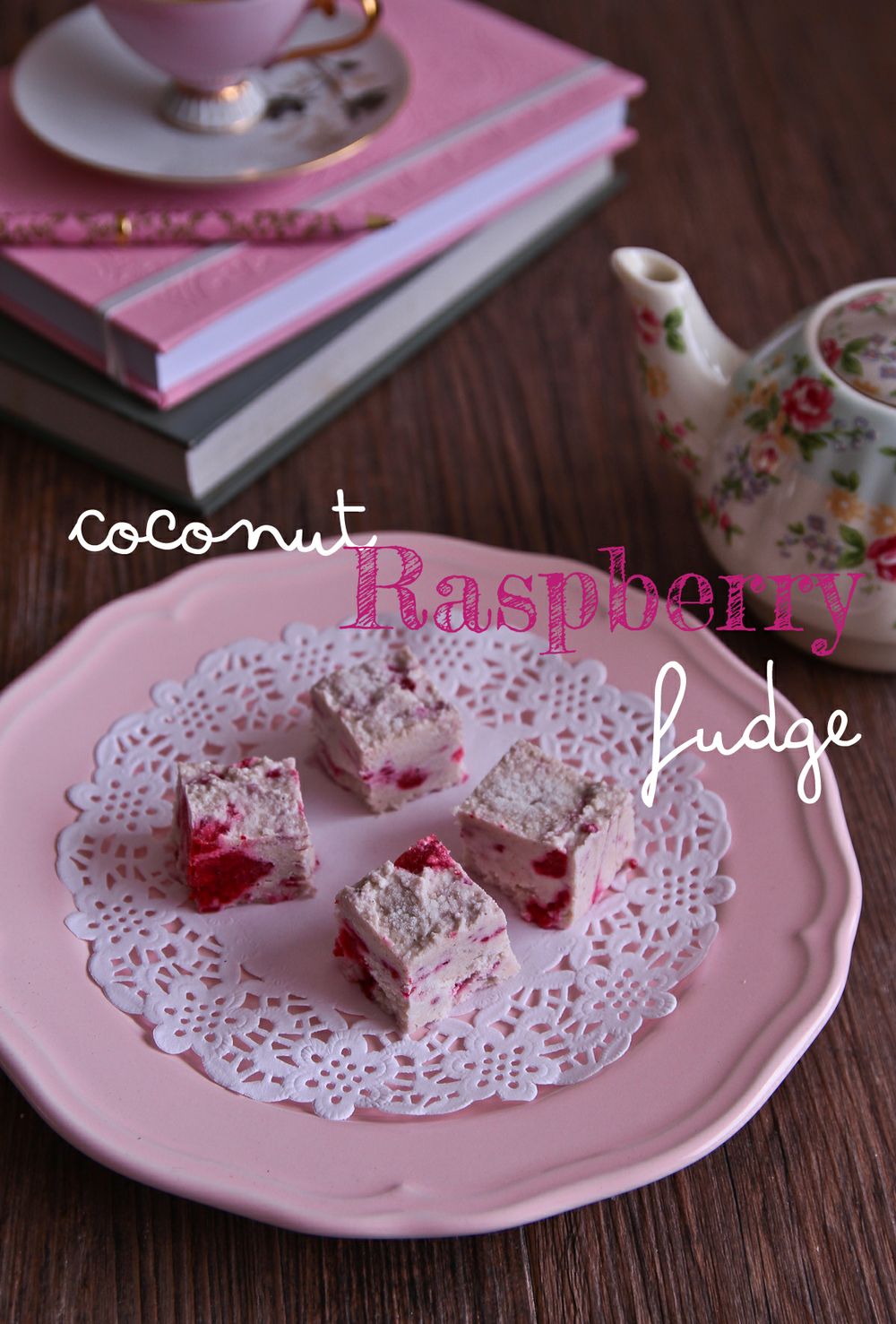 For the past few weeks, excluding the Christmas break, I've been calling Mr NQN at work sounding like a completely different person. In fact, when I call him, I sound like a parrot. I'm not sure why, but I think it was because our daily conversations about whether he needed lunch for the next day and what time he was getting home were getting routine and dull and I wanted to change them a little. So each day around lunchtime, I would clear my throat, ring his number and say in my best parrot voice "'Ello! 'Ello!" followed by "Polly Want A Cracker?"

His response depended on his mood and how much work he had on. Sometimes, there would be a big sigh edged with regret for picking up the call, other times he would speak to me as if I were a parrot calling him. This carried on for a few days until he eventually asked me why I was speaking like a parrot. I told him "I want you to get the complete parrot experience!" which I said spreading my arms and grinning widely. He looked at me as if I were a mad woman unleashed. 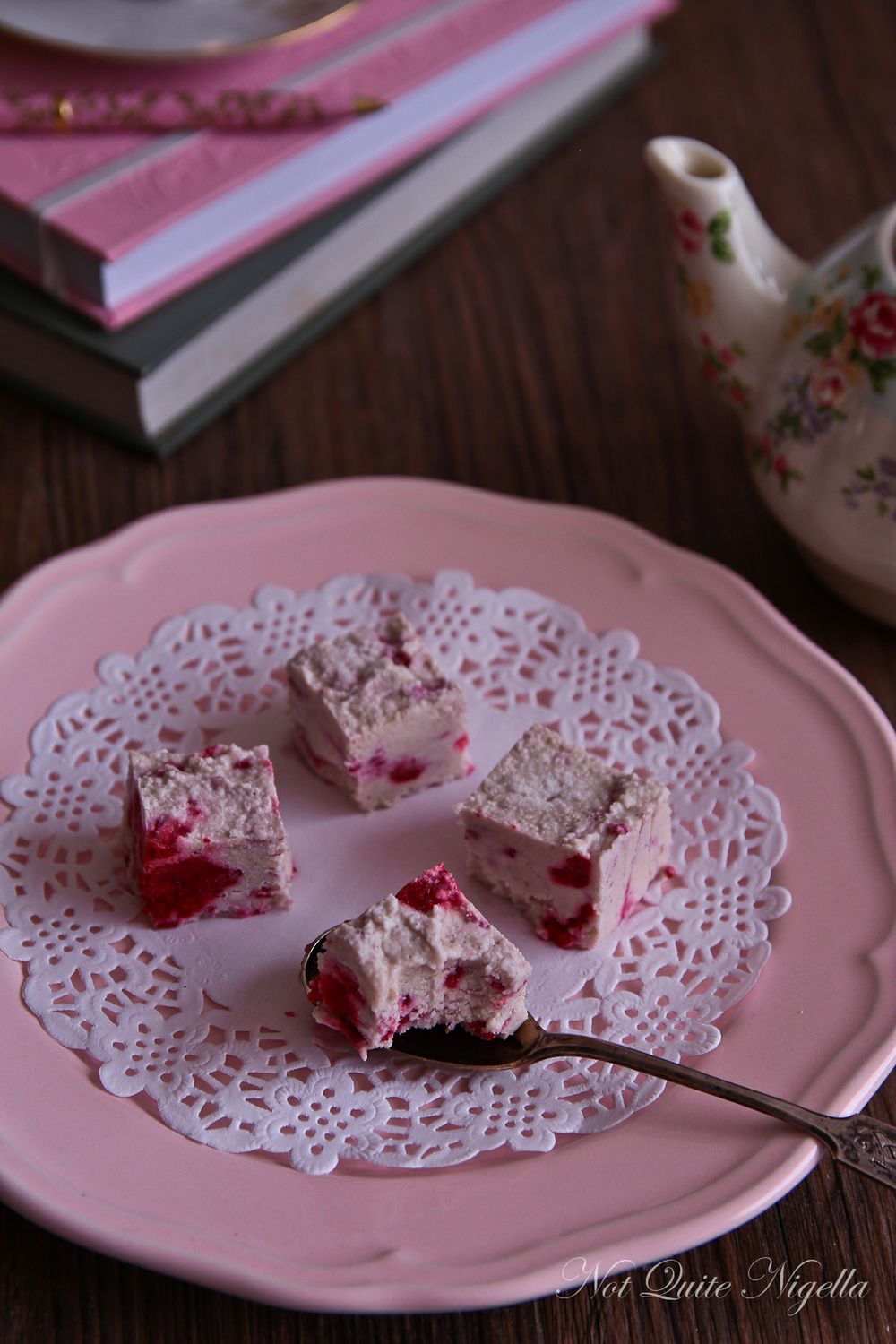 This week however, I've been quieter. No, I haven't lost my voice, but I'm editing the book again. Last year, my book didn't get published due to delays at Penguin. This year, I have been reassured that we are on track for a Mother's Day release for the last week of April! :)

Even though everything was written and sent electronically, when this final edit was emailed to me, I couldn't see any of the edits or comments. After much toing and froing, we finally ascertained that the only way for me to read the edited manuscript properly is not to read it on the computer, but to do it old skool. It had to be printed out on double sided paper, clipped together and I then write my corrections on it in pen! 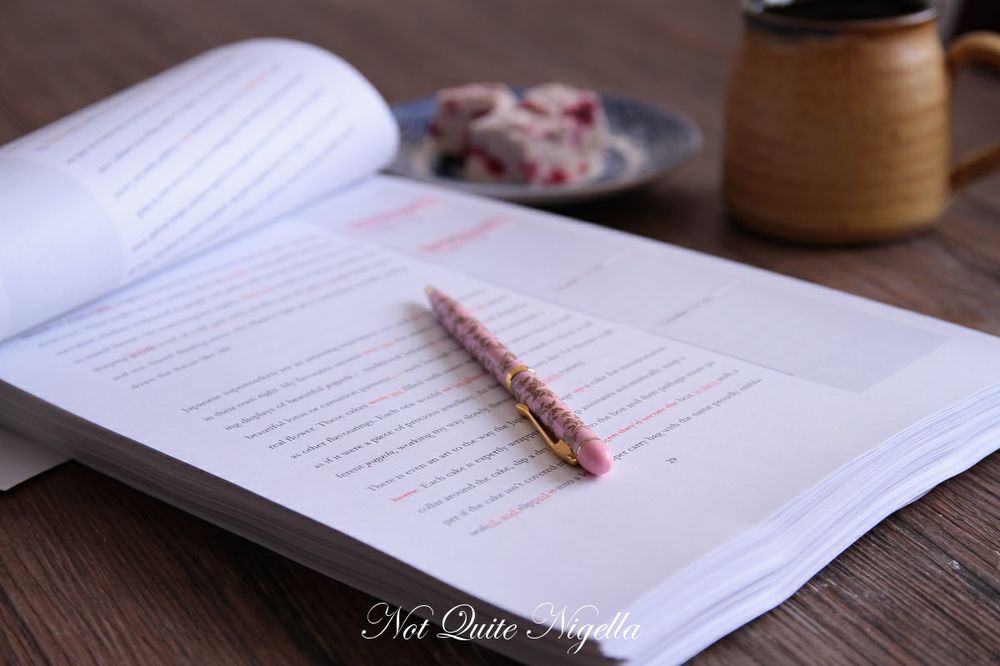 So this week, I sit nestling a cup of tea and my paper manuscript and some of this low sugar coconut and raspberry fudge. This is a recipe that was sent to me by a fellow baking enthusiast George, and she spoke of how easy and delicious it was. I had some issues with my food processor-it didn't quite get it to the creamy buttery stage but it was still really good. You will of course have to adjust your expectations somewhat - it isn't one of those tooth achingly sweet fudges where you can feel the crystals of sugar grinding on your teeth. This is a low sugar number, with just a little bit of honey (or you can omit it completely if you want to make it vegan).

It is one of those satisfying little numbers though that is perfect for some low sugar snacking in the afternoon. I call it masquerade fudge because it does just that. It's also raw and vegan and tastes quite similar to those raw, vegan cakes that you can buy nowadays but can never quite figure out how to make. Plus, I don't know anyone that hasn't made a fitness related resolution, and this will fit into any sorts of plans.

So tell me Dear Reader, are you watching what you eat after Christmas?  And are there any New Year's resolutions for you? I never make them, do you? 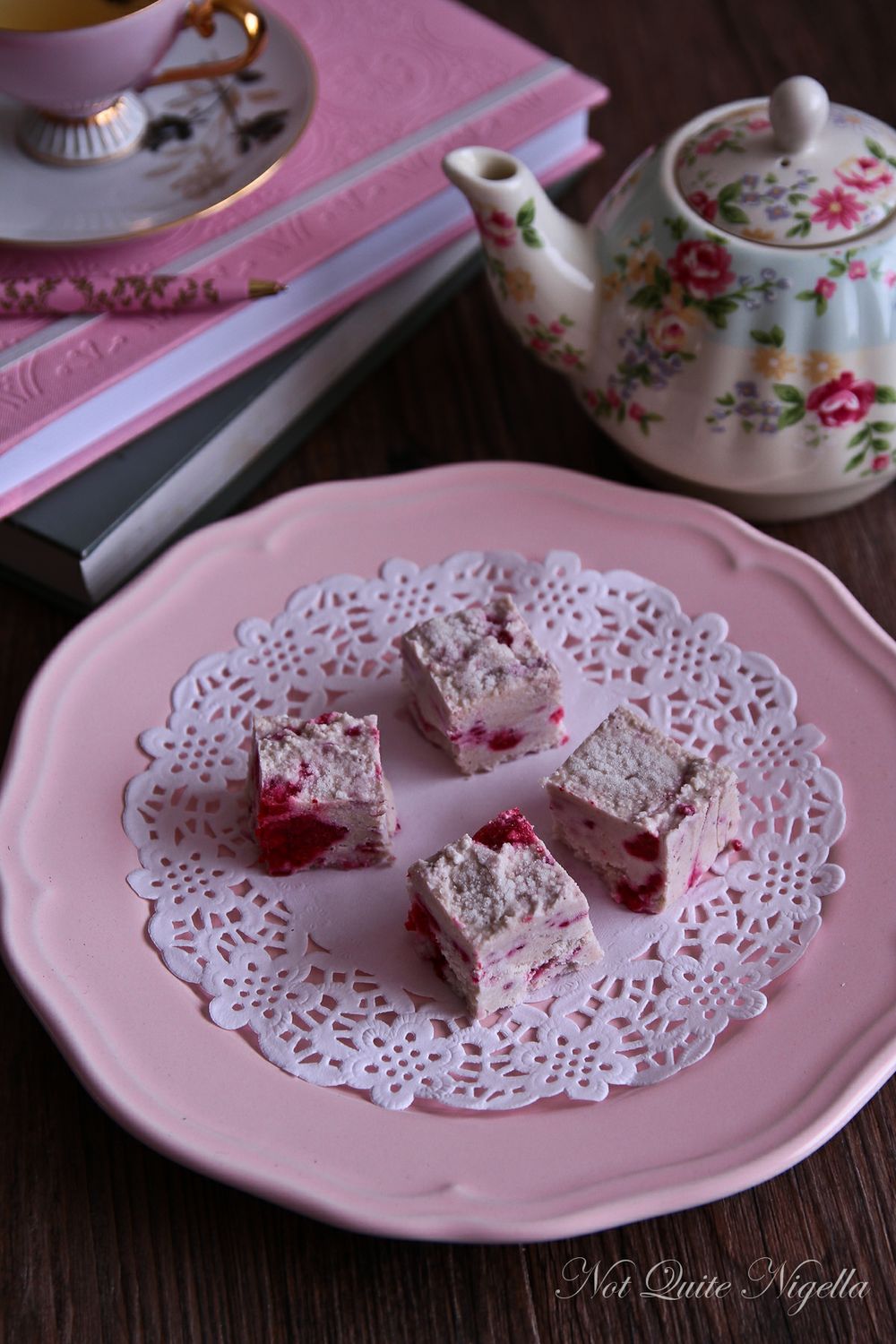 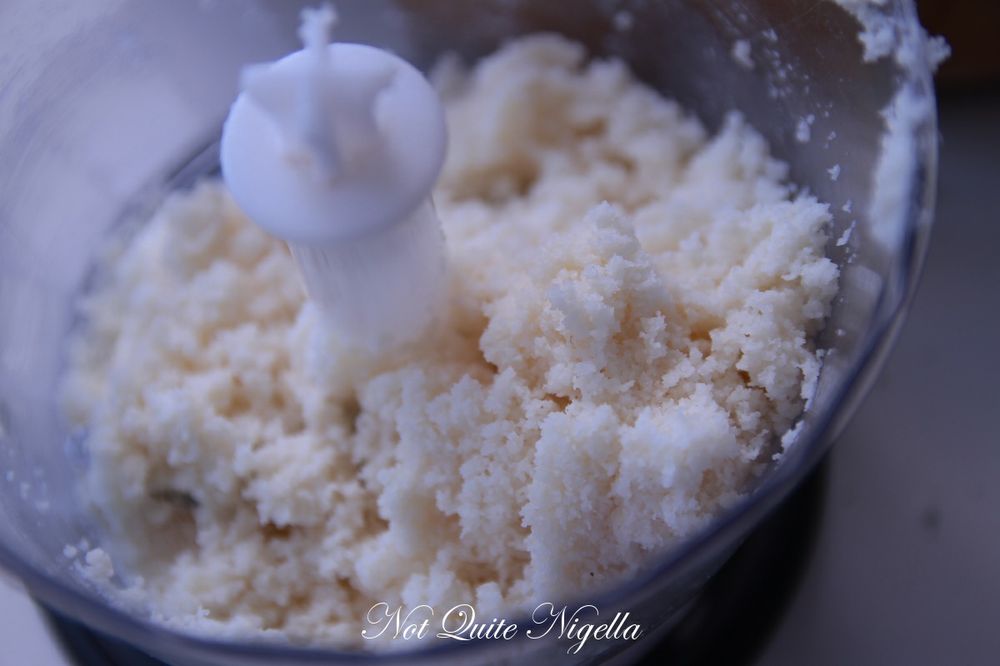 Step 1 - Place the coconut in a food processor. I have a regular food processor and it took quite a while. You will want to get to a coconut butter stage-those very new food processors get there is about five minutes but a regular one will get there in ten minutes with some water added to help it along. Just be sure to stop after two minutes each time to stop burning out your motor. 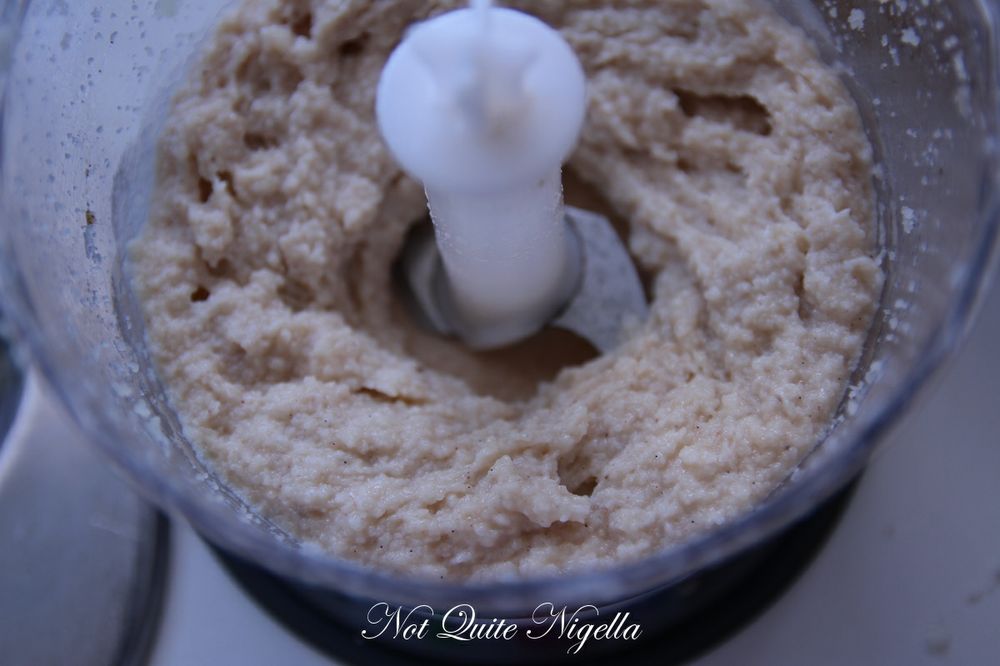 Step 2 - Once you get to a nut buttery stage (mine still had bits of coconut in it), then add the banana, honey, vanilla and cinnamon and pulse until blended. Remove the blade and stir in the raspberries. 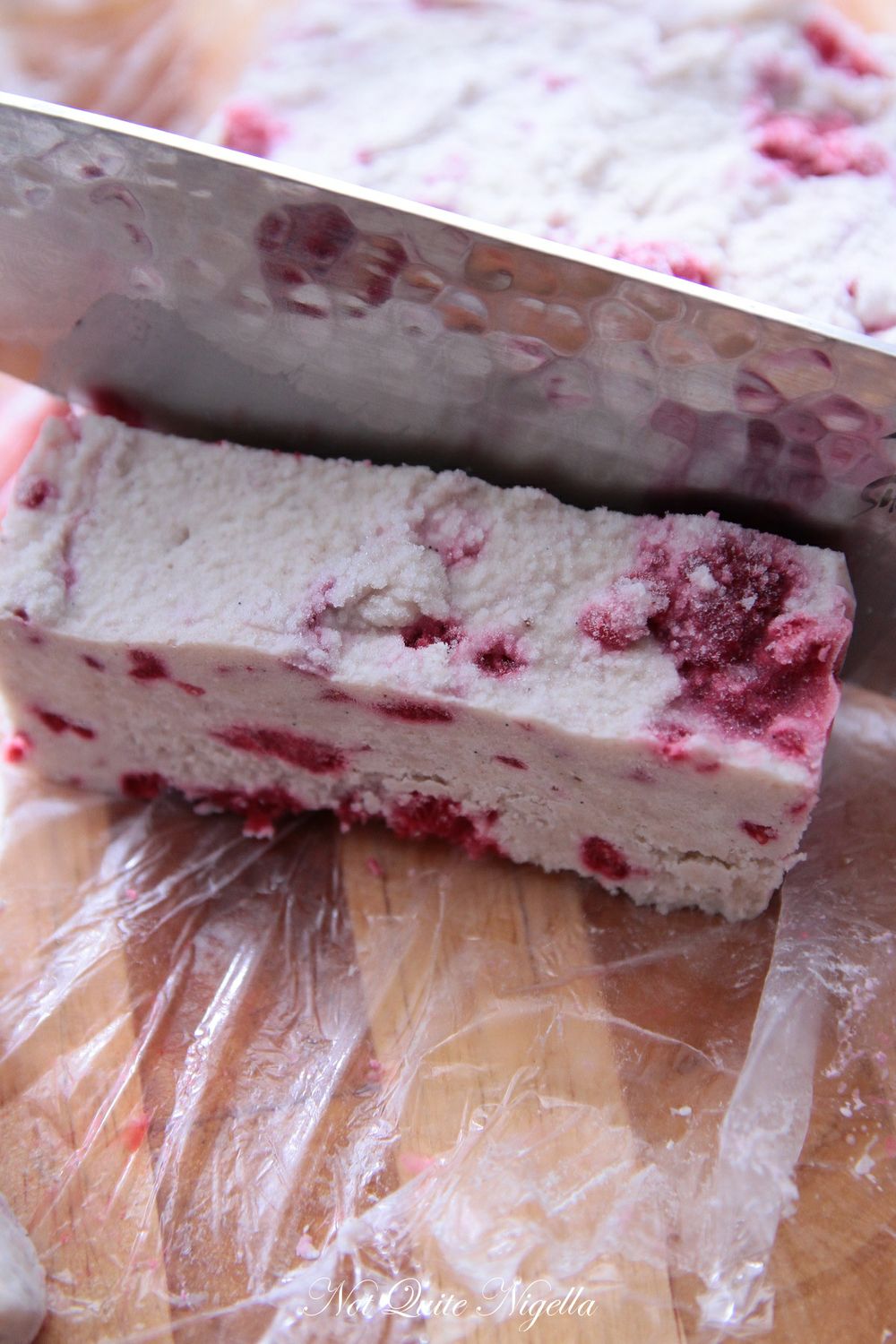 Step 3 - Line a plastic takeaway container with cling wrap and spoon the mix into the lined container. Freeze for about 10 minutes or you can leave frozen,cut into pieces and then thaw out for about 20 minutes. 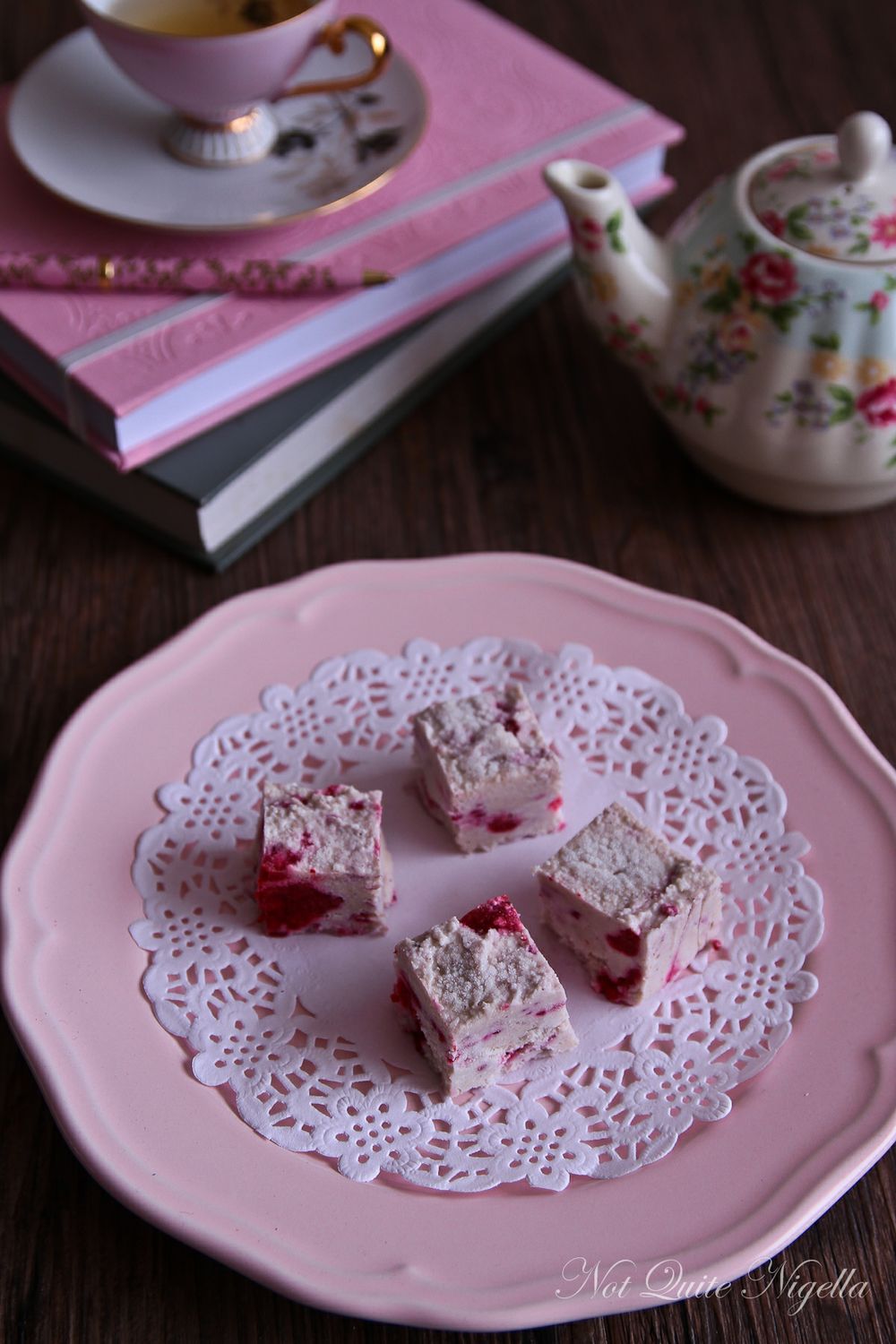