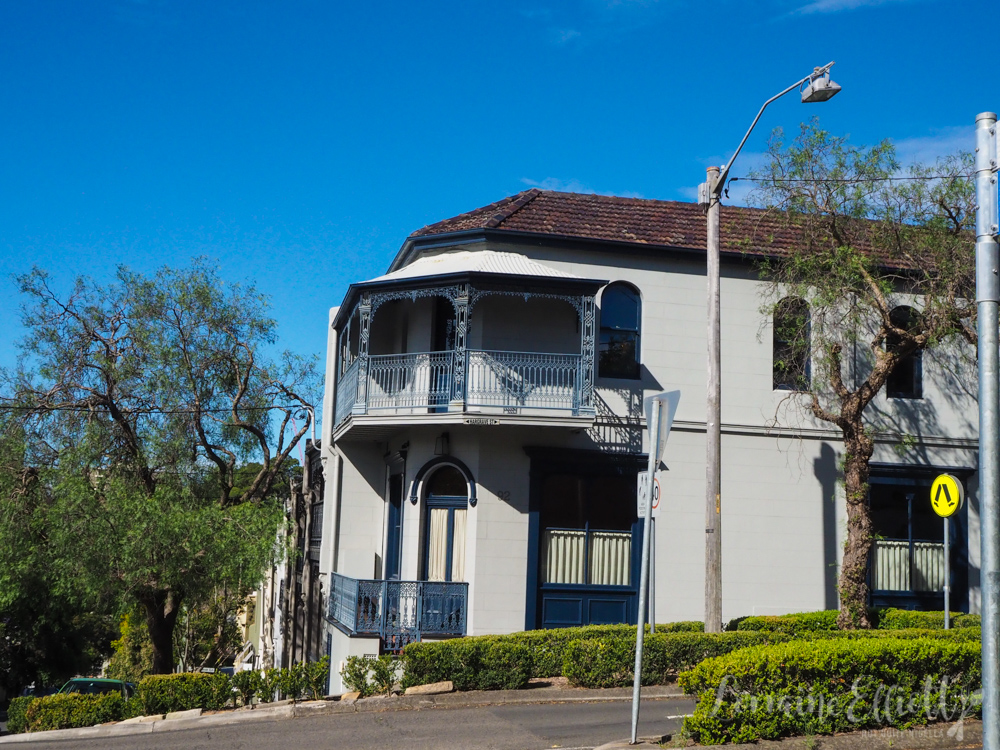 Ursula's is a new restaurant in Paddington. It's a comfortable space with a neighbourhood bistro vibe that feels right at home in Paddington taking up residence in the same building that housed D'arcys for 40 years as well as Guillaume. It's a menu with many nods to retro Australian classics made with local produce. 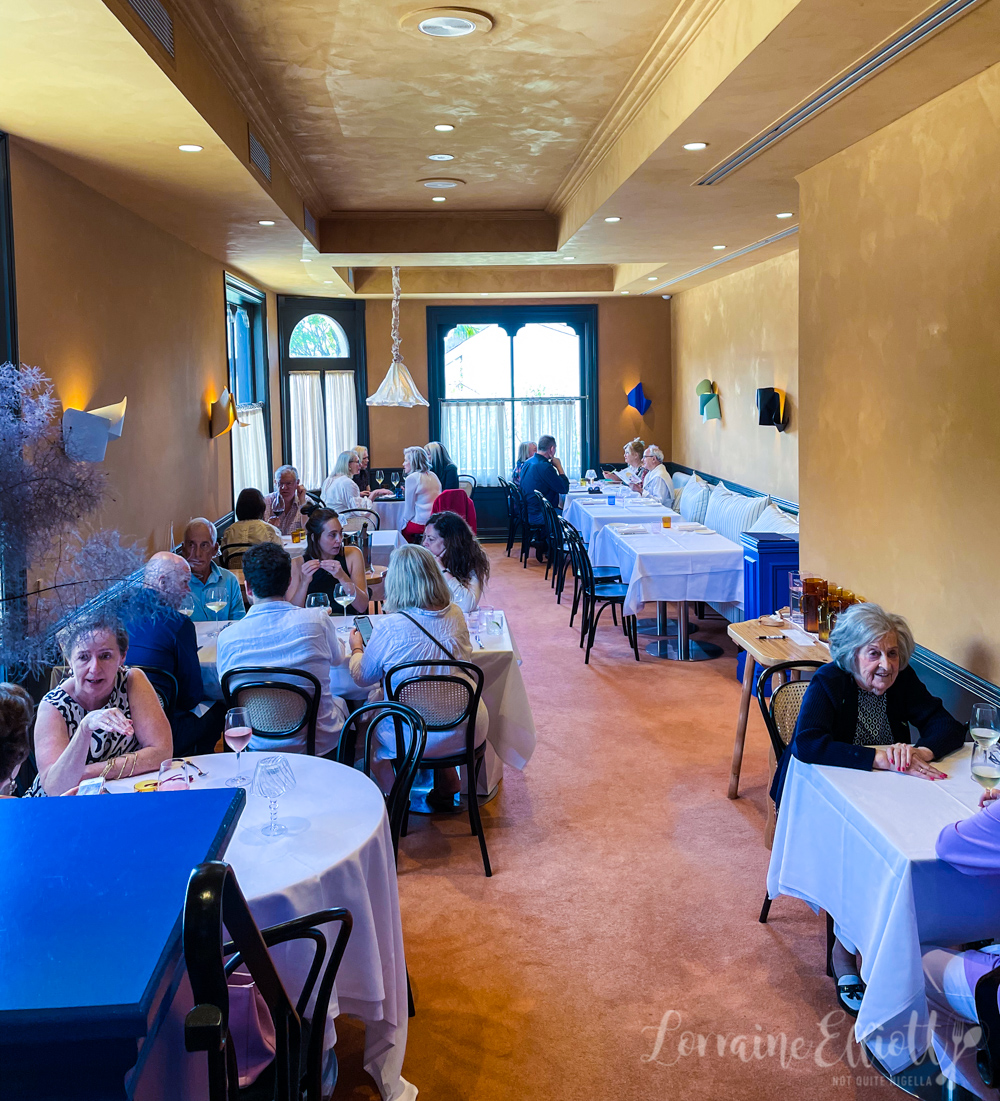 Soraya and I have a 2pm booking at Ursula's - tables can be a challenge to get at Ursula's although to be fair a lunch booking in December is a rarity in the weeks preceding Christmas. The restaurant décor is predominantly hues of apricot, strong blues with white tablecloths and bentwood chairs. The tones are quiet and I can imagine my parents liking it here because it isn't noisy or buzzy. My friend who visited a few weeks prior described the food as "unfashionably conservative" but gushed about how much he loved it along with the not noisy room. There are two levels in the restaurant, ground floor and upstairs and we are seated on the ground floor. 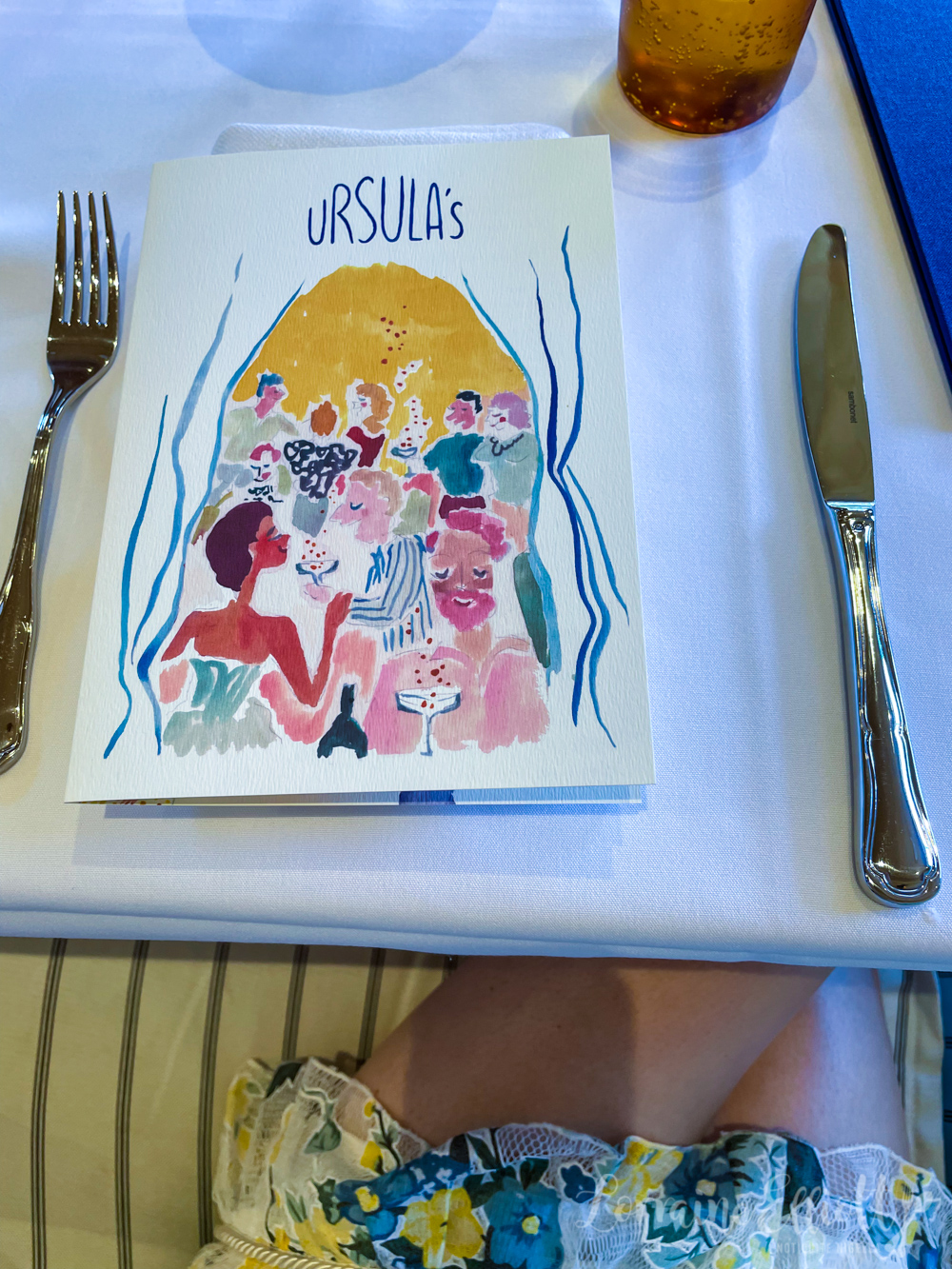 Ursula's owners are chef Phil Wood and his wife Lis Davies. He was formerly the chef at Rockpool and Pt Leo Estate in the Mornington Peninsula. And today he isn't in the kitchen but is on the floor ferrying dishes to diners and taking orders. The other waiter, a no-nonsense guy mumbles something about "Sydney and service," and we have to assume he means the hospo staff shortage. We are seated at a table for four along the banquettes and I sink down in on the banquette side. They bring over a little lamp and place it down with ceremony but this remains off for the lunchtime meal. Ursula's is named after a family member who many years ago lived on Jersey Road in Paddington. 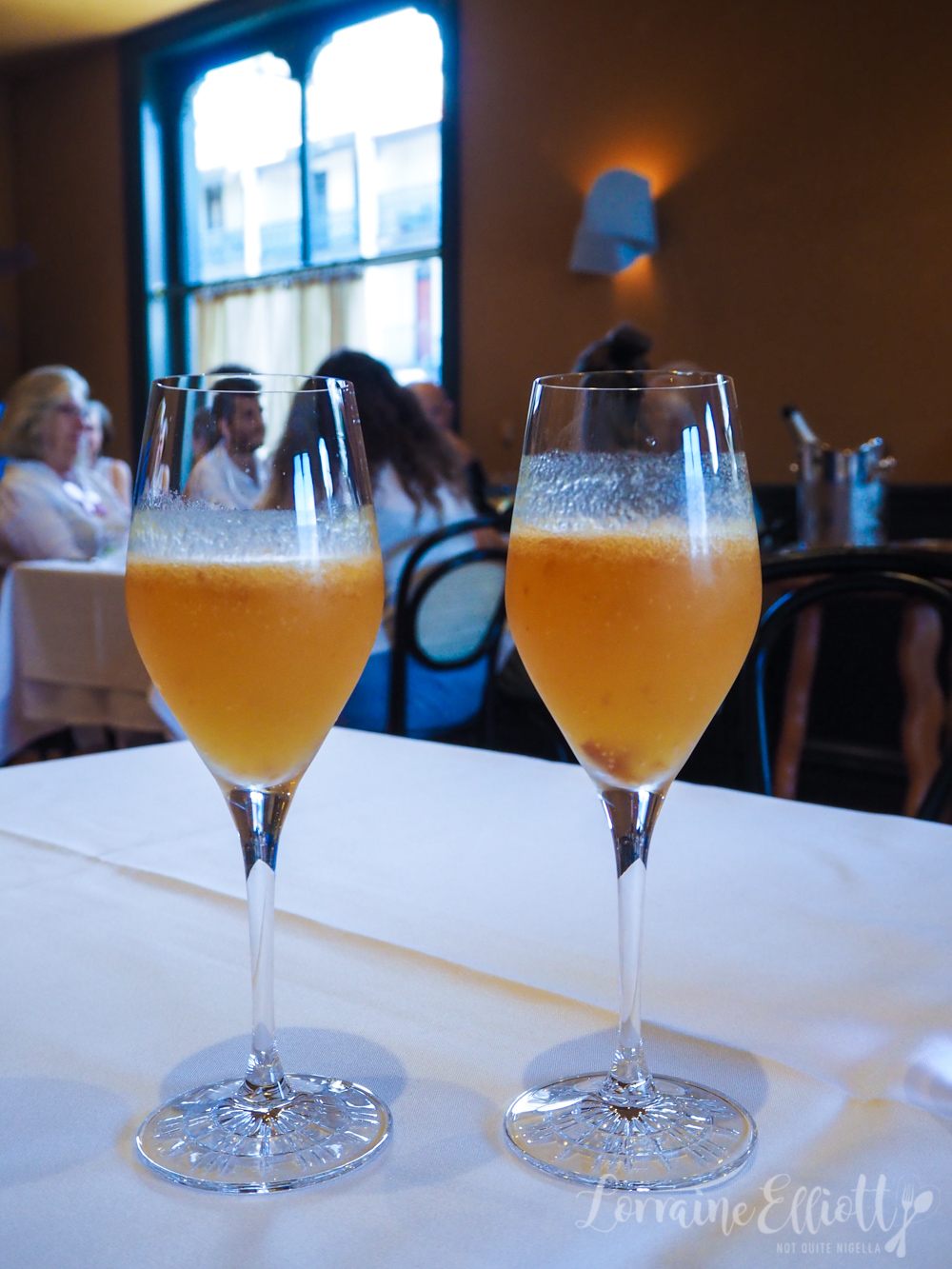 The cocktail menu is made up of classic selections rather than original cocktails. This lunch, rendered an annual event because of COVID, is a celebration of milestone events in our lives so it's cause for a celebration. The peach bellini is made with fresh peaches, skin and all and prosecco and is actually less peachy than other peach bellinis that we've had, perhaps because of the use of fresh peaches rather than peach juice. 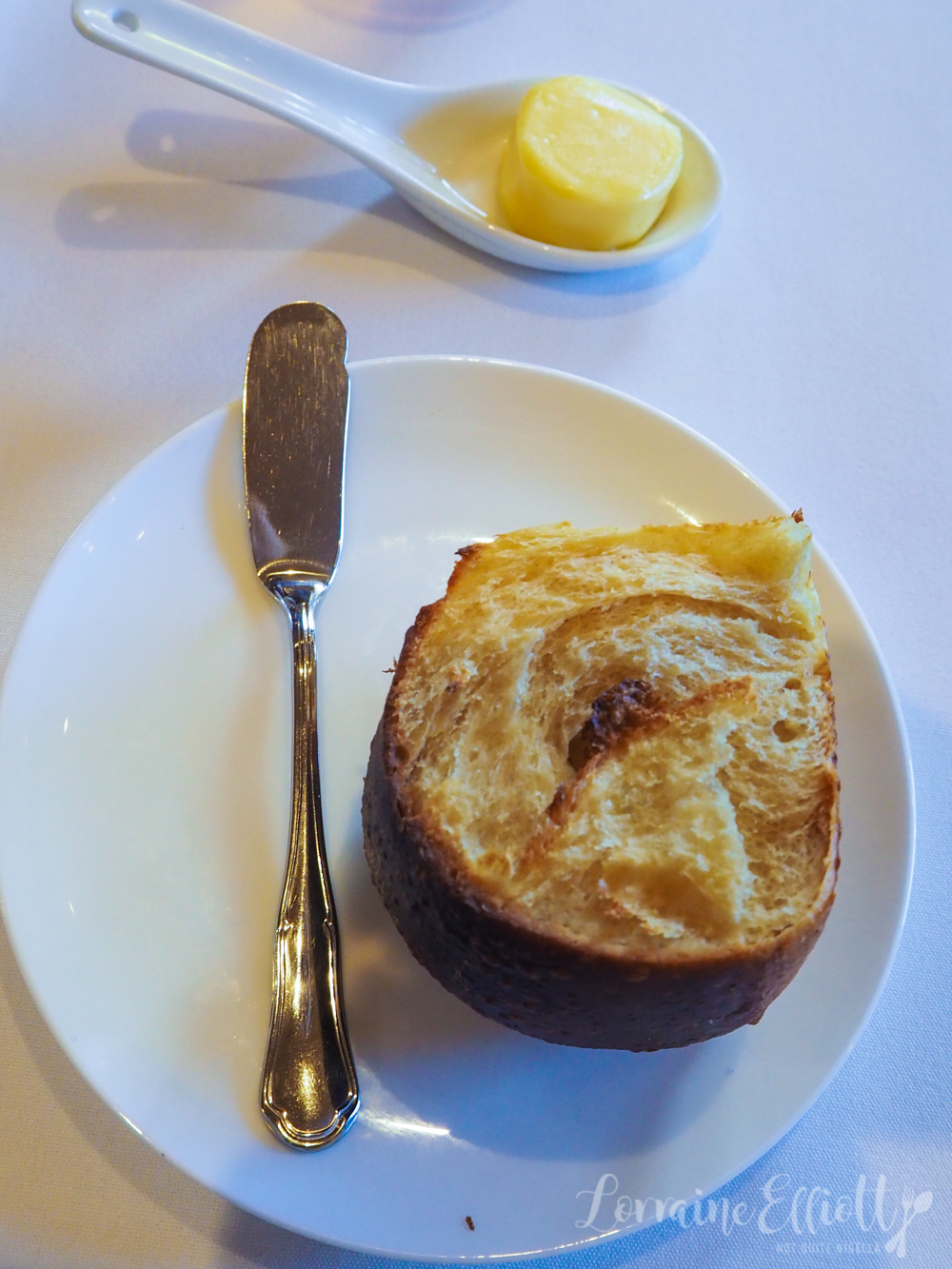 Olive oil brioche and butter $7 each

We start with the bread that is an olive oil brioche made from soy milk. This house-made roll is served warm from the oven and everyone gets their own individual butter to spread from. It's awfully good, with a trademark slight sweetness to it too. It's worth saving some for dipping in the sauces. 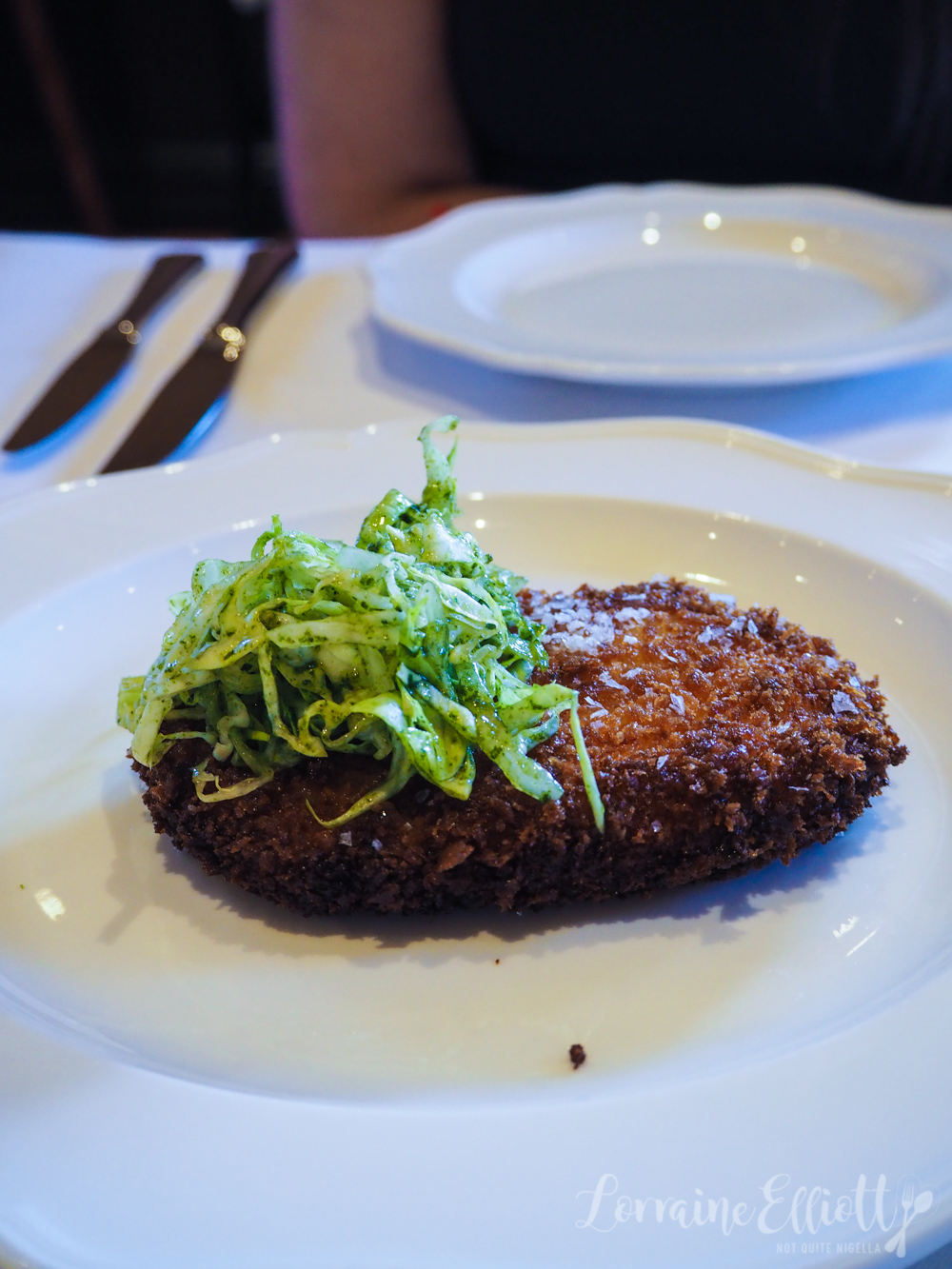 I'm not sure if it's bad luck but I don't get a single mussel in my half of the mussel schnitzel so mine is more a study in hope and potato croquette. The idea is great however - mashed potato and mussels crumbed and deep fried. Soraya gets a couple of mussels in her half. It's served with a green goddess dressed shredded iceberg lettuce and a Marie Rose sauce. 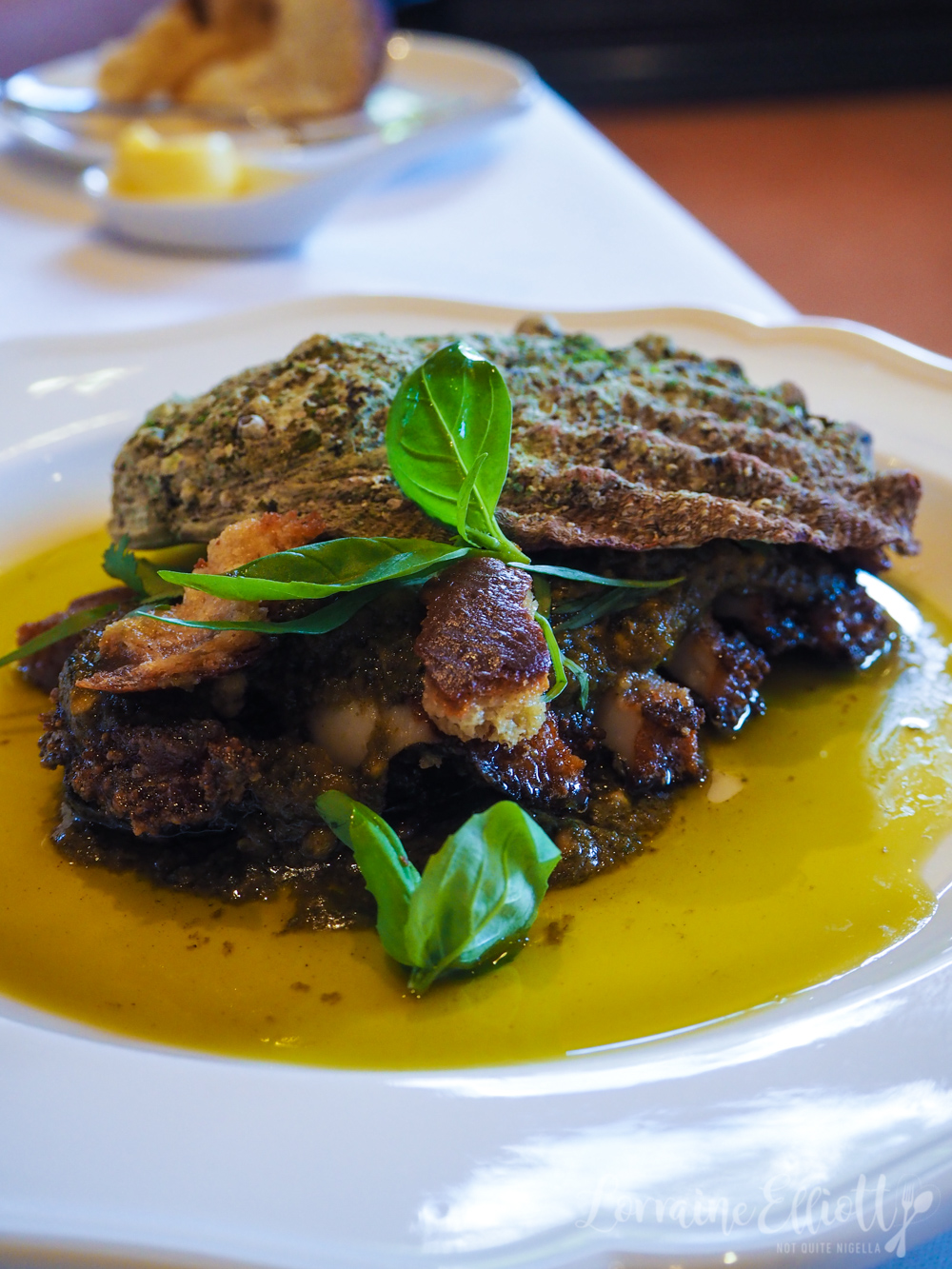 The abalone was a special that Phil suggested and he sold it to is so well so that Soraya who hasn't ever tried abalone and me (who thinks that it's nice enough but not usually worth the cost) is convinced that we have to try it. The South Coast abalone is tenderised, dusted in flour and then cooked in butter and a drunken condiment with Shaoxing cooking wine, ginger, shallot, lemon juice and basil with chunky brioche croutons. Usually abalone is cooked until quite tough but this is so tender. And as soon as I see that slick of herbaceous oil I grab some of the brioche to mop it up with. If this is on the menu, it's definitely worth ordering and this is one of my faovurite courses of the meal. 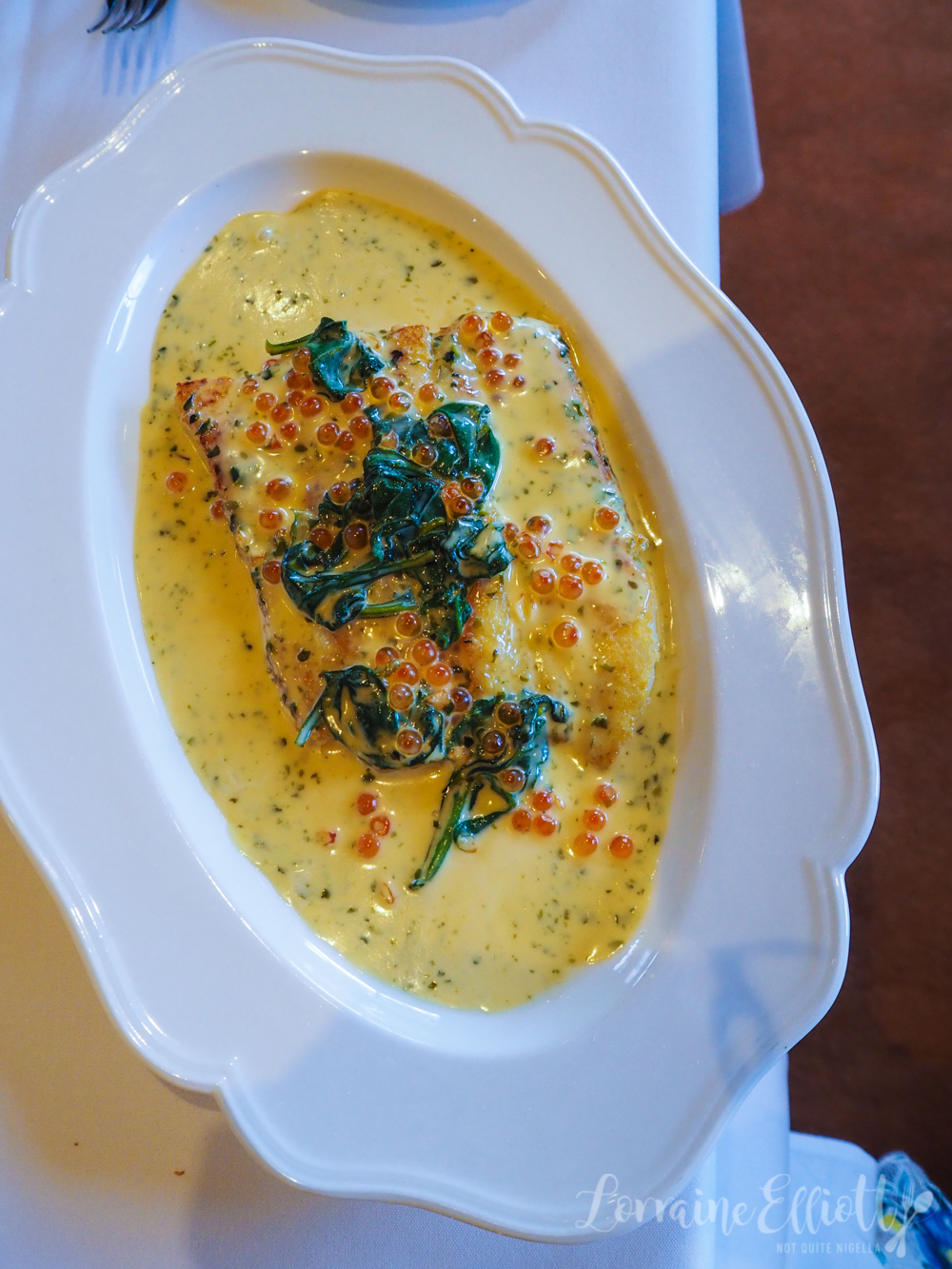 The two mains come out shortly later. The coral trout fillet is served with wilted Warrigal greens, a generous scattering of trout roe and a butter cream sauce. I would recommend perhaps having some mash (if it isn't too rich and it might be with the truffle butter) to soak up that delicious butter cream sauce. The coral trout is crispy edged, albeit a tad dry at the thinner edges. 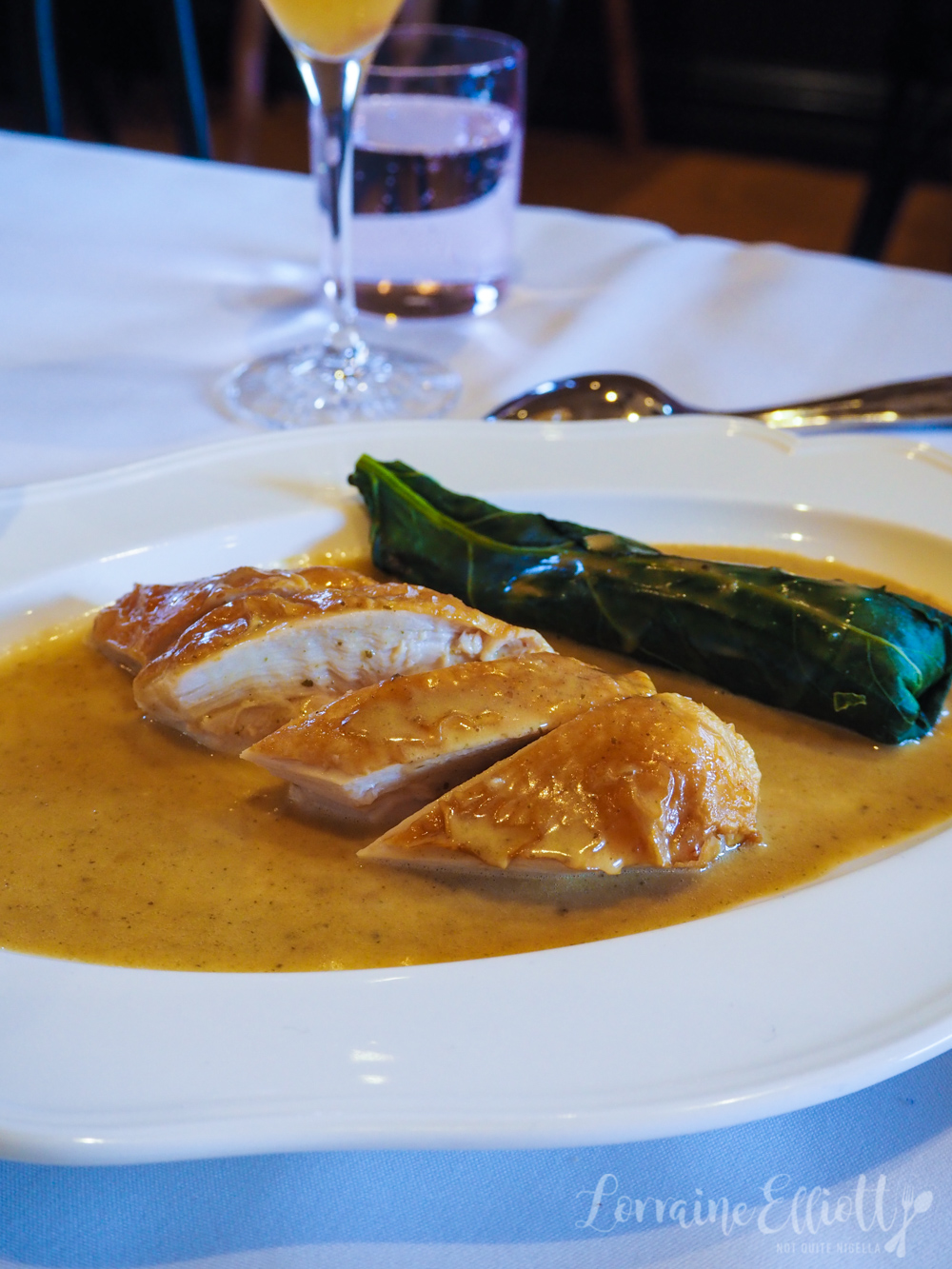 The roast boneless chicken breast is so tender that it melts in the mouth. It is served with a delightful kombu butter sauce that gives it a creamy and distinct umami quality. To the side is mushroom duxelles wrapped in gai lan. 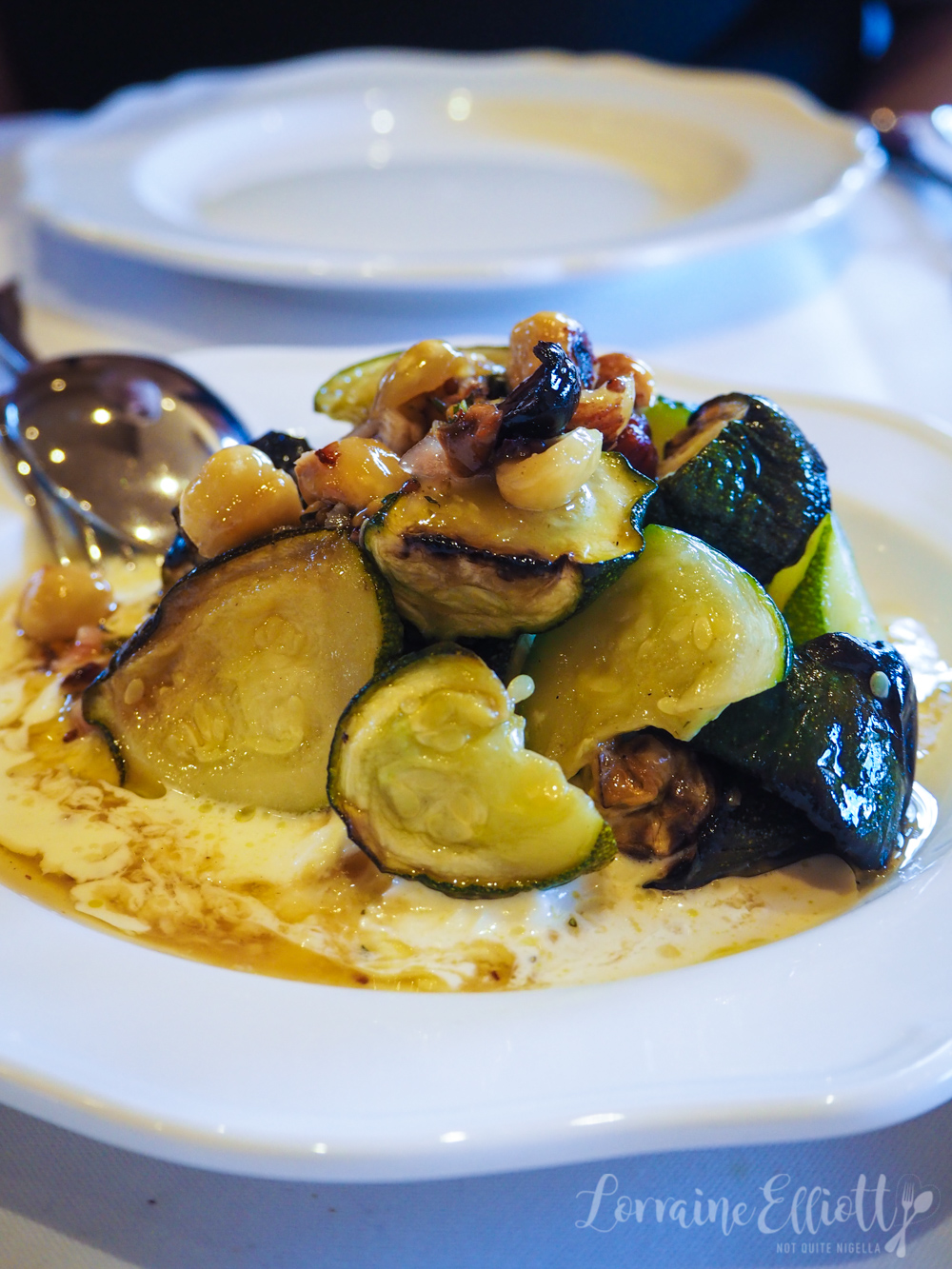 A surprise winner is the zucchini side served cold and pickled with toasted hazelnut, stracciatella and thyme. You expect certain things from zucchini, it's mild flavoured and usually inoffensive but here it's the dish that Soraya and I both can't get enough of. 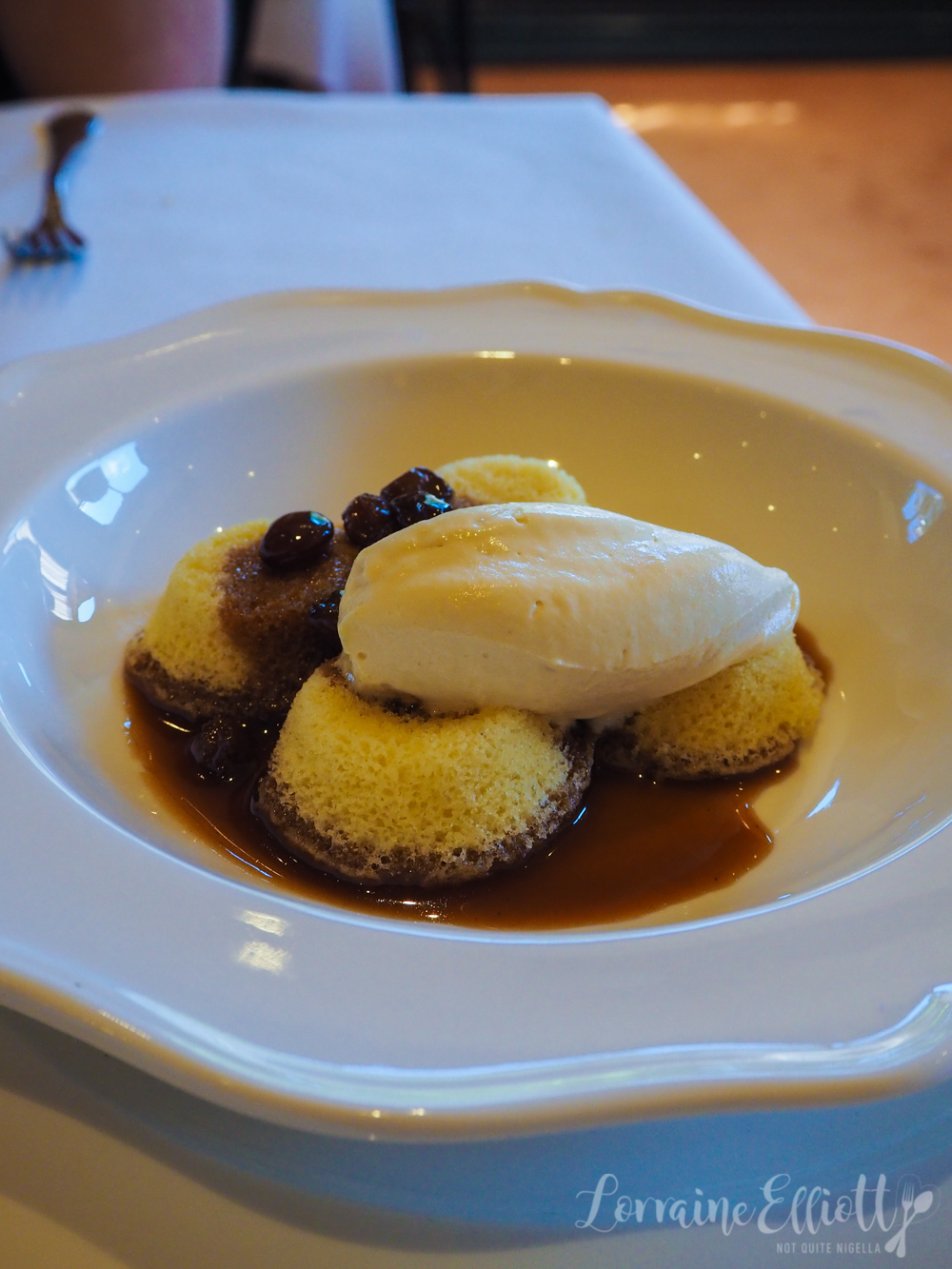 It's time for dessert and truthfully we both liked the idea of the golden syrup dumplings because we were sitting right underneath the air conditioner and were chilled to the bone. Phil describes the dumplings as "adorable" and they are four petite specimens with with macerated rum and raisins and a ridiculously good malt cream on the side. 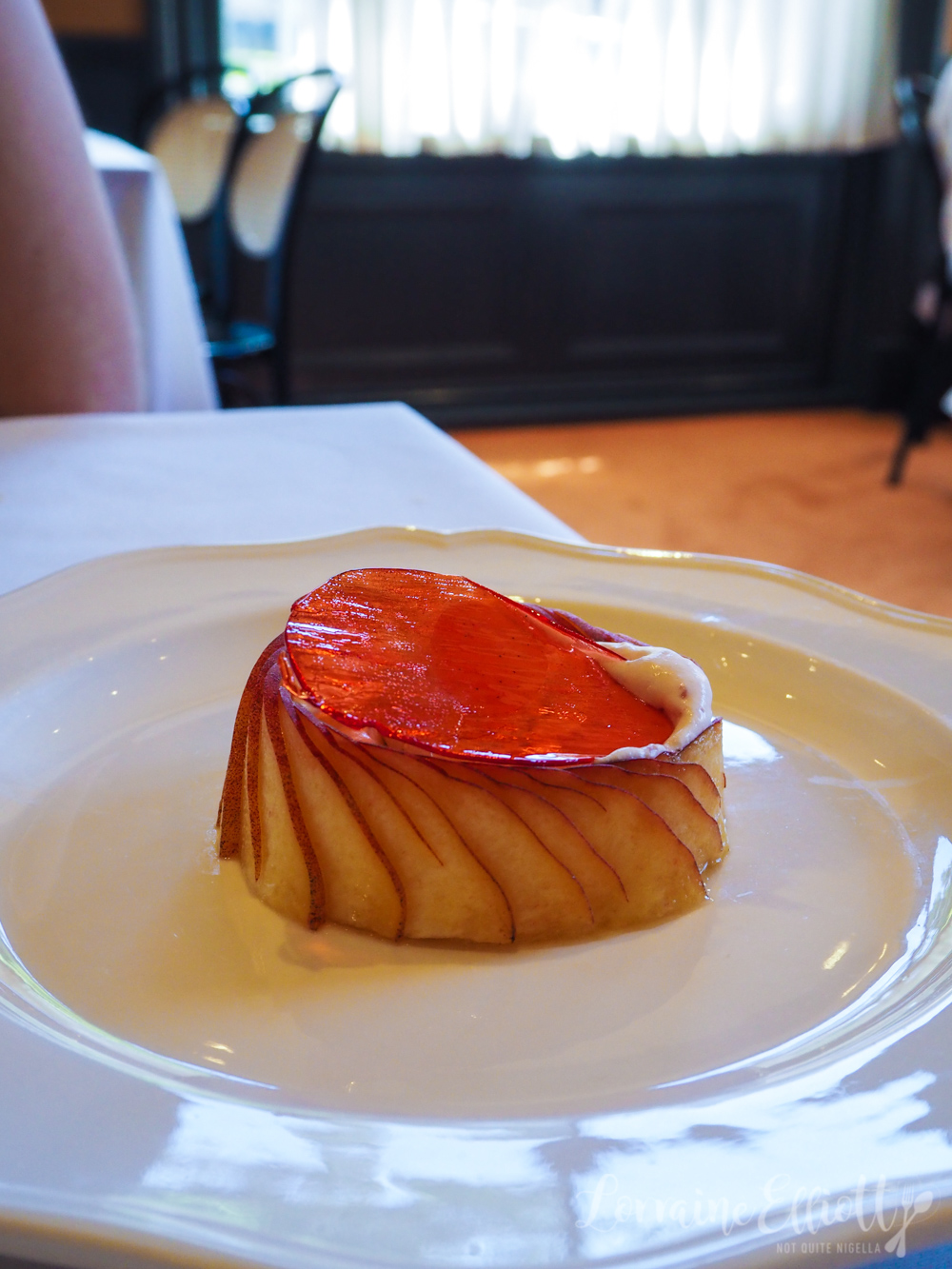 Friends had advised us to order the Peach Melba at Ursula's which is their interpretation of the classic dessert. There are thin slices of fresh yellow peach enveloping a vanilla bean ice cream with raspberry syllabub and a disc of toffee that we shatter like the top of a crème brulée. The key feature of this dessert and the above one is how beautifully light they are, as though they could float away like a feather if they were not tethered to earth.

So tell me Dear Reader, do you have a favourite neighbourhood restaurant where you live and why is it your favourite?