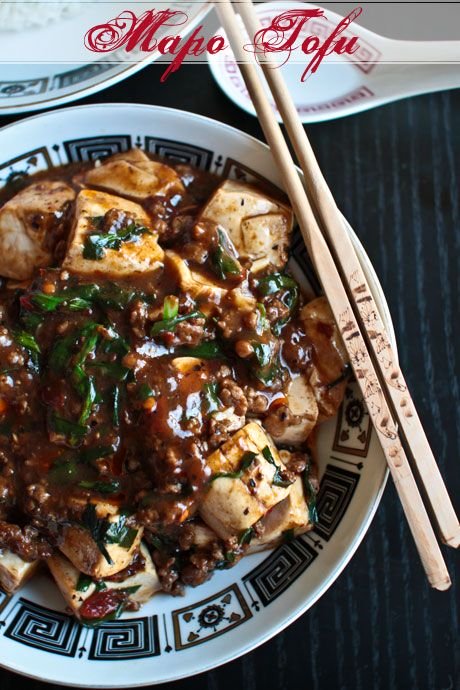 I was about eleven years old when my parents looked at me startled and then gasped, clutched their hearts and made a phone call.

"She can't speak a word of Chinese" they whispered to each other aghast. Back when we were babies to toddlers, each of us had one grandmother helping my mother. My grandmother, the one whose temper I inherited apparently, would speak to me in Chinese and my parents would speak to me in English. I think they figured it would keep it at a happy medium. I remember speaking a complete mish mash of the two languages with a sentence containing half English and half Chinese words and thinking "I hope they understand what I'm saying because it sounds a bit strange." 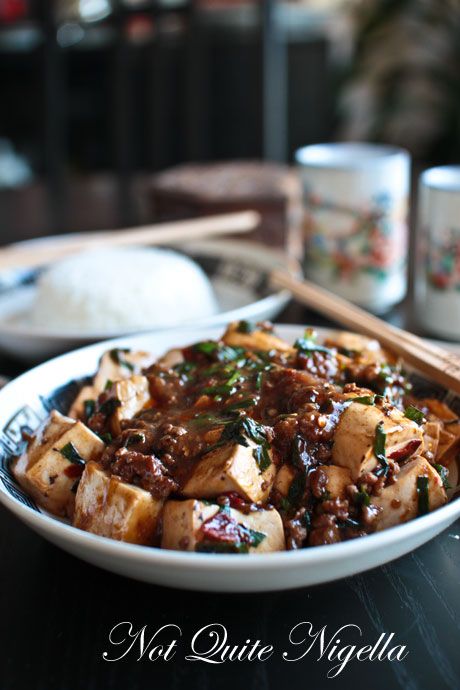 Then each grandmother moved back to their countries and in their efforts to get my sister and I to assimilate into Australian culture they only spoke English to us. My parents spoke Chinese to each other (and only when they didn't want us to hear what they were saying). And I lost the strange mish mash of the two languages that I spoke and turned from bilingual to monolingual. Post haste at eleven years old they signed my sister and I up for Chinese lessons. I remember going to the class and groaning when the teacher told us that Chinese was made up of thousands of characters and we would have to learn each character by heart. "And Lorraine, knowing 1, 2 and 3 are good but you'll have to learn more."

I gulped and put my head in my hands. Where was the 26 character alphabet? I was convinced my limit was 26 characters thankyouverymuch. Sadly I never quite got the grasp of speaking Chinese. To her discredit, she didn't teach any of us wayward children Chinese - and this included my sister who was dux at school so she was as good a candidate as any. But I_ now_ really wish I had tried harder and given it a better go. Alas Mr NQN now speaks more than I do (although his is slang Cantonese that comes from being expatriated to Hong Kong for a few months for work). I do know some restaurant menu items although my pronunciation is woeful and there are so many inflections that I often get blank looks. 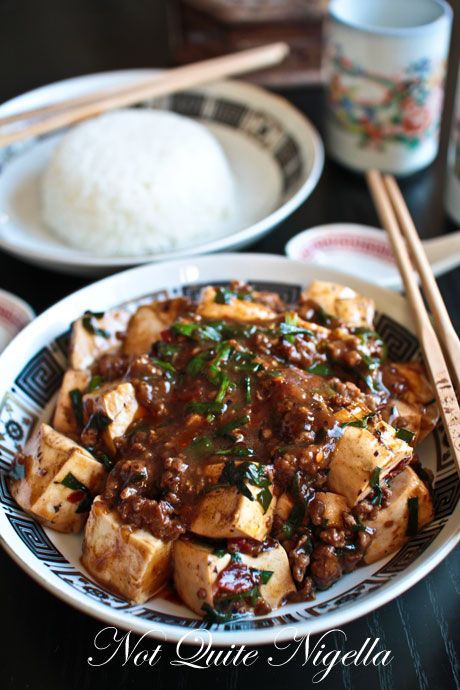 One of my favourite Chinese dishes is one that I've had a complete resurgence of love for recently - mapo tofu. I've had bad ones and I've had sublime ones. The most sublime being the one served at the Iron Chef dinners, the last one held in Melbourne. There Iron Chef Chinese Chen demonstrated his famous dish - it was the dish with which his father introduced Szechuan cuisine to Japan. Salivating and inhaling the spicy aroma we tried it and it was deep, rich, spicy and swoonworthy. Oh and spicy, after all it is Szechuan cuisine.

On each table at the dinner was a printout, in Japanese of the partial recipe. I couldn't read it but then when I did a quick search to see whether anyone had translated it I found Iron Chef Chen's Mapo tofu recipe all nice and translated! And from watching him demonstrate it, it looked very much like the recipe he had shown us. So I made it with my mother (who has now given up on me learning Chinese). A lot of the work is in the prep and once you had a spice paste and stock mixture prepped and the tofu parboiled in water, then it is literally 10 minutes or less in a hot wok.  It is spicy and not for the faint hearted-we followed this recipe and it was the same heat as what we had at the Iron Chef dinner which is very hot indeed. If you want to cut out the chilli you could perhaps use less chilli oil and less dried chillis but part of the fun is huffing and puffing and then getting a soft morsel of pillowy tofu to soothe the palate.

So tell me Dear Reader, do you speak another language? And is there a language that you'd like to learn? 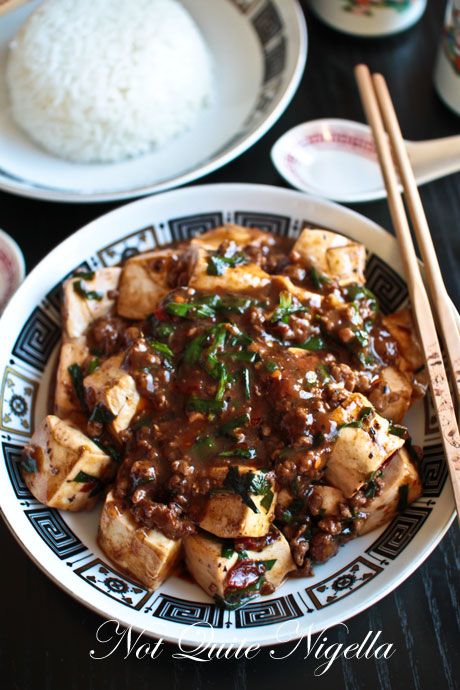 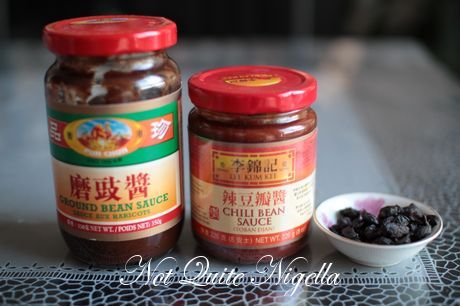 The two sauces and the fermented black beans

Step 1 - Cut tofu into cubes-the recipes says 1 inch cubes which we did but I prefer slightly smaller ones. Heat a saucepan of water and add the salt and tofu pieces gently. Bring to the boil and then reduce heat to medium high for 8-10 minutes and then remove from heat and drain gently. 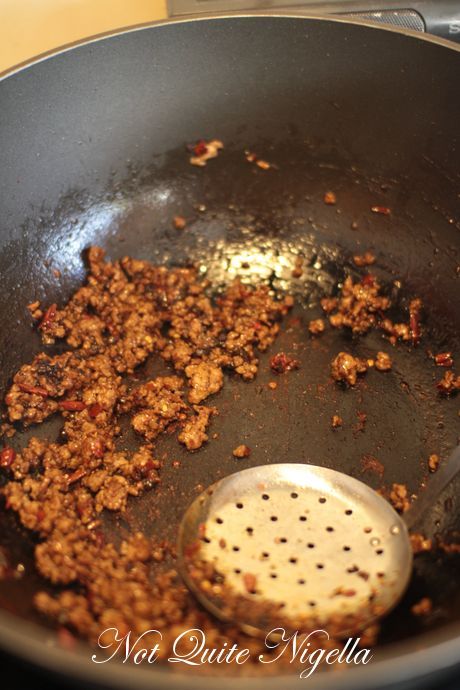 Step 3 - When the tofu is done, heat a wok on high and add the oil and swirl to coat the pan. Add the pork and brown, stirring carefully to separate. Then add the spicy bean paste above cooking for 1 minute.

Step 4 - Then add the stock mixture as well as the tofu pieces. Stir fry very gently for 1-2 minutes. 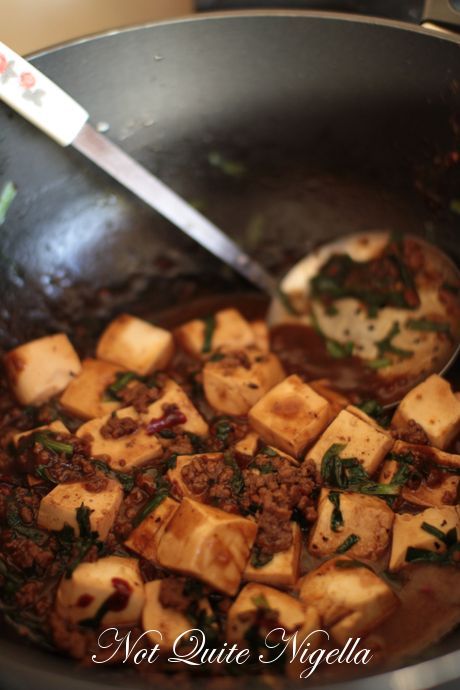 Step 5 - Take the wok off the heat and cool for a minute so that the sauce isn't bubbling. Add the cornstarch and stir very gently. Drizzle with sesame oil and serve with Szechuan pepper if desired. But don't forget the rice! It wouldn't be the same without it :) 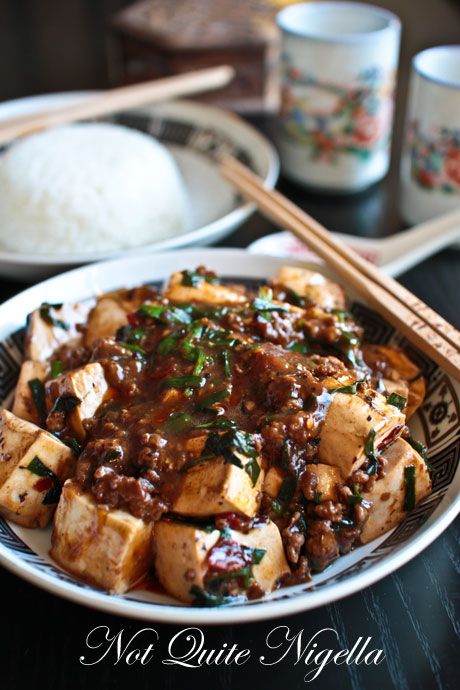