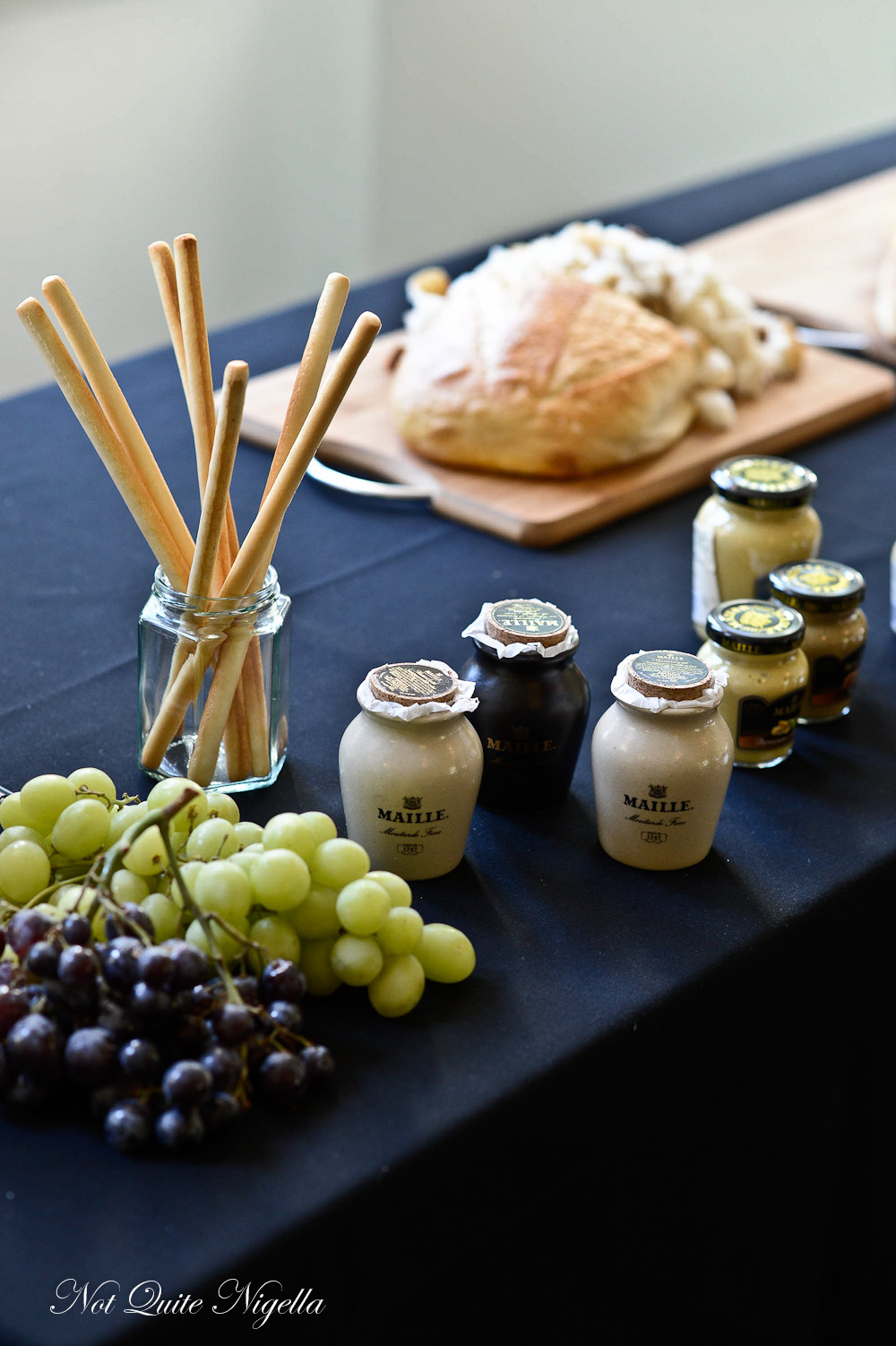 For a country as small in population as Australia, apparently we Australians love mustard. So much so that we are the sixth most popular export country for Maille (pronounced "my") mustards after the U.K., Canada, Germany, Japan and the United States. And just three days ago, the Sydney suburb of Mosman opened the fifth Maille mustard boutique opening in the world. 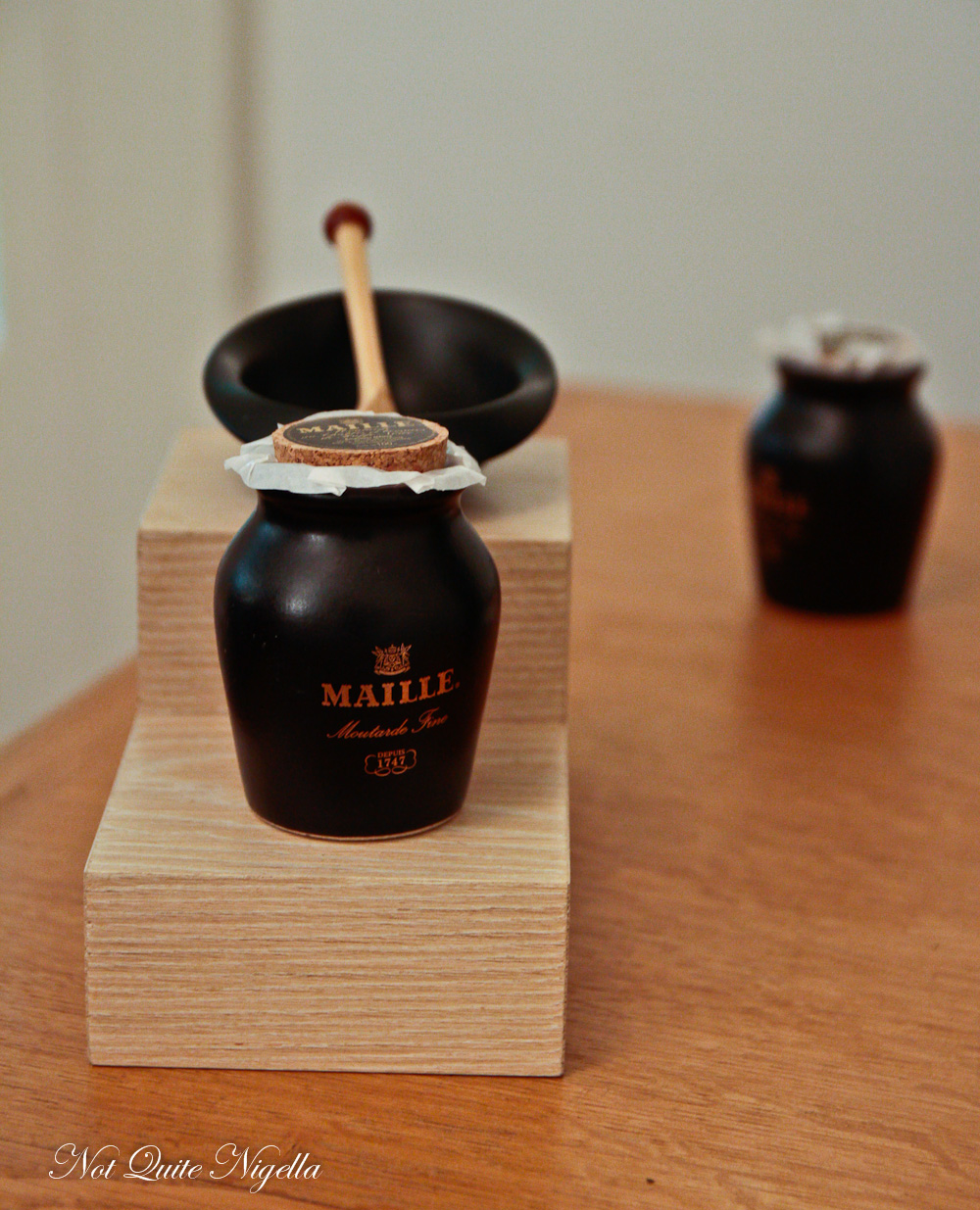 The history of mustard is a fascinating one. The Romans were said to be the first to mix mustard seeds with grape must (hence the name must-ard). The story of Maille starts in 1720 in Paris. However sales of mustard flourished during the plague when Antoine-Claude Maille sold Vinaigre aux Quatre Voleurs” (Four Thieves Vinegar relish) for people to apply to their bodies to ward off disease. Mustard's antiseptic properties boosted the city's immunity and saved countless in Marseilles. Later it was also used by women who would pat it on their skin to avoid blushing. Antoine Claude Maille then became the official supplier to Louis XV of France, Queen Victoria and Catherine of Russia. The first boutique opened in Dijon in 1845 followed by Paris in 1996 and then London in 2013. 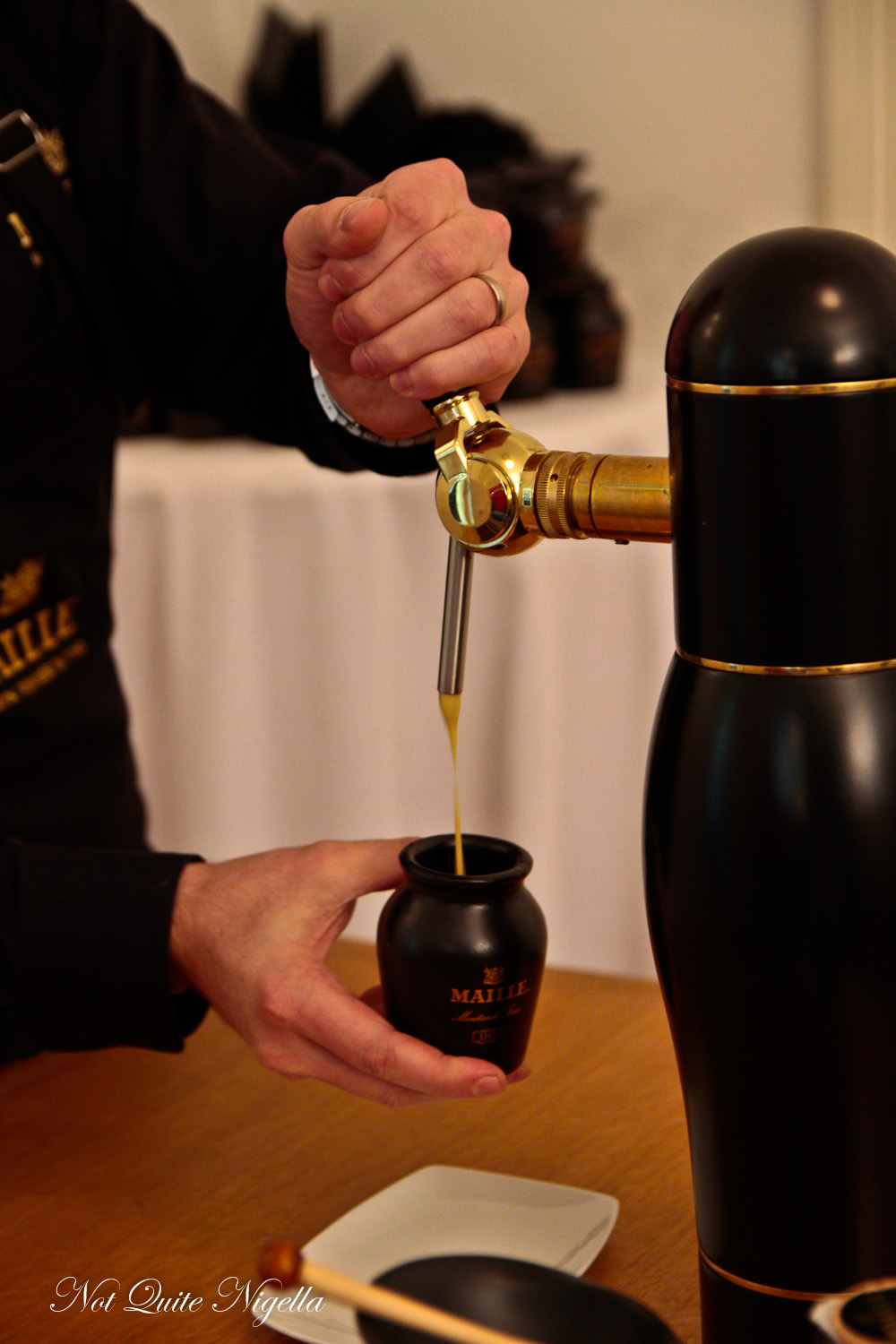 Mustard is usually made by crushing mustard seeds with water and vinegar. Maille's mustard making process is different from others as brown seeds are used and these are soaked in white wine rather than vinegar. The mustard seeds are sliced rather than crushed which creates a smoother texture and keeps the aromats and the flavours of the mustard intact. The flavours in Maille's range of flavoured mustards are either added at the beginning or at the end. For the mustards with wine at the core e.g. Chablis and Sauternes, this occurs at the beginning of the process when the seeds are soaked. For all other varieties e.g. Bleu Cheese, Blackcurrant Dijon the real fresh ingredients are added right at the end of the process. 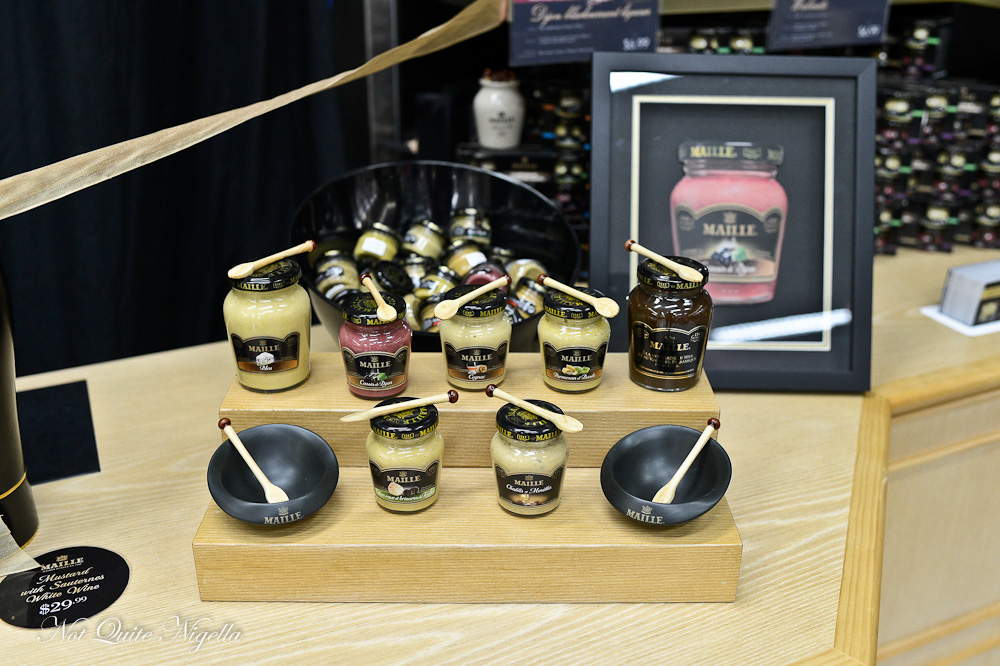 What makes conditions for good mustard seeds is a cold winter, frosts and a mild summer - it would be impossible to grow mustard seeds in the South of France's Mediterranean climate. Undulating soils and layered soils also produce great mustard seeds. To taste mustard Elodie Charlotte-Cleria, one of the world's ten mustard sommeliers (a Maille creation) recommends smelling the aroma first and then tasting it on a neutral item like a bread stick or slice of bread. Place the mustard on the tip of your tongue which is the most receptive. 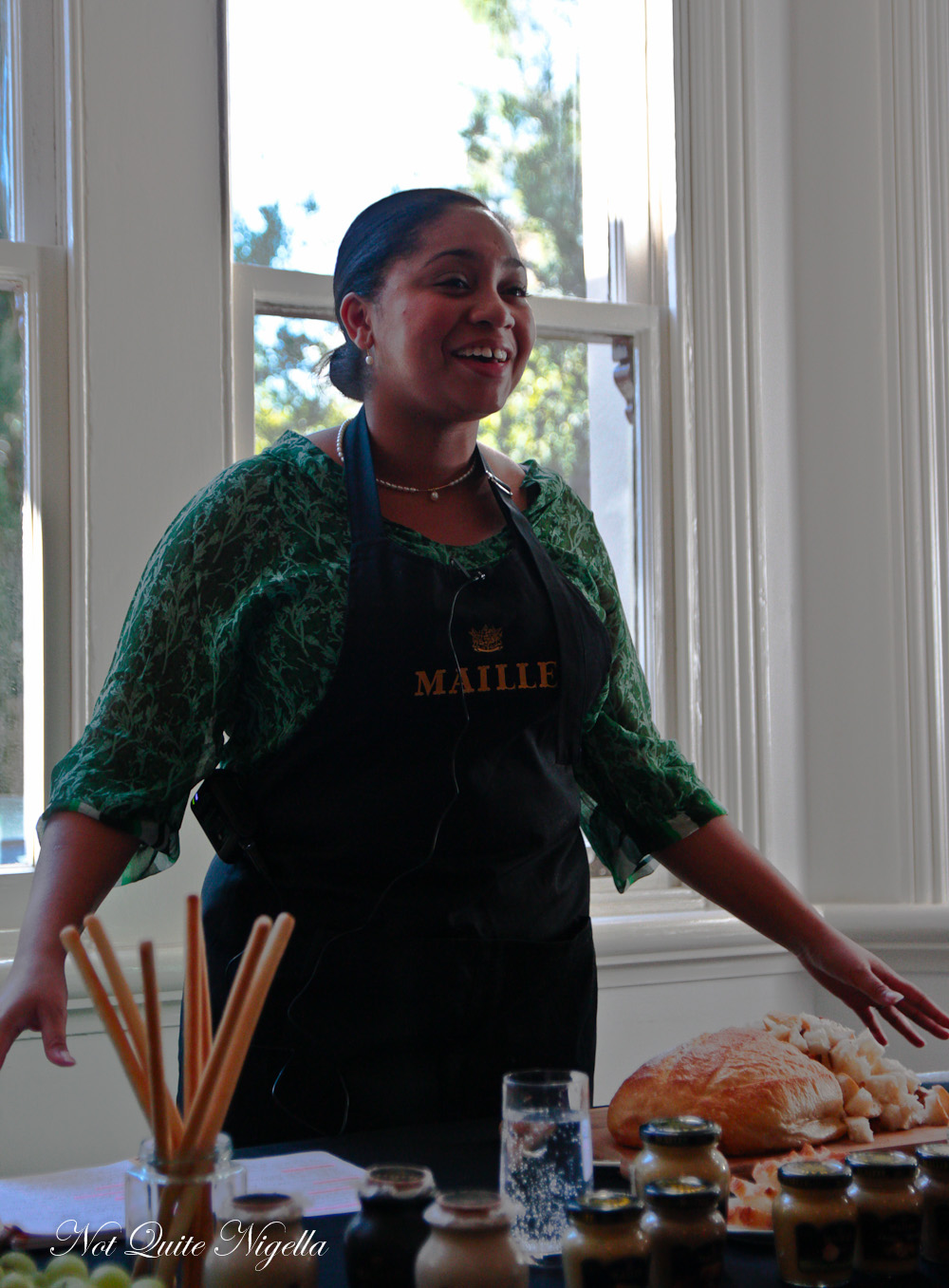 The Sydney and Melbourne stores showcase 24 types of mustard and vinegars while their flagship store in Dijon France features 60 items. The process of curating mustards for the Australian market was based on Australian tastes. According to Amélie Lacombe, enior Export Manager for Maille Australia, New Zealand and Latin America the range reflects Australia's Mediterranean and Asian roots. The colours of the mustards available range from a blush pink cassis or blackcurrant to a dark brown mustard not unlike Vegemite in colour but made of a 50/50 mix of balsamic vinegar and honey mustard - this is said to be ideal for barbecues along with the bleu cheese mustard. 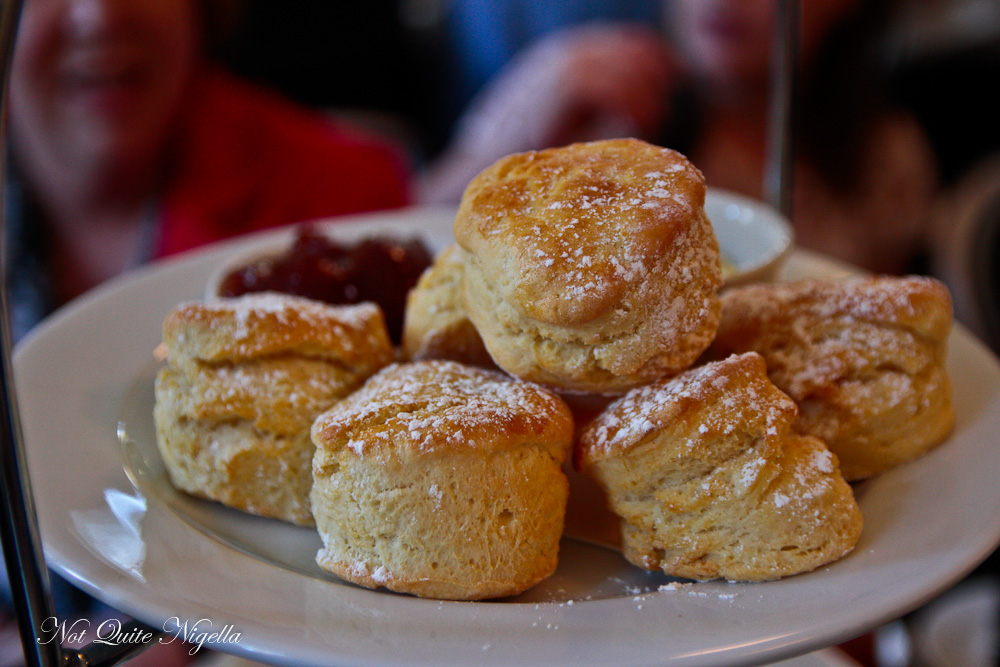 There are a surprising number of sweet applications for the mustard, particularly for sweeter mustards such as the cognac mustard. Around the corner from the boutique at Boronia Tea House we try a little of the cognac mustard in the clotted cream with strawberry jam on scones. It's a magical combination giving the cream an additional richness and just the right amount of saltiness to balance the sweet jam. 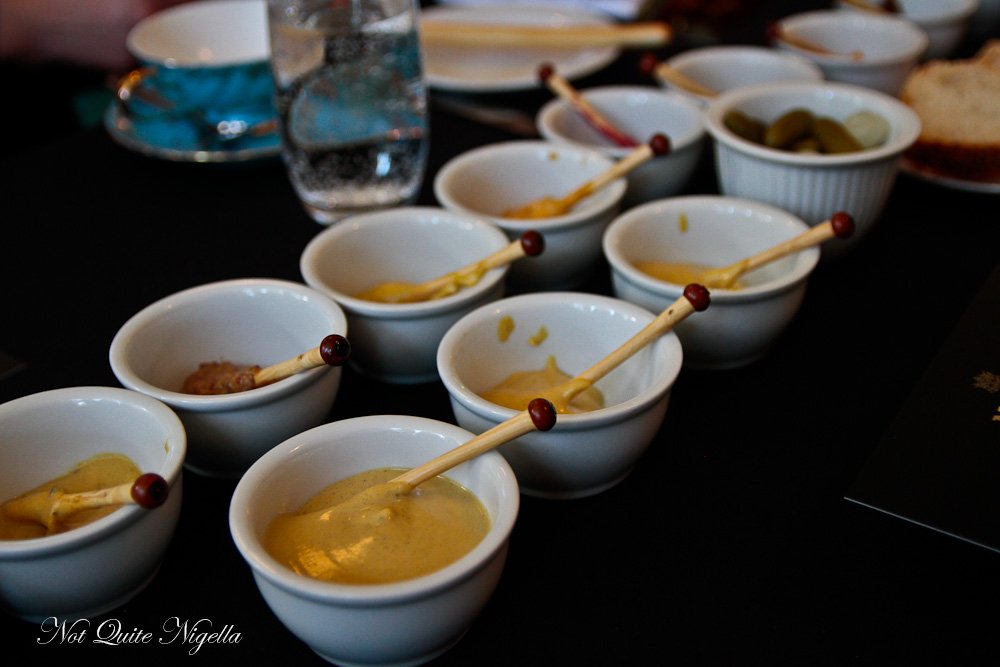 There are remarkable differences in each mustard and most of the Maille mustards are not particularly hot. The parmesan and basil is a favourite for me as is the walnut that is pure umami. Elodie recommends using the parmesan basil mustard in place of parmesan in items like lasagna, effectively cutting the calories in half. I'm less smitten with the mango and Thai herbs mustard and the sun dried tomato and esplette chilli mustard but there are enough flavours to be able to find a favourite. The best place to store mustard is in the fridge to keep it "alive" and the fresher the mustard the hotter it will be. 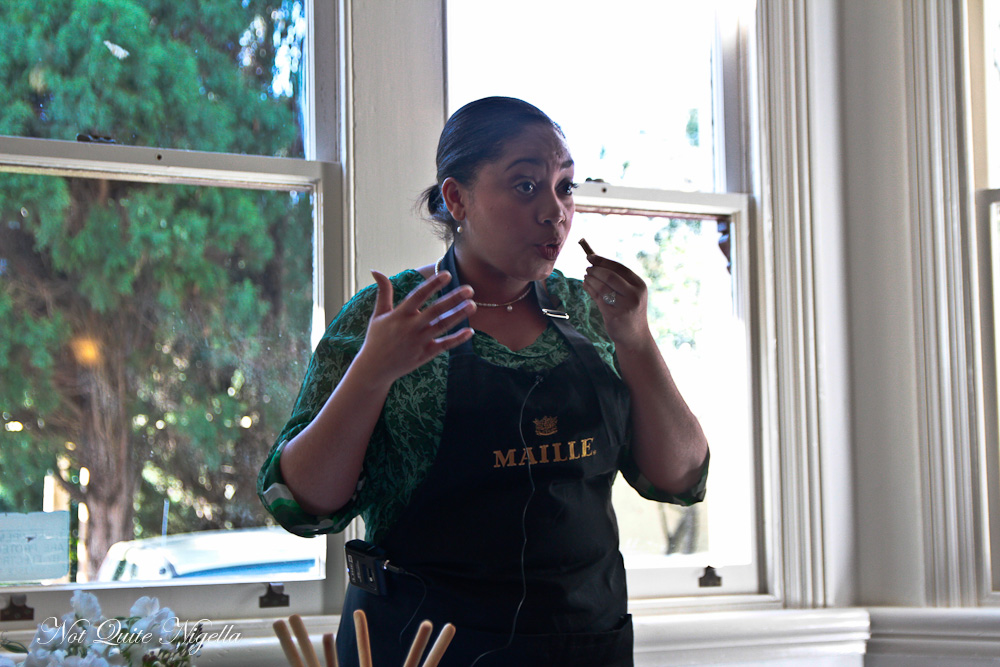 The boutique display in Mosman's Bridgepoint Shopping Centre occupies a wall of a supermarket. Here they dispense some mustards by tap. If you bring back your prized Maille Chablis and Sauternes mustard ceramic pot, you will pay just half the price. A range of vinegars and cornichons are also sold. 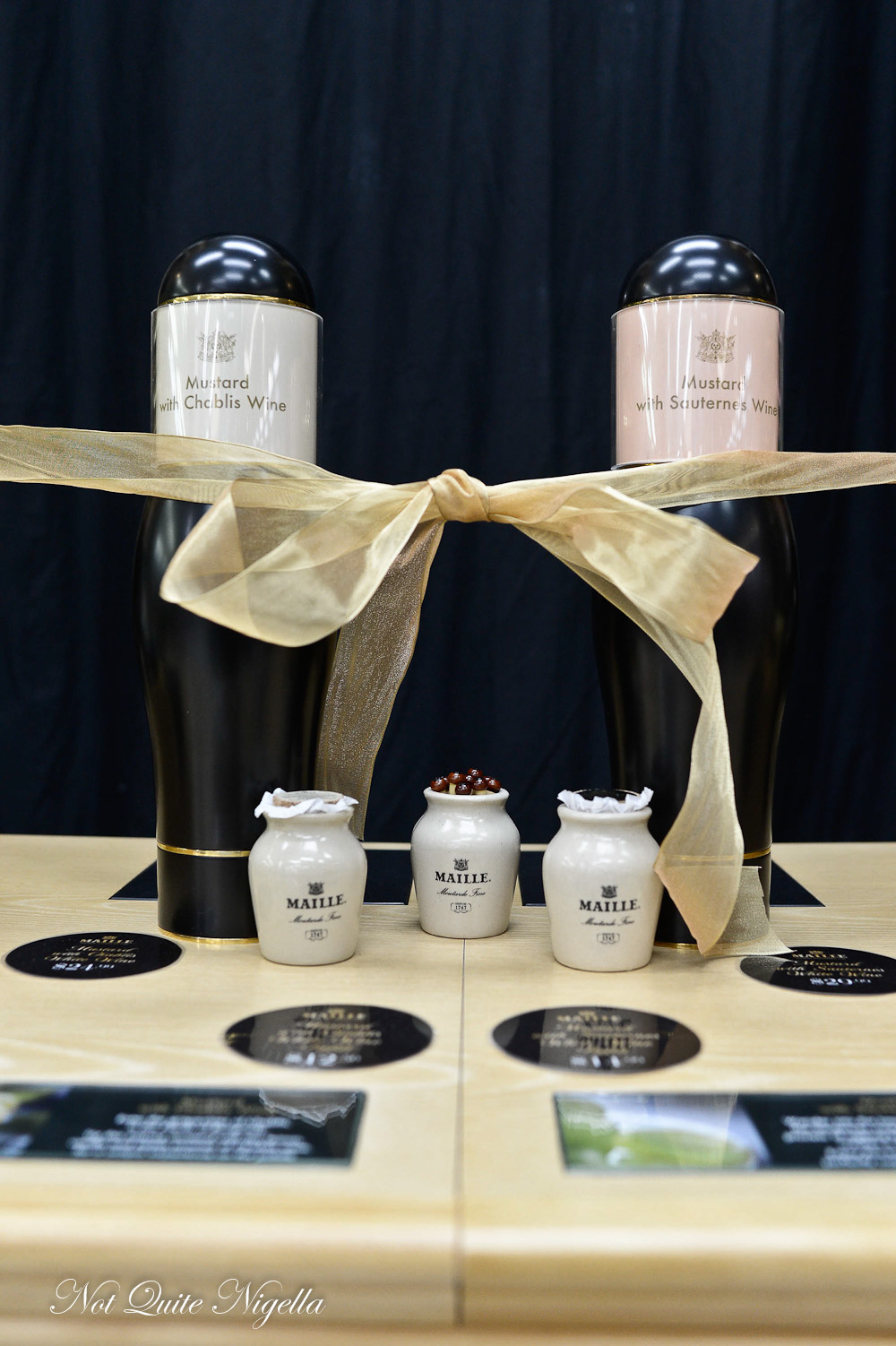 Which brings me to the queen of mustards: Périgord black truffle and Chablis. Available for just five months a year during truffle season it is a spread heady in unmistakable aroma of truffles. A small pot retails for $100 and for just one lucky Dear Reader, you will receive a 500g jar of this intoxicating mustard worth $500! This is a truly exclusive product as there are only 5 of these pots available for sale in Australia! 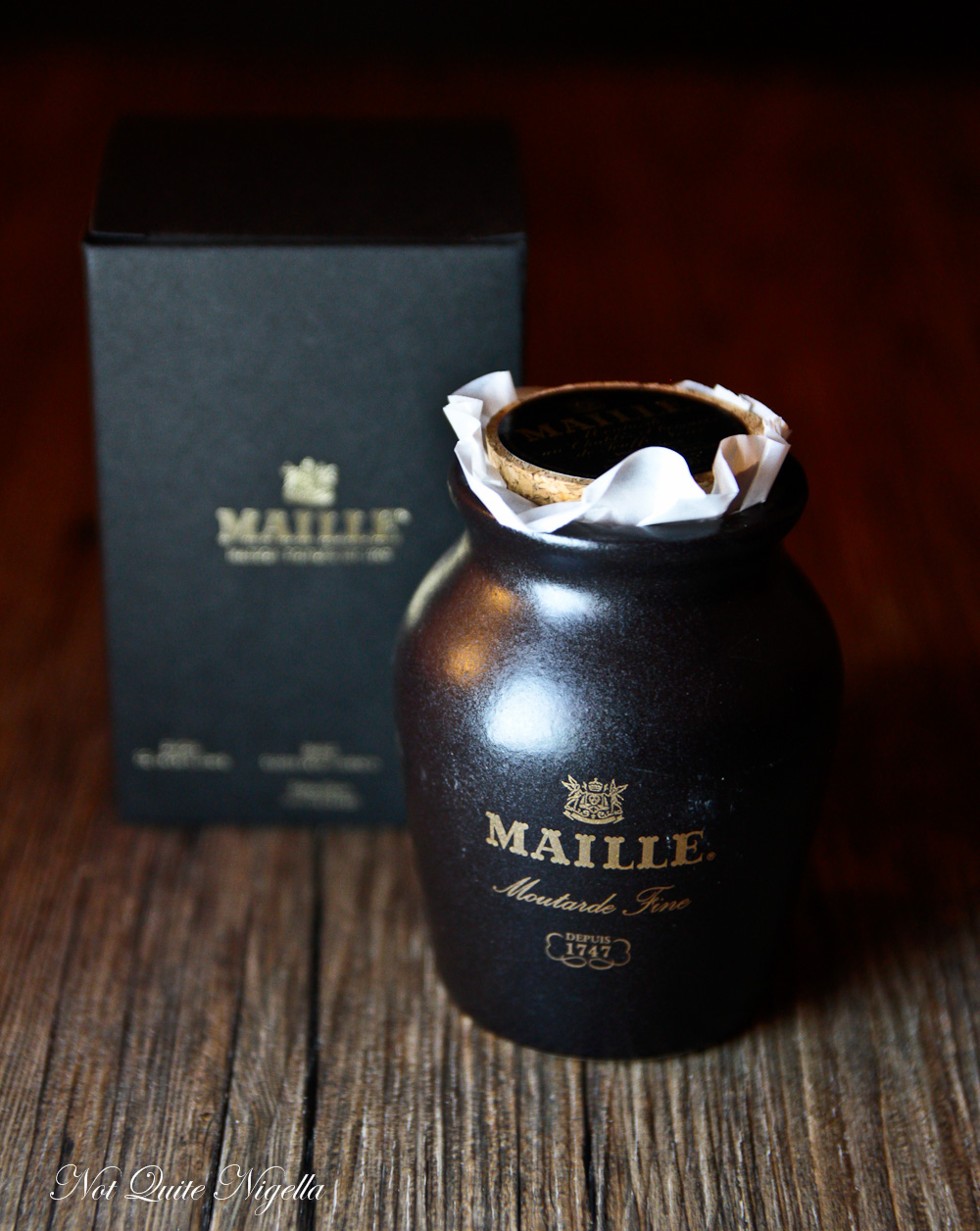 To enter, all you have to do is tell me what you would eat your black truffle and Chablis mustard with! Simply add your answer as a comment to the story. The competition ends at midnight, the 31st of August, 2014! You can enter this competition once daily and it is open to anyone within Australia. Winners will be announced on this post.

The winner is Sarah M. of Katoomba, NSW!