The lovely people at All Things Cupcakes featured this pineapple hibiscus cupcake on their Weekly Roundup of Cupcakes. Woohoo! How exciting is that? :)

I don't know if its something to be proud of but I can eat a whole baby Bethonga by myself. Bethonga Pineapples are in season now which means that I have squirreled three Baby Bethongas away in my fridge which I will then attempt to eat by my greedy self. I refuse to eat the normal acidic, tongue burning pineapple, it gives me the same react as sour lollies, that of gagging and wanting to rip my tongue out. By the time that my husband reads this post, the Bethongas will be long gone. I can be ruthless this way. 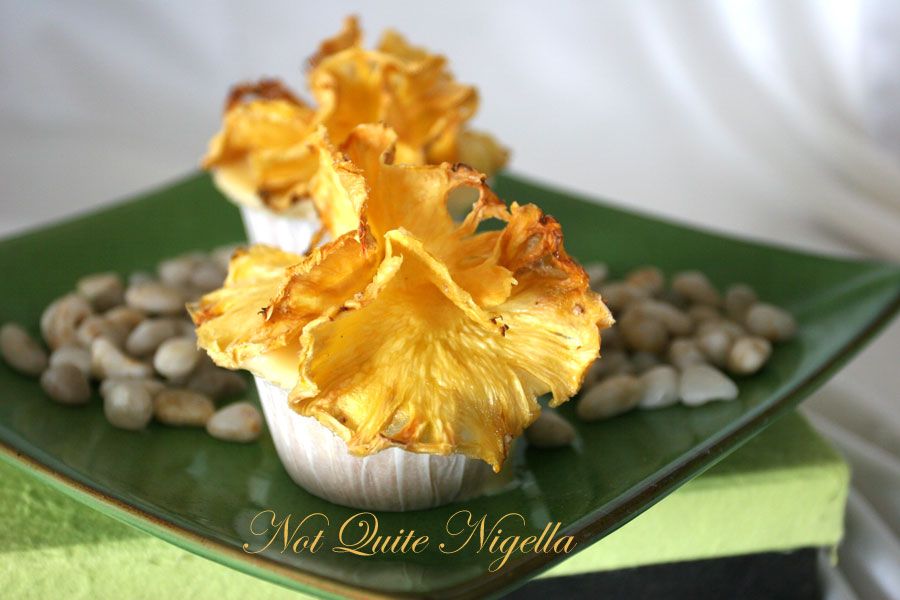 I did put half an pineapple aside for the decorations which are an interesting way of making these gorgeous yellow "flowers". The cake itself is easiness personified, no beaters or creaming, just stirring in one bowl. The fussy bit are the hibiscus flowers although this requires exacting knifework (being able to very thinly slice thin pieces of pineapple) and patience (waiting for it to dry in a low oven for over an hour). Neither of which I possess.

I made these pineapple hibiscus cakes for Tropfest, the outdoor film festival at the Domain in Sydney. I confess that I was too lazy to make a batch of the lemon cream cheese frosting, instead using some sour cream icing that I had leftover. The consequence of my laziness was that the sour cream icing was too runny to sufficiently hold the flowers properly. I just hate it when laziness isn't rewarded... 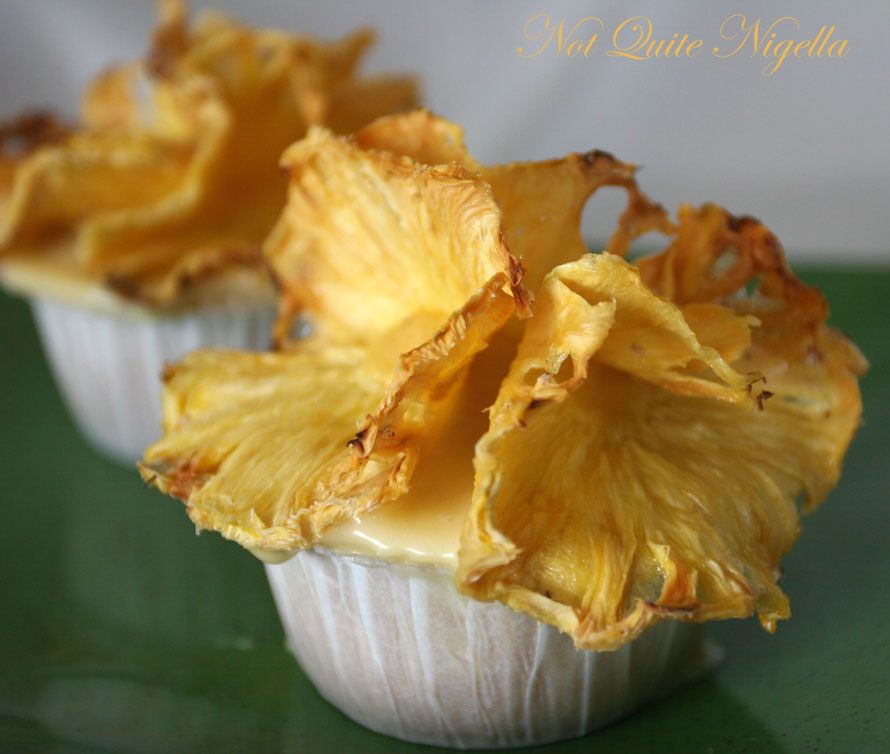 Step 1 - First make the Pineapple flowers, they are time consuming and fiddly.

Step 3 - Add all ingredients into a mixing bowl and mix on low speed until combined and then a higher speed until batter becomes pale. Spoon into patty tins. 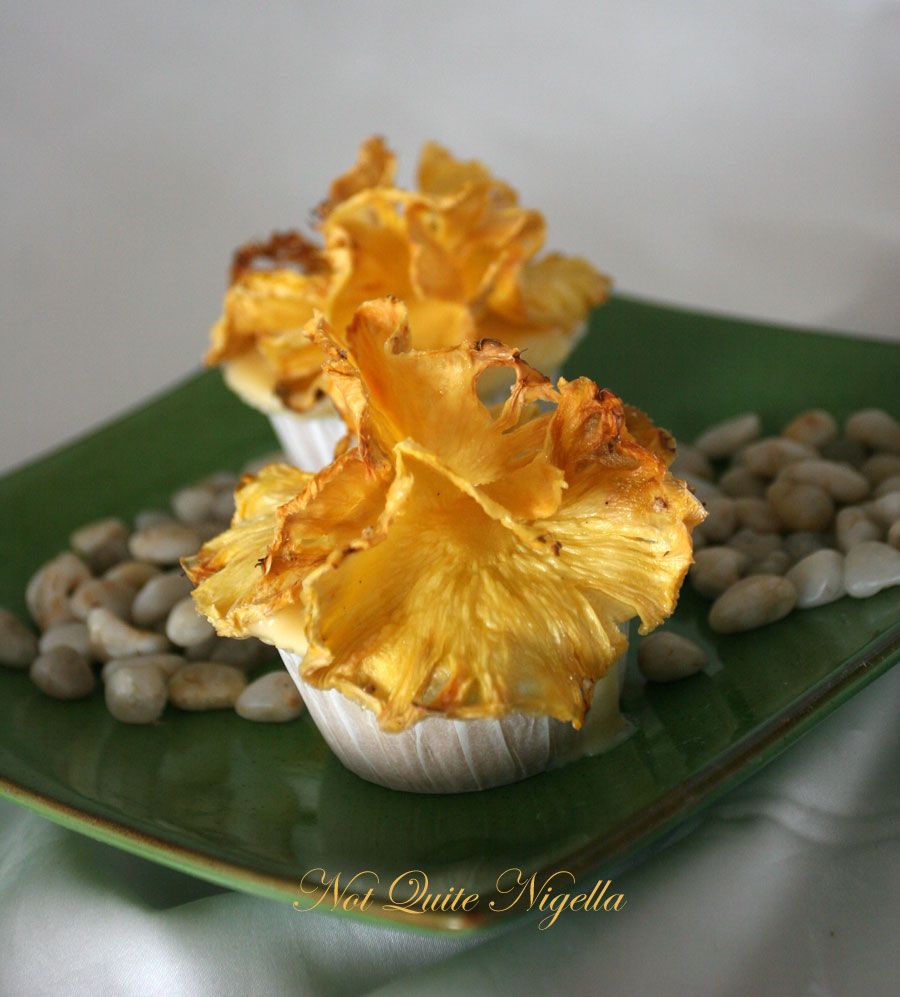 Step 1 - Heat oven to 100°c fan forced. Dissolve sugar in water together in a small saucepan on low heat and then boil for 1-2 minutes (do not allow to caramelise). Using a pastry brush, brush each sides of pineapple slices with this sugar syrup. Place these candied slices in a single layer on a wire racks over a baking sheet. Leave to dry in low oven for one hour (approximately, do watch these as they can catch and burn). As soon as your time is up remove slices from rack, and shape into flowers inverting them over the bottom of small cups until they set that way. 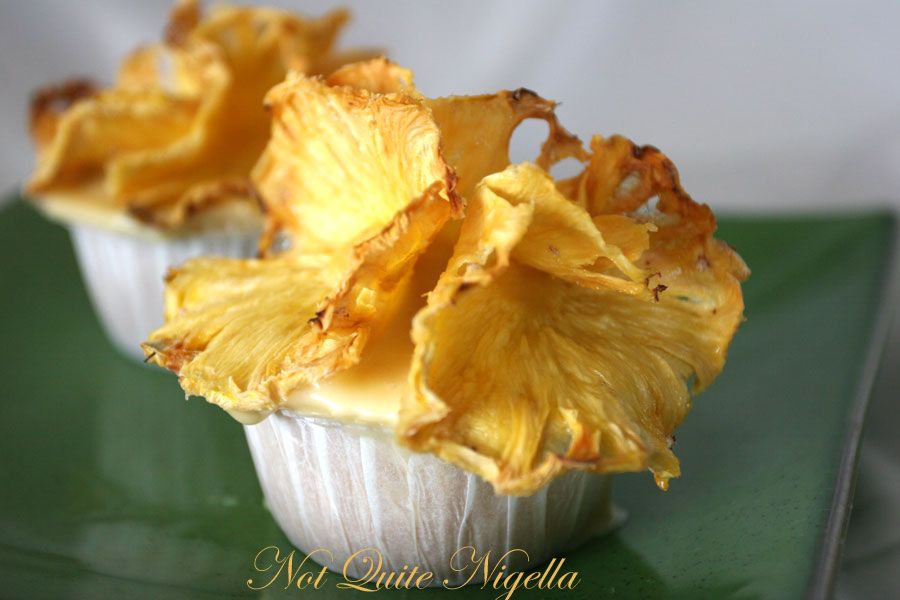 Beat butter and cream cheese in a small bowl with electric mixer until light and fluffy, gradually beat in sifted icing sugar and lemon juice. 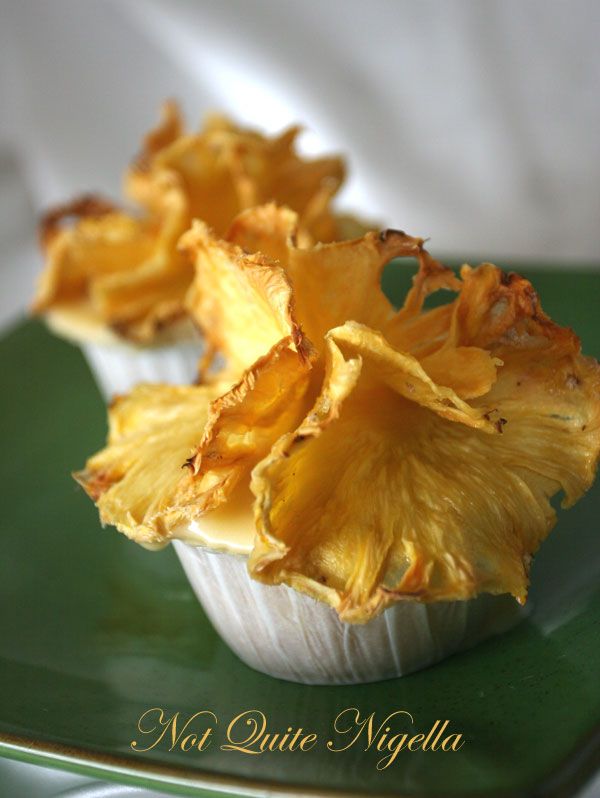