Imagine you had a friend in every city that you visited. Imagine that they were enthusiastically into food and knew the lowdown on how the city worked, that they warned you against any potential dangers and taught you how to speak that language and fed you the best of that country in a meal, all in the space of a few hours. Tonight, we are taking part in the Argentinian experience which shows us exactly that. 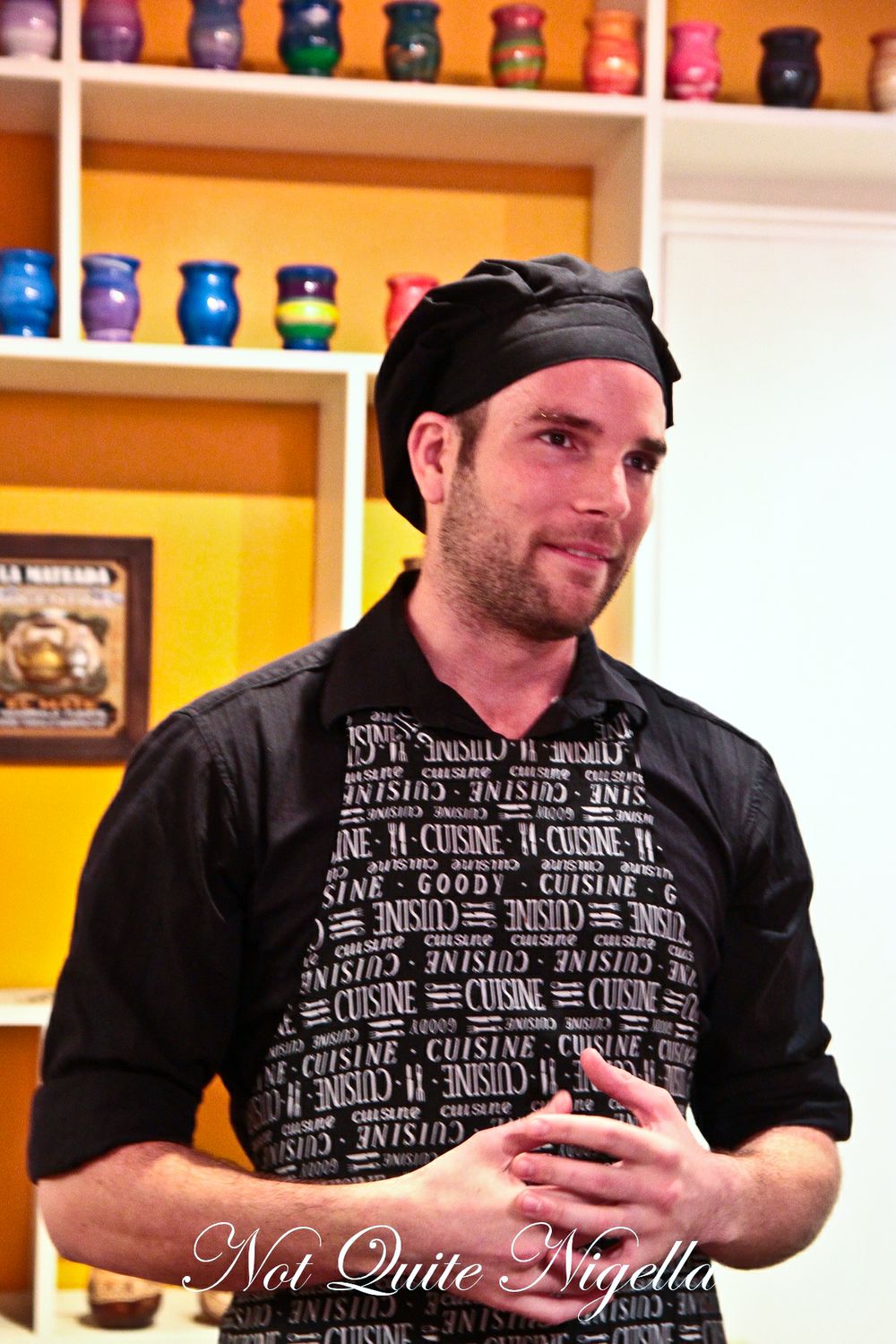 Started by Englishman Leon Lightman and his team from all around the world, he sheds light on Argentinian culture gained through eight years living here and pairs it with the most amazing steak (which we learn how to cook) and Argentinian wine all from the comfort of his first floor apartment (although this is set to change when he moves into new premises later this year). He also sees this as a great opportunity for people to meet other travellers that they possibly wouldn't as they might be travelling as a couple or a small group and recommends doing this experience early upon arrival into Buenos Aires rather than towards the end. 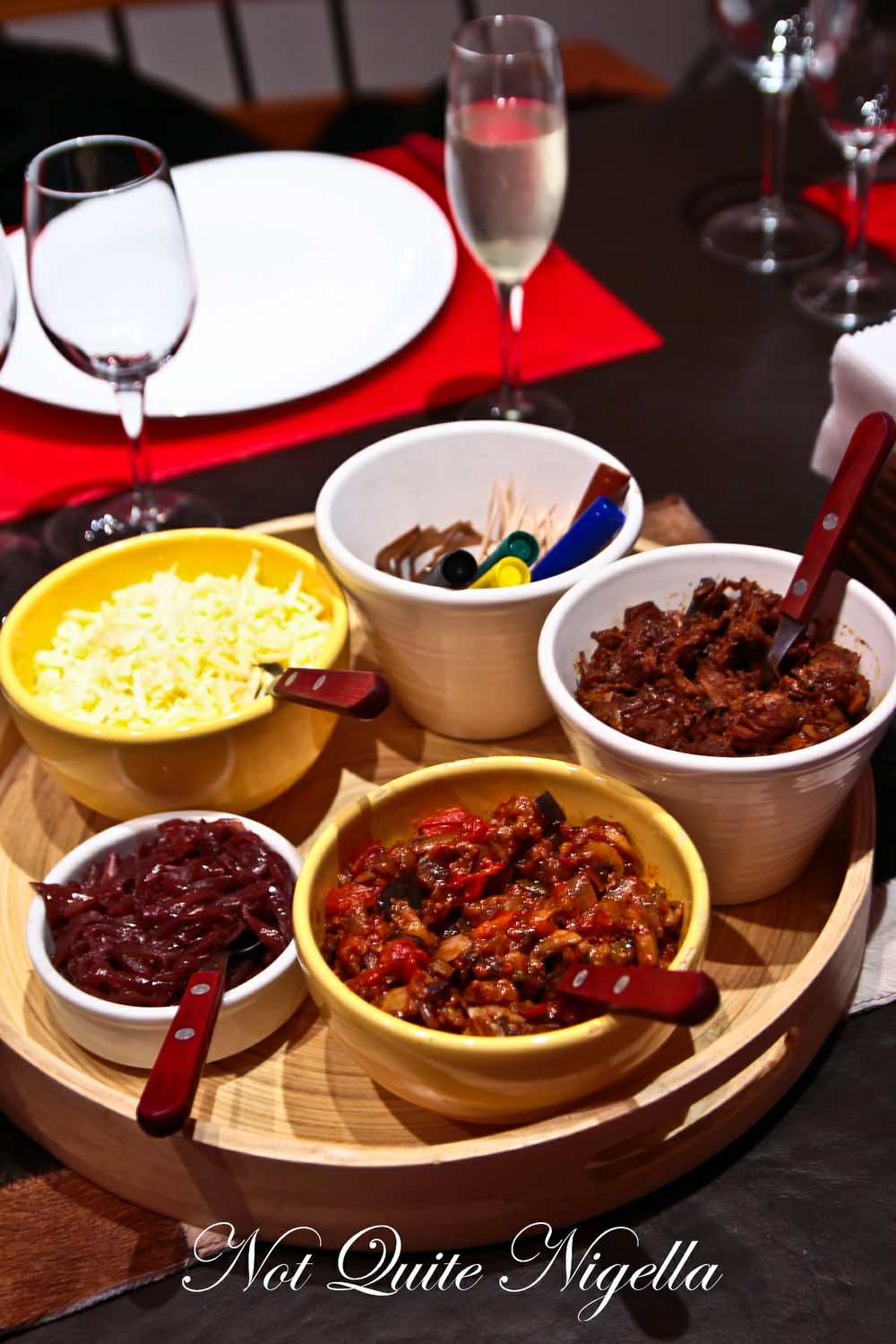 We start the evening with some champagne, lemon juice and herbs-an unusual combination but somehow it makes sense in Argentina. Leon talks at lightning speed and when we first arrive, he is so keyed up that I wondered if he was speaking English! A former lawyer, he realised that the world of law was not for him and sold everything including his suit for ?5 to fund a trip to Argentina where he has stayed since. On the table is a bowl that contains mate (the cups) and yerba (the tea) and ceramic mates line his wall in a rainbow of colours. 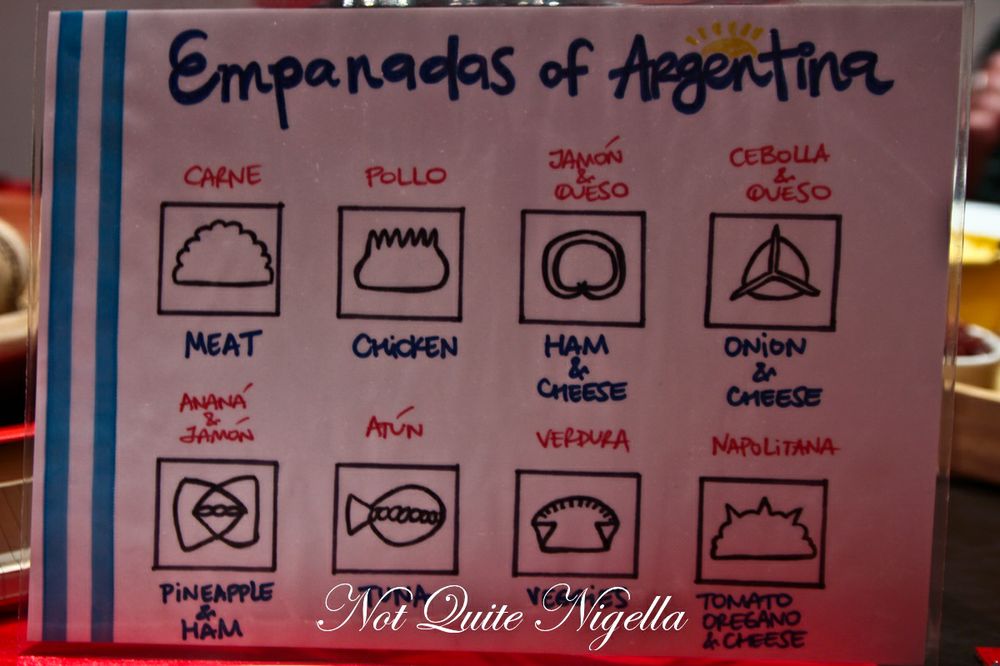 Our first activity is one to get us in the mood for something to eat and get our creative juices flowing. Leon shows us how to fold our own empanadas using the filling ingredients already prepared for us. There is beef slow cooked for four hours in Malbec (Argentinian red wine), caramelised onions also cooked in Malbec, provoleta & mozzarella cheese and mixed sauteed vegetables. We separate the empanada pastry rounds and fill the centre with our choice of filling (I went for classic beef). The key is not too much or too little filling, and then you press down the sides to seal them. He shows us the traditional shapes that empanadas are made so that you can tell the filling contained within. 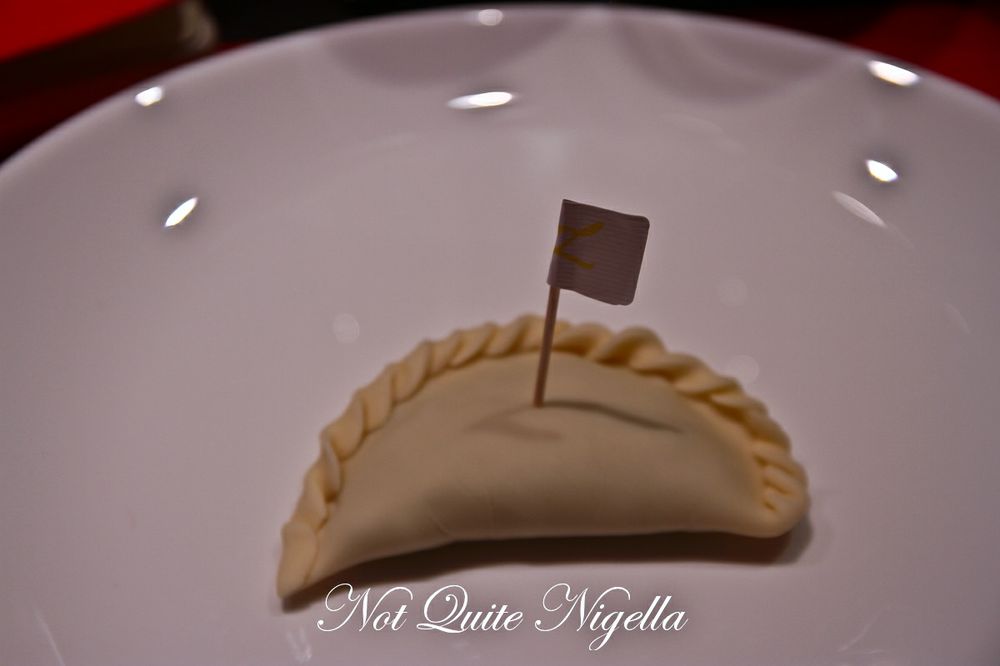 Then we crimp the edges by stretching and pulling the pastry gently and folding it over. Before we know it, our empanadas are being baked and we are onto our next round, novelty empanada shaping. There is a prize for the most creative novelty empanada and he tells us that a past winner made a ballerina pirouetting! 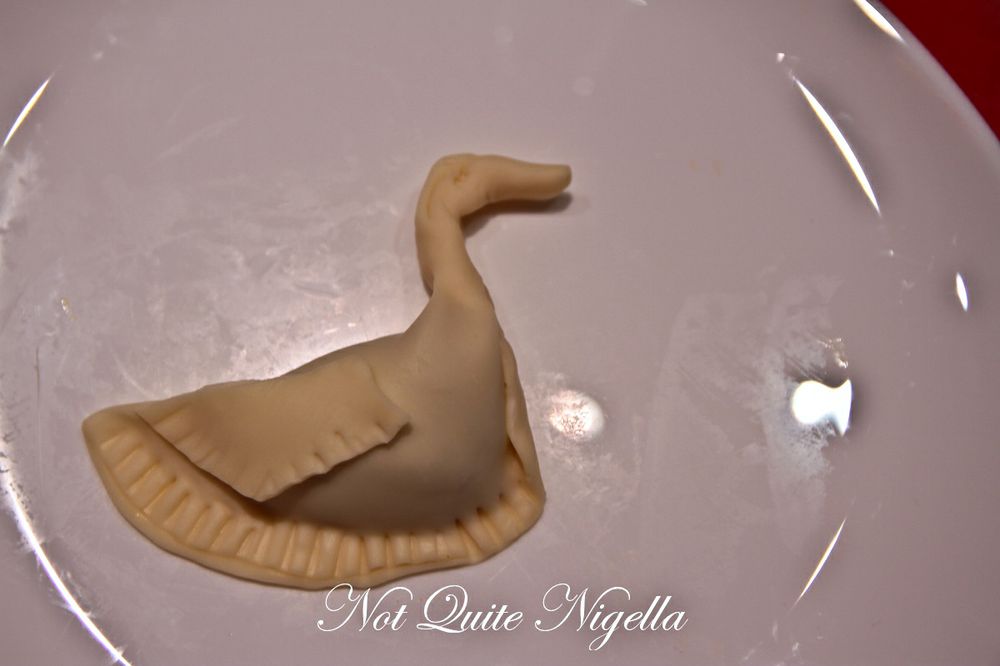 My not so brilliant swan duck goose creature 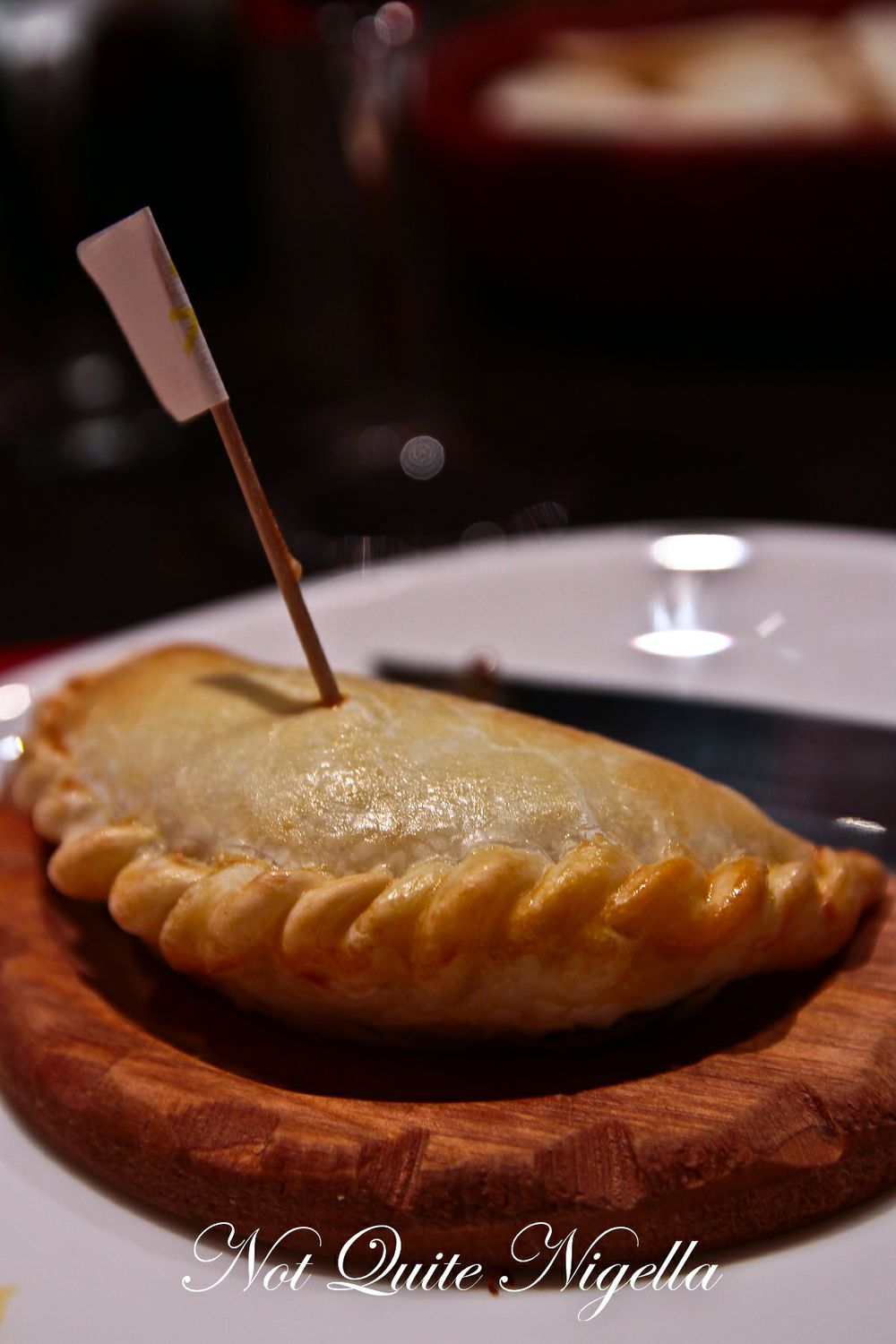 I get points for my regular empanada but not for my strange bird creature. We get to work while they bring us our next course of food. Leon tells us that Argentineans are extremely conservative with food and don't like any spice at all. There are three countries whose food influences the cuisine here and they are Argentinean, Spanish and Italian cuisine. However normally spicy items like chorizo here don't have any chilli in them. 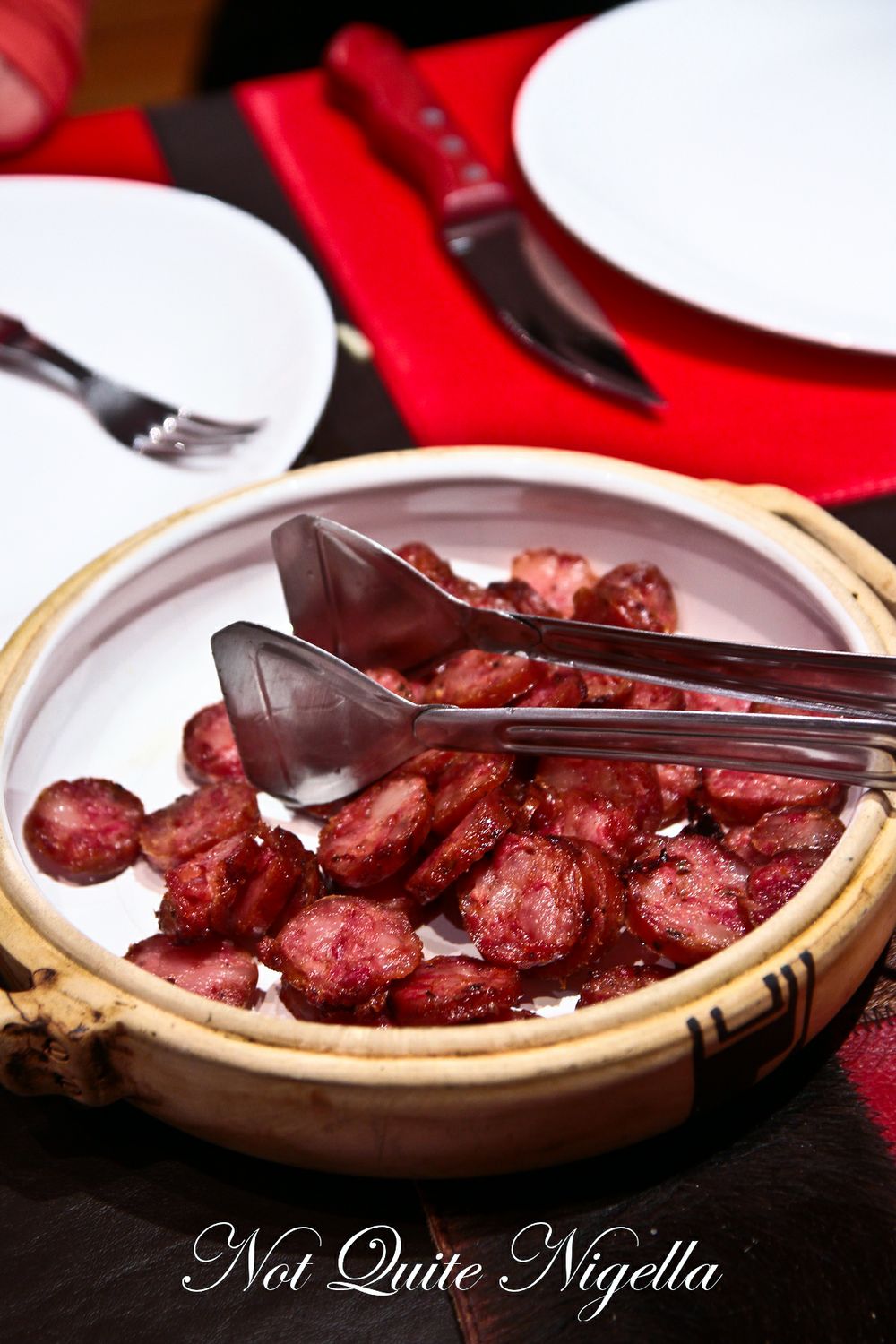 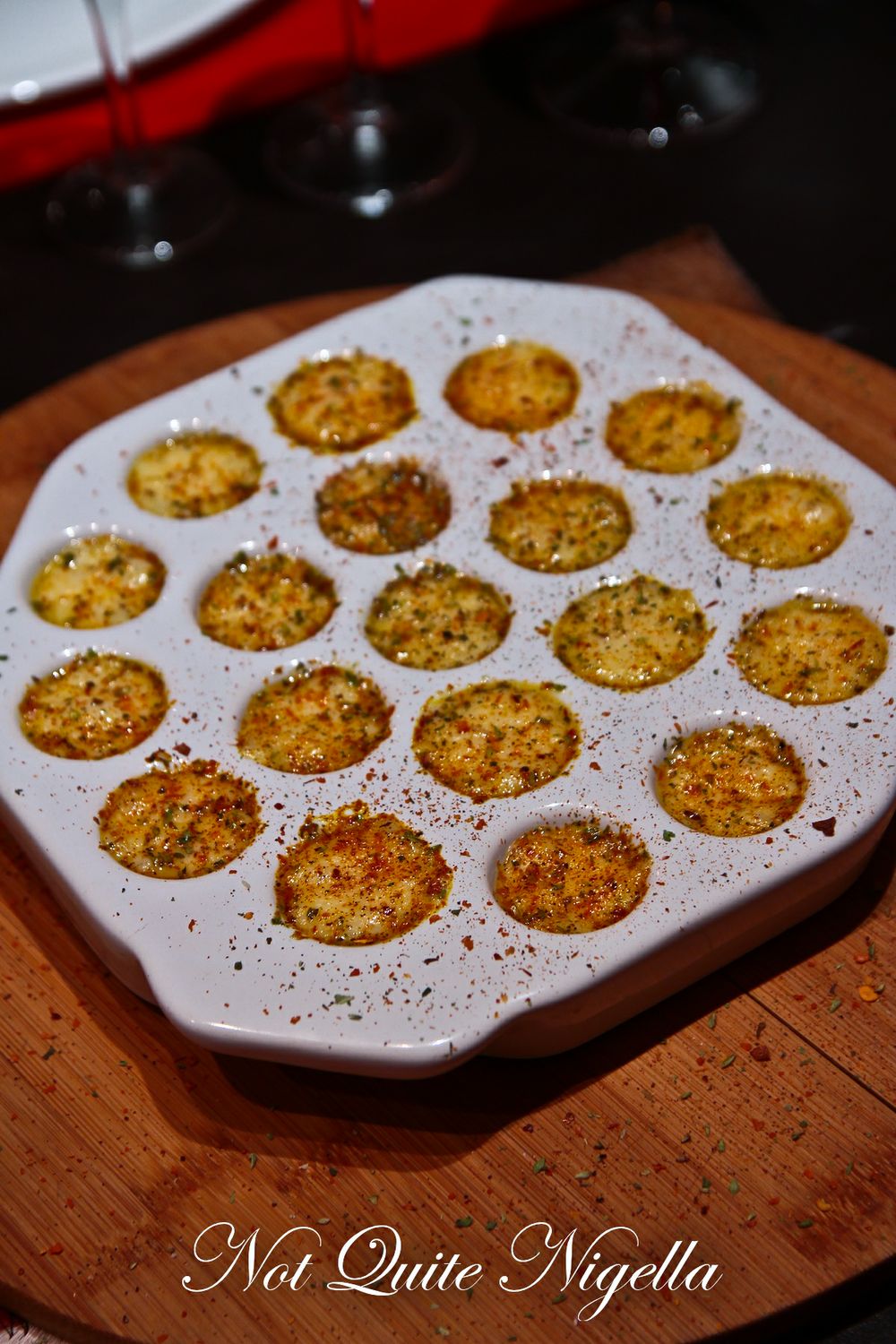 Indeed the predominant spice flavour in the pan fried chorizo is black pepper. There is also melted moons of provoleta cheese and chimichurri which is a herb mix packed with flavour that the chef makes using caramelised onions and garlic to take the edge off them. He suggests spreading the bread with the chimmichurri and then adding the cheese and chorizo to it. We follow this with our empanadas with chimmichurri (eaten with hands, the traditional way) and the beef filling is fantastic and full flavoured and the richness contrasts nicely with the fresh chimichurri. 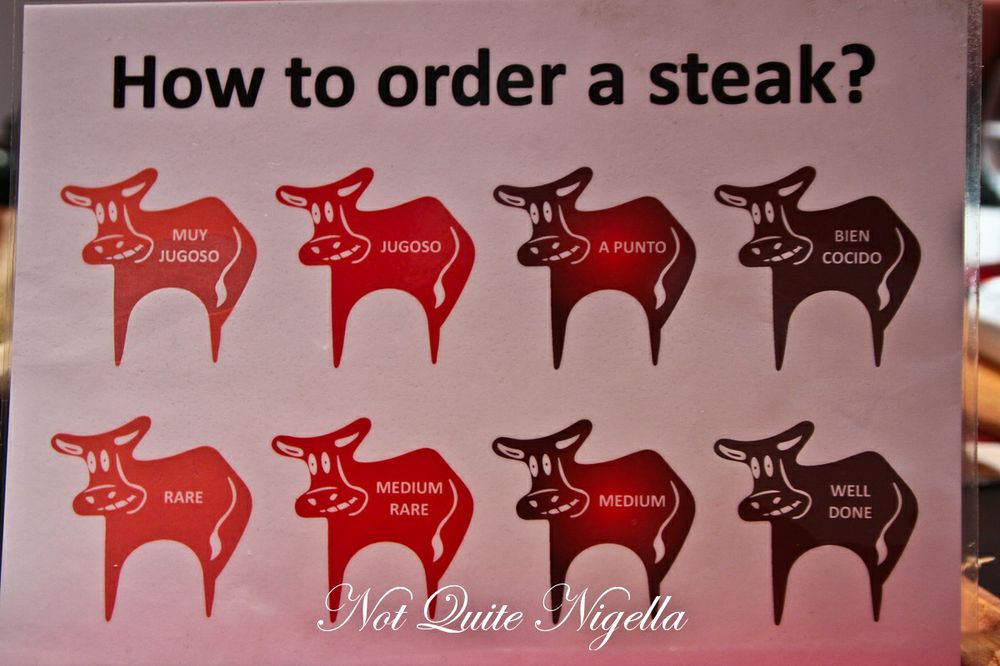 Steak time. Now this is serious here as Argentina is known for its grass fed beef and has built its reputation on it. Leon tells us that over 80% of the beef is no longer grass fed and is feedlot beef which is cheaper and because of economic issues, it has risen to become more common. He always uses the grass fed beef and he shows us how to ask for it in Spanish. 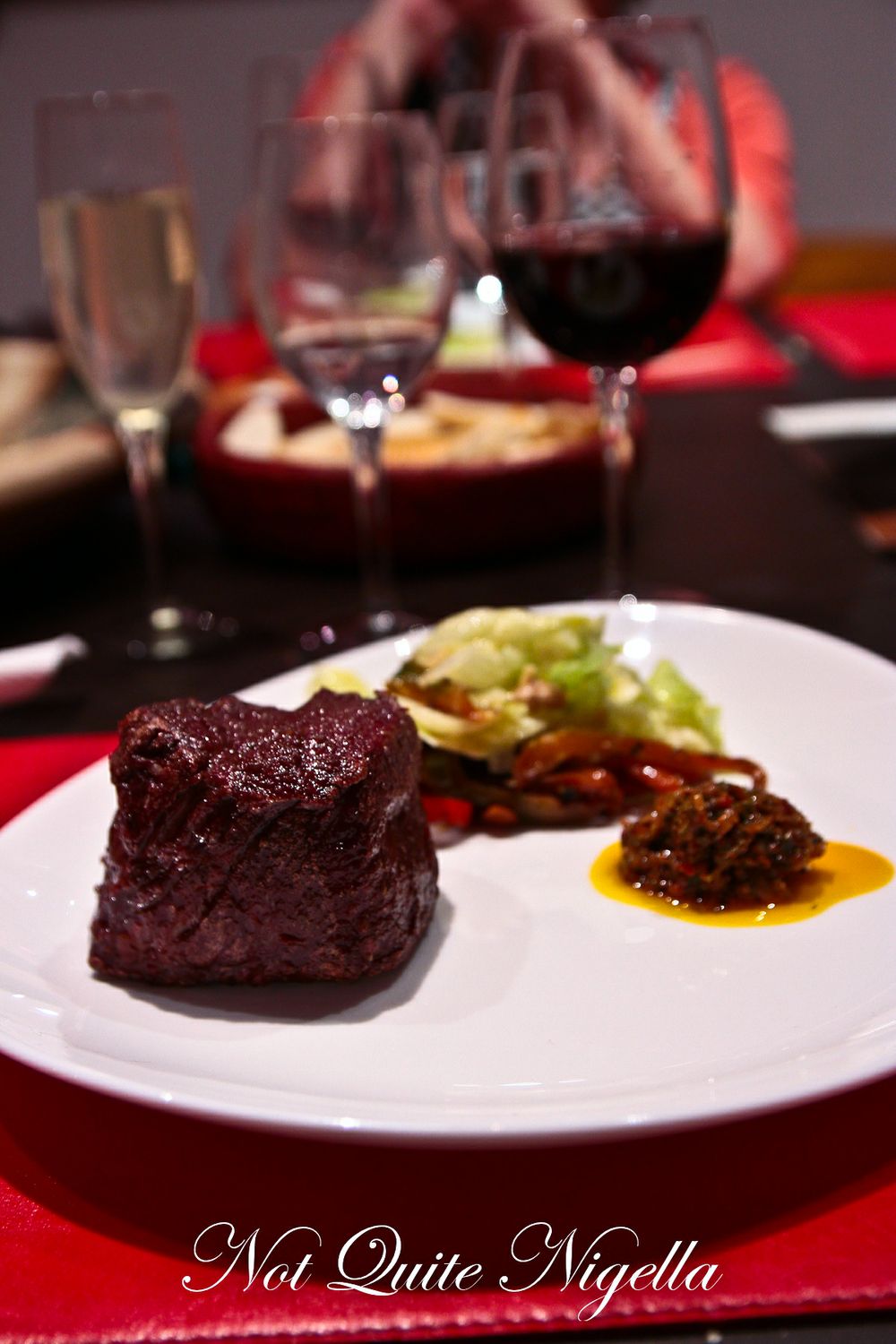 His chef cooks the steak using the Heston Blumenthal method which involves cooking it a very high heated pan and turning the steak repeatedly every fifteen seconds to ensure that each side is cooked evenly and constantly. He also recommends us ordering our steak on degree rarer than we are used to. I eat steak medium rare so I order a rare. He tells us that most Argentinians like their steak well done. 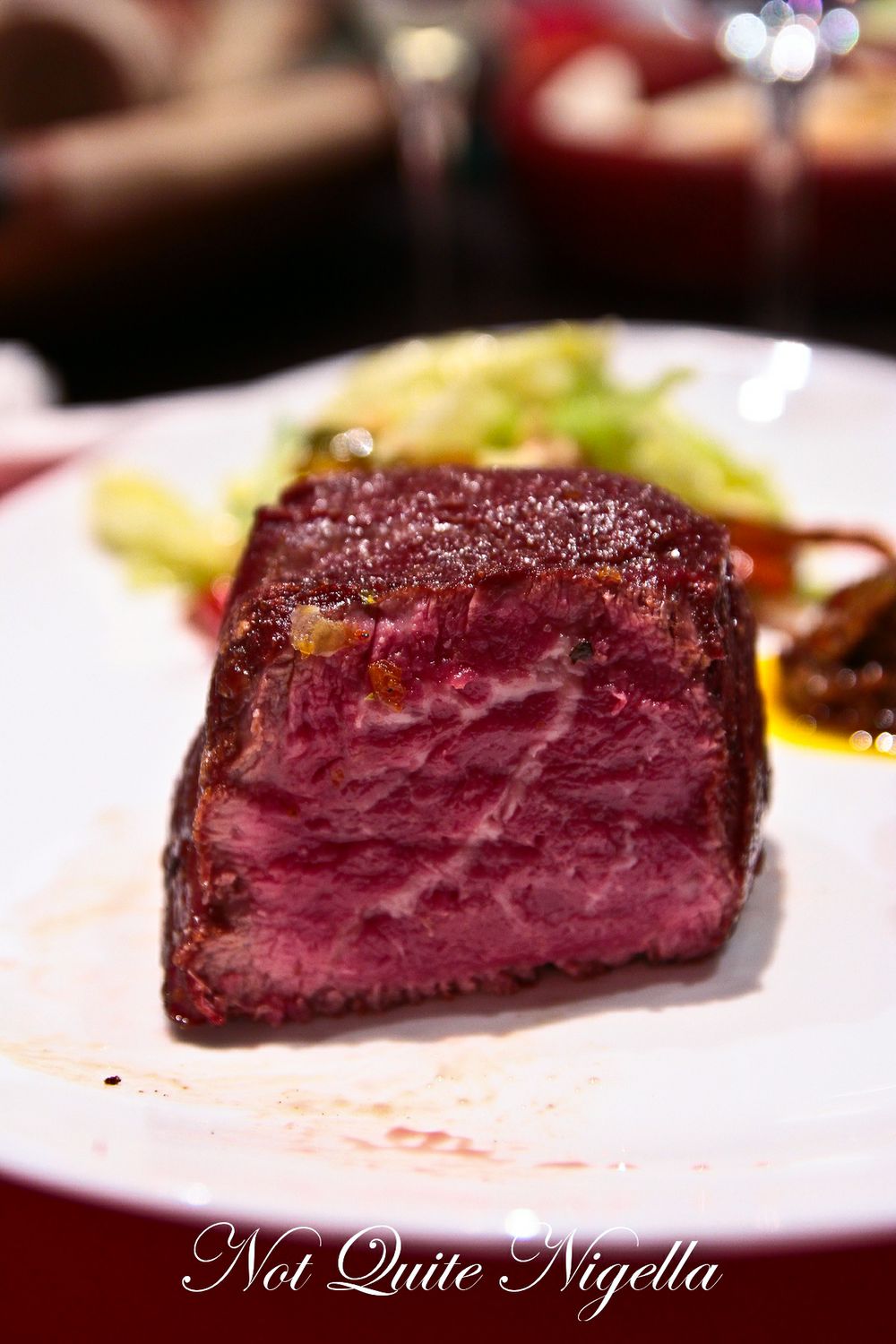 Our steaks come out and they have a gorgeous caramelised coat on the outside. He serves it with a salad although the steak interested me much more than the salad, and I slice into the eye fillet. It is divinely rare. I pop a piece into my mouth and it is incredible. There is a lightly crunchy caramelised outer and the inside is perfectly tender and seasoned with the chimmichurri. I'm in heaven and I only wish I had more room for this perfect 200-250g eye fillet. 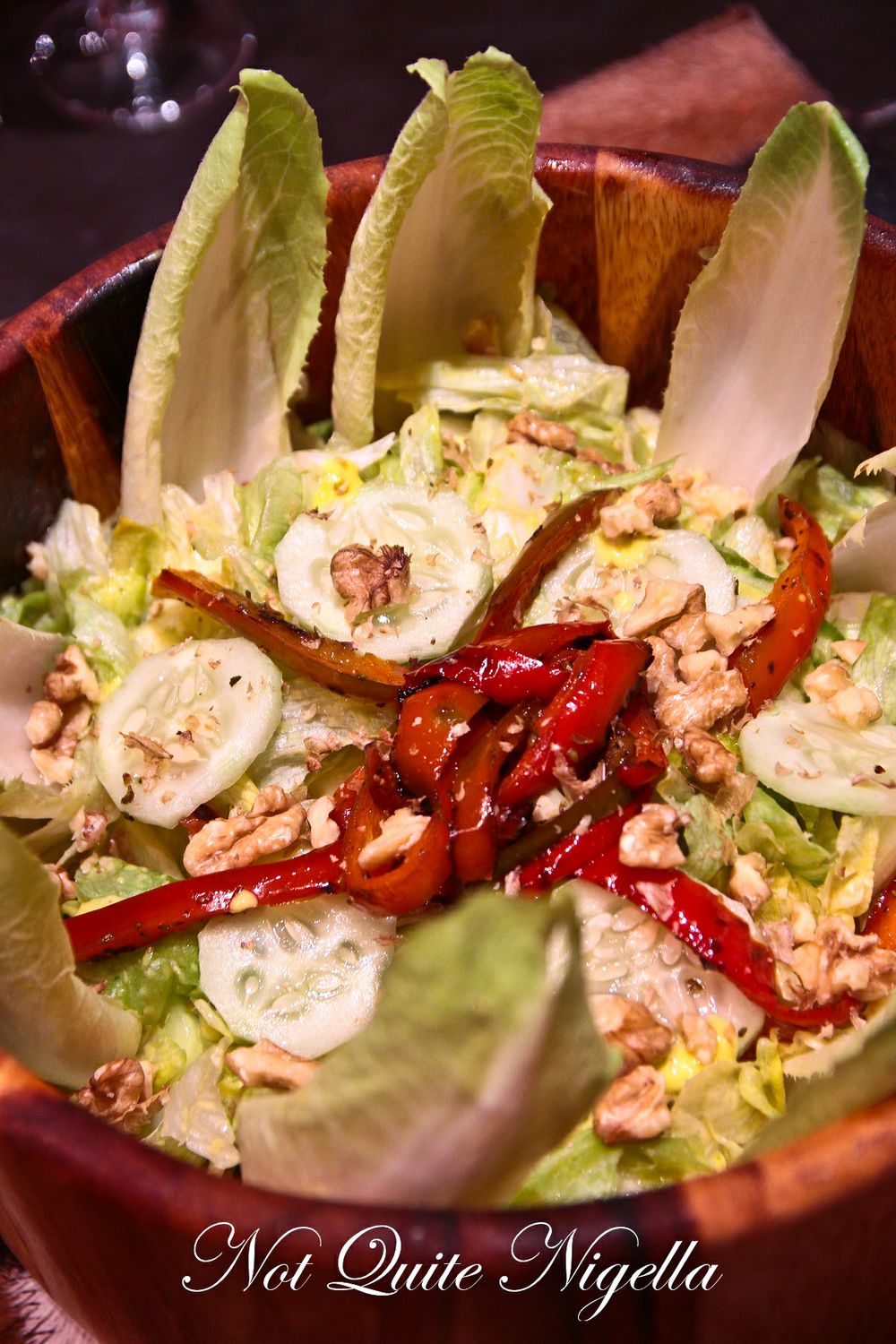 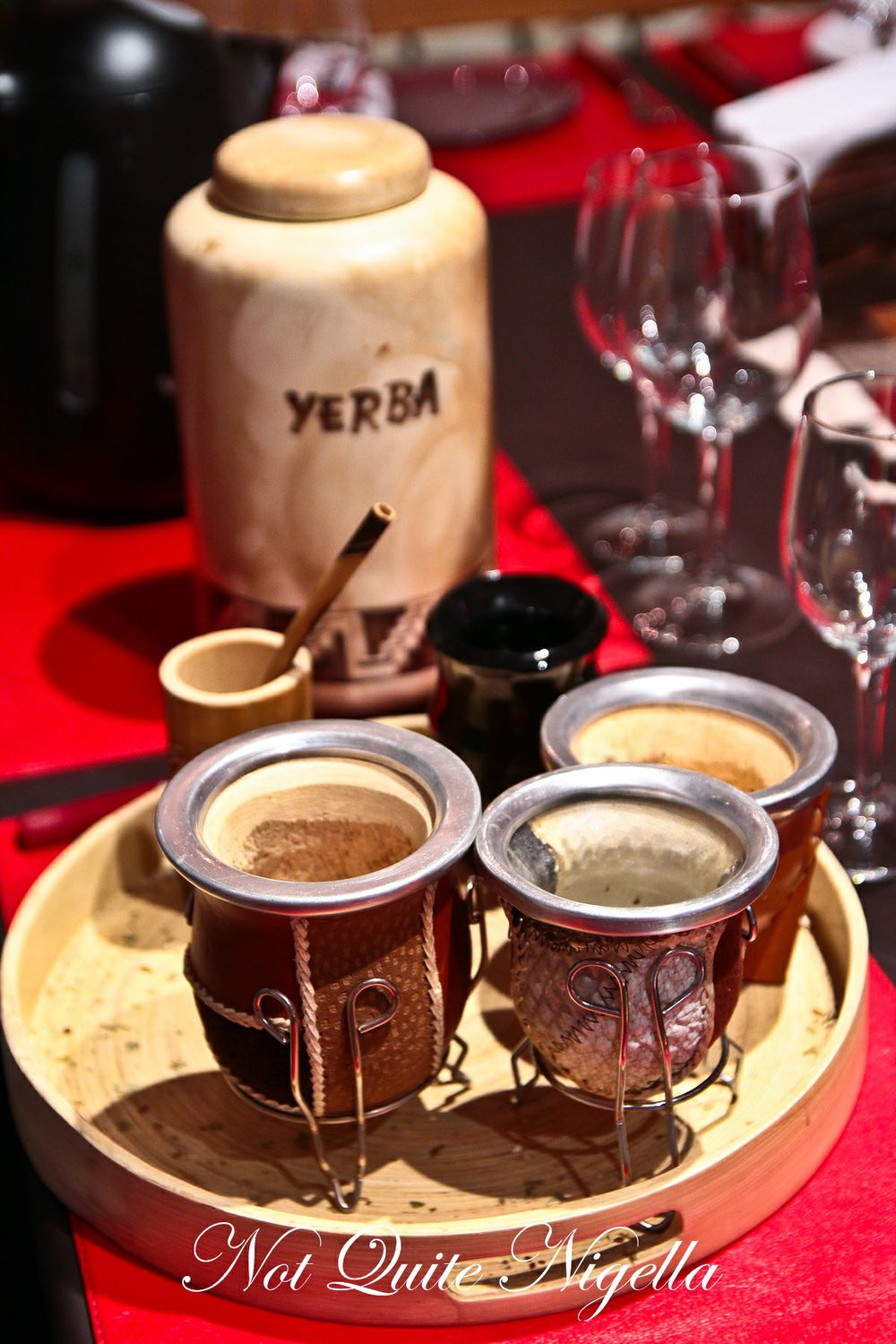 Lat but not least is the yerba tea made from a holly bush. Now this is a tea unlike any other. Leon shows us how to make it in a mate cup and it is made the opposite way to other teas. You add a lot of tea and only a relatively small amount of water. First you fill the mate cup up until just under the rim (the cup is solid ceramic until halfway up so there isn't that much). 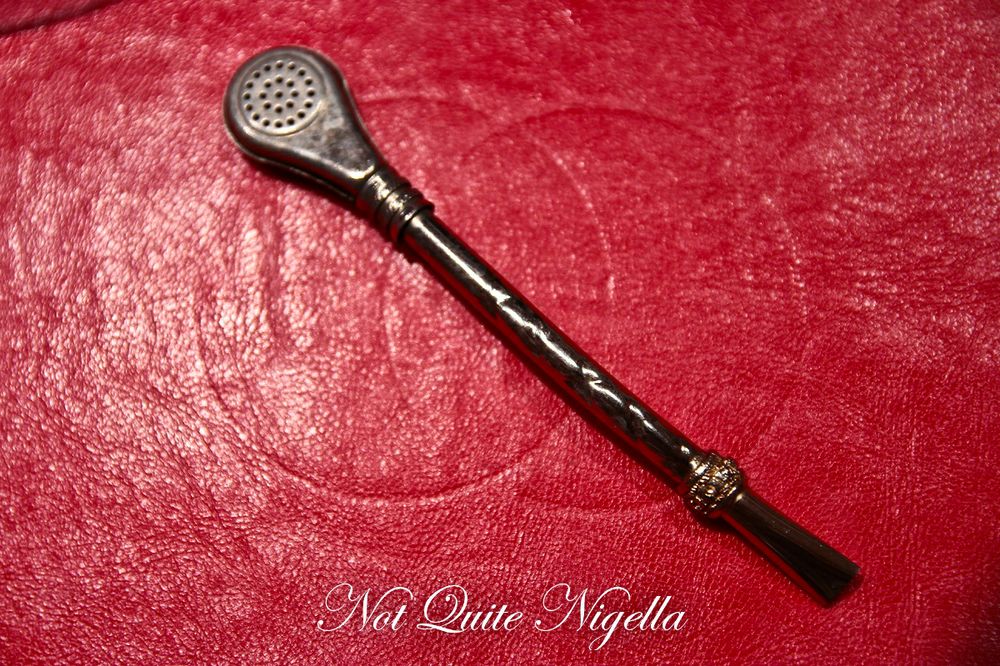 A yerba spoon straw with holes 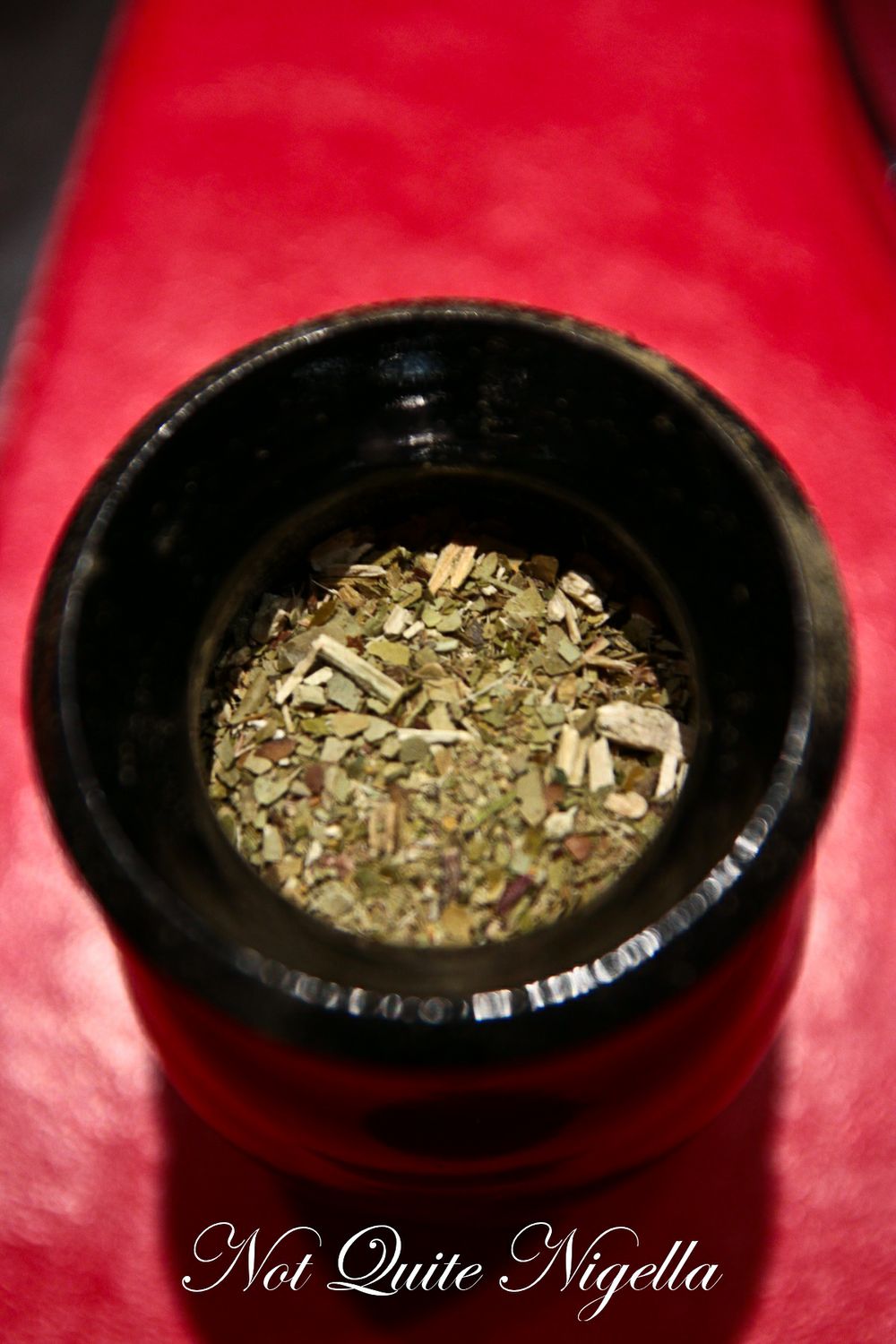 Then you cover the cup with your palm and shake it so that the dust gathers on the palm of your hand which you blow off - do this three times. And then you add the straw diagonally which has little filter holes in the bottom so that you don't drink any of the leaves. Add the water in (85°C, any higher will burn the tea) and it is ready straight away and each mate has about three sip's worth. 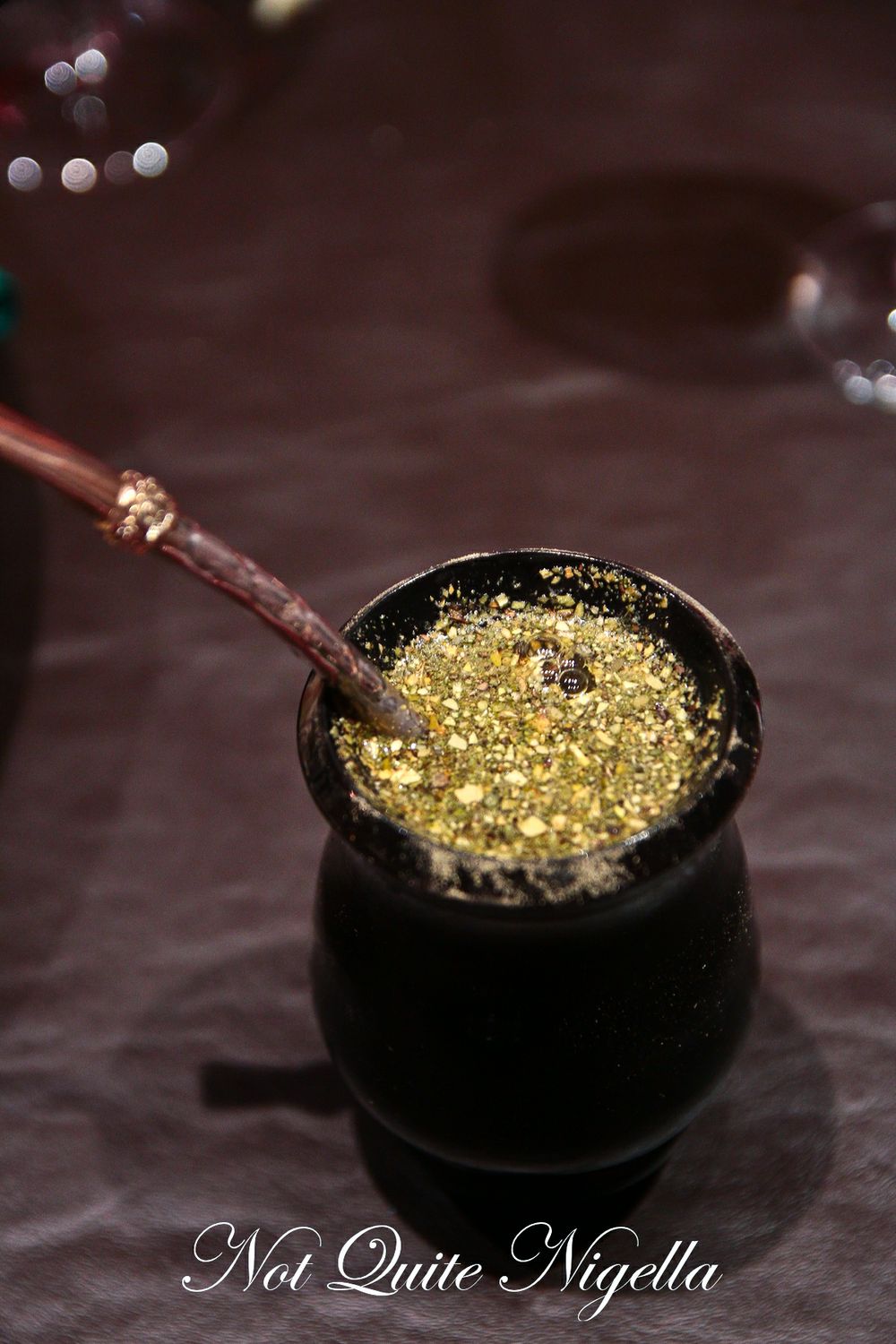 Two things about drinking yerba is that people share the mates of tea and it is passed around and you never touch the bombilla straw after you put it in as that would cause consternation. A big bag of yerba would cost about $5ARS and they drink this very bitter tea religiously. 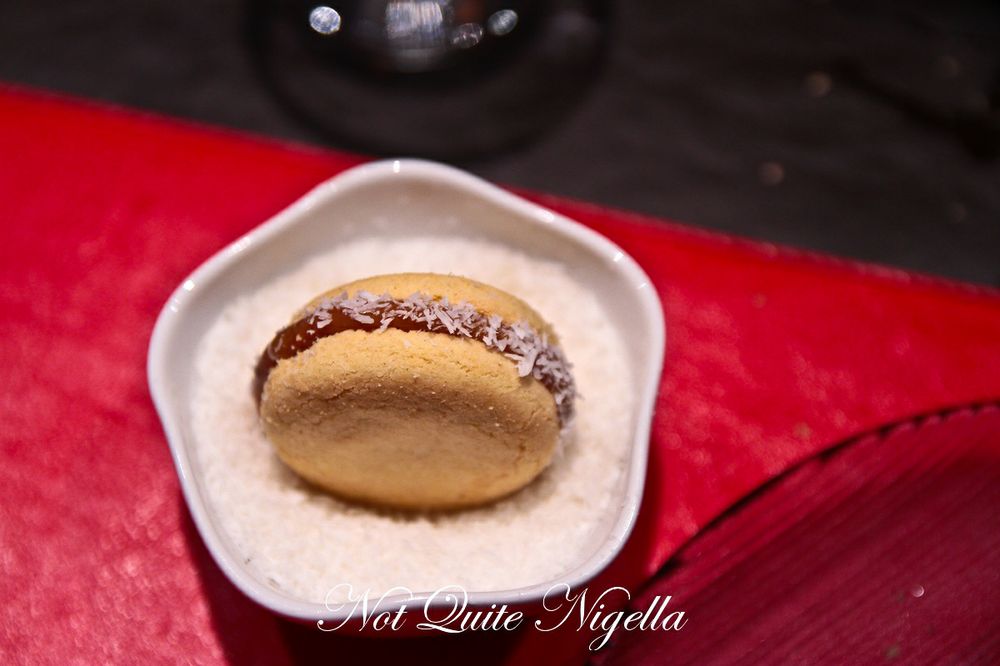 A way to counter the bitterness is with the alfajore, that sweet biscuit concoction filled with dulce deleche, dipped in coconut and coated in chocolate. We spread one biscuit with dulce de leche and then secure another biscuit on top. Then  rolled the sandwich biscuit in desiccated coconut and dip it in the liquid chocolate and eat! I can't say that I loved the bitter tea but I certainly did the alfajores! And apparently Argentinians do too as they consume reportedly six million of these biscuits a day and it is how they ingest 50% of their chocolate and dulce de leche consumption. 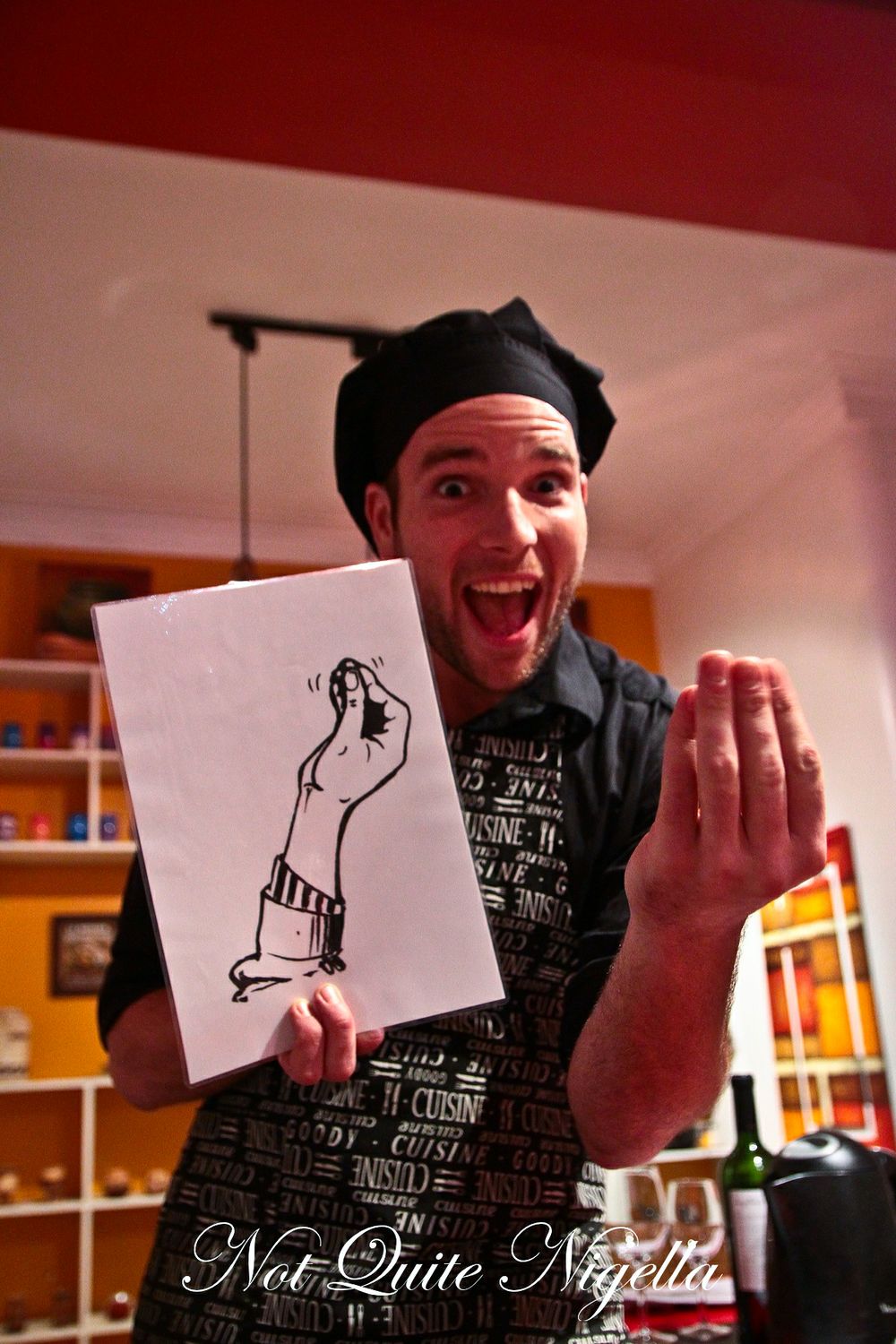 And how do you pick up Argentinian in one day? Well Leon shows us the ten most common gestures. He tells us that Argentinians speak with their hands using a lot of body language and he tells us that because of this, they are very easy to read. This gesture above means "Are you scared?" the crab shape pertaining to a certain orifice that puckers when scared.

He next shows us this one which is used when a girl muscles in on your man and is the favourite "What up b*h?" He gives us one last warning and that has to do with the currency. Many counterfeit $50 and $100 notes are passed around, even from banks (Leon's tip is to use a foreign bank like HSBC) and the keys to finding the authentic notes are to look for the watermark and the serial numbers. Taxi drivers have been known to take a $100ARS note and then grab a counterfeit one and then claim that your note was the counterfeit one. The way around this is when you hand the driver the note, tell them and point to the last two characters of the serial number which means that they cannot switch the note for another. 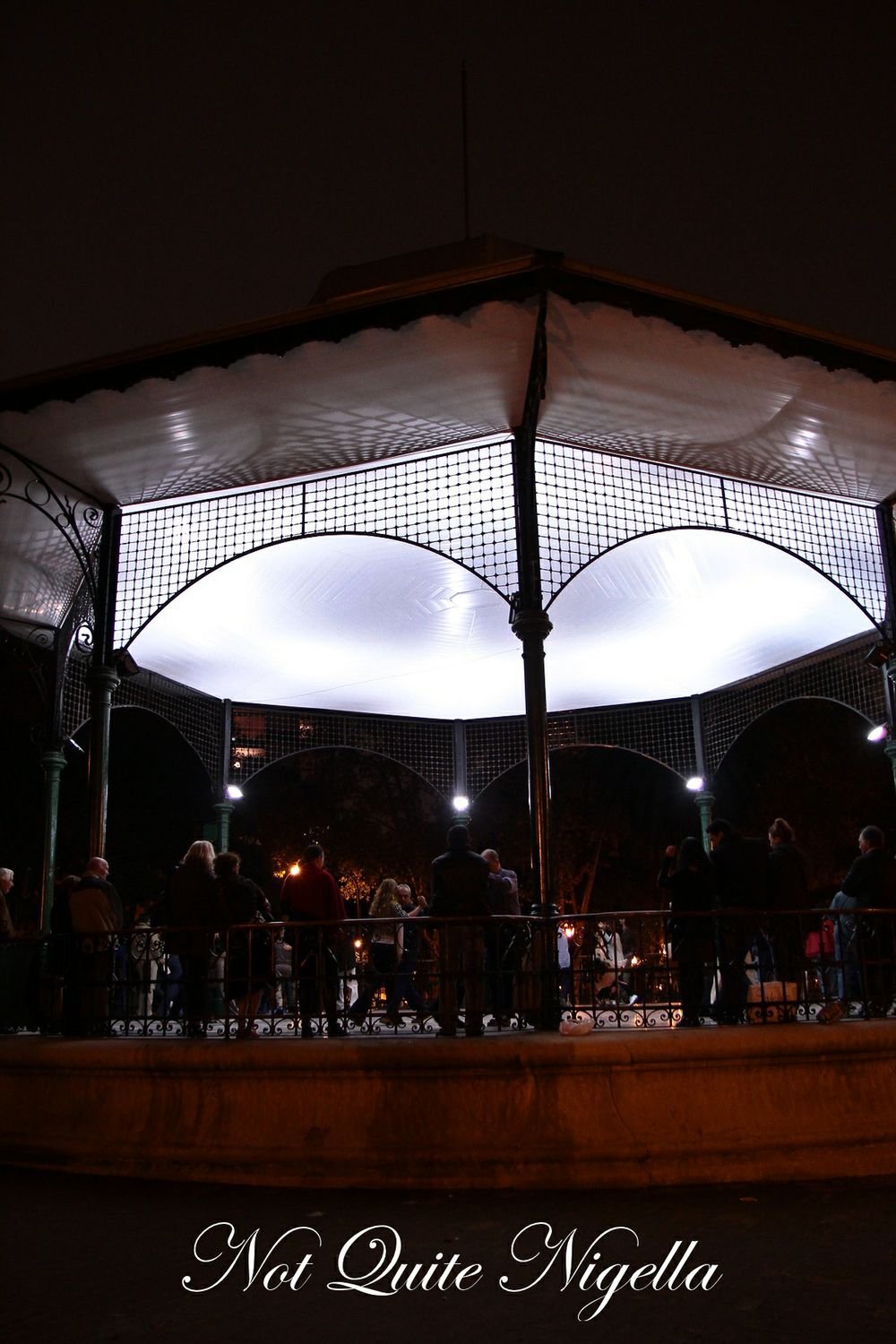 So what is one to do when they've eaten their fill of Argentinian beef for two days in a row? As much as I love beef, eating it that often ensures that I am never hungry. And what better way to work it off than with some open air tango? 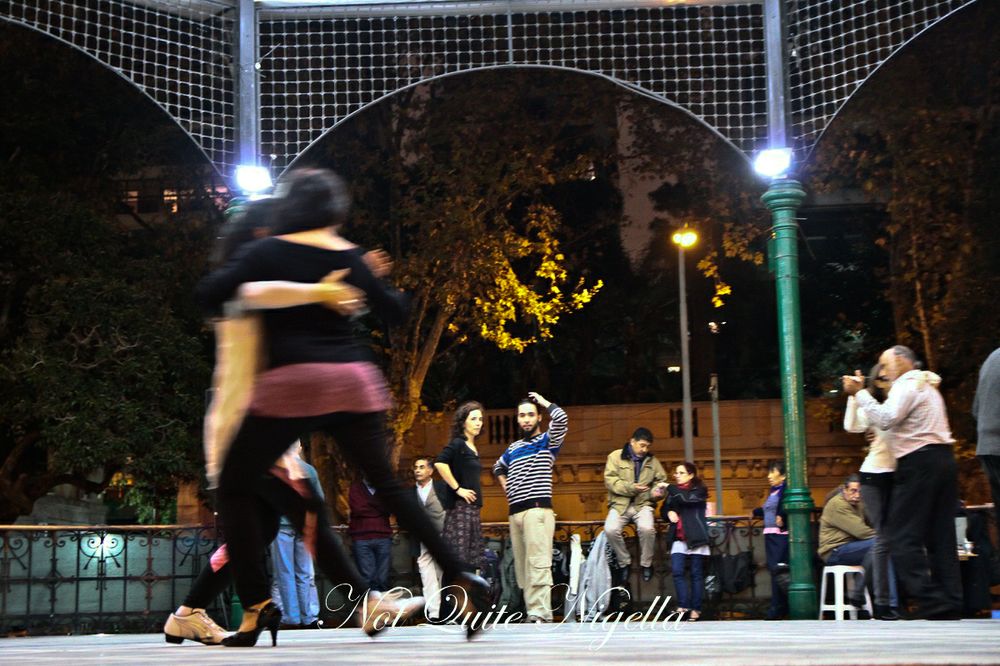 Held every Friday, Saturday and Sunday nights from 7pm till 10pm, men, who are sweet and mostly of the octogenarian group, stand in the rotunda on the side waiting for their tango partner for a dance to appear. Women turn up and change into spindly stilettos on the steps and twirl their ankles in preparation for the dance of love and passion. 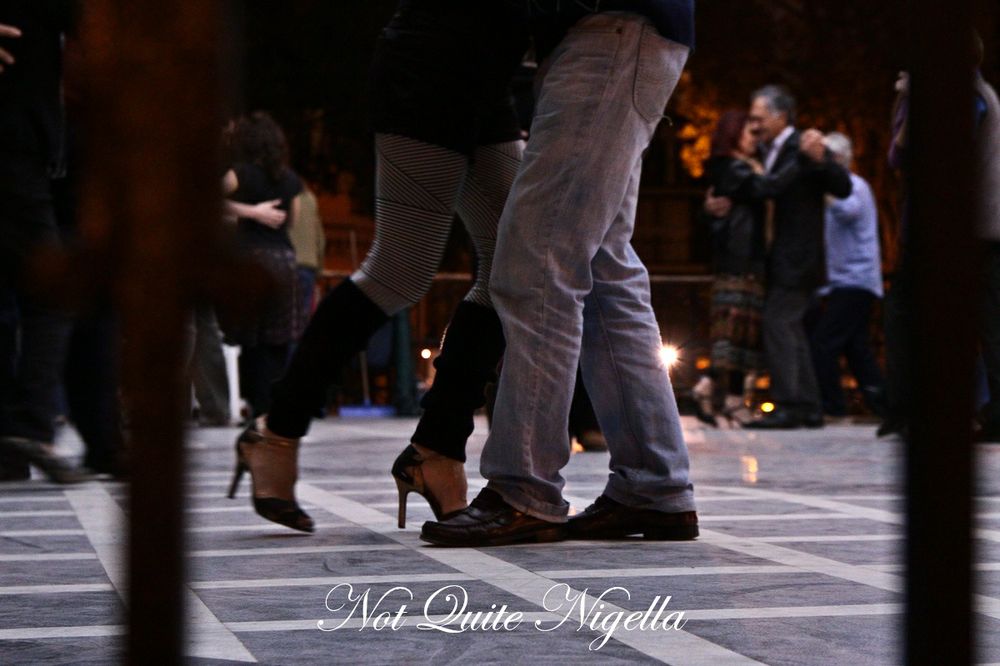 Their steps are rhythmic, their heads pressed together and they twirl and turn as if held together by a puppetmaster's string. Some are born tango dancers their dance cards full with a range of partners waiting their turn to dance. As for us, we're all too uncoordinated to even try to attempt the moves and even a sweet offer from a man to teach us to dance isn't quite enough for us self conscious Australians to come out of our shell.

So tell me Dear Reader, do you like dancing? And have you ever tried Heston's method for cooking steak? 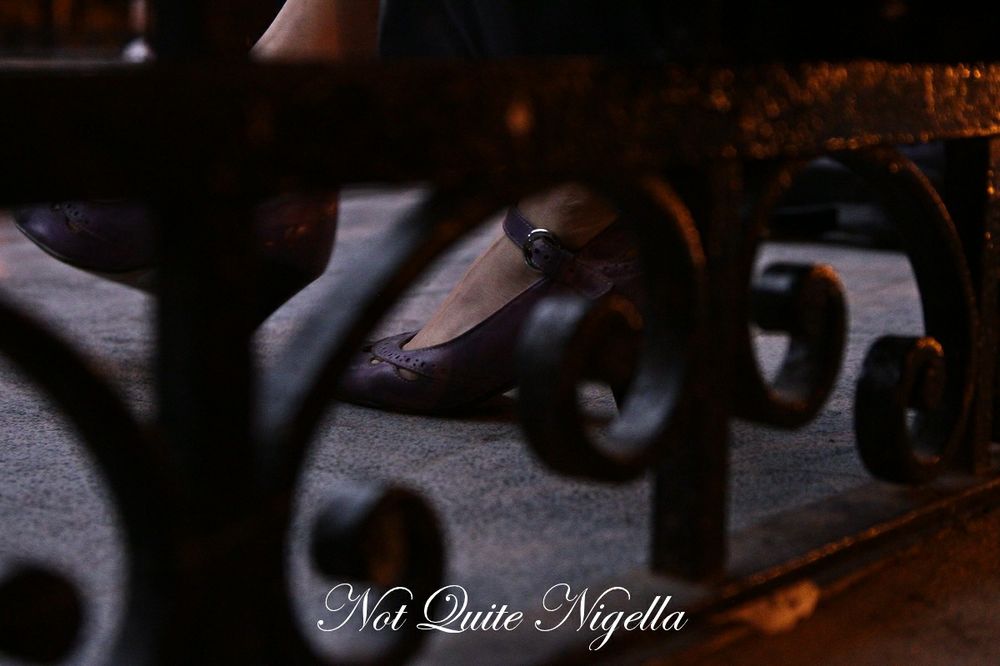 NQN travelled around the world as a guest of Accor hotels, Skyteam and Rail Plus