Easy Pork Scratchings That You Don't Have To Deep Fry!! 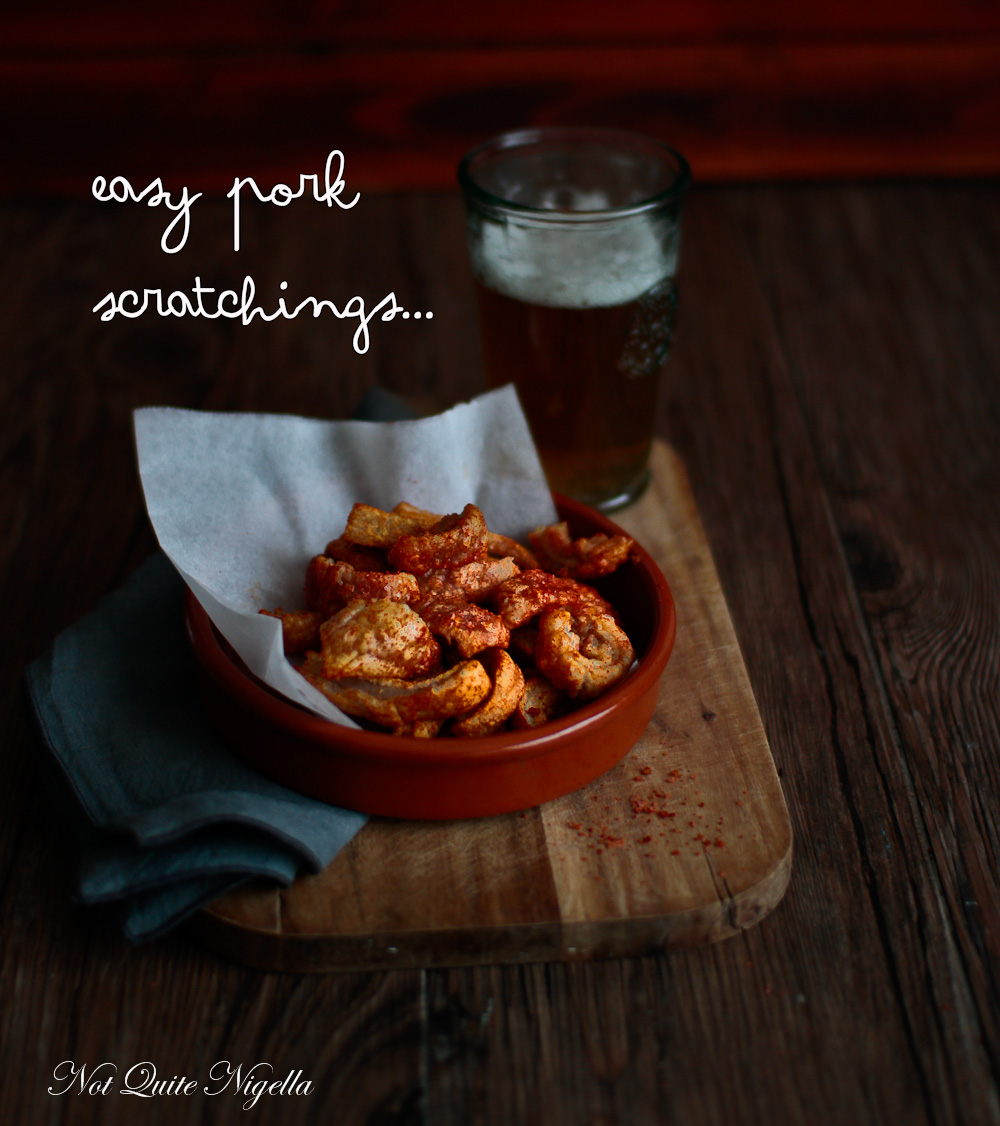 Are you someone that covets the crispy, crunchy pork crackling whenever you make a roast? Well I've got the easiest way to make a delicious beer or drinking snack of pork scratchings. And don't worry my loves because there is no deep frying involved!

I used to think that you had to deep fry pork rinds to get the absolute best pork crackling and truthfully it is the quickest way to get them as it takes just over a minute. But I realised that a lot of you are like me, only deep frying maybe a couple of times a year if that. While deep frying is fast and tasty, the smell of deep frying pervades your house and not in the same appealing way that baking does. But I found that you can make superb pork scratching using just salt and a really hot oven. And just for research purposes I also deep fried some just to see what the difference was. And funnily enough out of the two I preferred the oven baked version!

There are some times when deep frying is worth it and produces a different product entirely. Donuts are an example and these are relatively safe to fry as don't really spit at you as there is hardly any water in the dough. But if you don't have to deep fry, there's no point is stressing about spitting oil. I was cursing having to do this for research as I find that I always tend to get oil spitting on my arms and my face. And although my face isn't really making me a fortune, I knew that I had to be on tv the next day.

Excitingly, this year I've been invited to be a regular on Channel 9's Today Extra doing a cooking segment! I was so excited when they asked me at the beginning of the year. They asked if I could do it once a week. Alas with my travel schedule I regrettably had to tell them that I couldn't do it weekly. And I haven't mentioned it up til now because I've been worried that they'll throw up their hands and say, "Look your schedule just doesn't work with ours so we're going to have to let you go," but they've been accommodating!

The segments are mostly for making simple things-so far I've made things like microwave cheesecake, rocky road and rice cooker chicken. The hosts and crew are so lovely to work with and it's nice to get my hair and makeup done once a week! And playing off the two hosts is great too. David Campbell is super friendly although he is a bit mischievous and has to be supervised so I usually give the very nice Sonia Kruger or Georgie Gardner the more difficult task as he loves to approach each task with great enthusiasm and vigour - sometimes too much!

So tell me Dear Reader, do you covet crackling? And do you watch Today Extra? Do you have a fear of deep frying?

*My butcher was selling the rinds already scored. As you can see one was scored criss crossed and the other straight down. They were $12.99 a kilo but the rinds are light so it was very inexpensive to buy them. 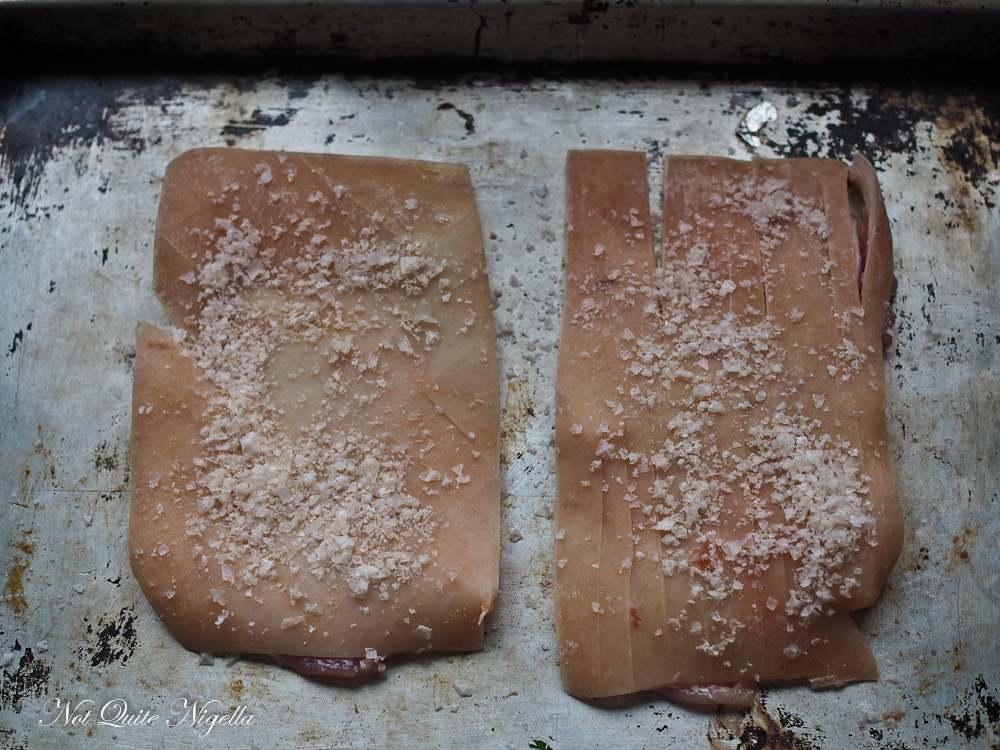 Step 1 - Sprinkle and rub salt on the skin side of the pork rind. Mine didn't have a lot of meat on it and just a bit of the fat but trim it if you have meat. Allow to sit with the salt on it for 20 minutes. Once the time is up, pat any beads of water with paper towels. 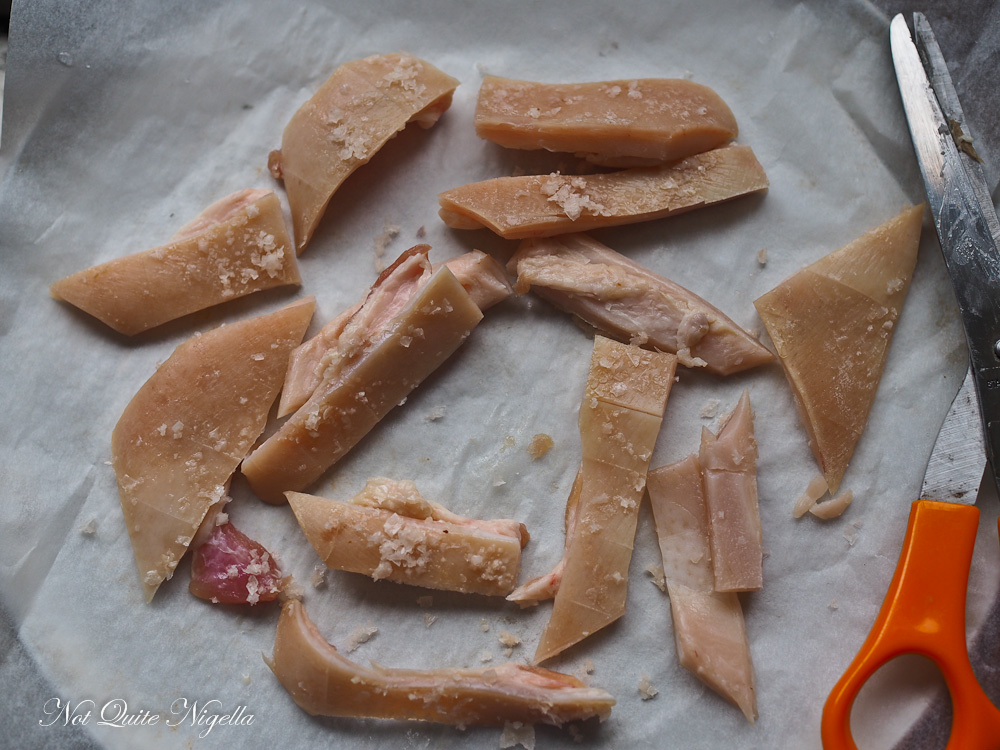 Step 2 - Preheat oven to 220C/440F and line two trays with parchment. Cut up the rind into 1 cm or 1/2 inch thick pieces using a sharp pair of scissors. Rub the salt back into the skin that has fallen off and then place on the trays skin side up. Roast for 20-25 minutes or until blistered. 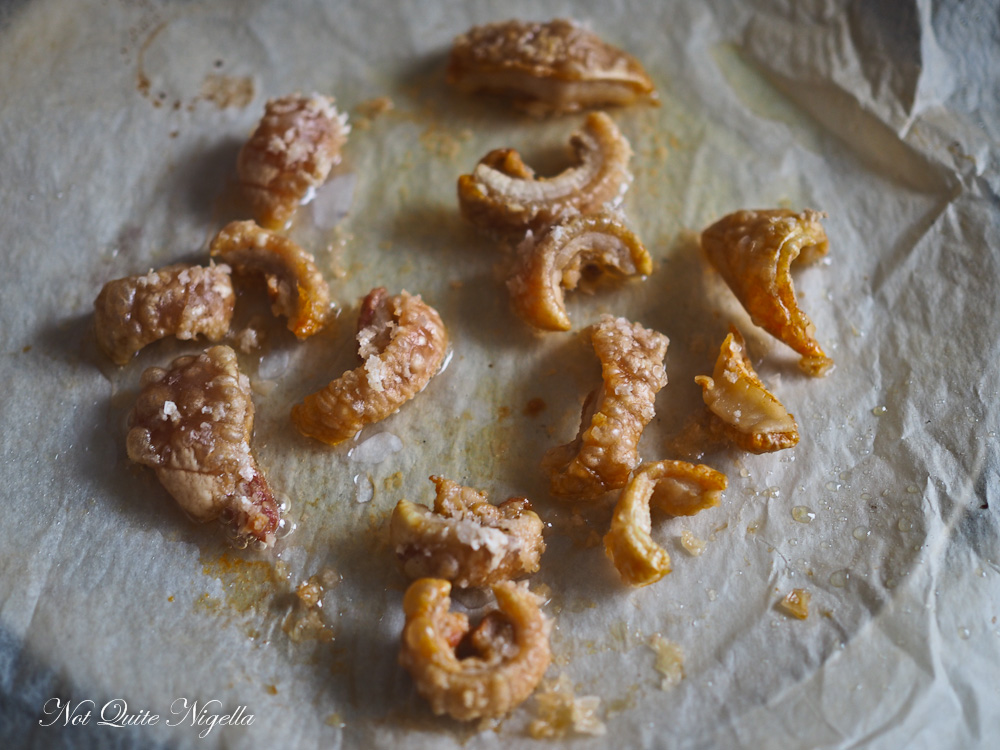 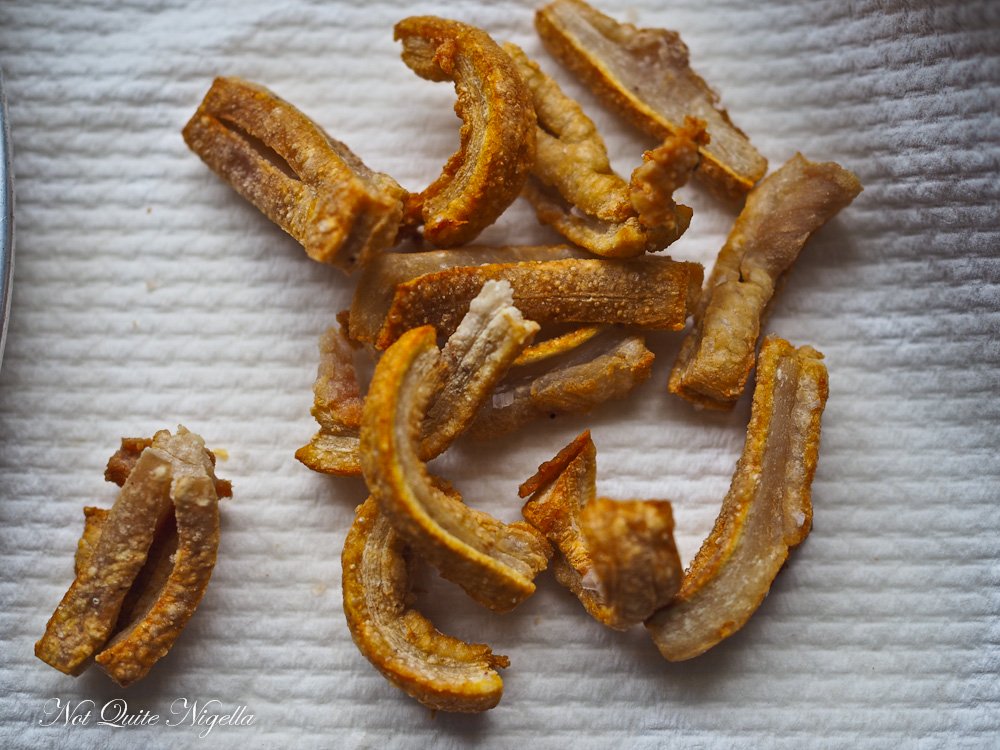 Note: you can also deep fry this which is faster and produces a different texture. I find that roasting it makes it super crunchy and prefer it this way. 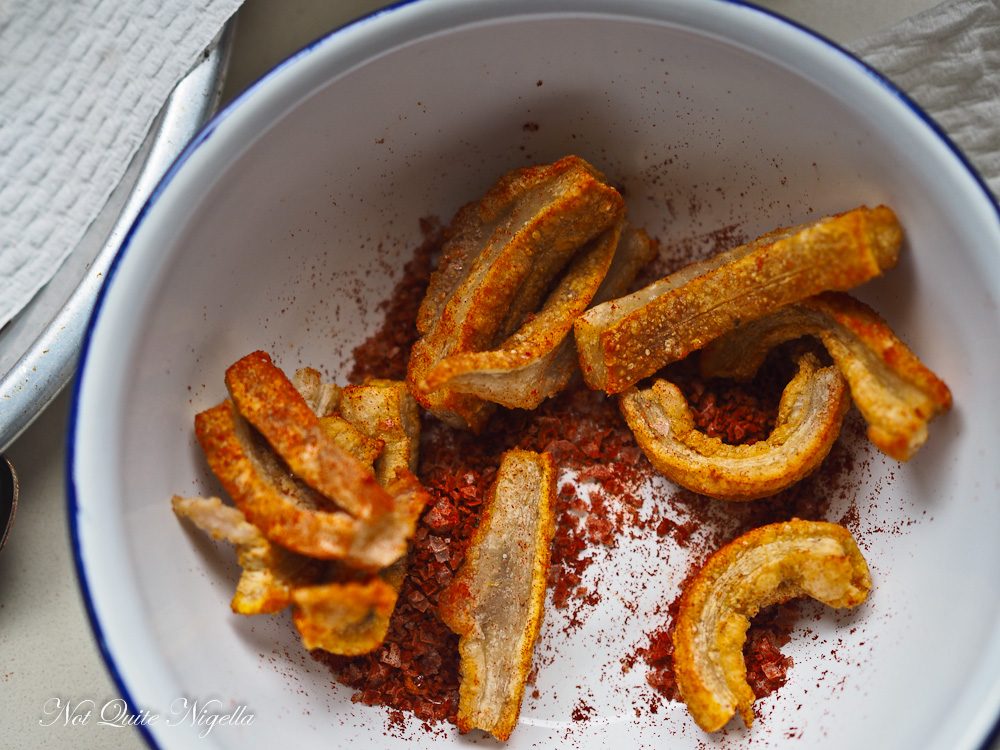