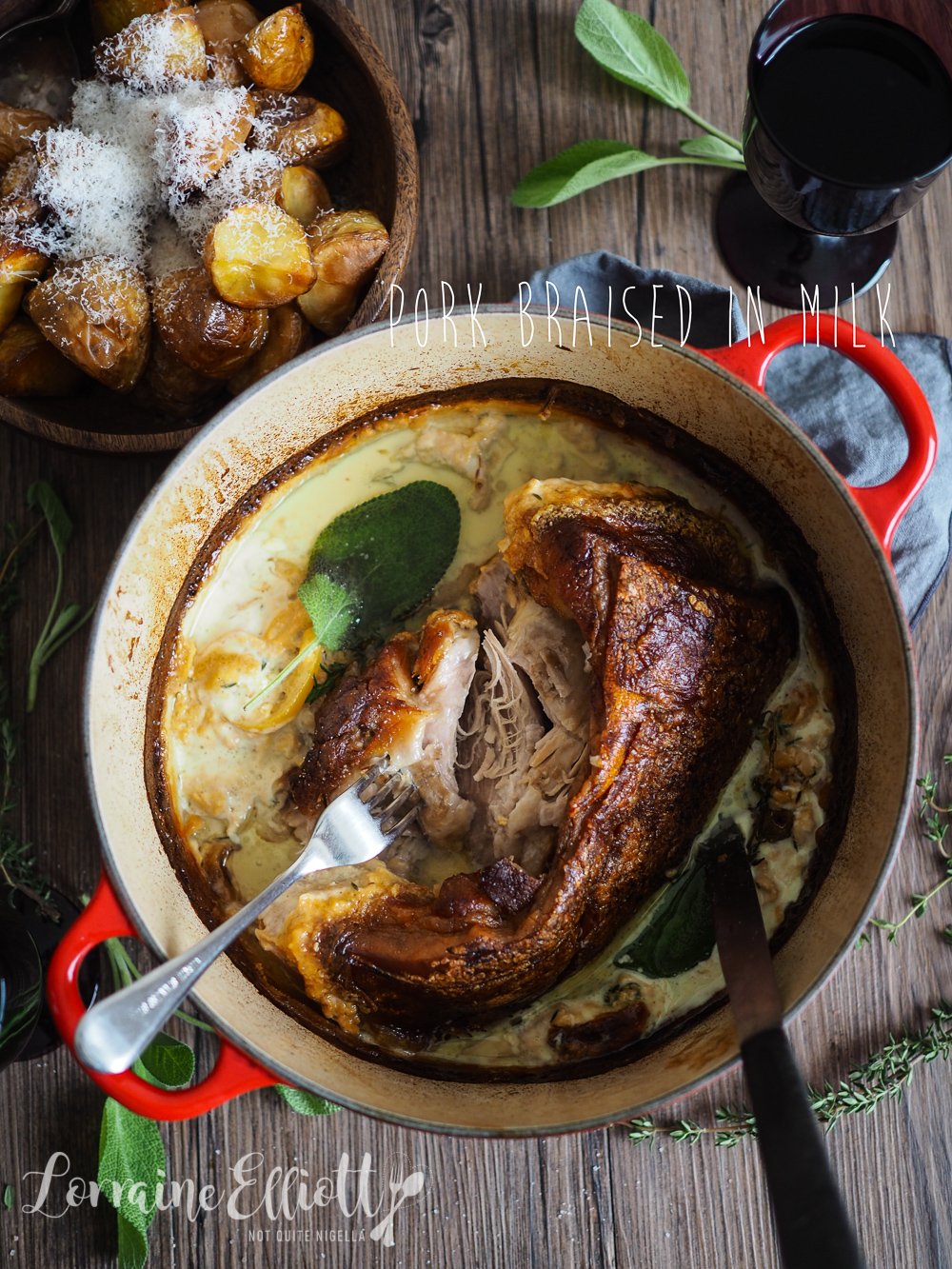 My favourite part of winter (and honestly really the only part I like) is the food. And this Maiale al Latte (pig in milk) dish comes from the depths of winter when your core is chilled and you need to warm up from the inside out. This Italian pork in milk dish is pure pleasure and is a pushy recipe if you love rich flavours and soft, fallapart meat.

The reason why this works so beautifully is that the lactic acid in milk cooks the pork and breaks it down so that it becomes meltingly soft. Best of all, prep is done in less than 10 minutes as everything is thrown into the one pot. It's the original low prep, slow cooking dish that delivers flavour in spades!

Many areas of Italy lay claim to this pork dish (Tuscany and Bologna to name a couple) and nobody has come to any sort of agreement, except to say that it is absolutely luscious. Braising meat in milk is really no different from braising meat in wine or stock. I'm amazed that I don't see this more often as the pay off is so huge for the amount of effort (all it requires is patience) but perhaps it is because it isn't the most photogenic dish. 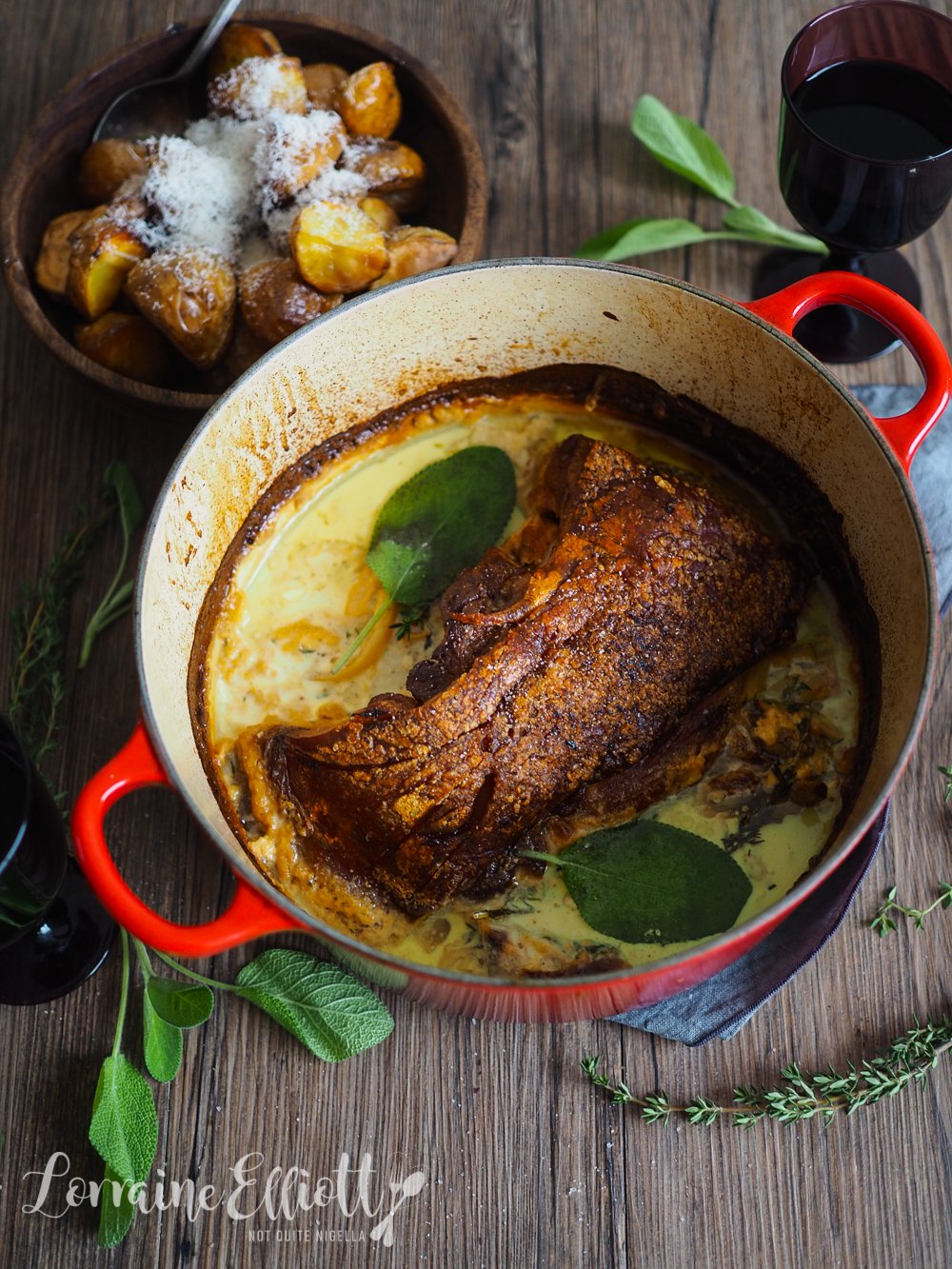 The reason why this is a bit of an ugly duckling is because the milk does curdle and separate so that what is left (before the final addition of cream or milk which is really just there to help it visually) doesn't look great as there are billowy clumps of curd and a watery looking sauce. I got around that by adding a bit of cream at the end which adds visual appeal but also mouthfeel. Stick a fork in it and you'll be rewarded in a way of an intrepid traveller.

You can choose your favourite pork cut-some like loin but I love the unctuous shoulder. Some say that this dish is hard to screw up and I'd have to agree. I probably don't have to tell you that you need full fat milk. I don't want to be one of those superior types that gives you lots of rules or sneers at things but by the same token I don't think that this is the dish to be counting calories with or making calorific shortcuts (you probably won't like the number).

Speaking of shortcuts and timing Dear Reader, I have a question for you. How long do you give books, tv shows or movies? I was chatting to Nina about it and she was saying that she didn't like a television show she was watching but she had given it 2 episodes. This floored me a little as I am discovered I am much more ruthless. A television show has 20 minutes or max 30 minutes to grab me or I am out. 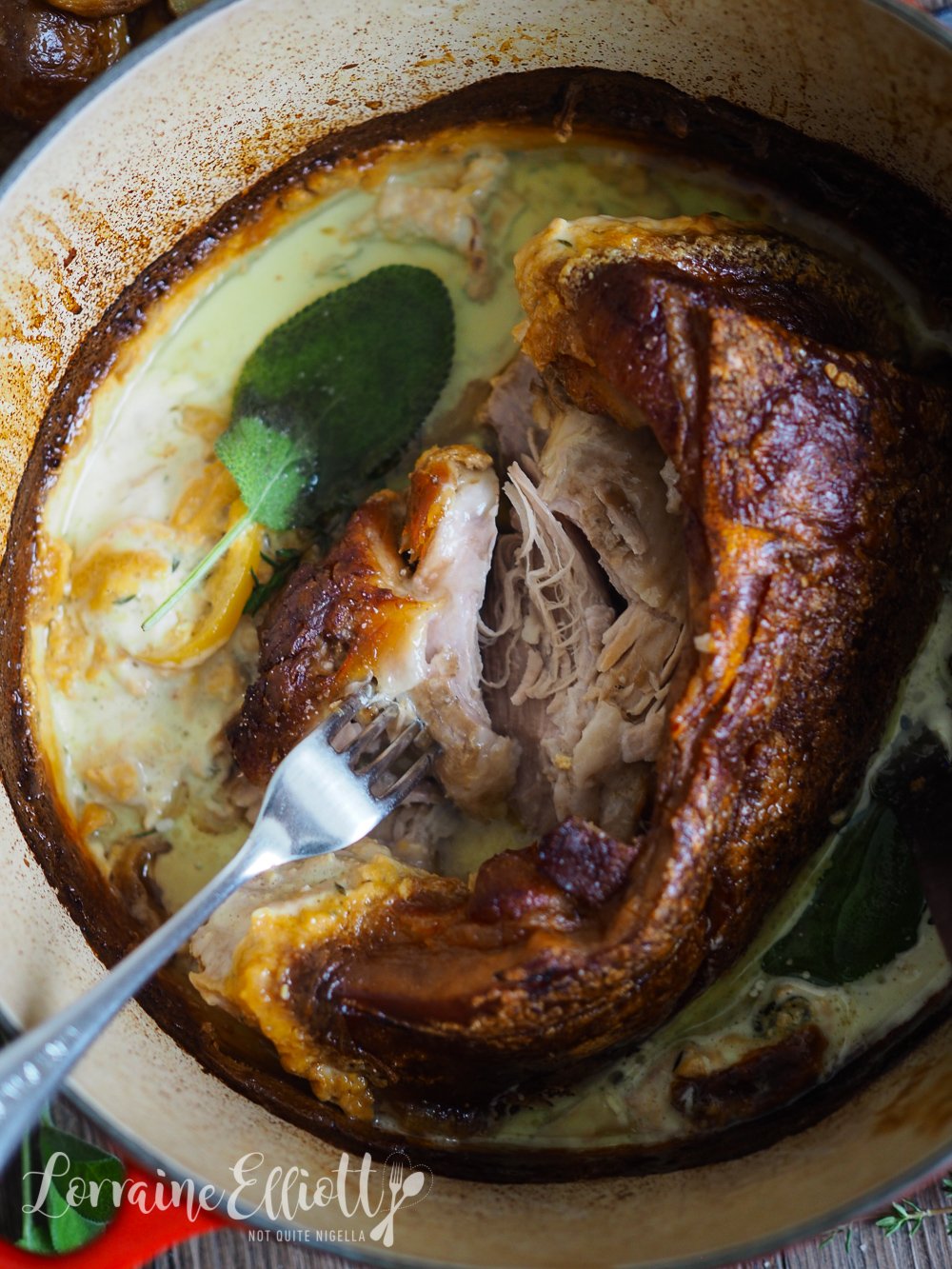 Likewise my lovely blogger friend Tandy will persist with a book while I give it a chapter and then I am done. I guess I should give things more of a chance but a part of me thinks that life is too short to dither and dabble in something that I feel lukewarm towards! I'd rather spend time waiting for food...

So tell me Dear Reader, how long will you give a television show or book before you decide whether you are done with it? Have you ever tried braising in milk?

Prepping the pork for maximum crunchy crackling (optional): I like to dry the pork rind out for a couple of days in the fridge so that I get super crunchy crackling. Just place the pork skin side up on a rack in the fridge uncovered and sprinkle with salt and it will develop a waxy, dry coating. If it is wet when you get it (sometimes when it is packaged in plastic it is a bit wet) then blot the moisture with 2-3 paper towels. 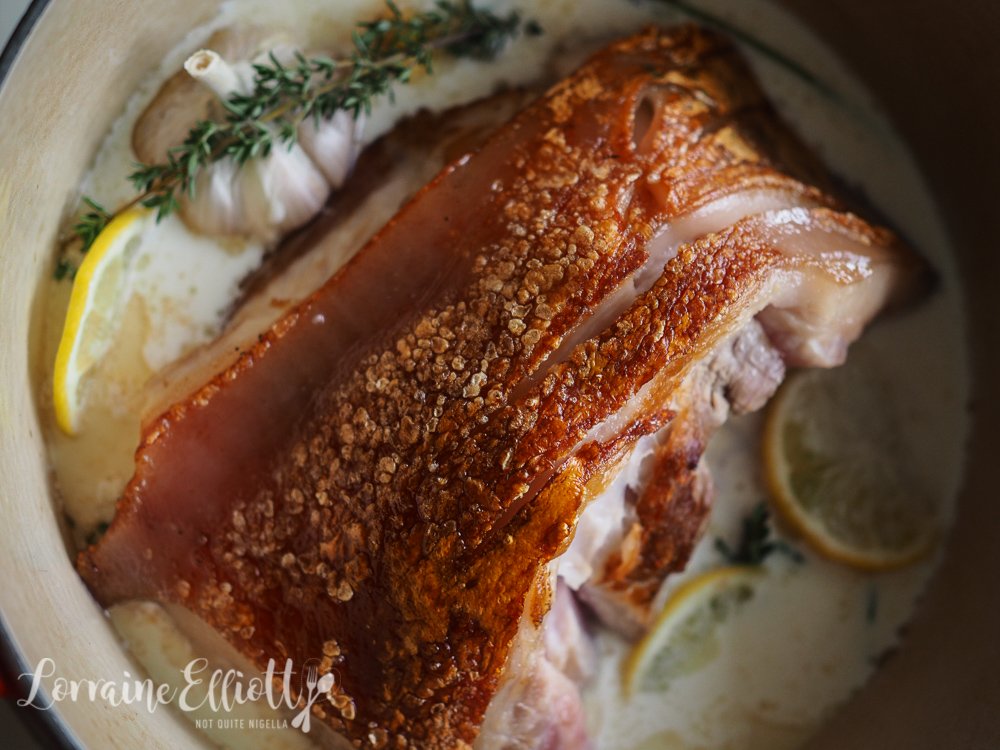 Step 1 - Preheat oven to 180C/350F and heat a large cast iron pot on medium heat. Add a little oil to the pot and crisp up the skin and brown the pork on all sides. Place it skin side up and add the garlic, sage, thyme, lemon and 3 cups of the milk making sure to not pour the milk on the skin. Roast for 45 minutes uncovered until the crackling is golden brown. 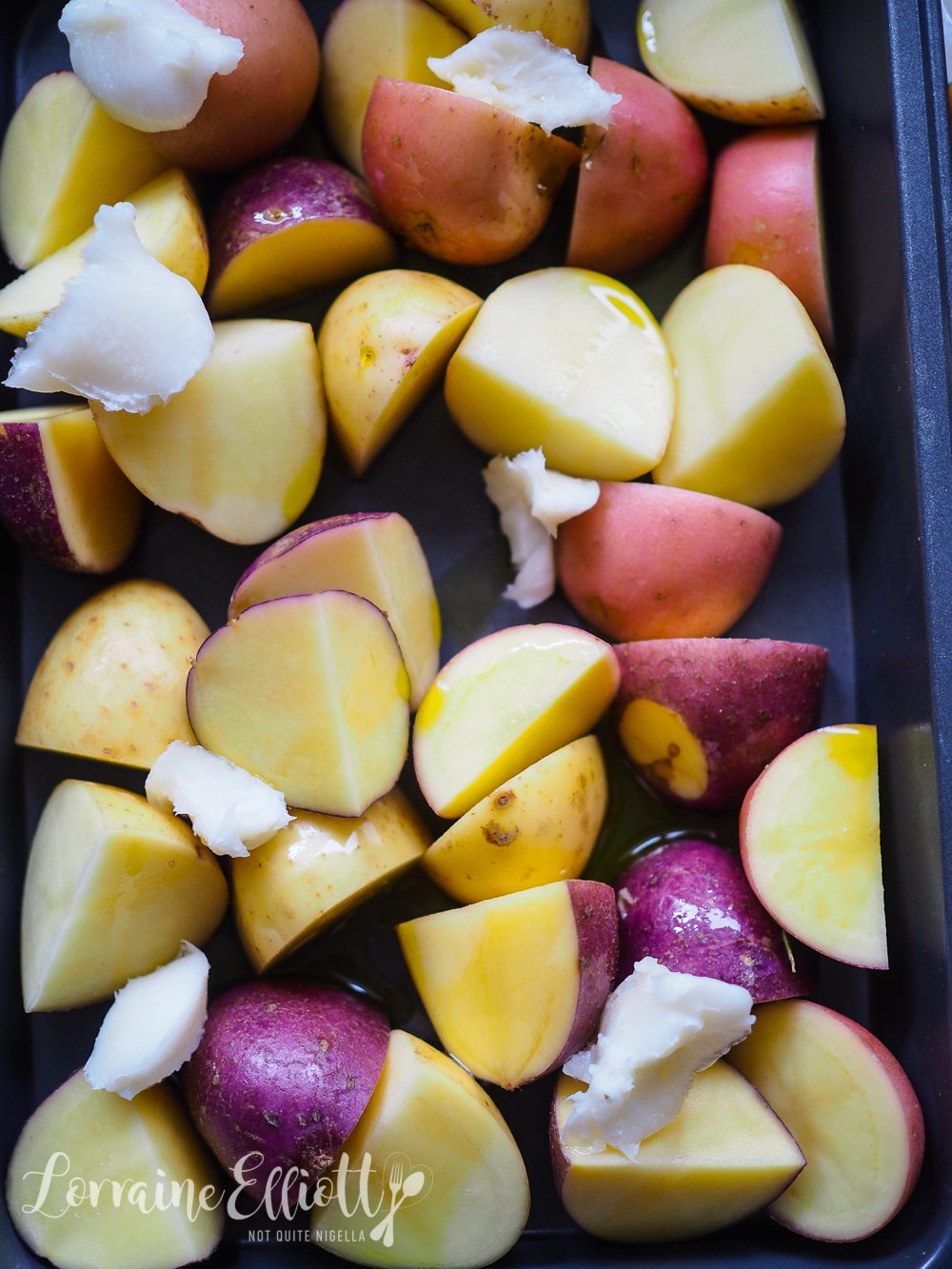 Step 2 - Add oil to the potatoes in a tray and slow roast them with the pork - they take around 1 hour 45 minutes (I also added some pork fat to the tray). When the potatoes are ready, sprinkle with grated parmesan cheese. 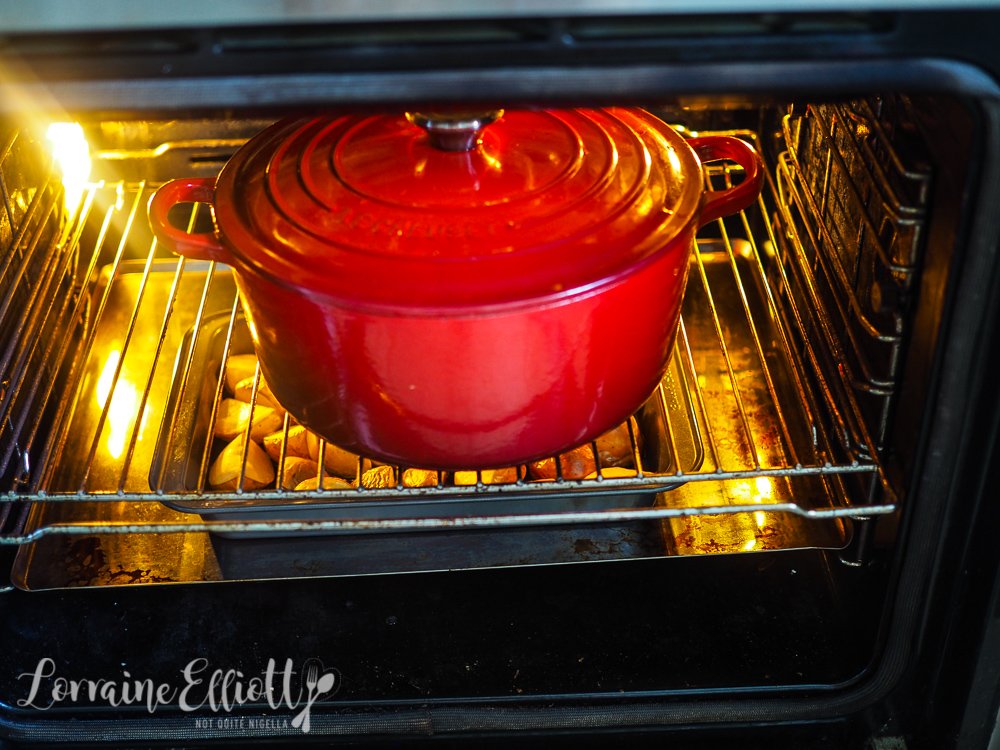 Step 3 - When the pork has a golden brown crackling place the lid on the pot and cook for an additional 2 hours 15 minutes adding the extra cup of milk halfway through. When it is done, stir in the last 1/2 cup of cream or milk and season with salt and pepper. 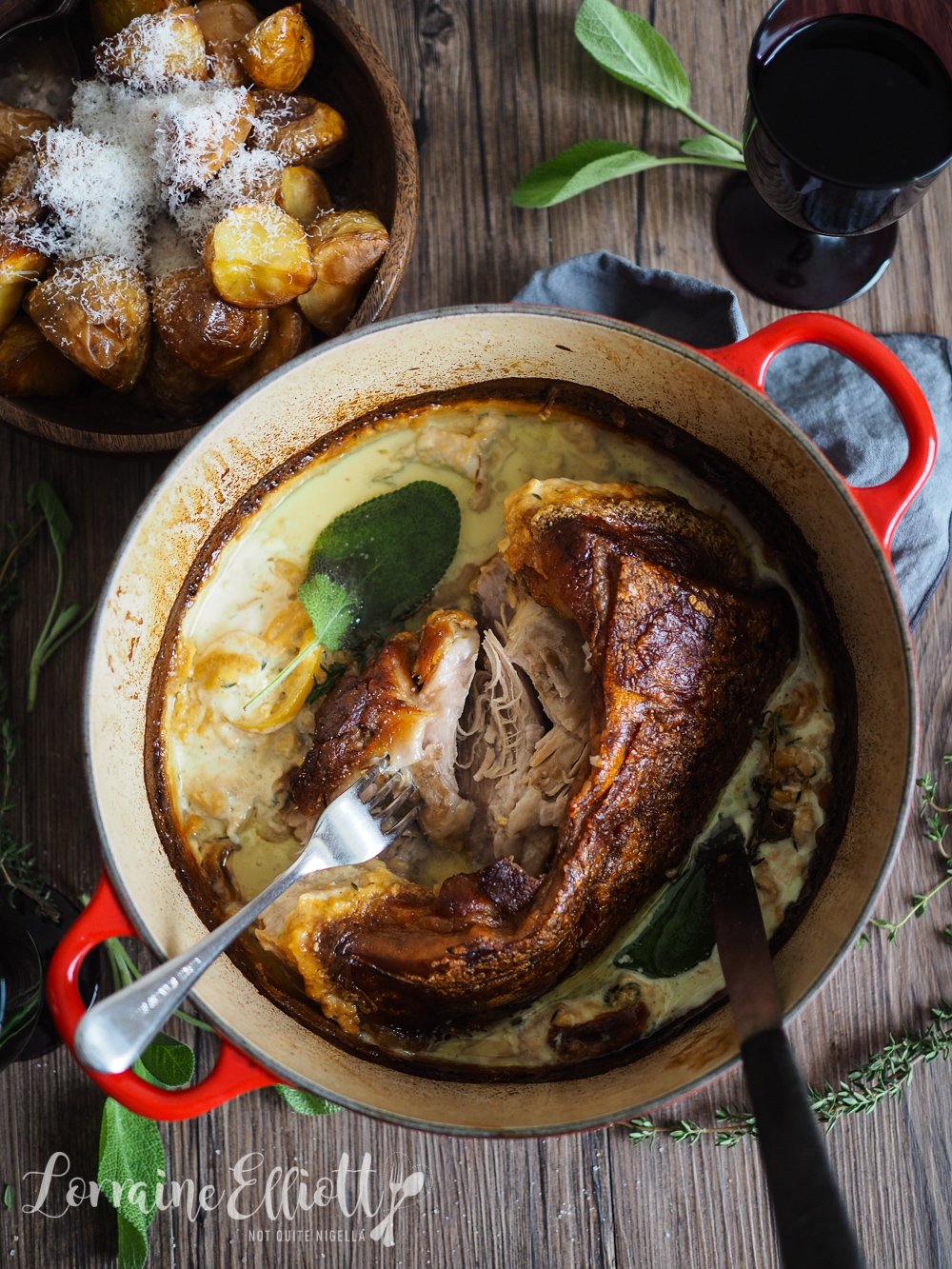