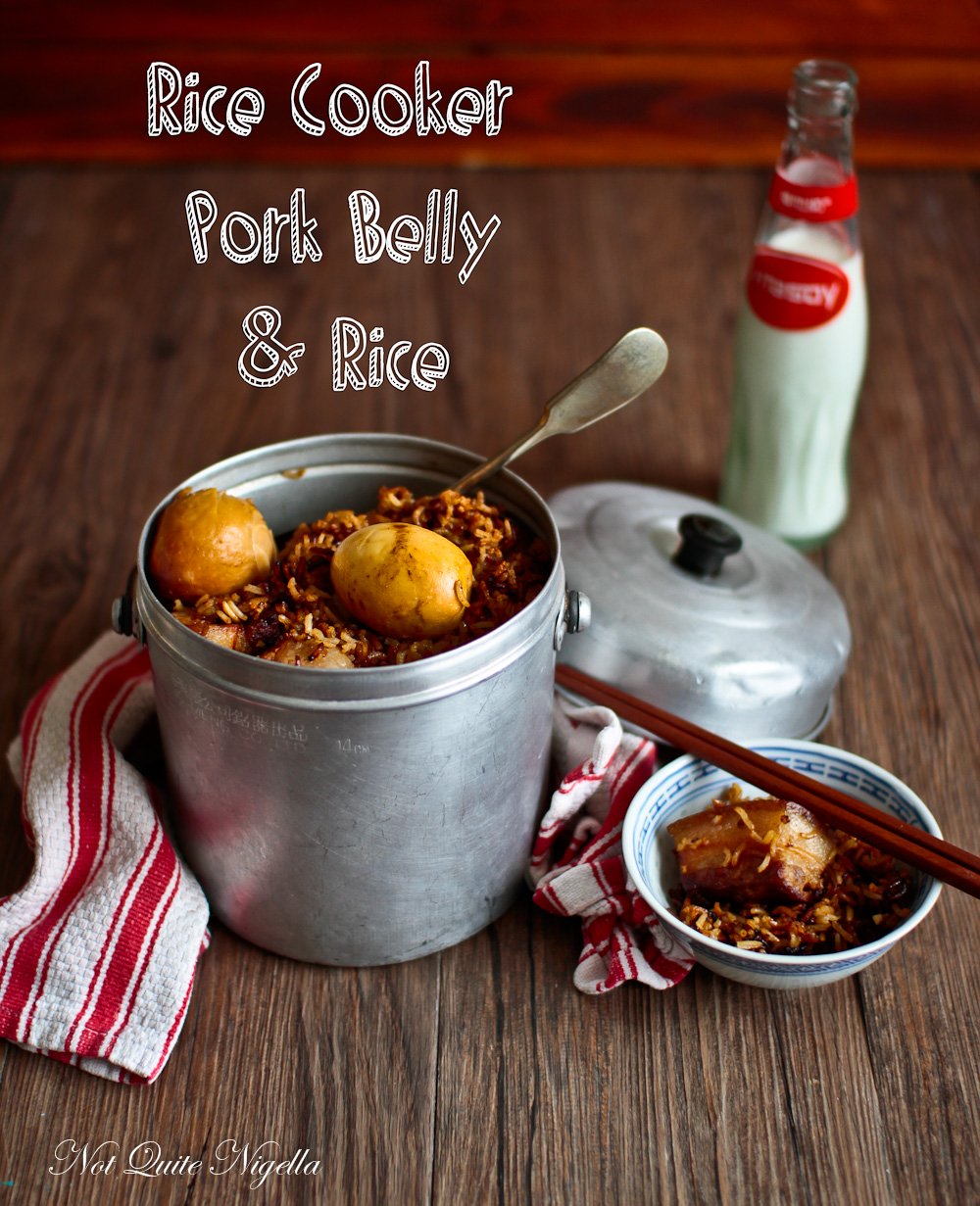 This ginger pork belly is all the best of flavours in one easy to put together one-pot recipe. Better still if you have a rice cooker you could have your very own one pot meal while your rice cooker does all the work. This dish is made up of soft pork belly cubes, slow simmered until jelly soft and flavoured with soy, brown sugar, ginger and other Japanese flavours to produce a one pot wonder!

I've developed somewhat of a fascination with the rice cooker. I'm still using one borrowed from my parents. The switch cover is no longer there and I am a step away from buying my own because I'm worried that I'll get electrocuted by it. Despite the threat of near death I love it for one pot meals. I've made chicken in a rice cooker as well as chocolate cake. And I wanted to see whether I could make one of my favourite pork belly dishes in it.

I am excited to report that it worked out really well! I decided to add some boiled eggs to it and you could also add some vegetables like thinly sliced carrot coins or shiitake mushrooms to add to the flavour. It was a meaty few days for us whereas we usually like the alternate meat and vegetables. I had just made this and then we were going out to a Japanese barbecue dinner with our friend The Wizard who we haven't seen in months. He has a new job and a new girlfriend and has been travelling overseas a lot. 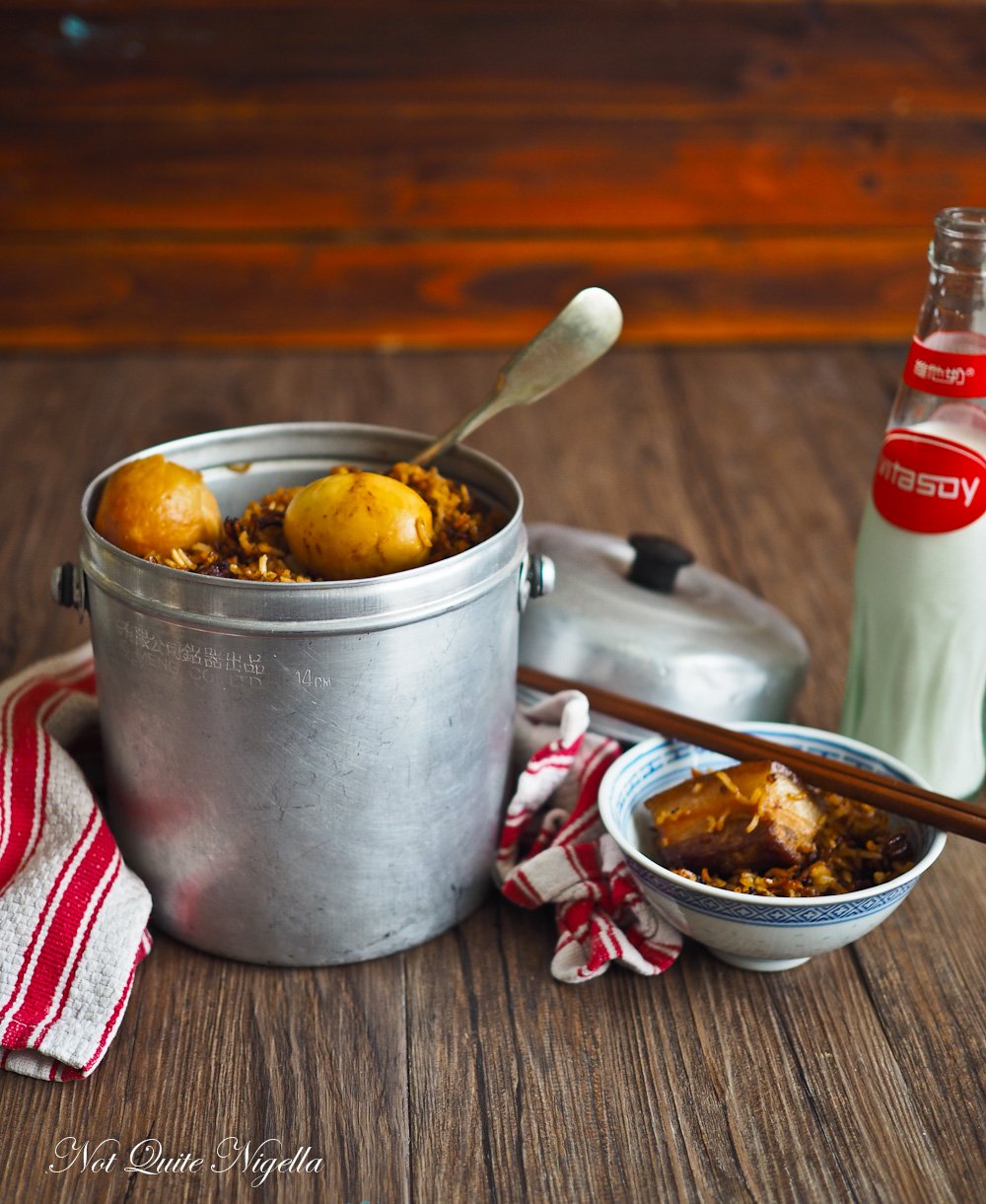 He told us about a bar that he visited in Los Angeles. In the room was a gorgeously dressed woman in a 1950's outfit. To get into the bar he had to guess where the secret switch was in the room. She merely watched him while he looked. After a while he gave up so she showed him where the switch was. The bed opened up and revealed a set of stairs underneath the bed which hid a speakeasy. He so loved the whole intrigued aspect to it and I realised that he might be the ideal candidate for our next escape room. We've done a few of these rooms where you are locked in a room and you have to find clues to get out. It's a little bit mystery and spooky and I love exercising the mind (it's much more preferable to physical exercise for me haha).

He was enthusiastic and said that he would join us on an upcoming escape room. "Can I hulk it out?" he asked. "Err no you can't," explained Mr NQN and we envisaged the Wizard pulling apart one of these rooms and bursting out within seconds having ripped it to bits. We may have some explaining to do... 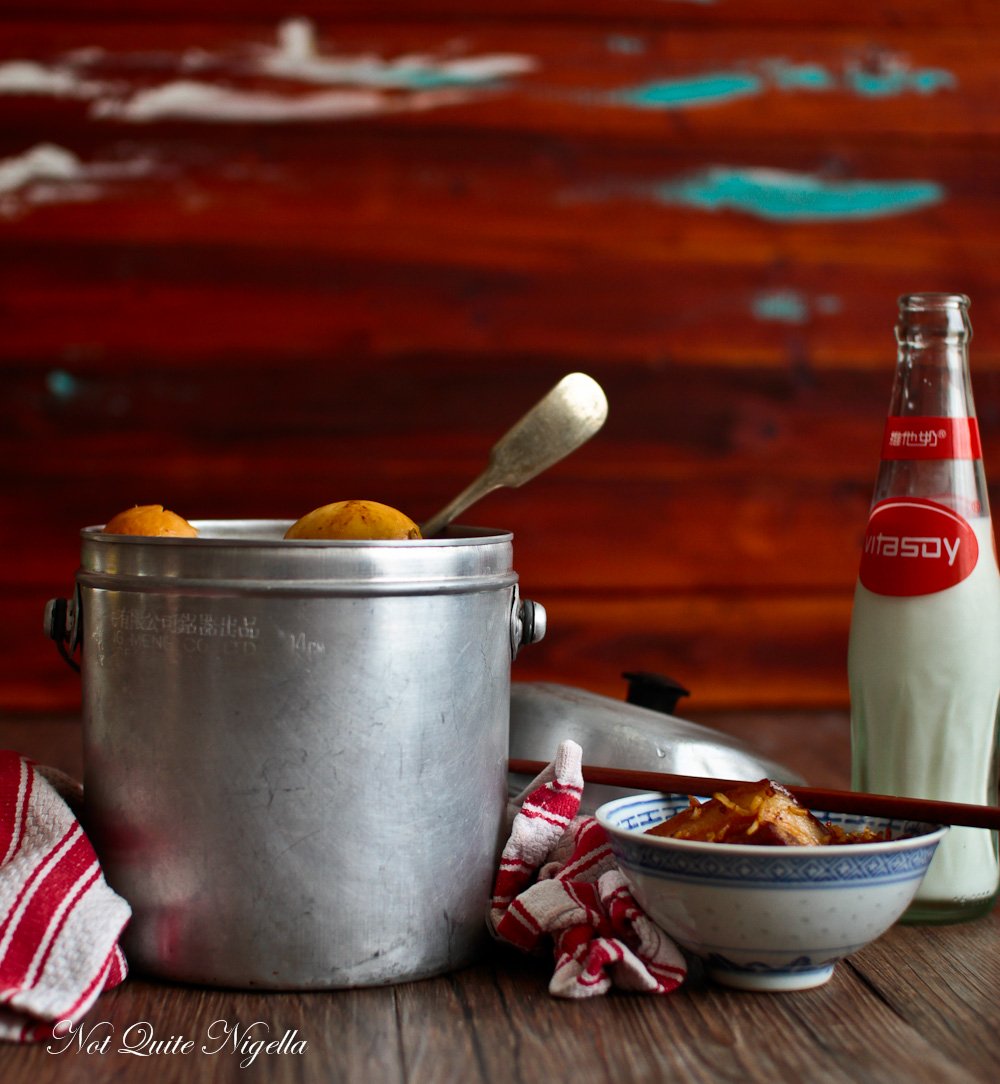 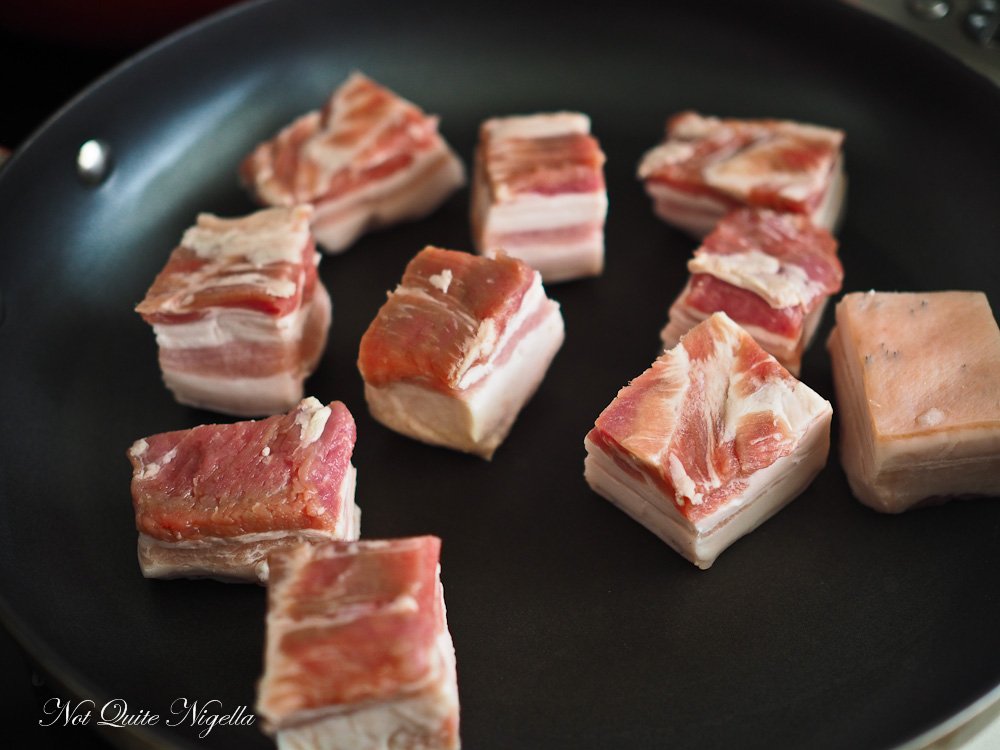 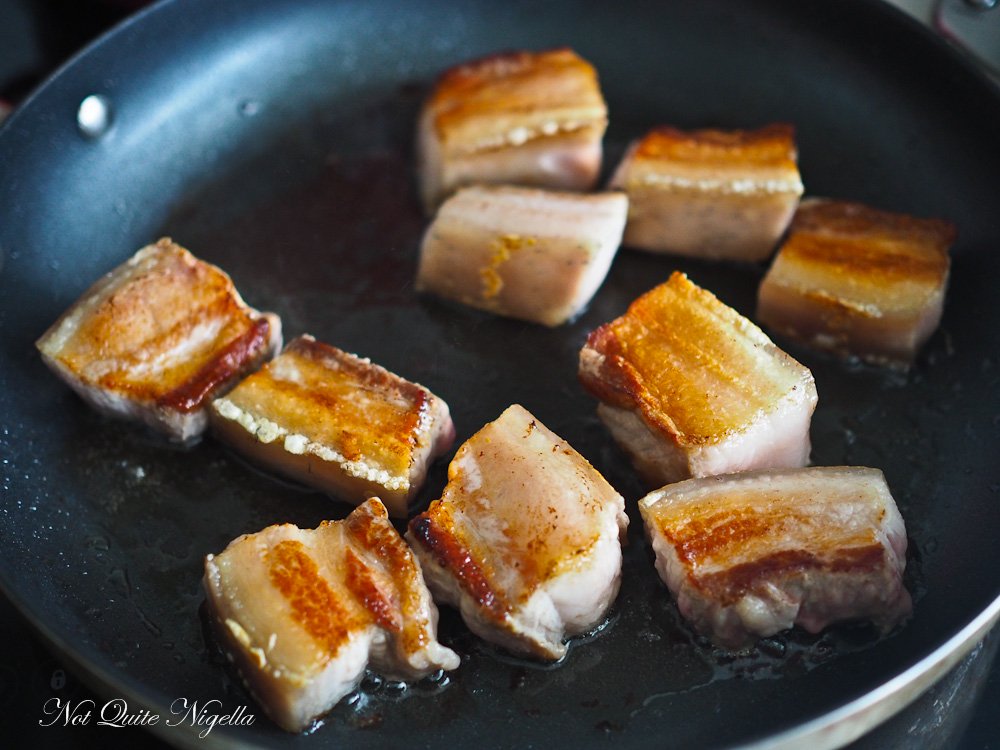 Step 1 - Heat a frypan on medium high and brown the pieces of pork belly on the sides to render the excess fat. Meanwhile rinse the rice well. I had to wash it 5 times to make the water run clear. Then add the eggs, ginger, stock, cooking sake, mirin, brown sugar, dark and light soy sauces to the rice. Top with the pork pieces once they're browned and turn on the rice cooker. If yours has a timer you can set it to run for 45 minutes. If yours has an automatic shut off it may turn off after 20 minutes or so. Wait about 5 minutes and then turn it back on. 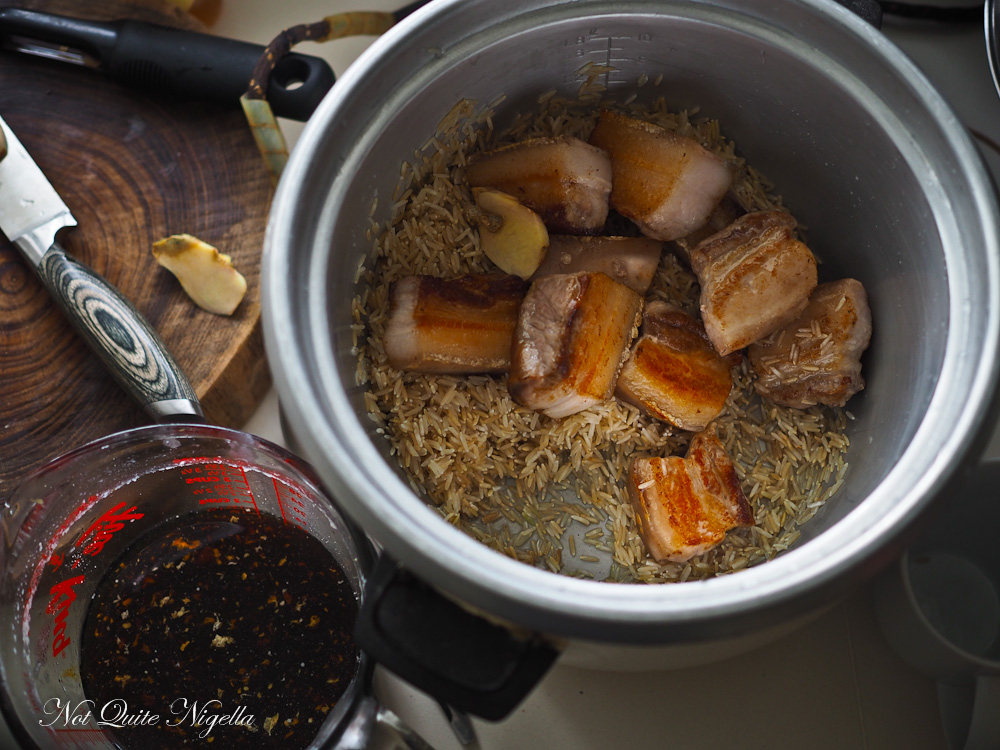 Step 2 - When the 45 minutes is up, fluff up the rice and mix it up with the pork and eggs gently. It won't be totally cooked yet so add the extra water and then cook it for another 15 minutes until the rice is cooked through. 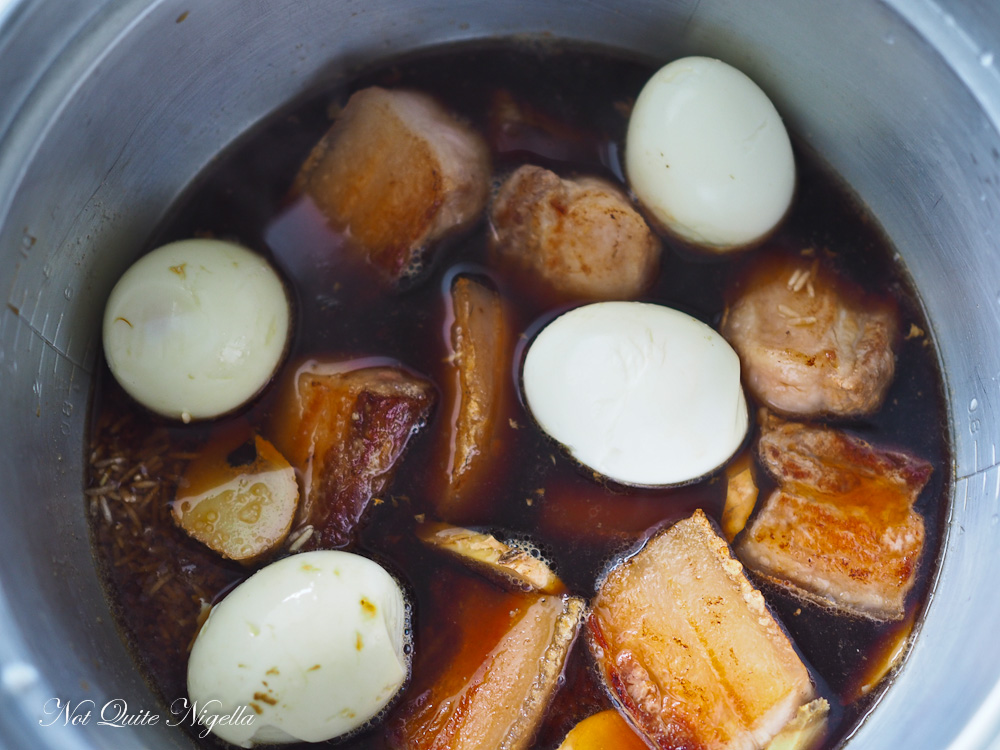 Variation: you can omit the rice and just cook this in the liquid in the rice cooker for the same amount of time. 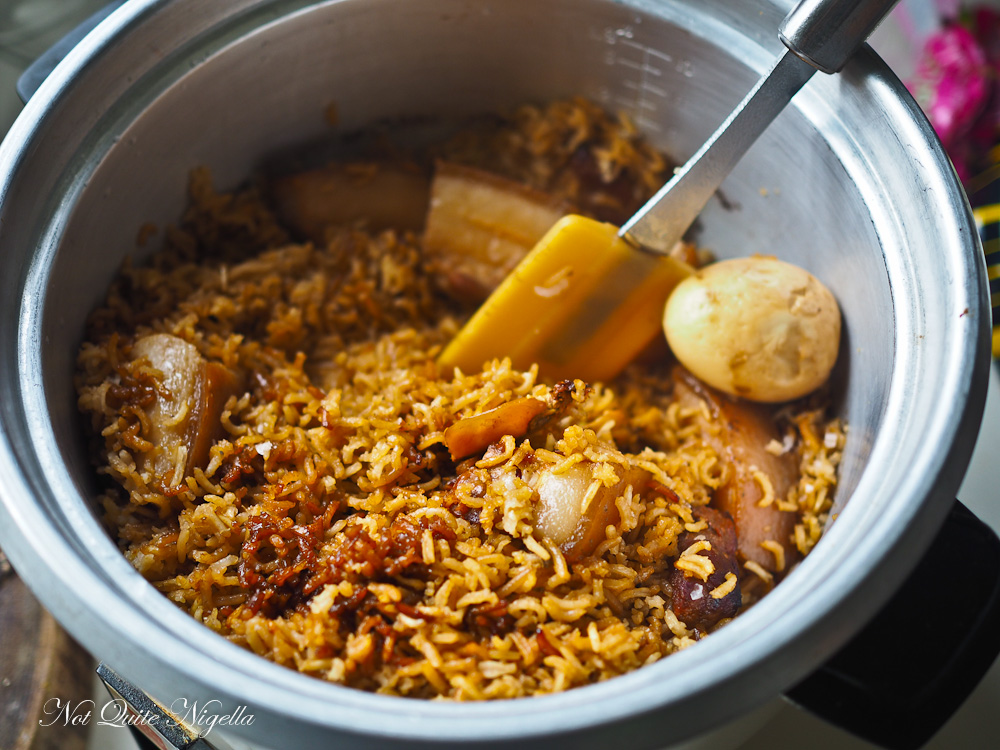