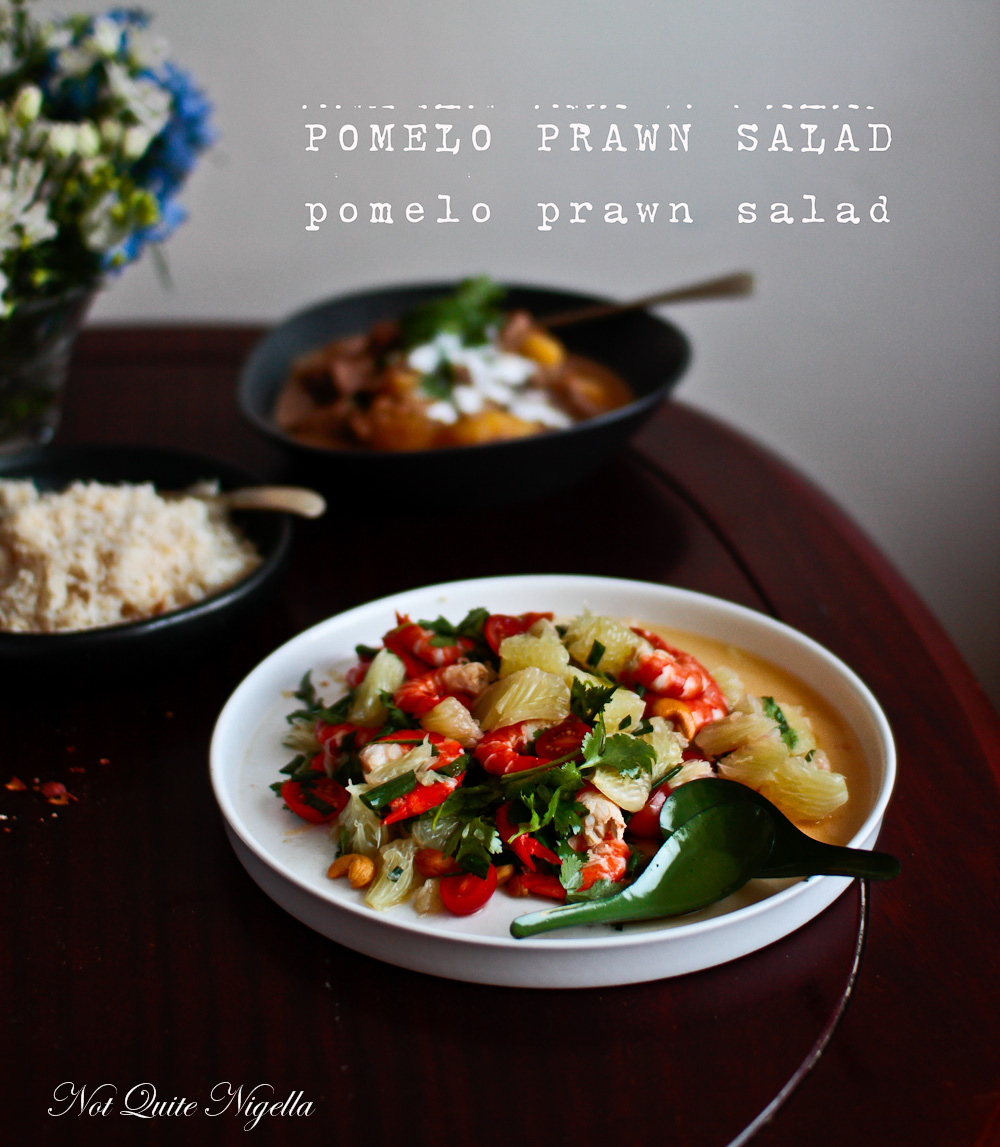 During Winter, like many people, we tend to eat a lot of slow cooked meats and warming stews and soups. The weather suits it and things like salads barely get a look in. And while we cook a lot of Thai food in summer it tends to be heavier more European based cuisine in Winter. But when I knew that our friends Queen Viv and Miss America were coming over all I could think about was making a pomelo and prawn salad.

Truthfully I'm being a bit of a baby-our winters are fine, some days go up to 18-21C/64.4-69.8F which is summer in some parts of the world. And when I spotted a display of pomelos at the market I knew that it was time to make this pomelo salad that I had on the "to make" list for the longest time ever since I visited Sri Panwa. For those of you that haven't tried pomelo before it's similar to grapefruit but has little to no bitterness to it. I actually don't like grapefruit at all but I absolutely love pomelo because it is sweet and segments really easily.

Whenever people come over I love to theme things, it's the inner Kath Day in me ("team with the theme") and then I added a Massaman beef curry to list for no reason other than we love eating this curry so I may as well learn how to make it. I will share the recipe for that soon. It's also a milder style of curry which would suit Queen Viv aka she who does not like chilli.

The pomelo and prawn salad is a breeze and I learned it at the Sri Panwa cooking class. The "yam" dressing is a simple mix of three things: fish sauce, lime juice and some sugar. It's a great all purpose dressing for a green papaya salad or a Thai beef salad (and honestly the proof is in the tasting, I had previously been using this recipe but this is so much easier and just as good). It's perfect for anyone in summer that wants to make something a bit different but very low effort. I mean you could practically be comatose and make it. I know, I've tried...

Over dinner Queen Viv told us about her recent trip to Italy with her sister. During her absence Miss America had looked after her new cat Stoagie. Her previous cat Radar had passed away and she had a close call with some cat con artists (read all about it here, it's a real thing!). But when there was a litter of oriental cats became available she hot footed it to the breeder to take a look at them. One tiny little kitten took a liking to her and started rubbing up against her and playing with her. 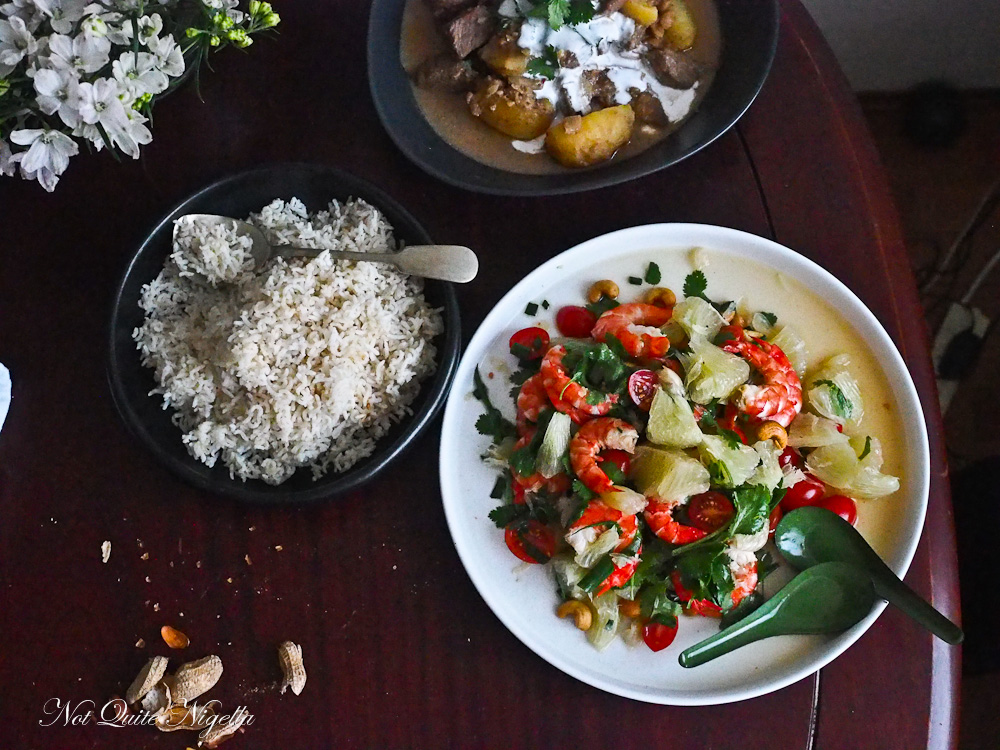 In that litter that was another kitten that was misbehaving and acting up. The owner regarded it and said "That one's a ratbag." She pondered it for a moment before saying "I'll take the ratbag." That is classic Queen Viv. Most of us would take the cat that we had bonded with but Queen Viv took the naughty one!

So tell me Dear Reader, do you find you eat heavier more European style food during Winter? And which cat would you have taken? Have you ever cooked with or eaten pomelo? 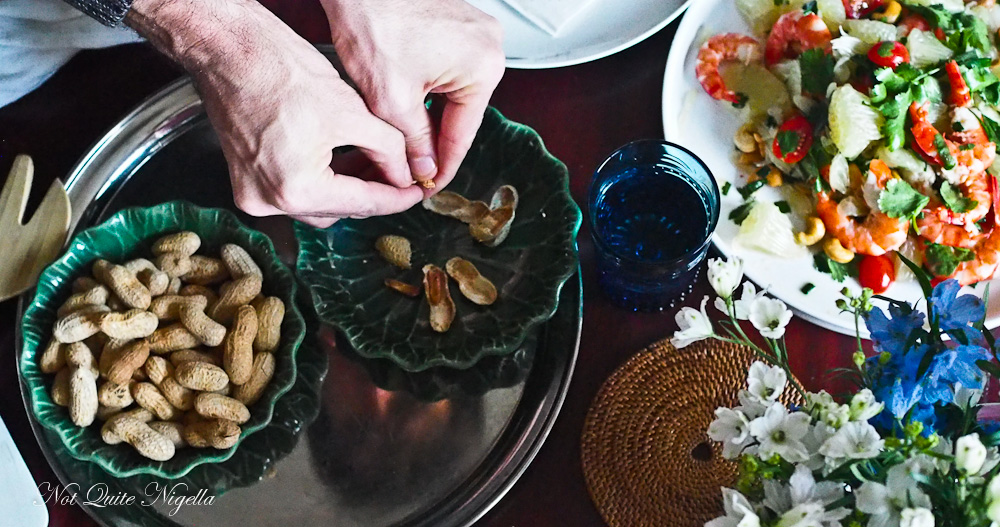 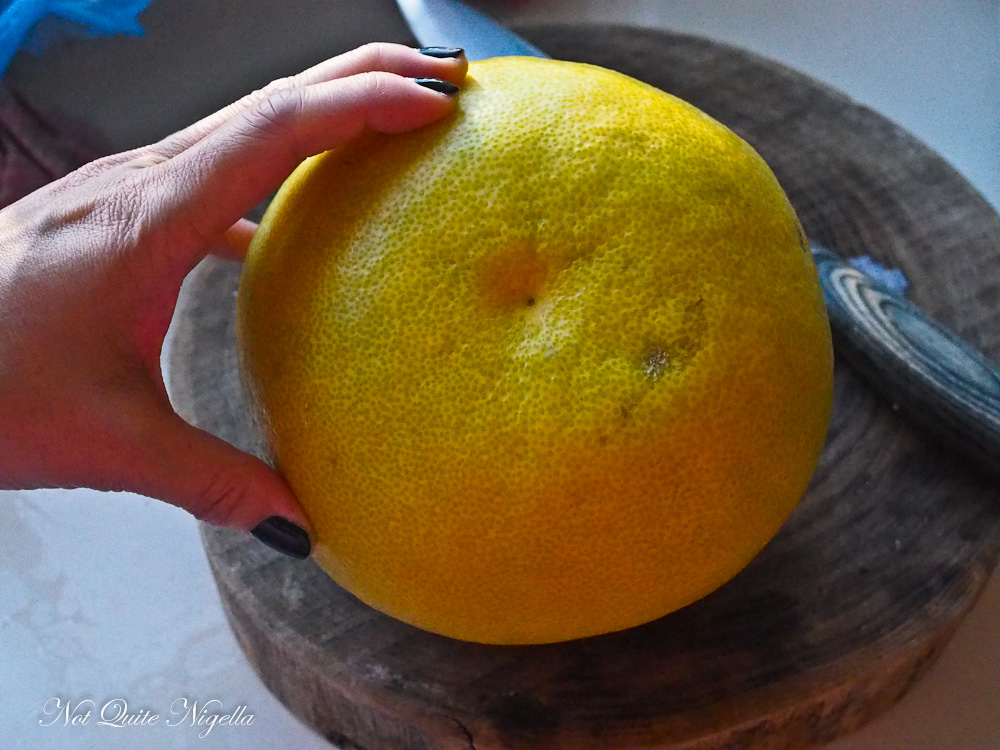 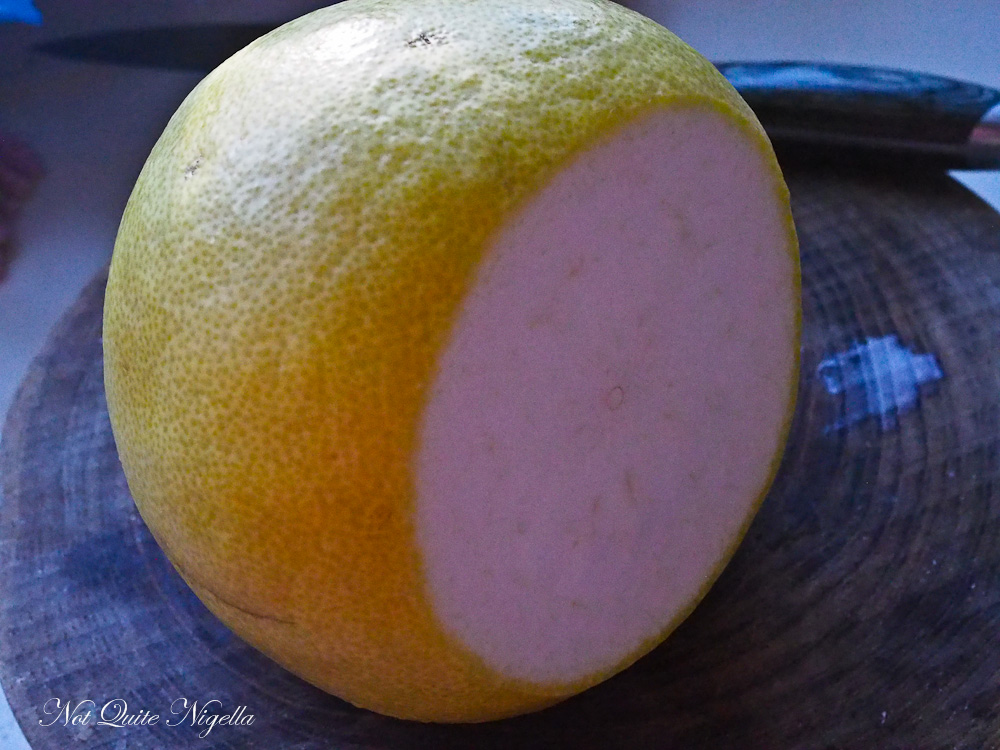 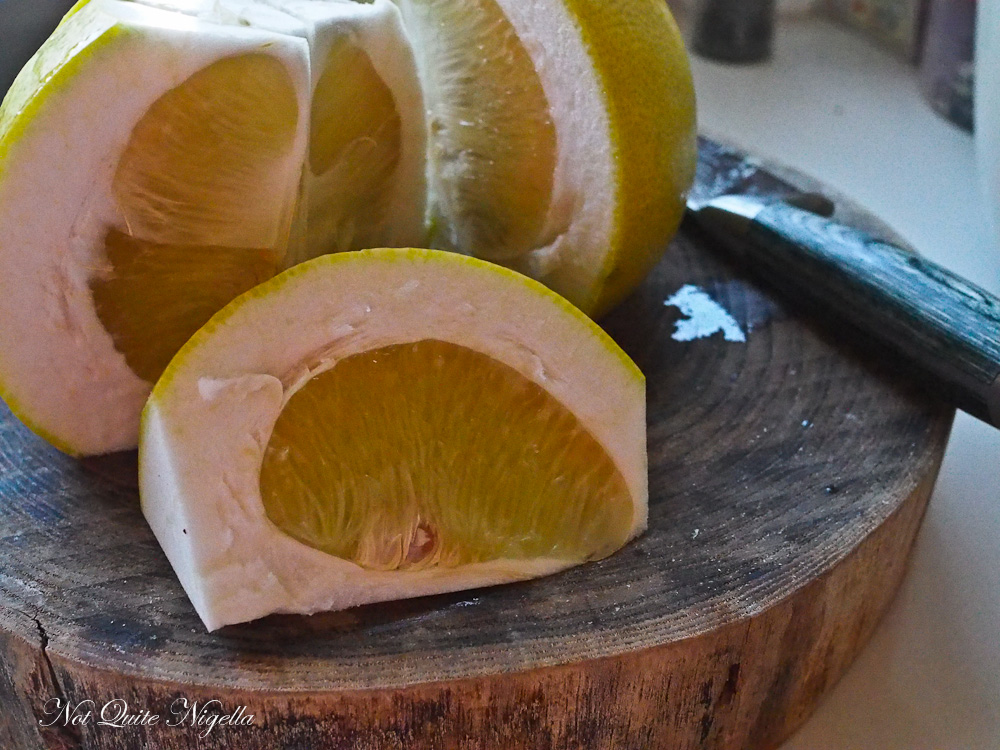 Step 1 - Mix the icing sugar and hot water together to dissolve. Add the fish sauce and lime juice and mix and set aside. Cut the bottom and top off the pomelo and cut the pomelo into eight piece cutting vertically. Remove the skin and white pith-this is thick and spongy. Remove the thick membrane from the segments and place the segments in a bowl. Break up into bite sized pieces. 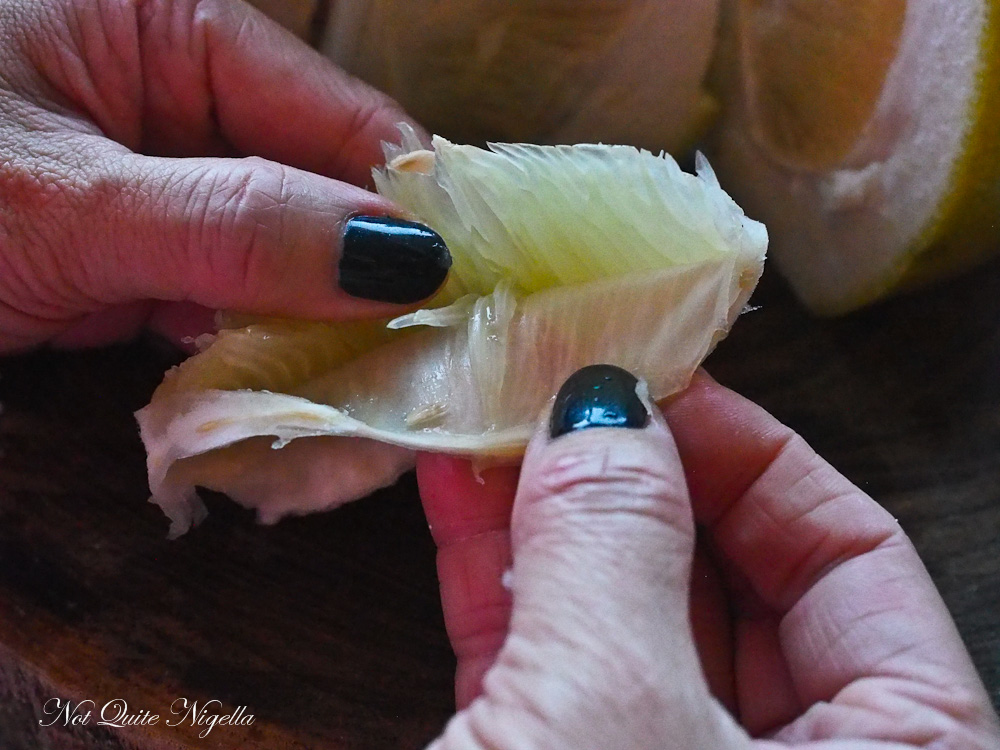 Step 2 - Peel the prawns and add to the bowl with the pomelo. Add the cherry tomatoes, green onion and coriander. Toss with the dressing. Add cashews and fried shallots just before serving.