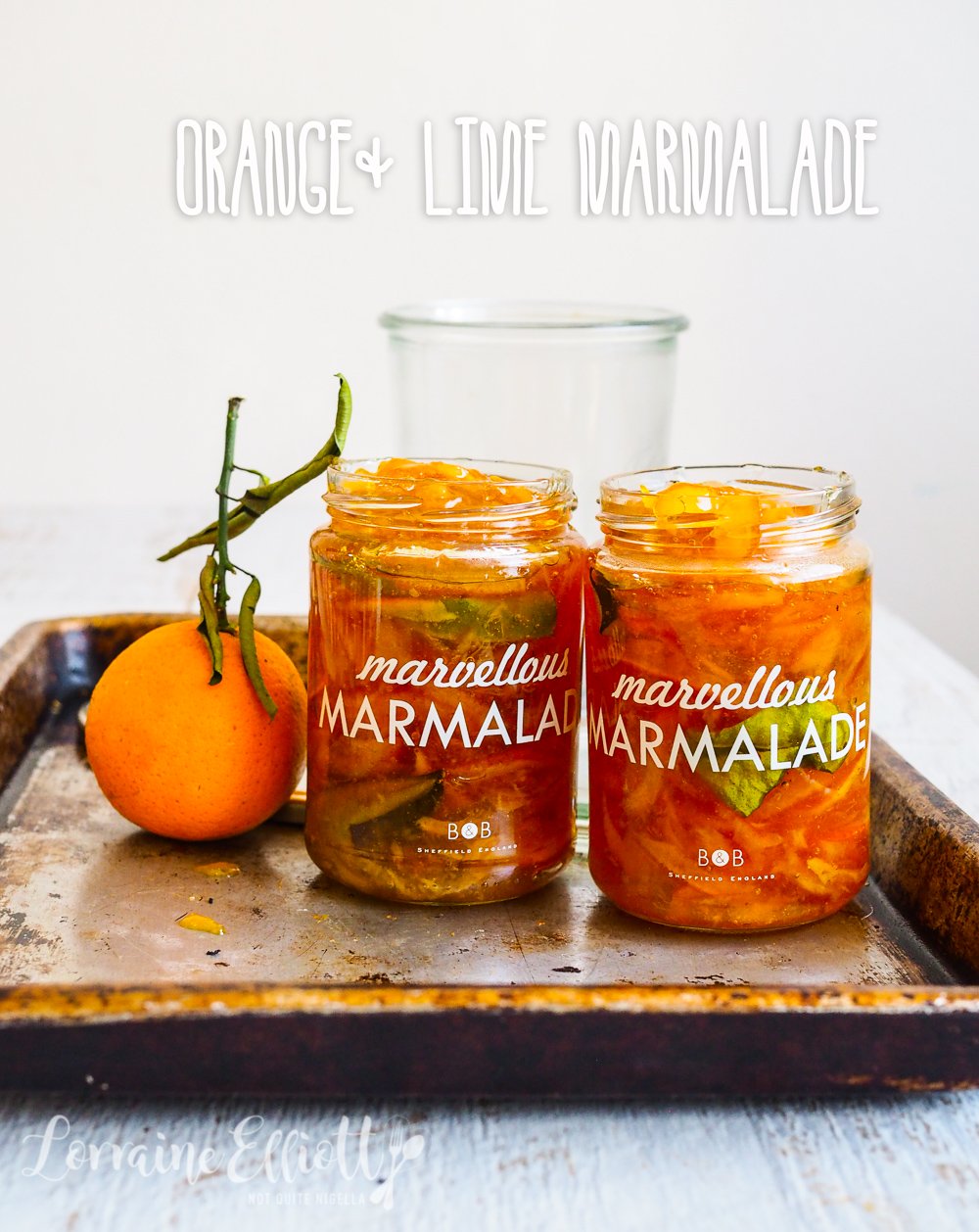 It's the season for Seville oranges and if you've got a supply of Seville or bitter oranges the absolute best way to use them is in a marmalade! I paired some unsprayed Seville oranges with kaffir lime leaves for an aromatic citrus burst of flavour. If you love marmalades, this is a pushy recipe Dear Reader!

While marmalade using regular oranges is nice enough, bitter oranges make the most marvellous marmalade. While this marmalade is sweet, there's a wonderful balance of sweet and bitter. In fact, this is possibly my favourite marmalade batch ever. The recipe is thanks to a friend of Queen Viv's called Julie from New Zealand who is known as an incredible cook. She doesn't give out recipes easily and Queen Viv was surprised to see that she had given me two after she and her husband come over for Christmas dinner one year.

The first recipe she gave me was for shortbread and it was an absolute winner. The second was for her grapefruit marmalade but in this case I used Seville oranges. If you can't get Sevilles, by all means substitute it with grapefruit rather than sweet oranges because then you'll get that lovely bitter counterpoint to the jammy sweetness.

I got the Seville oranges from a friend Louise who brought some back from in her in laws' farm. They were perfect to use in this as they weren't sprayed and they also had lots of pips (for natural pectin) and were bitter oranges so they were a bit too bitter to eat on their own. 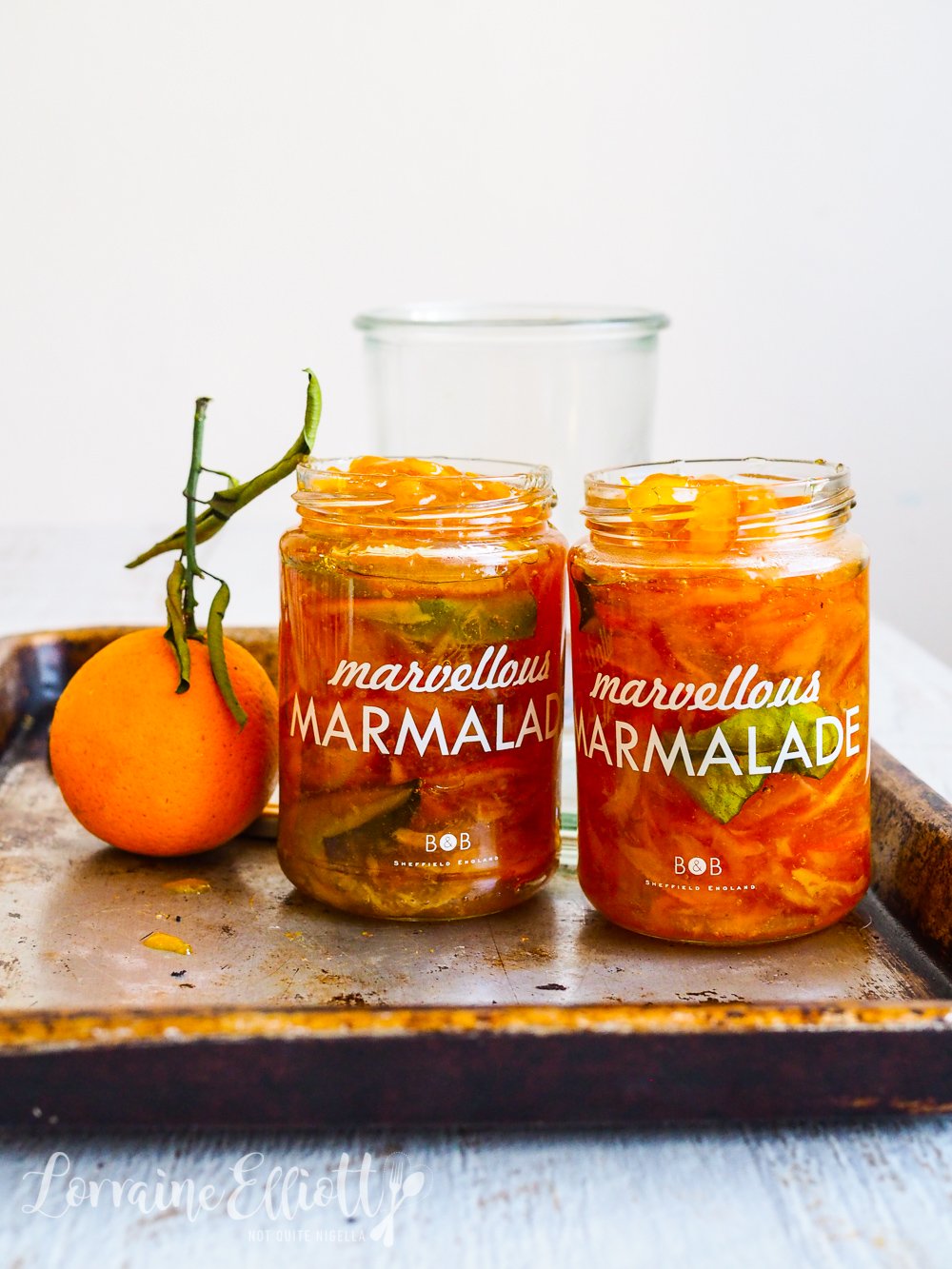 Julie's recipe was a bit different from how I've made marmalade in the past. It requires the fruit to be soaked in water overnight. I'm not sure what that did but I will say that this is just about the best marmalade recipe ever. It did exactly what it was supposed to be and set beautifully. I added the kaffir lime leaves just because my mother gave me some and also because the idea of leaving something basic fills me with fear.

I was talking to my friend Girl Next Door about basic things. As her name suggests, she is really the classic girl next door whereas I have never, ever been called the girl next door - unless you live next door to the Addams family! Mums love her and she is very approachable looking and friendly.

Girl Next Door loves basic things like vanilla ice cream and margarita pizza. And while I like them and appreciate that them for testing purposes (eg testing out a pizza place by ordering a margarita) I will always find myself gravitating towards something unusual. If there's a crazy combination or an ingredient that I've never tried before, I want to order it.

So tell me Dear Reader, do you like basics or do you prefer more unusual things? Are you the girl or boy next door? 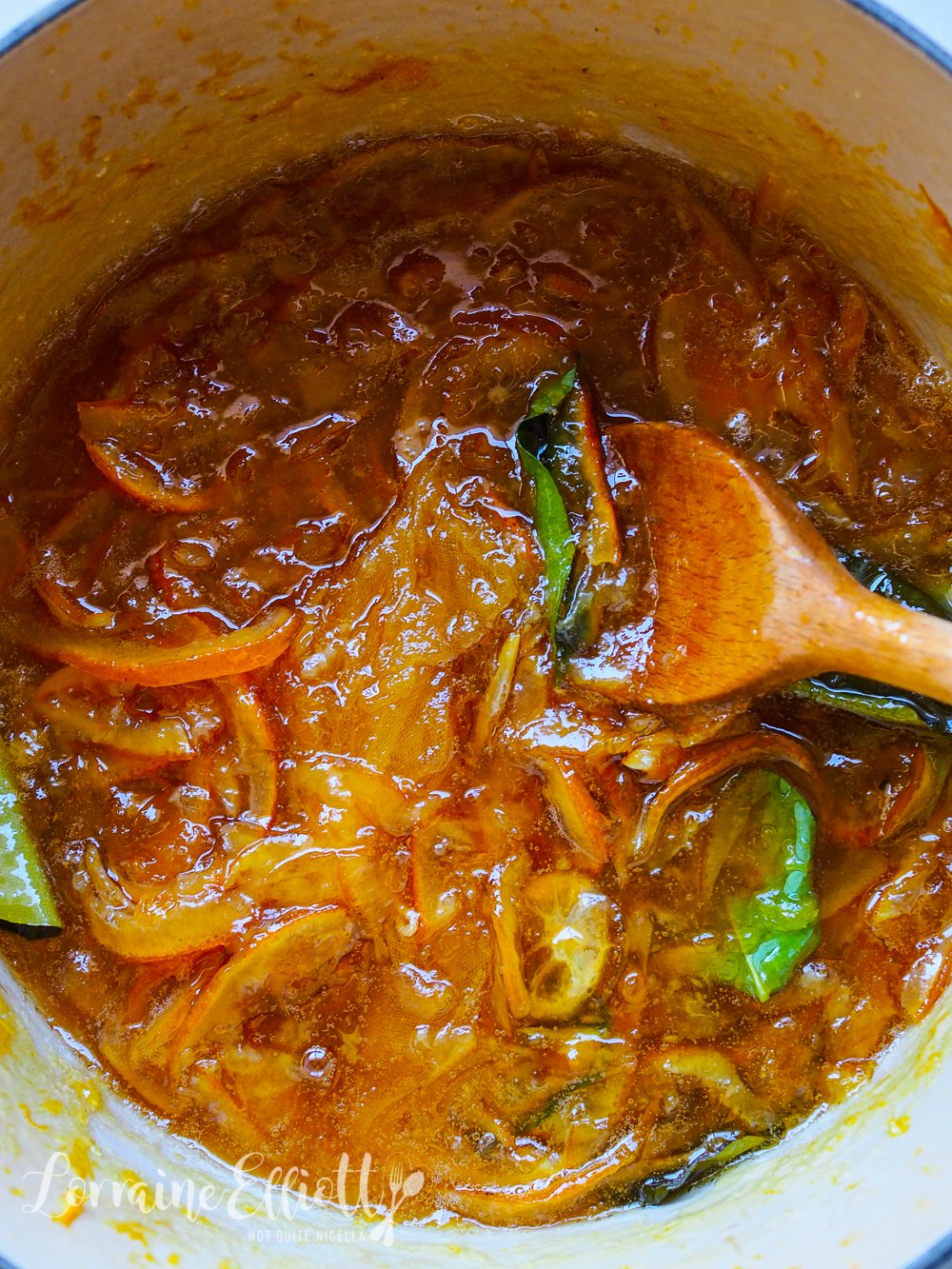 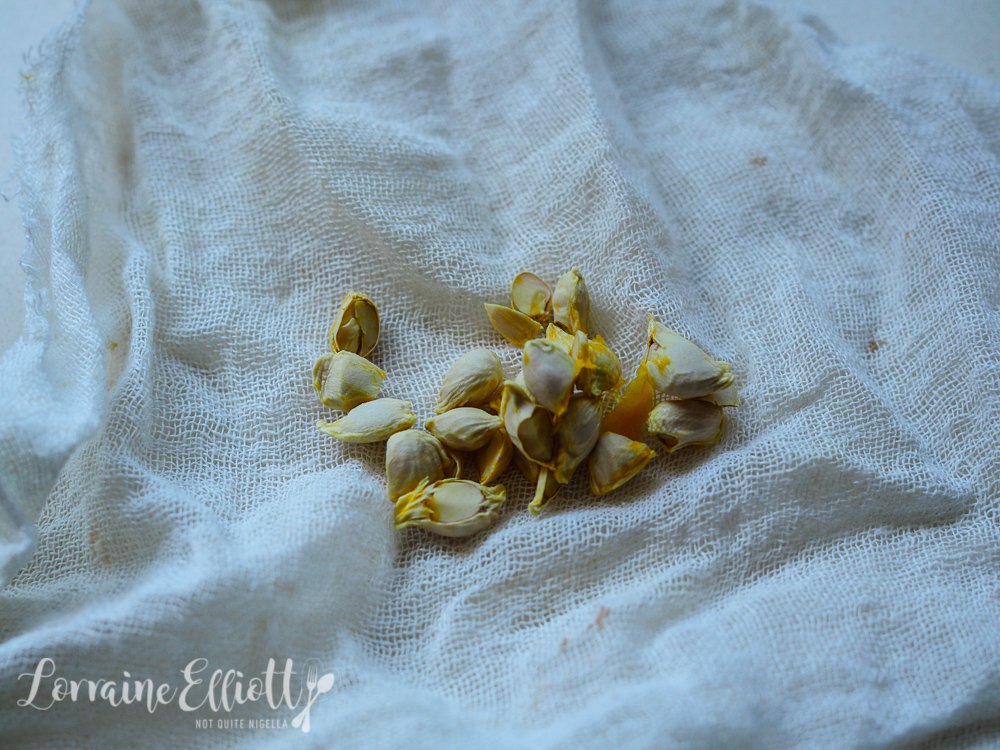 Wrapping the seeds up in a muslin pouch

Step 1 - Wash and dry the oranges and using a mandolin on setting #2, slice the oranges thinly reserving the pips (don't worry if the pips get chopped in half). Weigh the orange slices and juice and measure an equal weight of cold water and place the oranges and water in a bowl. Allow to stand in a bowl or a pot with a lid, covered until the next day (I left it on the kitchen bench as it was cold but if it's hot keep it in the fridge). Place the seeds in a muslin pouch and tie with some kitchen string and add this to the pot. 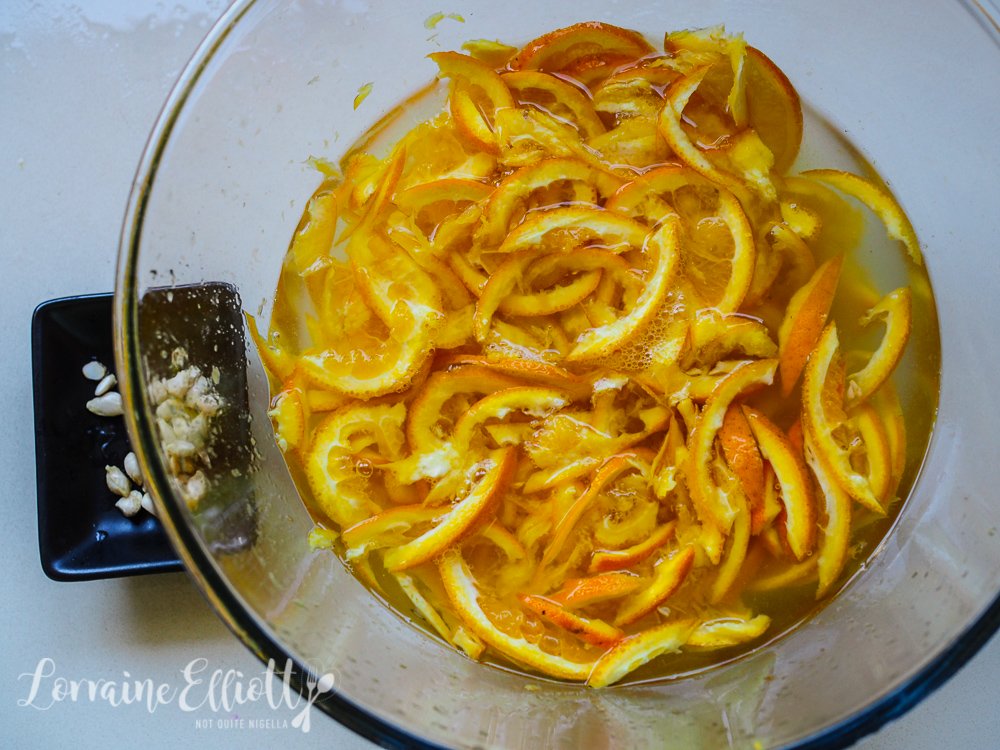 Step 2 - The next day bring everything to a boil and simmer with the lid on for 1 hour. Remove the seed pouch and weigh the orange mix (I let it cool a bit so it was easier to handle). Measure out the identical weight of sugar. 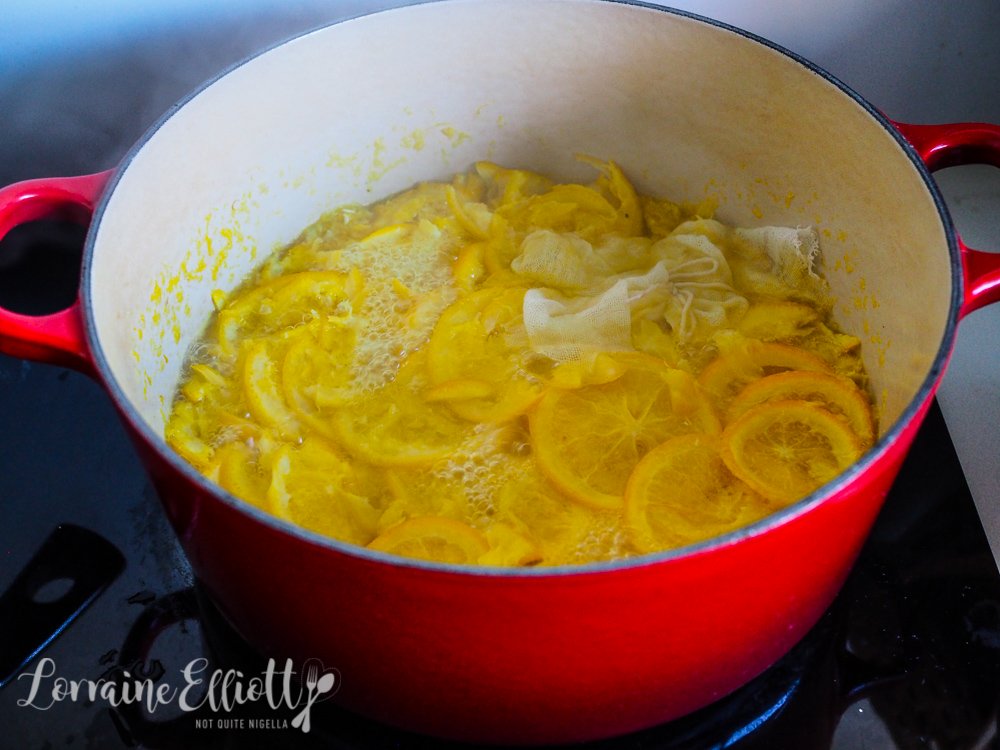 Step 3 - Add the sugar and kaffir lime leaves to the oranges and bring to a boil and simmer with the lid off. Place a saucer in the freezer to test the marmalade. It will take anything from 20 minutes to 40 minutes for the marmalade to set. To test the setting, spoon a little onto the cold plate and trace a line with the handle of a spoon. If it becomes jellied in texture and a line holds then it is ready. Place in hot, sterilised* jars (see how to sterilise jars below). Make sure that the jars are hot when you add the hot jam or the glass will crack. Wipe down the lip and sides of the jar, secure the lids tightly and then turn the jars upside down and cool completely. 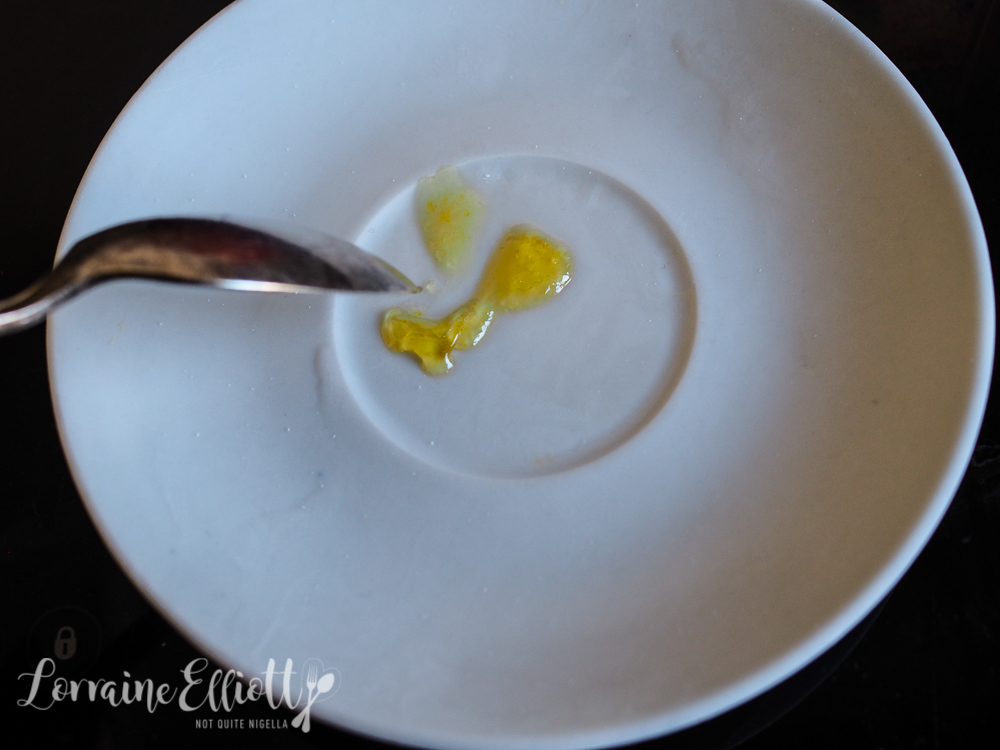 Testing to see if the marmalade is set

To sterilise jars, place clean jars in a 180C/350F for 10 minutes (make sure to remove any rubber or silicon seals). 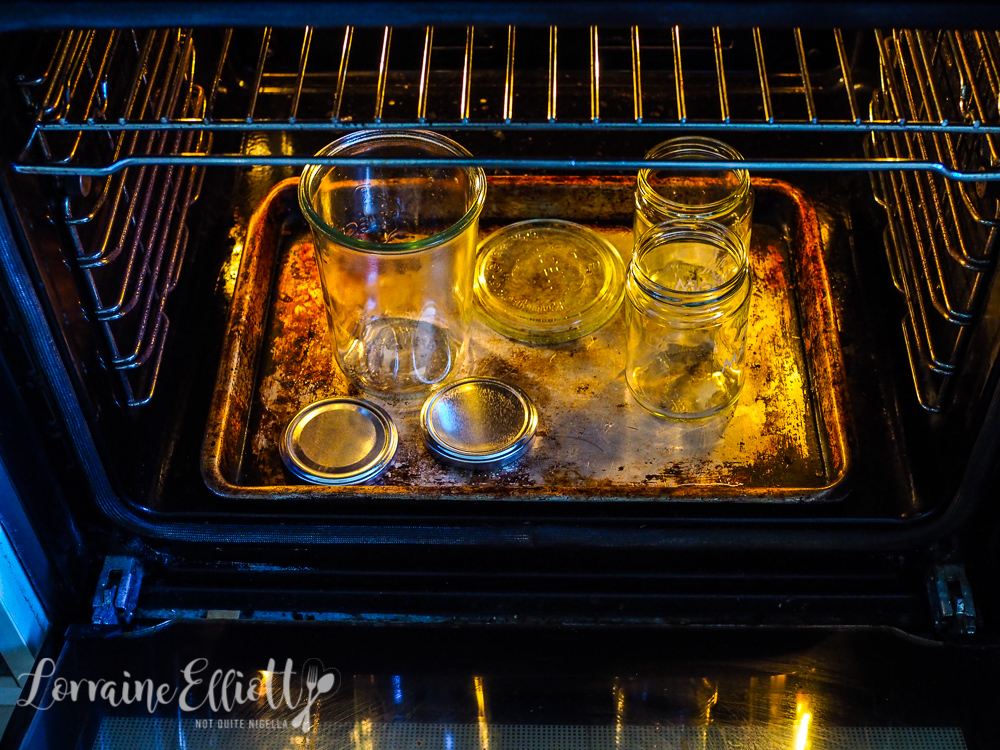 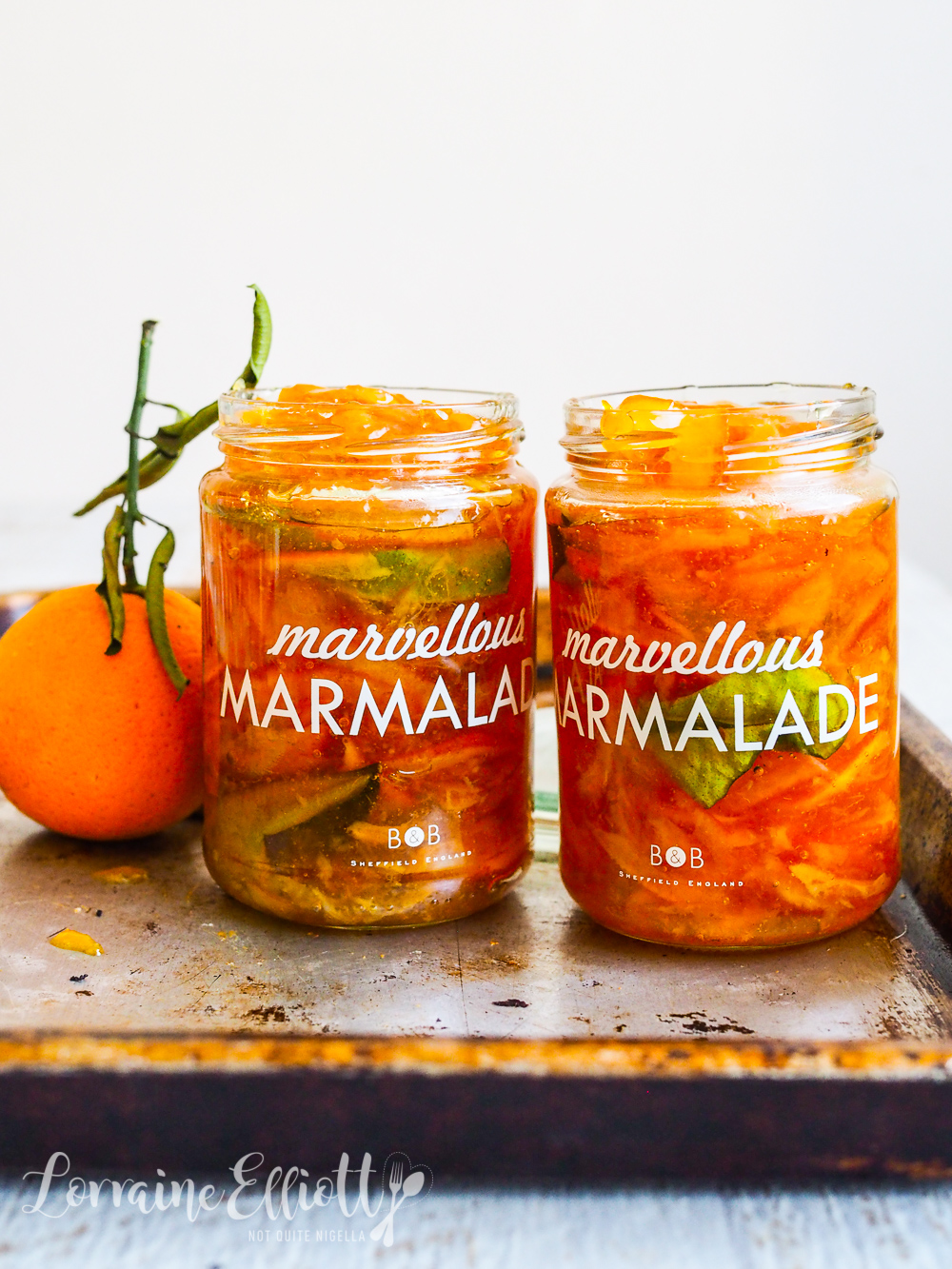