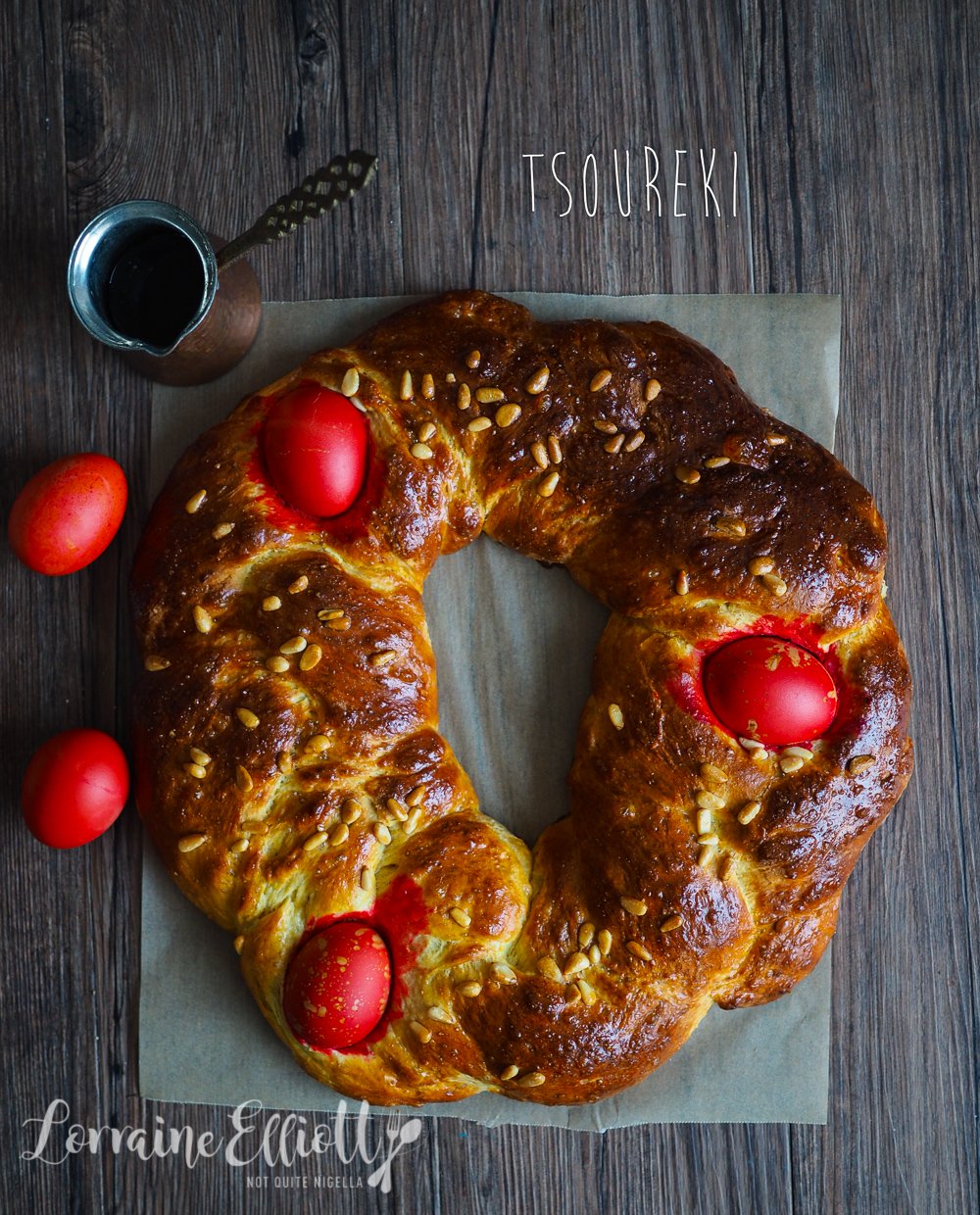 Tsoureki or Greek Easter bread is such a delicious treat! Fragranced with mahlepi, orange and cardamom it has a light, buttery texture and using this method you'll have a tsoureki that will stay fresh for days! 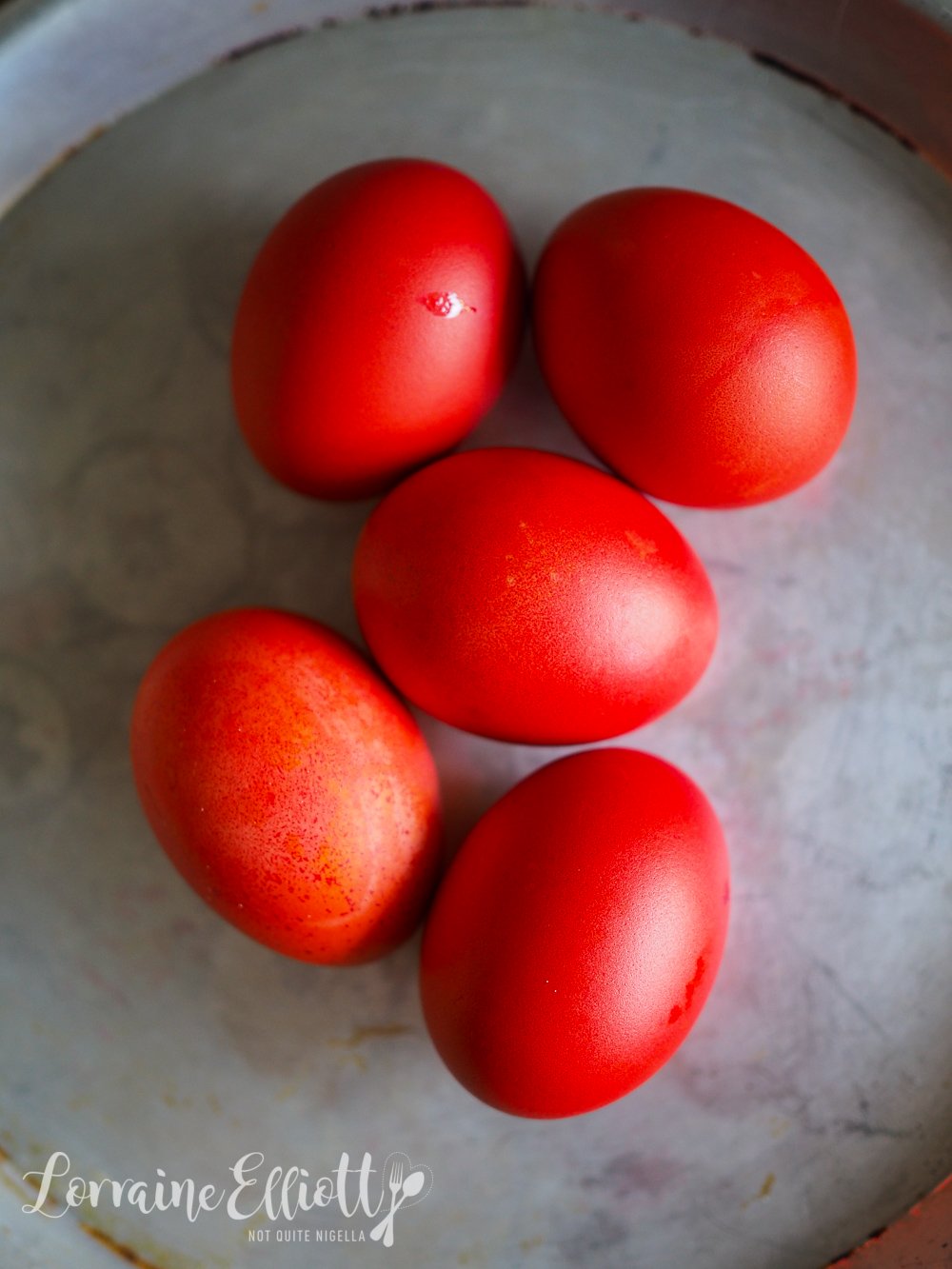 In Greek culture tsoureki is said to represent the resurrection of Jesus and the red eggs are his blood. The red eggs for Tsoureki are usually made on Red Thursday before Good Friday. The name Tsoureki is based on the Turkish word çörek that means a bread made with a yeasted dough. The three braids that form the shape represent the holy trinity. Tsoureki is eaten on Easter Sunday but by the time that day rolls around tsoureki isn't at its best. But using a simple tangzhong roux, it stays wonderfully fresh. You know me and tangzhong right? Obsessed! 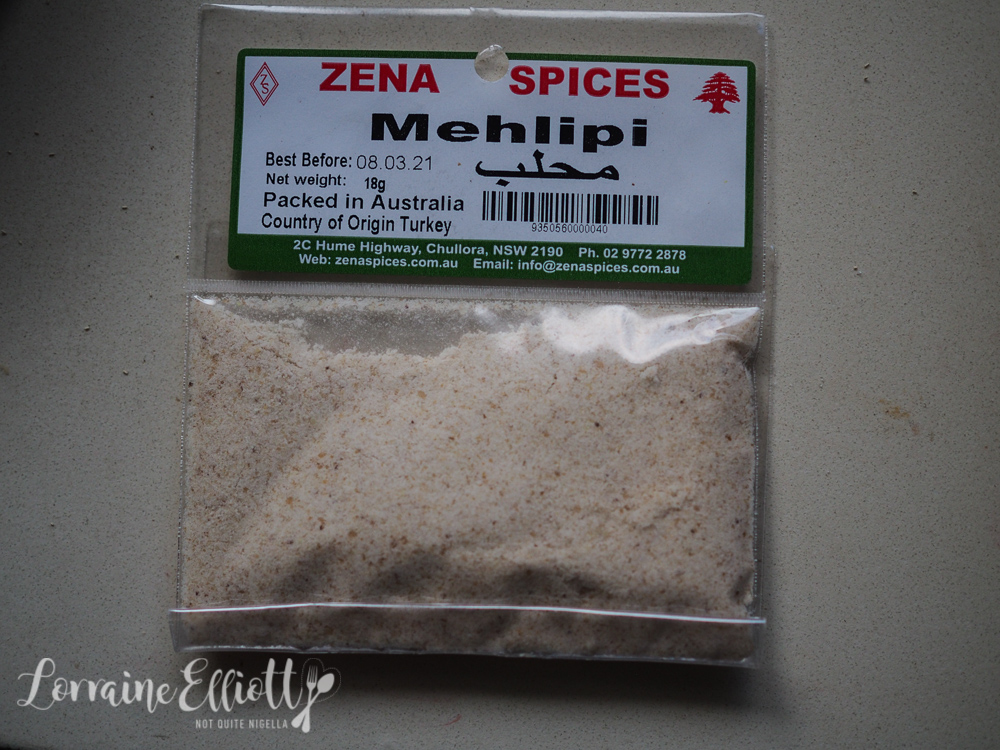 The reason why I wanted to make this is because a few weeks before I visited Harris Park and I bought a packet of mahlepi because I didn't know what it was. The store keeper's English wasn't able to explain it and my Greek consists of just food words so I asked on Instagram and many people told me mahlepi is the ground pit of a cherry. It has an almondy marzipan aroma to it and is one of the distinct flavours in tsoureki. But don't worry if you can't access this-you can use other spices.

I ended up baking the tsoureki a couple of days before the Easter long weekend. Mr NQN is very handy with building websites but he is not handy at all with home repairs and while I do small home repairs these were bigger jobs. There are some things that really annoy me and have done so for years. They are things like kitchen drawers constantly sliding open, drooping shelves and locks that need tightening. And I don't want to save the upgrades for when we move when we could have been enjoying them all along. 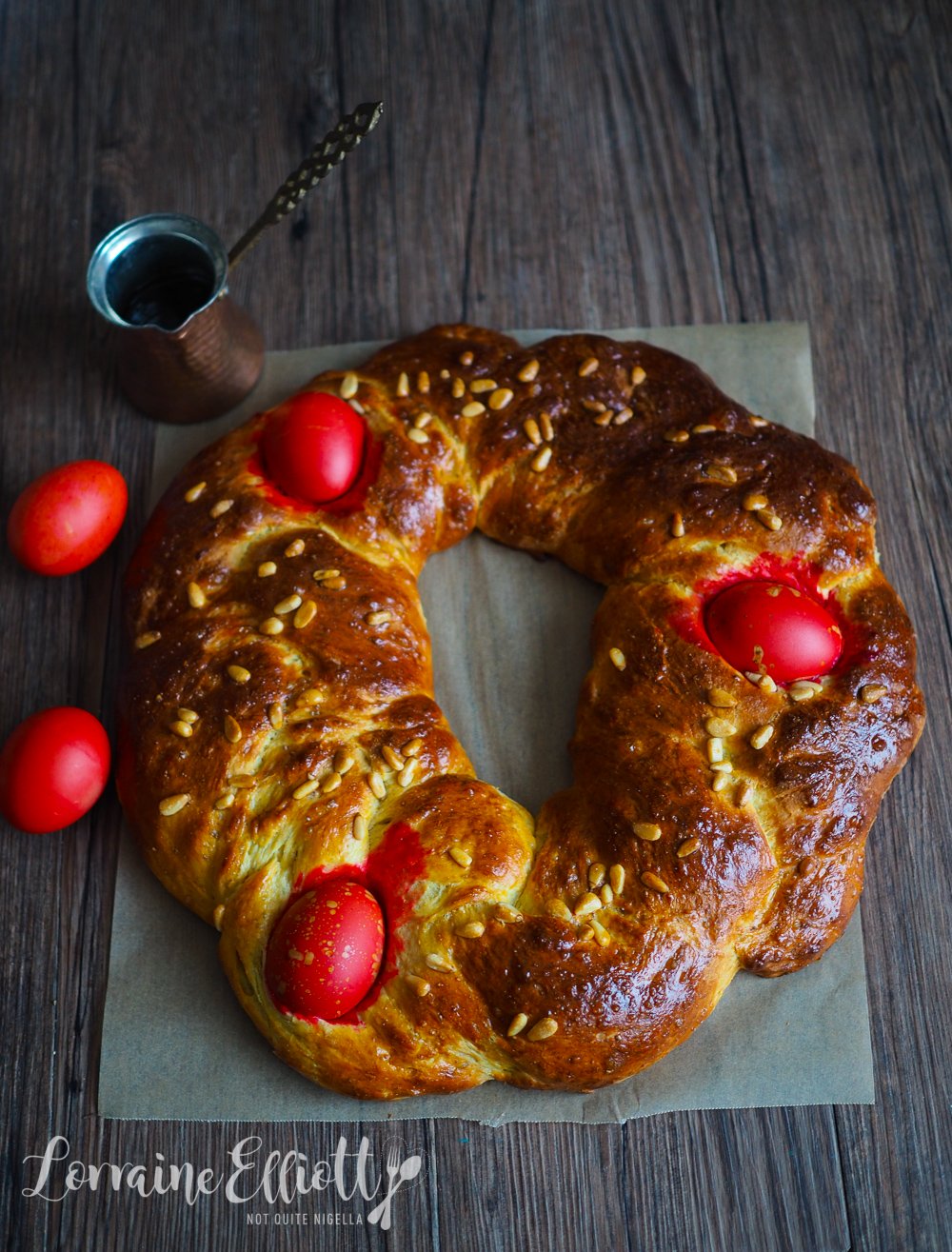 So I called in a handyman. He was very keen at first but once he came in to make a quote I had to do a bit of chasing up (typical man haha!). He finally came around after a lot of texts and by now I was thoroughly over it. He had a bit of a martyr complex and always had excuses why he couldn't come (SO many excuses about people doing him wrong) and made it seem like he was doing me a favour.

The most annoying thing was that while he was here he sighed and tsked a lot. I know, I sound like a lunatic about sighs but I find really loud sighs and tsks very passive aggressive and it drove me absolutely bonkers. I couldn't wait for him to leave for that and also because I had to slide the tsoureki in the oven. "I'll be 5 minutes," he said and 20 minutes later my tsoureki was super puffy - puffier than I wanted.

"Oh you're making tsoureki?" he asked. He was Greek and recognised it straight away. "Are you Greek?" he said squinting at me. I definitely don't look Greek so I just explained about the mahpeli spurring on my first tsoureki. 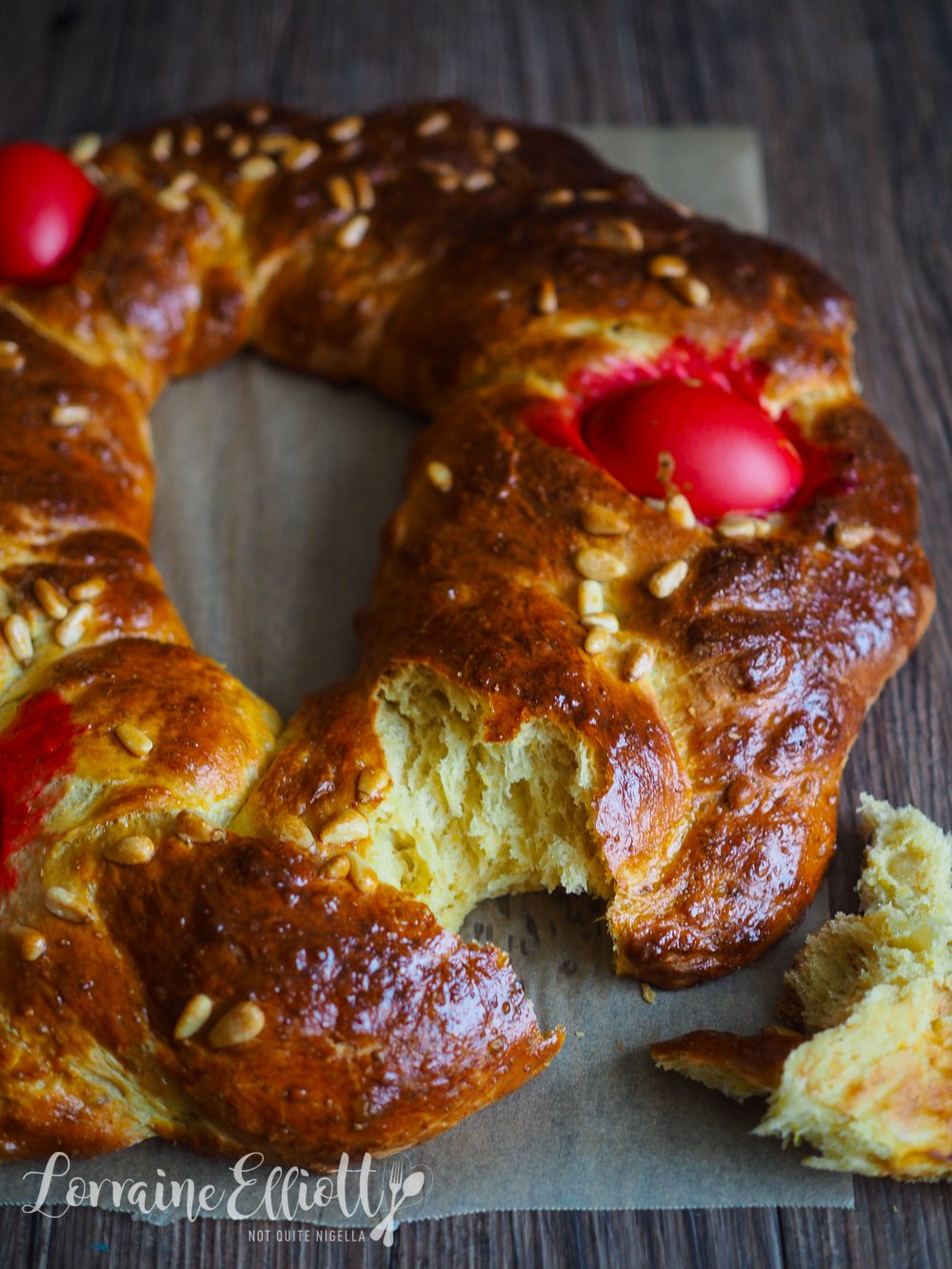 So my tsoureki is a little puffier than I wanted and the knots are a little less robust because I had to wait a bit longer to use my kitchen. But honestly once I tried it I was in heaven. It's brioche-like with a generous amount of butter and eggs and the tangzhong makes it last. Serve this with some soft salted butter and it is heavenly! I doubt this will last until Easter Sunday!

So tell me Dear Reader, do you find loud sighs and tsks passive aggressive? Are you very handy around the house? Have you ever tried tsoureki?

Mahlepi can be found at Greek delis. If you can't find it, you can use ground cardamom which has a different flavour but is very tasty and aromatic.

Step 1 - Take out 1/6 cup of the total flour and whisk with 1/2 cup of water in a small saucepan until smooth. Heat on medium heat until you get a roux and it reaches 65C/149F. Remove from heat and whisk in eggs and honey and bring the temperature down to 45C/113F. 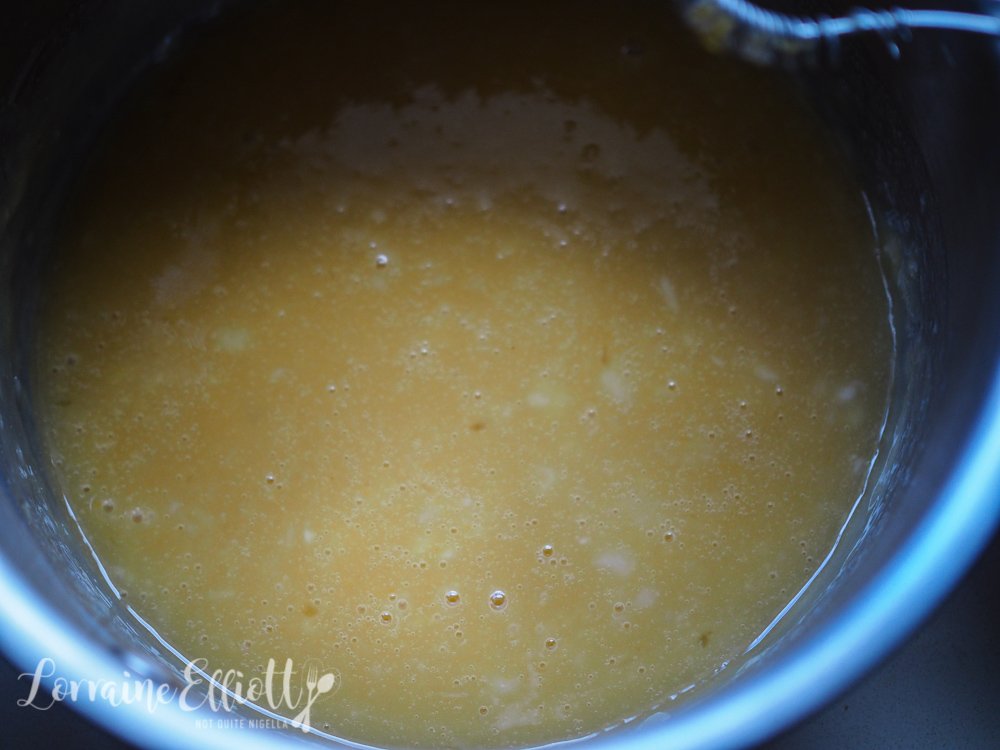 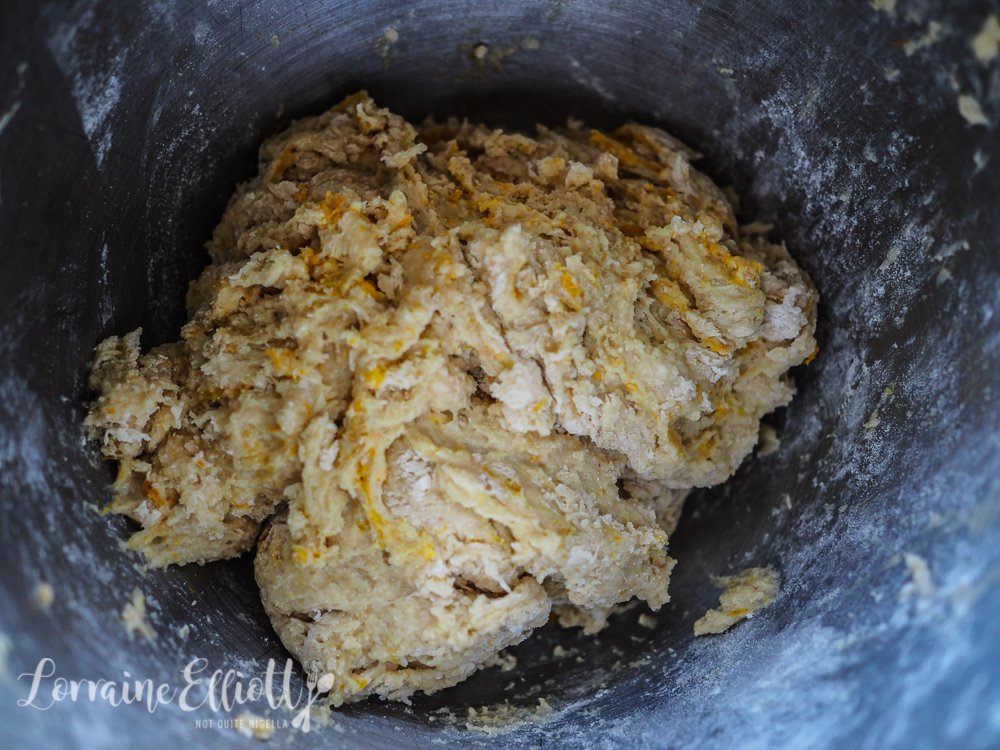 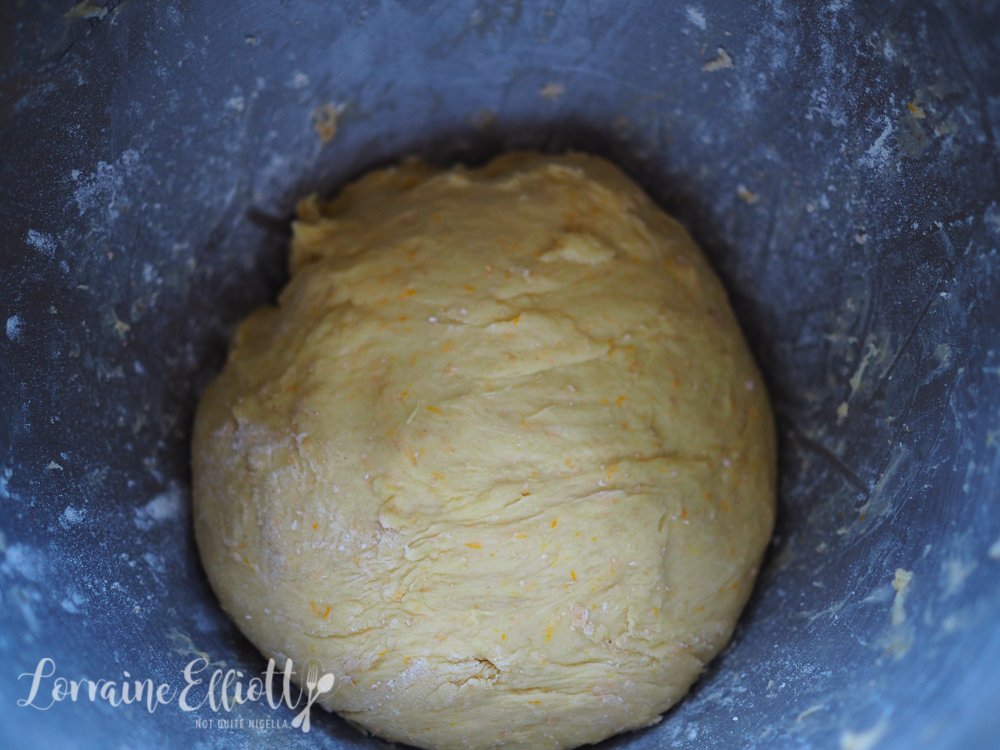 Before the first rise

Step 3 - Add the cubed butter and knead until it becomes very elastic and you can see the window pane effect (where you pull apart the dough and it doesn't break). Roll into a ball and place in a large bowl (I just use the same bowl) and cover and keep in a warm place to rise to 2-3 times its original size (around an hour). Knead the salt into the dough. 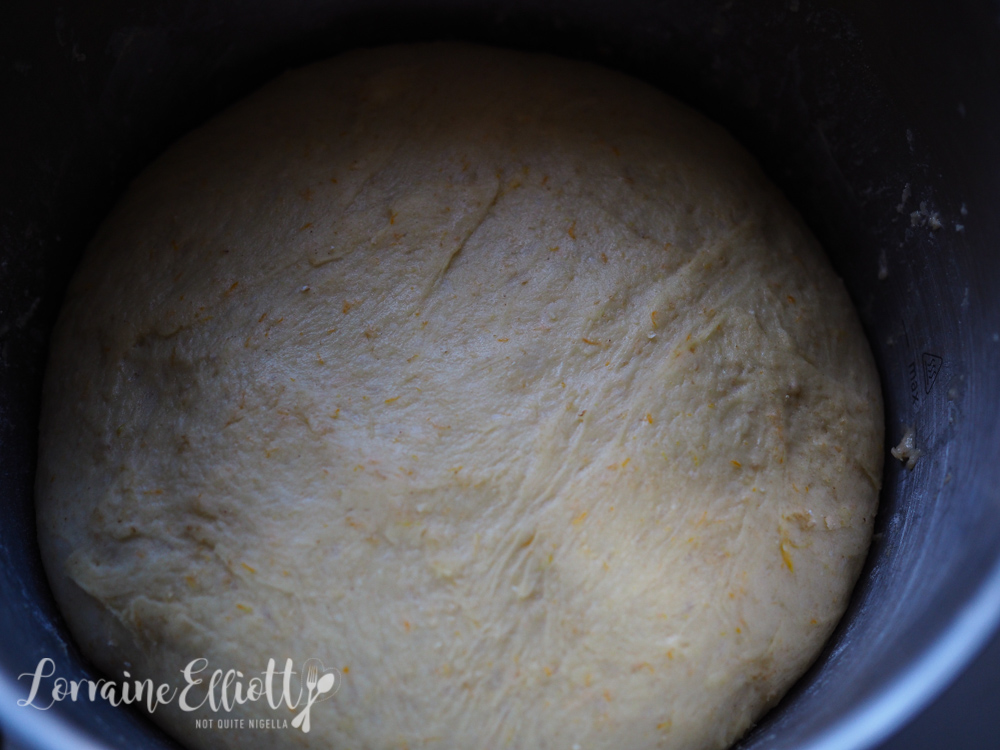 Step 4 - While the dough is doing its first proof make the eggs. In a bowl mix the red food dye with the vinegar and then spoon the red dye onto the eggs until a bright red colour is reached. The vinegar helps the red dye set into the eggshell. 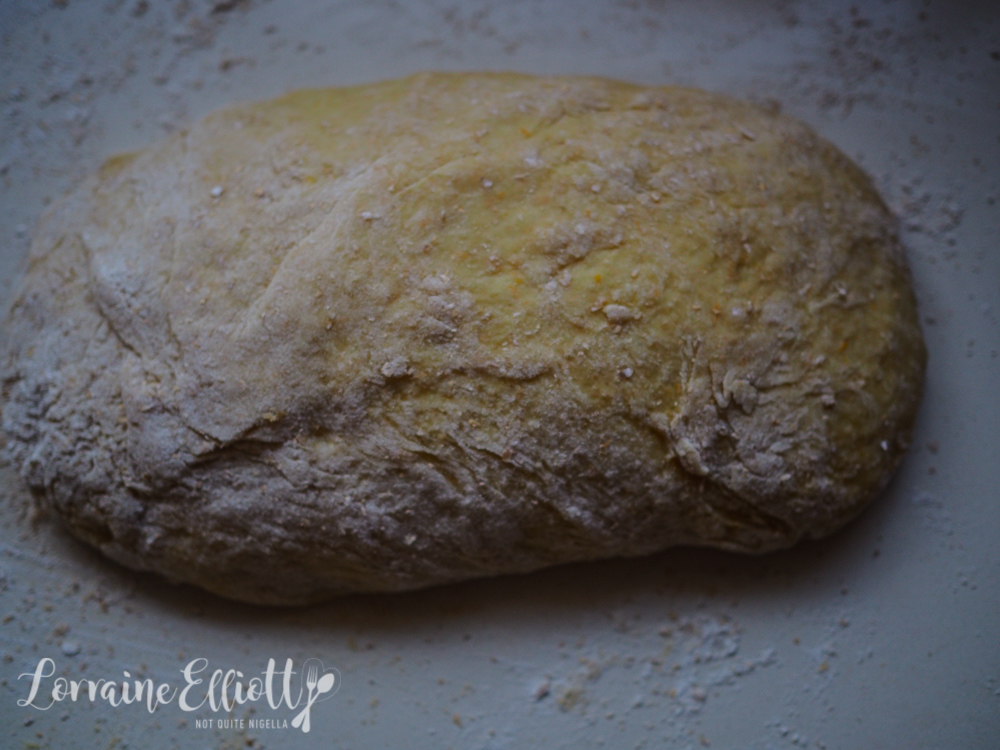 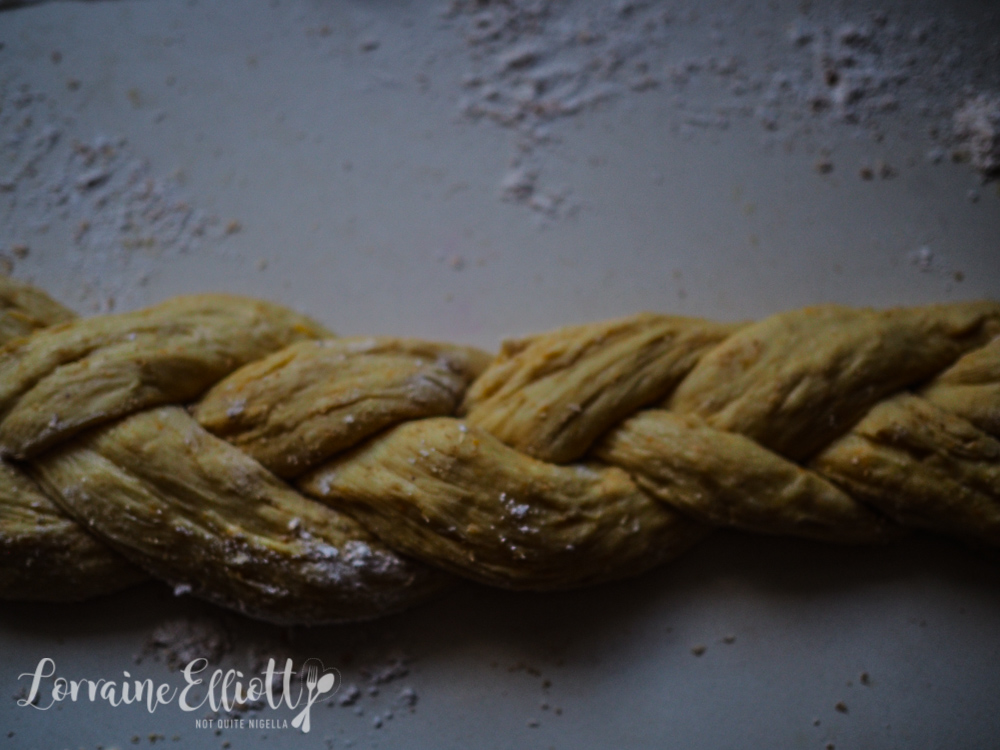 Step 5 - Preheat oven to 180C/350F. Flour a large sheet of parchment and divide the dough into three equal portions. Roll out into a log shape around 60cms/2 feet long. Attach them together at one end and then plait the three logs together. 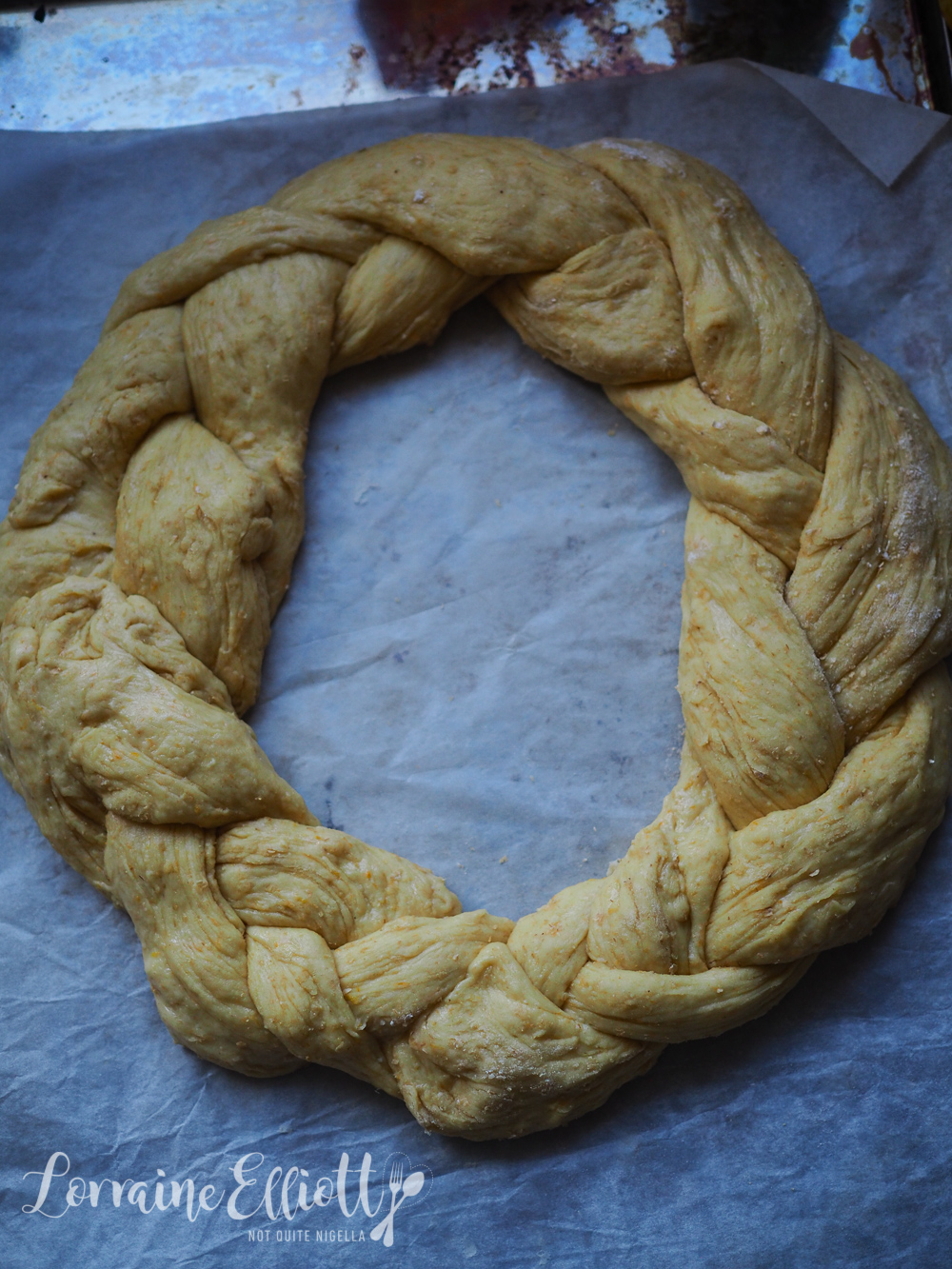 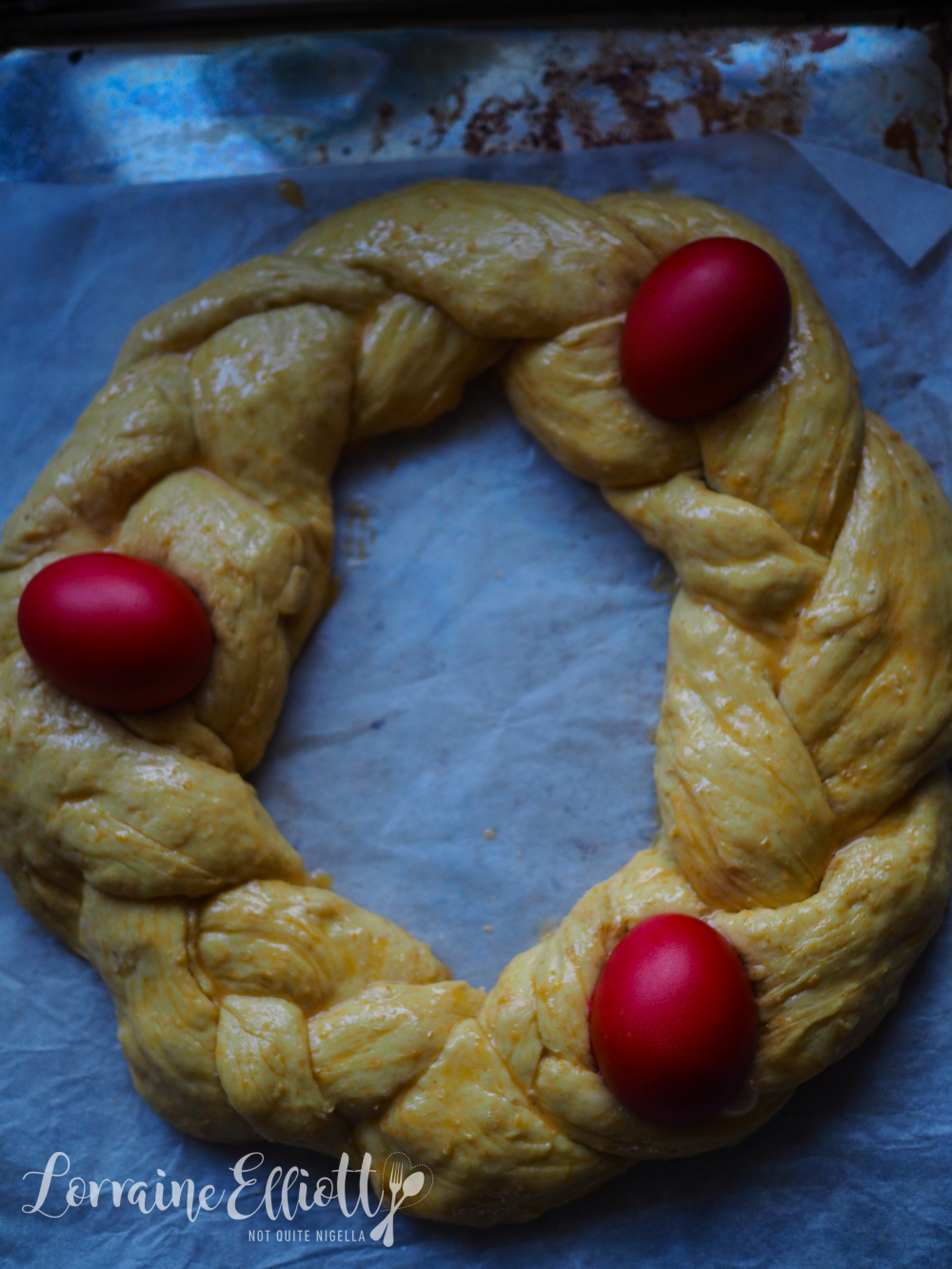 Step 6 - Shape into a plaited round. Brush with egg wash and sprinkle with the nuts and nestle three eggs into the dough and allow it to rise again (around 15 minutes). Bake in the oven for 25 minutes. 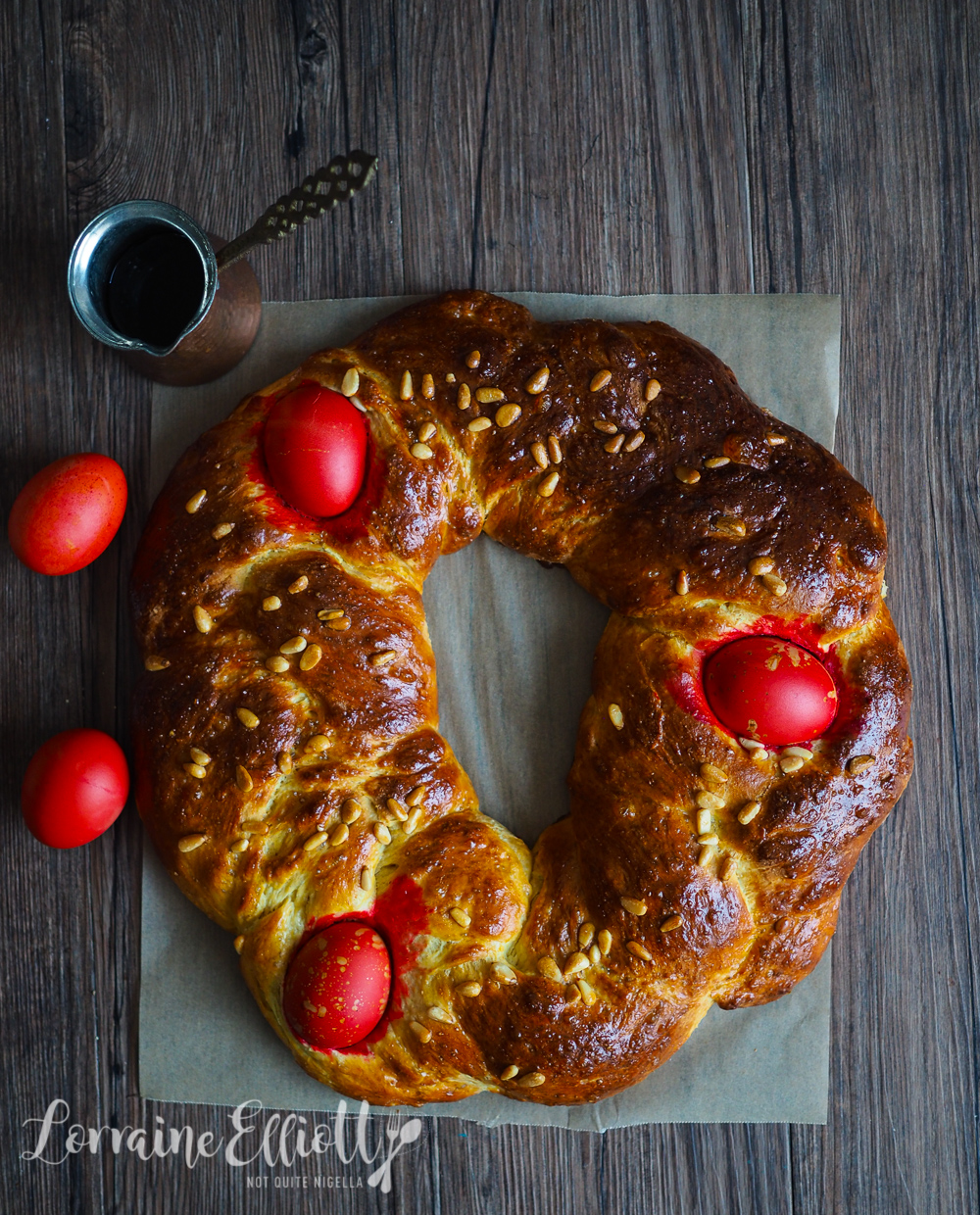