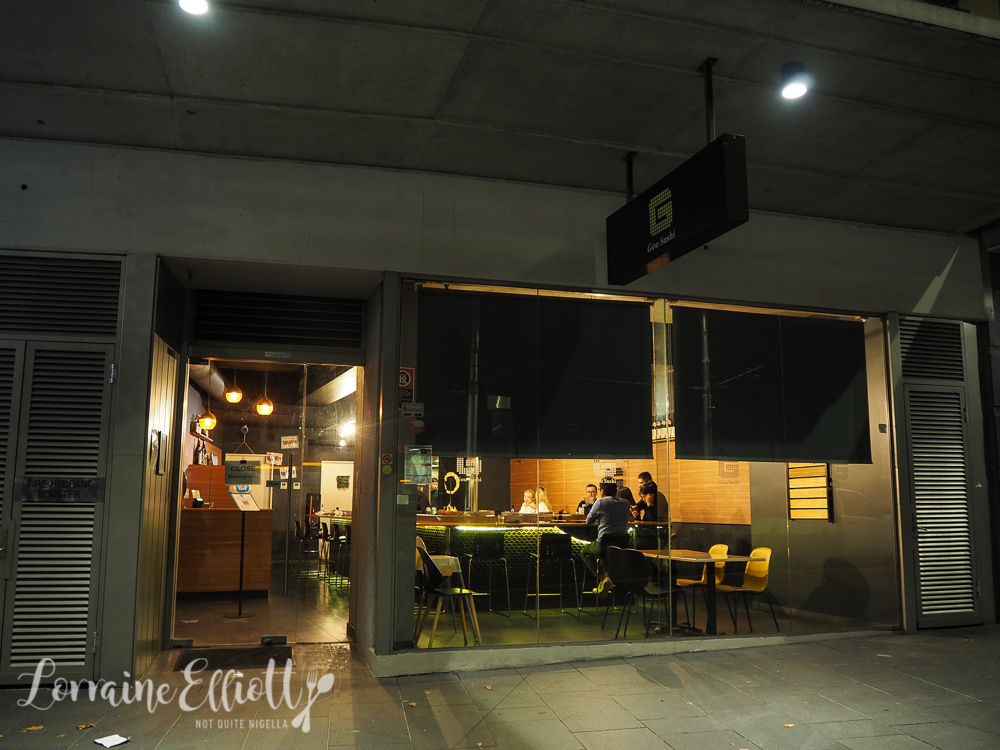 Sydney is omakase mad with many restaurants offering omakase menus, some specialising in tempura or sushi. By day Gou Sushi in Surry Hills is a regular sushi restaurant but on Friday and Saturday nights they have a sushi omakase and it's one of the best priced omakases available.

Omakase is a style of Japanese cuisine similar to a Western degustation with a pre-determined set menu that changes according to seasonal availability. Like a degustation, it is usually a multi course menu, often up to 20 courses and features high quality ingredients. Omakase restaurants usually seat only a small amount of people and there is a chef in front of you preparing the food. 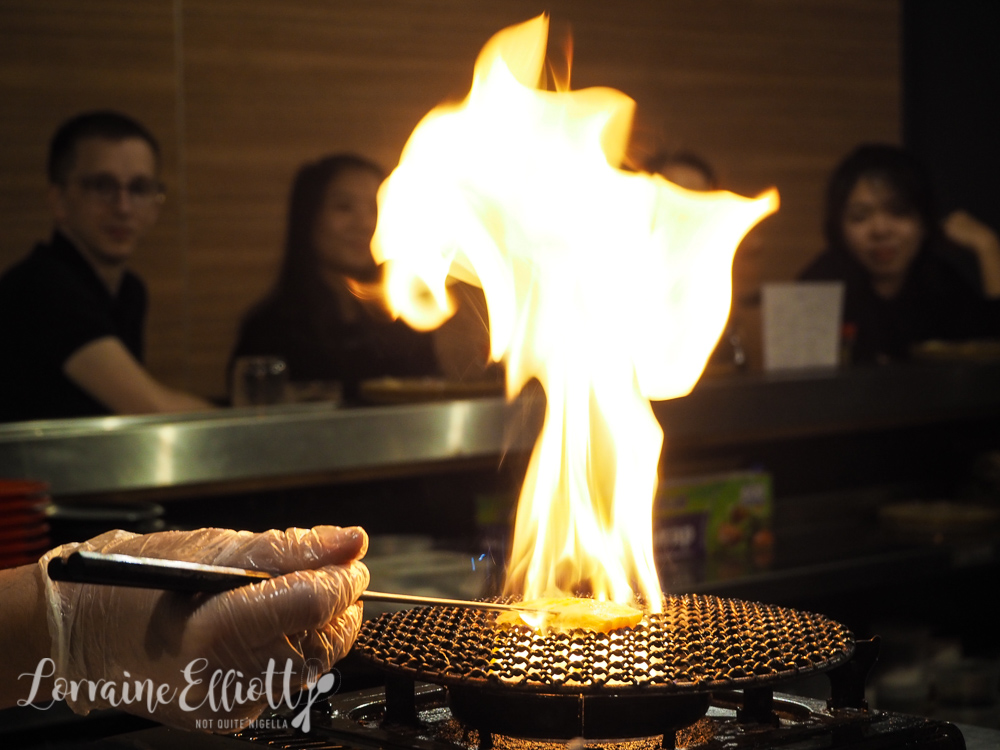 While the setting at Gou Sushi doesn't really look like anything particularly special, the sushi omakase here is good and also great value at $85 for 20 courses. It's also a great starter omakase place to see whether you like this style of eating as omakase is usually around $200 a person. 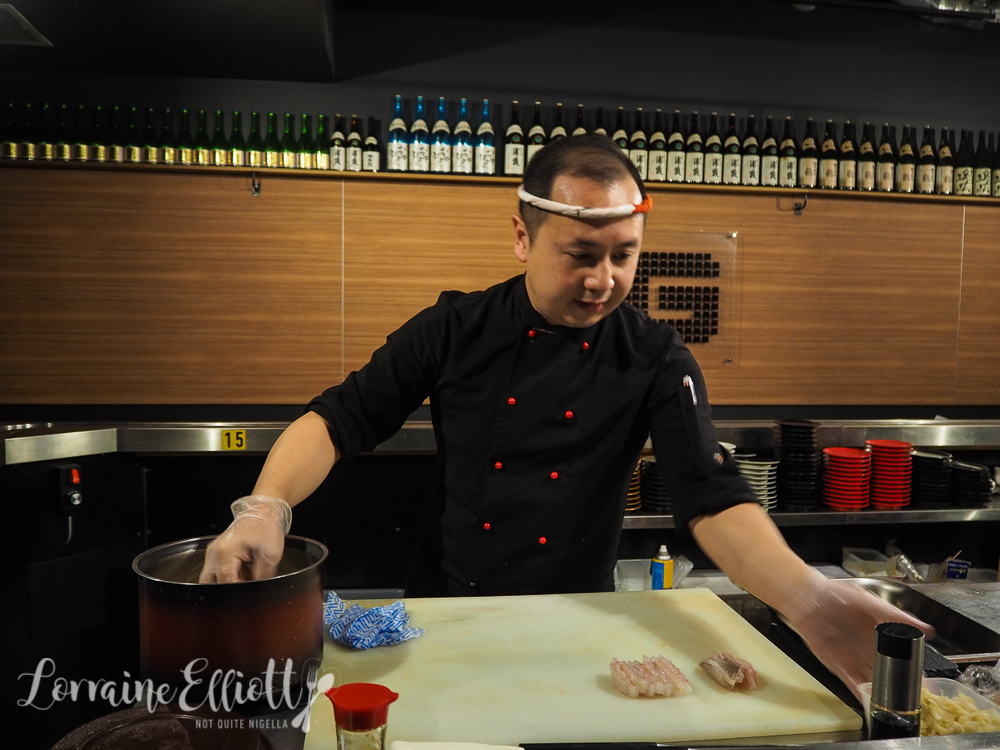 Sushi chef Rio Lau is from Hong Kong and has worked as a sushi chef since 2006 at restaurants like Masuya, Makoto city, Makoto chatswood, Umi and Yukiguni, the latter of which he owned and sold 2 years ago. He explains that Gou Sushi did away with sushi train service after reopening after COVID-19 in 2020. Customers started asking for omakase and soon after with no publicity, word spread and now on Friday and Saturday nights they offer omakase only. At other times it reverts to your sort of typical Japanese eatery with sushi, sashimi, udon and tempura. Diners are well spaced out and the hand written signs from the weekday menu are still on the walls. 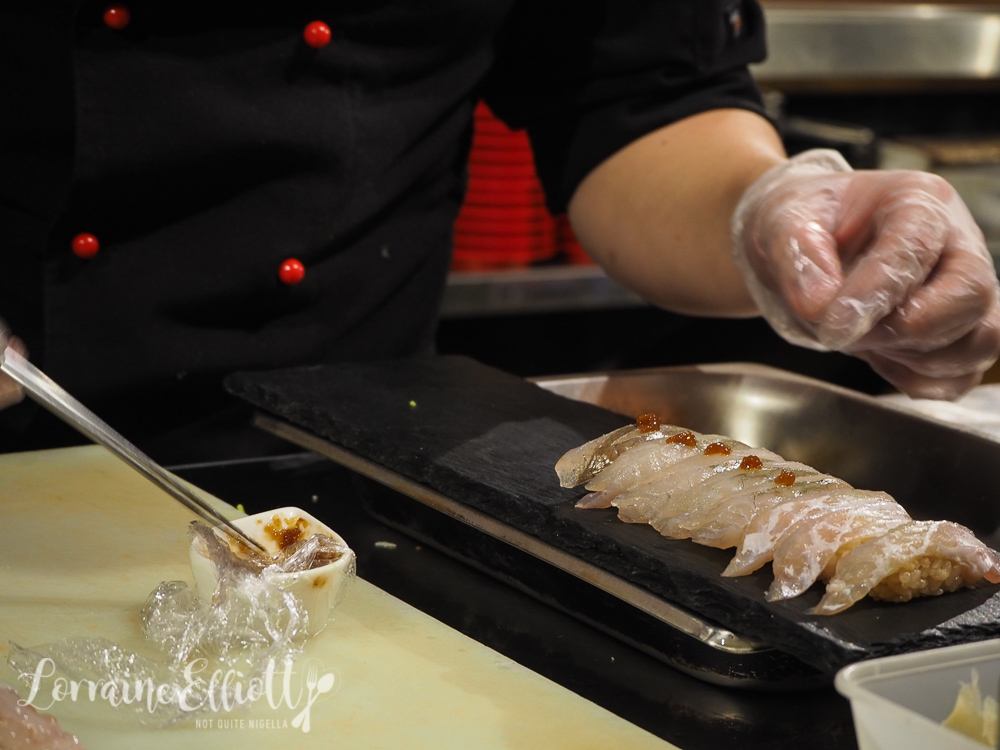 Chef Rio swiftly shapes and creates the sushi courses. He's very friendly and chatty with everyone that he serves and seems genuinely interested in feedback. 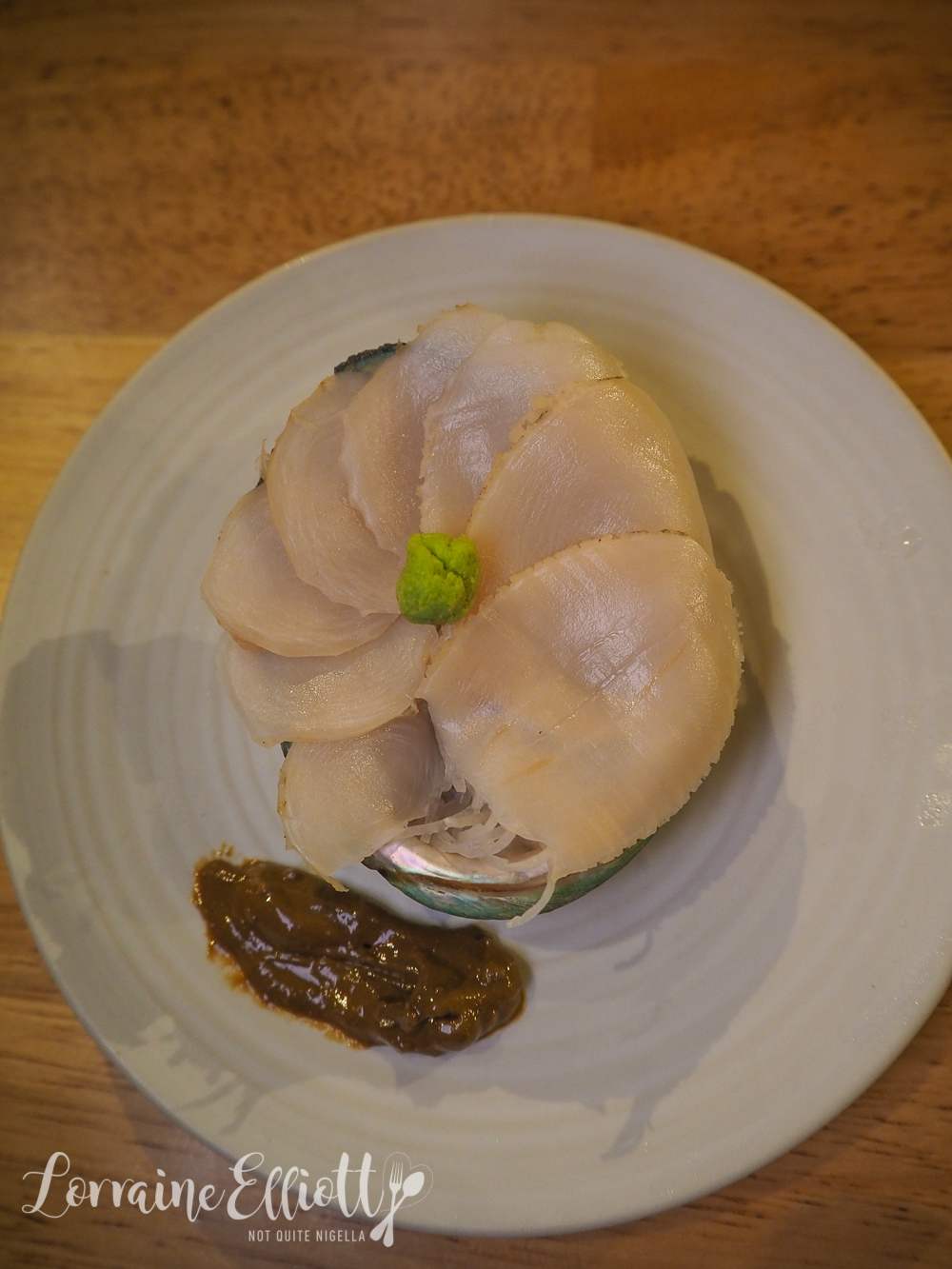 The first course is baby abalone sashimi with abalone liver sauce. The thinly sliced abalone is served fanned out on an abalone shell. It is tender with a good bitey texture. I do like it dipped in the soy sauce and then swept in the liver sauce. 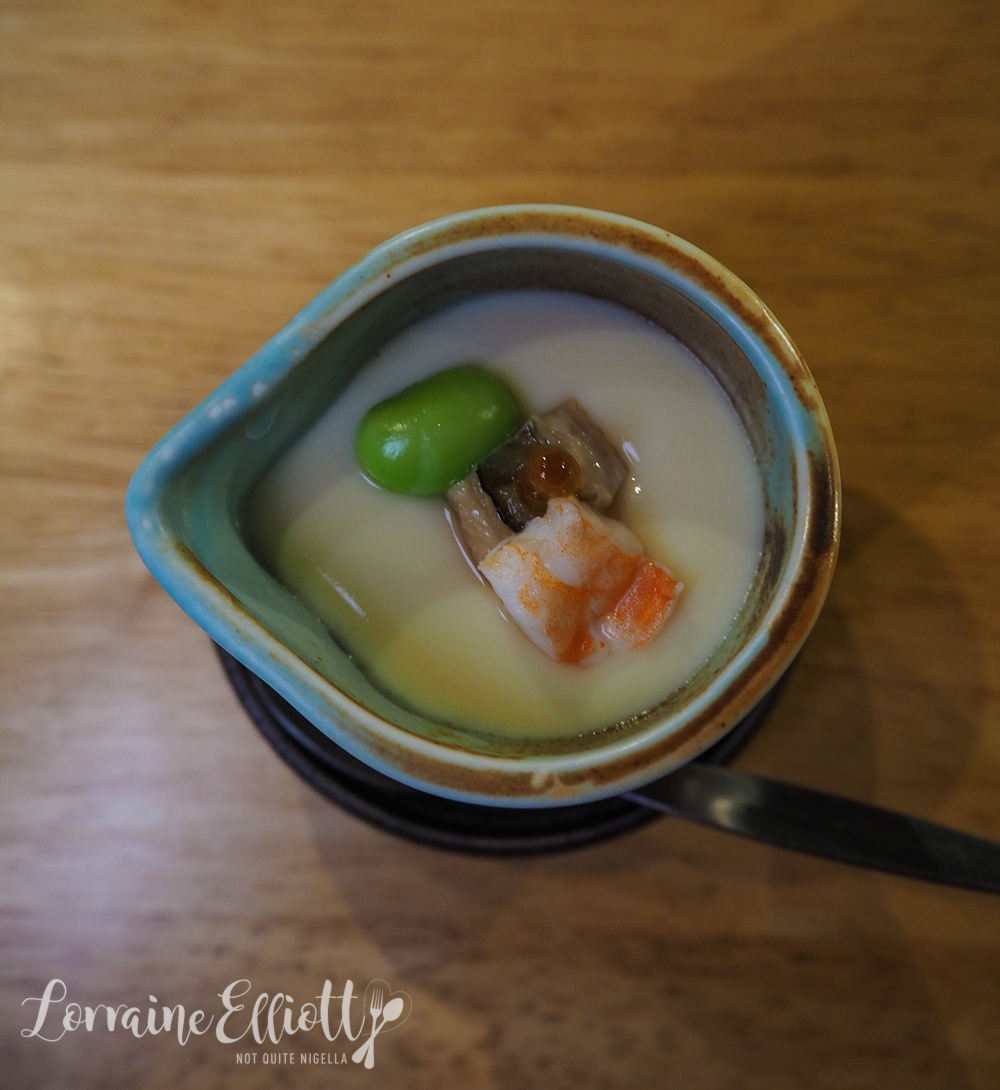 The chawan mushi is a dish that comes from the kitchen and is a small but perfectly portioned silky egg custard with edamame, crab, eel and ikura roe. It's silky, slippery and comforting. 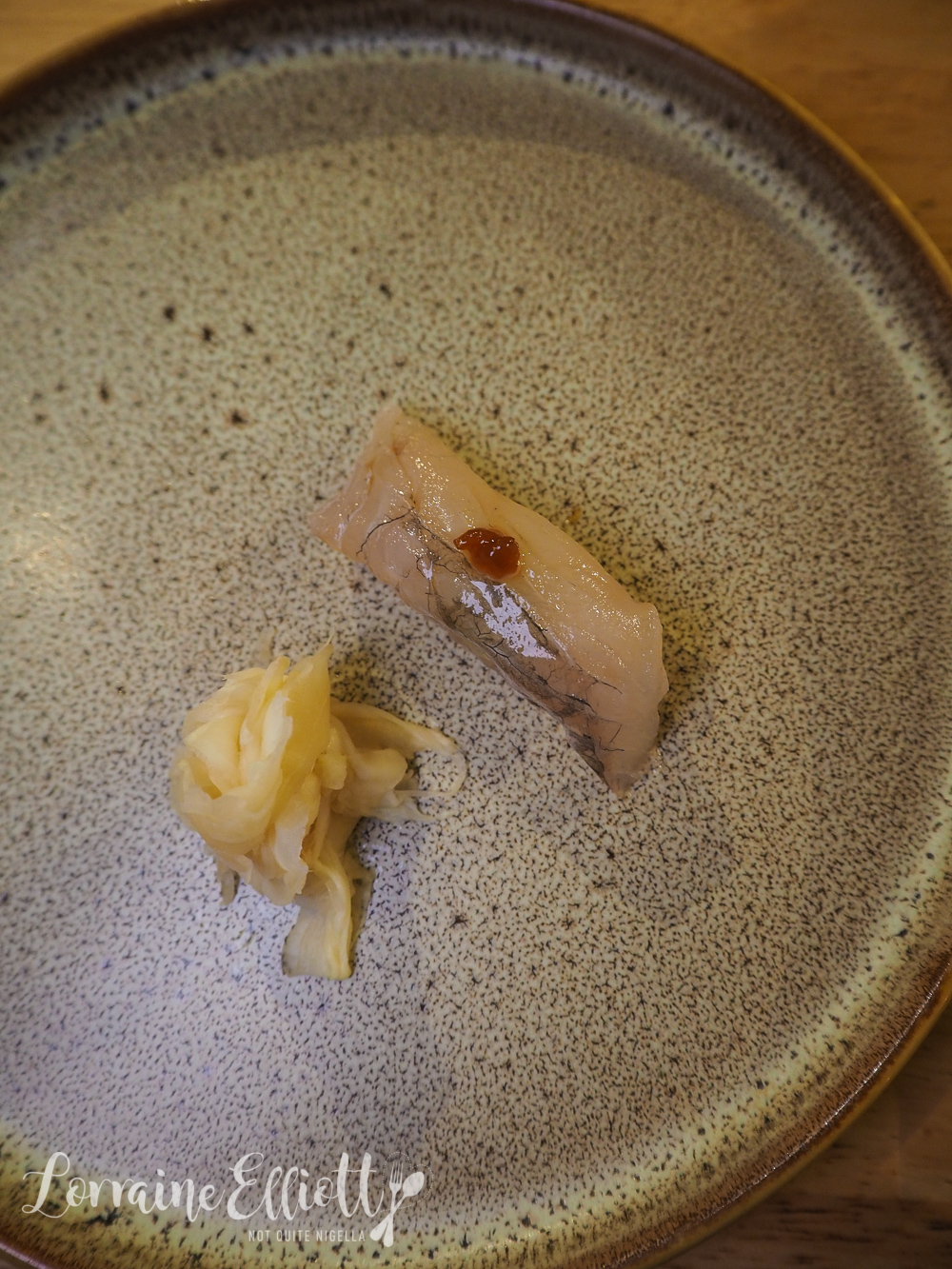 Then chef Rio places a plate in front of us with some ginger on it to begin our sushi courses. The flounder is preserved kobujime style (between slices of kombu seaweed). The kombu adds a good flavour to the dish and on top is plum, brown sugar and ginger. They use sushi rice flavoured with red vinegar in their rice. 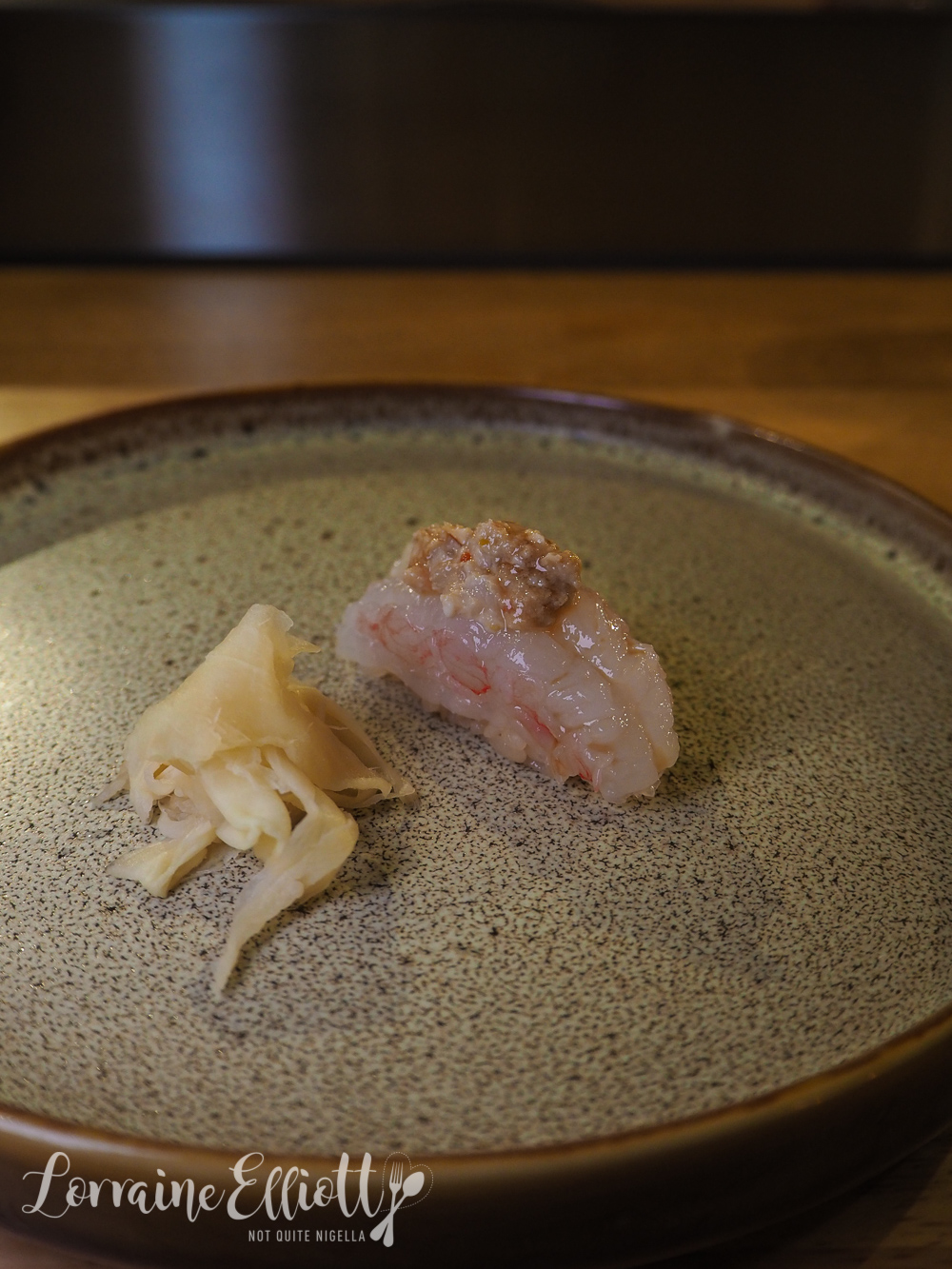 The scampi is luscious and topped with a mixture with scampi brains. He explains that he sprays the sushi with soy sauce to season it to evenly distribute the soy sauce but also to season the brains on top evenly (rather than brushing it). 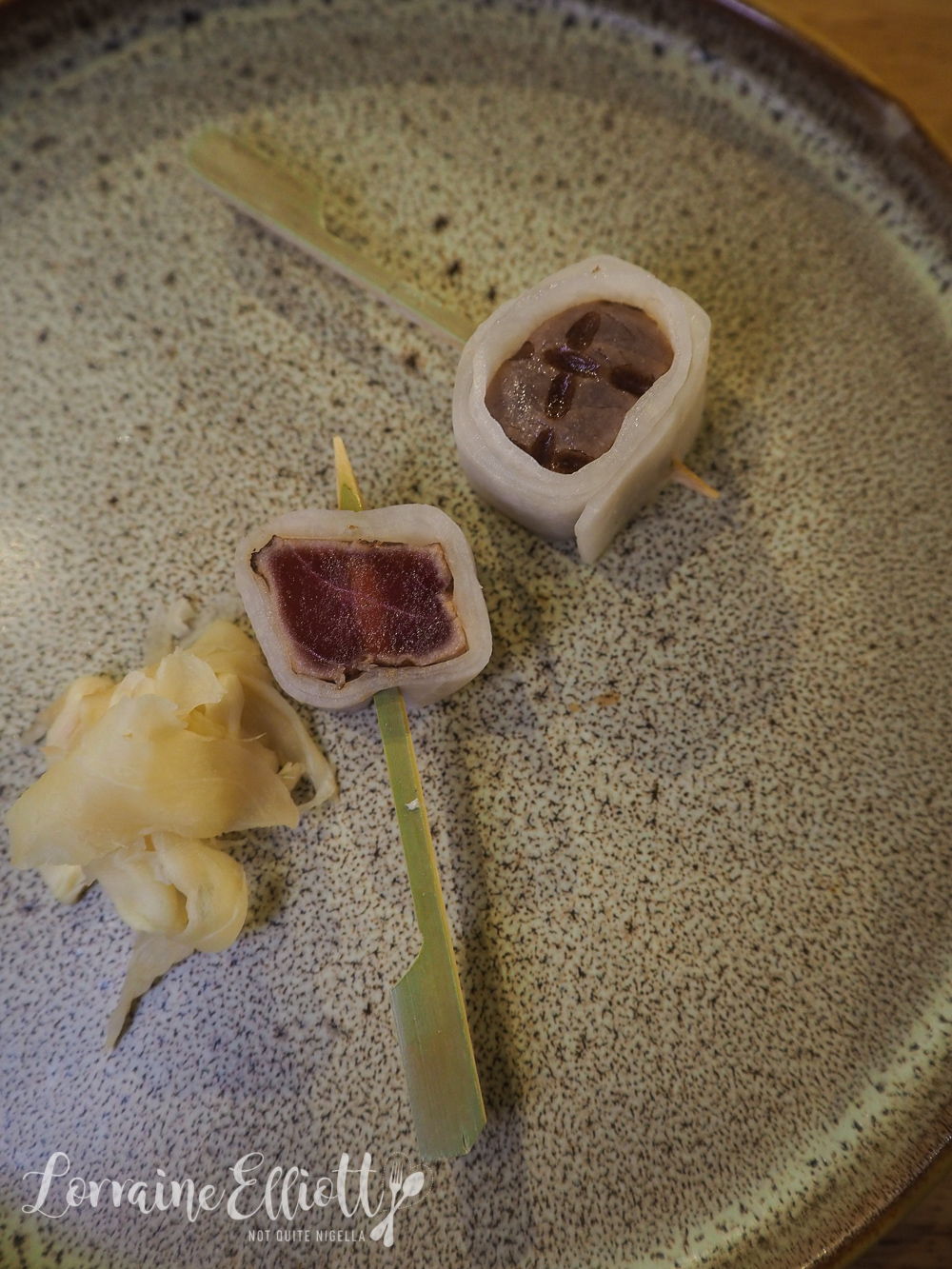 The tuna with daikon maki is served on a toothpick. There is a seared tuna cube wrapped in white radish or daikon marinated in vinegar and yuzu it is smokey, punchy and tangy. 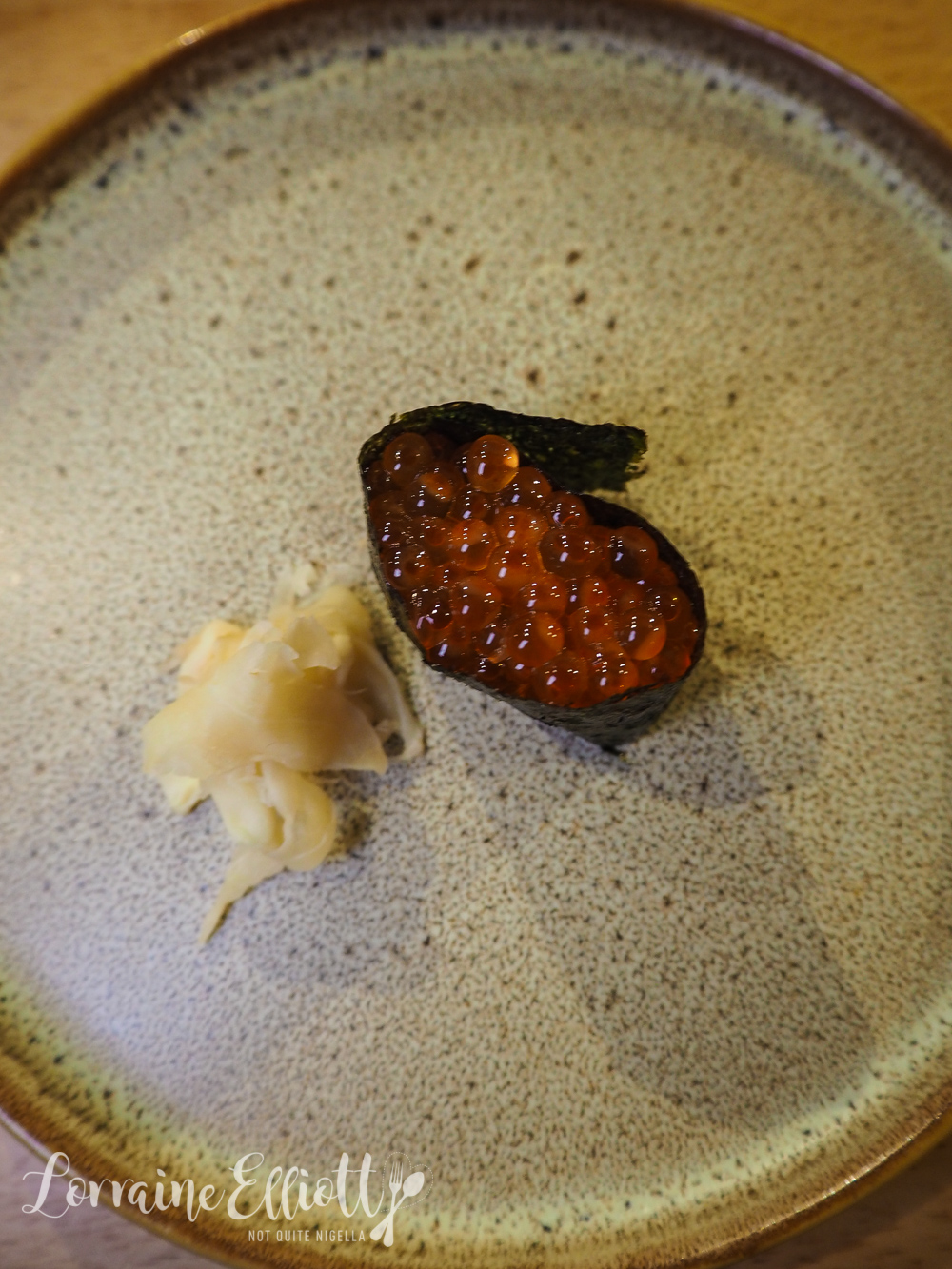 Rio explains that he likes sweet flavours so he balances the ikura sushi, normally a very savoury roe with sweetness from mirin and sake. I like this sweeter take on ikura. 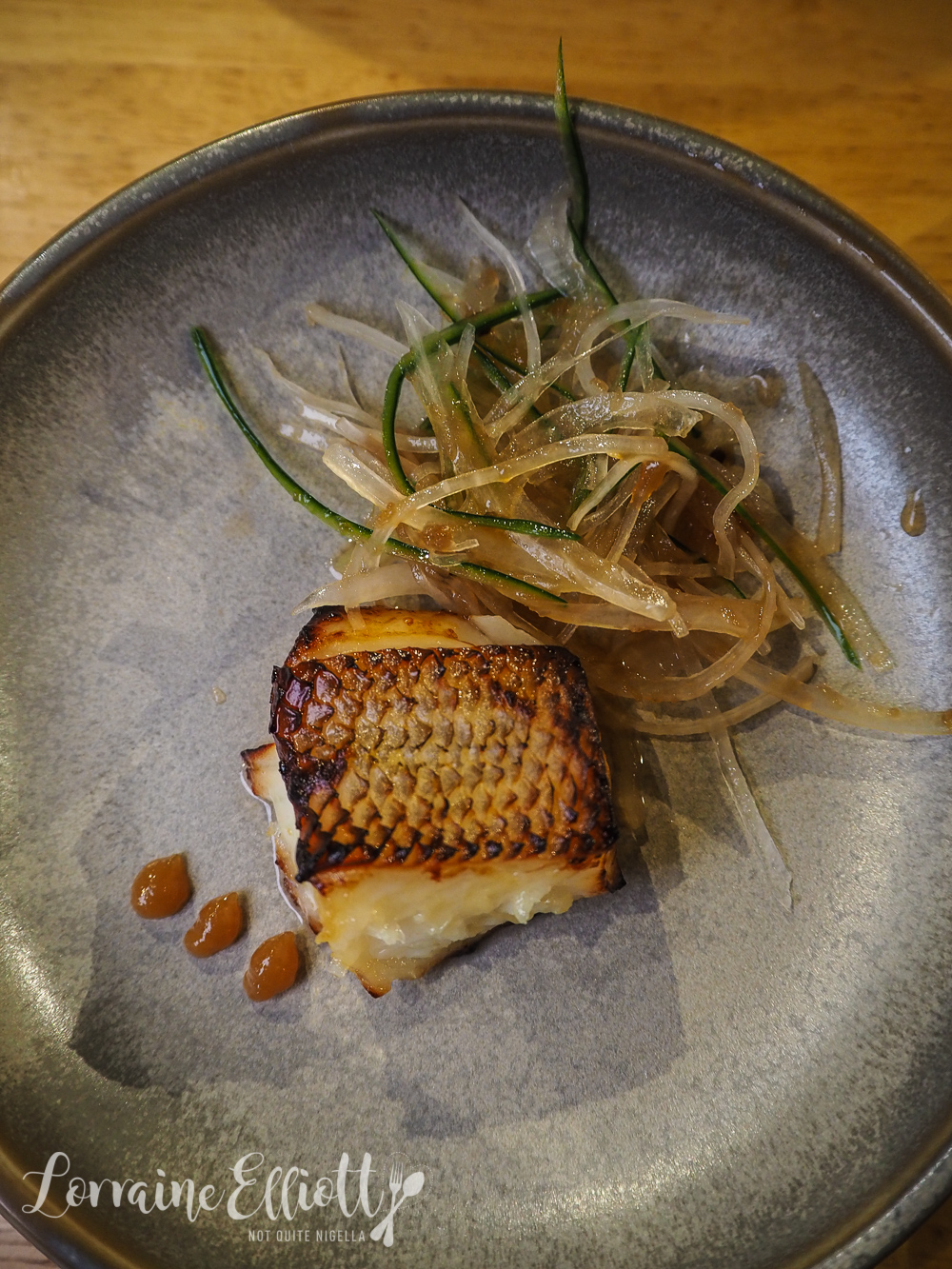 Next comes a dish from the kitchen. It's a Heard Island Glacier 51 Toothfish saikyo miso yaki aka grilled in white miso with deep fried spring onion and a daikon salad. The toothfish is good although it is hard to pick up with chopsticks as it flakes easily into small pieces. 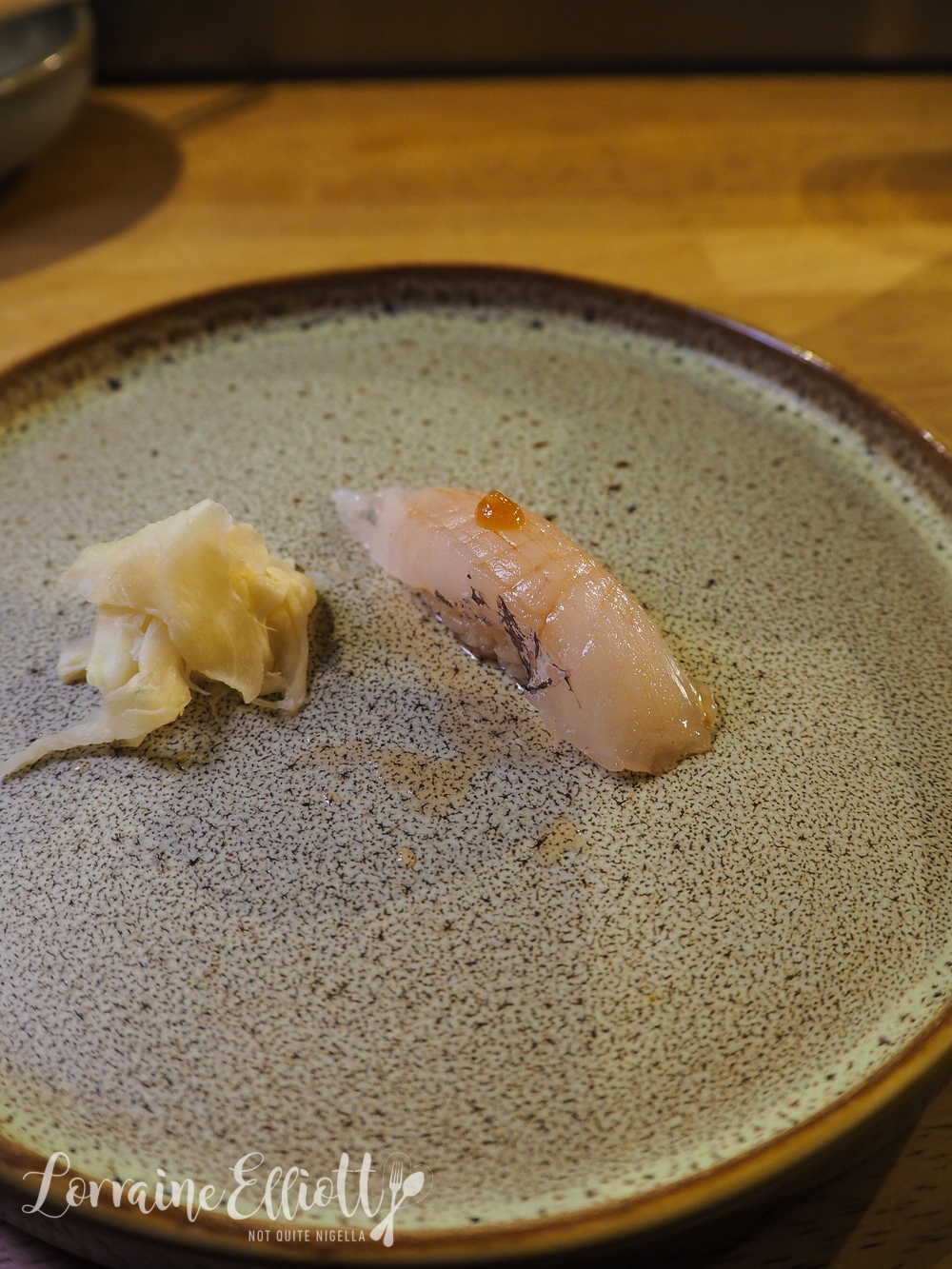 We're back in sushi land next and the first is a John Dory fragrant with yuzu and flavoured with miso. 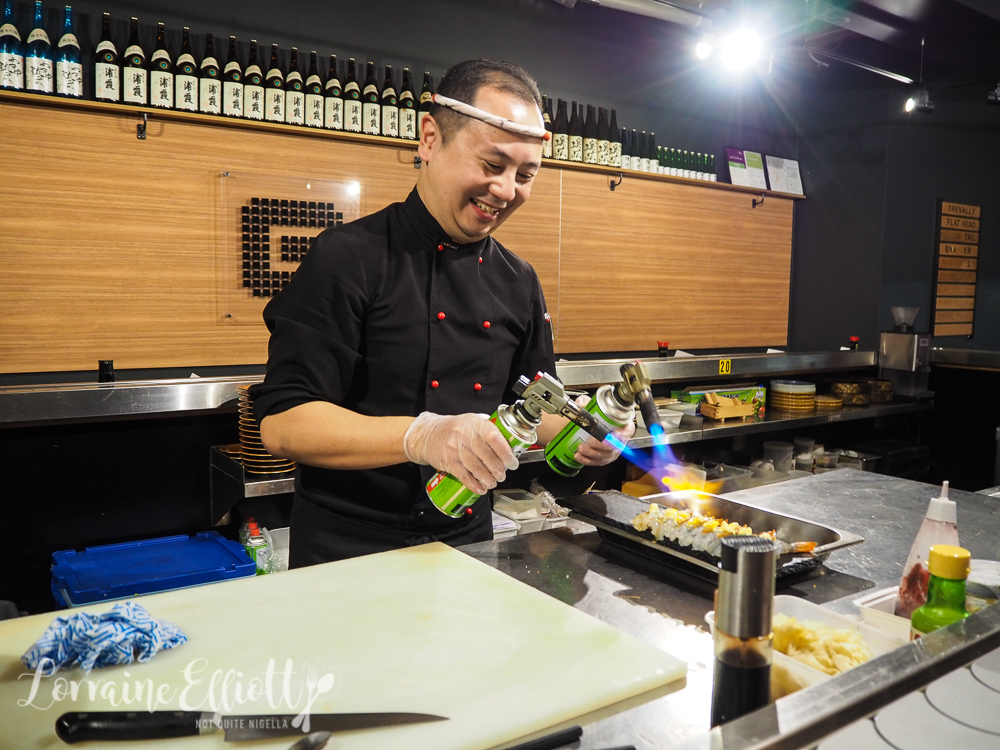 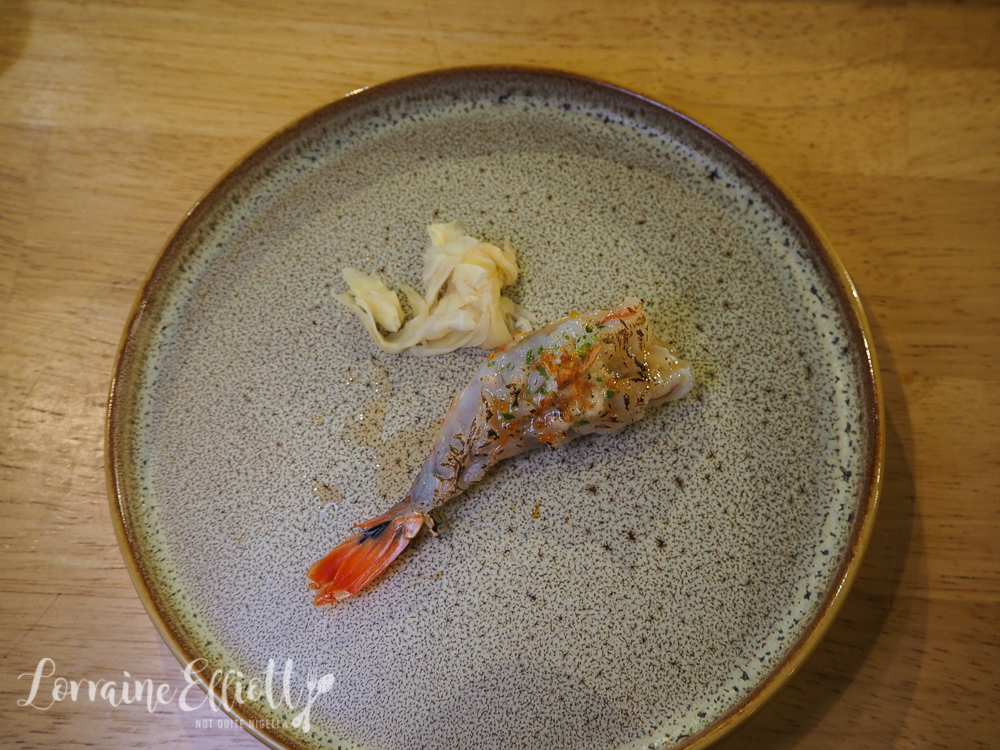 Then we watch as he tops the Aburi paradise prawn from New Caledonia with a mixture of garlic, cheese, butter and mayo which is then torched to melt all over it. This is heavenly and definitely one of my favourite courses for the lusciousness of the scampi and that garlic, butter, cheese mayonnaise. 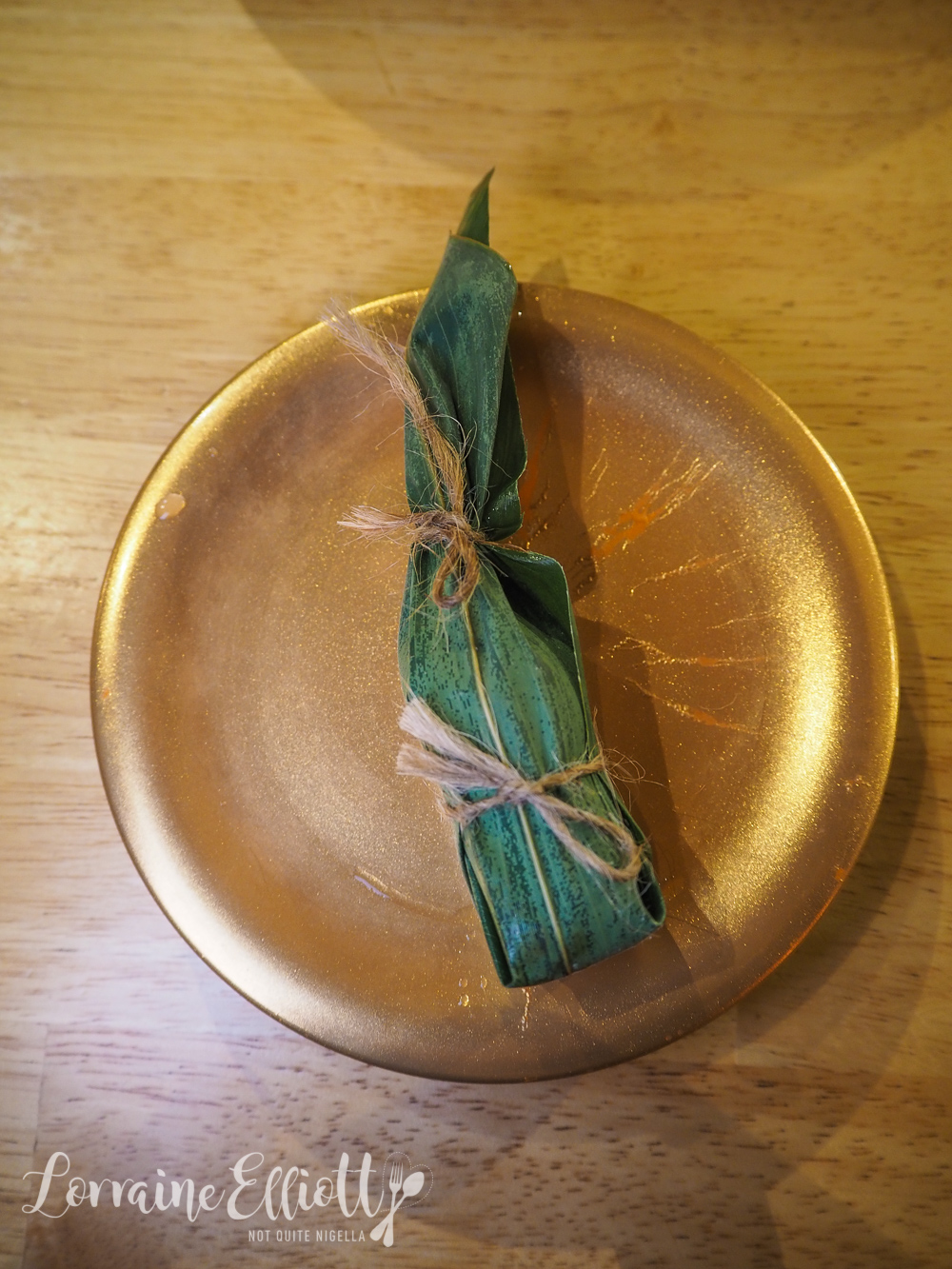 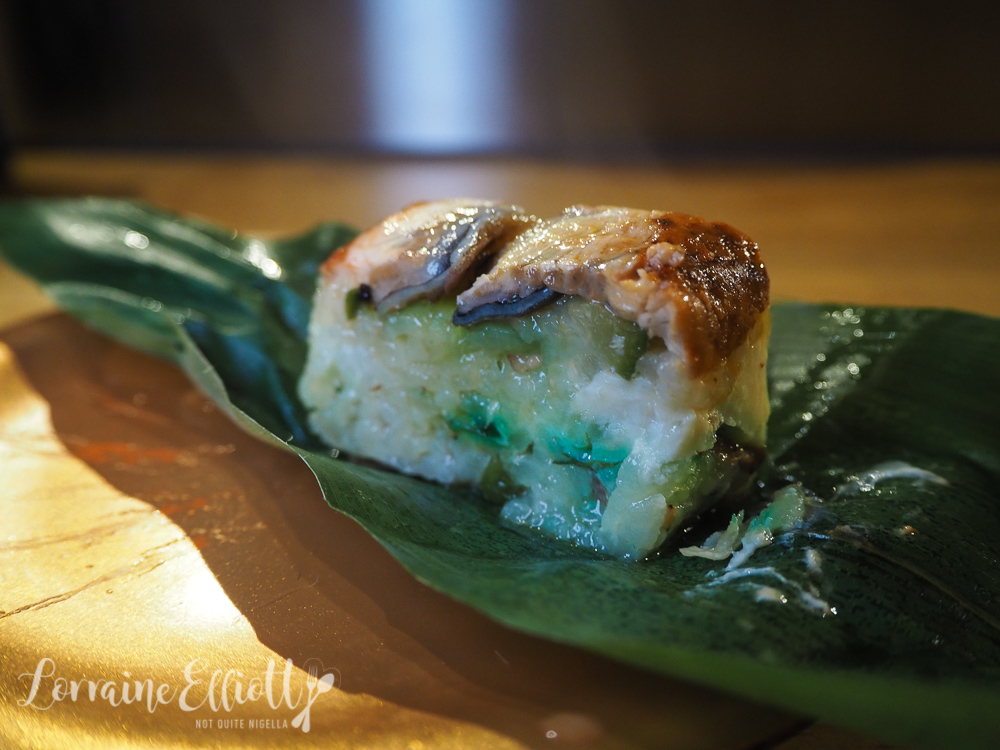 The chimaki is a version of lo mai gai, the Chinese lotus leaf wrapped rice dumpling. Here they use bamboo leaves filled with layers of white fish, eel, ginger, mushroom and seaweed. We enjoy this warm version of sushi and it has a good herbaceousness from being steamed in bamboo leaves. 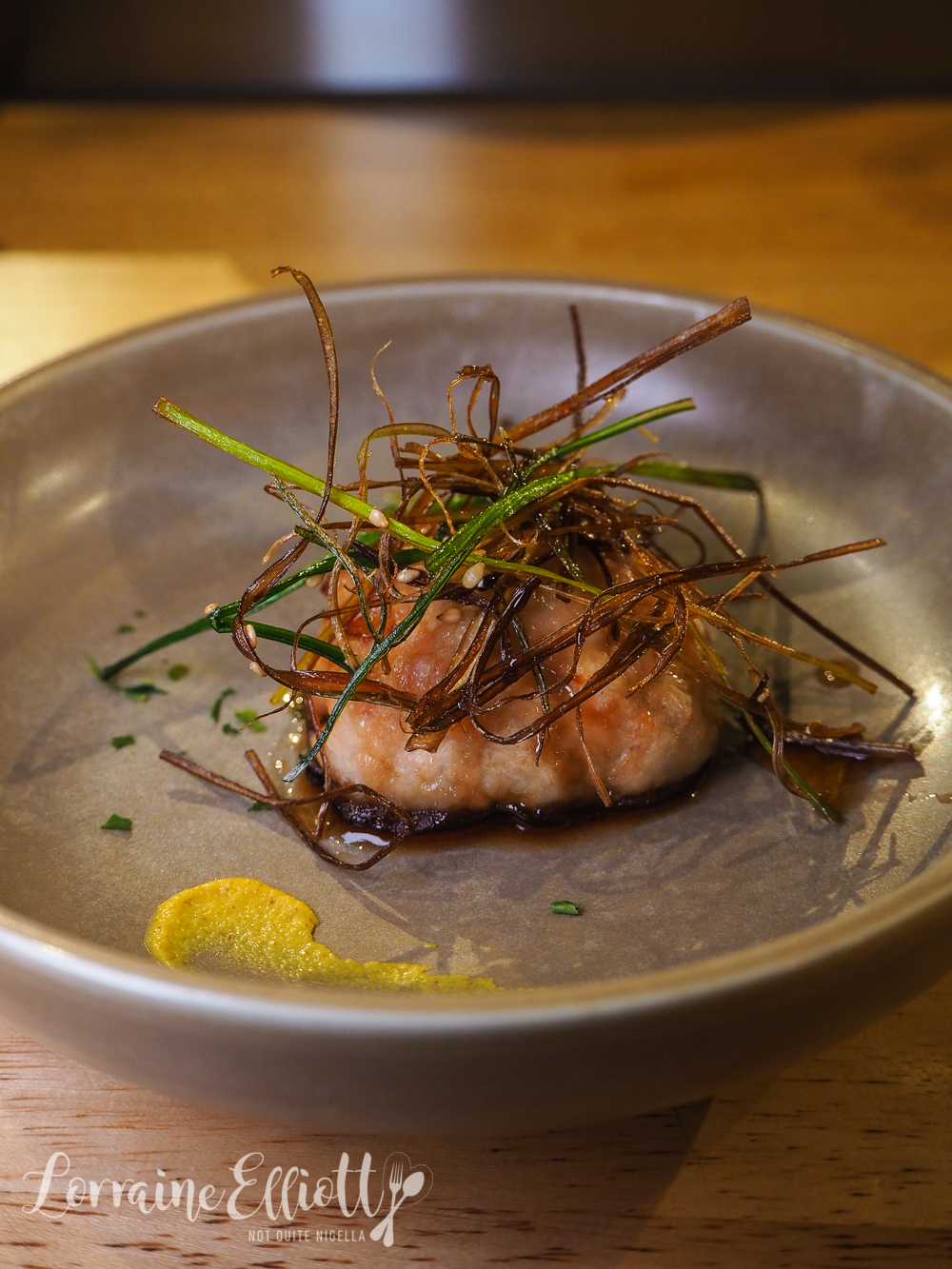 I like that the sushi courses are alternated with the hot courses from the main kitchen. The tsukune chicken meatball is plump and juicy and very tasty. 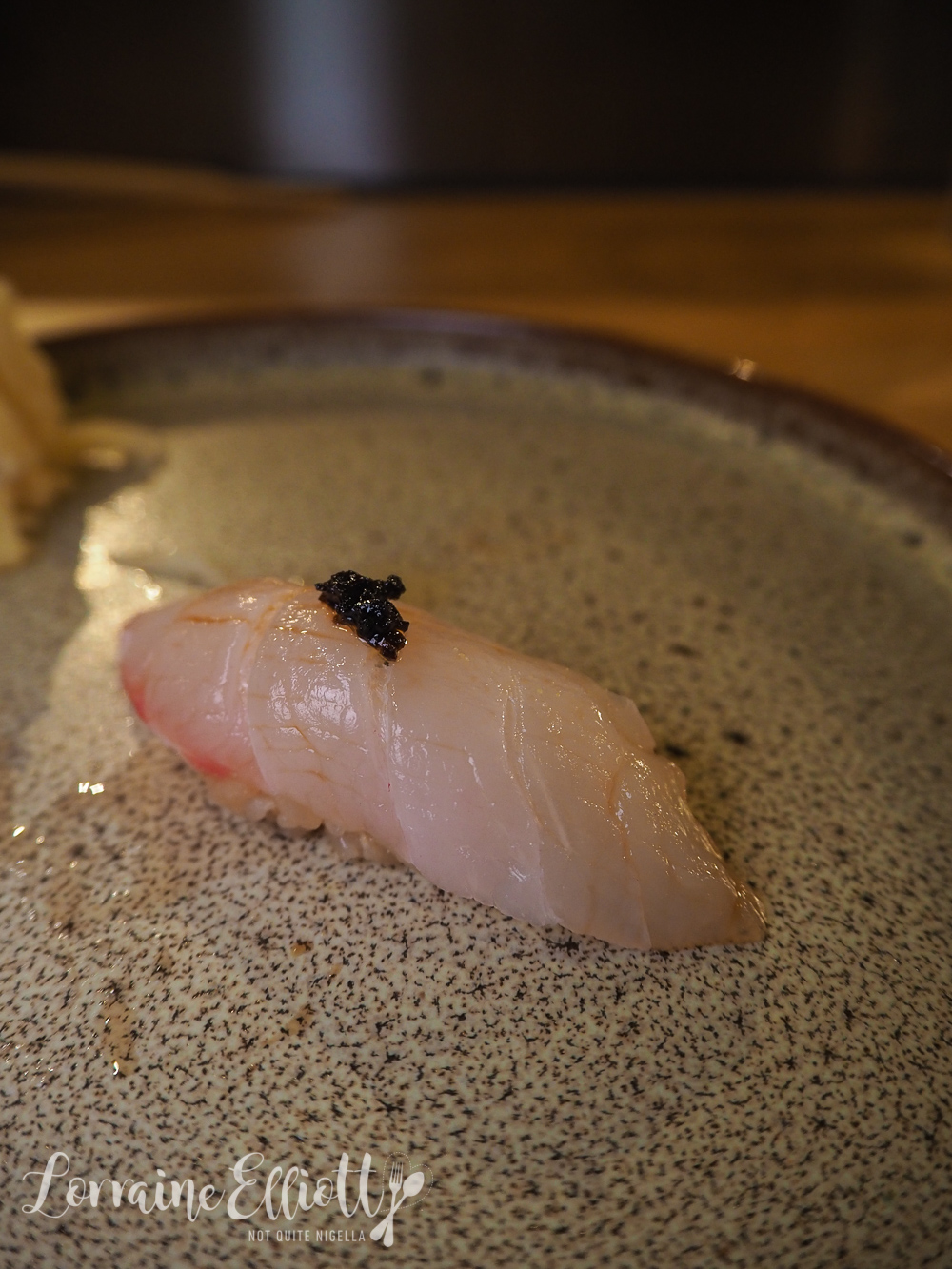 Then we have the bass groper with shio kombu on top to give it a bit of a flavour hit. 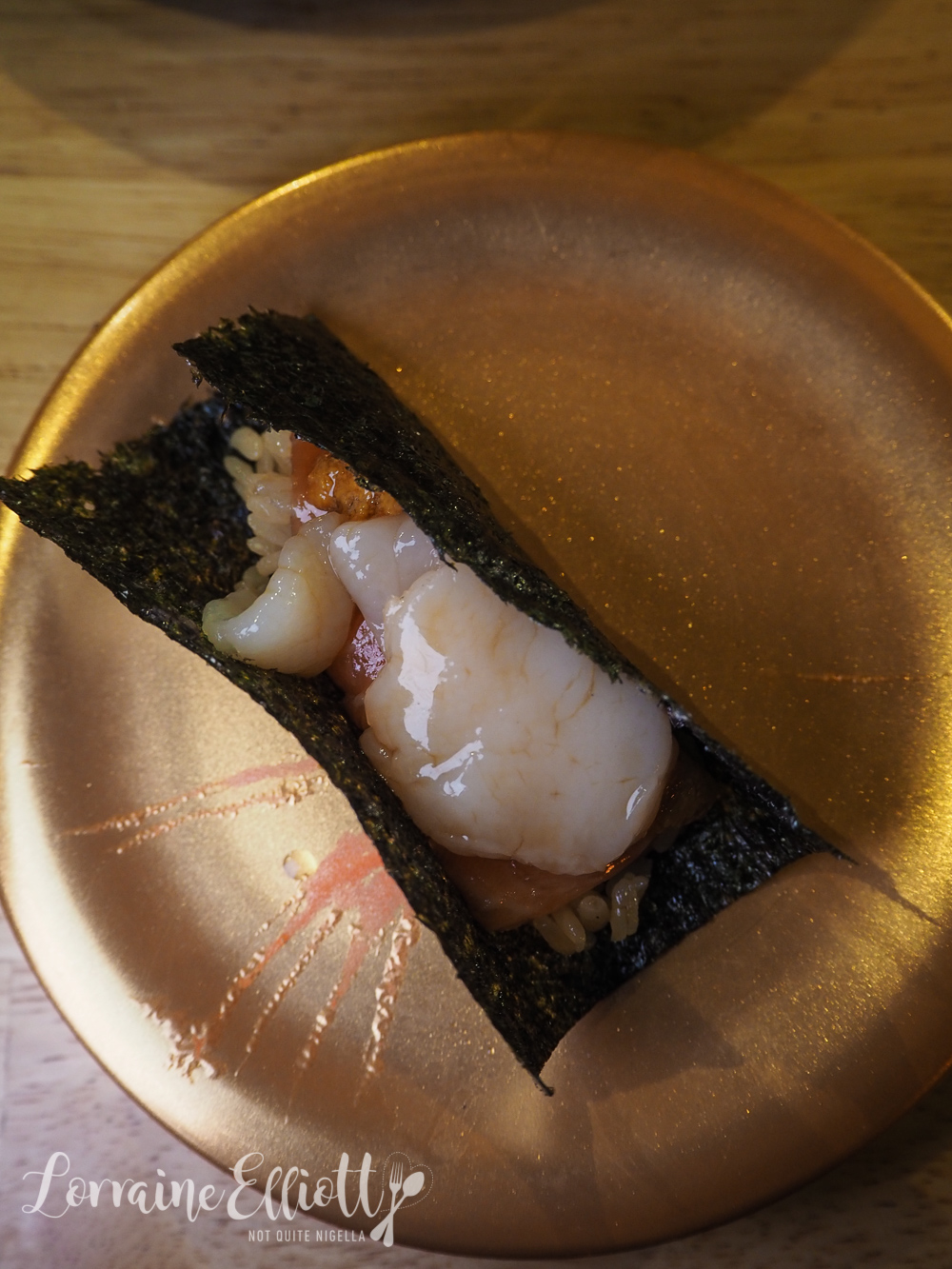 The next course is a luxurious hand roll filled with Tasmanian sea urchin, Hokkaido raw scallop and Tasmanian Salmon with yuzu kosho to flavour it on a little bit of rice. This is all wrapped in nori and you use your hands to eat this silky textured bite. 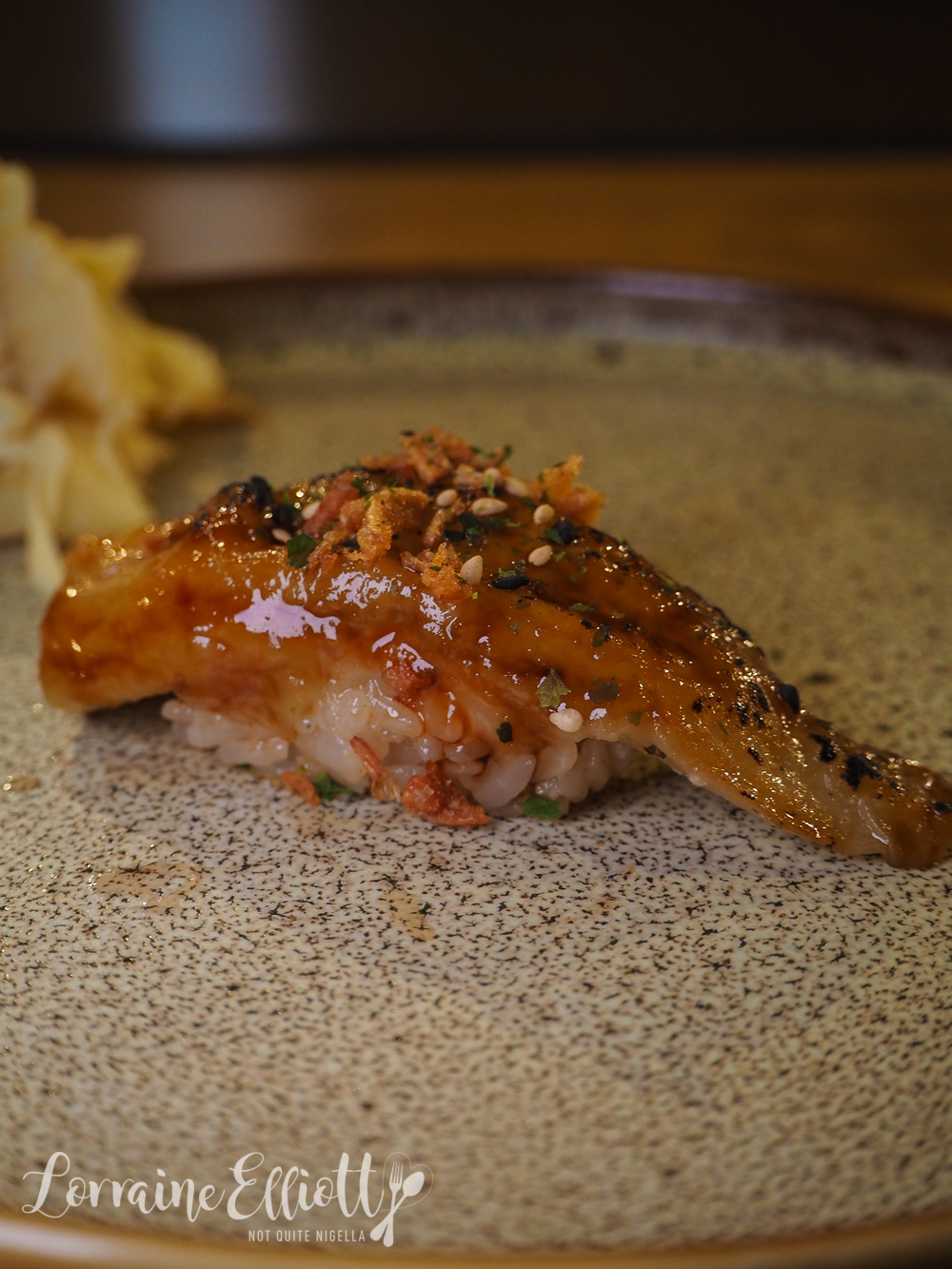 Then he torches some soft eggplant flavoured with yuzu and presents a lusciously silky eggplant topped sushi with sesame seeds. 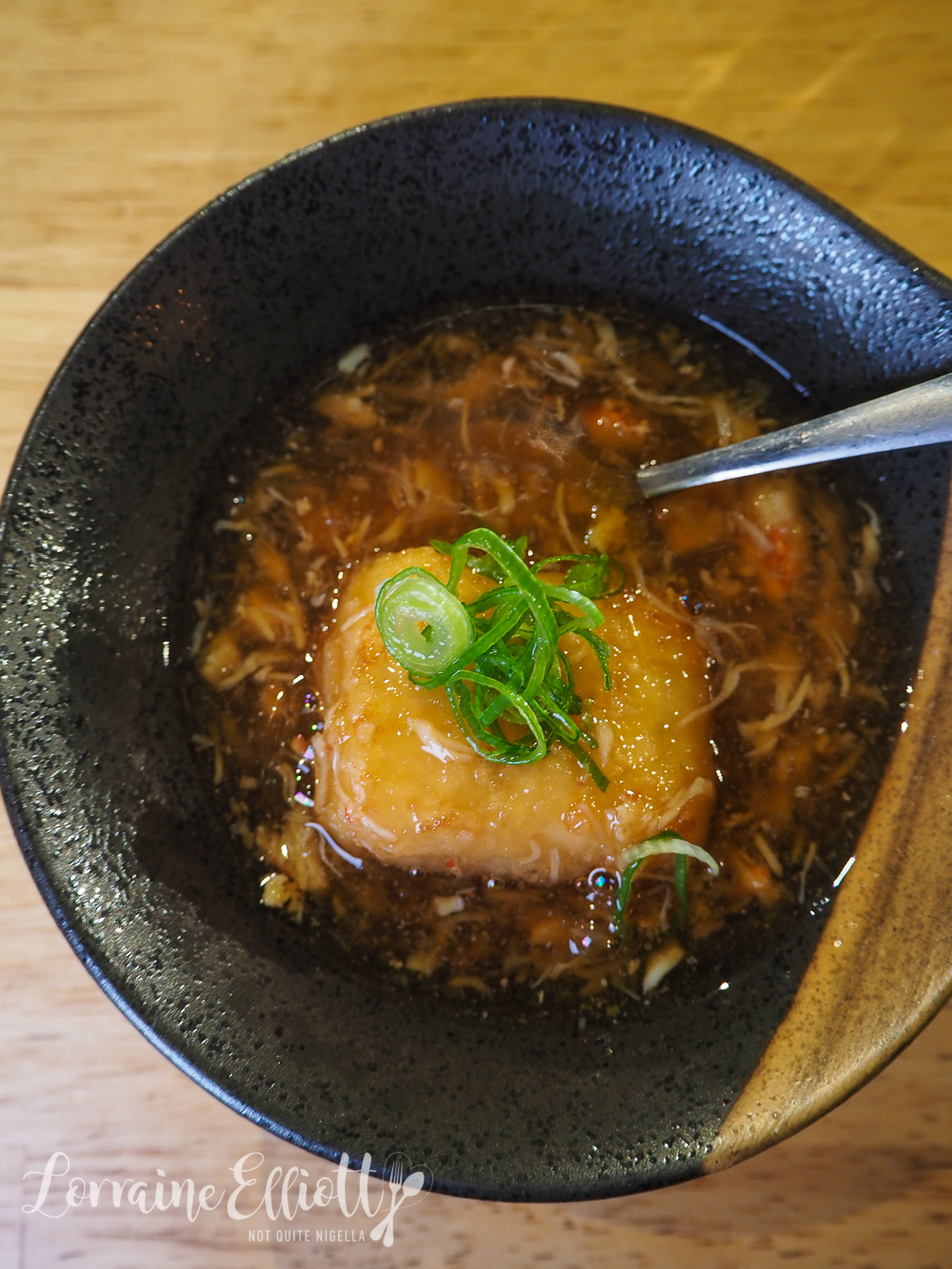 Next is a sesame tofu agedashi. I can either take or leave agedashi tofu but this is one of my favourite ones. It has a snow crab ankake sauce (ankake is a Japanese sauce thickened with cornstarch). Monica lifts the bowl to get every last drop. 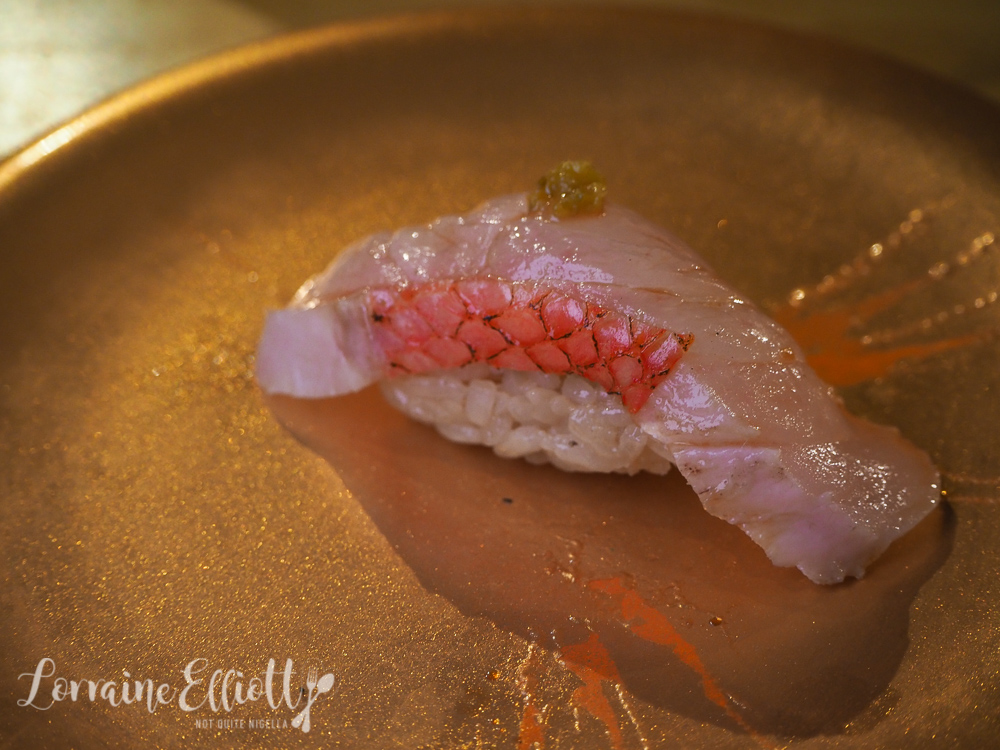 Then come our final four sushi courses. The Imperador sushi is served with yuzu kosho. 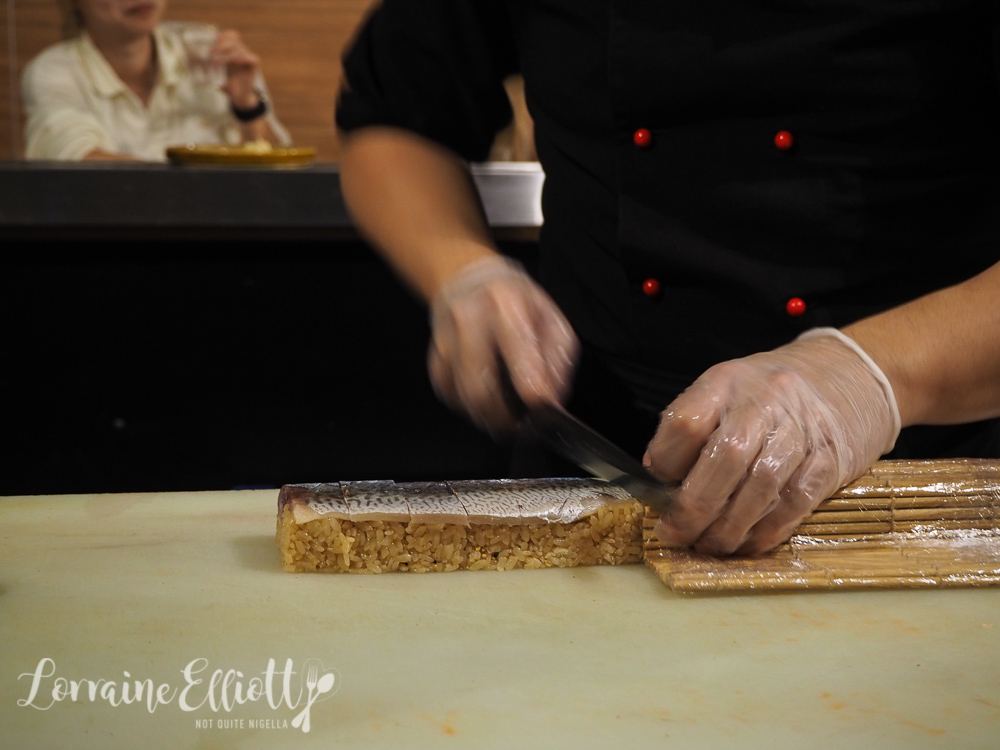 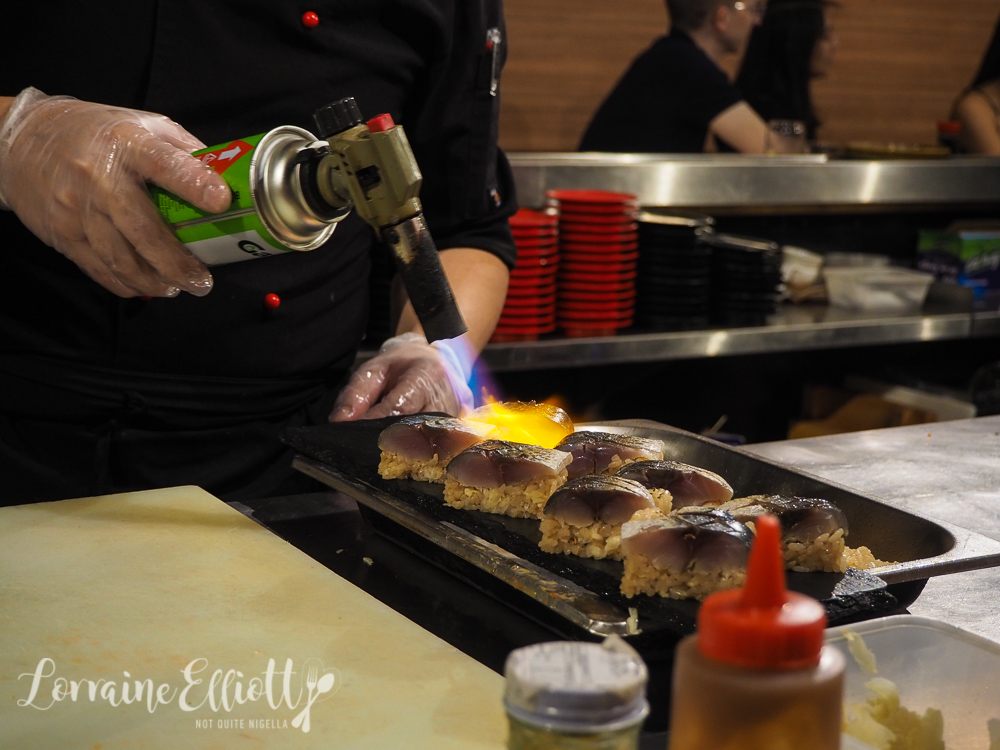 The blue mackerel is done Osaka style in a box and we watch as he slices cross cuts on top of the vinegared fish and places it in the wooden box. 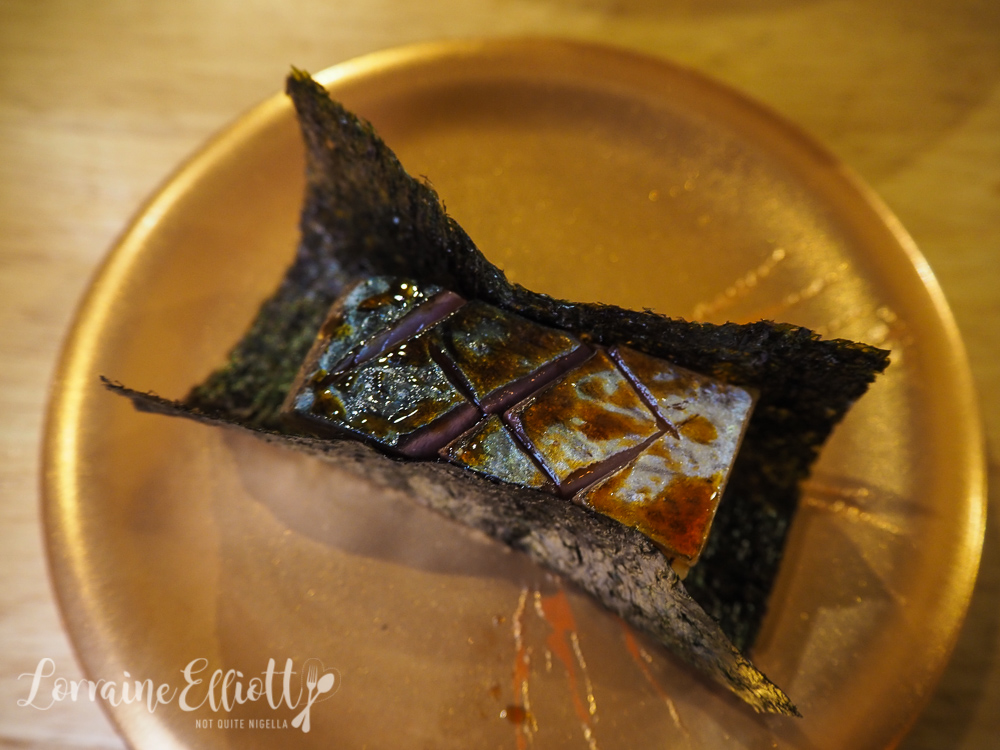 It's sweet and vinegary and I love this style of sushi. It's a nice treat as hako sushi (hako means box) isn't very common here. It was developed in Osaka as a way of preserving the fish. 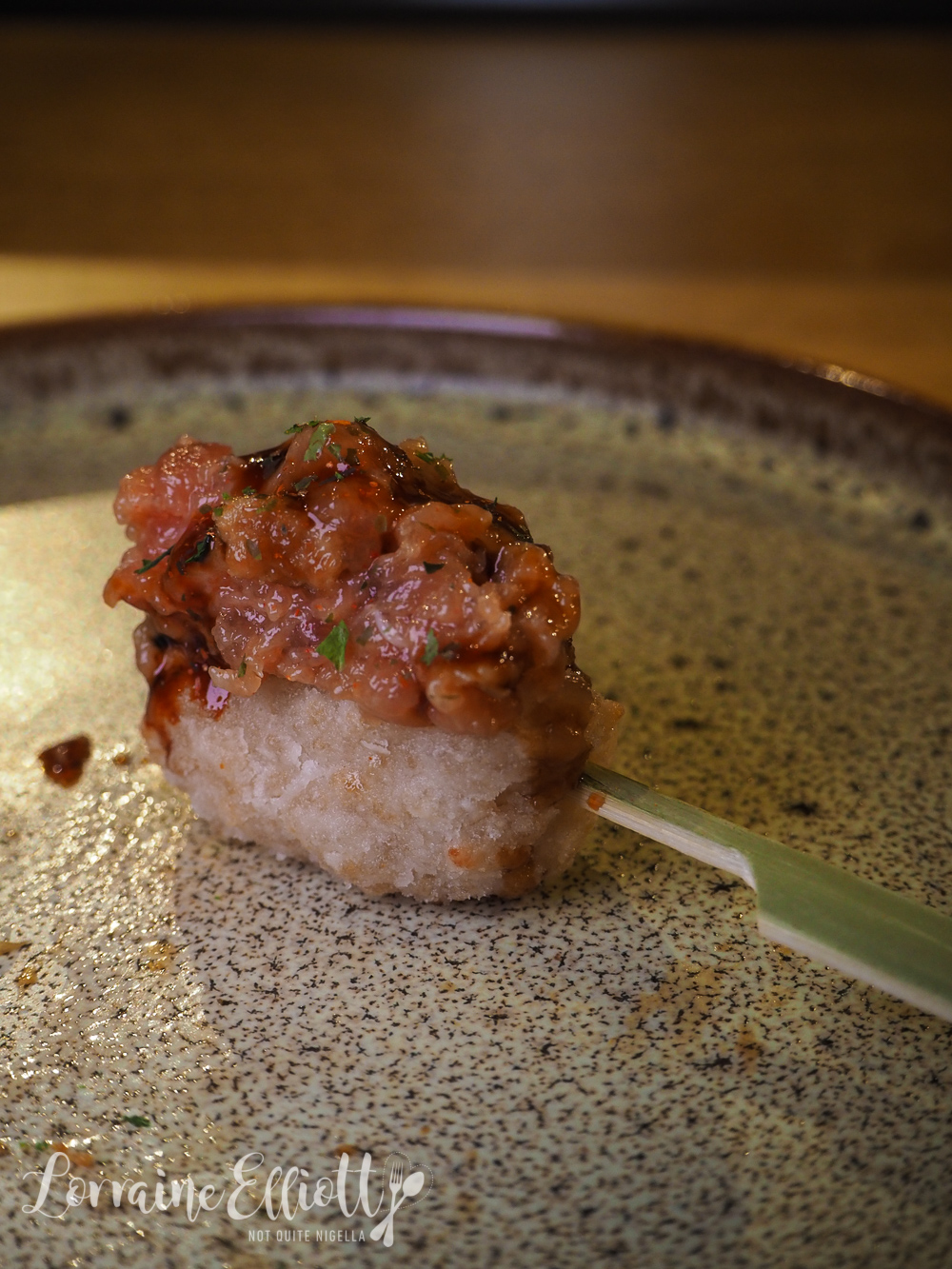 The second last sushi is a tuna tartar with finely chopped spicy raw tuna on top of a crunchy rice base for that creamy, crunchy texture combo (best dipped in soy). 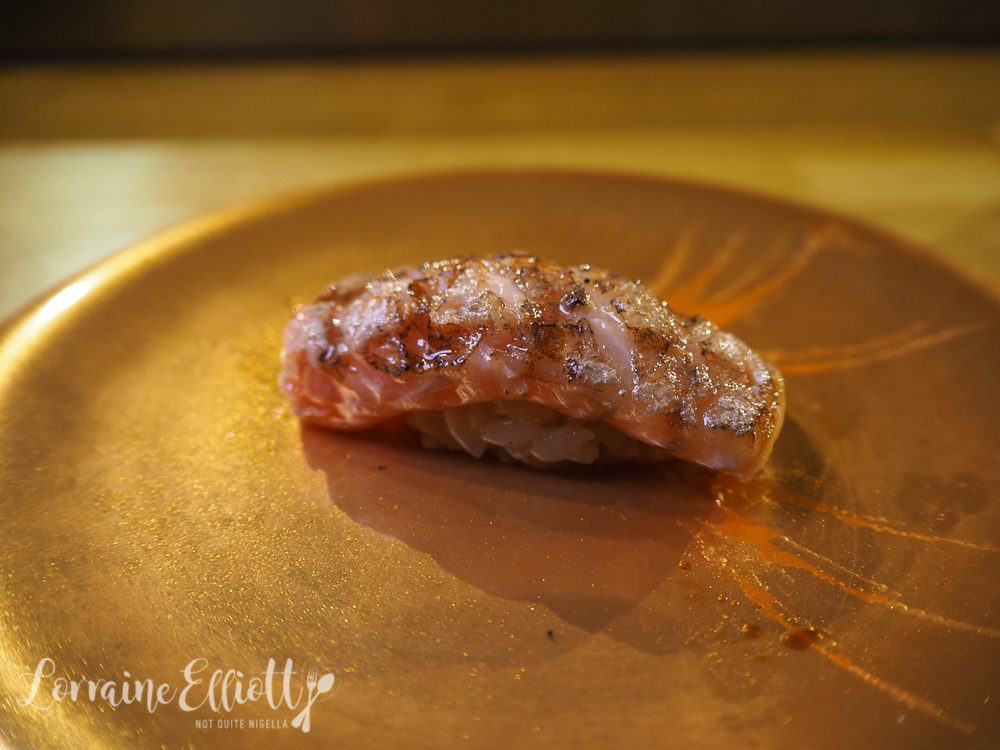 And for the final savoury course, a flourish with the luscious aburi salmon belly, all intense fattiness in just one sumptuous bite. 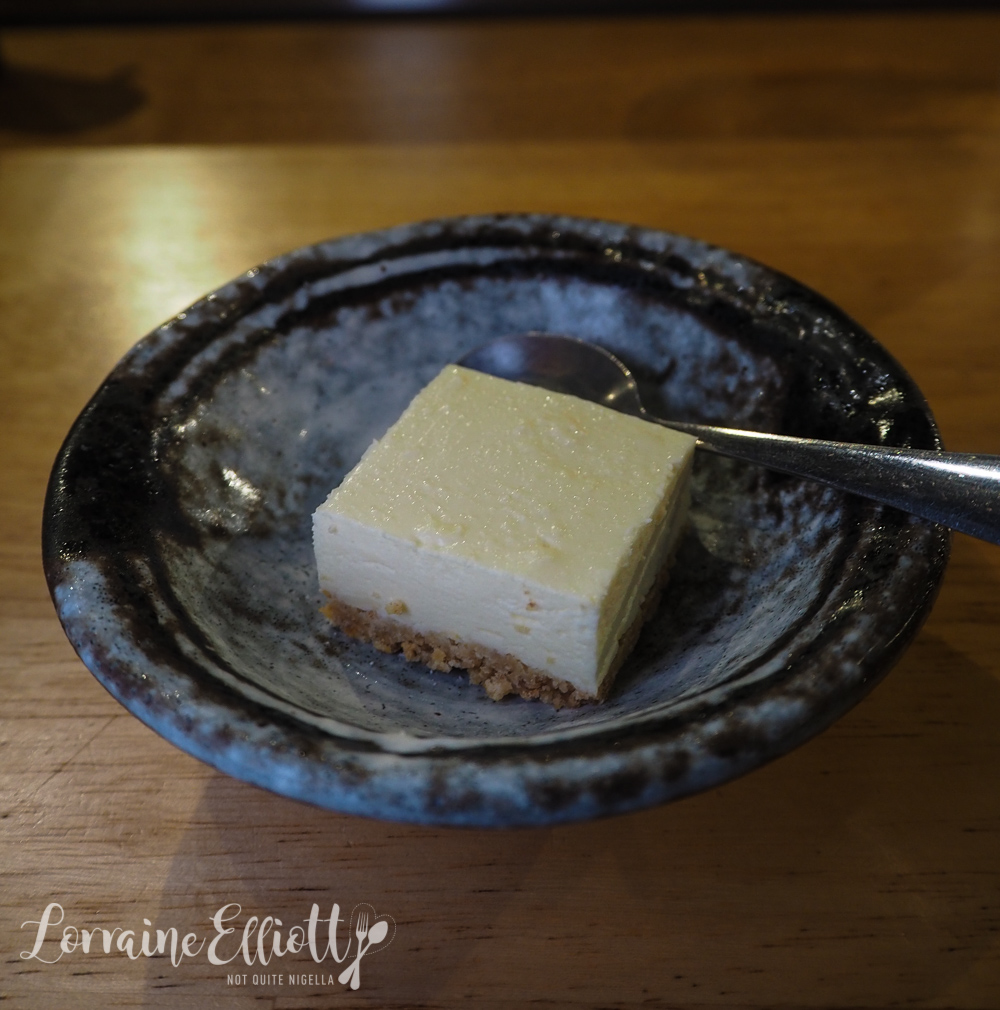 There is dessert, it's a yuzu cheesecake square. I didn't find it particularly strong in yuzu and I think if I could do it again, I'd end on sushi.

So tell me Dear Reader, do you have a favourite sushi fish or type of sushi? How do you feel about omakase style of eating?