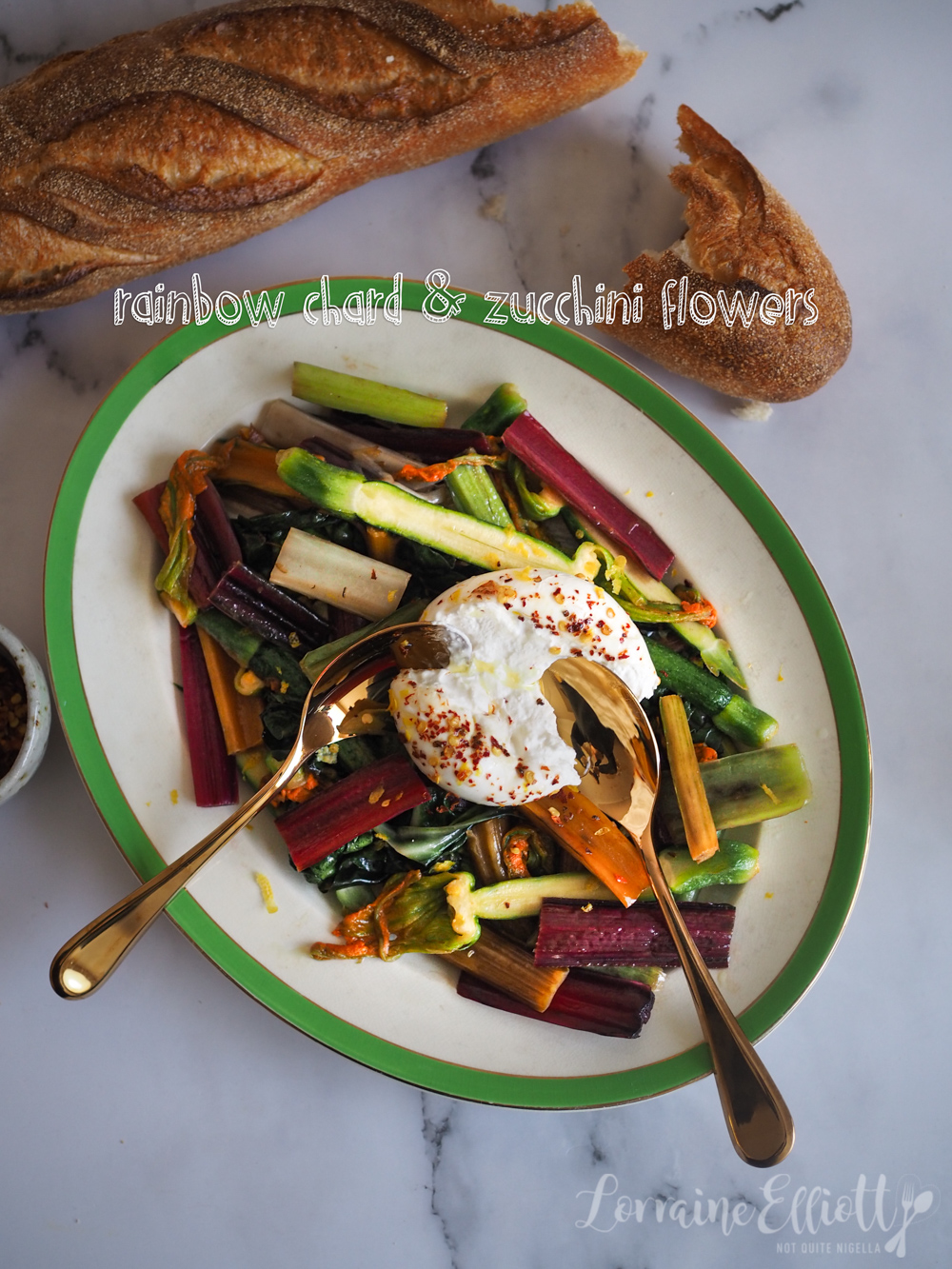 Spring is here and bring on the colourful, spring produce! Make the most of the beauty of rainbow chard with this simple, spring and summer friendly recipe. Colourful rainbow chard stems are sautéed with zucchini flowers with olive oil and salt and then dressed with honey, chilli and a whole burrata! This makes a wonderful side dish for any lunch or dinner.

Chard greens are also known as silverbeet (in Australia we know it as silverbeet while in America they call it chard). Rainbow chard is the same variety but with a colourful stem and comes as purple, orange, pink and yellow stems. It is a mild, slightly bitter green.

How do I keep the bright colour of rainbow chard? Keep the colour in the rainbow chard stems by removing the greens from the stems and cooking the greens separately. I actually love the greens in place of cavolo nero or spinach in curries and the greens tend to wilt the fastest and take up the most room in the fridge so whenever I get some rainbow chard, the leaves are the first to go. If you want to cook both the greens and the stems, cook them separately and then toss them together once cooked.

Don't skimp on the burrata. You want at least 1 very plump burrata that will spill its creamy juices all over the vegetables or two less pleasingly plump ones. Honestly mine was a little small and I should have had 2. 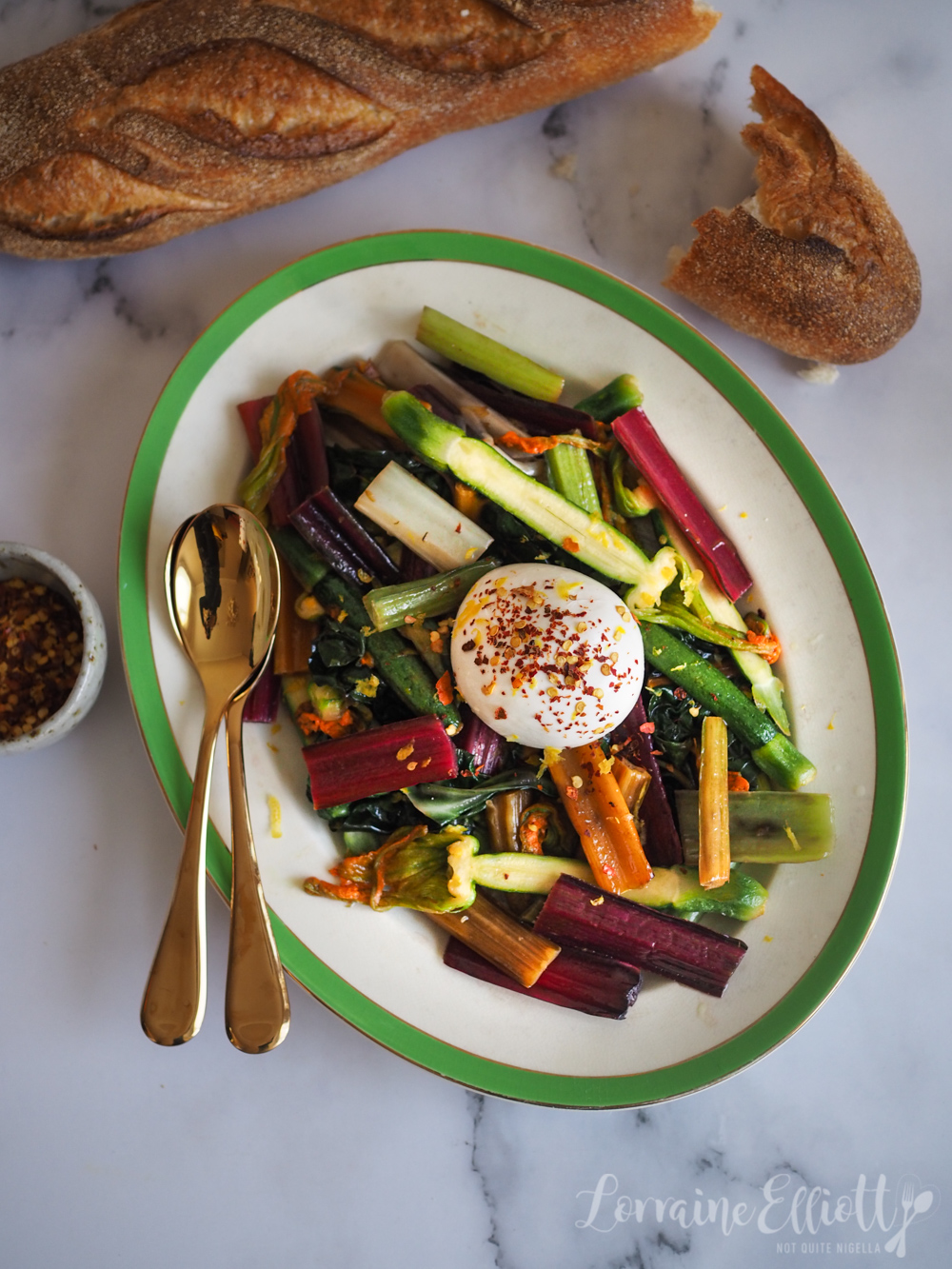 Apart from recommending you give this delicious side dish a try I also have some tv recommendations. These have been very popular on my Instagram stories so I thought I'd share them here with a bit more detail:

Ted Lasso (apple tv): the world is going to hell right now and Ted Lasso will be the nicest distraction from the news. Ted Lasso a feel good comedy with great characters and drama too. It's about an American football coach that goes to England to coach a soccer team. Charming is probably the best word for this show.

Clickbait (Netflix): this is a murder mystery series and if you want something utterly bingeable you will plough through Clickbait in about a day. I always look up tv shows and movies on rotten tomatoes and I noticed that while critics didn't like it viewers loved it. Each episode of Clickbait is told from the perspective of a different character and the twist at the end is completely unexpected and bonkers.

Why Women Kill (Paramount +): I'm so excited that Why Women Kill is back! I adored the first season with three storylines about different women in different eras. Season 2 is different as it only focuses on one woman set in the 1949 who will do anything to get what she wants which is a spot in a garden club. It's funny, well paced and with real pathos as you alternate between feeling sorry for the main character and hating her. This is only on Paramount + which doesn't have much on it really so I'd recommend getting the free 7 day trial.

Good Girls (Netflix): I saved my favourite for last. Good Girls is about three mums who turn bad due to desperation and decide to rob a store at gunpoint and then get involved with some shady characters. Honestly at first I didn't like it. I found the three main characters exasperating and I hate chaotic people and have less of a tolerance for them nowadays during lockdown. Plus these three women make some monumentally stupid decisions. But they totally grow on you and by season 2 I was totally hooked. There's incredible chemistry between one of the mums Beth and a gang member Rio. I found Annie hilarious, Ruby is the (sliding) moral compass and Beth is a bit annoying but she's the vessel in which you will work out all of your Rio fantasies (seriously). Also there are four good sized seasons to work through. Sadly this was cancelled prematurely and we deserve a season 5!

So tell me Dear Reader, what tv show recommendations do you have? Have you watched any of these shows and what did you think of them? 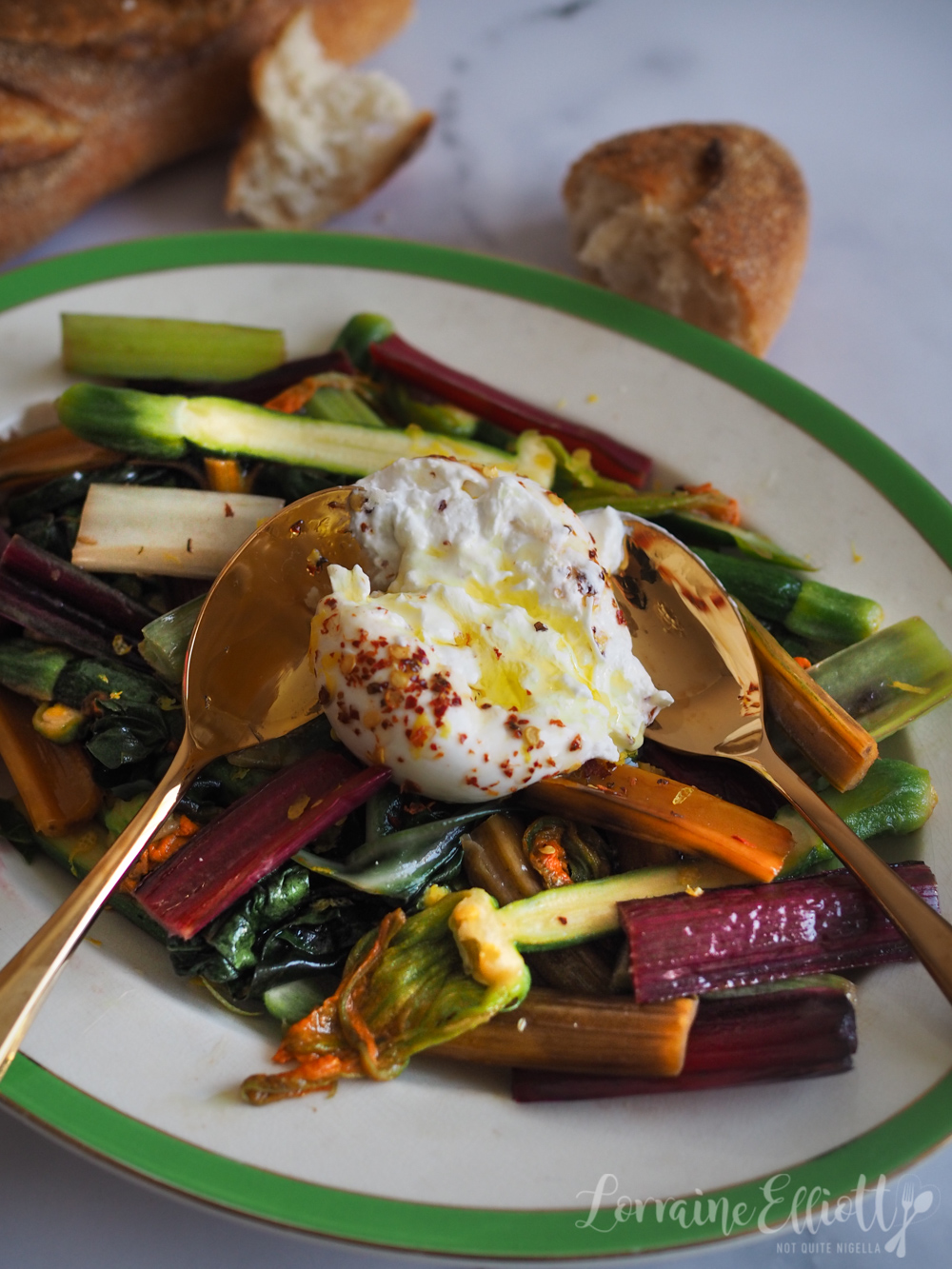 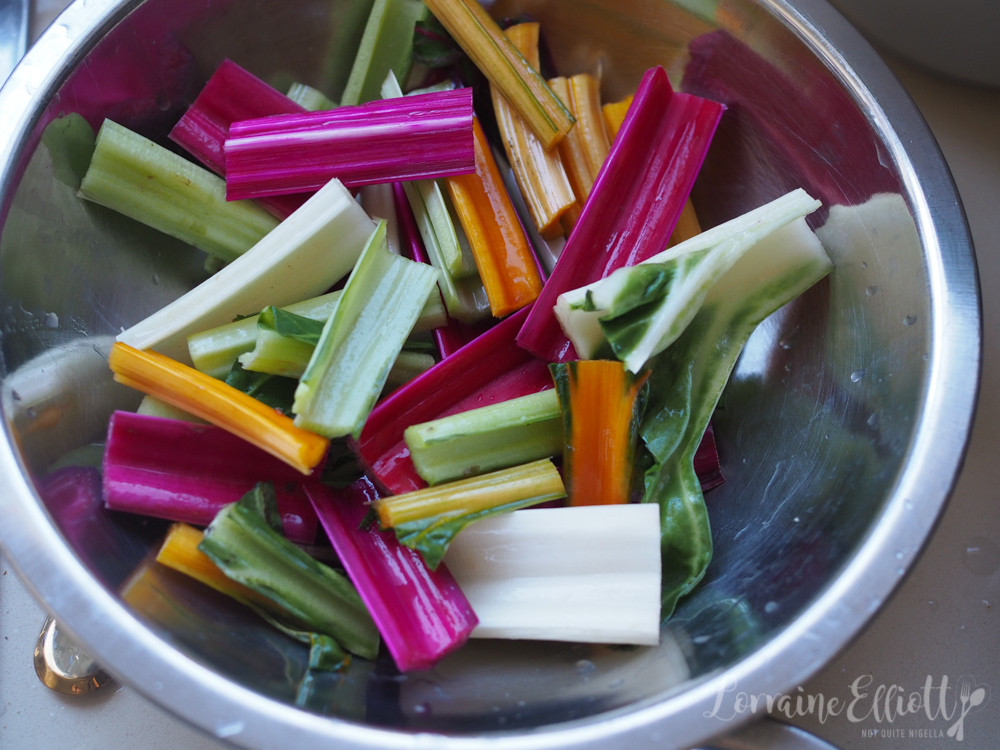 Removing the stamens from the zucchini flowers

Step 2 - Heat half of the oil in a large frying pan on medium heat and add the onion and cook until soft. Add garlic and cook for a minute. Then add the chard stems and cook for 5 minutes. Add some more oil and add the split zucchini flower bottoms and fry for another 3-5 minutes. I prefer chard when it is still has some texture but is not raw or too crunchy which takes around 8-10 minutes total on medium heat. Add the zucchini flowers and sauté for a minute or two, these don't take long at all. Season with salt and pepper, drizzle honey and sprinkle over chilli flakes and stir to coat.

Step 3 - Place onto a serving platter and place the burrata/s on top. Sprinkle the burrata with more chilli flakes and extra virgin olive oil and add basil leaves. 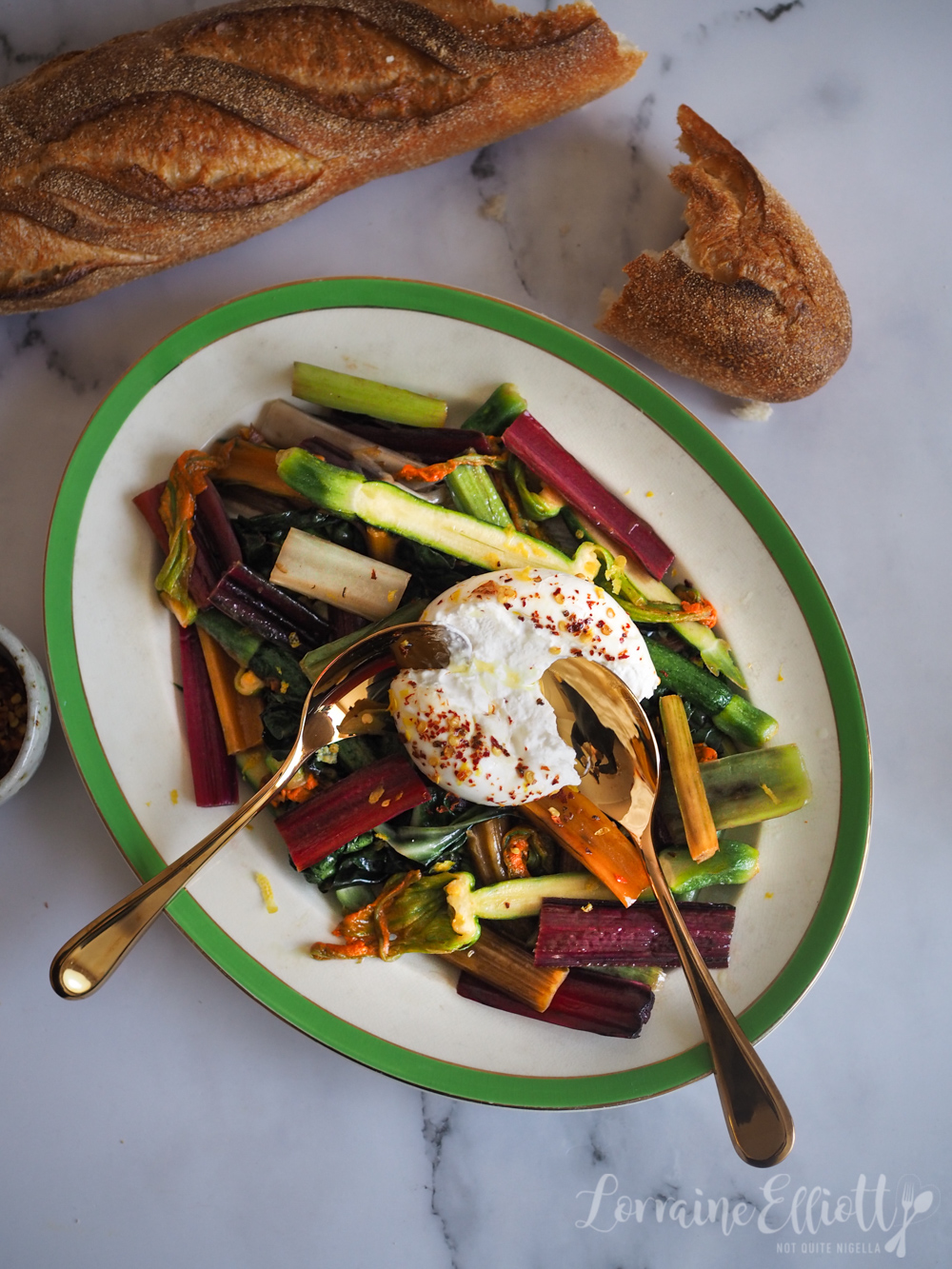