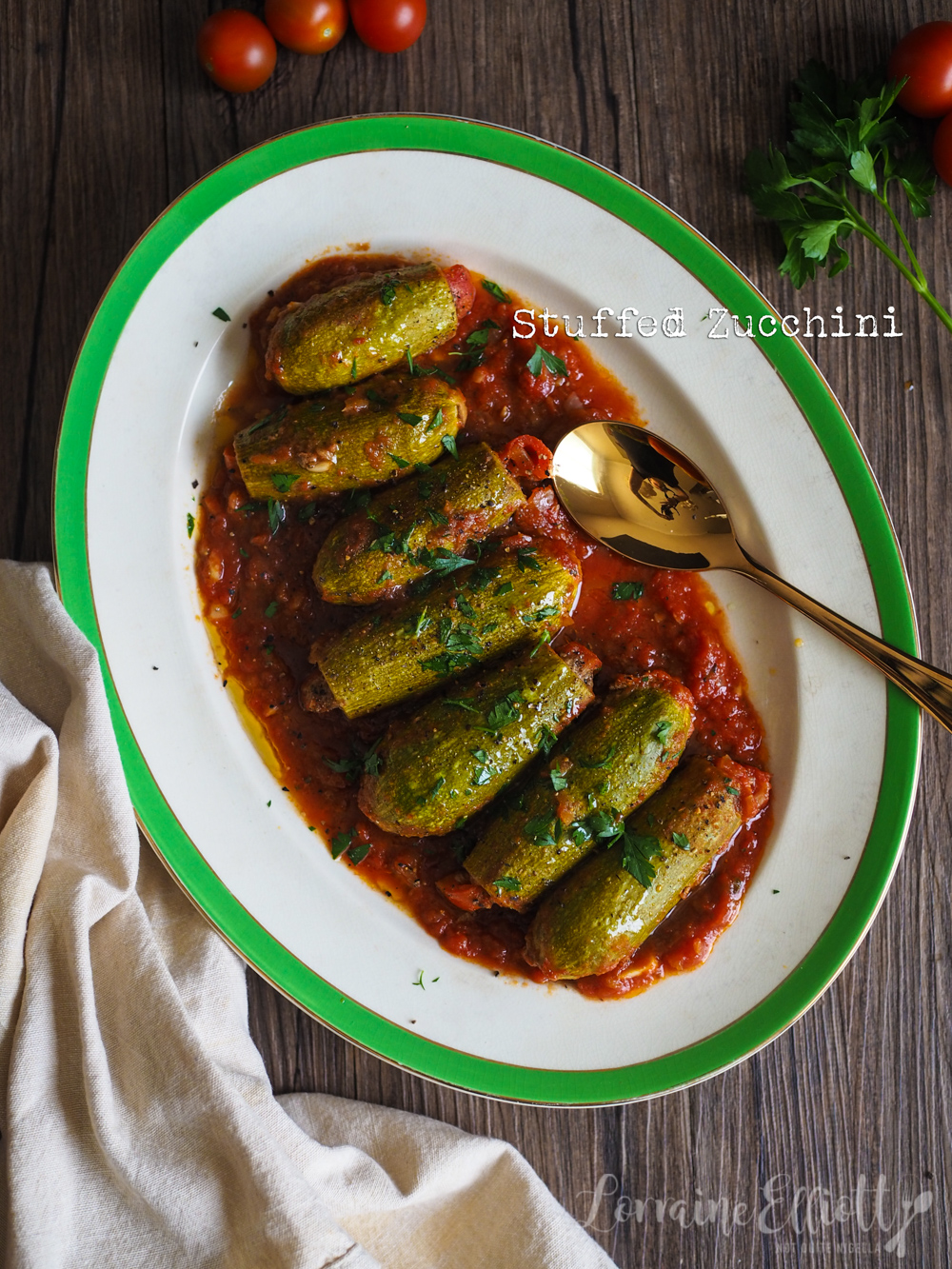 Lebanese stuffed zucchini or Kousa Mahshi is an absolutely delicious stuffed vegetable dish for when you have an abundance of zucchini. Shorter Lebanese zucchini are filled with an aromatic, tasty mixture of beef, rice and spices and they cook up in a delicious tomato based sauce!

Kousa Mahshi literally means stuffed squash or zucchini and is found across a range of countries from Lebanon, Egypt, Palestine, Iraq, Syria, Israel, Jordan, and Cyprus. It is commonly made with a beef mince but can also be made vegetarian. If beef is used, Kousa Mahshi is usually served hot but if it's vegetarian it can be served at room temperature. Kousa Mahshi is usually made with Lebanese zucchini or cousa squash. These are a smaller, shorter zucchini or courgette with a thin, striped pale green skin and a slightly sweeter flesh than larger green zucchini. They're ideal for stuffing because they're compact and easier to stuff. 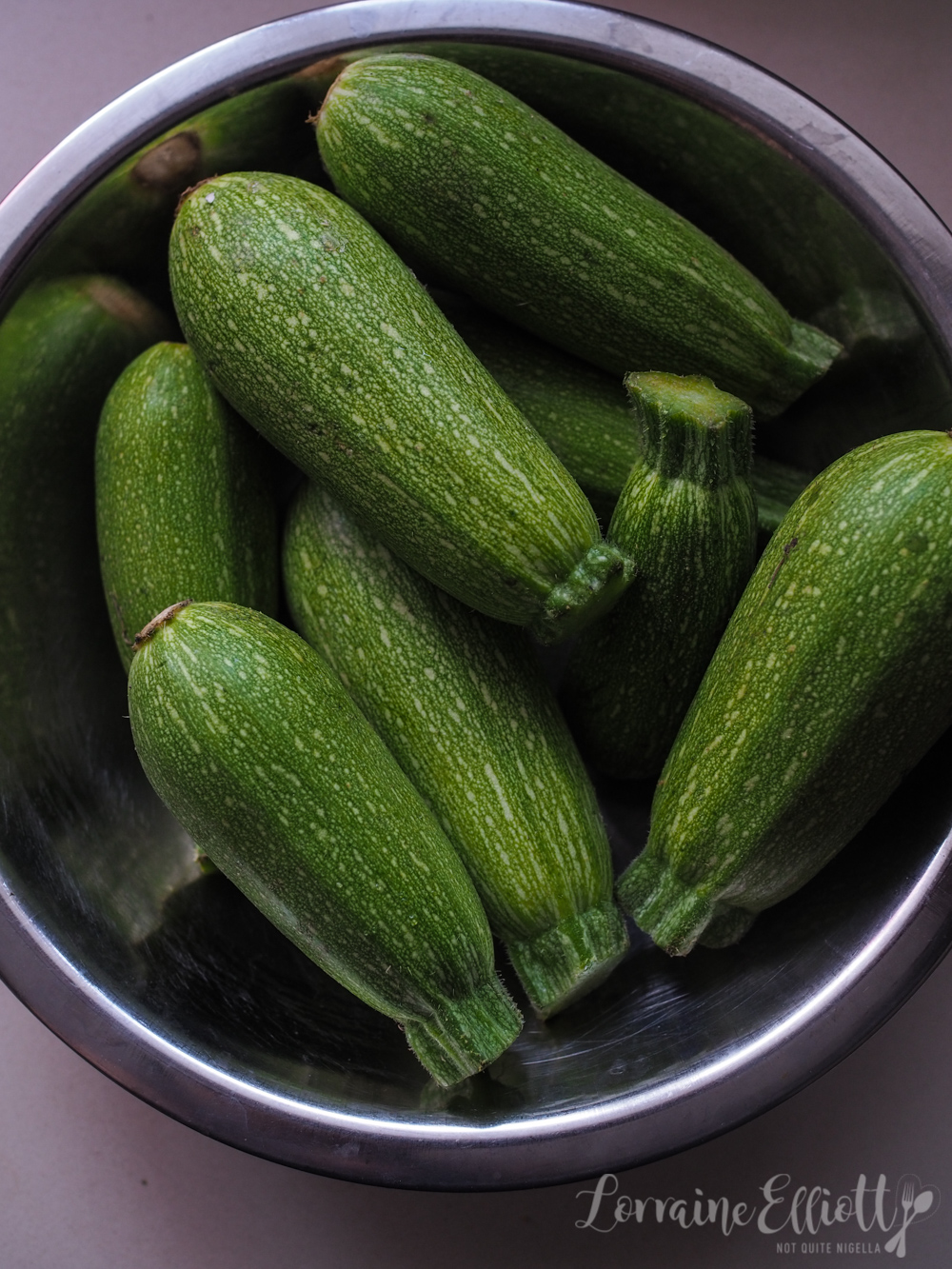 Don't have Lebanese zucchini? If you don't have access to Lebanese zucchini you can use regular zucchini and cut them in half. Then stuff the open ends with a piece of tomato to stop the filling from spilling out at either end. You can also stuff tomatoes, capsicums (peppers), potatoes, eggplant, pumpkin, sweet potato, mushrooms or other types of squash. I even stuffed some kohlrabi (just peel, halve and boil kohlrabi for 25 minutes until tender and then hollow out, stuff and cook)! 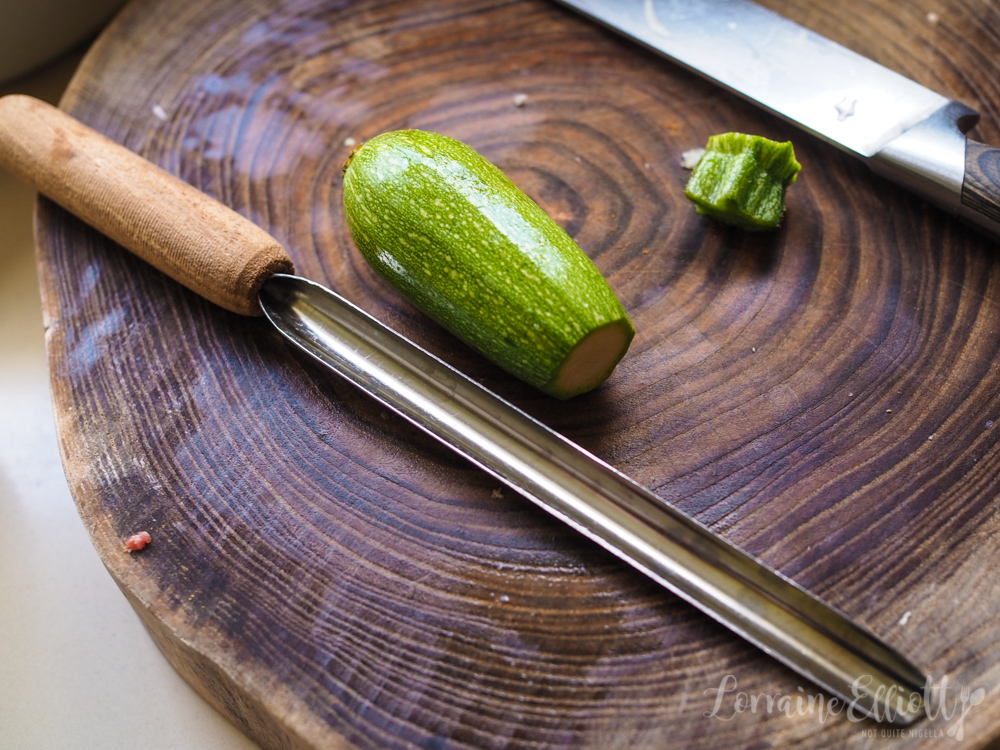 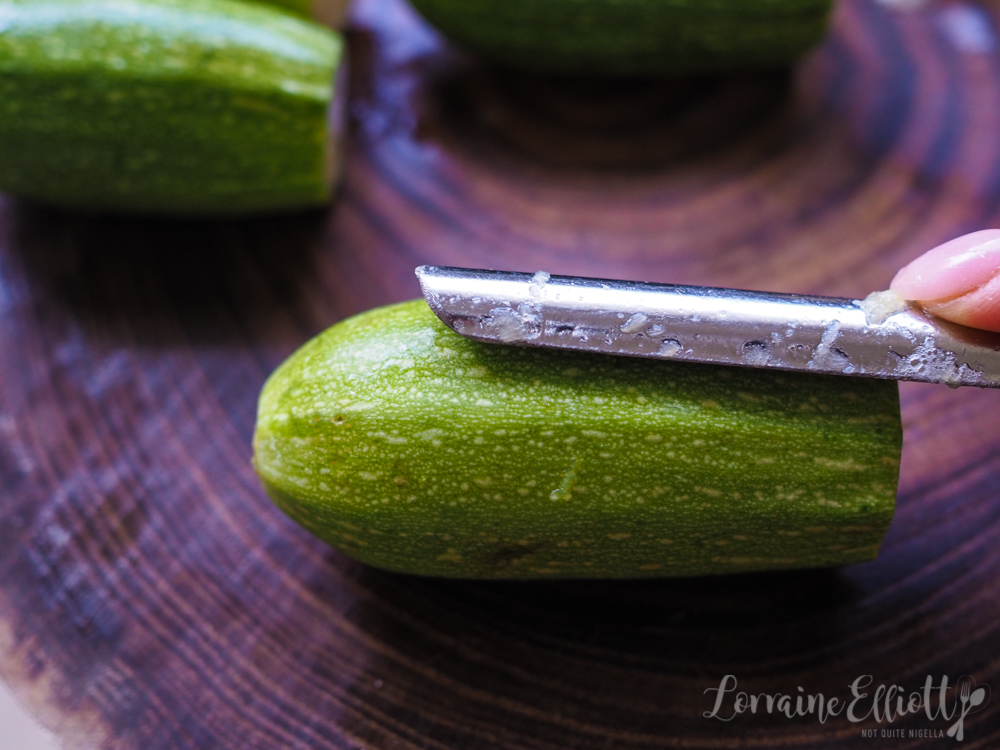 Marking with your finger the length of the zucchini 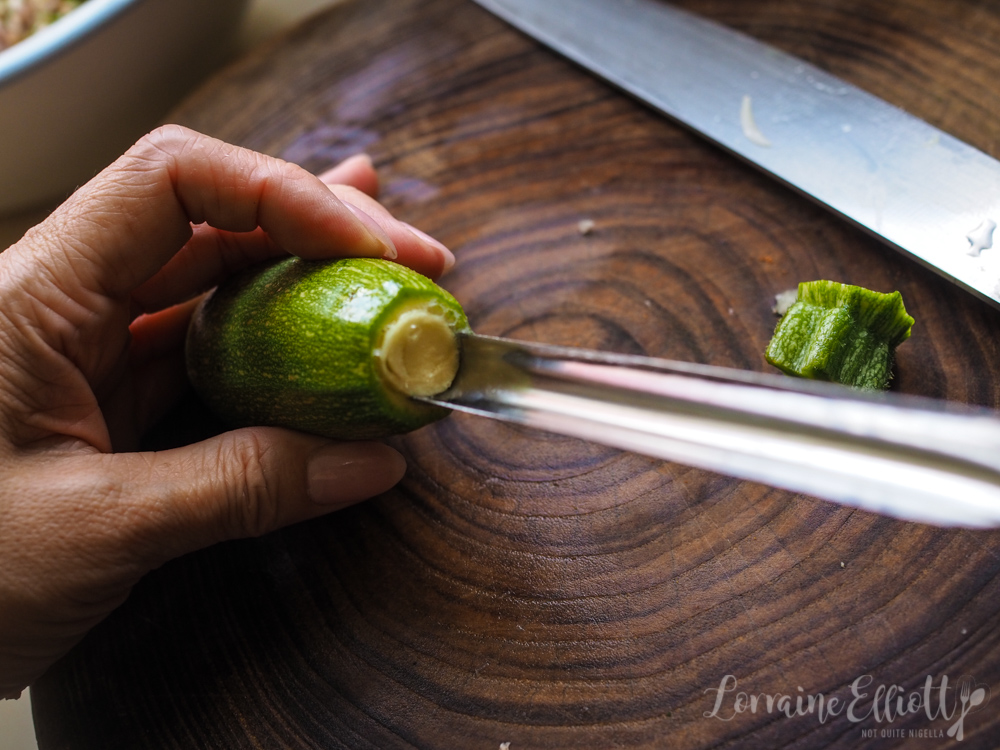 Inserting the manakra and starting with the top

To hollow out Lebanese zucchini I first mark how long the zucchini is using my finger (I stop at where the base curve starts) and gently push the manakra in a little at a time using my finger as a guide stopping so that I don't push the tool out the other hand. 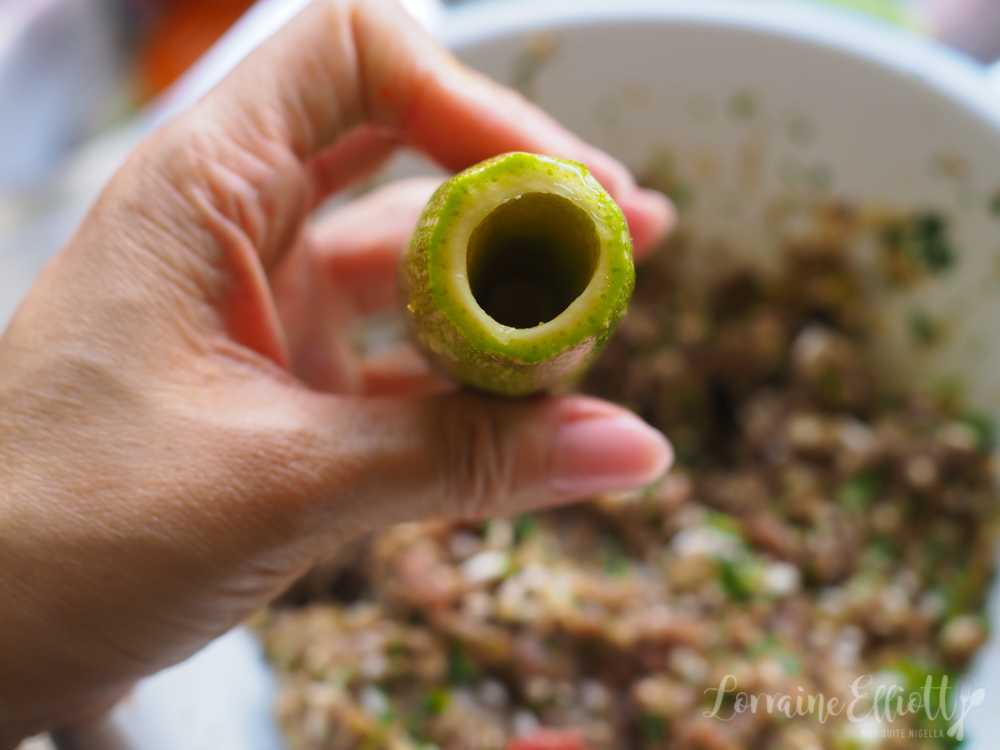 I pull out the main core of the zucchini and then go back in and try and scrape out as much of the filling especially towards the more bulbous base of the zucchini without breaking the sides of the zucchini. It's amazing how much you can scrape out and the centre of Lebanese zucchini is quite seedy so it's quite easy. You can use the zucchini centre in soups, stews or curries. I used it in a spanakopita filling. 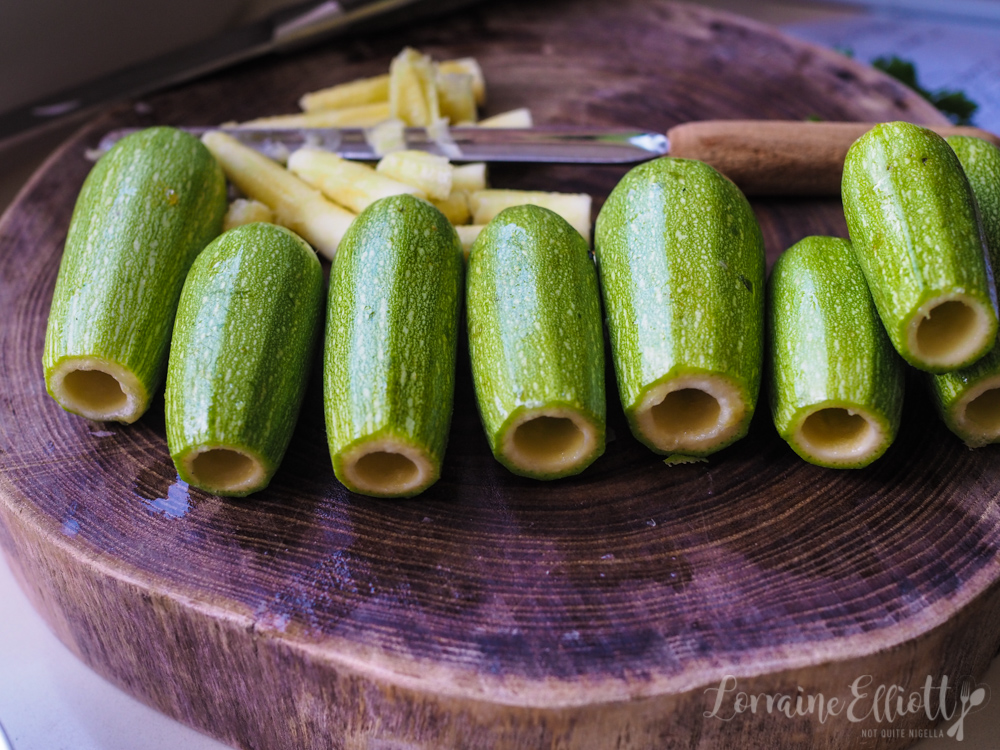 Which rice to use with stuffed vegetables? Use raw, short grain rice to make kousa mahshi. It sticks together better than long grain rice so that you get a cohesive mixture. Before you use the raw rice, soak it for 30-45 minutes. This ensures that your rice cooks perfectly so that it isn't hard or soft. Some recipes call for the beef and rice mixture to be cooked beforehand but having it uncooked makes it easier to stuff and it doesn't overcook or dry out this way.

What to serve with Kousa Mahshi? I had intended to serve this with yogurt, garlic and dried mint but really it doesn't even need this and the lemon juice gives it a lovely sourness that it needs. I would say some bread to soak up that delicious sauce is all I would add. 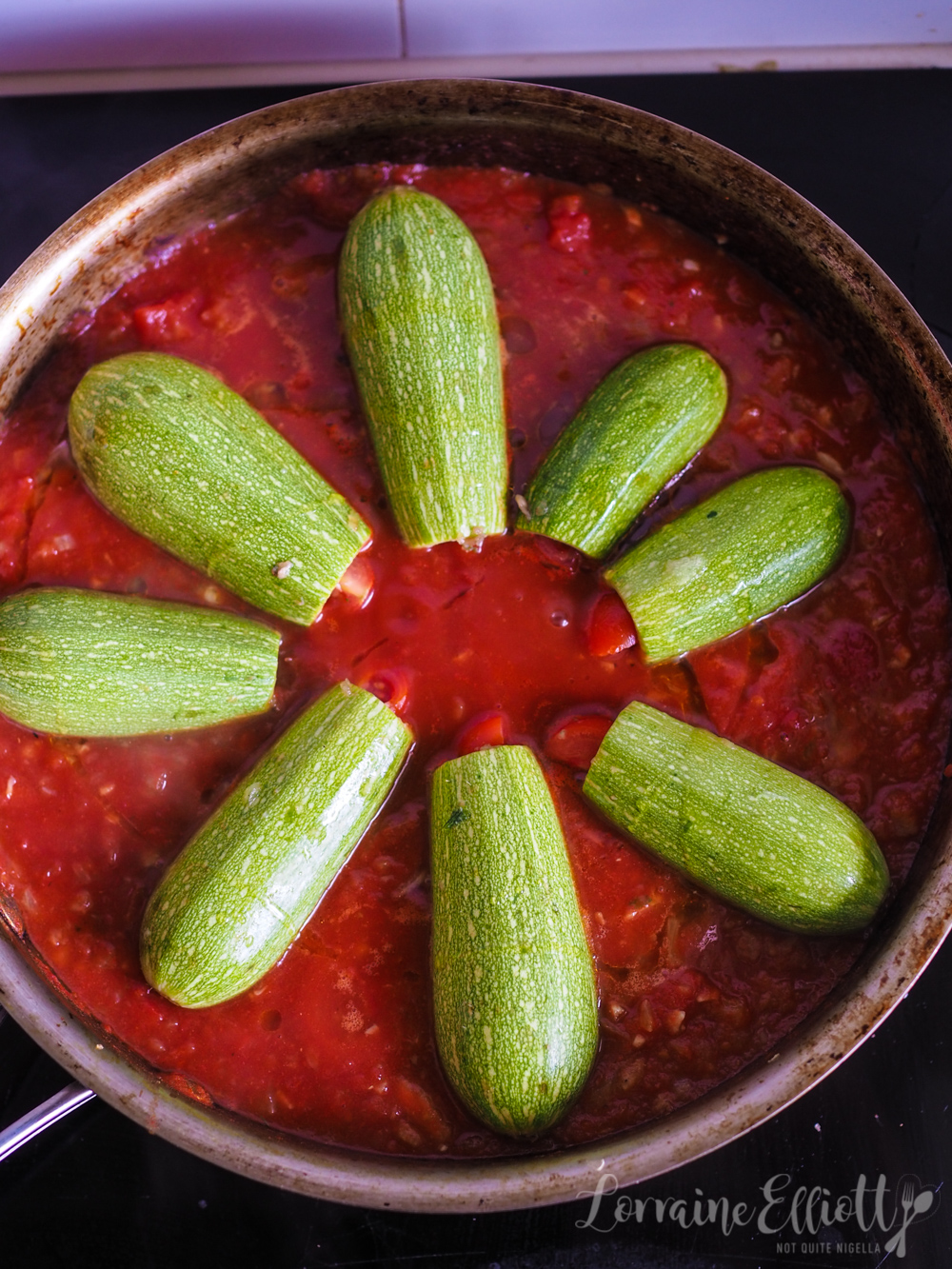 The only downfall of this is that it cooks for about an hour which is not a problem really because you do nothing to it and just let it do its thing. The only problem is when you have a little dog that is obsessed with food and serenades dishes. Teddy has a definite language and he makes different noises according to what he wants. When he's trying to retrieve his balls from under the furniture he uses a tone that is so distinctive that when we hear it from another room we often shout to one other "Can you get Teddy's ball?". Then there is his plaintive, mournful serenade for food on the kitchen counter or stove. Usually I'm in the kitchen so he knows not to come in but as this cooks by itself for an hour I was in another room and I could hear him serenading the food.

We call Teddy the comedian because he is always making us laugh. One night around midnight Mr NQN heard Teddy running around furiously. His feet tap on our floodboards like he is running along with stilettos so we always say that we can hear Teddy running in his "high heels". It's sometimes a worry when he goes from napping to a brisk run, usually it means that he needs to go outside to use the bathroom. 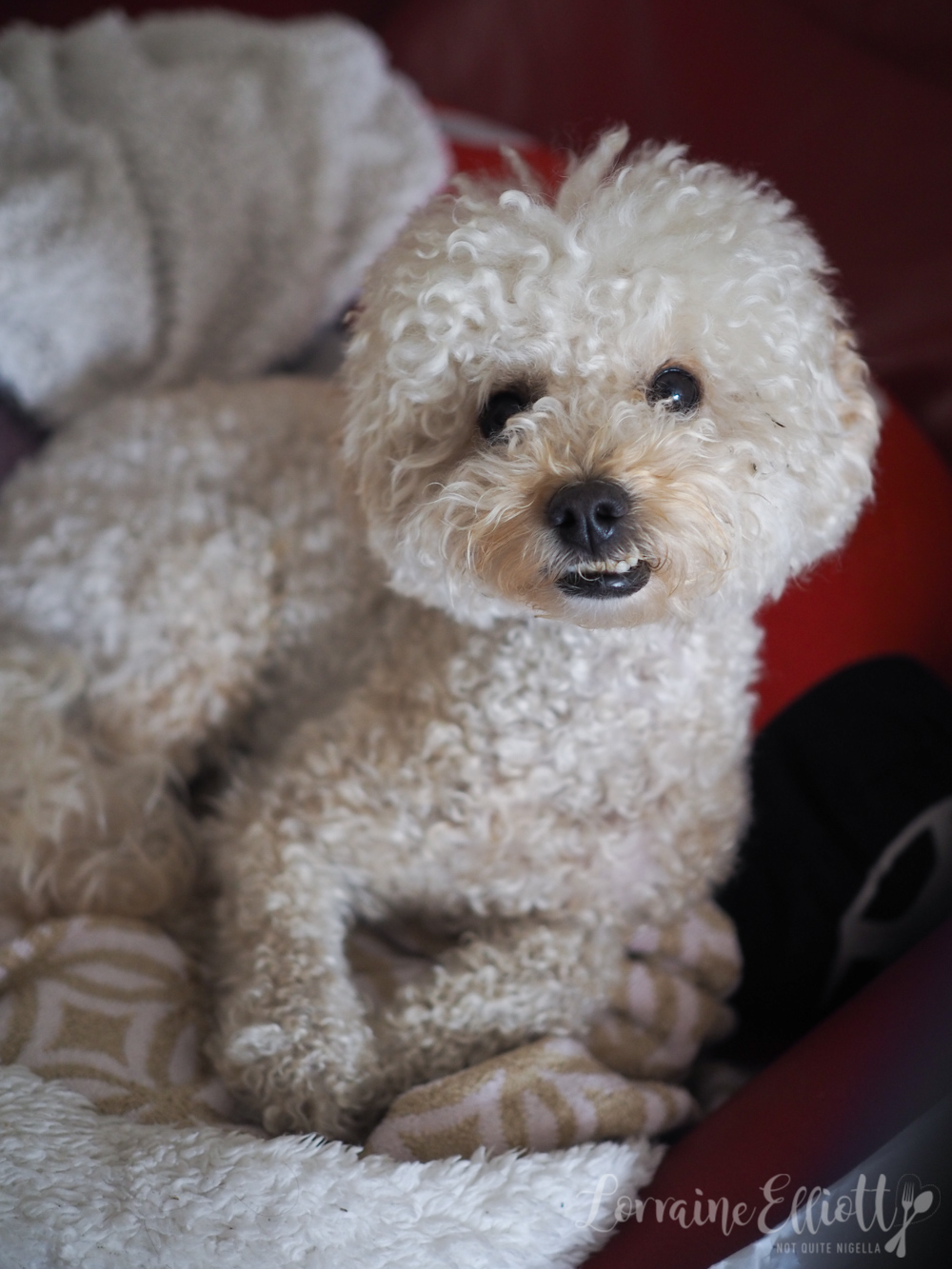 As the lights in most of the apartment were off because it was almost bed-time Mr NQN peered into the darkness where he saw Teddy shrouded by something very dark. His eyes widened as he wondered what it could be.

Teddy emerged into the light and somehow he had procured a pair of Mr NQN's black underpants and he was carrying them in his mouth. He ran up the bed with his prize and slept on them for the night. We still don't know what the rush was, maybe he suddenly remembered that it was his day to find some underpants!

So tell me Dear Reader, do you often make stuffed vegetables? Do you have a favourite vegetable to stuff? 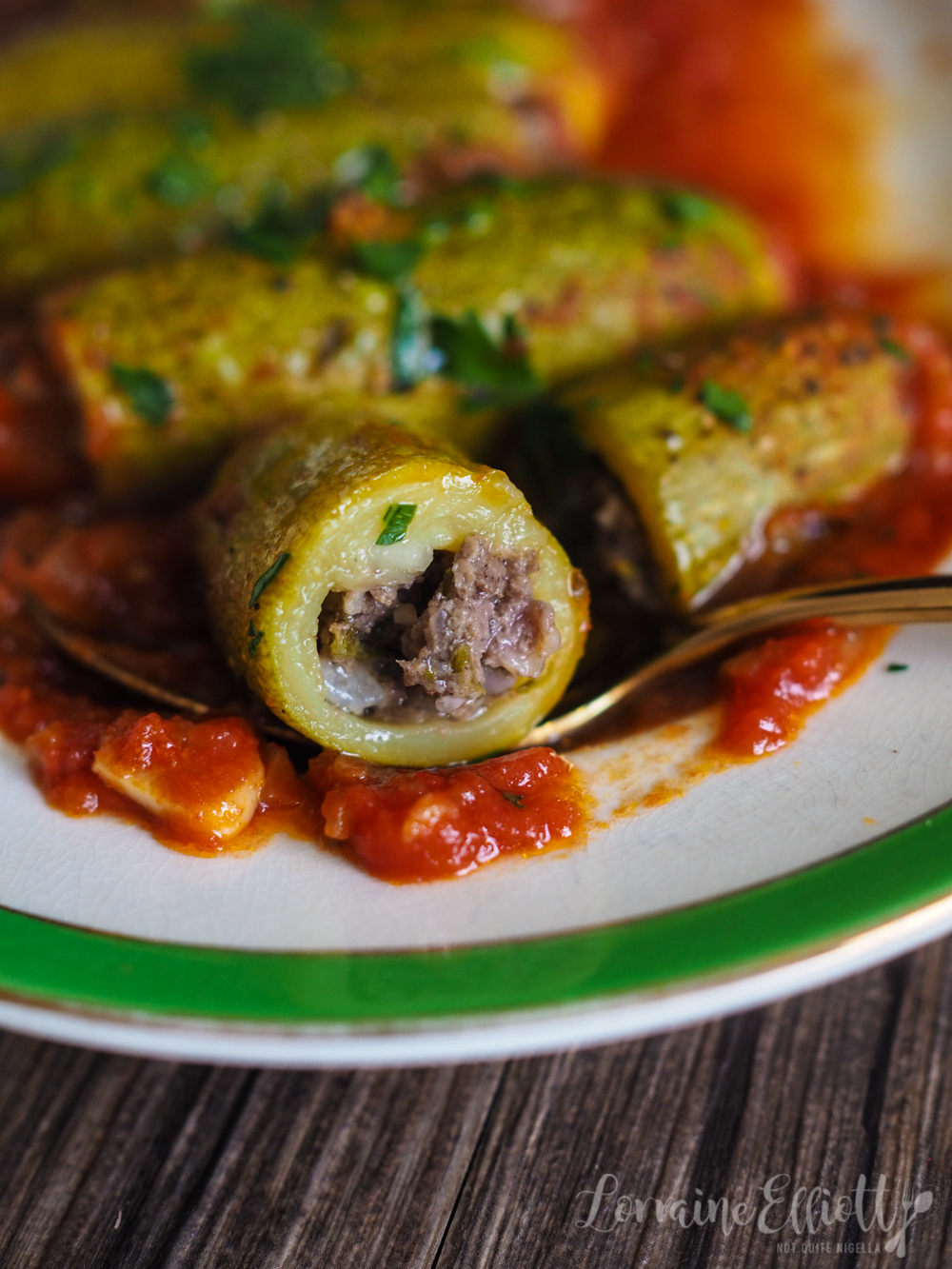 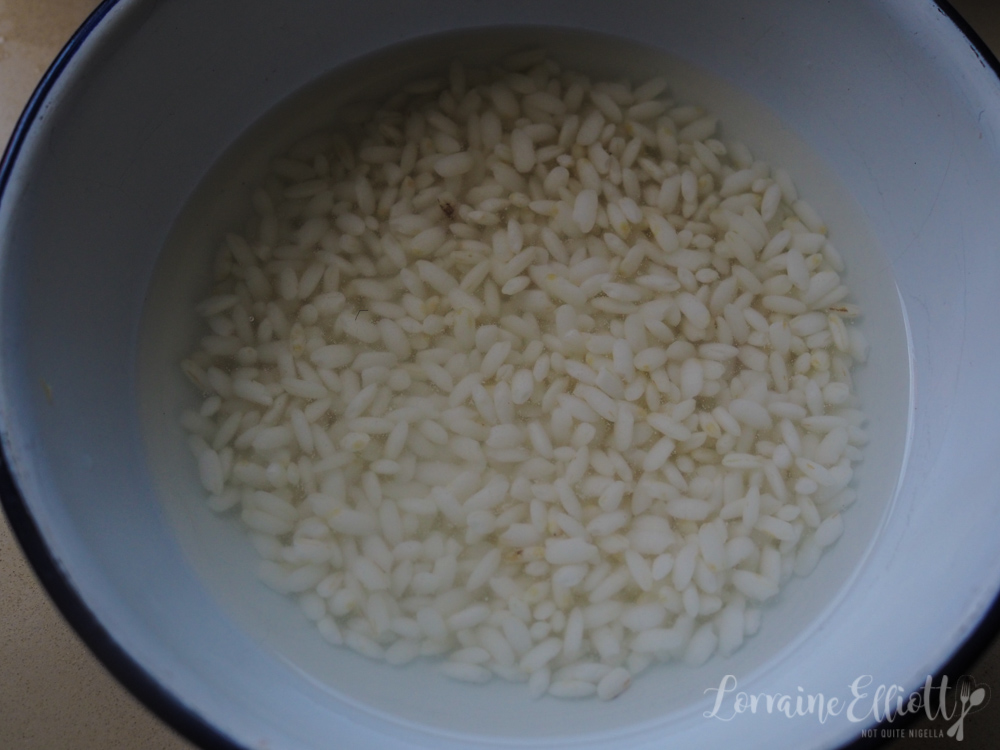 Step 1 - Mix the soaked and drained rice, beef mince, onion, garlic, herbs, baharat and salt together in a bowl. Use a manakra to hollow out the zucchini (see instructions above). Try to hollow them out as much as possible without breaking the sides as they'll be tastier with more filling. Fill the zucchini with the rice and meat filling making sure to push down on it so that it's compact. Fill the zucchini 3/4 of the way and then stuff a quarter cherry tomato in the end to stop the filling from spilling out. Repeat with the remaining zucchini. 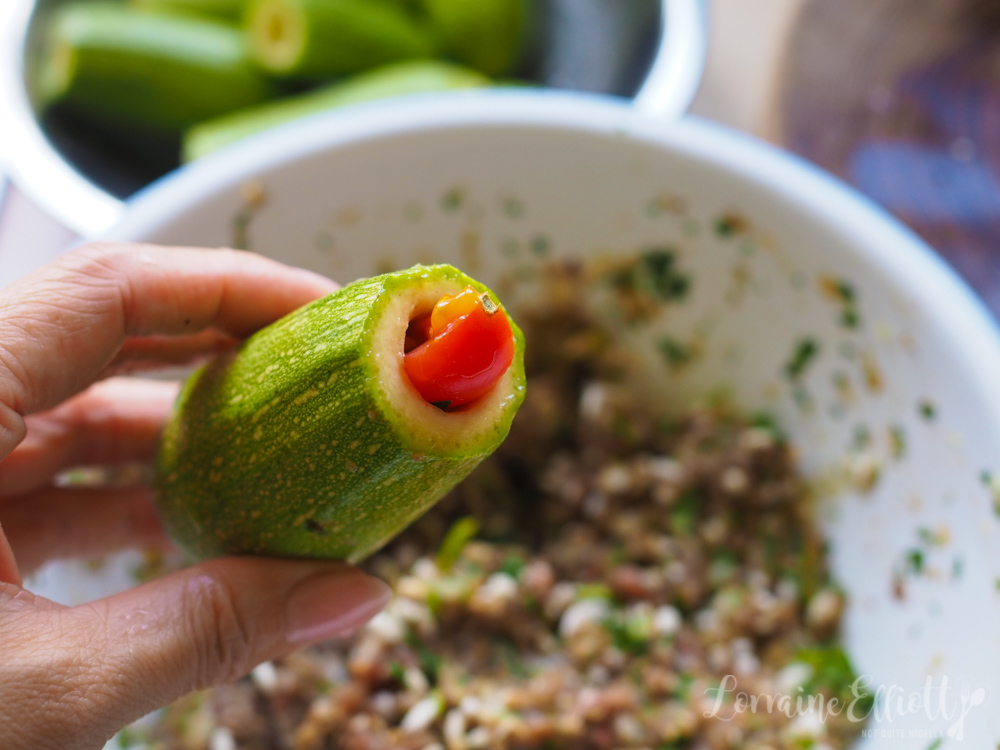 Stuffing the end with tomato

Step 2 - Then make the sauce. Fry the onion in the oil until softened. Add the garlic and fry for a minute. Then add the tomatoes, beef stock, tomato paste and sugar, salt and pepper. Taste for seasoning adding more if needed. Place the zucchini in the pan and cover with a plate (to weigh them down, we want them cooking in the sauce). Place the lid on and cook on medium heat (4 out of 10) for 1 hour. Drizzle with lemon juice and serve. 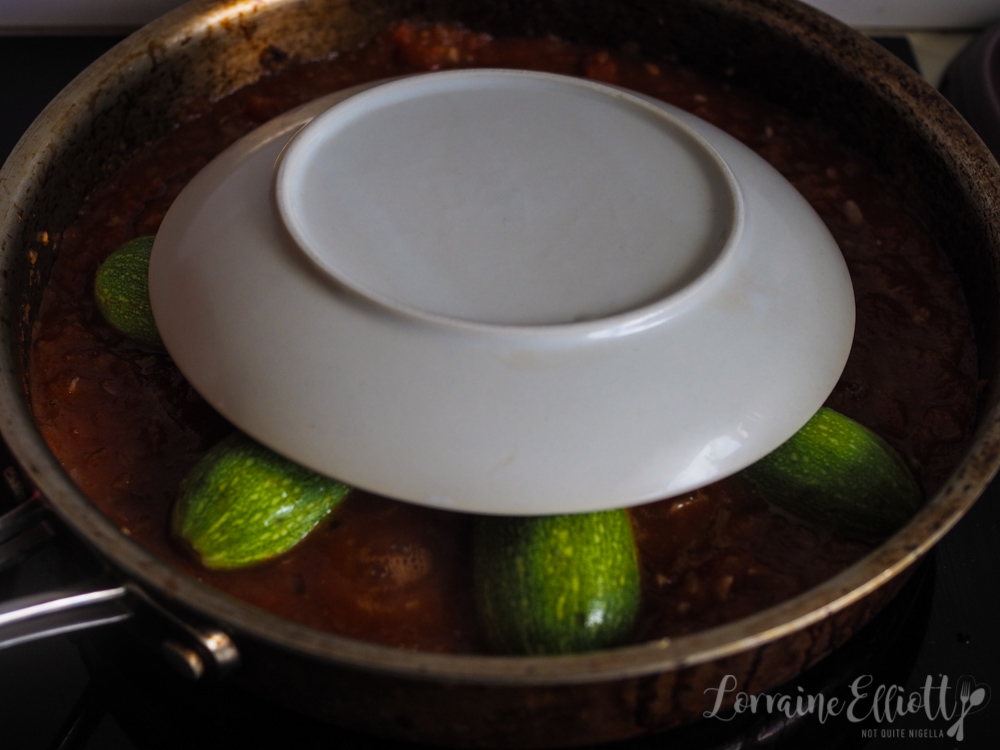 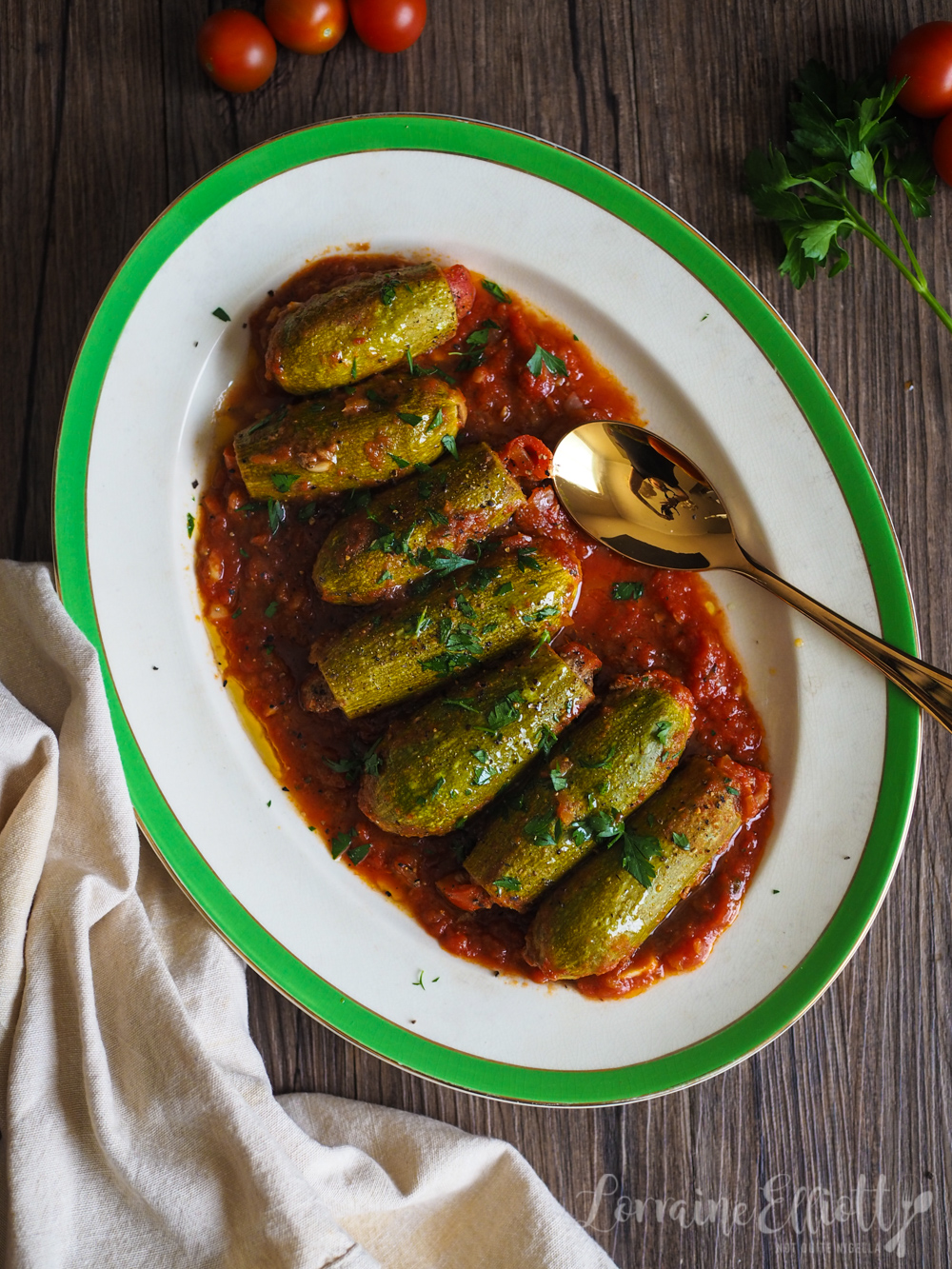