My Mother's Cousin is the phenomenally popular pizza restaurant in Bexley North. The queues stretch out down the street with people waiting for a table in the New York diner style restaurant. On the menu are pizzas, shakes and hot wings. So what are the pizzas like and what is the one ingredient that you will never see on their pizzas?

"Welcome to the fanciest restaurant in the world!" says the man sliding paper plates across the table and bringing us salad and wings. We are at My Mother’s Cousin restaurant in Bexley North. Rumour has it that the pizza game is strong here and nothing piques my interest quite as much as a new pizza place. Along with pizza there’s also a mix of wings on the menu to along with house-made lemonade and shakes. 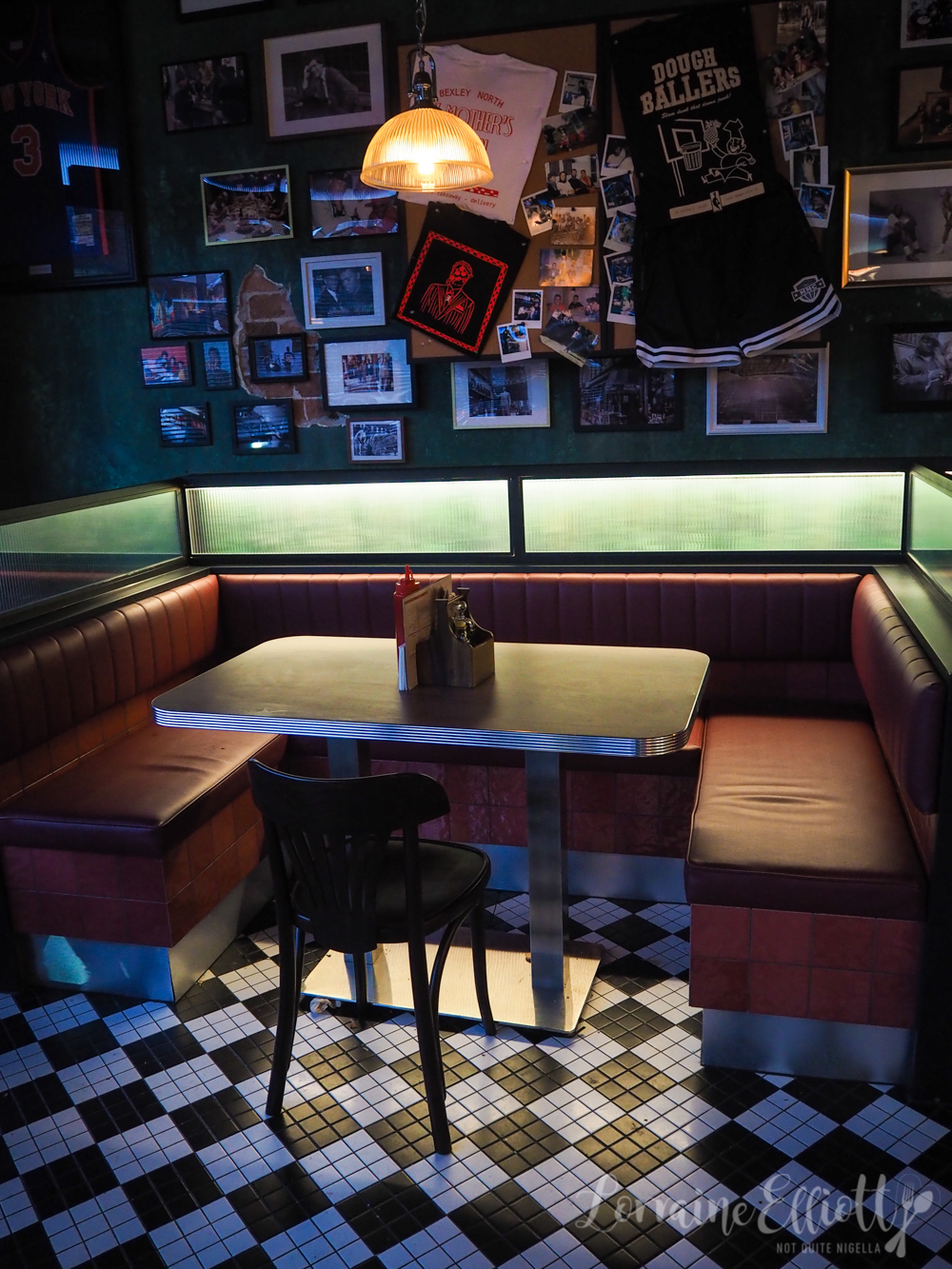 The three owners of My Mother's Cousin are sister and brother team Amani Rachid and Huss Rachid and their long time friend Sal Senan. They have a history with baked goods having owned Nineteen 43, a Lebanese bakery in Rockdale selling manoush pizzas and kaak. The inside of My Mother's Cousin isn’t huge although there are some outdoor seats and it is could be at home in Newtown such is the diner style decor. The trio designed the interior of the eatery along with a design studio with the aim to create a modern take on an old school Italian/American diner with vinyl upholstered booths with fluted glass panels. They consider themselves a fancy takeaway shop with a dine in element rather than a full service restaurant. 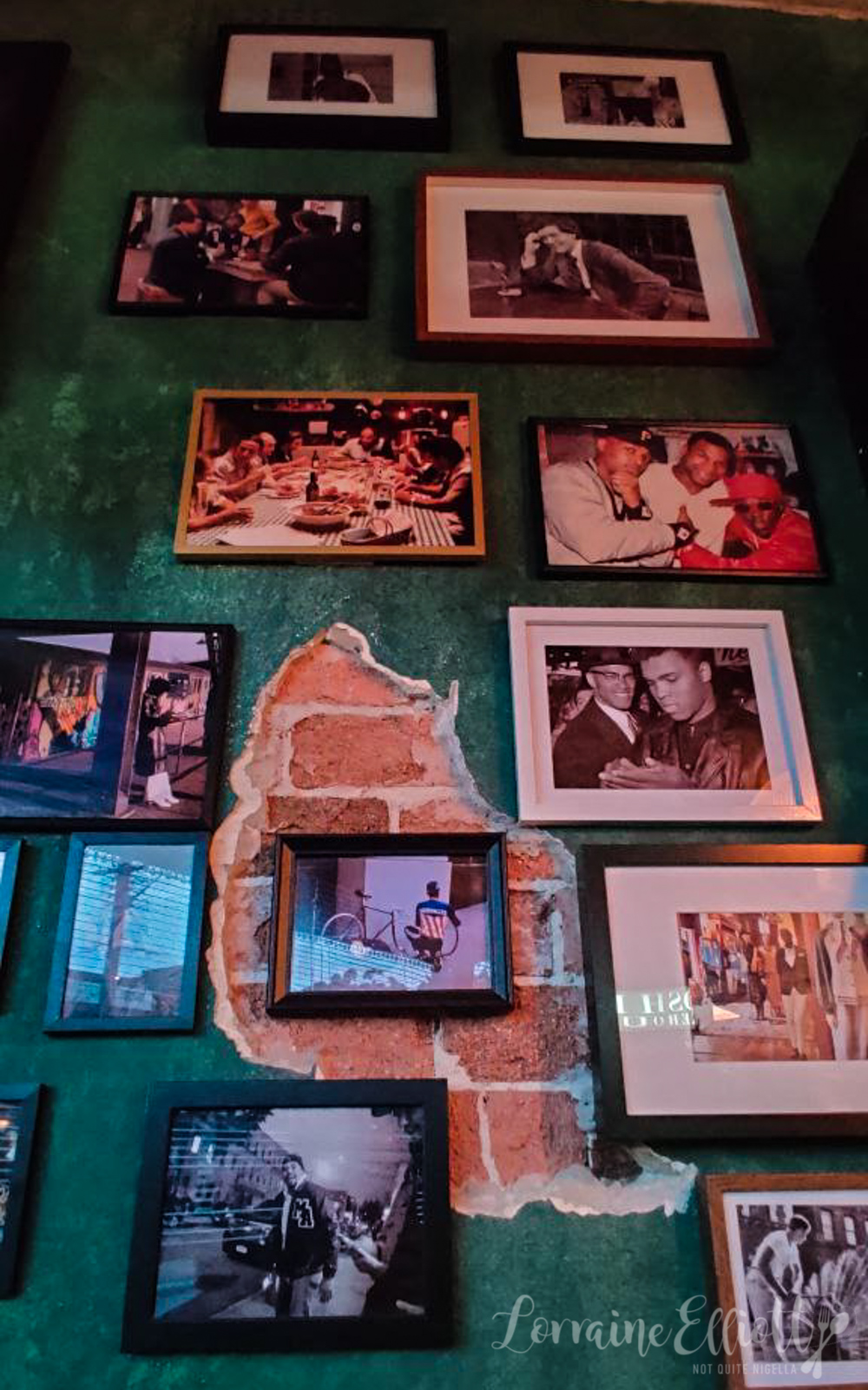 I’m with Valentina, Pete, Katie and Mr NQN this Saturday night. Valentina and her family live closer so they’ve arrived just after 7 o’clock and put our names down for a table. There are no bookings at My Mother’s Cousin and it’s strictly walk-in only. This means that there’s a big queue outside waiting for a table and it also means that plenty of people are picking up takeaway too.

At around 7.45pm we slide into our booth that seats 6 people. There is a menu on the table as well as disposable cutlery, sauces and napkins. Ordering is done at the counter and you can pay then or at the end of the meal. Service is friendly and they are clearly busy but take the time to make some recommendations. 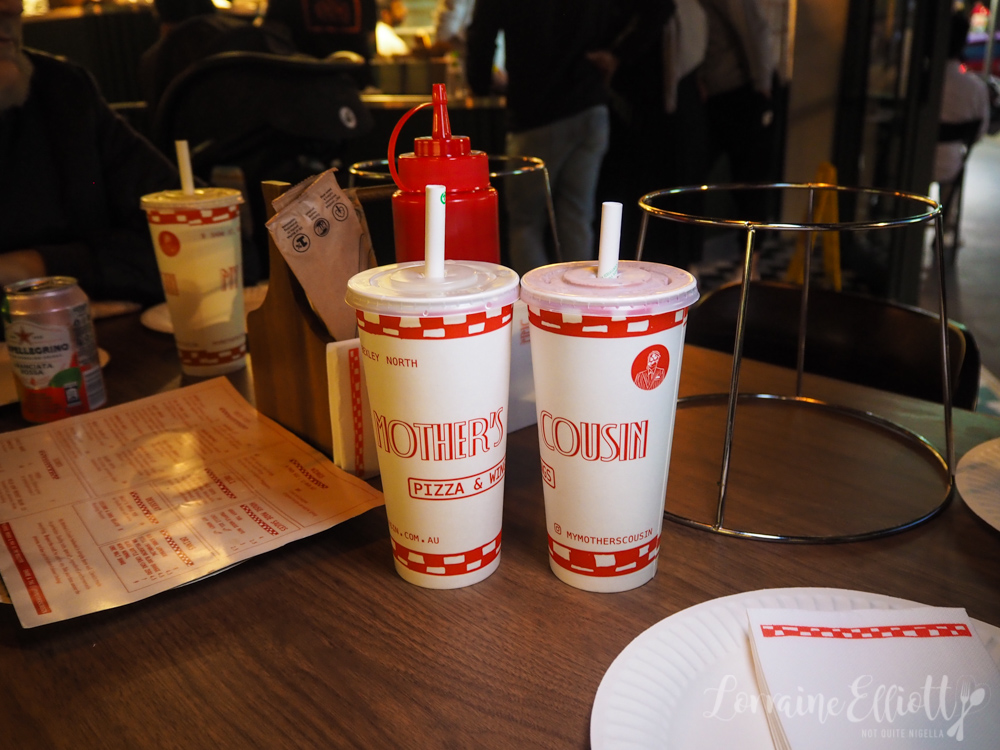 The wings and the drinks arrive first. The lemonade is fantastic – it's sweet but with the perfect touch of sourness to it too. Mr NQN's chocolate shake is an absolute winner too with just enough thickness in it so that it isn't too solid but has body to it and there's a little extra flavour from the malt. 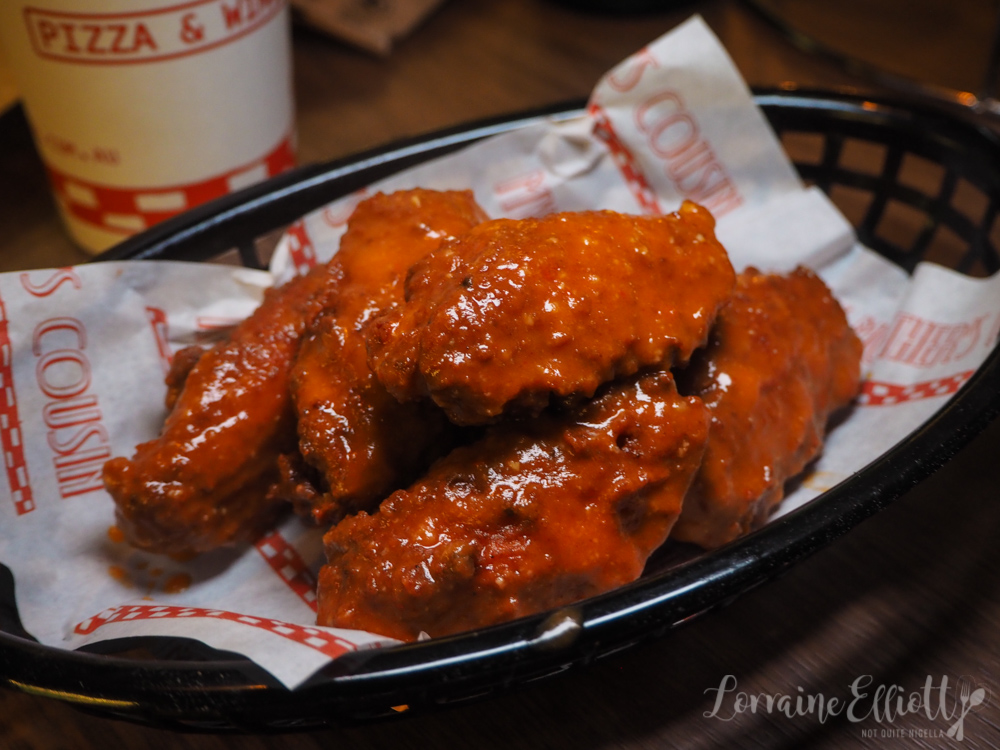 There are four flavours of the chicken wings, two wet and two dry and we ordered one wet and one dry. The wet Phil's hot sauce wings are good and have a thicker crust than your typical flour dusted deep-fried hot wings. This makes them crunchier and saucier as the coating soaks up the hot sauce nicely. But the real winner are the lime and black pepper wings. They’re so addictive with the hit of sour lime and black pepper and a crunchy carapace. I considered getting another half dozen to take home to have the next day (or at midnight). 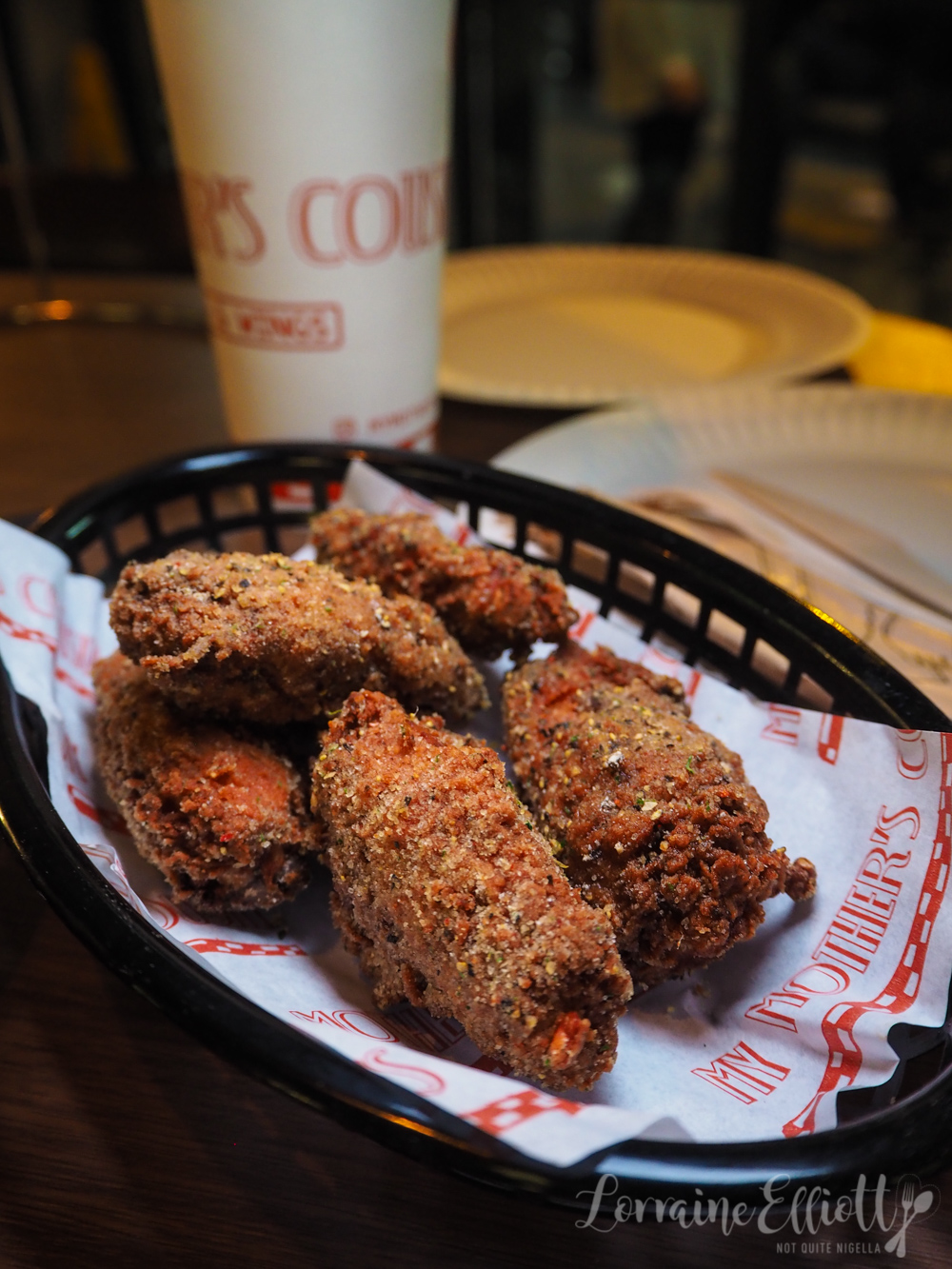 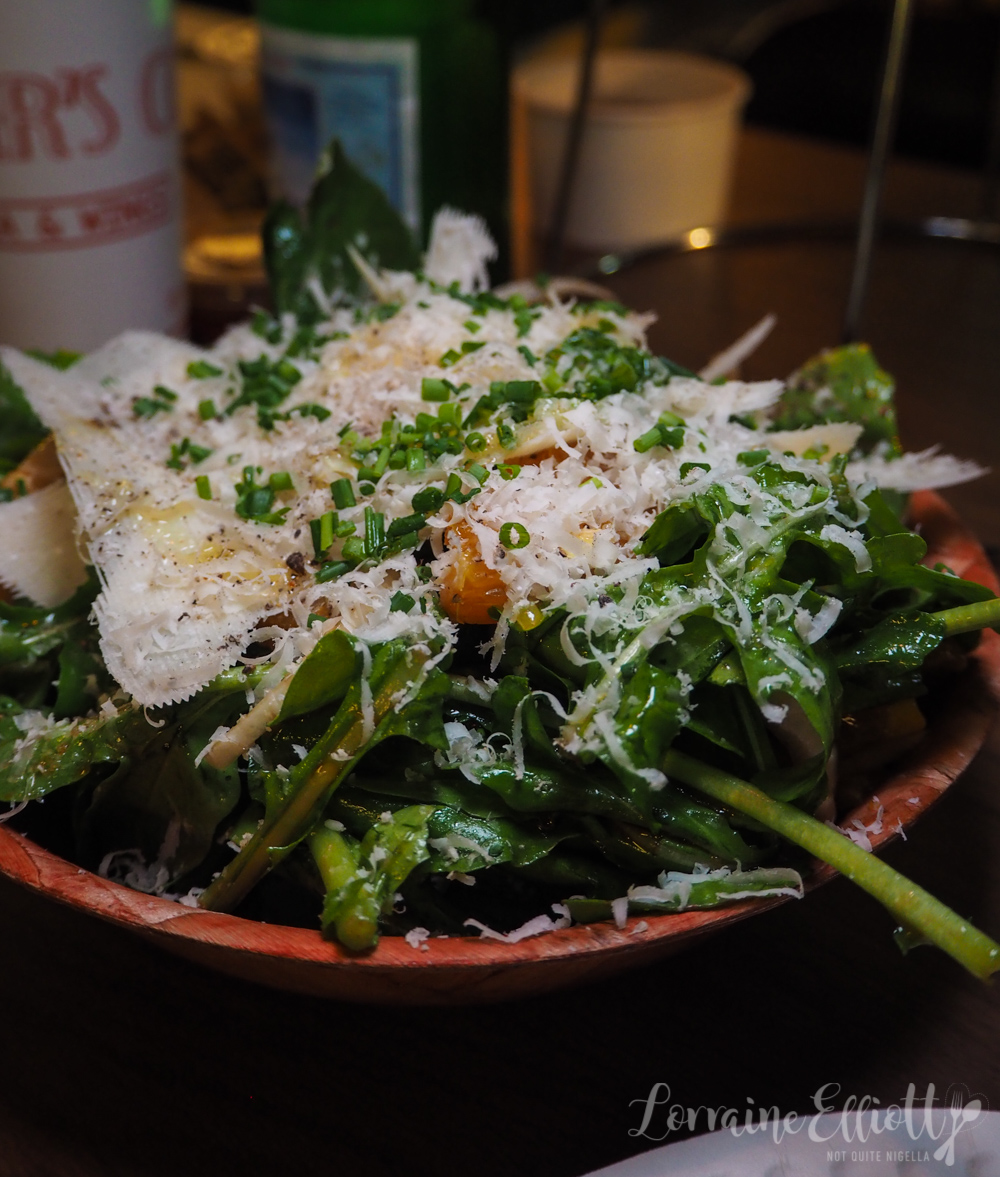 There is a one salad on the menu made of slices of orange, fennel, pecorino, chives and rocket with pomegranate dressing. It is a little difficult to eat with disposable forks and knives on a paper plate although it's a nice, refreshing salad to go with the pizzas.

The pizzas arrive next along with the sauces. I'm all about sauces and there are 5 available and we tried all of them but the regular mayo. The hot honey ($2) is an essential as is the chilli oil ($1.50). The truffle mayo ($1.50) is good for the crusts or fries and the gravy ($4) is great for fries. 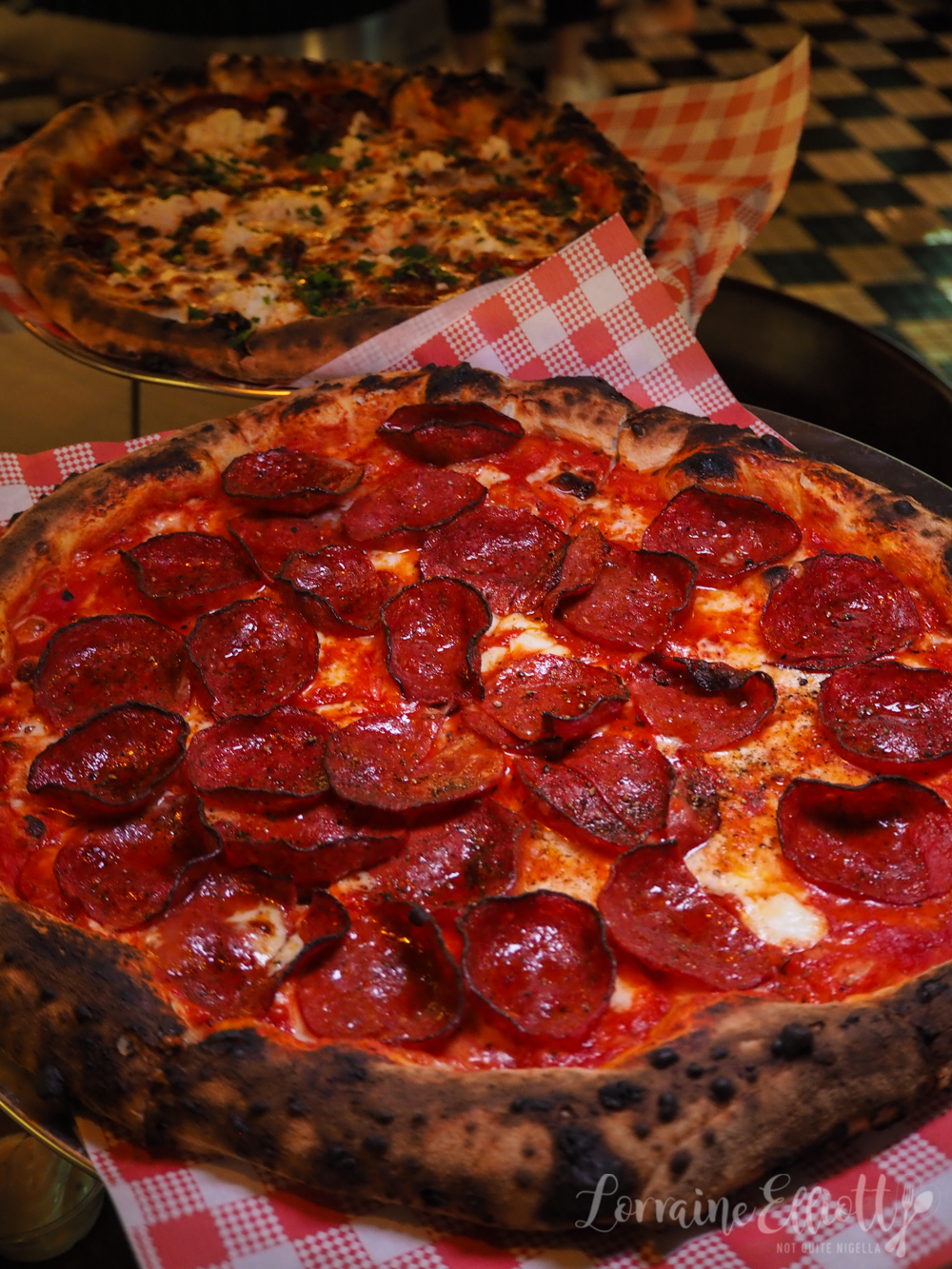 The OG Roni is Big Daddy of pizzas at 15 inches in diameter (the rest are 13 inches). The classic pepperoni pizza is delicious with plenty of pepperoni, fior di latte, tomato, basil and parmigiano reggiano. "We don't believe there is a real rule to pizza, everyone does their own thing and this is our interpretation of what a good pizza is. In regards to toppings, we didn't want to reinvent the wheel and wanted to keep it classic using the highest quality ingredients and focusing on flavour. We also believe pineapple doesn't belong on pizza haha," says Sal and Amani. Yup there is no pineapple on any pizzas on the menu. 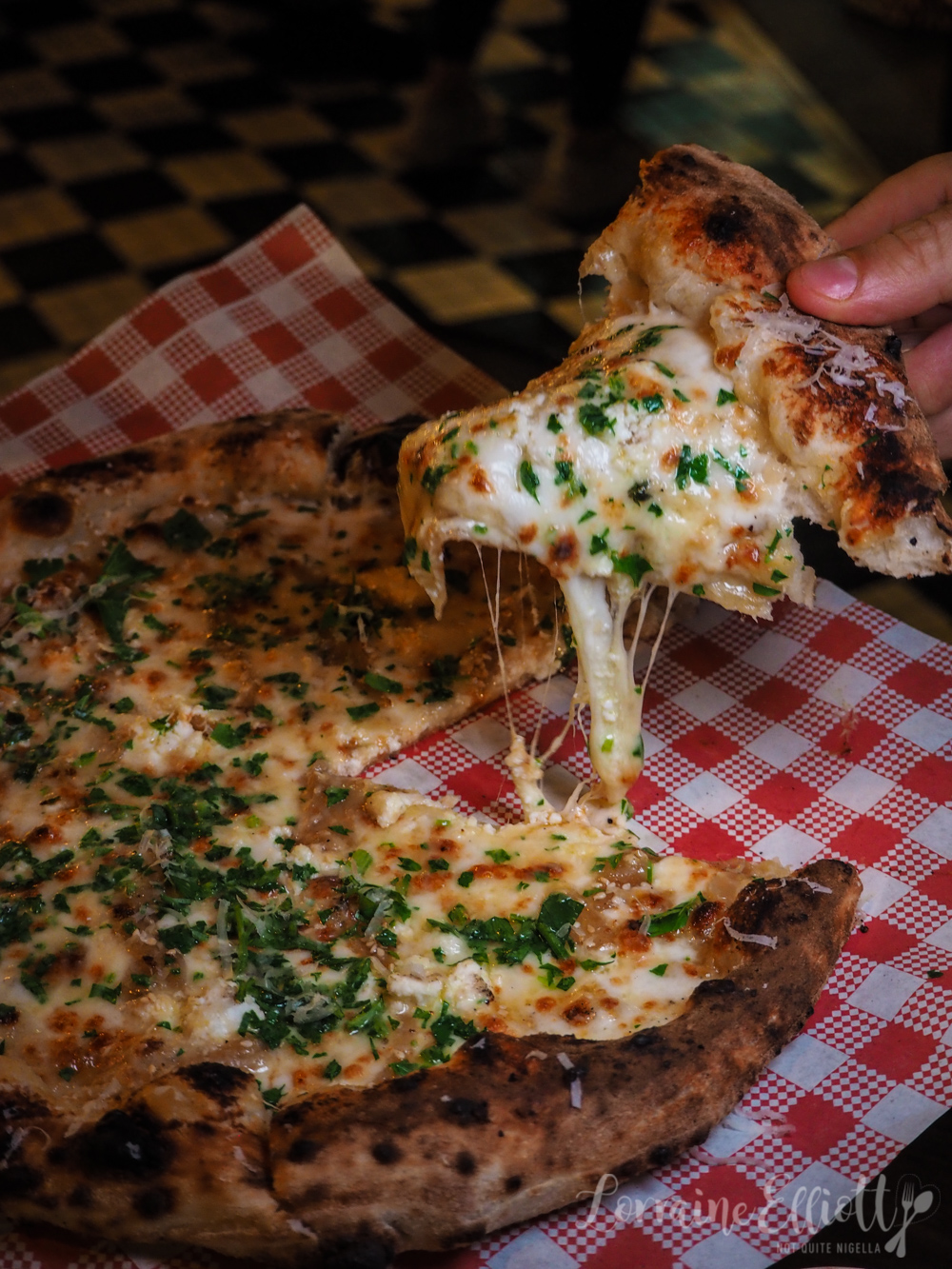 I usually eschew white pizzas because I love tomato but there’s plenty on top from garlic confit, smoked scarmorza cheese, pecorino romano, ricotta, caramelised onion, parsley and shallots. This needs a little bit of seasoning as it doesn't have the acidity and sweetness from the tomatoes. Katie and I drizzle a little of the delicious hot honey (hot as in spicy not as in temperature) and it’s perfection. 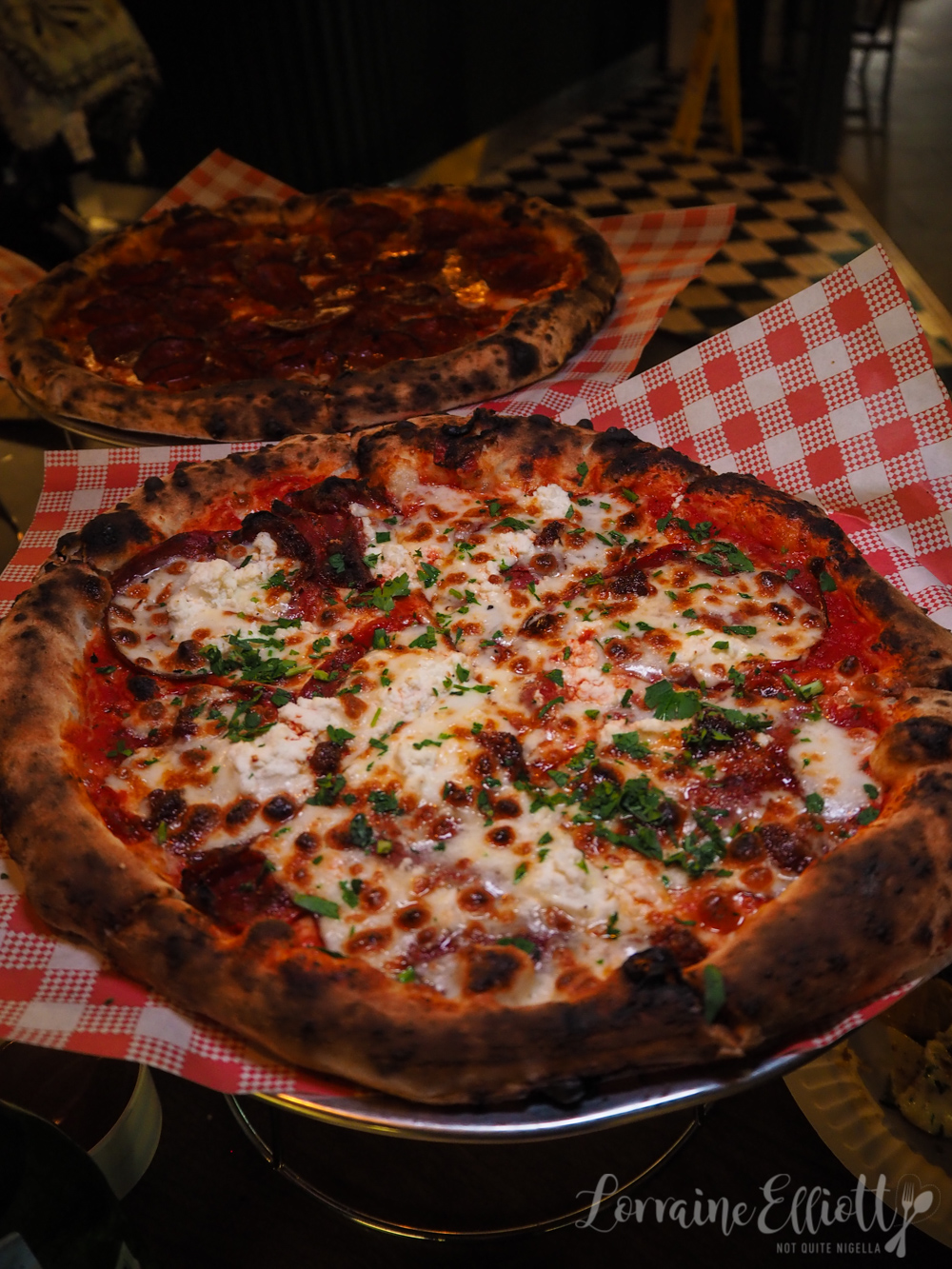 For my personal preference, pizzas have got to have spicy sausage so the Nduja and Salami pizza is my choice. This one has fior di latte, pomodoro, nduja, hot sopressa salami, fresh ricotta and this is actually everyone’s favourite pizza hitting all the right notes. The base and crusts it should be noted are excellent - blistered, puffy and appealingly chewy and worth eating in their own right with a very thin base. To make their bases they use Australian flour and ferment their dough for 48 hours. 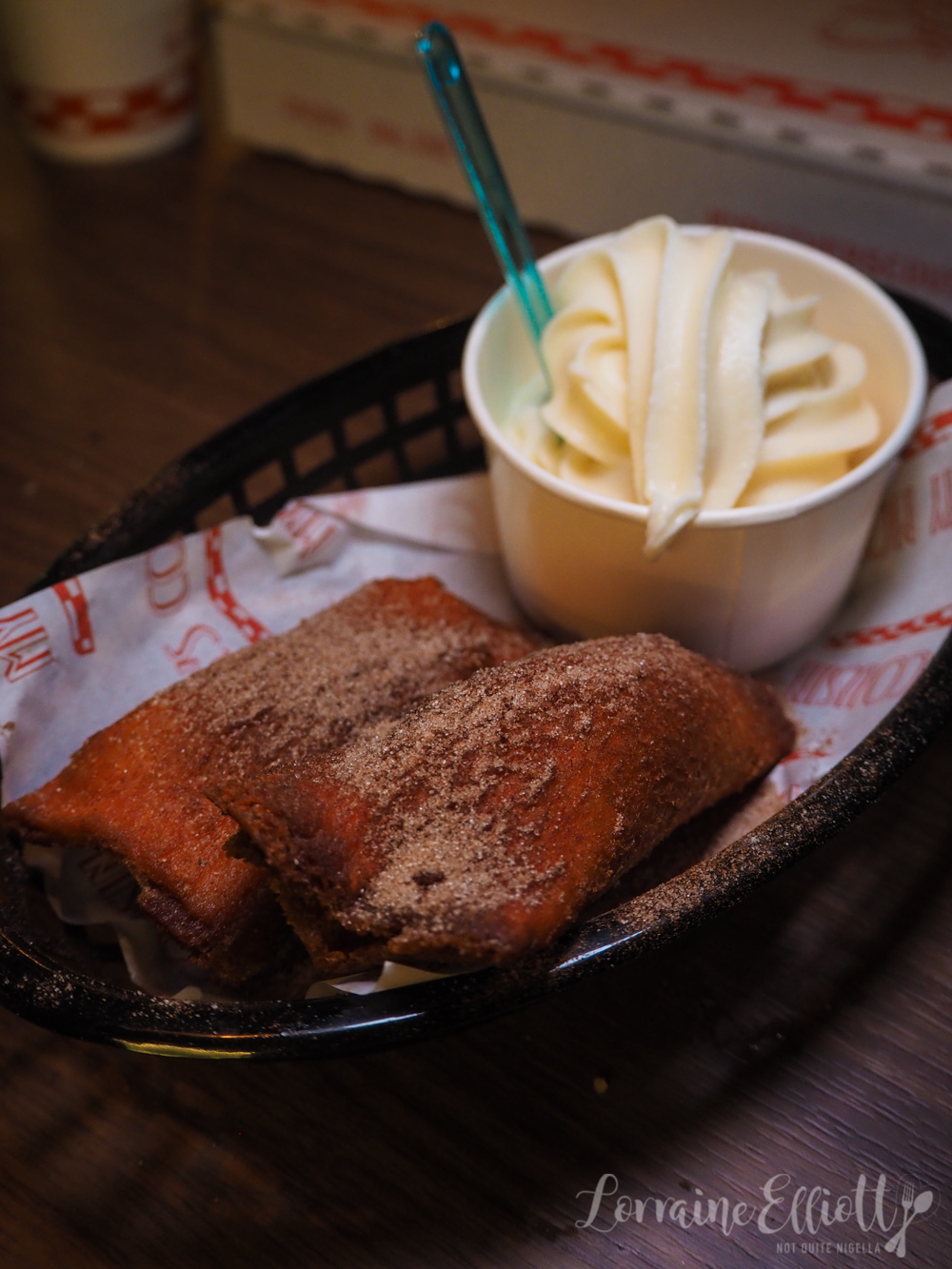 For dessert there’s vanilla ice cream or Sally’s apple pie (Sally being Huss and Amani's mother). Resembling a take on the McDonald’s apple pie this is crunchy and freshly deep fried with vanilla soft serve. And not a scrap goes back to the kitchen.

So tell me Dear Reader, what is your stance about pineapple on pizza? And what food piques your interest the most?