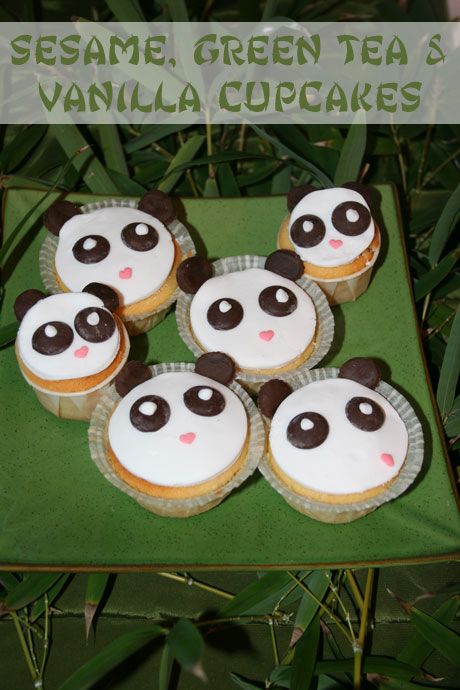 I know that mixing a Japanese flavour like green tea with the animal symbol of China is a little like mixing metaphors but I couldn't help myself after seeing a panda and bear cupcake in the Claire Crespo Hello Cupcakes book.

This is my entry for two competitions. I decided I would make two flavours of animals, both with a cupcake base of sesame and vanilla but I would make a Panda one filled with green tea creme patiserrie for La Petite Boulangette's Sugar High Friday Asian sweet invasion challenge and a Bear one filled with vanilla creme patisserie for the Master Baker April Vanilla challenge. 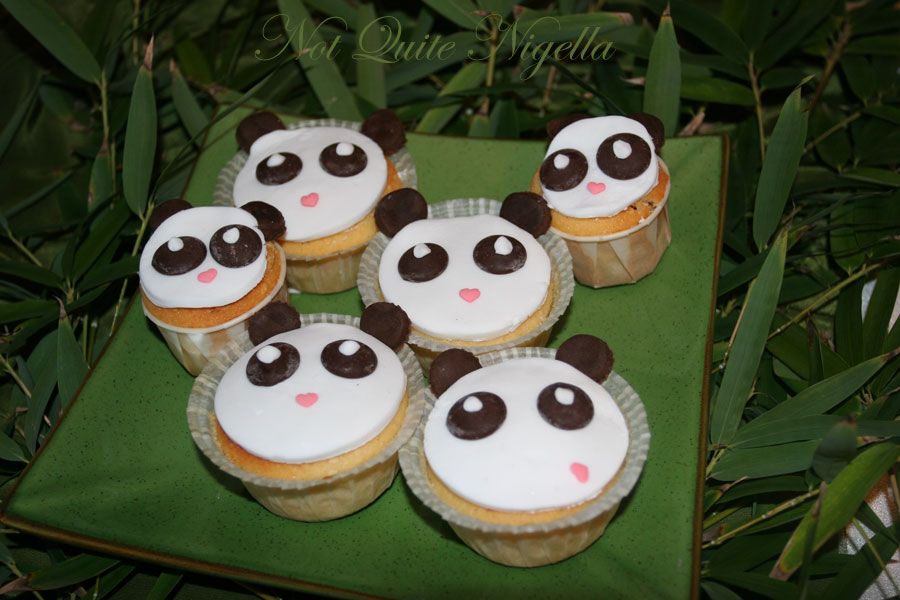 I confess I've never eaten tahini by itself before. When we went to buy some, my husband screwed his nose up at it having been fed tahini all of his life by his alternative parents. When I tried it I gasped, it was awful and bitter. I asked him if it was off and offered him a spoonful. He declined the spoonful and only dipped his pinky in. "Yep, that's right, that's tahini and that's why I can't stand it". I had to eat some passionfruit butter to get the awful bitter taste out of my mouth.

I had a lot of highfalutin ideas for decoration involving shards of sesame toffee but once I saw the pictures of the panda, undoubtedly a symbol of China, and thus true to the theme, I was sold. The cupcake wasn't particularly crunchy on the outside, if I were to do it again I'd add some sugar crystals and/or sesame seeds on the top before baking it. Still, my husband declared this his favourite cupcakes ever. Yes I know, he says this often but it's the thought that counts.

Makes 12-14 full sized cupcakes. I made 8 large and 8 mini cupcakes from this batter.

Step 3 - In a small bowl, combine the flours. Set aside.

Step 4 - In a large bowl, on the medium speed of an electric mixer, cream the butter until smooth. Add the sugar gradually and beat until fluffy, about 3 minutes. Add the eggs, 1 at a time, beating well after each addition. Add tahini and beat until just combined.

Step 5 - Add the dry ingredients in 3 parts, alternating with the milk and vanilla. With each addition, beat until the ingredients are incorporated but do not over beat. Add sesame seeds. Using a rubber spatula, scrape down the batter in the bowl to make sure the ingredients are well blended.

Step 6 - Pour batter into measuring jug and pour into liners, filling them about 3/4 full. Bake for 20 to 25 minutes, or until a cake tester inserted into the center of the cupcake comes out clean.

Step 7 - Cool the cupcakes in tins for 15 minutes. Remove from the tins and cool completely on a wire rack before icing.

Step 1 - To make the pastry cream, break the egg into a medium-sized mixing bowl, then add the egg yolk and sugar. Next, put the milk on to warm over a gentle heat while you whisk the eggs and sugar together until the mixture becomes thickened and creamy  about 1 minute with an electric hand whisk on the first speed. Then sift in the flour and whisk that in.

Step 2 - Now turn the heat up to bring the milk to boiling point and then whisk the milk into the egg mixture. After that return the whole lot to the pan and continue to whisk, this time with a balloon whisk, over a medium heat until the mixture becomes very thick  keep the whisk going all the time because the mixture can catch very easily if you don't. As soon as a bubble on the surface bursts, remove the sauce from the heat and quickly pour it into a bowl, then stir in the vanilla extract.

Step 3 - Divide the pastry into two bowls and add 1/2 teaspoon of green tea powder to one bowl and 1/2 teaspoon vanilla bean paste to the other and mix well to incorporate. Cover the pastry cream with clingfilm to prevent a skin forming, and leave it to get completely cold.

To decorate both pandas and bears:

Step 1 - Make the white fondant pieces first. Rill out fondant dusting surface with cornflour or icing sugar to prevent fondant sticking to surface or rolling pin. Use biscuit cutter roughly the same size as surface of the cupcake to make the "face" of the Panda cupcake. Then make eyes for the pandas and the bears as pictured. 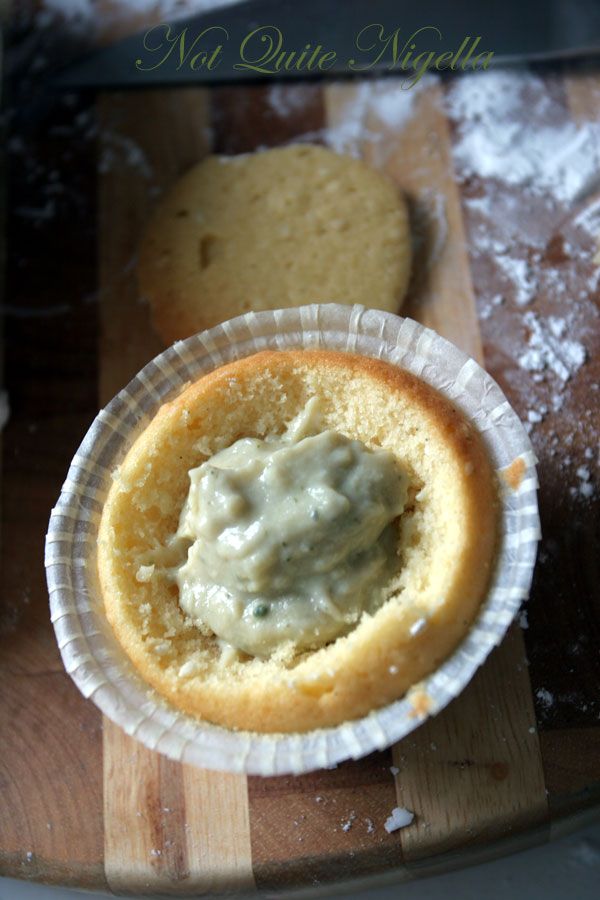 Step 1 - To assemble, cut out deep cone of cake from the centre using a sharp knife. As I wanted these to be like the custard filled Beard Papa Chouxs I dug quite deeply and almost towards the edge. You may have to "Dig" twice to get it as cavernous as possible. Be careful not to hit the edge. Keep a thin "top" of the cupcake to replace back onto the cupcake. 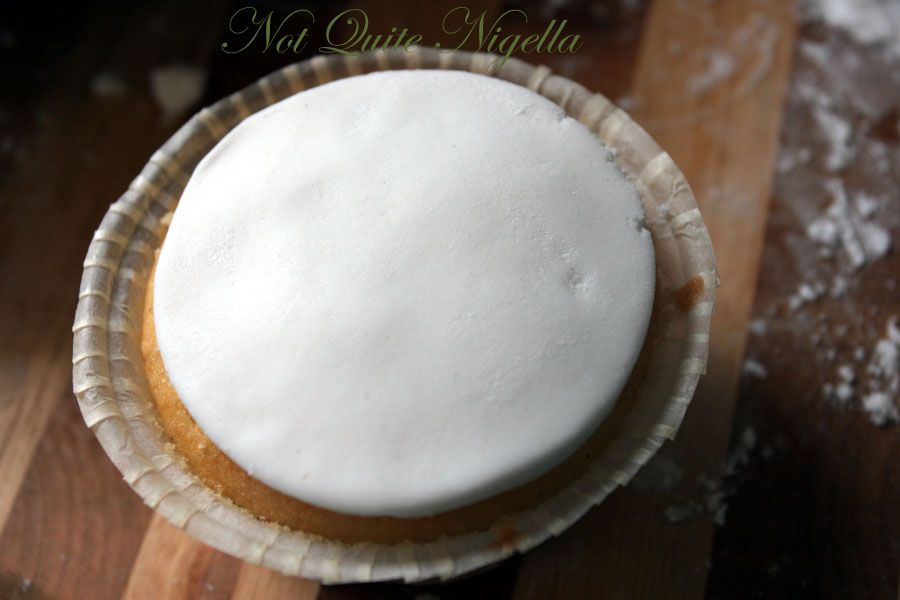 Step 2 - Fill with custard and replace with cupcake top. Then add ears, faces and eyes onto the pandas and bears. For Bears see story here 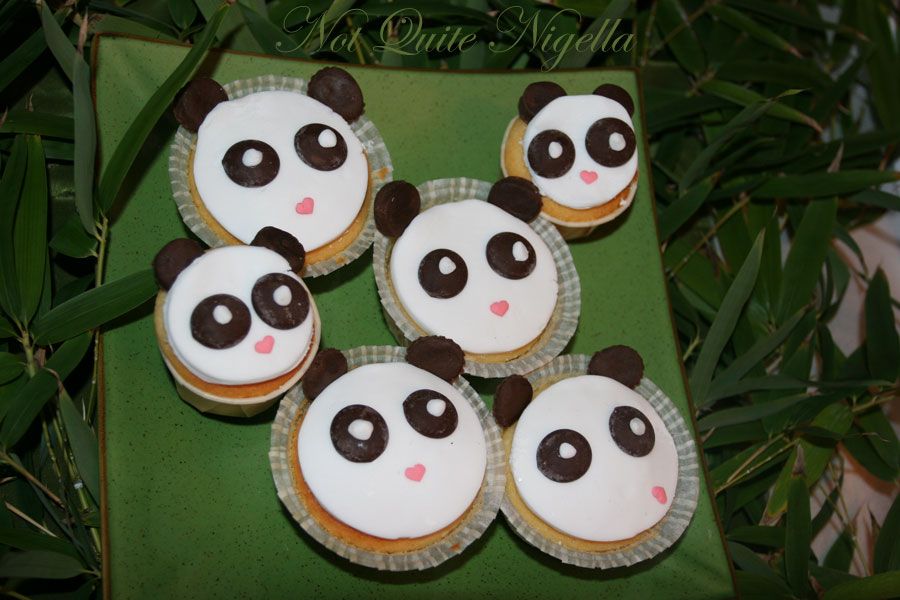