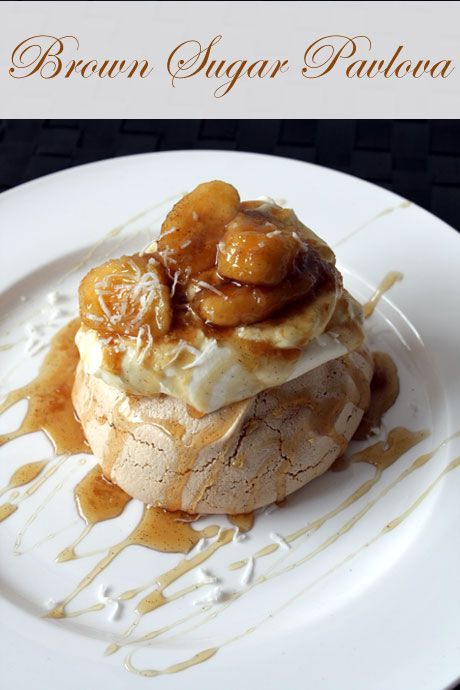 Arguing whether Pavlova is an Australian or New Zealand invention is a moot point. Because instead of arguing the point as well as arguing about Phar Lap and Russell Crowe who both were indisputably born in New Zealand, you could instead be sinking your fork into this lusciously gorgeous dessert made of sweet, crunchy meringue with a gooey centre and billows of whipped cream and fruit. So whilst others argue the point, I'll be the one in the corner eyes rolling back and toes curled at the textural sensation of the dish. 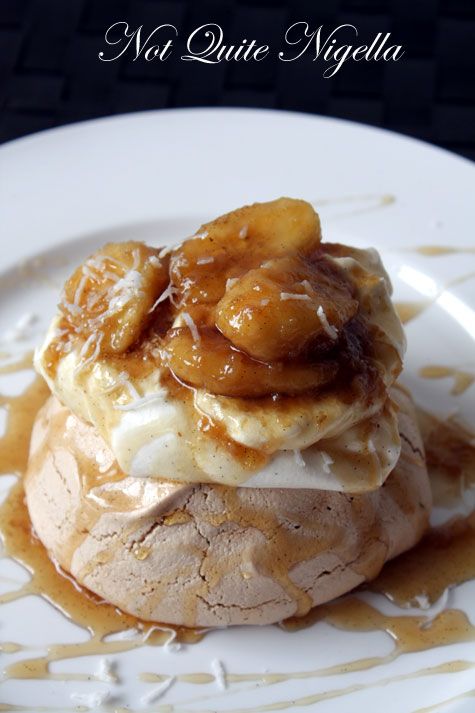 I have eaten and made many pavlovas in my life but it was only this year that I tried a brown sugar pavlova at the Mumu Grill Take it Slow dinner. I even asked Chef Mumu if he would give out the recipe to no avail. So I went online and serendipitously discovered that the Greedy Gourmand had already done one just last month, based on the recipe from Gourmet Traveller.

I usually use vanilla bean paste as I find it's the best way to get the authentic true vanilla bean flavour without dealing with scraping beans but this time I used a whole vanilla bean as I knew I could scrape the bean of the seeds and then simmer the whole bean in the syrup. I thought that instead of sliced banana, I wanted to make it with bananas flambé, a favourite dessert of ours. If you felt like it, you could certainly omit the vanilla & rum syrup as the bananas flambé have a delicious syrup. The only reason why I made the vanilla & rum syrup was that I had decided to do a banana flambé after the syrup was made. 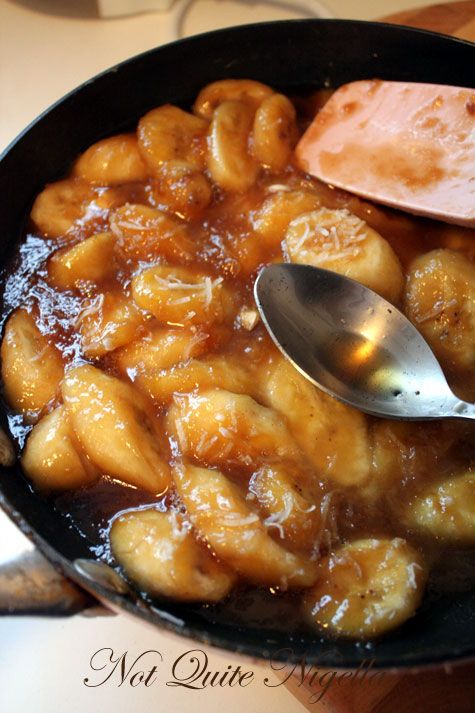 In order to get the gooey inner I cooked the individual pavlovas for 40-45 minutes as I didn't want it entirely dried out. I wanted the goo - hell I _needed _the goo. You know that heavenly moment when you crack the outer layer to reveal the voluptuously soft, slightly sticky toothsome inner not unlike a marshmallow. No arguing about that. 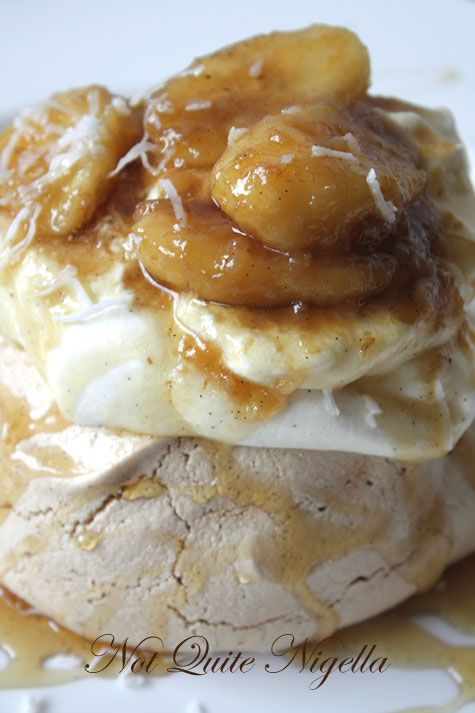 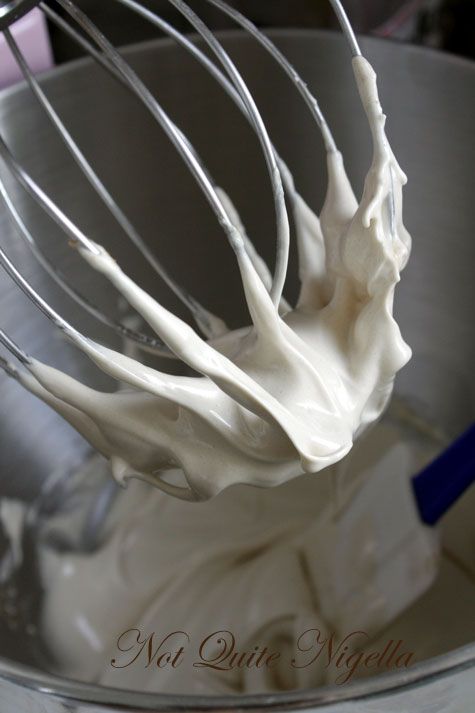 Step 1 - Preheat oven to 150c. Line 2 baking sheets with baking paper and draw 9 cms circle on each sheet to make 6 in total. Whisk egg whites and a pinch of salt until soft peaks form, then add sugar gradually and whisk until firm peaks form and mixture is thick and glossy. 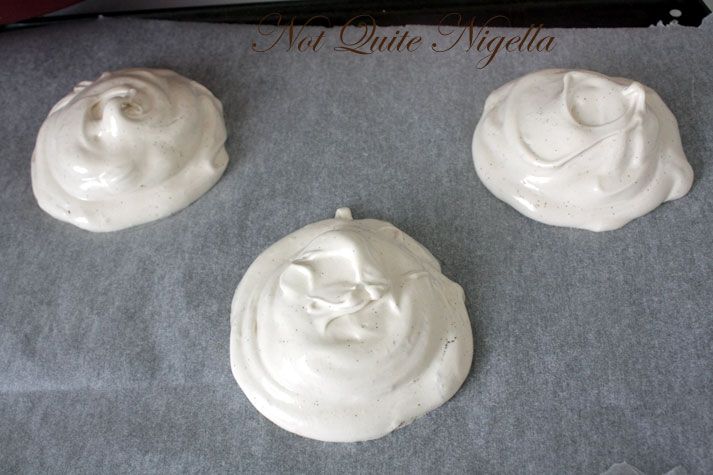 Spoon meringue onto the baking paper using the circles as a guide and bake for 40 minutes. Turn off oven and cool completely to cool pavlova. 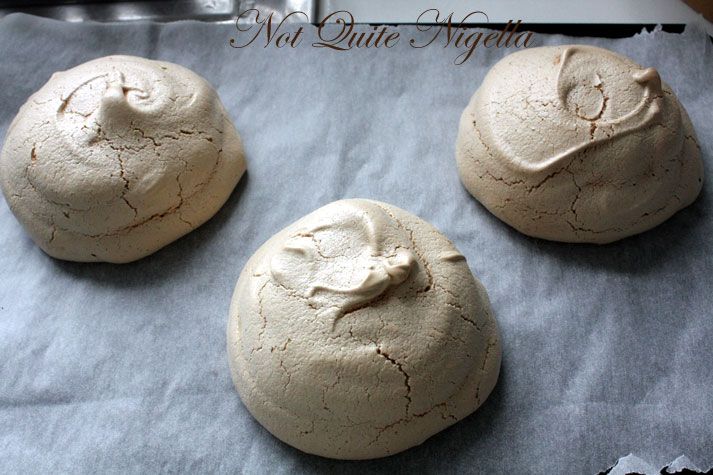 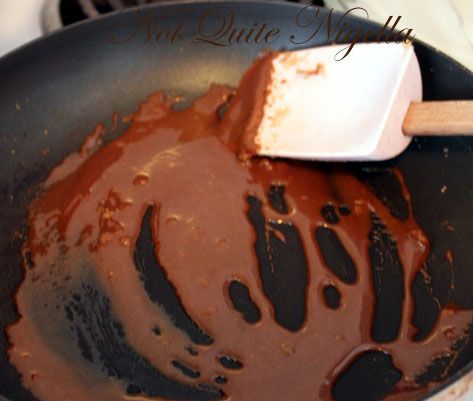 Step 1 - In a large, heavy based saucepan, melt brown sugar on medium heat until it becomes liquid. Then add butter and stir until combined. Add sliced bananas and cook for a couple of minutes until they are all coated with the caramel. Then add rum and banana liquer if using and flambé. Add a little water at the end to produce a thinner syrup (about 1/3 to 1/2 cup of water). Cool.

Step 1 - Meanwhile, for syrup combine sugars, lemon juice, vanilla bean and 130ml water in a small saucepan and stir over medium-high heat until sugar dissolves. Bring to the boil and cook until syrupy, remove from heat and cool to room temperature. Add rum and stir, then strain and cool. 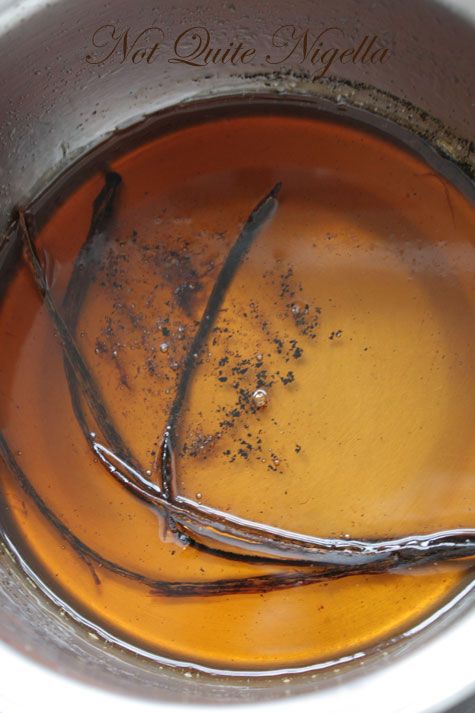 Step 1 - Whisk cream and vanilla bean paste together until soft peaks form. I didn't sweeten the cream with sugar as I thought it was sweet enough as it is although please do add sugar to taste if you see fit. Spoon on top of pavlova, top with cooled bananas flambe and drizzle with cooled vanilla & rum syrup.

Adapted from Australian Gourmet Traveller March 2009 via the Greedy Gourmand 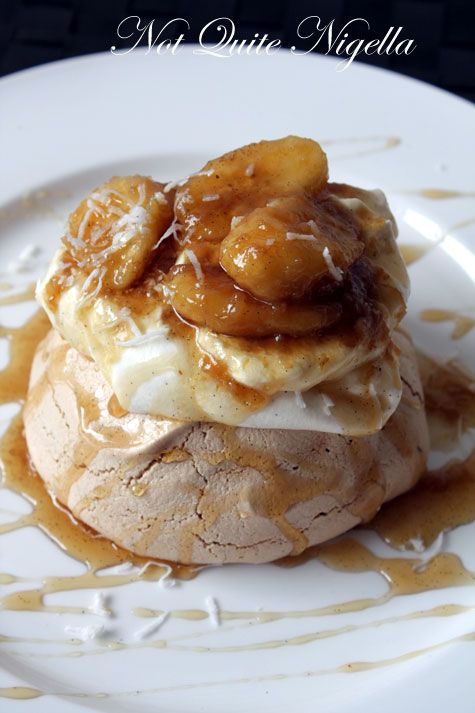