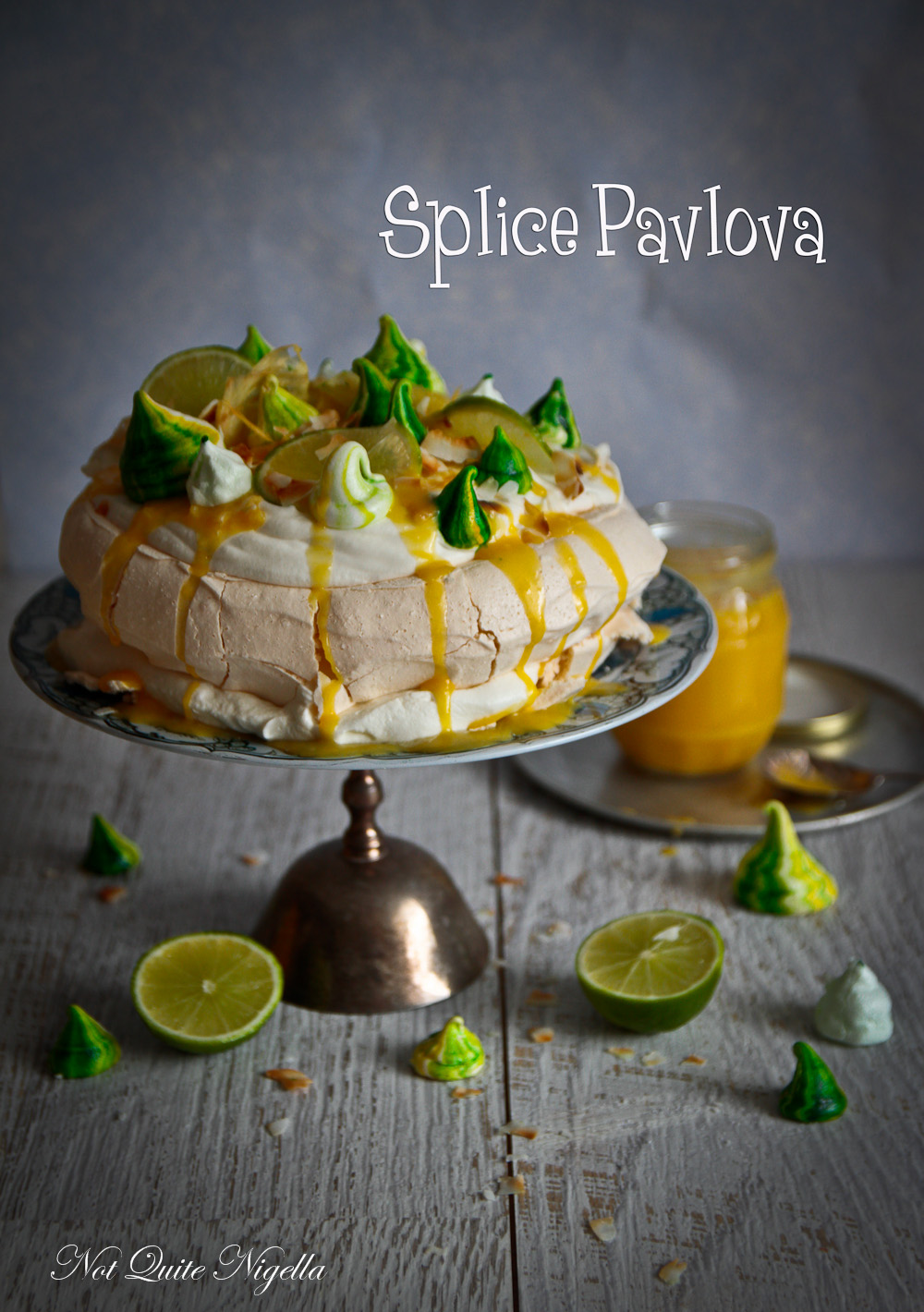 Perhaps I have lost my mind but making a tropical cake in the middle of Winter? But if you can't be basking in the warmth then let me show you the next best thing food-wise. It's a pavlova with a layer of pineapple and lime curd with a thick layer of fluffy coconut cream. Striped meringues and pineapple flowers adorn the top. Winter will be the furthest thing from your mind!

One of the best things about travelling is opening up your own little world and seeing things that you normally wouldn't, no matter how funny or silly. One of the things that I came across recently was a dog called Moo. In Thailand Moo means pig and Moo was a gorgeous little white chihuahua. Moo also had eyebrows drawn on her and wore a pretty little tutu dress. She was by anyone's definition rather spectacular and when we asked her owner if we could take a photo of her Moo posed perfectly as if she were a Kardashian on the red carpet. Moo was a superstar.

This got us to thinking of silly ideas all in order to stay in Thailand. Lena and I turned to each other and said that we should start up a business called "Eyebrows on Fleek" and draw eyebrows on dogs. Not only that but we could extend it to other animals. Beards on fish and cats with moustaches became ideas and before long we had conspired to create what could possibly be the silliest but most fun business plan known to man. But it was all so that we wouldn't have to leave this tropical paradise and go back to the cold weather. 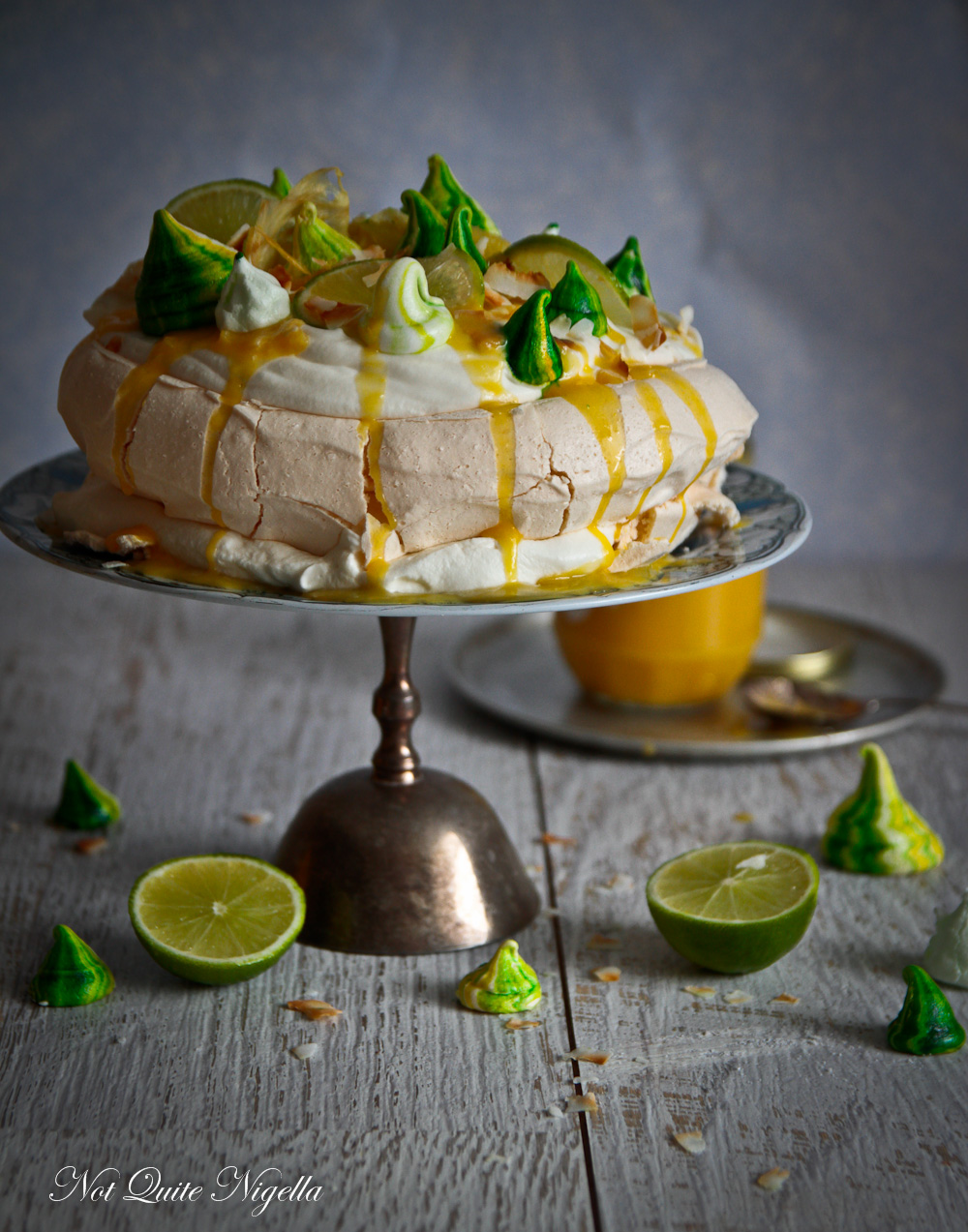 I know that in Australia we've had our own very cold Winter (I will eventually shut up about this but it may not be until Spring :P). This recipe is really to urge on an early summer or for those who are currently basking in the glow of the sun. One of my favourite ice creams growing up was the Splice - a pineapple and lime based ice block filled with vanilla ice cream. And it was during one of my day dreaming sessions that I thought that a Splice Pavlova might be a good idea. Even if we can't be in tropical surrounds perhaps we could eat something tropical.

Pavlovas are usually fruit and cream but I like to add another flavour layer to it with a fruit curd. It adds a tart sweetness and that way I'd get more of the pine lime flavour into the pavlova with the curd as well as the fruit. Sure there are a few components to it but most of these are decoration. You can add or subtract any ones that you don't want to do but a part of my loves the chaotic, drippy and piled upon look of this pavlova! 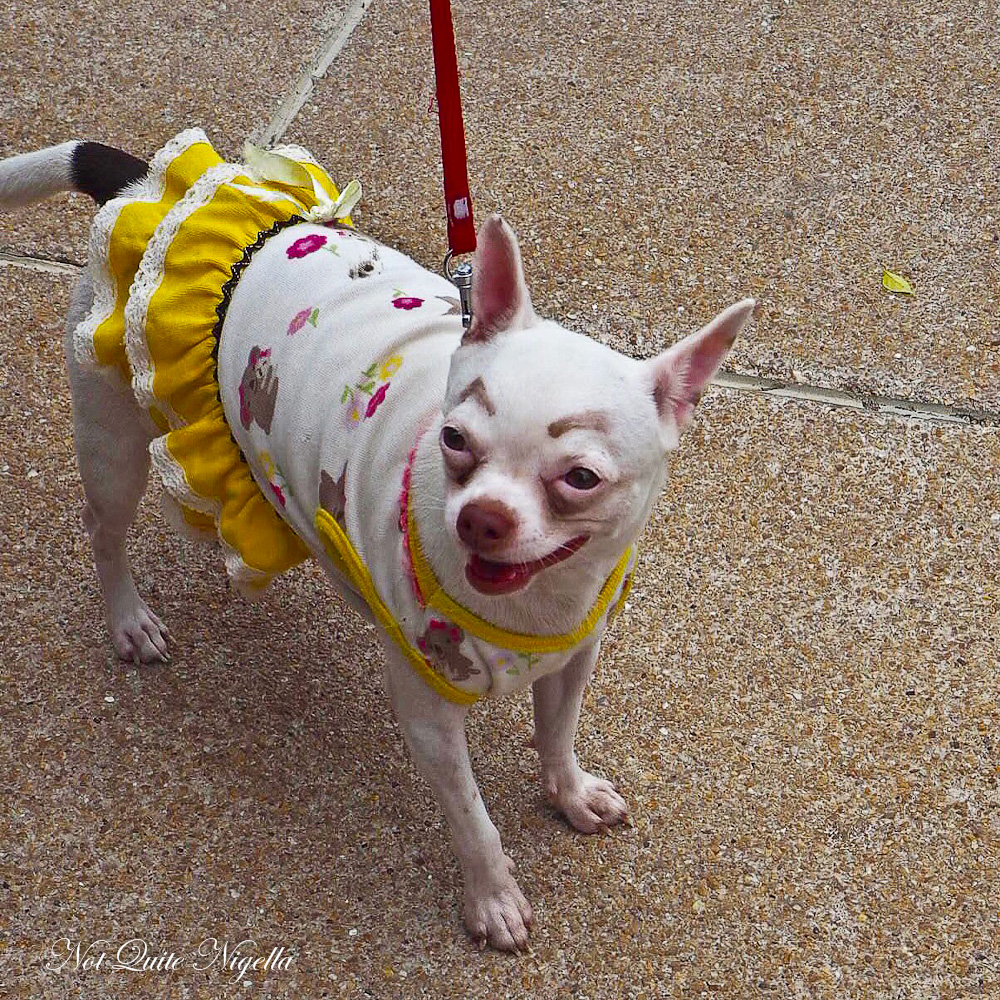 BTW here is a pic of Moo. Unique isn't she?

So tell me Dear Reader, what is the craziest business idea you've come up with or come across? Do you like dogs or animals in clothing? What do you think of Moo's eyebrows? And if you could teleport anywhere in the world right now where would it be? 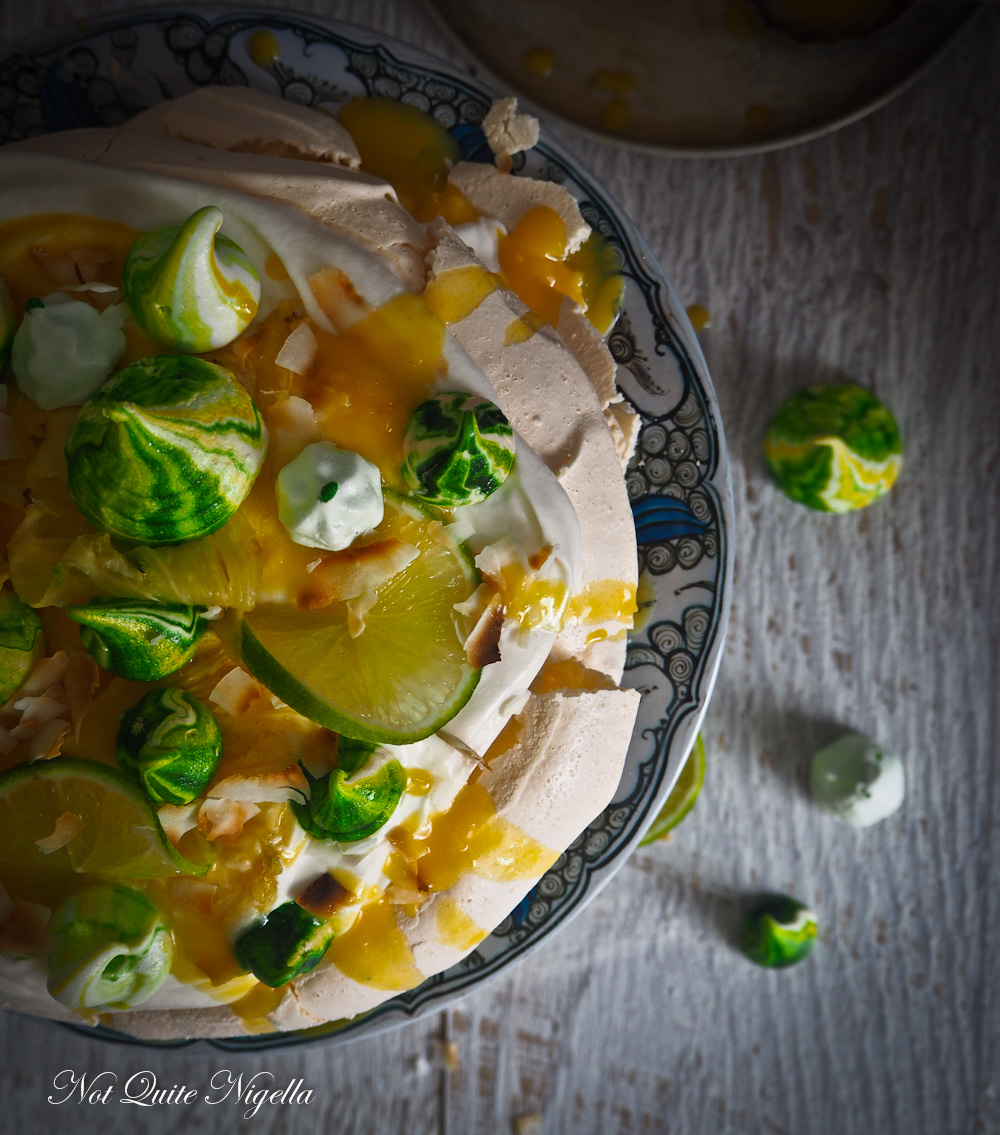 Pineapple & Lime curd (this makes more than what you need so feel free to make less, I made more because I had 7 yolks spare) 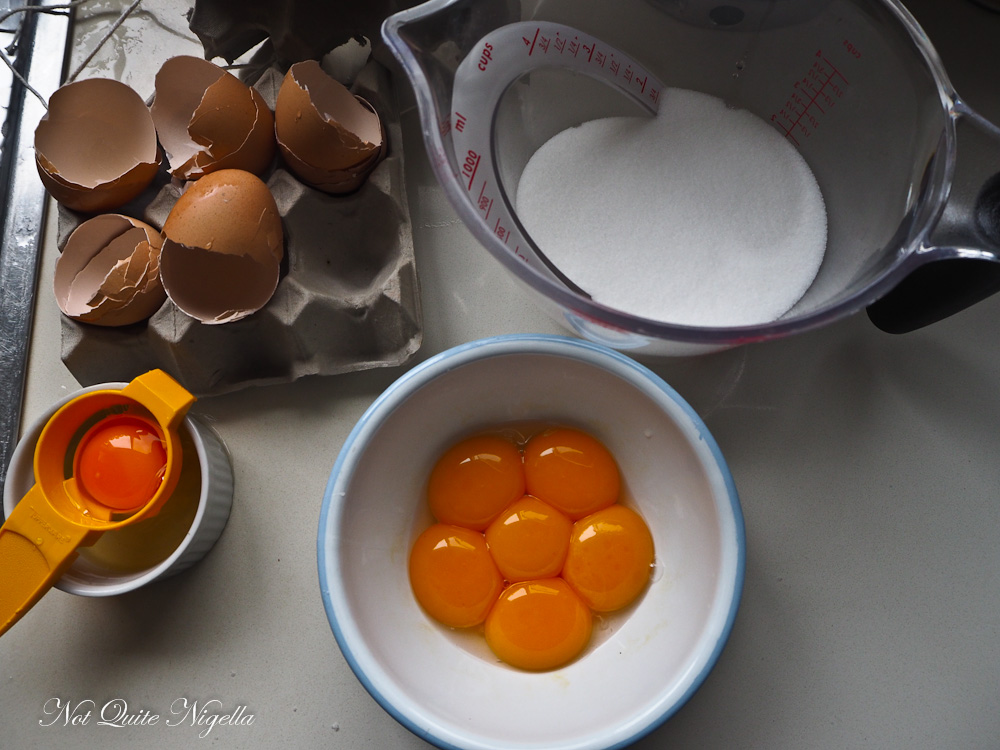 Step 1 - Preheat oven to 100C/212F. Line two baking trays with parchment and trace two identically sized circles around 18cm/7.2inches in diameter. Whip the egg whites with the cream of tartar in a clean mixer with a whisk attachment. When it reaches soft, foamy peaks, gradually add the sugar and cornstarch. Whip until you get firm peaks - you should be able to turn the bowl upside down and the white should not move. 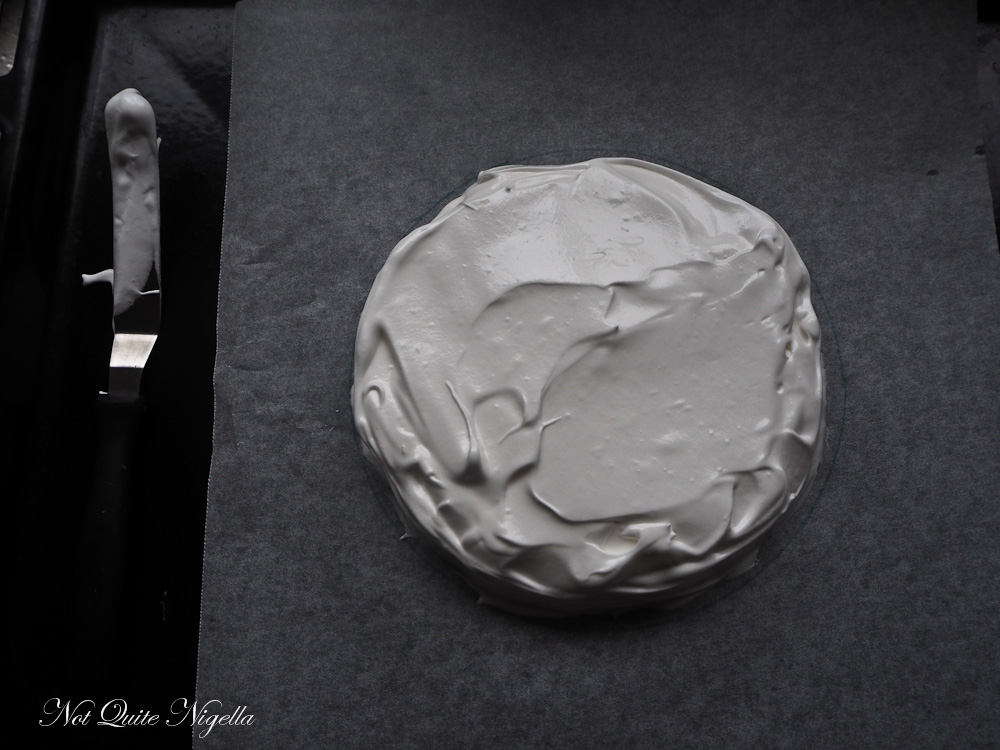 *Step 2 - *You'll leave about 1/4 of the mix behind to make the striped meringues (for more meringue design ideas take a look here). Divide the remaining meringue into half and spread to almost fill the circle (the meringue expands slightly once it bakes). Smooth the top and bake the pavlova for 1.5 hours. 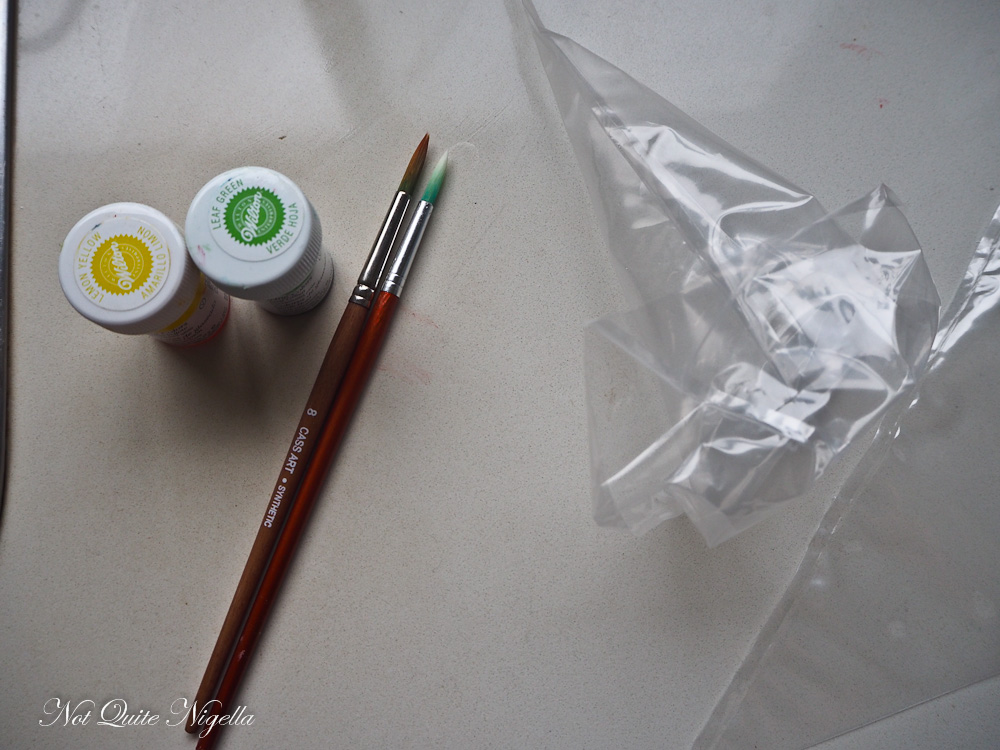 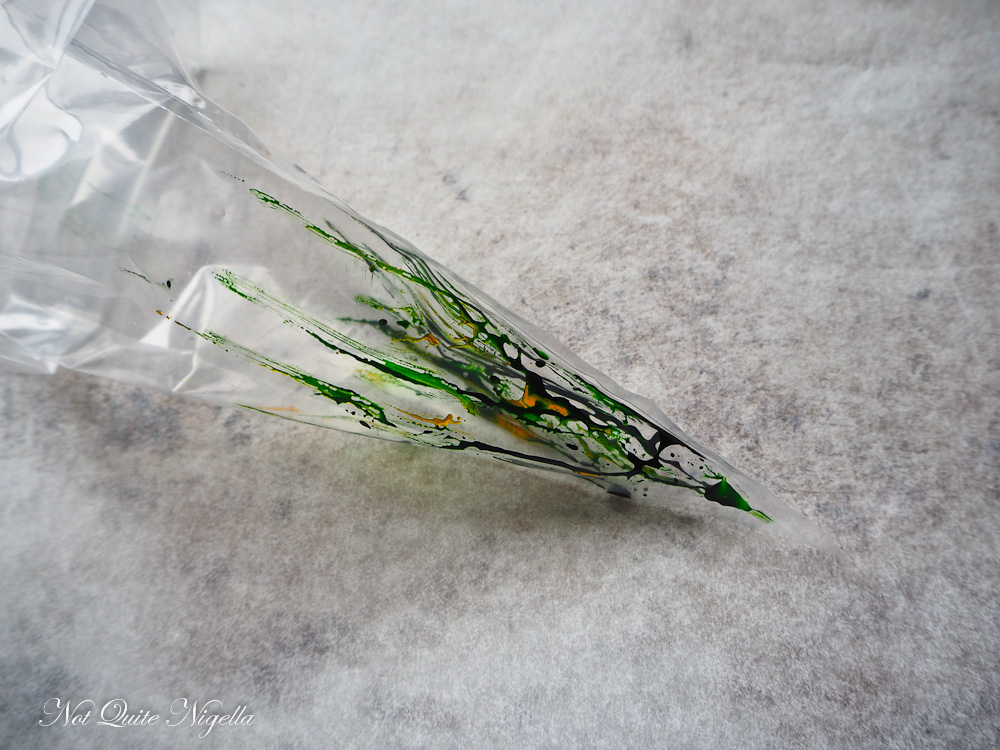 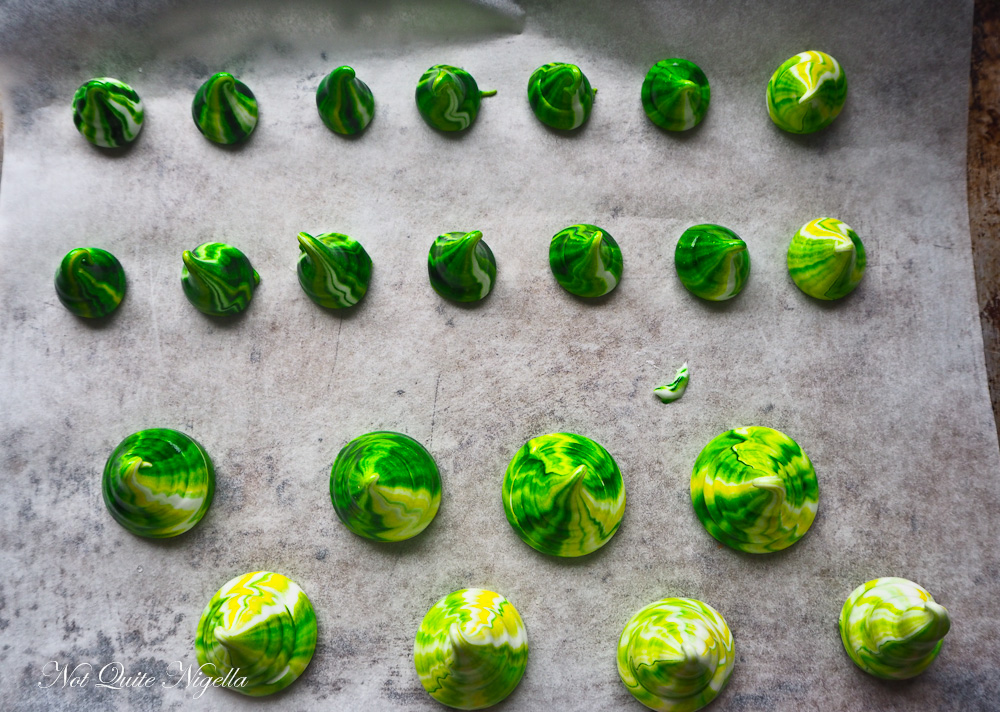 Step 3 - Make the striped meringues. Line two more baking trays with parchment. With a paintbrush, paint stripes down the inside of the piping bags using a separate paintbrush for each colour (I made green and yellow ones). Fill with a small amount of meringue-about 1/2 of 3/4 cup of meringue will produce a vivid striped effect (the colour lessens towards the end of the meringue). Snip the end of the bag and pipe onto the parchment and bake for 1 hour until they can lift off the parchment. 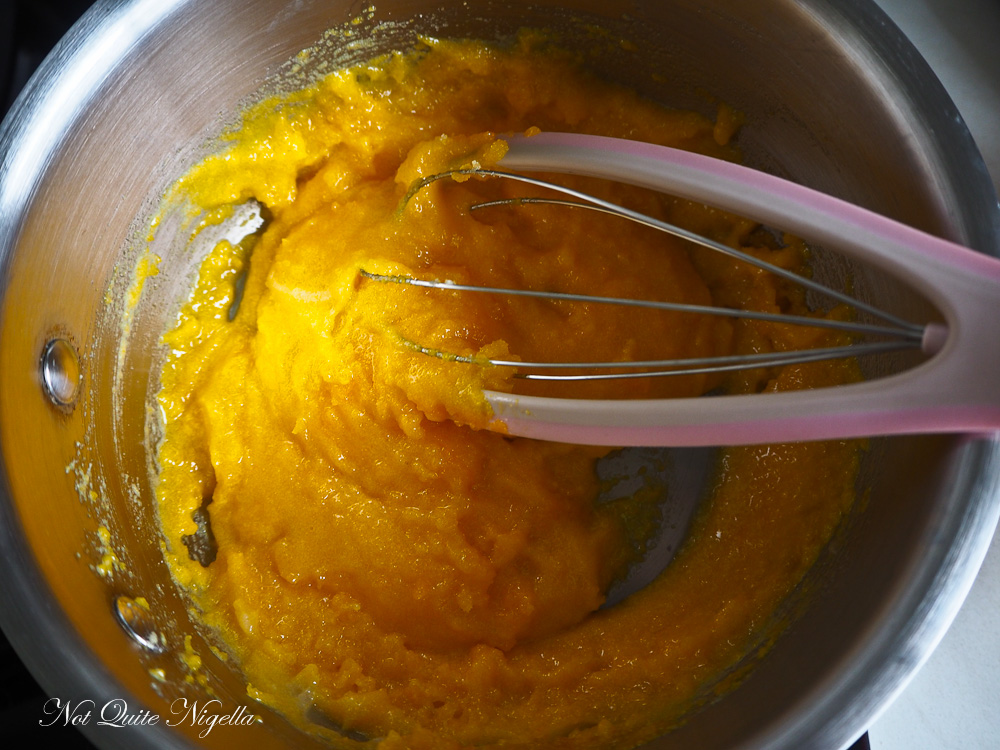 Step 4 - Make the curd as it needs to cool completely. Whisk the yolks and caster sugar in a heavy bottomed saucepan and then add the butter on low heat. When it has melted, add the limes and crushed pineapple (juice and all). Keep cooking on low heat stirring occasionally, it will take about 30 minutes to thicken up completely. Cool completely. 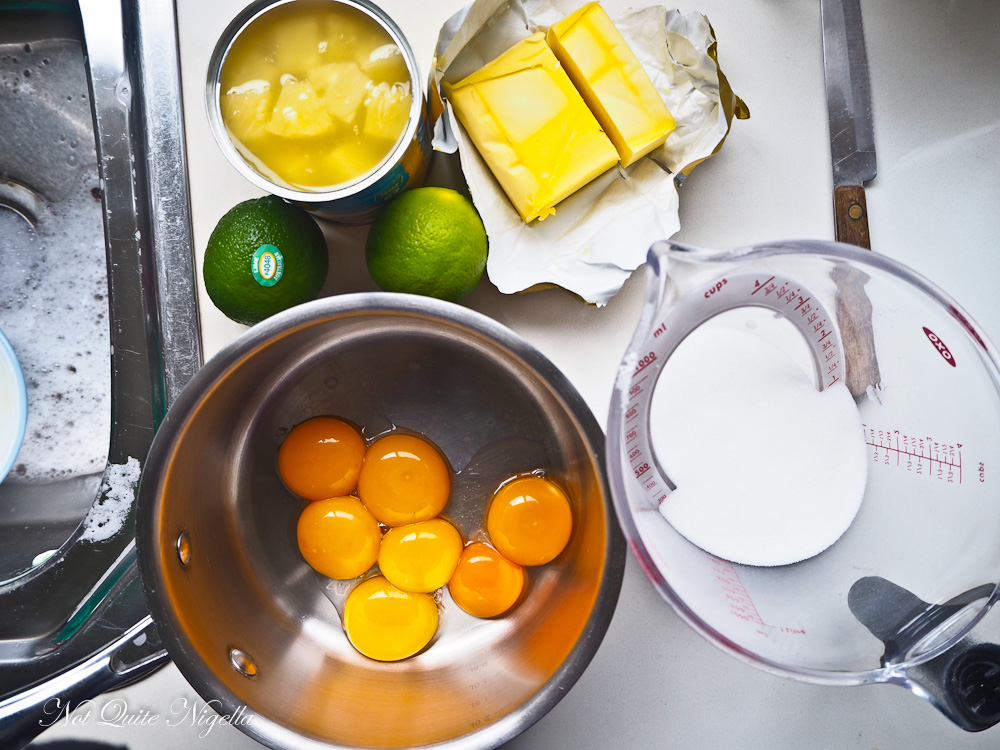 Step 6 - Assemble the cake by placing one layer on a serving plate. Spread some curd over it and then some whipped coconut cream. Place the second layer on top and repeat with the curd and whipped cream. Decorate with pineapple flowers, curled lime slices, stripey meringues and coconut flakes.