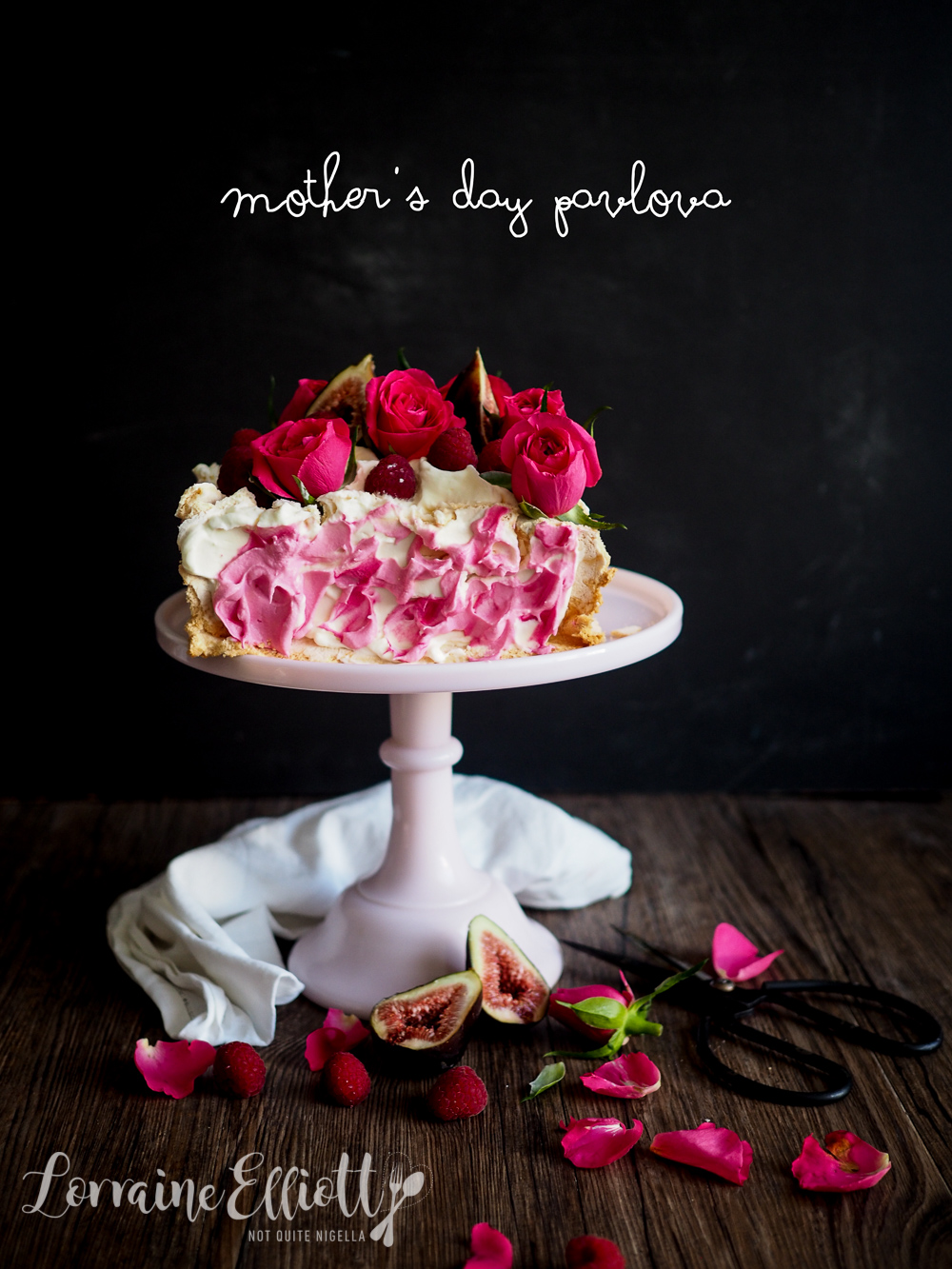 Mother's Day calls for something special and that means a cake that will impress mum! This square pavlova looks like a gift and is painted with raspberry whipped cream and topped with fresh raspberries, figs and roses! I called her Priya.

One day I was daydreaming about making a square pavlova but I didn't know how it would turn out as I'd never seen any. Pavlovas are rather delicate beasts and round definitely has more structural integrity than a square - with a square the sides tend to be weaker and the corners stronger. So I didn't hold much hope for this until I made it. Actually until I cut into it and saw the lusciously thick layer underneath the crunchy outer. Dearest Reader, this was a fabulous pavlova if I do say so myself. 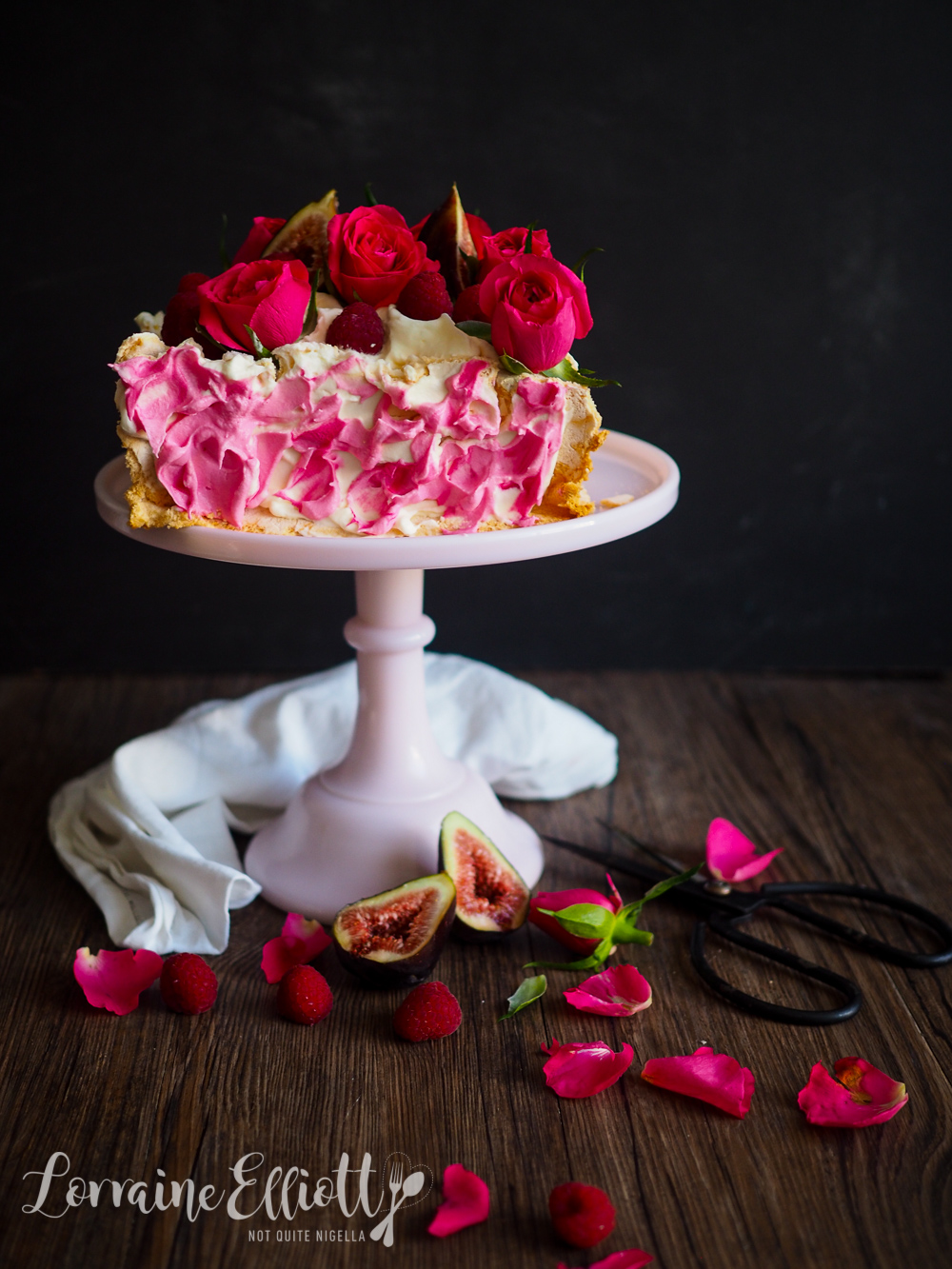 I portioned out half to Ivy who adores pavlova. She's American and had never heard of it before moving here but now adores the stuff. And the other half went to my mother because of course it was for Mother's Day. And if you're thinking of making one, I definitely would recommend it, the degree of difficulty is low if you follow the instructions I promise!

I had a situation recently that had a certain degree of difficulty. Mr NQN and I were recently travelling to a regional destination and arrived at the house we were staying at late at night. It was a stunning property and the lovely PR person said that we had the entire house to ourselves and that she had left the door unlocked. I walked up to the front door and turned the handle. It was locked but the lights were on inside. 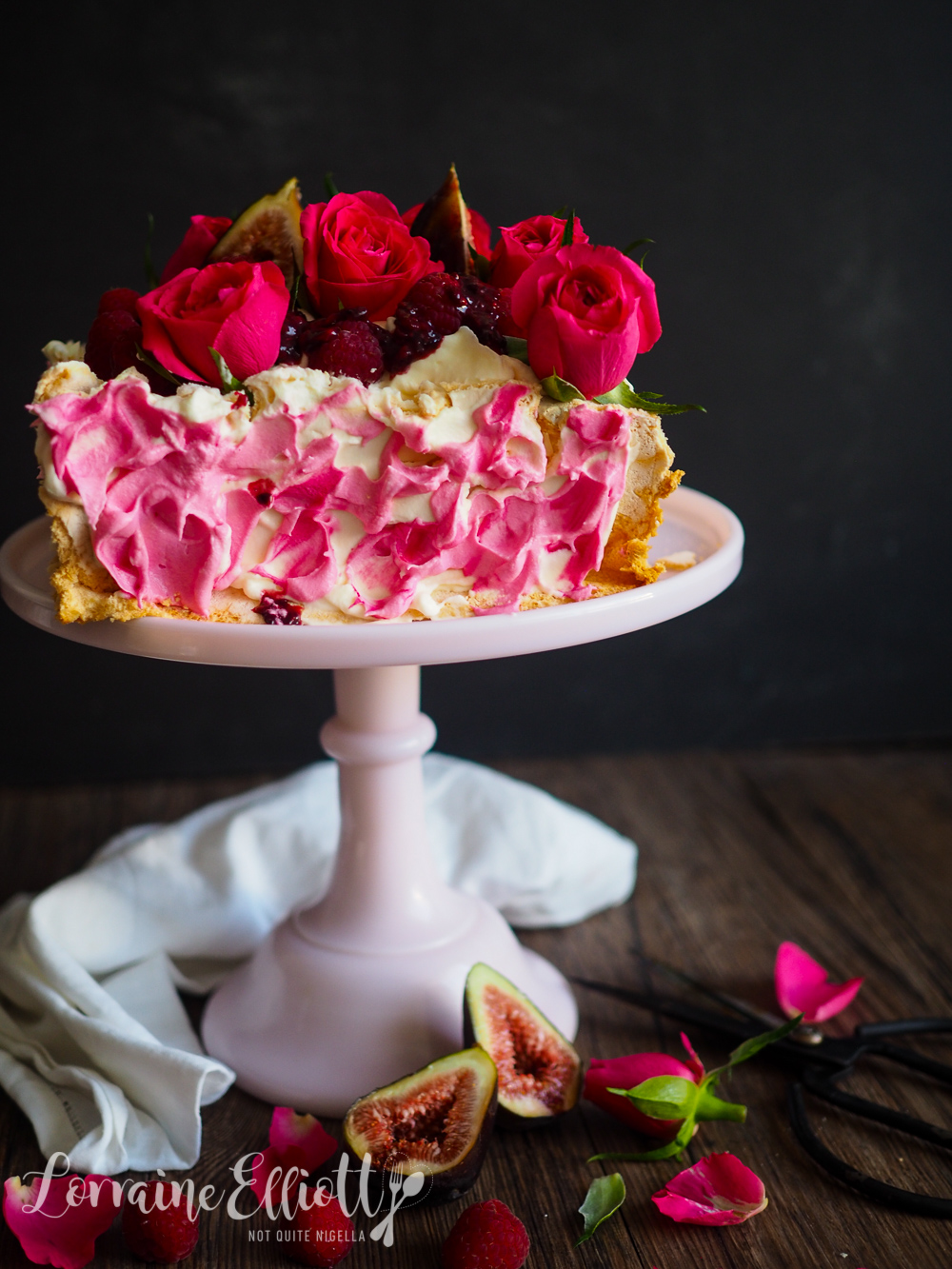 I tried to call the PR woman but there wasn't much reception and by then the front door had opened and the woman was standing in front of me. She was another travel writer who as far as I knew was supposed to be staying at the smaller house next to it because she was by herself. 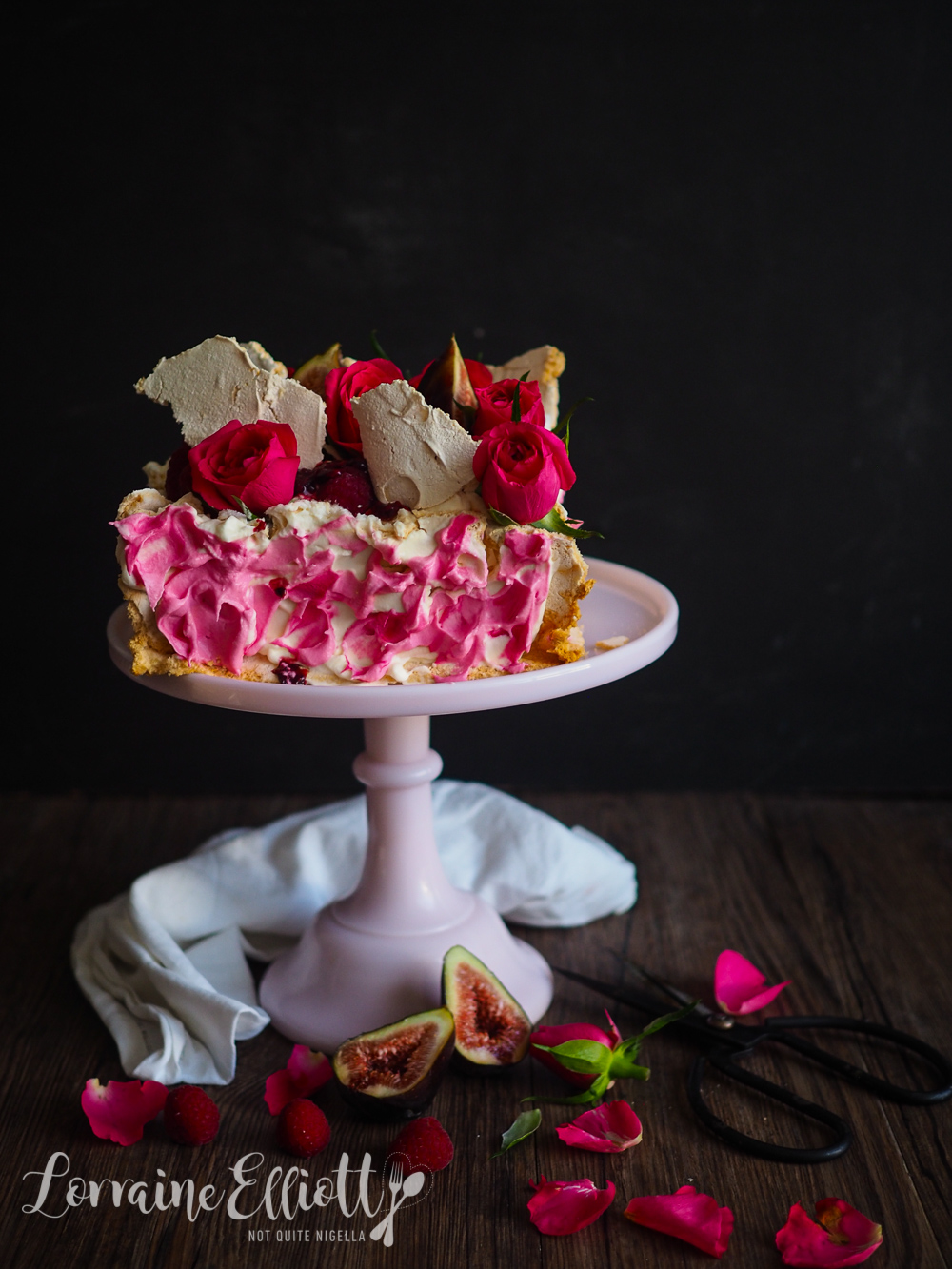 With the shards of meringue added on top

"There's plenty of room in here and lots of food," she said and I looked at Mr NQN warily. "I've taken the biggest bedroom and I'm not moving," she said emphatically.

When I mentioned that I thought that she was supposed to be in another house she repeated, "I'm not moving, I'm comfortable and settled in here".

"If you're not moving, we will then," I said to her. Because I don't mind sharing a house with friends but sharing a house with someone I don't know isn't high on my list of wants especially if there are two properties. It was a tense stand off between the two of us with Mr NQN milling around nervously in the background (he loathes confrontation). 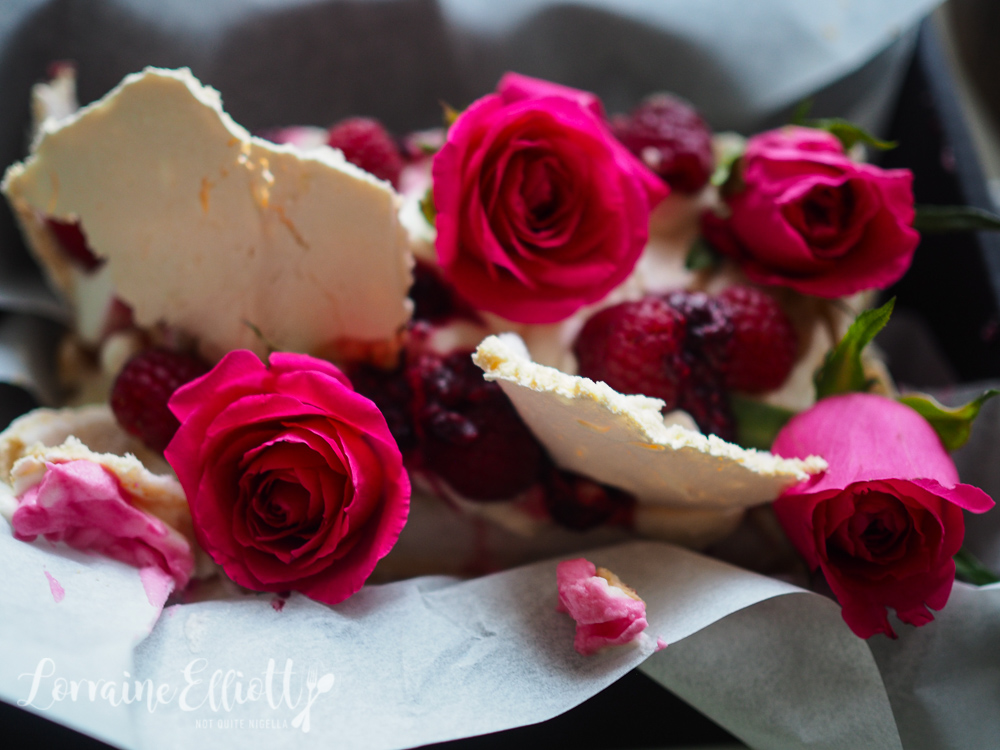 But then I got quite stubborn. I knew that this was meant to be our house and that she wasn't meant to be there. "I'm going to try calling them again," I said and finally got a hold of the PR woman. I explained to her the issue and she asked to speak to the writer directly. She told her firmly but politely that she had gone to the wrong property, eaten our food and had to move to the correct house that was intended for her.

She didn't kick up too much of a fuss after that, moving her things. But for a moment I was preparing myself for a battle of wills and egos!

So tell me Dear Reader, what would you have done in this situation? Given in and stayed together, moved to the other house or try to get her to move? And do you like pavlova? 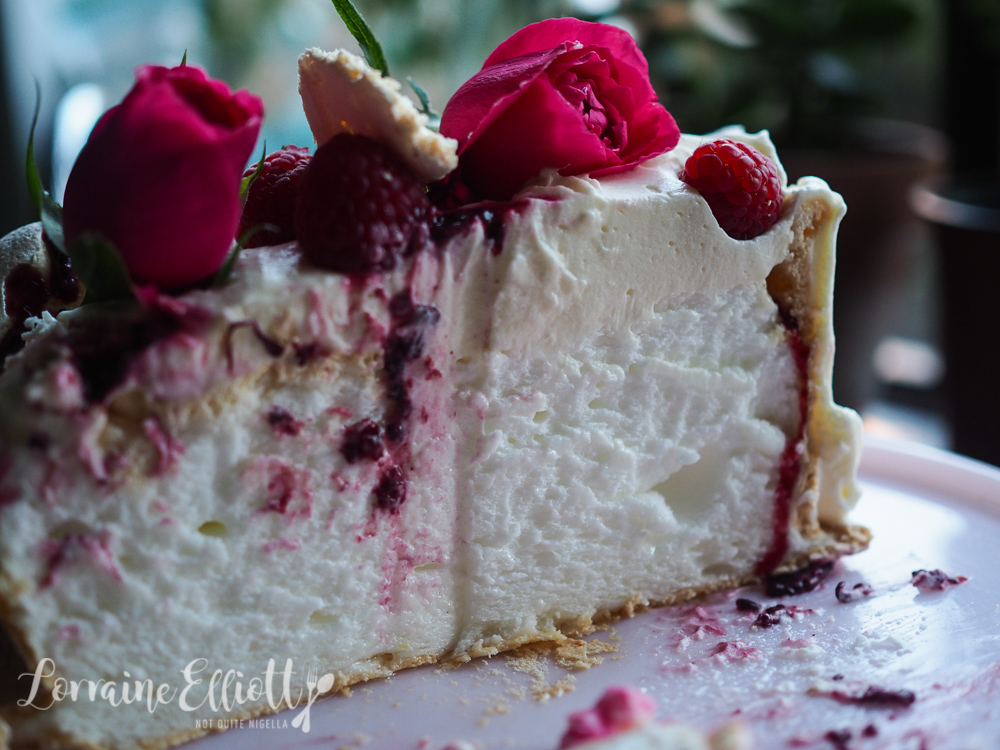 The pavlova is best made the day before

Step 1 - Preheat oven to 130C/260F. Line the base and sides of a 20x20cm square tin with parchment. Make sure the bowl and beaters are scrupulously clean before starting. 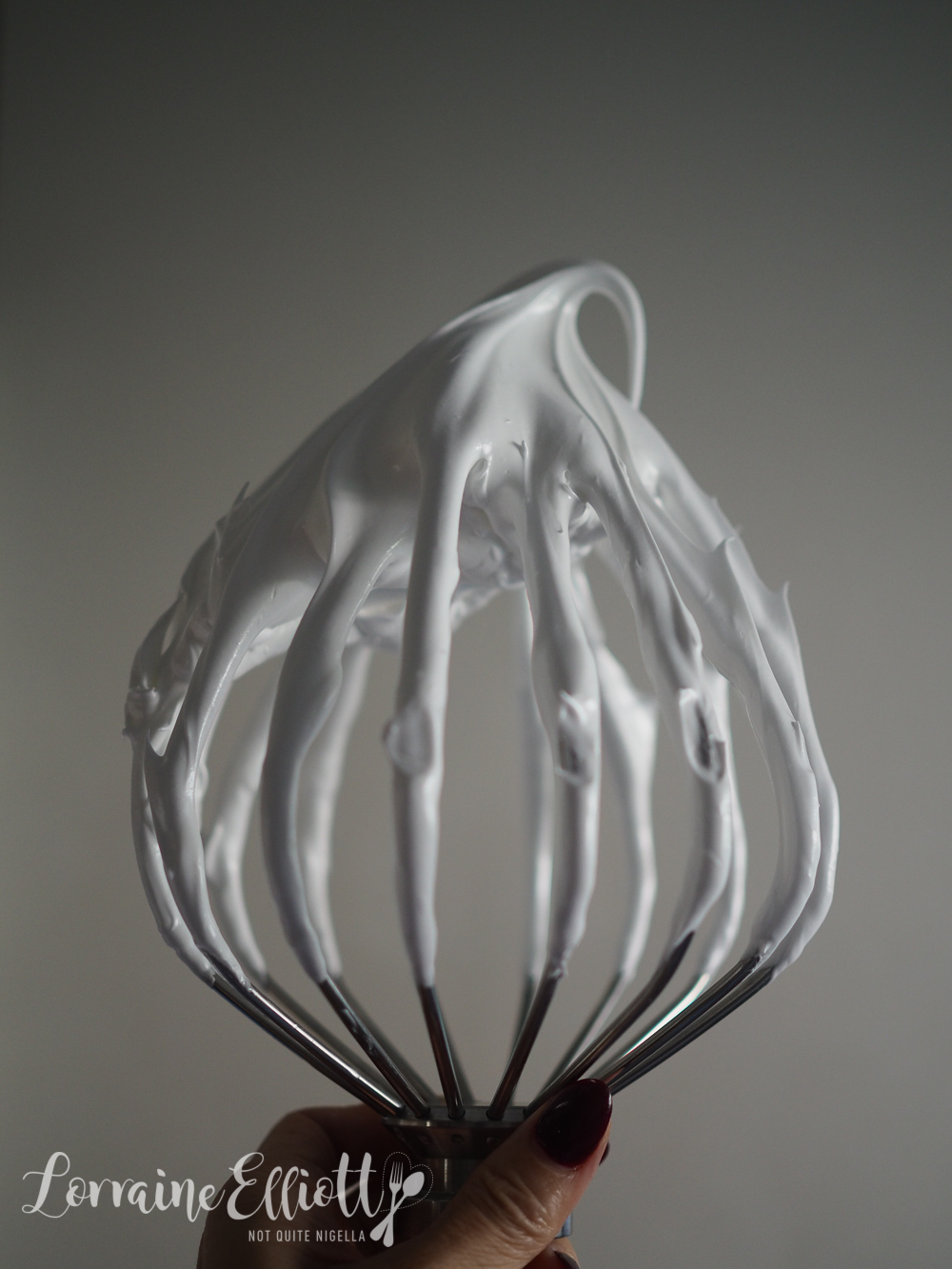 Step 2 - Whisk the egg whites with the cornflour and vinegar until soft peaks form. Add the cream of tartar and then then the sugar pouring in either gradually or in 3-4 lots. You want this to become thick and stiff (that's what the cream of tartar is for) and you should be able to tip the bowl upside down and it should not move. 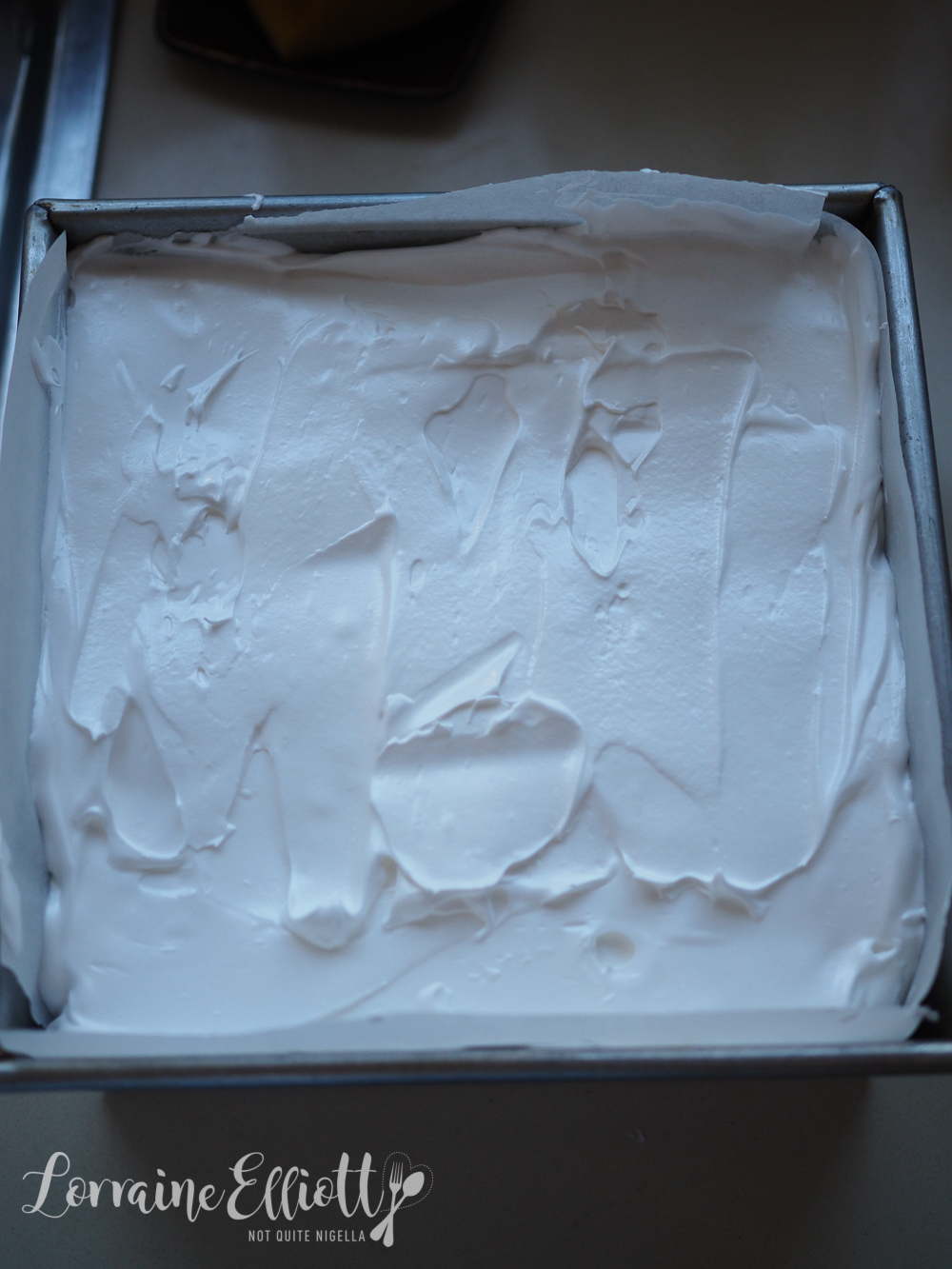 Step 3 - Spread into the prepared tin and bake for 2 hours. When it is done, turn off the heat and cool it in the oven overnight.

Step 4 - Whip the cream with the icing sugar and vanilla until you get stiff peaks. Take 1/2 cup out and tint this pink and add raspberry flavouring.

Step 5 - When you are ready to serve it, gently place the pavlova on a serving plate and spread white cream around the sides and place the rest in on top of the pavlova. Then using a palette knife dab some of the pink cream around the sides and place any left over on top. Add the pureed raspberries, fresh raspberries and sliced figs on top with the roses. 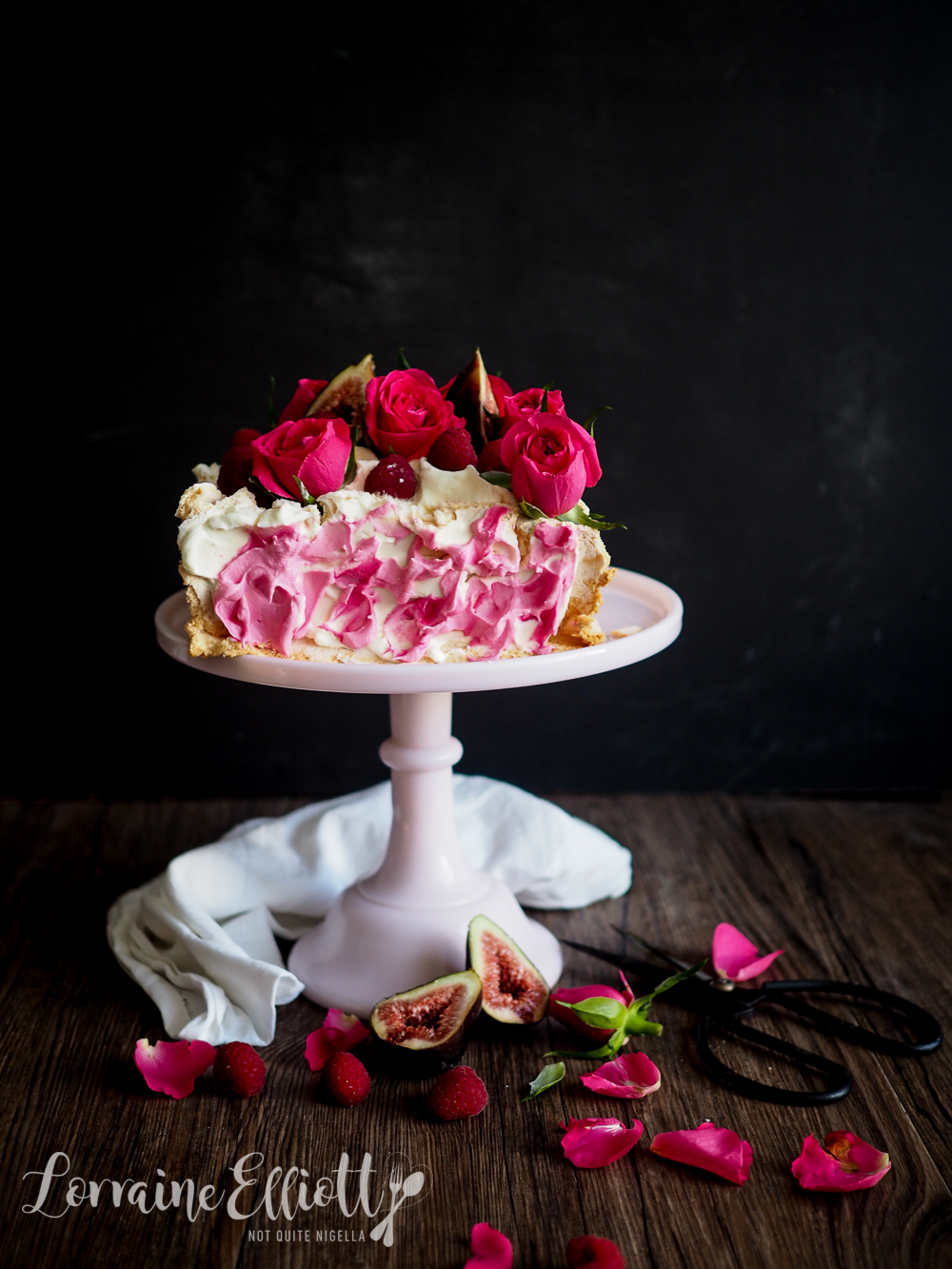