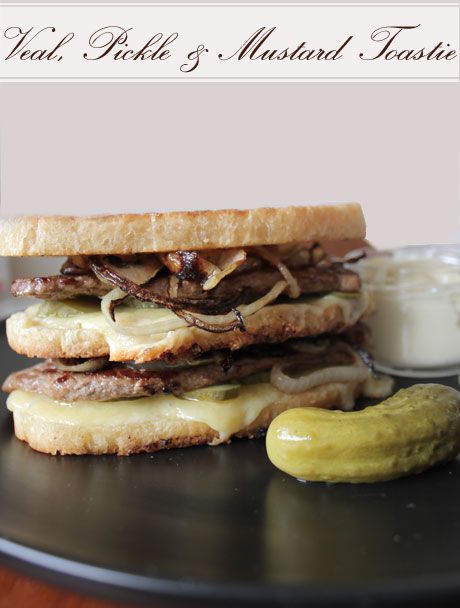 I was in the passenger seat of a car when I saw the girl walk past us at the intersection. I let out a gasp.Is she topless? I asked my father who was doing the fatherly thing and picking me up from the airport. He is partially deaf so all I got back in response was Whaaat? while flapping a hand at me to stop talking. He was too busy trying to negotiate the roundabout whilst I was distracted by errant and unexpected cleavage.

The girl was wearing a bustier top and she was much bustier than the bustier top itself so it meant that she was inevitably spilling out of it. I stared at her open mouthed wanting to warn her that she had indeed fallen out of her top before realising that:

Had I in fact turned into someone's mother or more correctly, someone's grandmother? 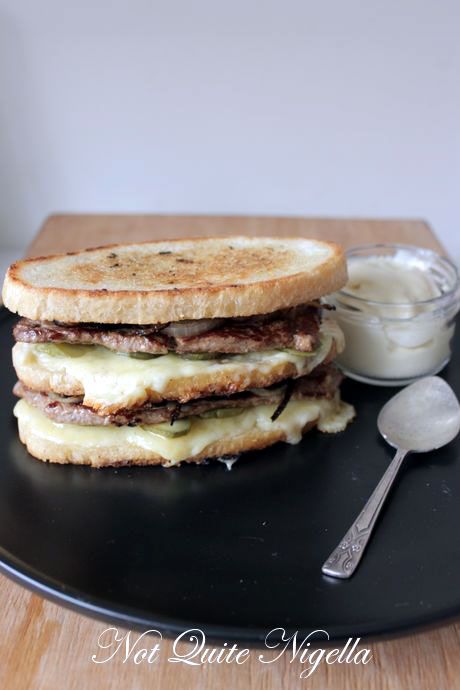 It's true, my tastes had certainly changed over the years. But these were more food tastes and perhaps just some slightly added conservatism in my fashion choices (I dread to hear "mutton dressed as lamb" but secretly still chuckle at that turn of phrase). Of course my tastes in food have changed. I was not a particularly adventurous eater when young but now the odder the better. Years and years ago when I first tried pickles in my burgers, I had shunned those salty, pickled little specimens. But now years later I cannot get enough of them. A burger is not complete without one and meaty sandwiches in particular are natural match for them.

I found this recipe in my Donna Hay "Seasons" cookbook. It was of course under the "Winter" section which is full of gorgeously toasted and calorie laden concoctions. I go through my cookbooks with a pad of post its and when I see a picture and my mouth starts to water, then I bookmark it. So far it's been my never fail way of making food although it can lead to strife when you start to lust at complicated pastries and cakes. The Thousand Layer Apple Cake was a prime example of poor judgement. 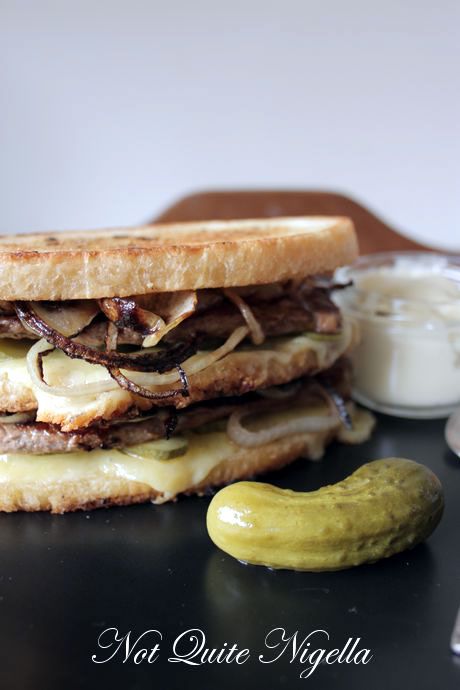 Rest assured though Dear Reader this is ridiculously easy and can be done in one pan on a night when the rain pours and the apartment heating mists up the windows. I know it's low in vegetables being that it's just pickle therein those folds but you could always add some leaves of baby spinach or arugula. If the need strikes.

So tell me Dear Reader, is there an area where your tastes have matured?

And in some unexpected news, reader Isla alerted me to my mention in this month's Australian Women's Weekly! Now that is a pleasant surprise! ;) 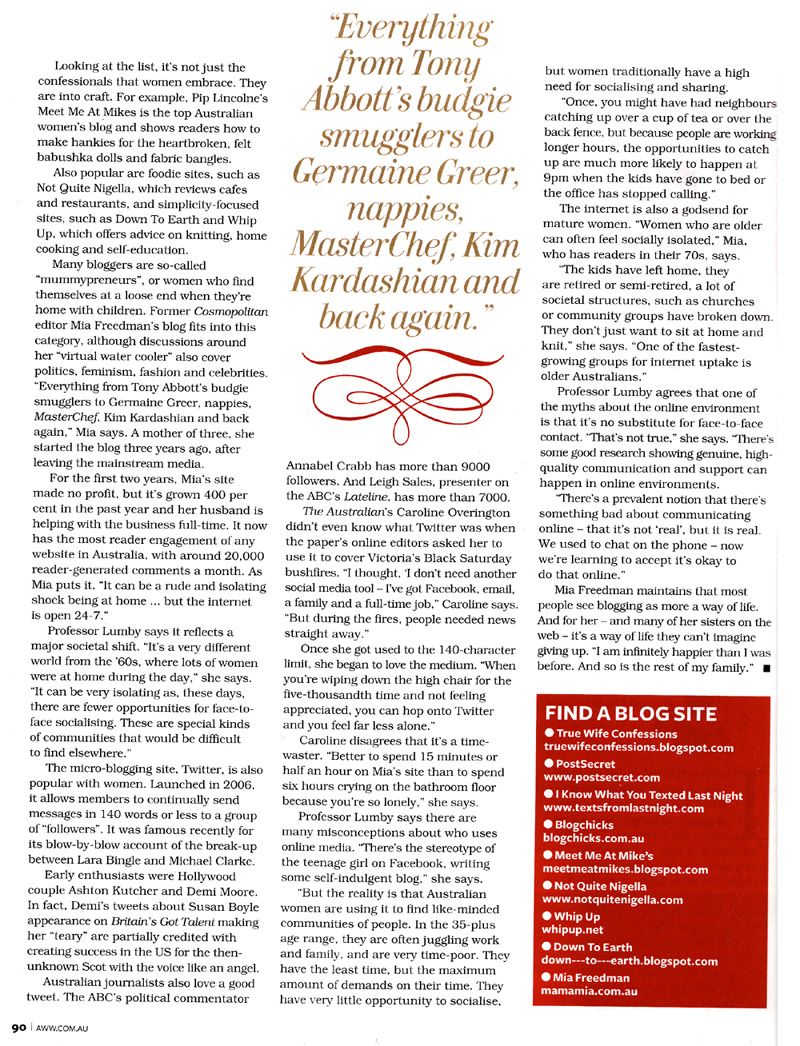 Step 1 - Firstly turn on the exhaust fan above your cooktop. Heat the oil in a large non stick frying pan over low heat. Add the onion and cook for 10 minutes. Cover and cook for a further 10 minutes until golden. Set aside. 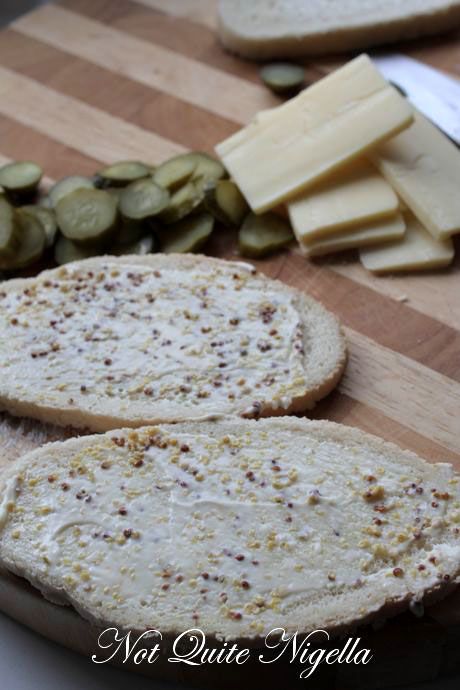 Step 2 - Increase heat to high and cook veal for 1-2 minutes on each side or until browned.

Step 3 - Rub the cut garlic clove over the bread slices. Spread four slices of bread with mustard and mayonnaise and top with cheddar. Wipe the pan with a paper towel and add butter to the pan on medium heat. Place the slices of bread cheese side up and place lid on top of pan to keep it warm to melt the cheese. When cheese has melted, layer with the pickle slices, veal and caramelised onions. Fry the remaining two pieces of bread in some butter and then top the snadwiches wiht this third and final layer. 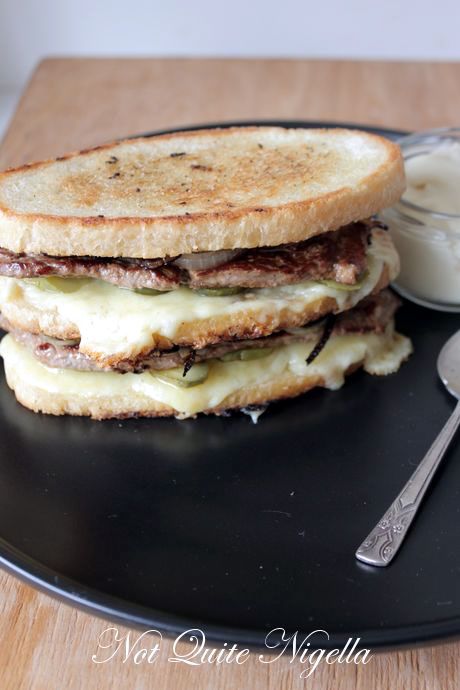