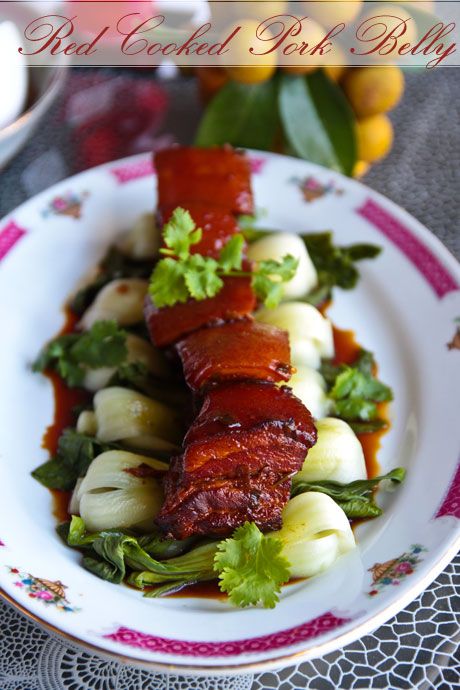 On the whole, Chinese people are considered to be quite superstitious No better evidence can be found than with Chinese New Year and the symbolism food plays at a Chinese New Year banquet. There are noodles which are served as they are long and signify a long life. Then there are a slew of round red and gold items to symbolise coins or money. I never really thought of my parents as superstitious-I have mentioned that we grew up in a house numbered 44 with the much dreaded number 4 which is double bad luck. But then again my father made sure to get a car license plate with the number 8 in it which is good luck as it sounds like the word prosperity (sensing a money theme here? ;) ).

In the spirit of being a bad Chinese daughter, I certainly didn't go into any major money making professions-I was expected to become a doctor, lawyer or accountant but alas I went into advertising and then blogging. And when I travelled overseas I collected trinket after trinket as a gift for my parents. I never really noticed that there was no evidence of these items around the house and it was only when I was cleaning out a basement cupboard that I found a whole lot of my gifts. Apparently I have a knack for choosing  gifts with motifs that signify bad luck or demons so my mother didn't want to display them but instead hid them downstairs in a locked cupboard (demons apparently are put off by keys ;) ). 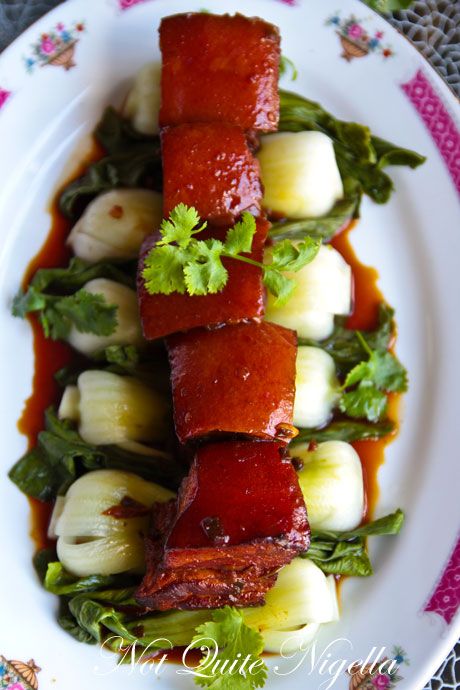 I am superstitious up to a point. I had my Chinese horoscope read last year and it wasn't a good one. In fact the woman told me that I would be given very difficult challenges  in 2011 and it was not going to be an advantageous year for me. I was so upset that I immediately switched  into denial mode. I told her that no way was it not going to be a good year and that I would exercise mind over prediction and make it a good year and no-one could stop me. And with a huff and click of heels I was off and muttering to myself what a load of rubbish it was. I'm sure she was rolling her eyes at my back thinking that control freaks should not have their horoscopes read...

What I do enjoy however is themes-I'm a certified theme freak. If I could them every day of the week I would. When we were planning a Chinese New Year dinner for the extended family on the Chinese side, I thought that red cooked pork belly would be just the idea as red is a good luck colour and pork is supposed to be a good meat for Chinese New Year. I also bought some longans on the vine from a trip to Cabramatta and they are sort of golden orbs so they might add some good luck. These dinners are called reunion dinners as members of the family return back home to meet up and eat dinner. I received a email from lovely, long time reader Joanne who had celebrated with her own themed feast and she emailed me that "the pair of chopsticks used during the reunion should be of equal length, or you risk missing the boat, bus, flight and so on when you travel!" 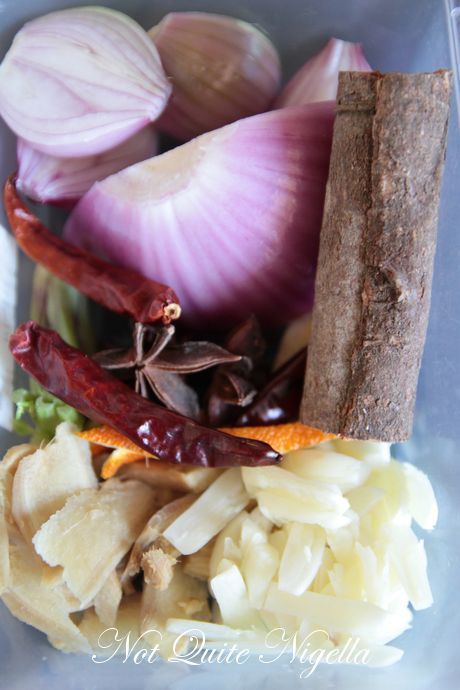 I know pork belly is not really on the list of many post Christmas diets but I like to think that it's fine for an occasional treat, especially for an event that rolls around once a year. The pork belly is quickly boiled and then cut into tall, jellied cubes of striated meat and fat. These cubes are then caramelised in a dark brown sugar sauce and then given an aromatic bath in the oven for two and a half hours until each cube becomes so satiny, gelatinously smooth and soft that it melts in your mouth. And I'd hazard a guess that that would be good luck ;)

So tell me Dear Reader, do you think that you have good or bad luck on the whole? And which Chinese zodiac sign are you? I'm a rat which is actually not supposed to be as bad as it sounds. Apparently rats are good friends and good to know! 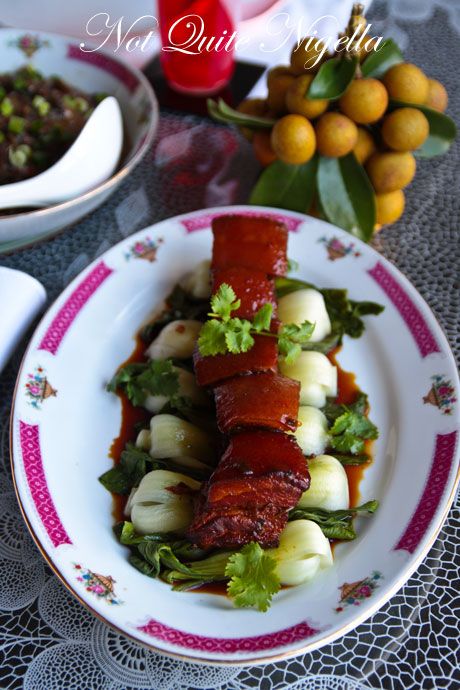 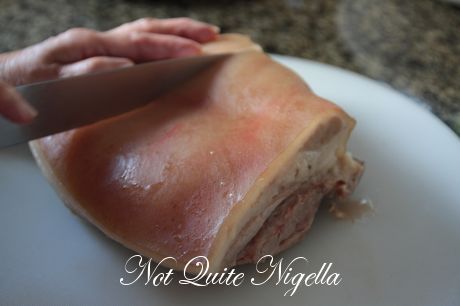 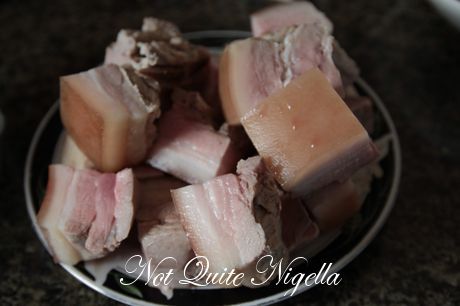 Step 1 - Start by par boiling the pork belly (which can be done in advance and put in the fridge, just make sure it comes back to room temperature when you're ready for step 2). Place a large pot of water on the boil that can fit the pork belly. Then submerge the pork belly and par boil for 25 minutes. Drain (reserve par boiling water) and cool until it is able to be handled. 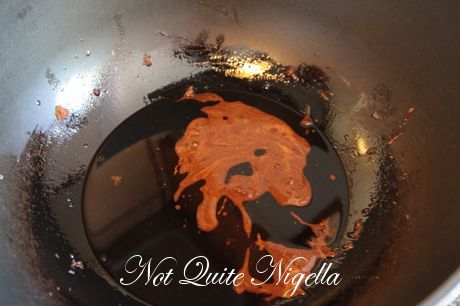 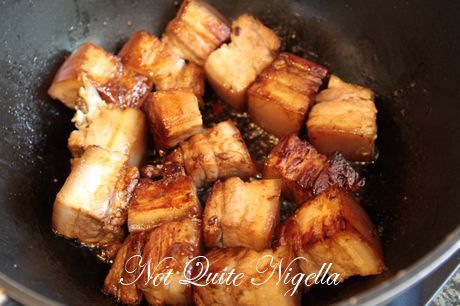 Step 2 - Preheat the oven to 180C/350F and have a large cast iron or oven proof pot with lid ready. Cut the pork belly into 1 inch cubes. I find it much easier to get the rest of the ingredients ready for the next step. Put a large saucepan on medium to high heat and heat up the oil. Add the brown sugar and stir until melted, it will go from grainy to a brown liquid within the oil. Then carefully and it will spit, add the pork belly cubes and cook them until they are caramelised. This will smell really good by this stage and you may be tempted just to finish it right then and there! But don't, I promise, there is more to come... ;) 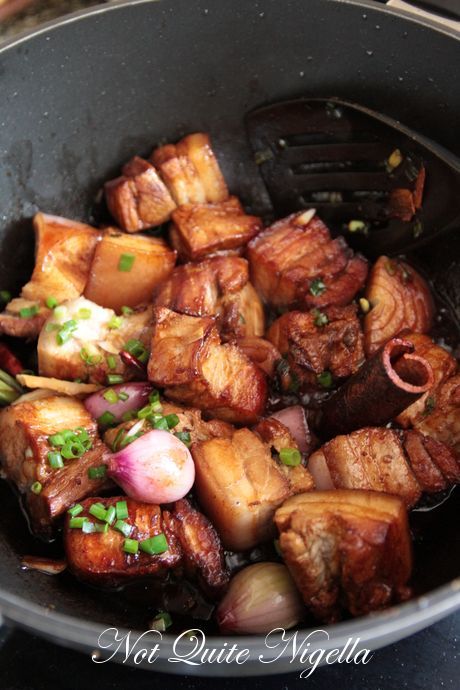 Step 3 - Add the eschallots and caramelise these for a minute or two and then add the cassia bark, star anise, garlic, ginger, soy sauces, cooking wine and salt and simmer for 5 minutes. Then transfer over to the cast iron pot and add stock to this, stir and then place lid on and bake in oven for two and a half hours or even three hours checking on it every hour to see whether it needs more stock or water (you can add the par boiling water). 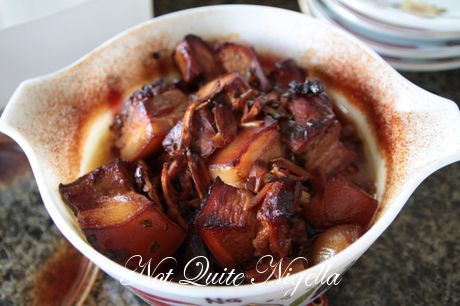 After an hour in the oven 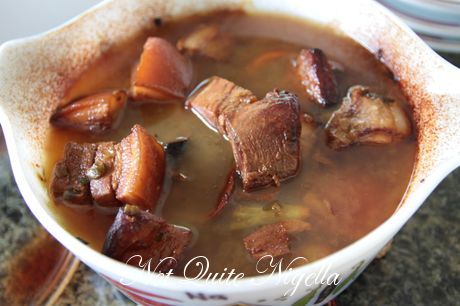 Cover it with more of the par boiling water

Step 4 - When ready, the pork will so very soft to the touch. Skim the fat from the top and discard it. If the sauce is too liquid, remove the pork pieces and place the pot of the sauce on the hob and reduce it down further. Serve with coriander and white rice-and even length chopsticks! 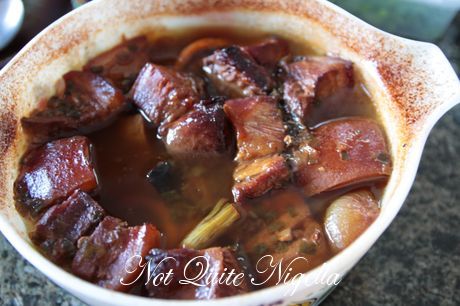 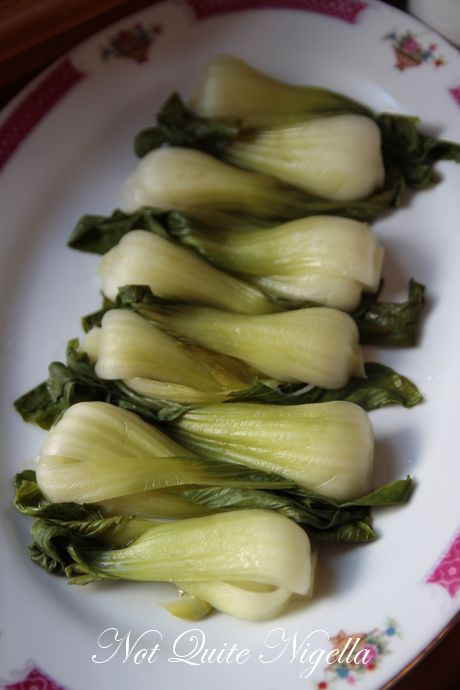