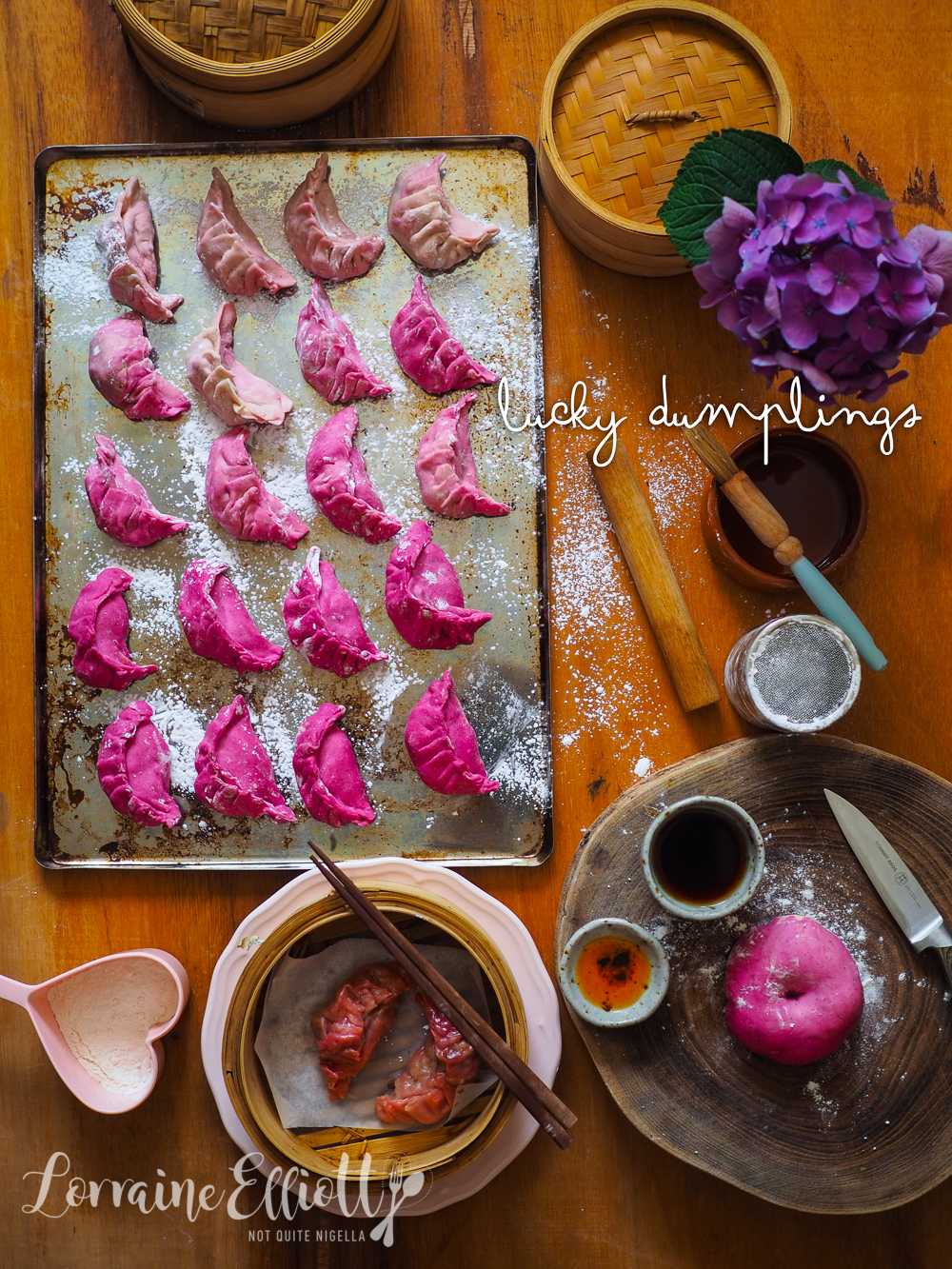 My mother never made her dumplings pink, that was me but we use her dumpling recipe filling inside and her pleating method. I had every intention of making regular dumplings but then I was in one of those health food scoop shops and came across an interesting ingredient: dragonfruit powder. I used it to naturally colour the dumpling skins a bright pink (although the colour does change somewhat when they are cooked). 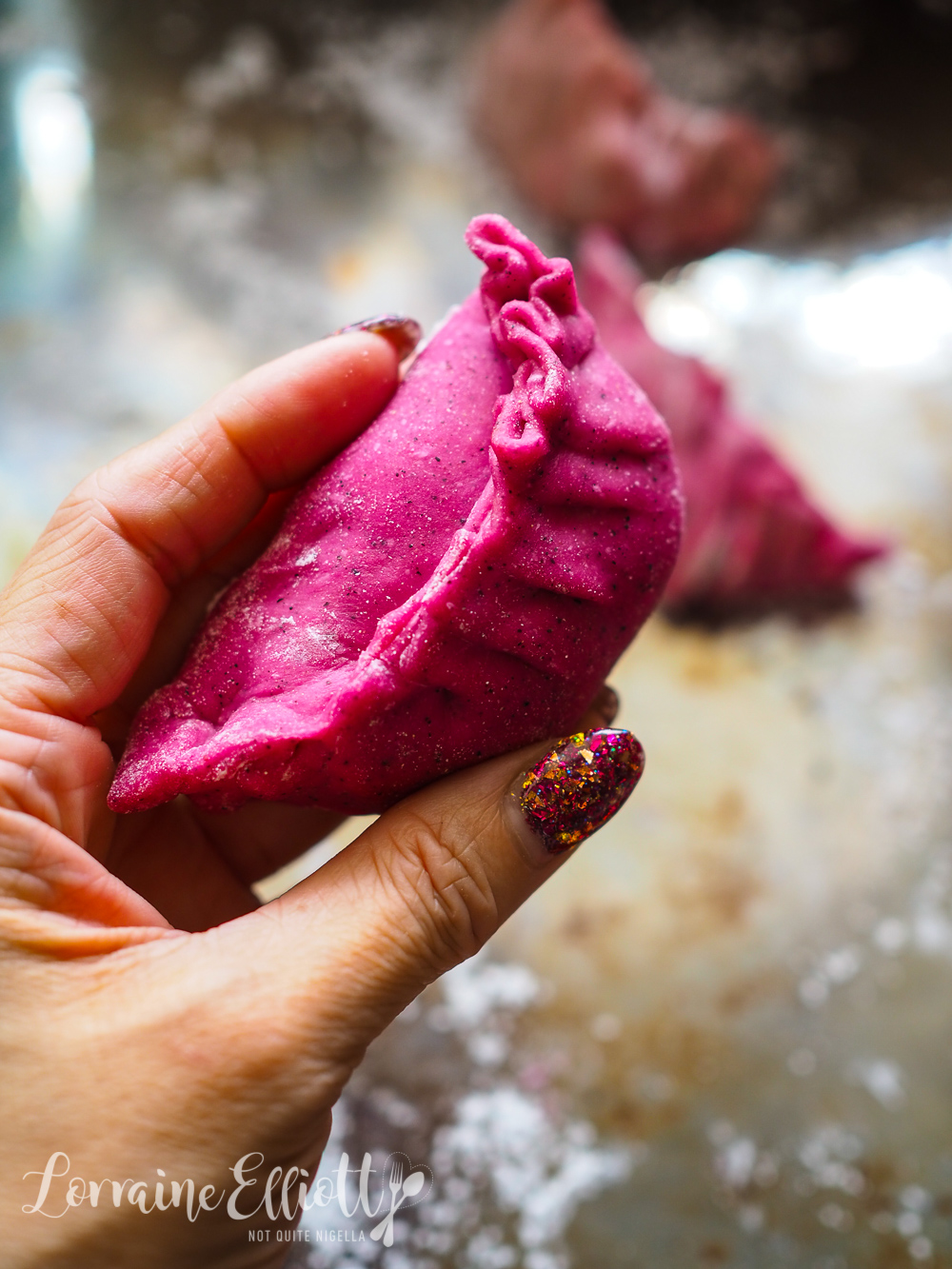 This year Chinese New Year falls smack bang in the middle of the Australia Day long weekend on the 25th of January so in between everything we will have a Chinese New Year dinner with my parents. The foods that you tend to eat during CNY are lucky ones like pork (luck, wealth, honesty and general prosperity), whole fish (completeness), noodles (long life) and fruit like mandarins (fortune as they look like gold ingots). Basically lots of delicious food is lucky and it's a good excuse to go out for dinner. 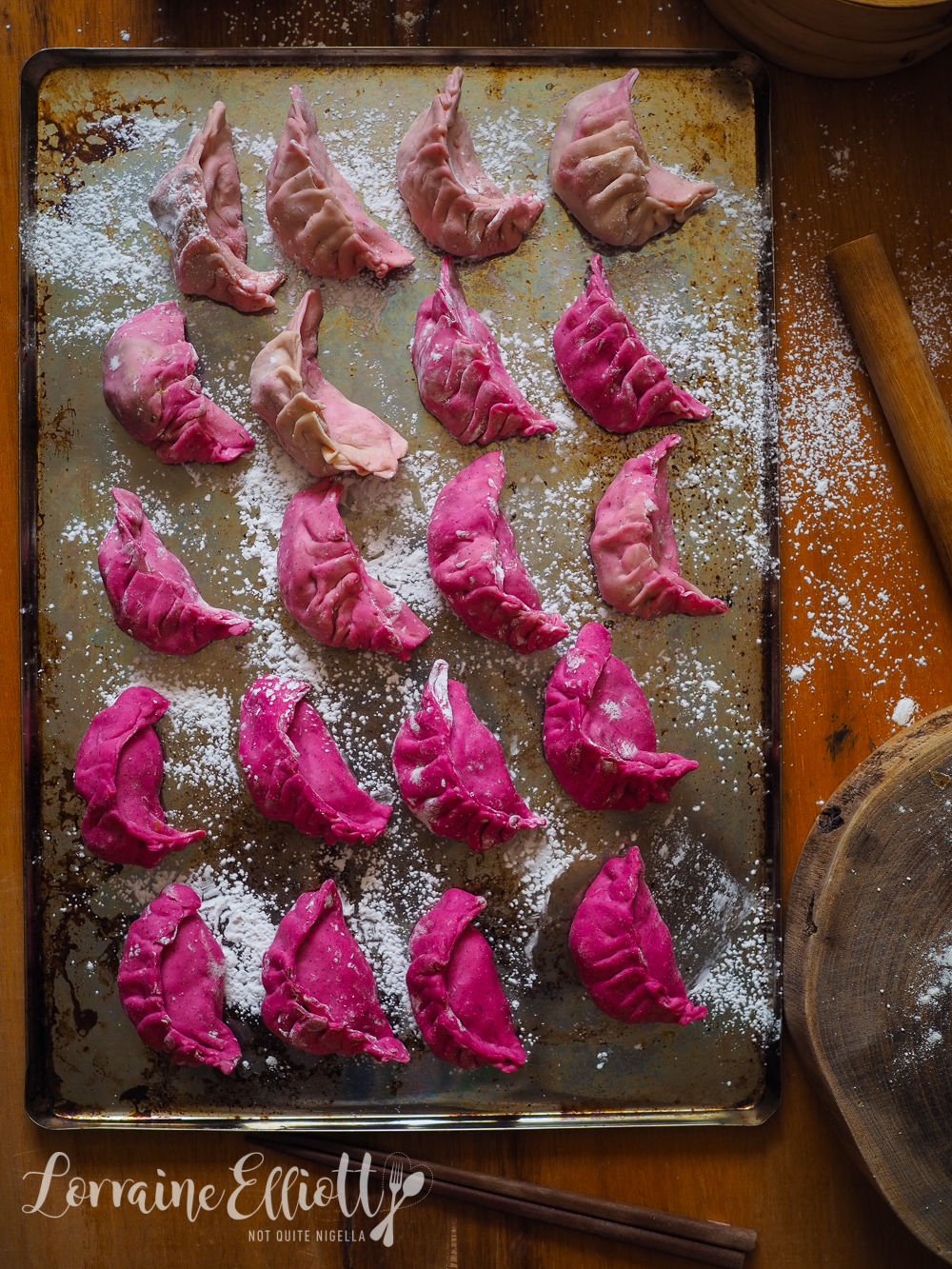 We had a Chinese dinner with my sister Blythe before she flew out the other week. She has this fixation with one food when she is in Australia: lamb. She has to order it at every meal as she says it is expensive where she lives (previously London, now Singapore). 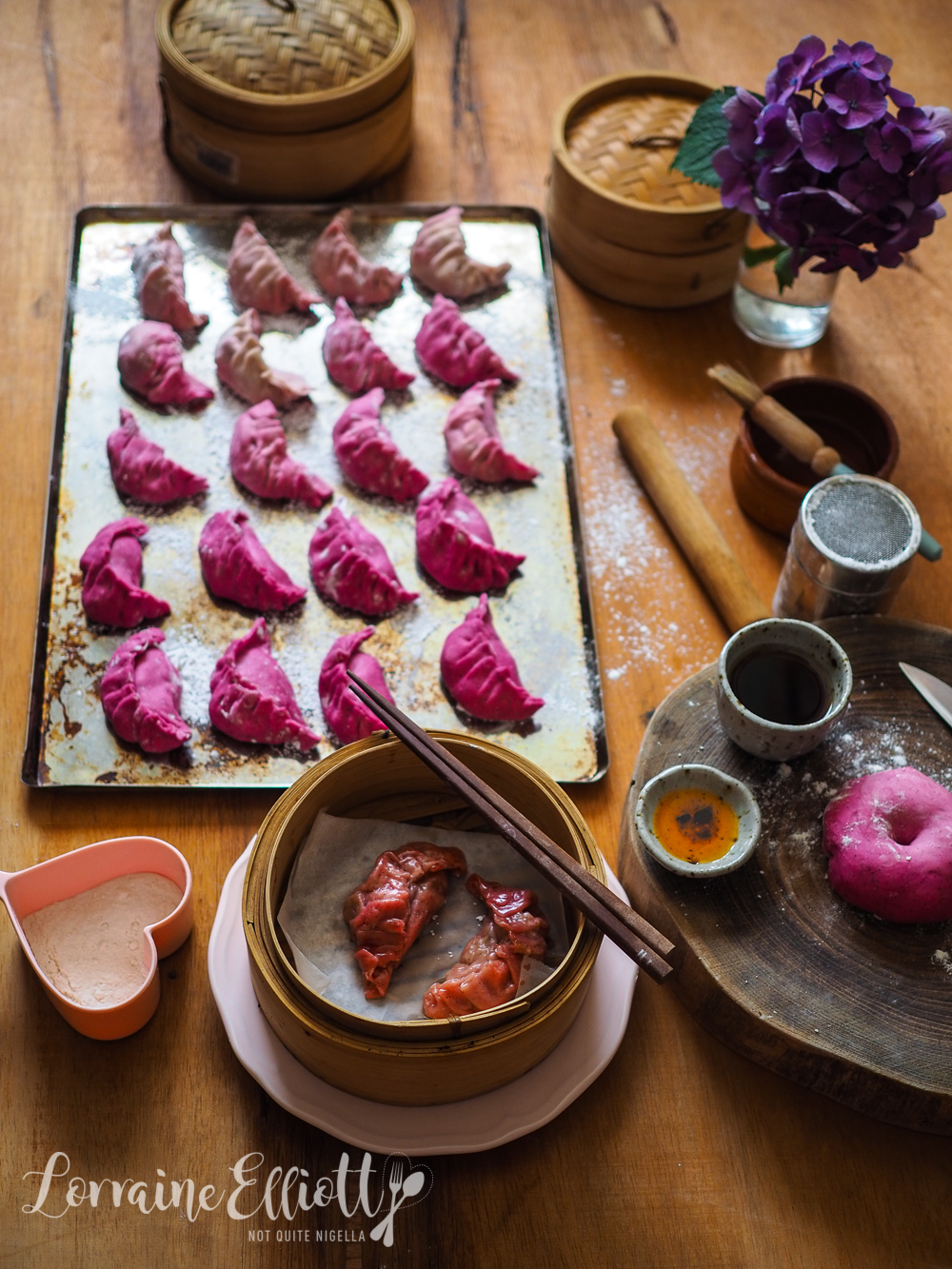 That got us talking about our food middle names which would be our favourite food. Hers would obviously be "lamb" and my father's would be "rice". My mother said hers would be "noodles" while Mr NQN's would be "fruit salad". As for me, I am Lorraine "Pickles" Elliott. It is a hard for me to pick a favourite food as I love so many foods and it could have also easily been noodles or fried chicken. The main reason why it is pickles is because it's Mr NQN's nickname for me too as Pikku means "little" in Finnish and it just evolved to my absolute love of pickles! Or maybe that should be dumplings?

So tell me Dear Reader, what would be your food middle name? Are you going to celebrate Chinese New Year? Do you have a "lucky" food? 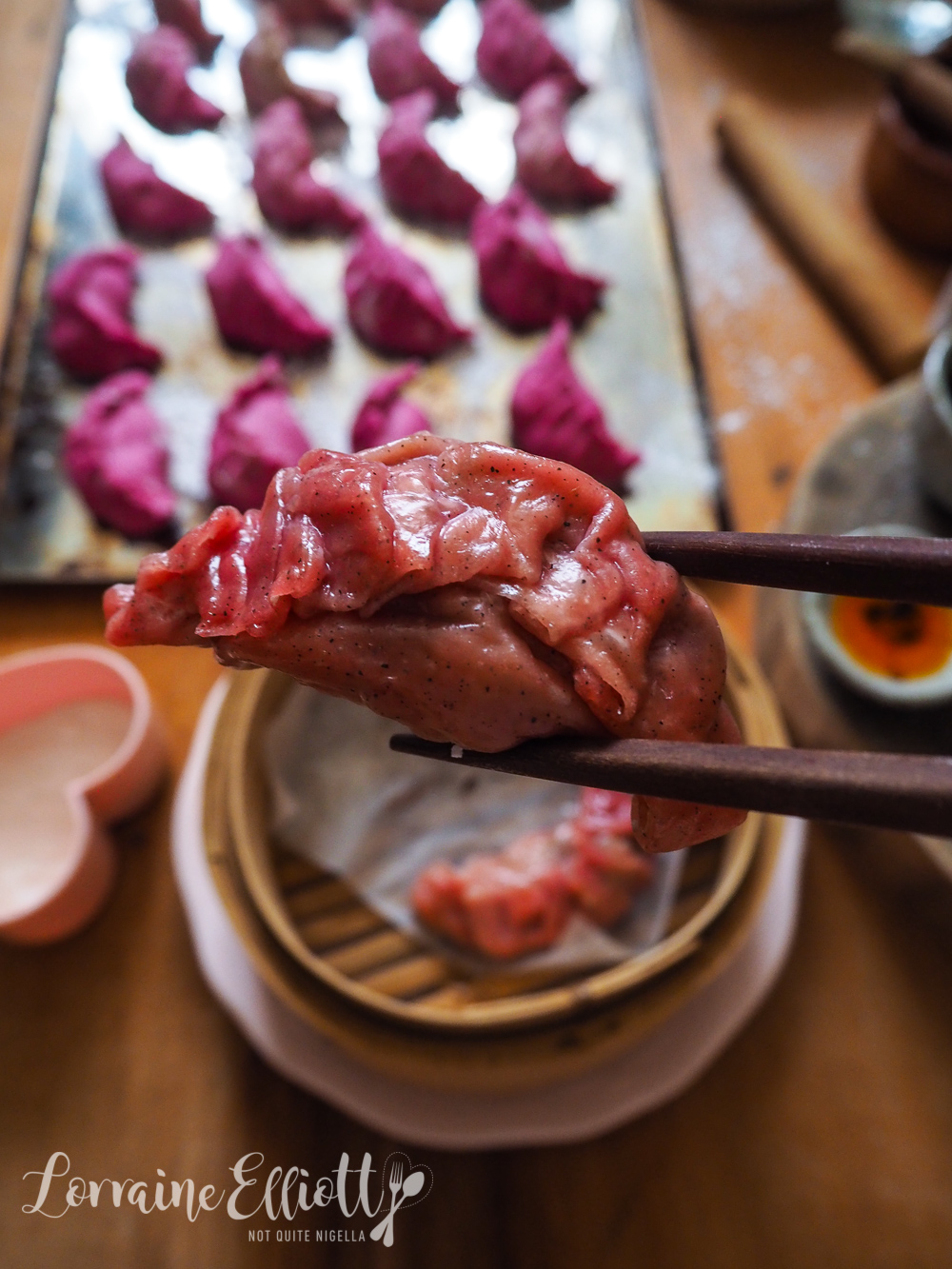 Dragonfruit powder can be purchased by weight at scoop stores like Source. Keep it in an airtight container or jar as it absorbs moisture from the air easily.

Step 1 - Make the filling and then refrigerate (you can make this a day ahead of time). Place the pork, prawns, onions, ginger, soy sauce, sesame oil, cornflour and white pepper into a food processor and make a smooth paste. Refrigerate until needed.

Step 2 - Make the dumpling skins just before using them (you can dust them with cornflour and layer them on top of each other but they're best used straight away). Take three bowls and add a quantity of flour in each one. Have three cups with hot water. Divide the dragonfruit powder into the three cups: with the first add 1 1/4 tablespoons, 1/2 tablespoon in the second and 1/4 tablespoon in the third one and add the liquid to the flour and make three doughs each with different intensities of pink. Knead each for 3-4 minutes until you get a smooth dough. Cover and rest for 30 minutes. 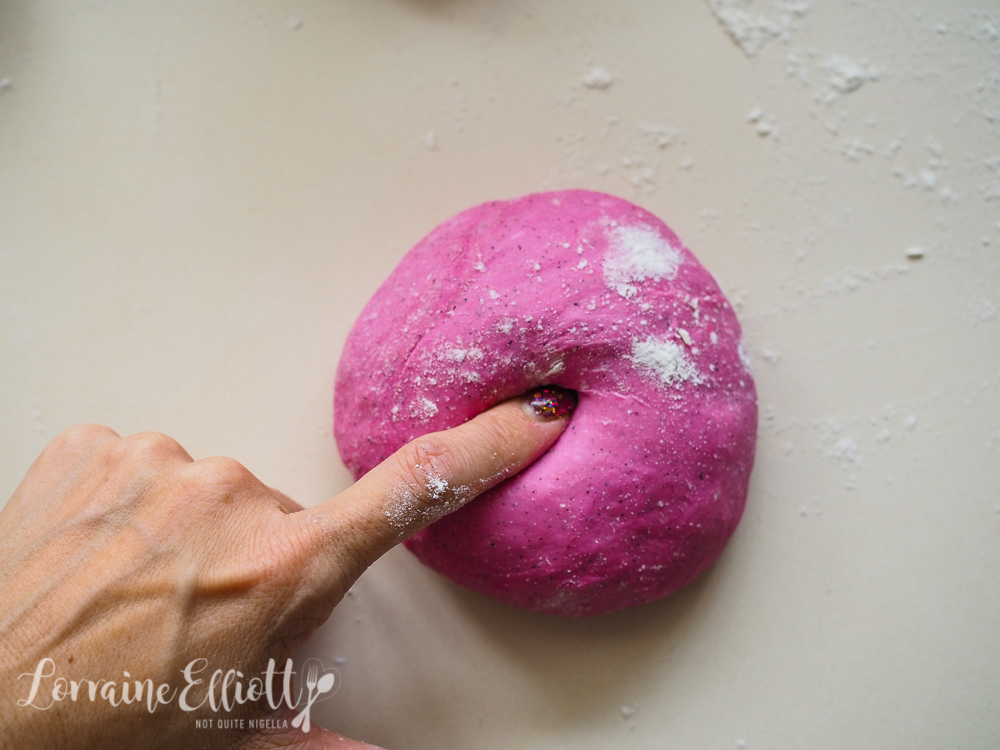 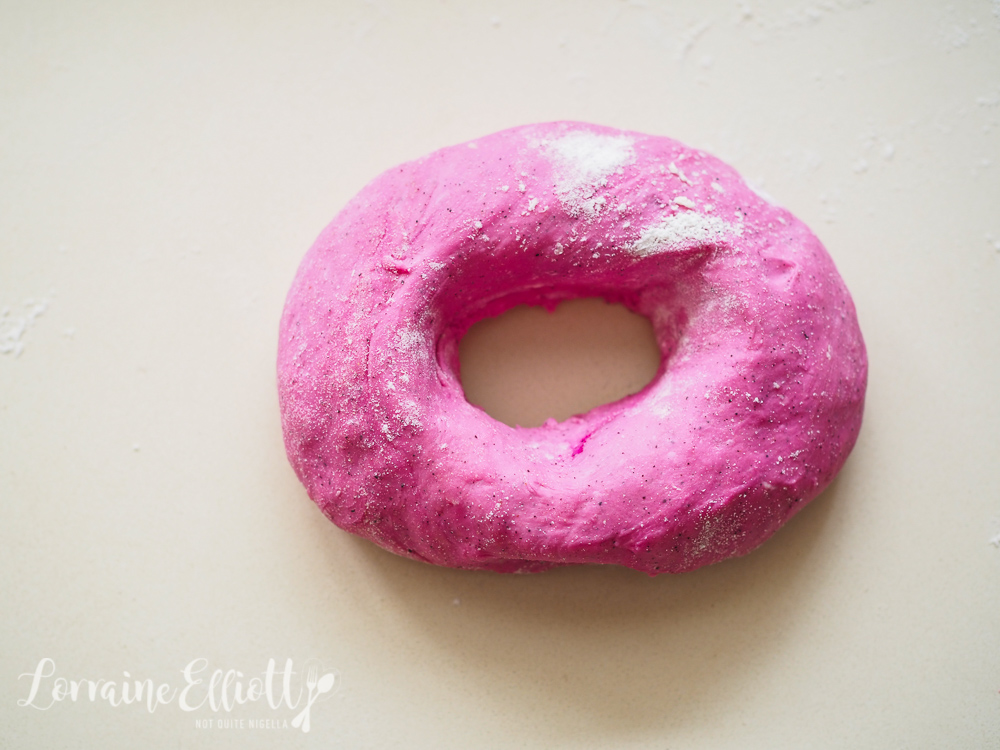 Expanding it to a ring shape 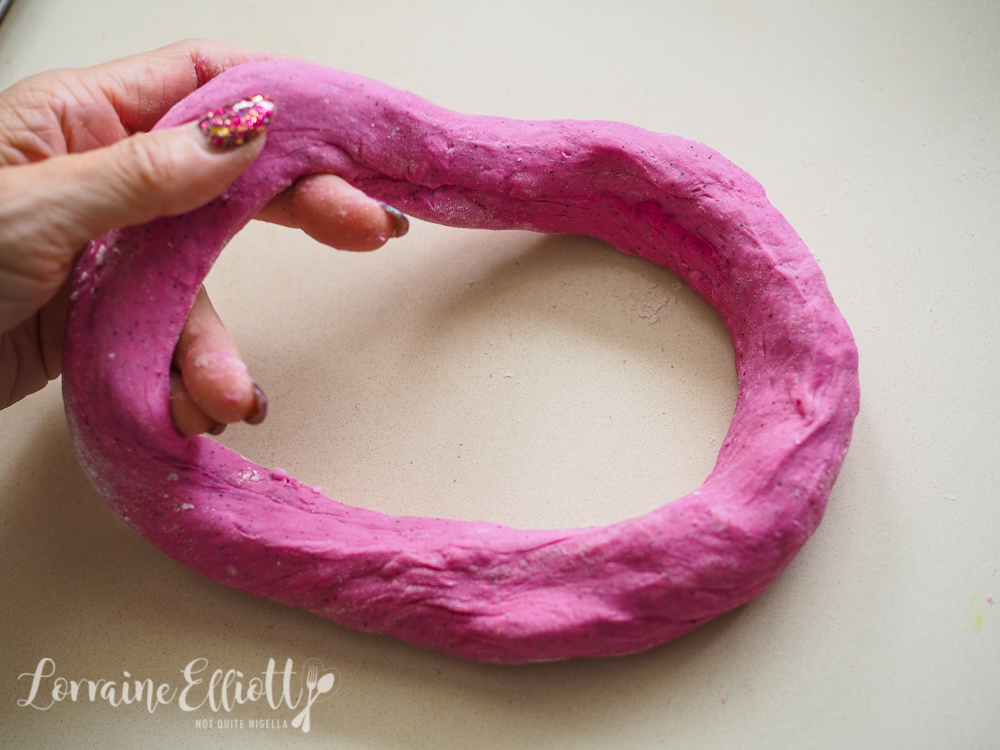 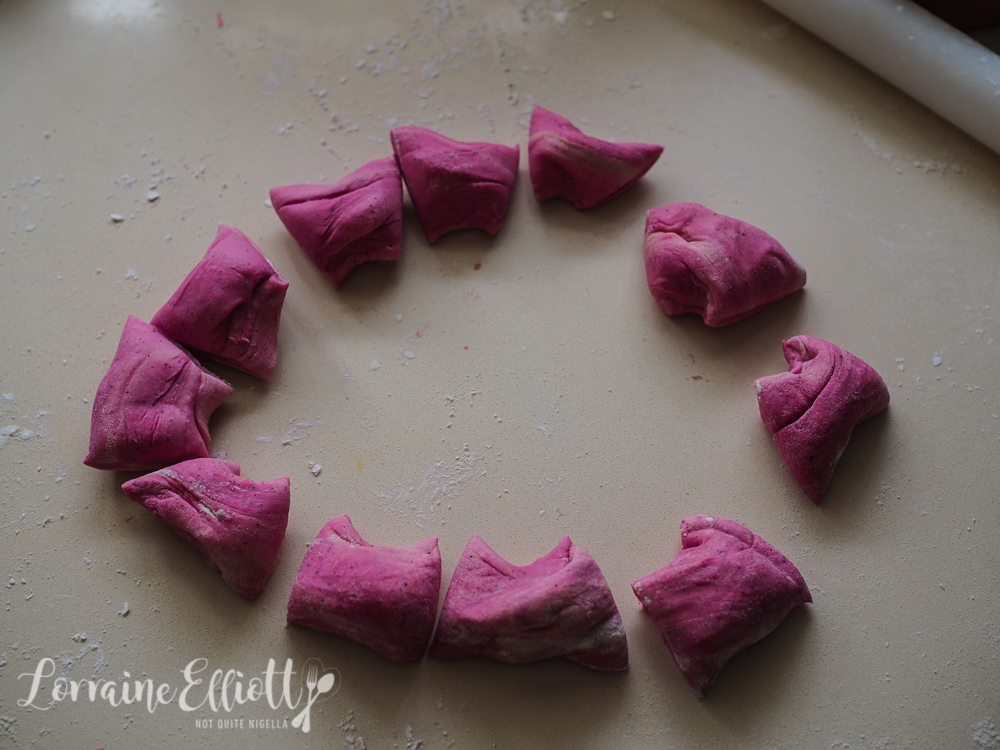 Step 3 - Flour a large tray. Take each ball of dough and poke a hole in the centre. Stretch out to a ring and cut into pieces-they need to be big enough to hold the filling and pleat-my dough balls were 25g/1oz each. Roll out into large circles, around 10-12cms large making sure to make the edges a bit thinner than the centre (don't worry if you don't get it straight away, this takes practice). I roll out each piece of the dough once and then rest it while I roll the rest and then go back and roll them further. 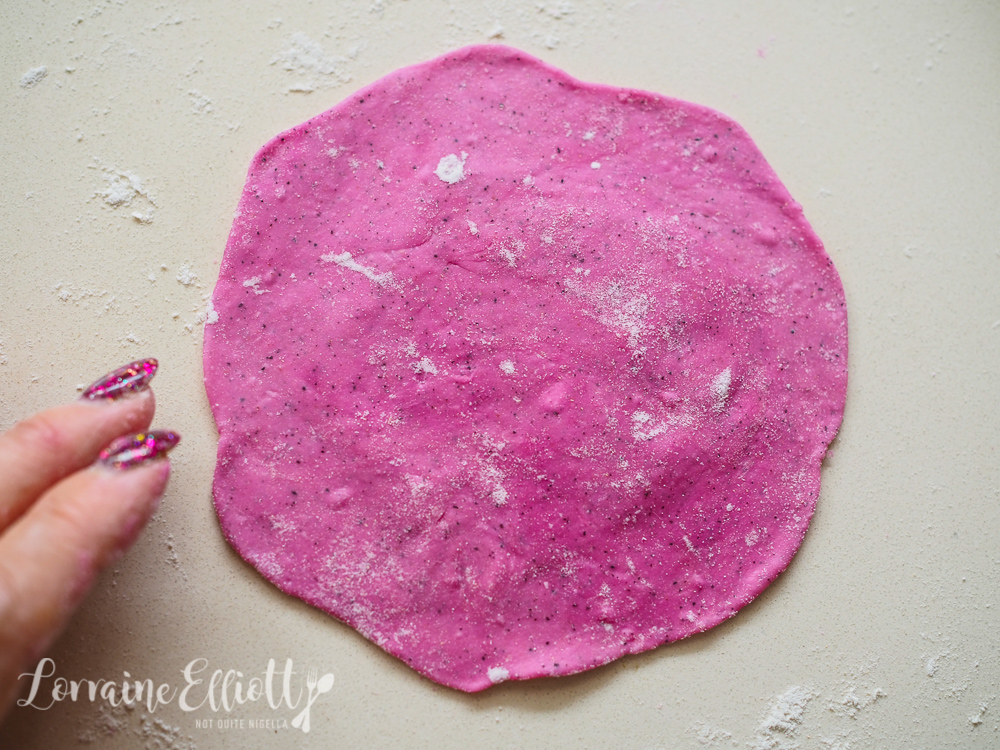 Rolling out the dough-note thinner around the edge 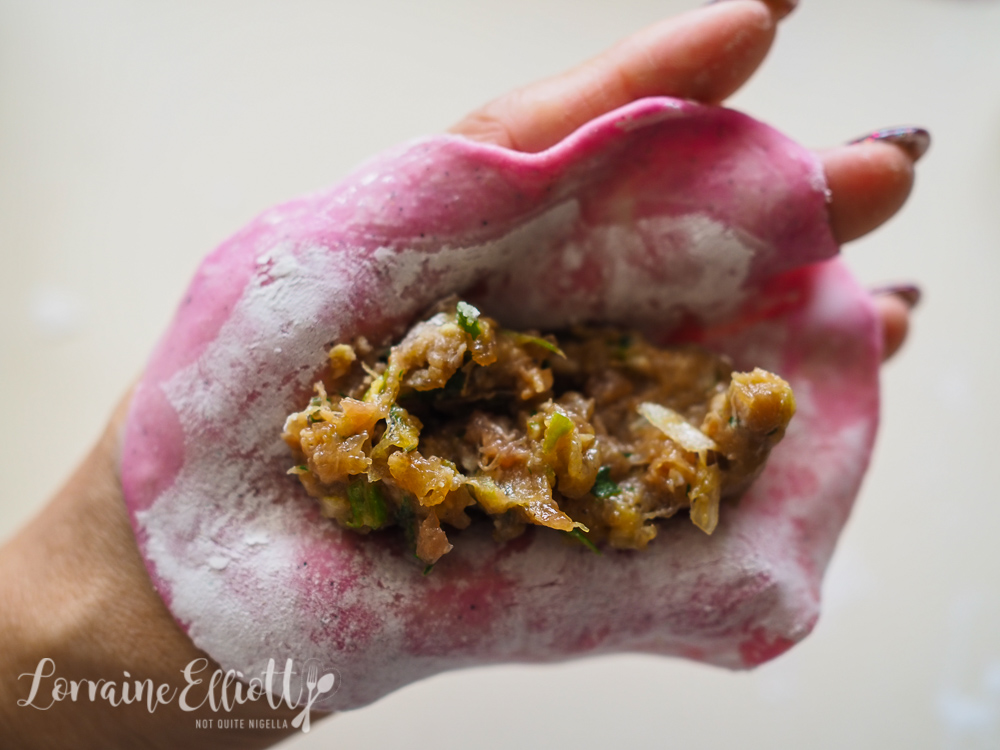 Placing between the thumb and forefinger, adding filling and wetting one edge 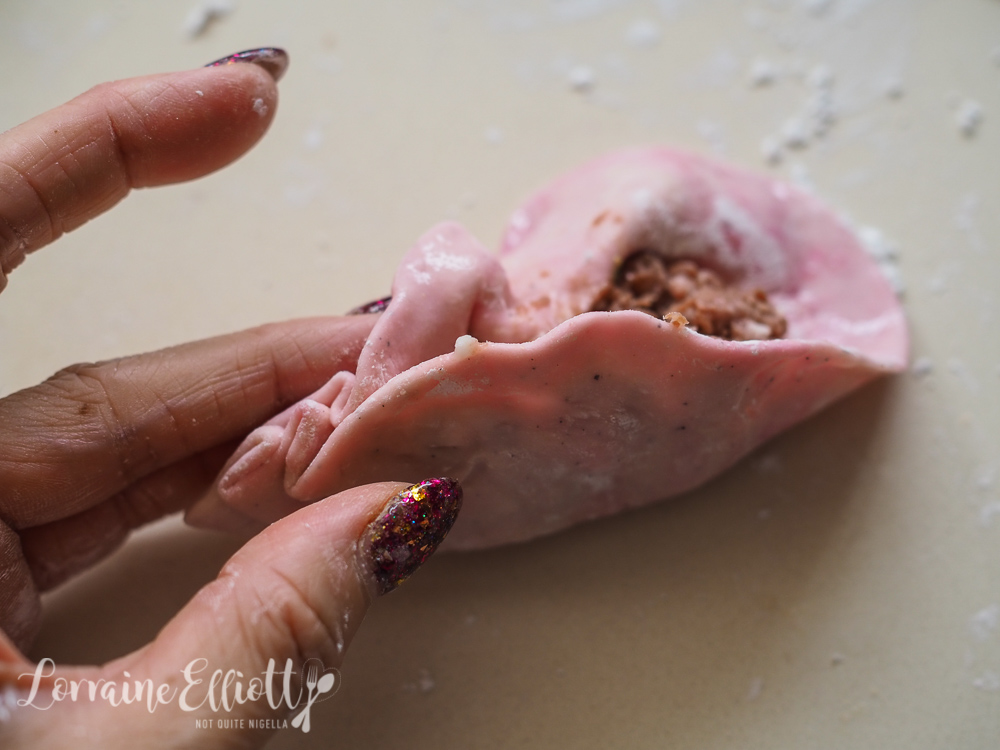 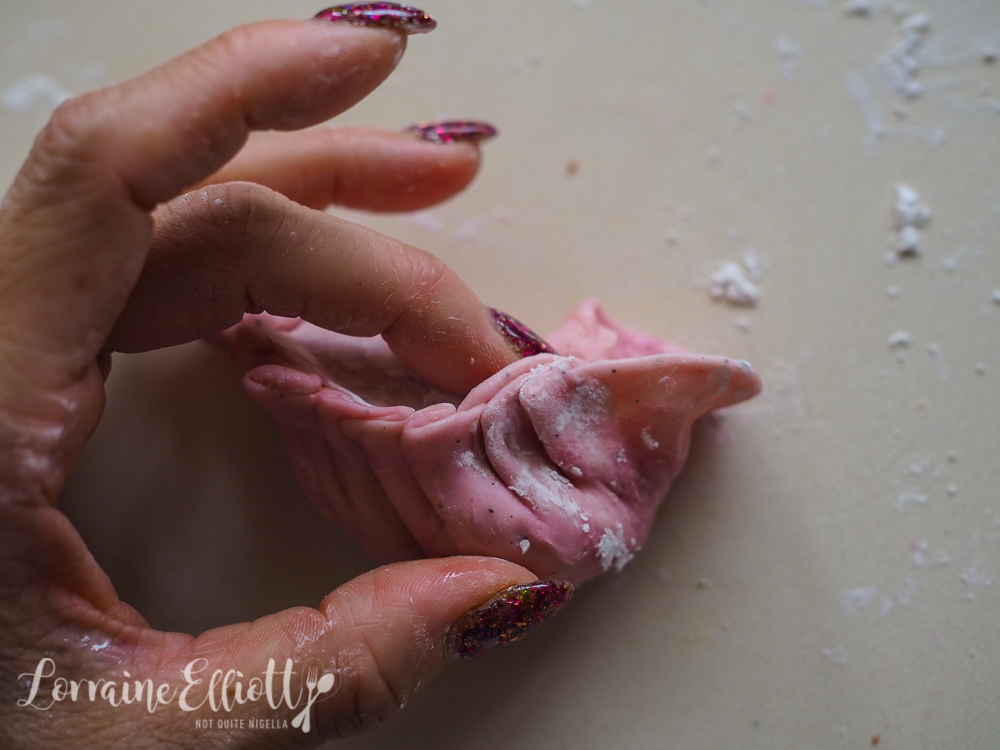 More pleating, the pleats will form a natural curve 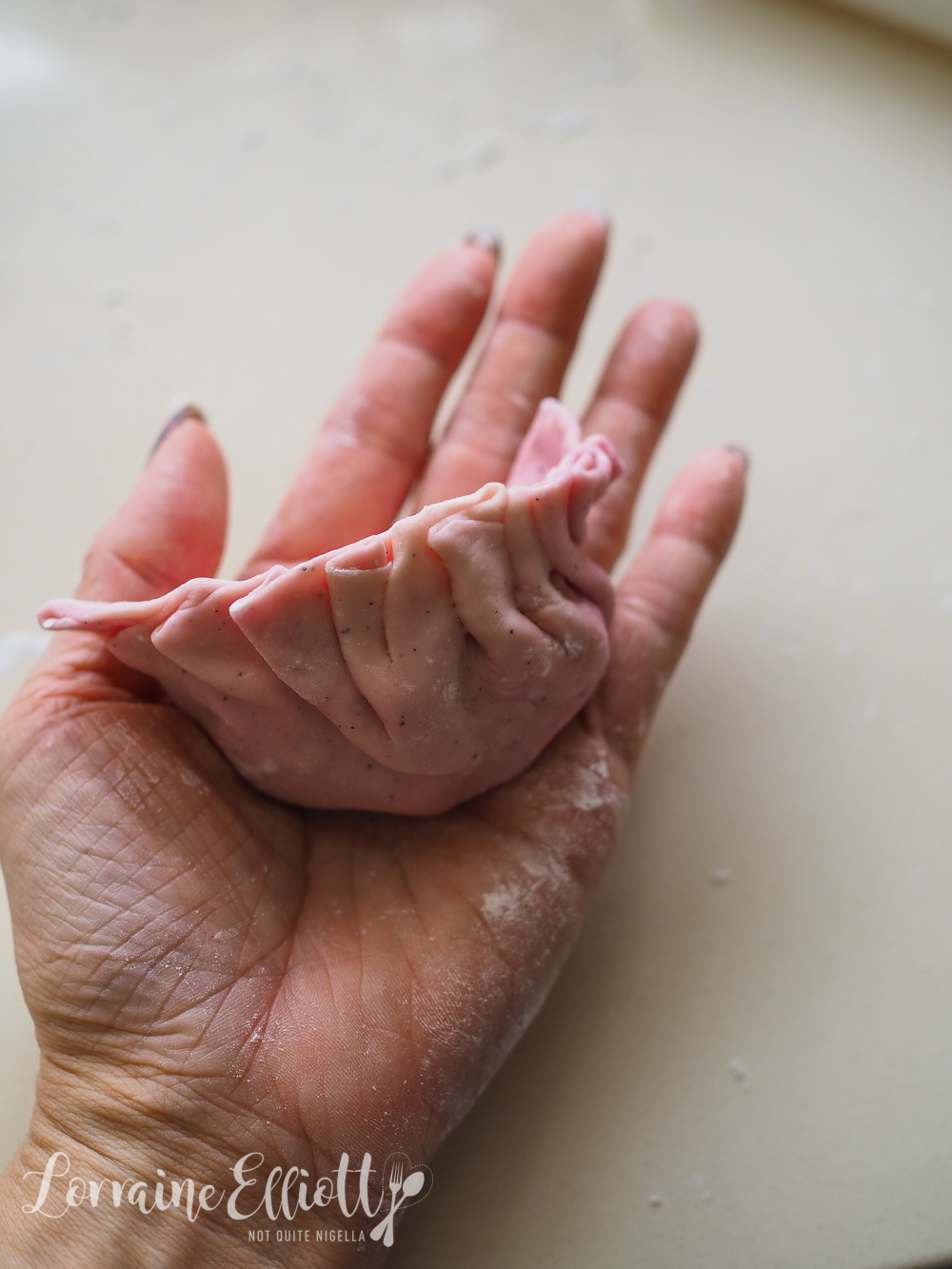 Step 4 - Fill with a heaped tablespoon of filling and cradle it in your less dominant hand between the thumb and forefinger. Brush with water around one side and then pleat. The pleating process is that your right hand or dominant hand pleats while your left hand presses down the pleat. Again practice makes perfect for this. Place on the floured tray and repeat the pleating process. 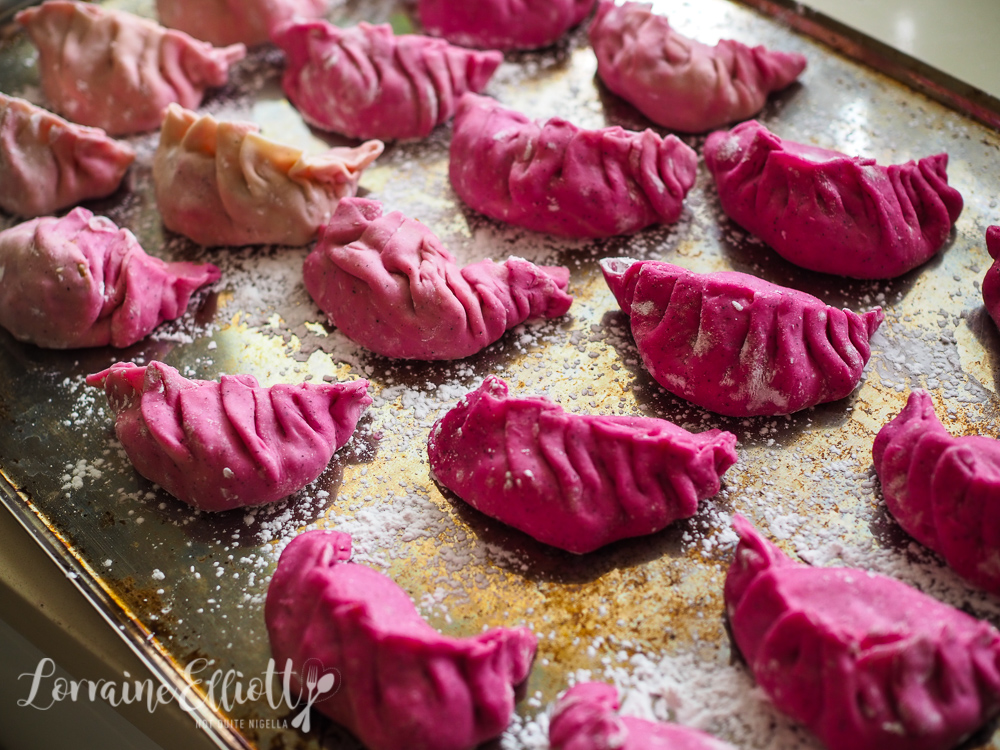 Step 5 - Line steamer baskets with parchment and place over a pot of simmering water. Place the dumplings making sure that they're not touching each other. Steam for around 7 minutes-the filling should be firm rather than soft when they are cooked. 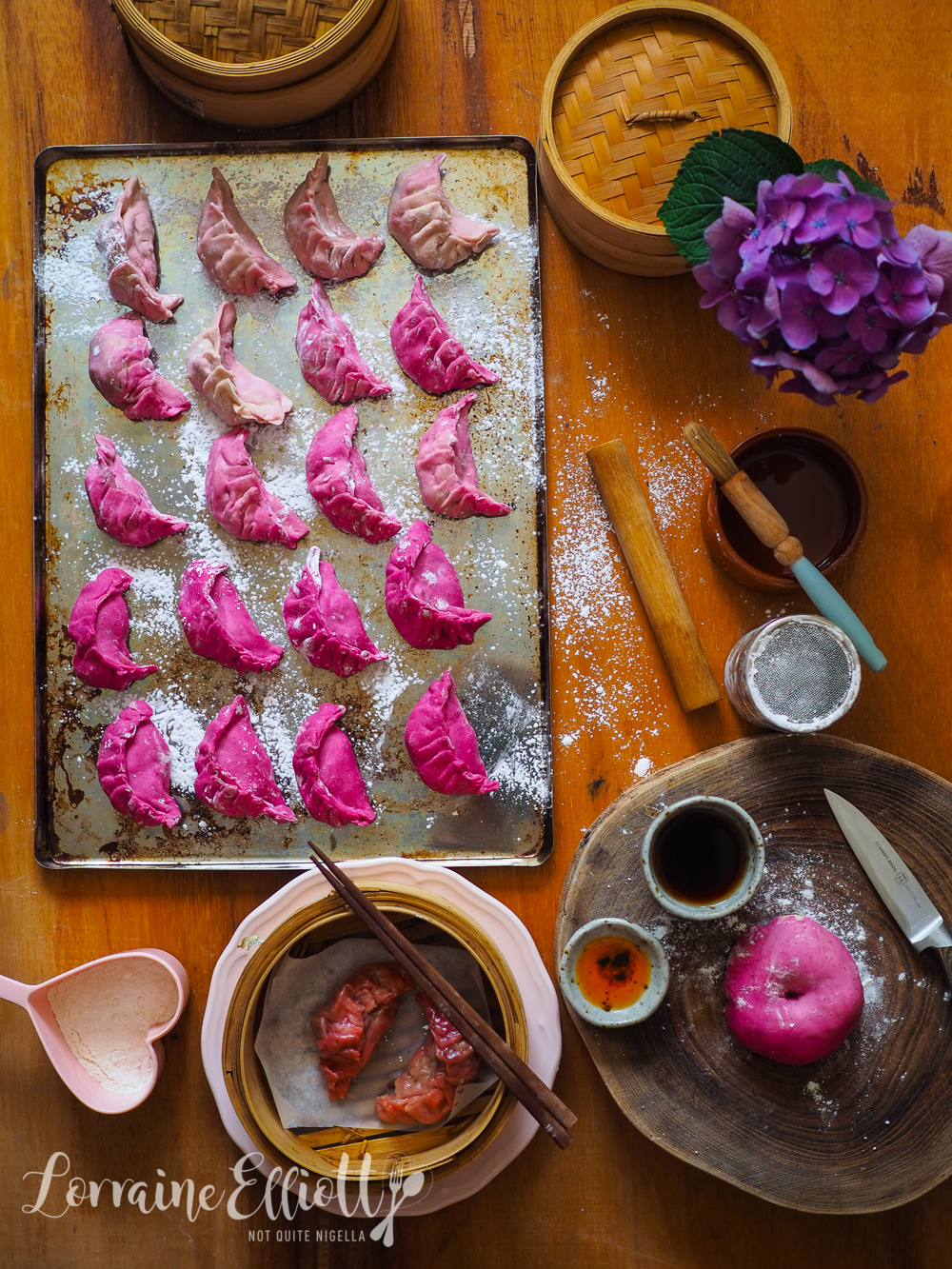