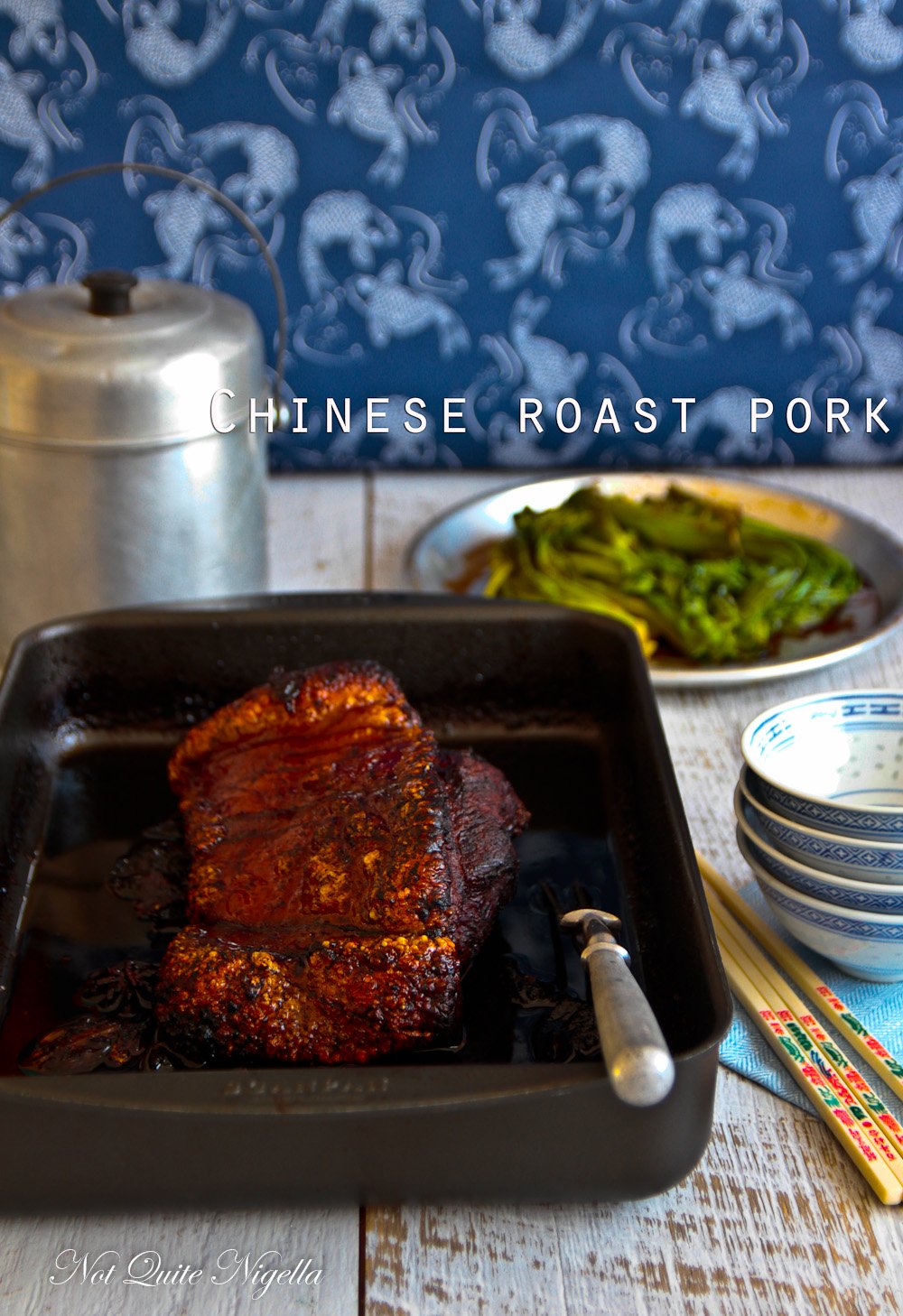 On a weekend there's no better way to stay warm than with the oven on. Slow roasting is one of the tastiest way to deal with certain cuts and for the pork shoulder, it is the very best treatment to get moist pork and a heavenly crackling. This pork shoulder is infused with Chinese flavours and spices giving your regular pork roast a point of difference.

Although I tend to do things at breakneck speed, tapping my feet with eyes darting everywhere, sometimes it's nice to have a break. And that's when I like to do a bit of slow roasting. It forces me to stop and reflect and put a pause on my frantic scurrying around.

It was while I was roasting this pork shoulder that took four hours in the oven that I finally sat down with a cup of tea and opened up my facebook page. I came upon a story that a friend had put up on her facebook page. Do you remember the actress Tippi Hedren? She was one of Hitchcock's muses and is also the mother of Melanie Griffith and grandmother of Dakota Johnson. Well did you know that she played a huge part in the nail industry via her help with Vietnamese refugees? Forty years ago when she visited Hope Village a Vietnamese refugee camp in Northern California she saw that the women there needed help finding a vocation.

The 20 or so women there were dazzled by her nails. In her hopes of helping them find that would allow them to work with a small level of English she flew in her personal manicurist and enlisted the help of a local beauty school to teach them how to do manicures. And the rest they say is history with so many salons now being owned by Vietnamese, some of them direct decedents of the original refugees! I loved reading about this actress who I only knew a little about and her insight into a situation created such a difference for people that needed a helping hand yet to many she would be known just as the "Hitchcock Blonde".

See what interesting facts you can read when you have a bit of time on your hands? The other benefit to slow roasting or slow cooking items is that you can cook those slightly less prime cuts and transform them into something spectacular. I have a particular love for non prime cuts. I don't know why but I don't go for the lean, trimmed cuts like an eye fillet of steak. Give me something with a bone or something marbled for more flavour. 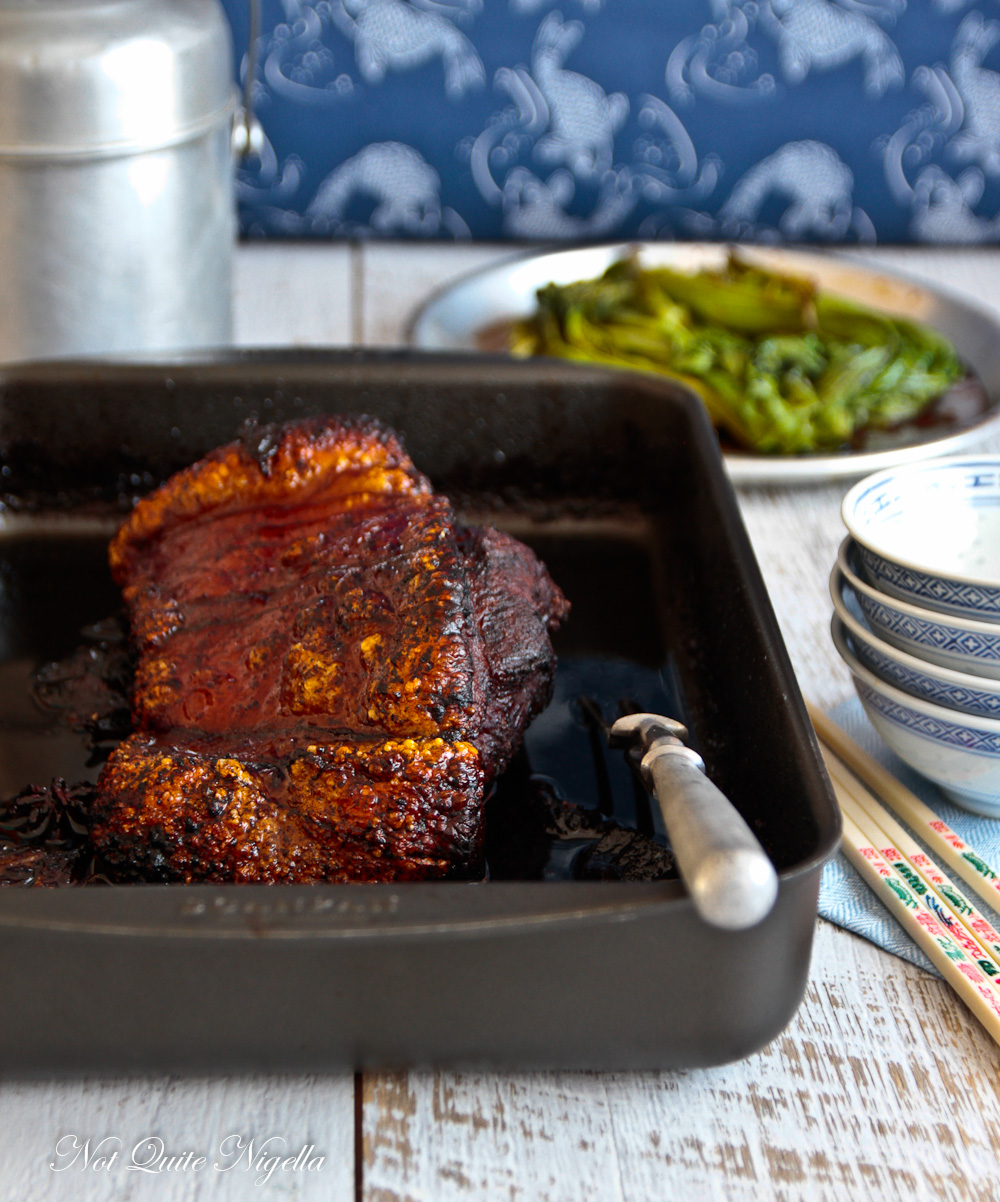 Pork leg is more popular than shoulder (or the pork butt or Boston Butt in America even though it has nothing to do with a bottom) because it is lean but the leg's leanness often tends to make the pork dry and dry pork is the devil (I'm so dramatic). The shoulder however is perfect for roasting because it gives great crackling and the meat's toughness gives itself over to slow roasting so that it becomes tender while staying moist inside with the extra layers of fat. And did I mention it gives great crackling which is really one of the main reasons to make a pork roast? Crackling! CRACKLING!!

Sorry I got a bit carried away there. To add a bit more flavour I decided to slow roast it with some Chinese flavours just to make something a bit different. Can I just say that this smells wonderful when cooking and tastes even better in the eating? Even though you don't need to marinade the pork, the flavour seeps through the meat beautifully and you end up with a crunchy crackling and a flavoursome, tender pork roast that pairs well with vegetables. I ended up roasting some choy sum with some of the sauce in the oven and served that along with some rice.

So tell me Dear Reader, do you have a favourite cut of pork? Do you tend to go lean or do you go for the non prime cuts? Do you make crackling? And did you know that tidbit about Tippi Hedren? 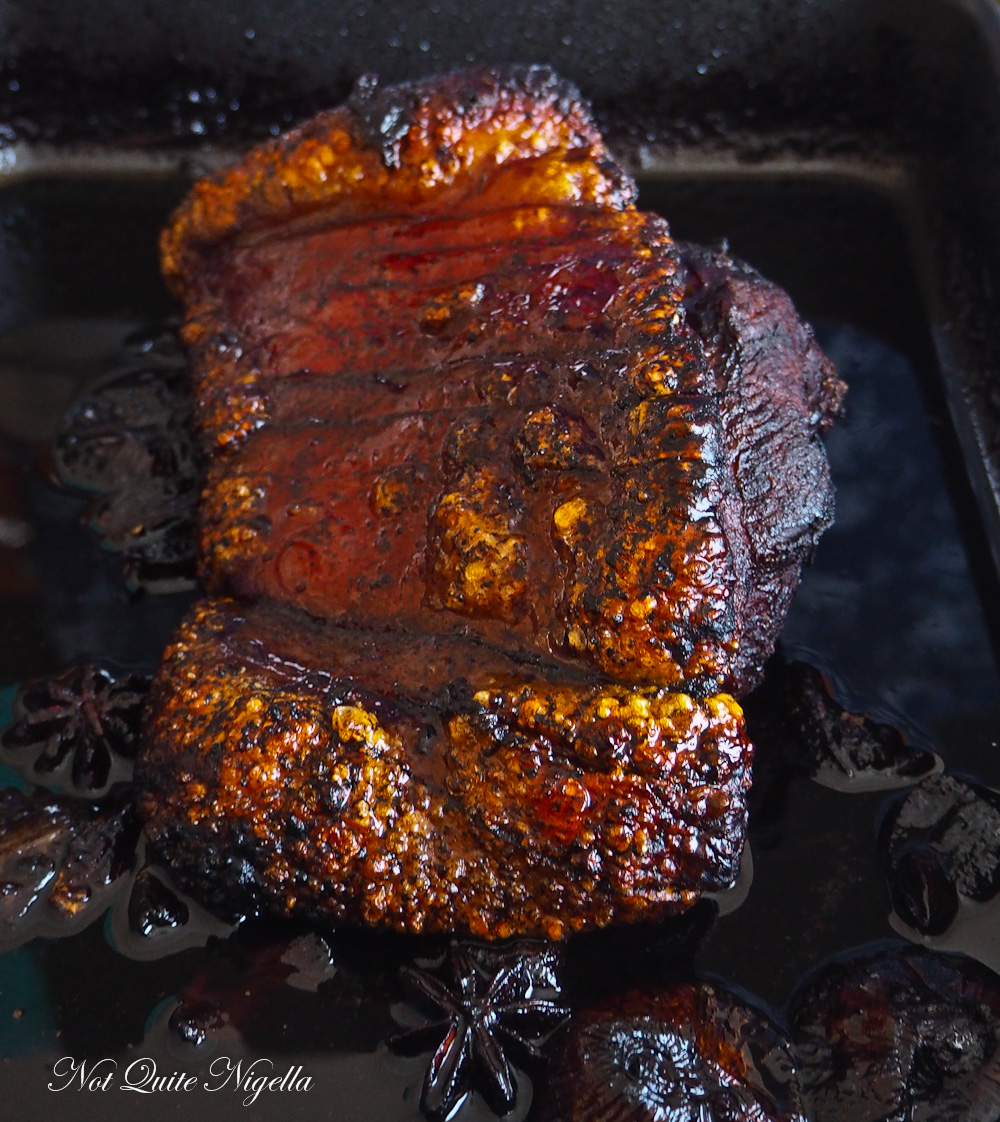 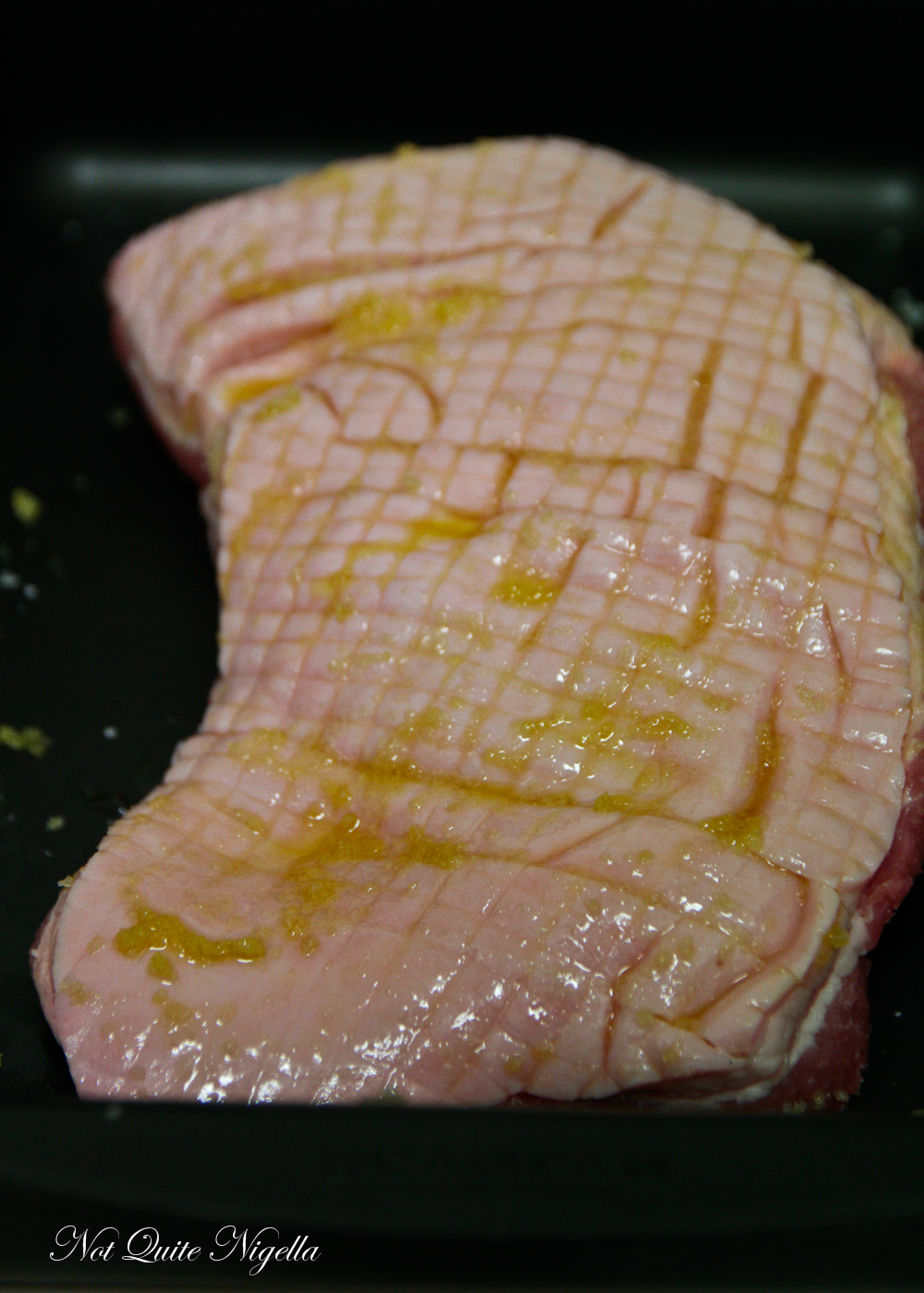 Step 1 - The night before, remove the pork from the packaging and press down with paper towels on top to remove any moisture. Store uncovered in the fridge to dry out the skin (you can wrap foil or cling film around the meat so that it doesn't dry out). If you don't have time to do this, don't fret, you can still get crunchy crackling (see end of recipe). 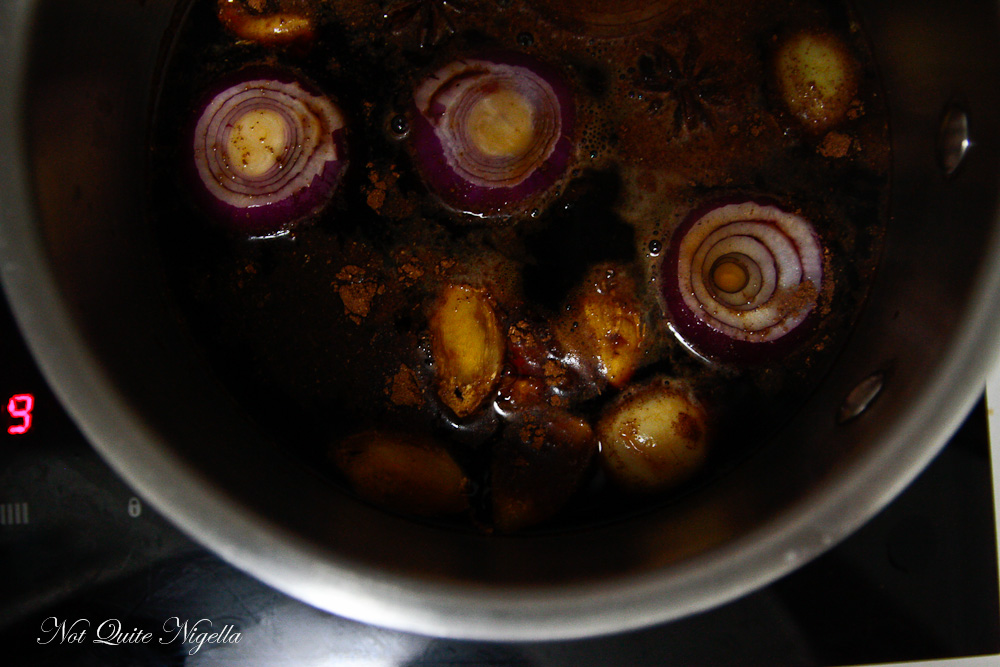 Step 2 - The next day sprinkle salt and oil over the scored rind and rub into the rind. Preheat oven to 260C/500F and place the pork laying it out flat in a deep sided baking tray. Roast for around 30 minutes or until the skin starts blistering. Meanwhile while it is cooking, place the five spice, soy sauces, water, brown sugar, onions, garlic and star anise in a saucepan and heat until the brown sugar has dissolved. 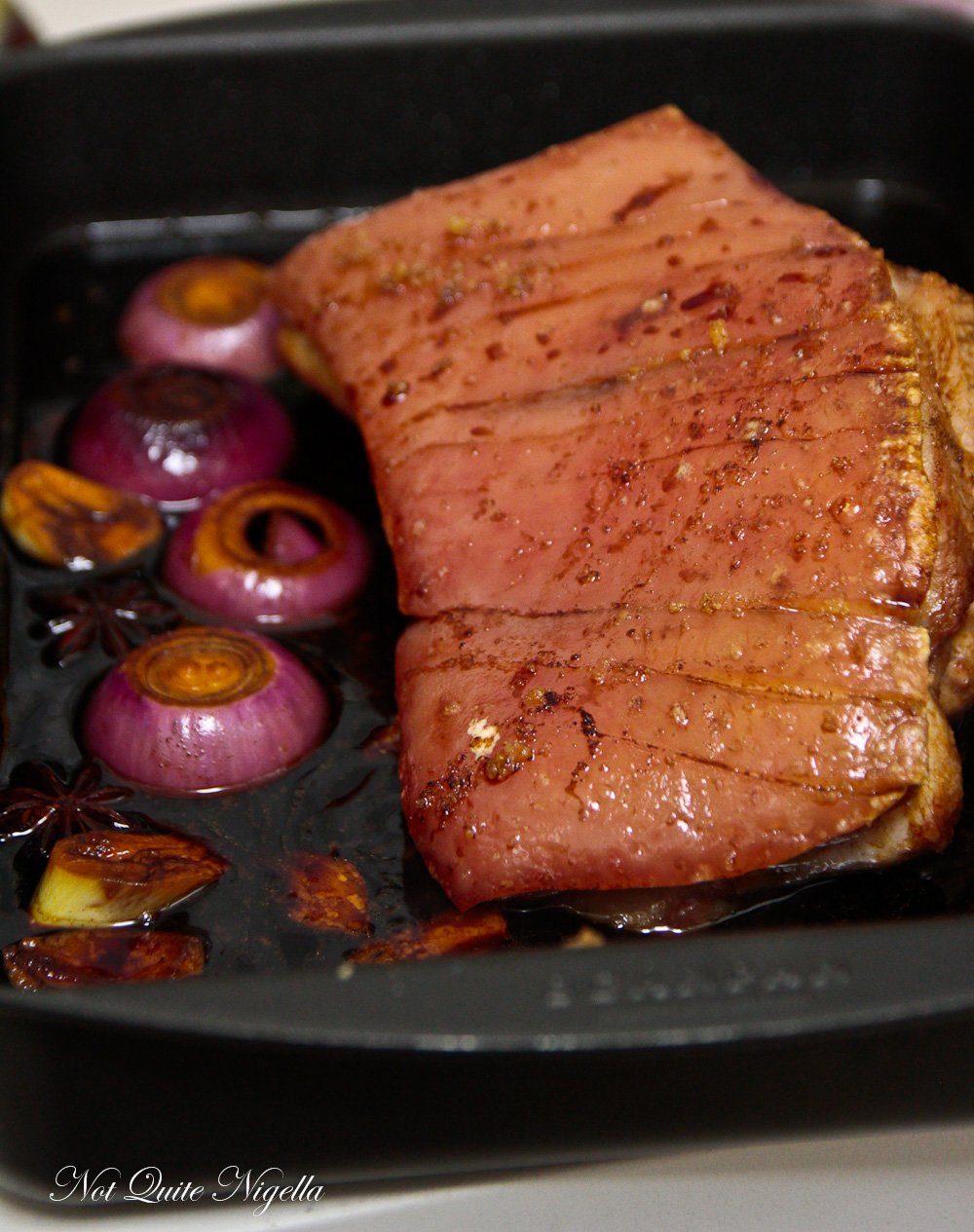 Step 3 - Reduce heat to 140C/284F. Pour the sauce over the pork and cover the baking tray with foil and scrunch to seal. Roast for 3.5 to four hours basting the meat and rind once an hour. 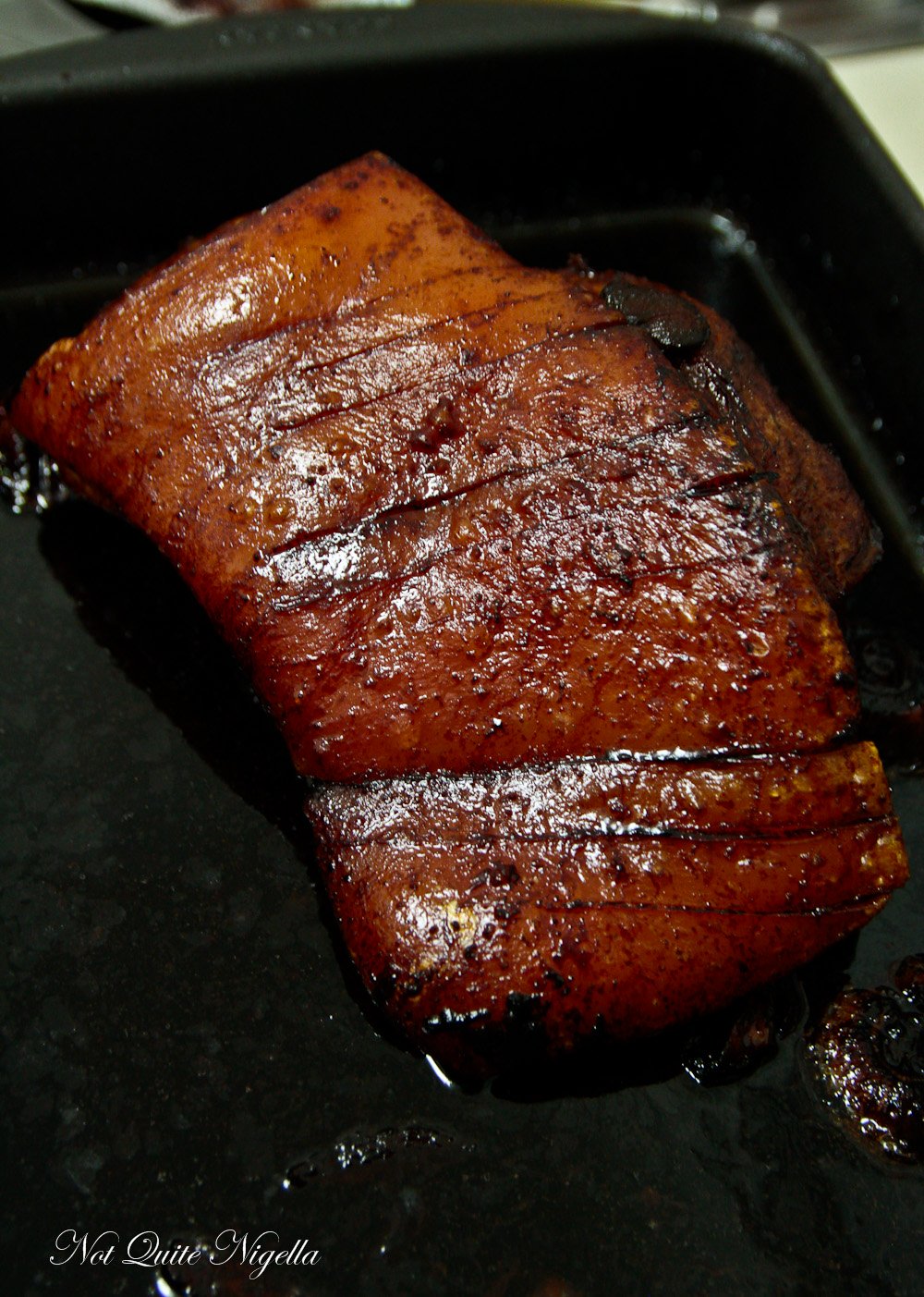 Step 4 - If you want super crispy crackling and it didn't crisp up when you first put it in the oven, remove the pork from the sauce and place on a foil lined tray. Turn the oven back up to 260C/500F and roast for 8-10 minutes watching carefully that it doesn't burn because of the sugar in the sauce. The rind should become puffy and crunchy. 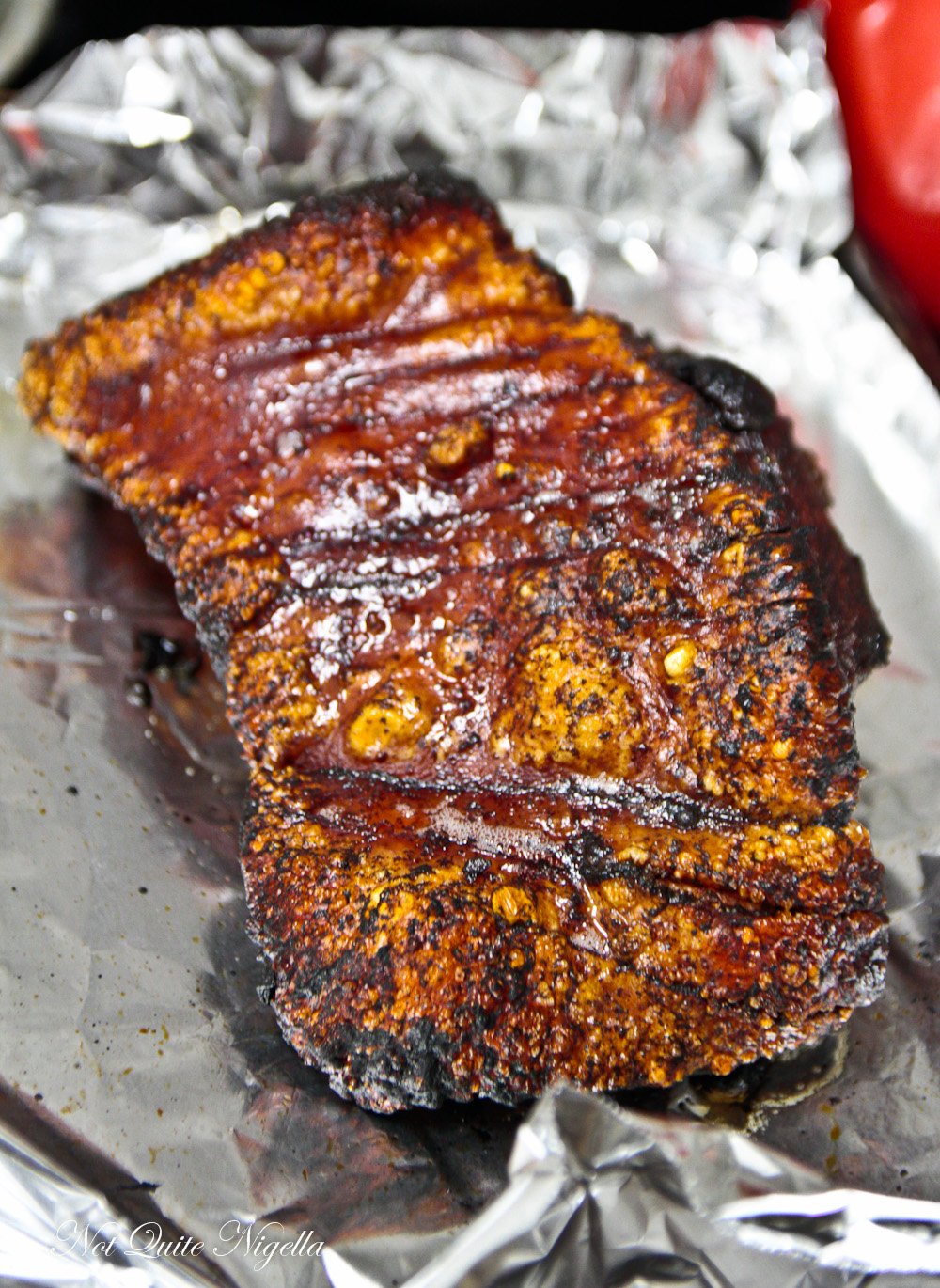 Step 5 - To cook the choy sum, wash the vegetables and lay them out on two baking trays. Spoon over some of the sauce and roast for 12-15 minutes until wilted and cooked. Serve the pork and vegetables with rice. 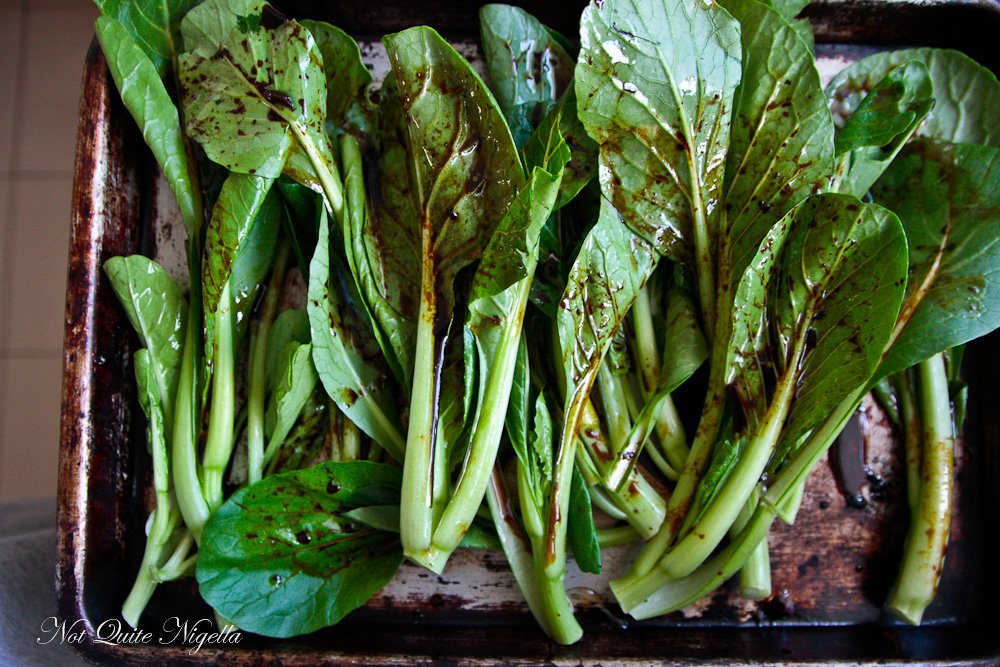