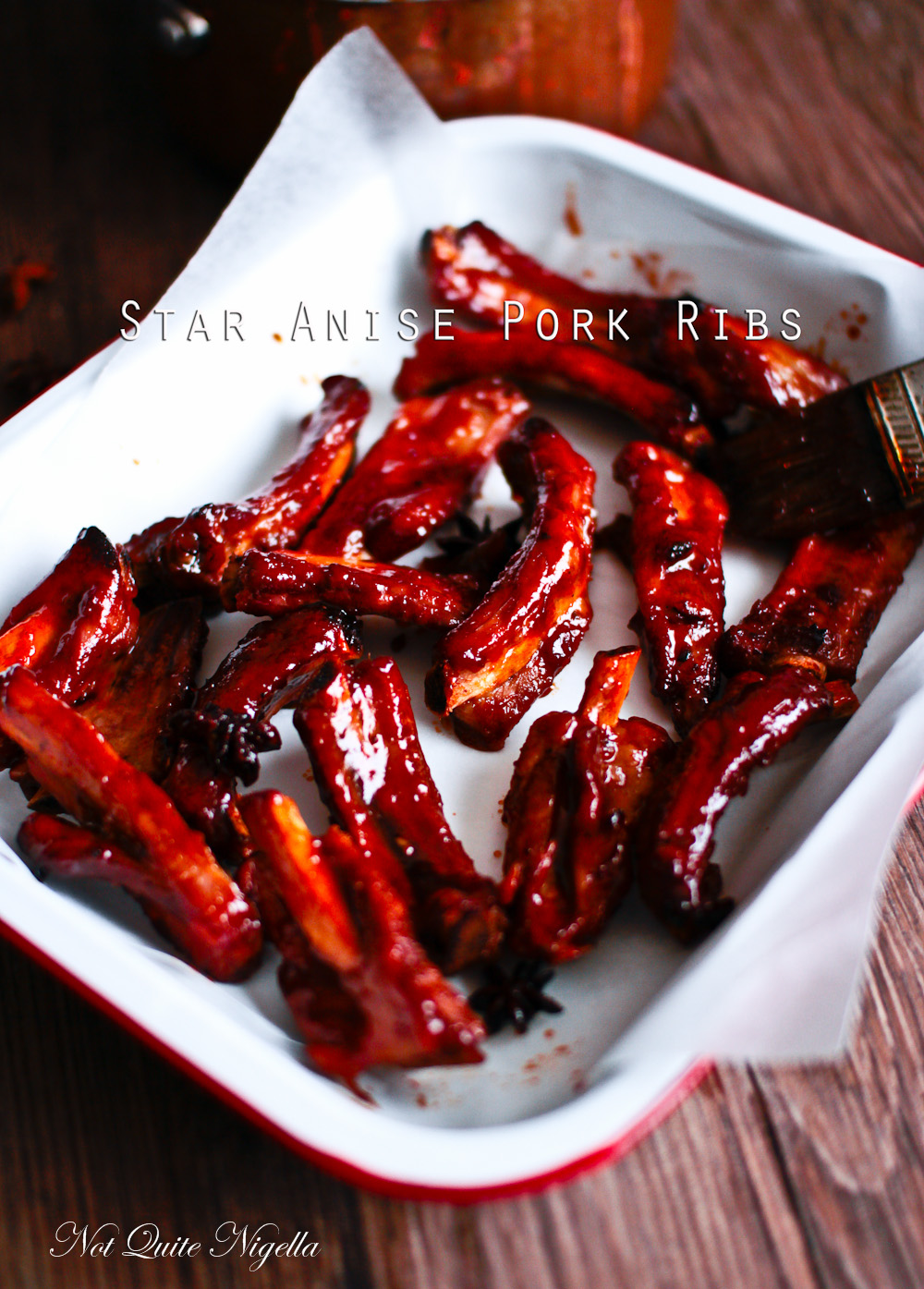 As absurd as it sounds, I dreamed about these ribs before I made them. I evisaged biting into some sweet, sticky, saucy ribs. The pork ribs were carmine in colour and has a glossy coating while the meat easily came off the bone. It's just a shame that I didn't dream up the recipe to come with it! But after some experimentation, as the saying goes, dreams do come true. May I present a recipe for gorgeous glazed Asian style baby back pork ribs!

Now I will admit that the method does sound a bit odd. And certainly on food forums there is a lot of debate about boiling ribs. A lot of people think that this is a big mistake and advocate baking ribs for 3-4 hours on a super low heat. I was going to try cooking them in a pot on the stovetop for an hour in a flavoursome sauce. The advantage to simmering them on low in a sauce is that the sauce really gets into the ribs but also it cuts down the cooking time too going from 3-4 hours to just 1 hour. Plus all of the goodness and flavour goes into the sauce which then gets reduced and it then bastes the ribs in the final grill stage. 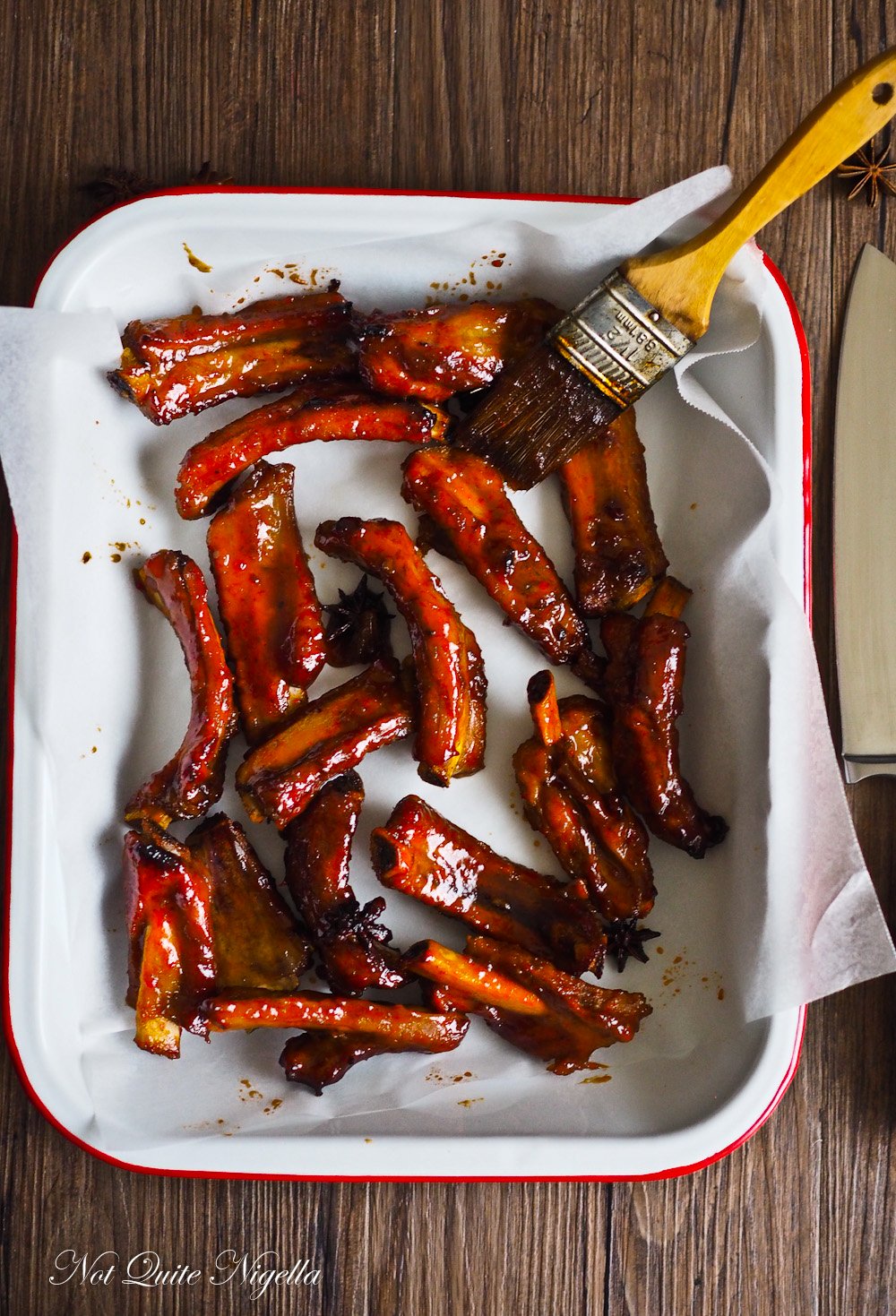 There is always a point when I am experimenting with recipes where I think "What the hell am I doing? This could be a total disaster". I've definitely faced disaster in the kitchen most notably when I've tried to make toum half a dozen times and it never works. And the feeling came over me when I opened the pot after an hour and saw that they were pale with a slight tinge of scarlet. This was as far from my dreams as things could be. But something kicked in and maybe it's because I'm a bit more comfortable playing with Asian flavours that I pulled it together and quashed my significant doubts.

In other arenas I am less confident but have been trying to branch out in other areas. And one way recently is a rather silly way.

I bought a pair of sneakers. 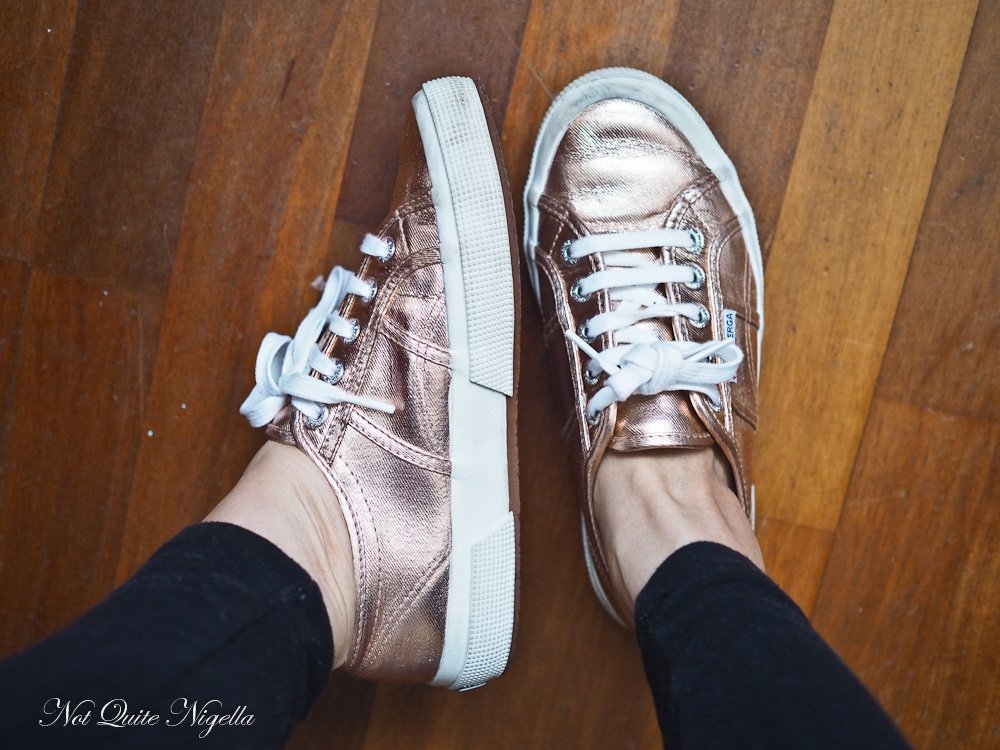 Edited to add a picture of the sneakers as a reader request ;) x

Yeah I know. Hardly earth shattering news is it? But for someone that only has one pair of sneakers for training this is new. I usually hobble around in heels or ballet flats (or thongs during summer). But while I was overseas my feet were aching and I switched to my trainers and I finally realised why everyone else wears them. When I got home I decided to buy a pair of sneakers and the ones that caught my eye were a pair of rose gold ones. When I tried them on they weren't quite as comfortable as my trainers but Mr NQN pointed out that they were "fashion sneakers" so I wasn't to expect too much. But I have to admit that I do love wearing them. Perhaps I'll even buy another pair! Is this how obsessions start?

So it's never too late to try new things. Like these ribs for example. After a minor panic I put the grill on and reduced the sauce with honey and then basted it. And when I brushed the glaze on they became the ribs of my dreams. Soft, sweet and luscious they had the aroma of star anise as well as a tangy aspect to them. I had four ribs while Mr NQN ate the remaining 3/4 of a kilo of ribs with much lip smacking and finger sucking. If you love getting your fingers a bit saucy with ribs I'd urge you to give these ribs a try!

So tell me Dear Reader, are you a person that likes routine or do you like to change things up? Do you ever dream about food? Do you dream food? How about dreaming recipes? 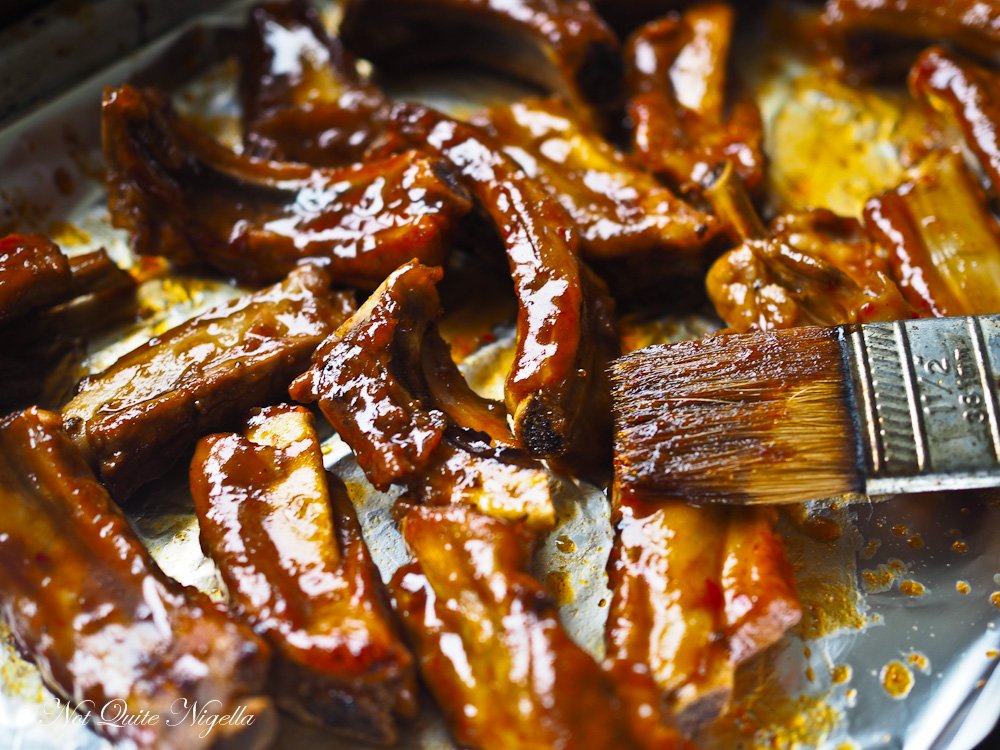 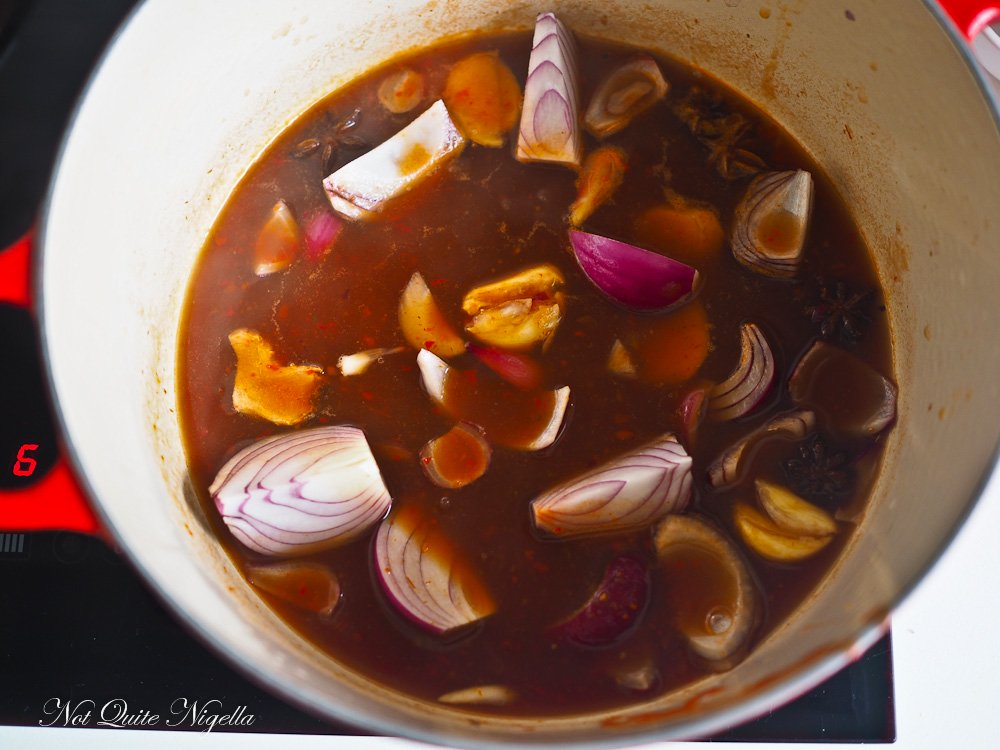 Step 1 - Place the stock in a pot along with the garlic, onion, tomato sauce, star anise, soy sauce, Worcestershire sauce, sugar, vinegar and salt. Bring to the boil, add the pork ribs and nestle them into the sauce. Simmer for 45 minutes with the lid on. Remove the lid and then allow to simmer for 15 minutes turning the ribs over. 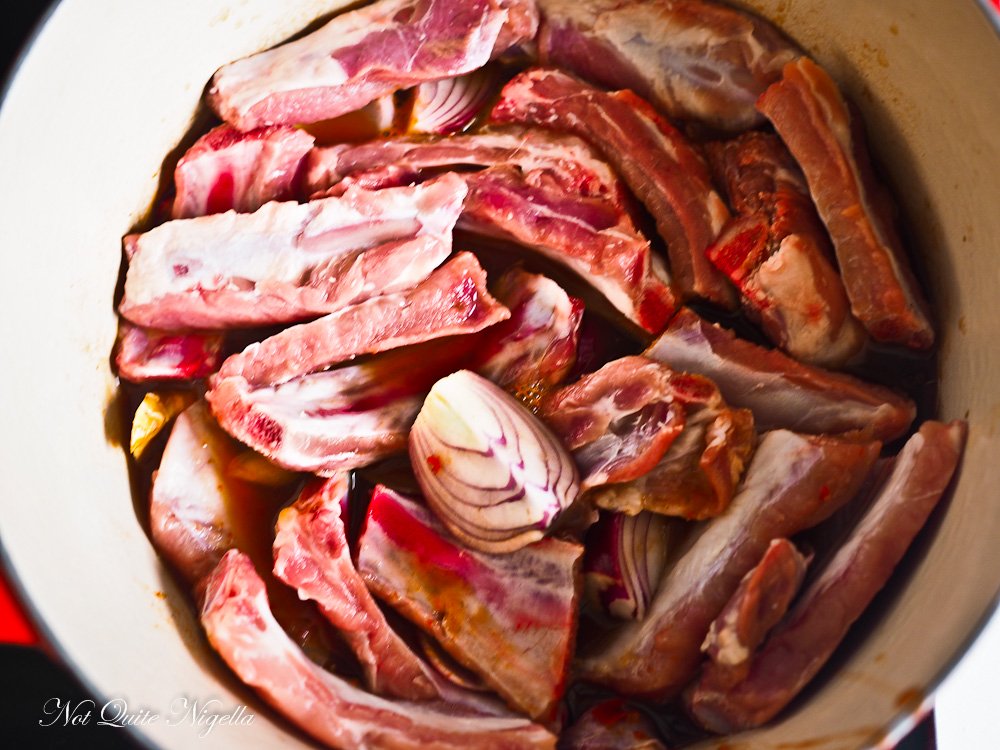 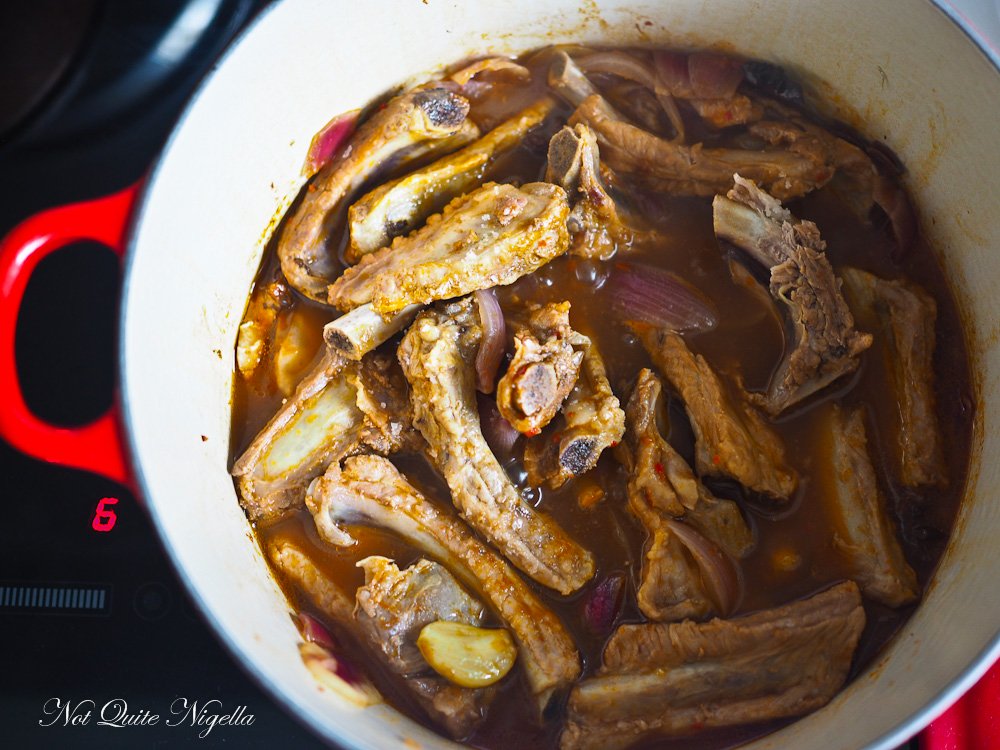 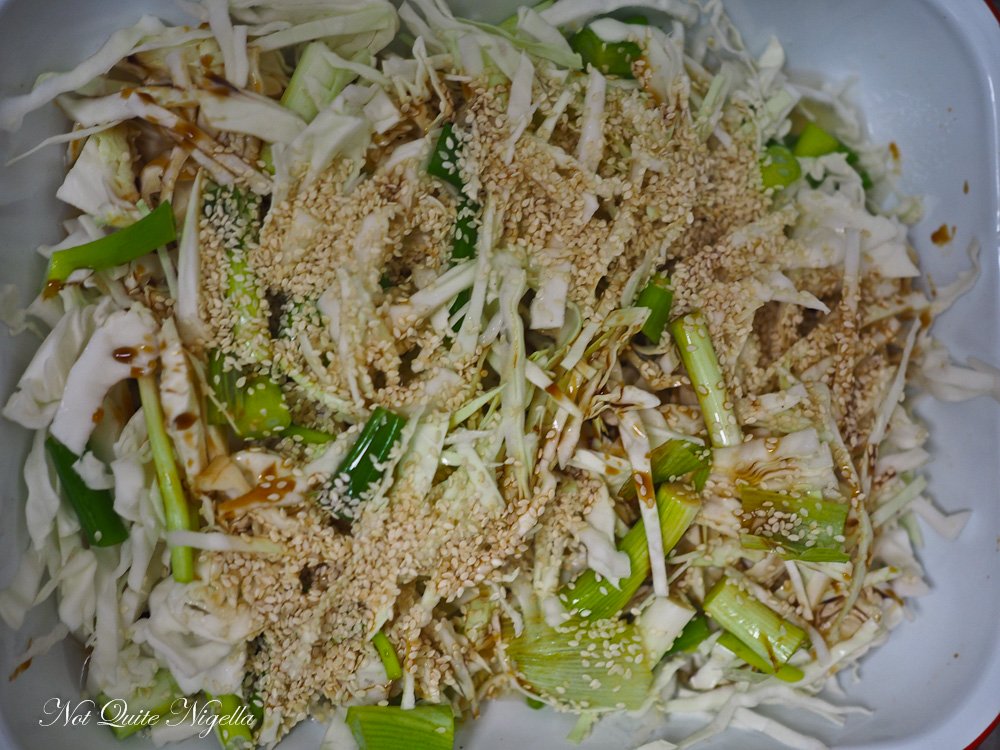 Step 1 - Preheat oven to 180C/350F. Mix the cabbage, stock, soy sauce and sesame seeds together in a bowl and place on a baking tray. You can also do this on the stovetop and keep cooking for about 30 minutes until it the cabbage becomes soft.