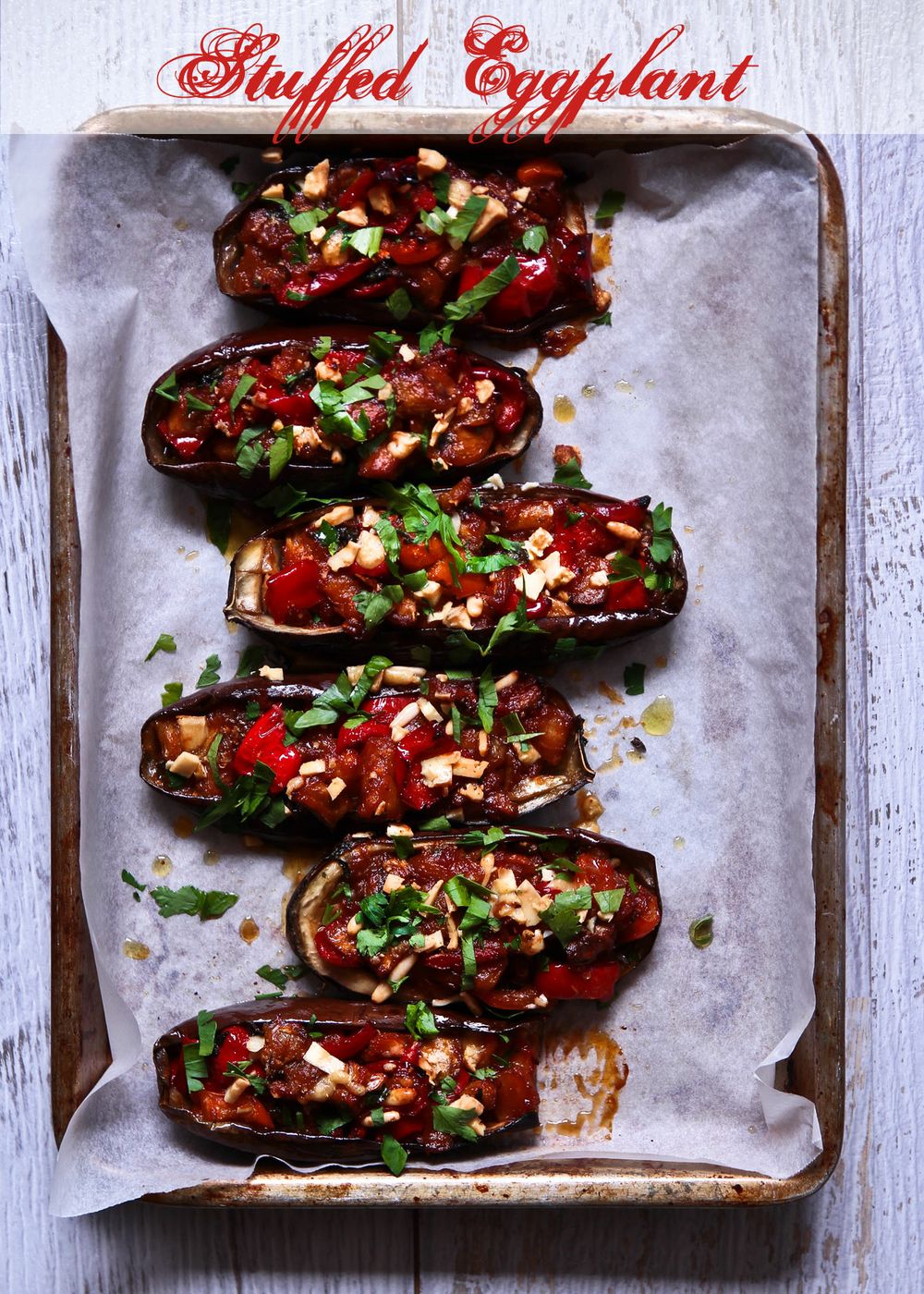 In the first couple of years that Mr NQN and I first started going out we didn't entertain much at all. This was because there was no dining table to speak of and any guests had to huddle around a coffee table which really isn't ideal if people are eating with forks and knives.  Mr NQN saw no need to buy a dining table as he was living by himself and all meals were eaten in front of a glowing computer screen. So we never had people over because nobody wants to sit at a table looking like the hunchback of Notre Dame playing tea party.

Until one year I decided that I wanted to start cooking. And if you cook for pleasure then you'll realise that slowly, you want to spread this activity among friends and family. Slowly we invited people over. We started off with family members, they were easiest and less critical. I started with Mr NQN's sister and boyfriend who were very non critical when it comes to food. 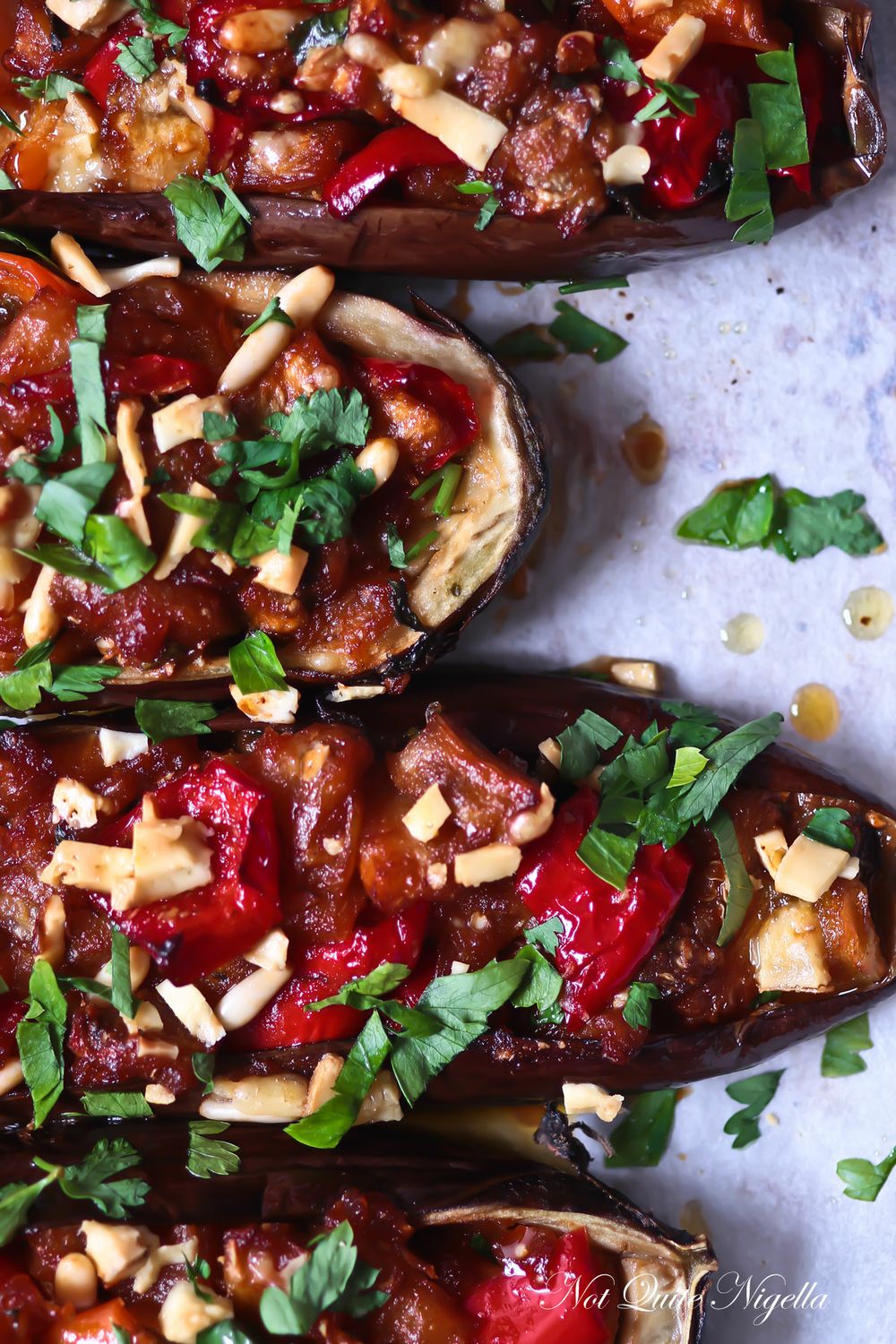 I decided to make a caponata, an eggplant or aubergine dish from somewhere, it might have even been a Nigella Lawson cookbook.  I had never cooked with eggplant before so I didn't know anything about using salt to take out the eggplant's bitterness. I was so busy fluttering around that I sat down last and they and Mr NQN had already started eating. I took a bite and the caponata had that odd taste to it, what I now know is the bitter liquid that you should draw out using salt, for the larger eggplants.

I looked around alarmed but everyone else appeared to be eating it without comment or alarm. Thankfully they didn't notice or were too polite to comment about the bitter taste of the eggplant. I didn't dare ask and we swiftly moved on to the main course (which I can't remember to be honest) and the dessert, a chocolate and lime cheesecake which they thankfully loved so much I think it obliterated any sort of hesitations they might have had about the caponata. 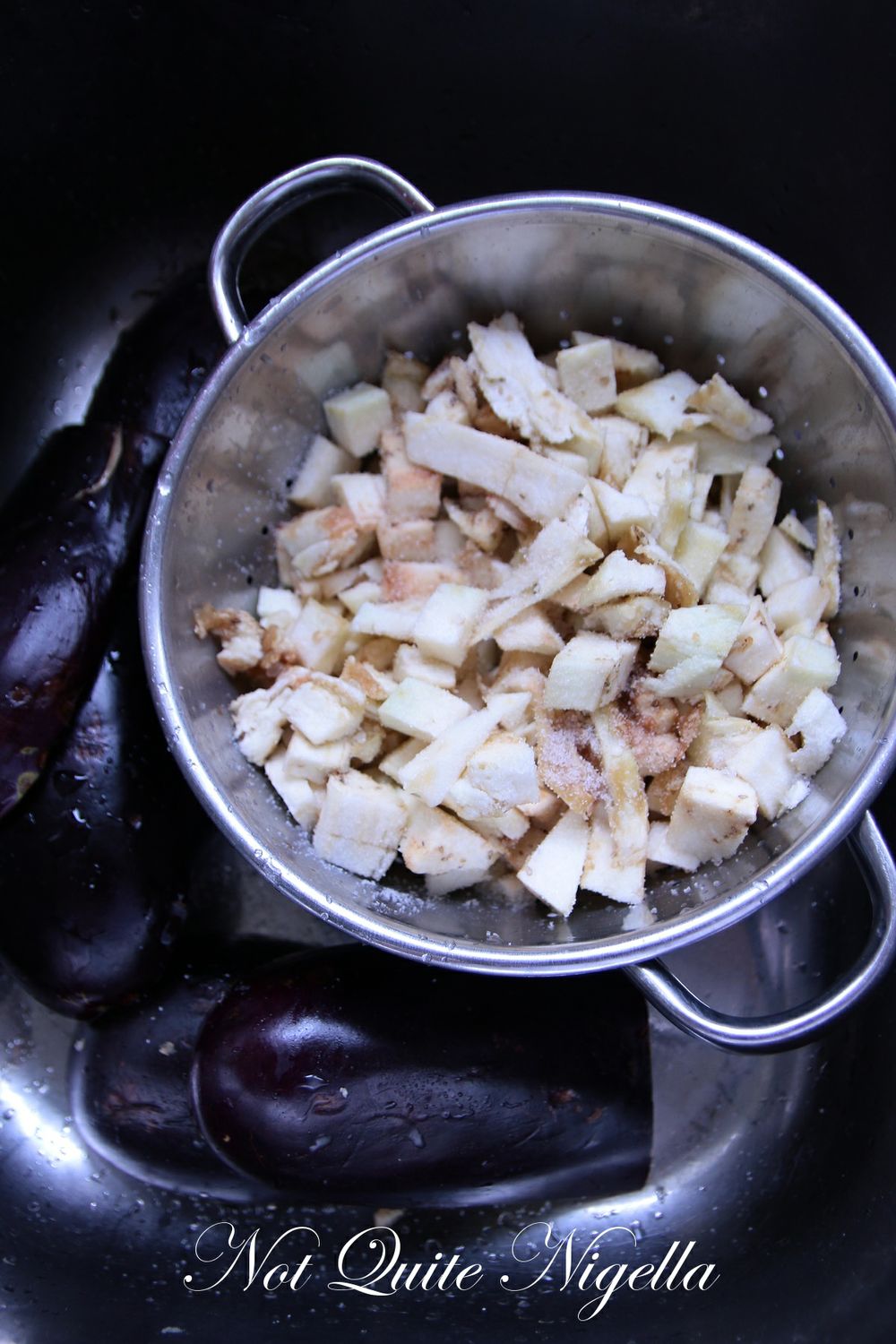 Salting and draining the eggplant

Ever since then I always salt the large eggplants while the smaller ones of Japanese eggplants don't really need it. It has become one of my favourite vegetables as I love the melty texture that you can get from eggplant when cooked at length.  When we drove down the Great Ocean Road recently we had an Imam Bayildi at a restaurant and I was reminded how much I love this dish. The eggplant is hollowed out and then filled with a melting mix of eggplant cubes and vegetables and then baked for maximum gooey softness.

This is a version of the Turkish dish Imam Bayildi which translated means "The Imam fainted" as the imam or priest was said to be so impressed when he first tried it. The trickiest part of this dish was removing the eggplant flesh from the eggplant halves while leaving the skin intact. After that it was a matter of sauteeing the vegetables and then baking it in the oven. This version adds some cheese and toasted pine nuts to it although you can keep it traditional by omitting these. It is a dish that I find gloriously comforting with the colours and the glistening eggplant halves.

So tell me Dear Reader, do you invite people over often?  And what did you cook at your first dinner? 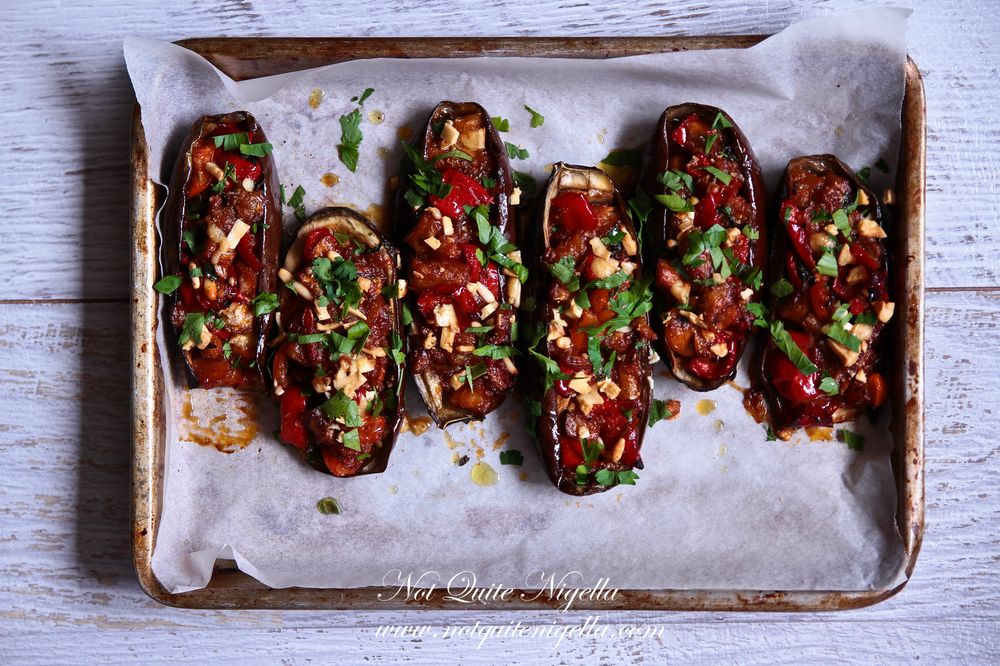 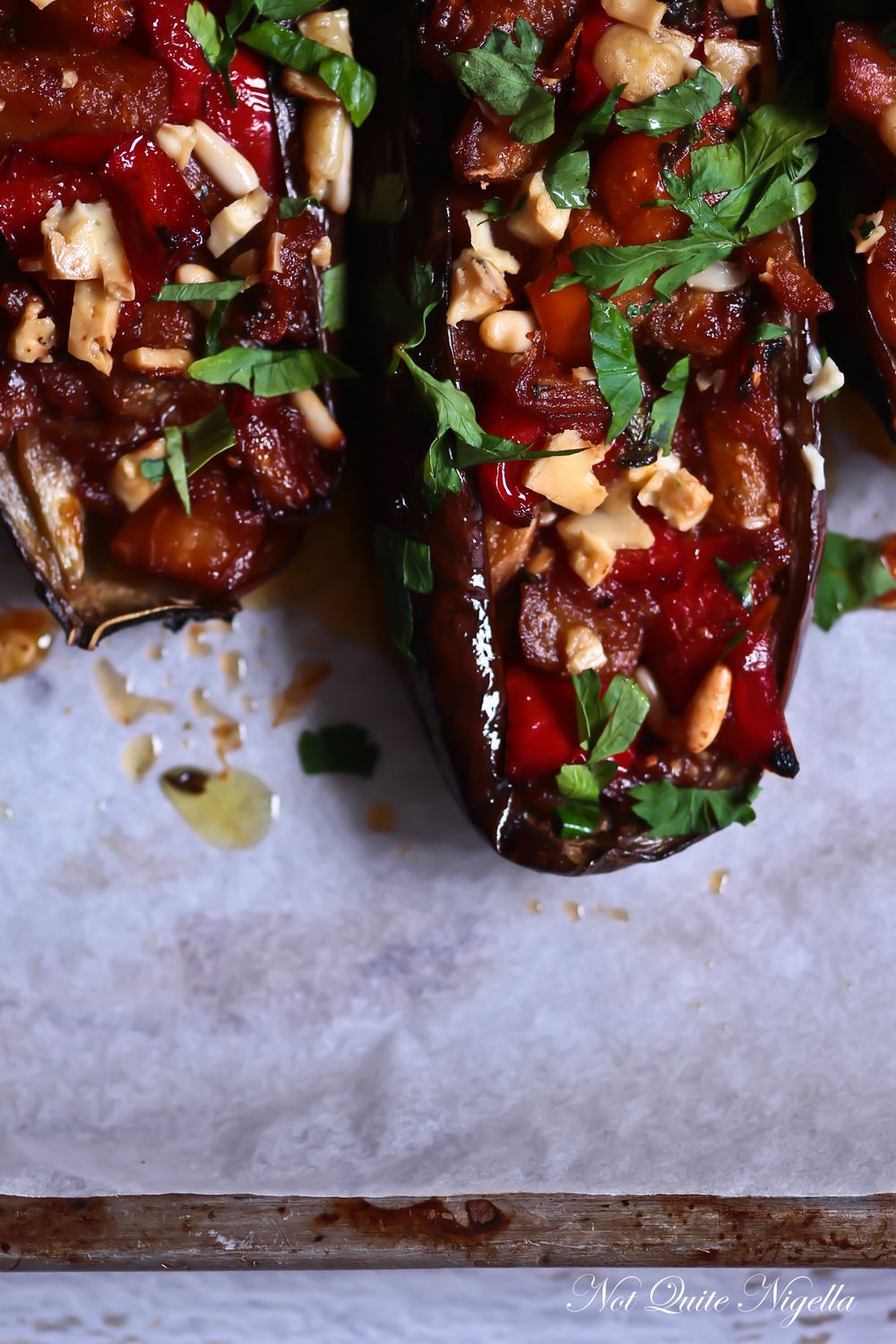 Serves 6 as a side dish or entree 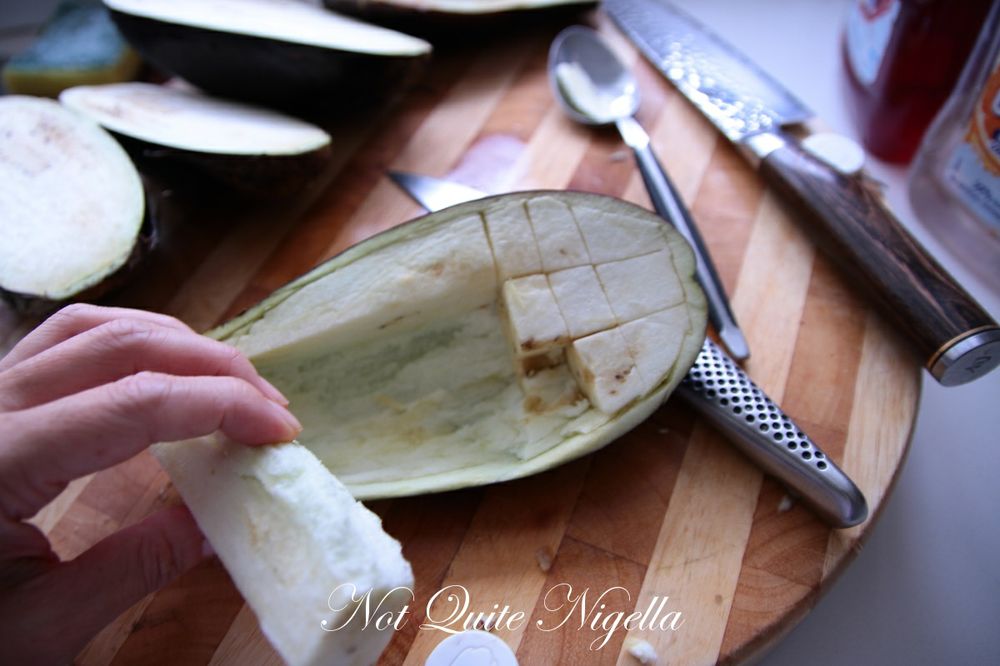 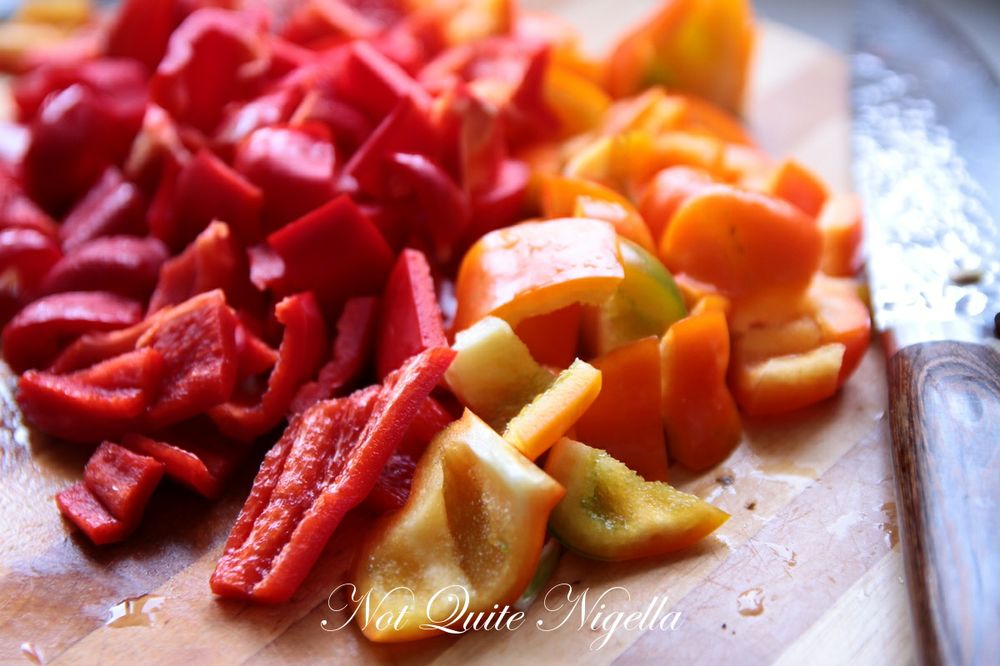 Step 2 - Preheat the oven to 180c/350F and line a baking tray with parchment. Fill a large saucepan with water until simmering. While it is heating up, dice the onions, garlic, capsicums and tomatoes. Toast the pine nuts in the oven for 5 minutes until golden. 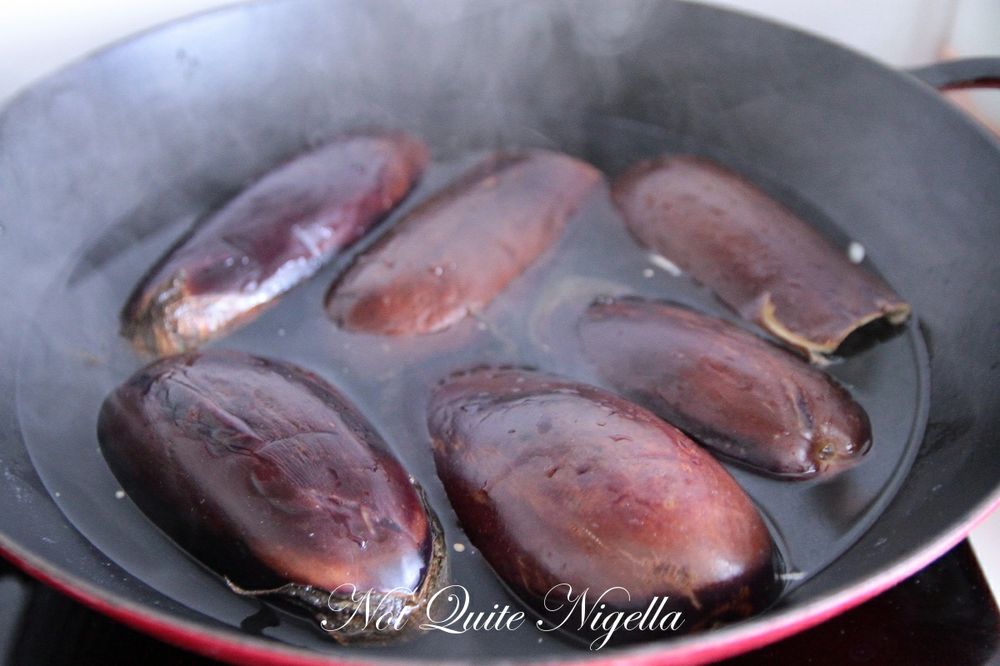 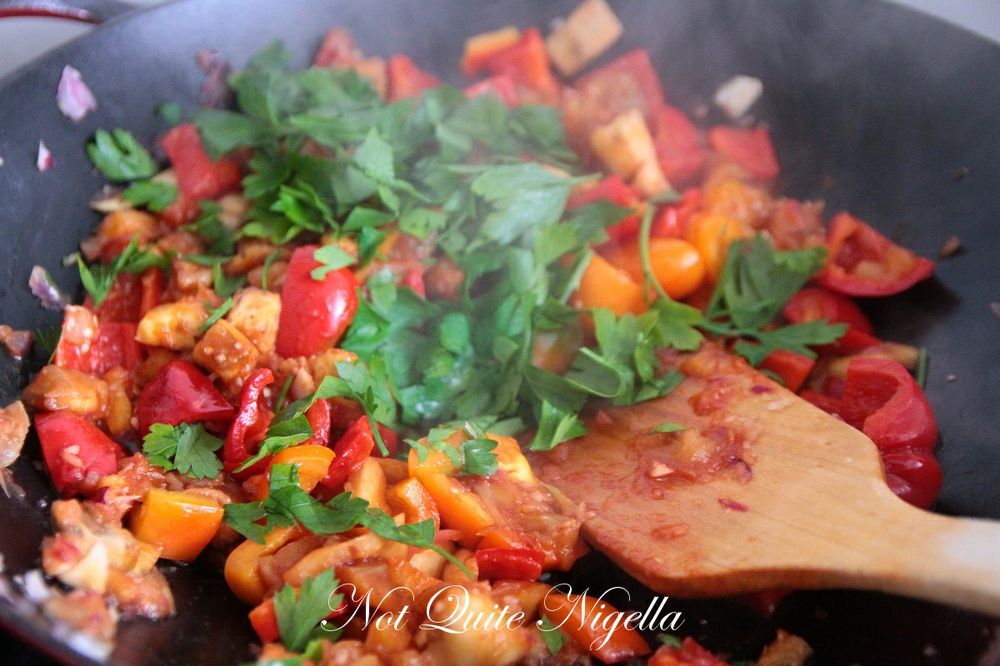 Step 4 - Rinse out the saucepan and dry it and then put it on medium to high heat. Add 1 tablespoon of oil and fry the onion and garlic until soft. Then add some more oil and fry the capsicum, tomatoes and drained eggplant cubes and saute until soft, about 10-15 minutes. Eggplants can really absorb a lot of oil so it's up to you how much you want to use (you can also use a couple of tablespoons of water if you want to keep it low fat). Add pine nuts, feta, lemon juice, parsley, sugar, cinnamon and salt and pepper to taste. 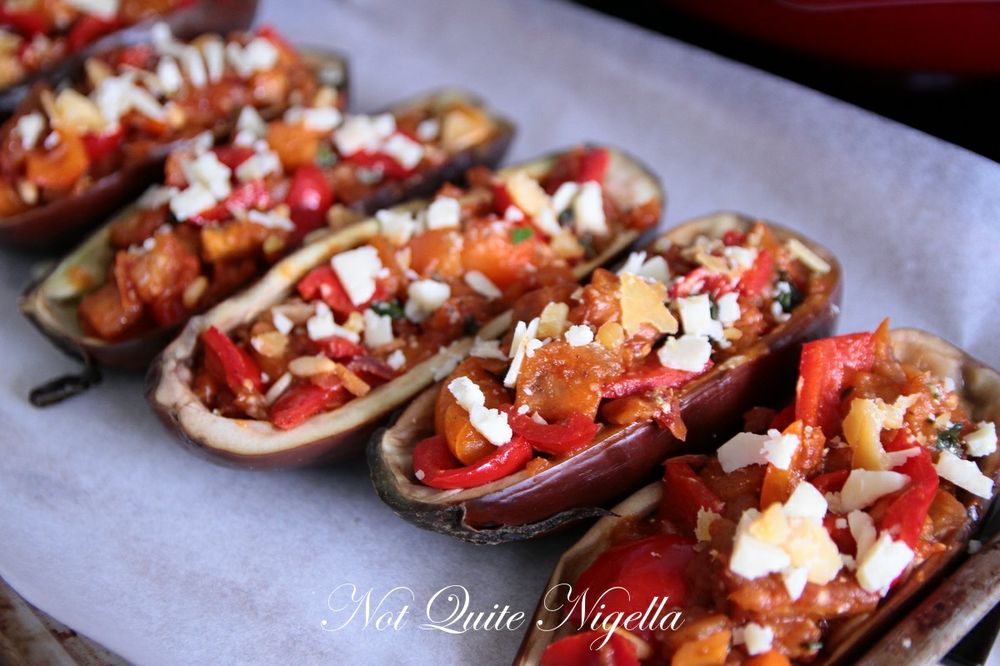 Step 5 - Place the eggplant skins on the lined baking tray and brush with oil. Fill with the vegetable mixture and top with more cheese if you want. Drizzle some more oil on top and around the sides of the eggplant and bake for 35-40 minutes until very soft. Serve with extra parsley. 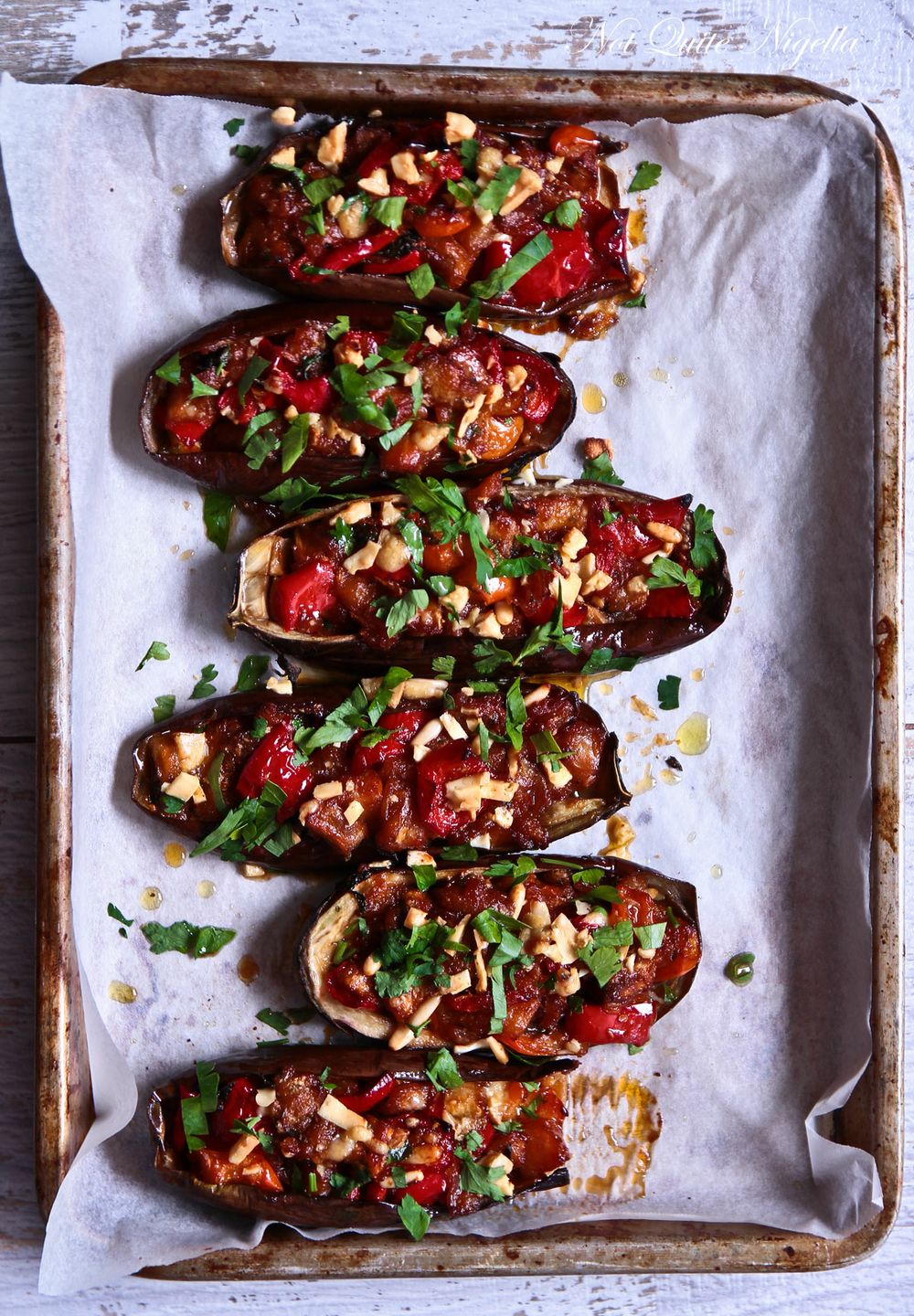