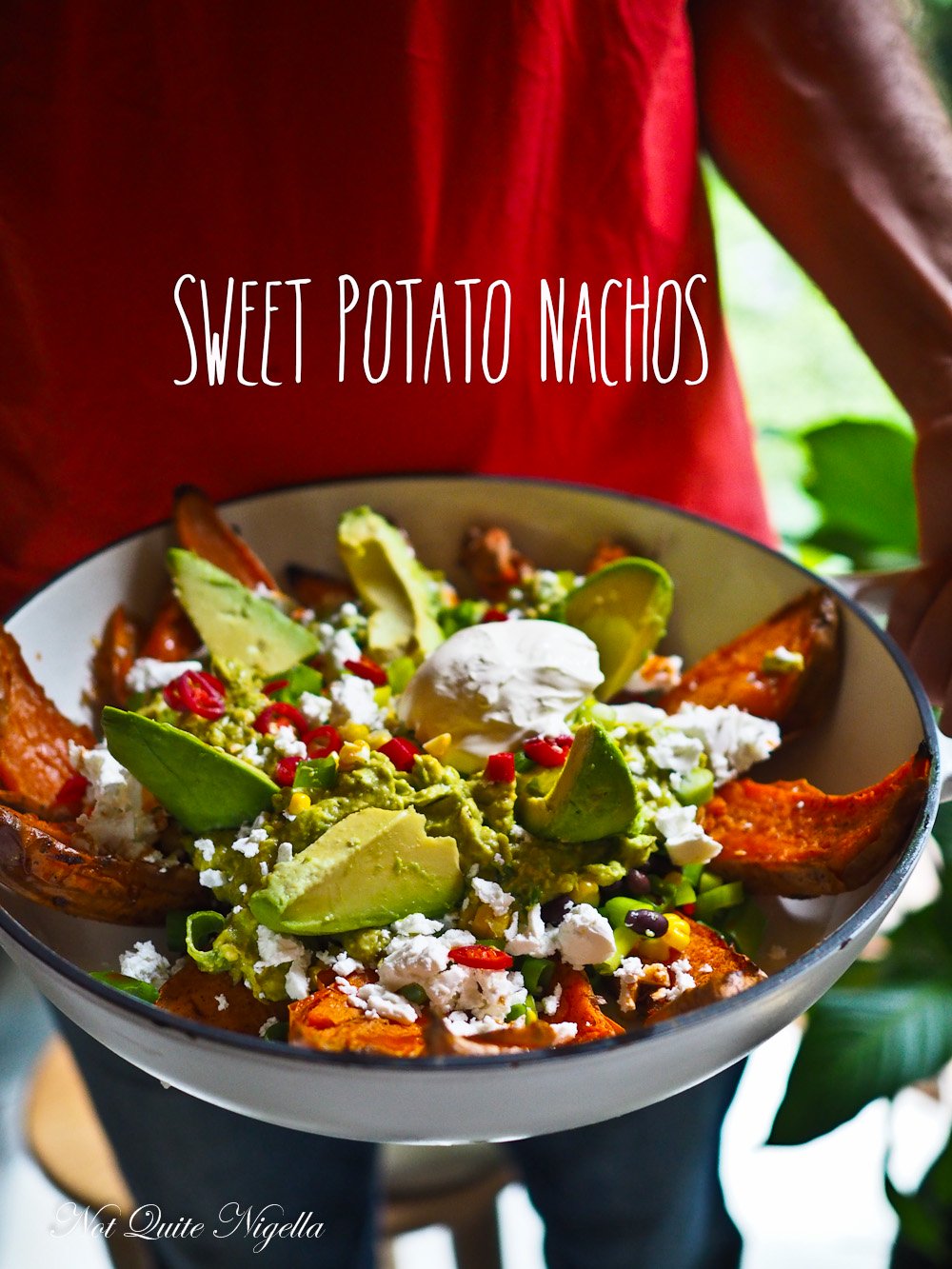 I don't know about you Dear Reader, but I've got a real hankering for vegetable dishes after the gluttonous feast of Christmas. And not just any vegetarian food but twists on the usual. This sweet potatoes nachos are so delicious I immediately planned to make a second batch after the first. It's chock full of vegetables and beans and there's no deficit in flavour. Just pure unadulterated pleasure.

I came up with this idea on a recent trip to the Blue Mountains. Mr NQN and I had escaped there with Mochi early in the week to relax a little and unwind. However I forgot one major thing: a lot of restaurants are not open for dinner during the week only opening on Thursday to Sunday so while we had plenty of choice during the day there wasn't as much at night apart from takeaway. Which was fine with us as we wanted to relax in the house we had booked.

As we were going away for a couple of days we brought some food from home with us that needed finishing like chilli, spring onion, baby spinach, avocadoes and berries. Some of the berries were eaten for breakfast and I surveyed my haul for dinner before deciding that I would try my hand at sweet potato nachos after poking around their pantry and seeing hot sauce. 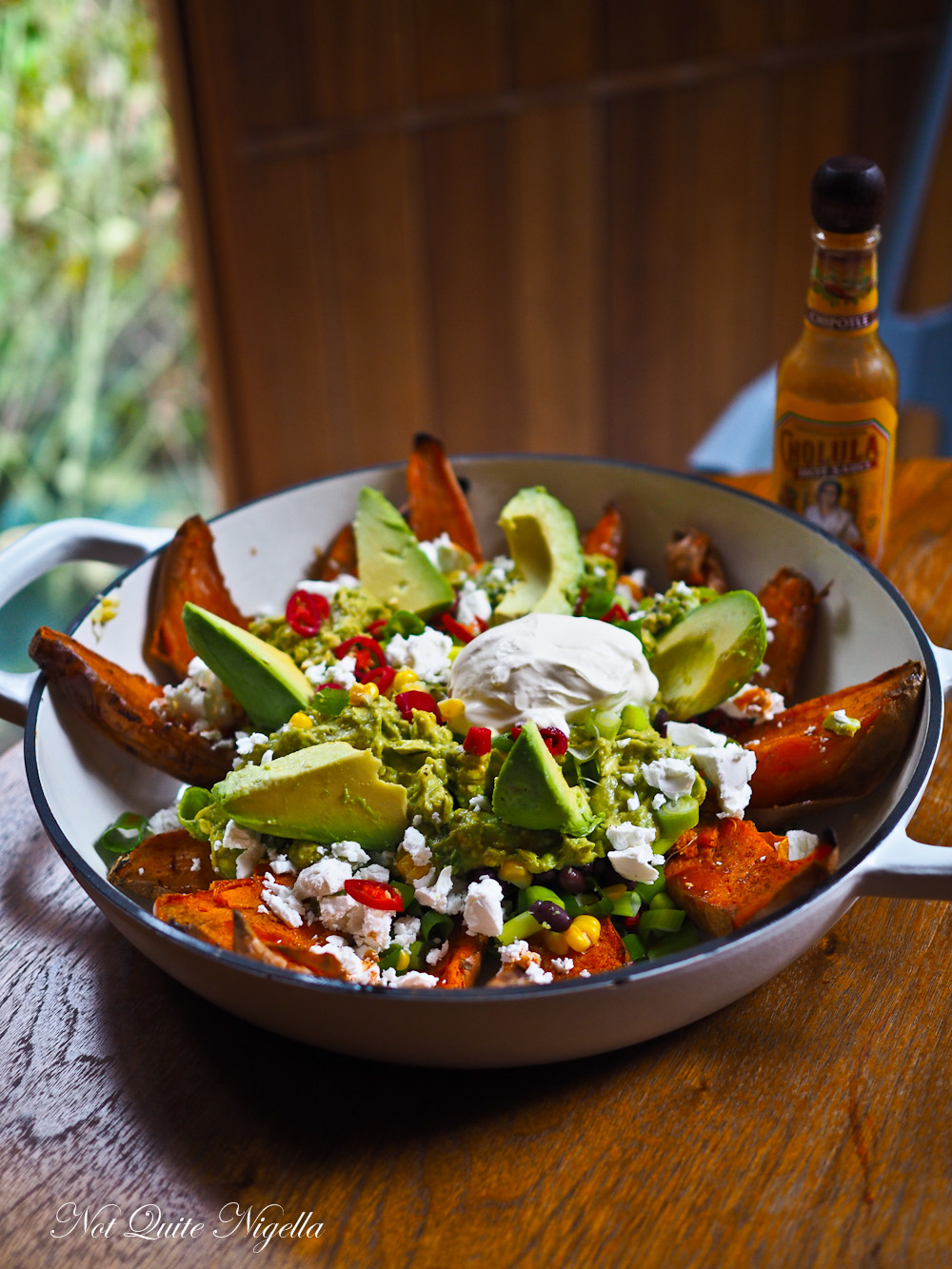 We did go to the shop for a few things: a tiny square of Danish feta, a tin of black beans, sour cream and a cob of corn (I could have used tinned but I love fresh corn) and made use of the cabin's Sriracha, chilli powder and hot sauce. And when I ate it I became obsessive about it. Suddenly I wanted everyone to try this recipe because it was SO good (yep it's a pushy recipe) and actually felt healthy (okay the sour cream is high in fat but you can also use natural yogurt). I re-added all the ingredients on our shopping list. Yes I became completely obsessed with sweet potato nachos.

I realise my obsessions are a little different. As we were driving past Katoomba on the highway Mr NQN noticed the long queue of cars to turn into Katoomba. "Ahh maybe they're driving to get to the bakery there," I mused aloud, completely serious. Mr NQN laughed and shook his head, "Oh pickles, I think it's for the Three Sisters," he said. Which was actually probably more likely when I think about it but honestly I did think that people were as obsessed with food as I am!

Anyway, please note that I make no claims of authenticity with this recipe, only claims of deliciousness. I realise that this is not an authentic guacamole but I only had the ingredients that I had to hand as I was not cooking at home. Having said that, this is one of the most delicious vegetarian offerings I've eaten and a great sharing meal with friends.

So tell me Dear Reader, are you a food obsessive? Do you ever feel like you think a bit differently from other people? Are you eating a bit lighter after Christmas?

Step 1 - Preheat oven to 180C/350F and bake the sweet potatoes for 45 minutes or until becoming tender. Remove from oven and split in half and drizzle with oil and sprinkle with chilli powder. Bake for another 15 minutes.

Step 2 - Mash 1.5 avocadoes with the Sriracha and salt and pepper and cover and set aside. Remove the kernels from the corn and set aside. Drain the black beans well.

Step 3 - When the sweet potatoes are done place them on a large serving platter around the outside. On the inside place the black beans, corn kernels and half of the green onions and chillies. Add the guacamole in dollops around the beans and then crumble the Danish feta on top and add hot sauce. Garnish with the rest of the green onions, chilli and slice the remaining 1/2 avocado in wedges and stick them in the guacamole.