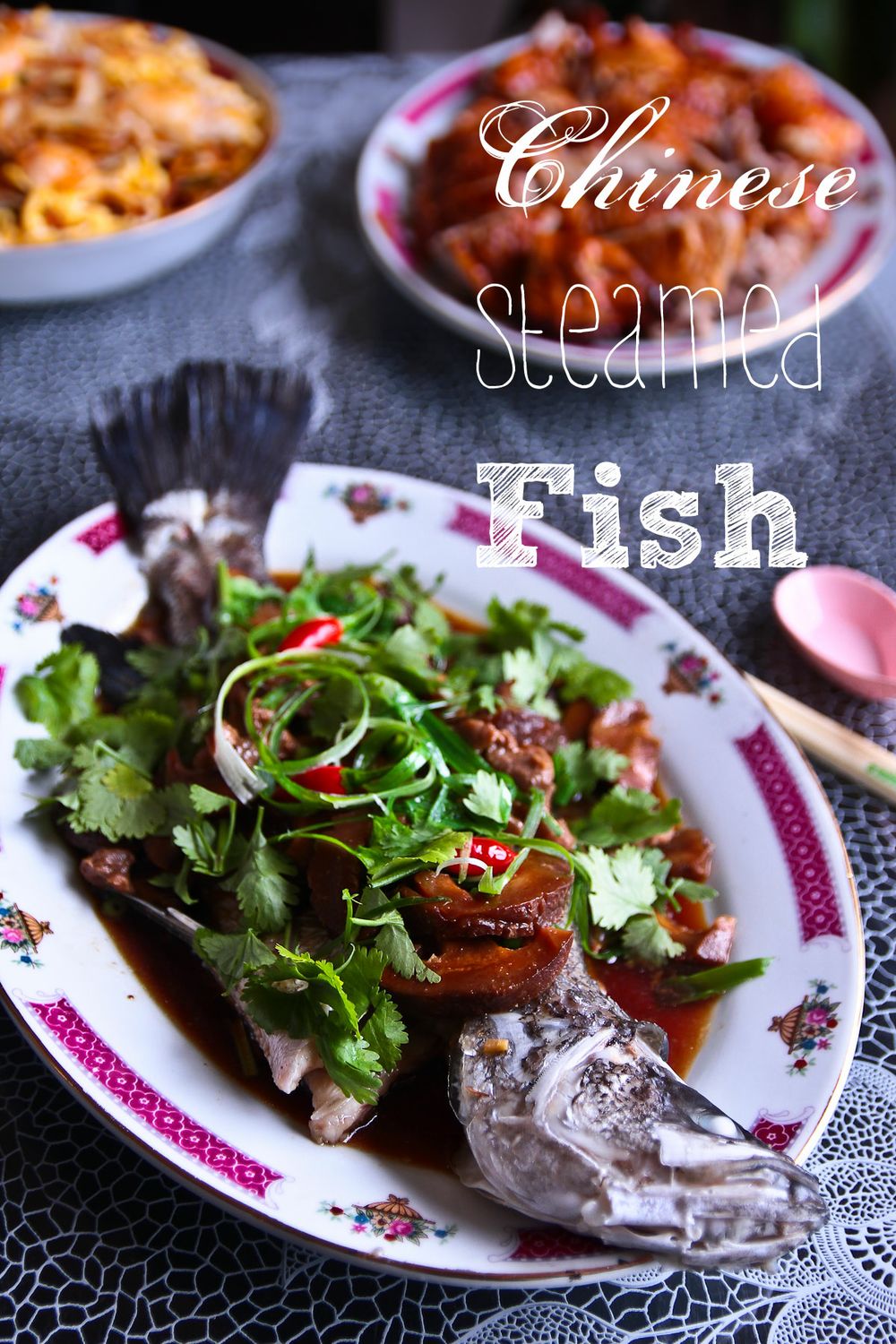 Dear Reader, were you a picky eater as a child? I'm ashamed to admit it but I was. There wasn't the usual fear of vegetables, in fact, my food fussiness was relegated to more strange preferences than anything else. For example, I used to love chicken skin. I know everyone else is supposed to love the white meat but not I. I declared a secret love to the flavoursome, crunchy skin. But being a child that had no idea of consequences, I simply ate the chicken skin off the chicken wing pieces and hid the bones and the rest of the meat under my napkin. At the end of the meal, I'd clear my napkin and plate and deposit the napkin in the bin.

My parents never noticed a thing and this went on for years until one day I left the table without taking my napkin with me and they picked it up and about eight or nine naked skinless chicken wings fell out. I was in a great deal of trouble that night and they watched me like a hawk for a few nights afterwards. After the suspicion quelled, I resumed my chicken skin eating routine. 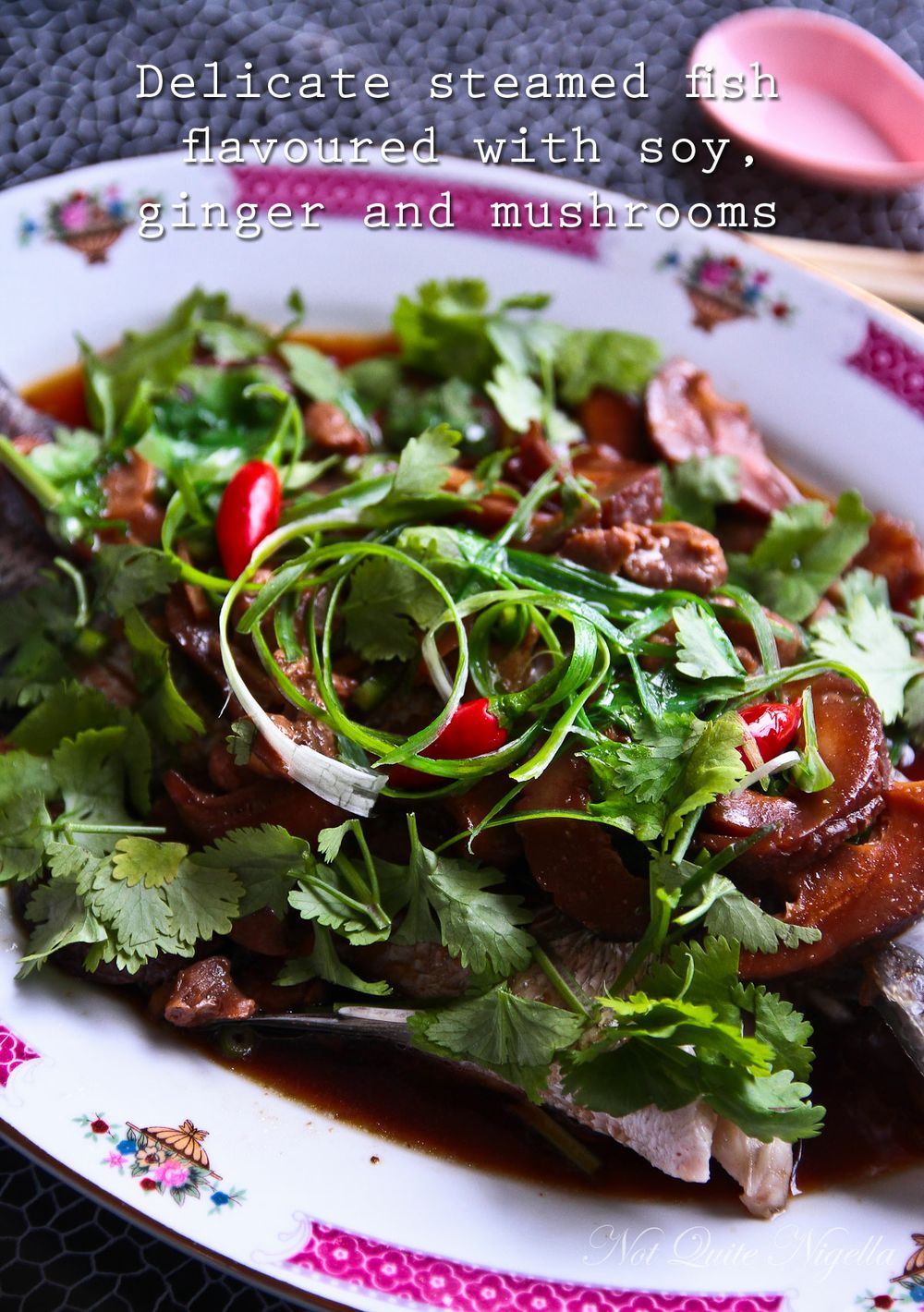 This dish of steamed fish with oyster sauce and green onions would also not have done me. Fish and seafood were off limits and I'd simply turn my nose up at them. Oh how times have changed now and I go crazy for the stuff leaving behind chicken to eat on week days and when I'm preparing food myself.

As it is Chinese New Year today, eating whole fish with the head and tail still attached symbolises completeness which is seen as something good as the whole family returns home to have a Chinese New Year dinner (also called a "reunion dinner"). My mother also tells me that phonetically "swimming fish" sounds like to "have a surplus or abundance of everything" which is always good in Chinese culture.

We've ordered this countless times in restaurants and I was surprised to find out how easy it was to make at home. A fish that feeds four as part of a banquet only takes twelve minutes to steam and we all love the delicately steamed fish and the perfectly seasoned splash of sauce. Of course when my mother makes it, it tastes just that much better because she adds even more of what we want in it. Which for me means shiitake mushrooms and for Mr NQN means ginger.

We ate this last night with braised eggplant, a whole roasted duck and long noodles. And do you know what my mother said when eating the duck? "I think I'll just take that piece with just the skin!" You see, I got it from somewhere ;)

So tell me Dear Reader, were you a good eater as a child? Is there anything that you wouldn't have touched then but love now? 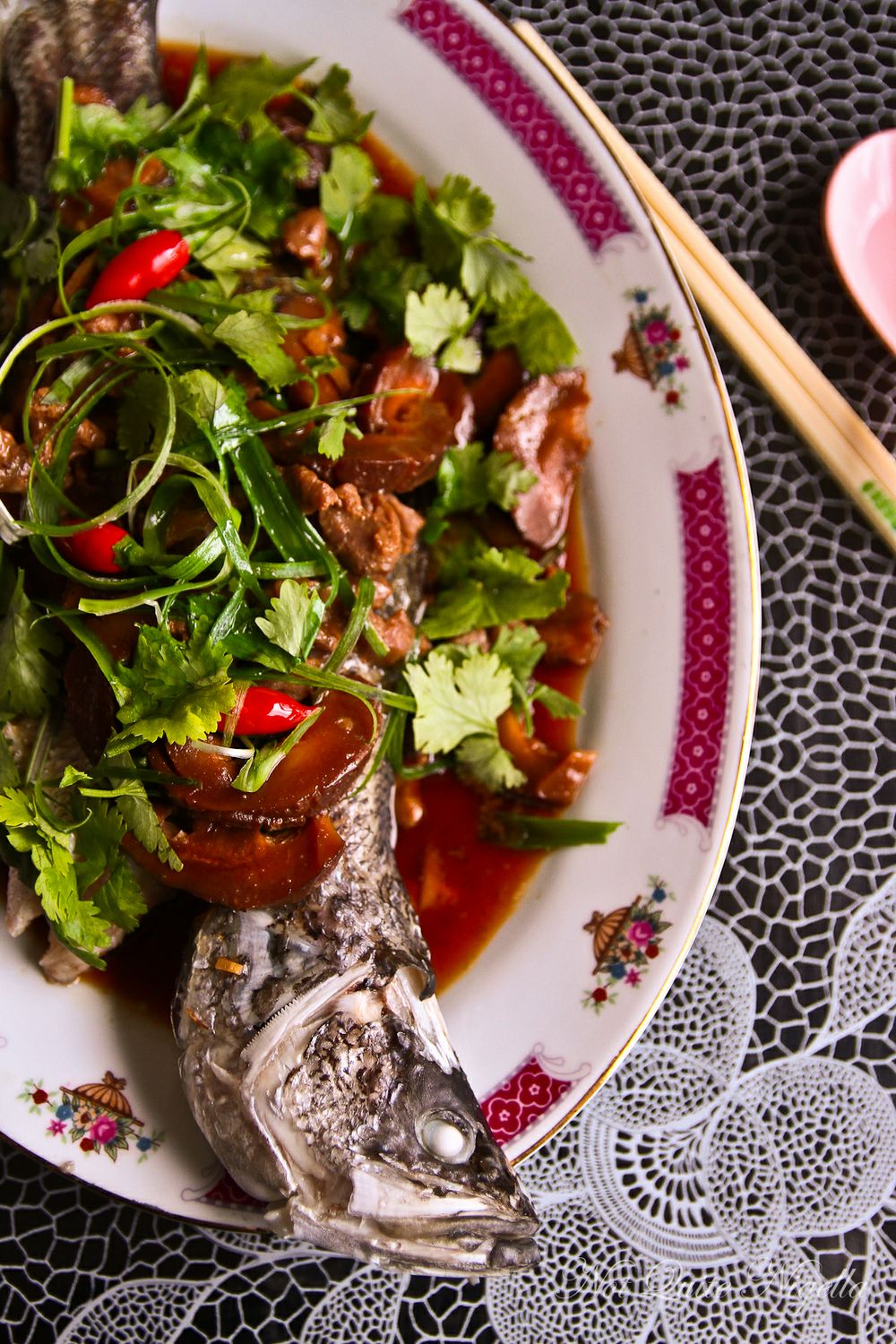 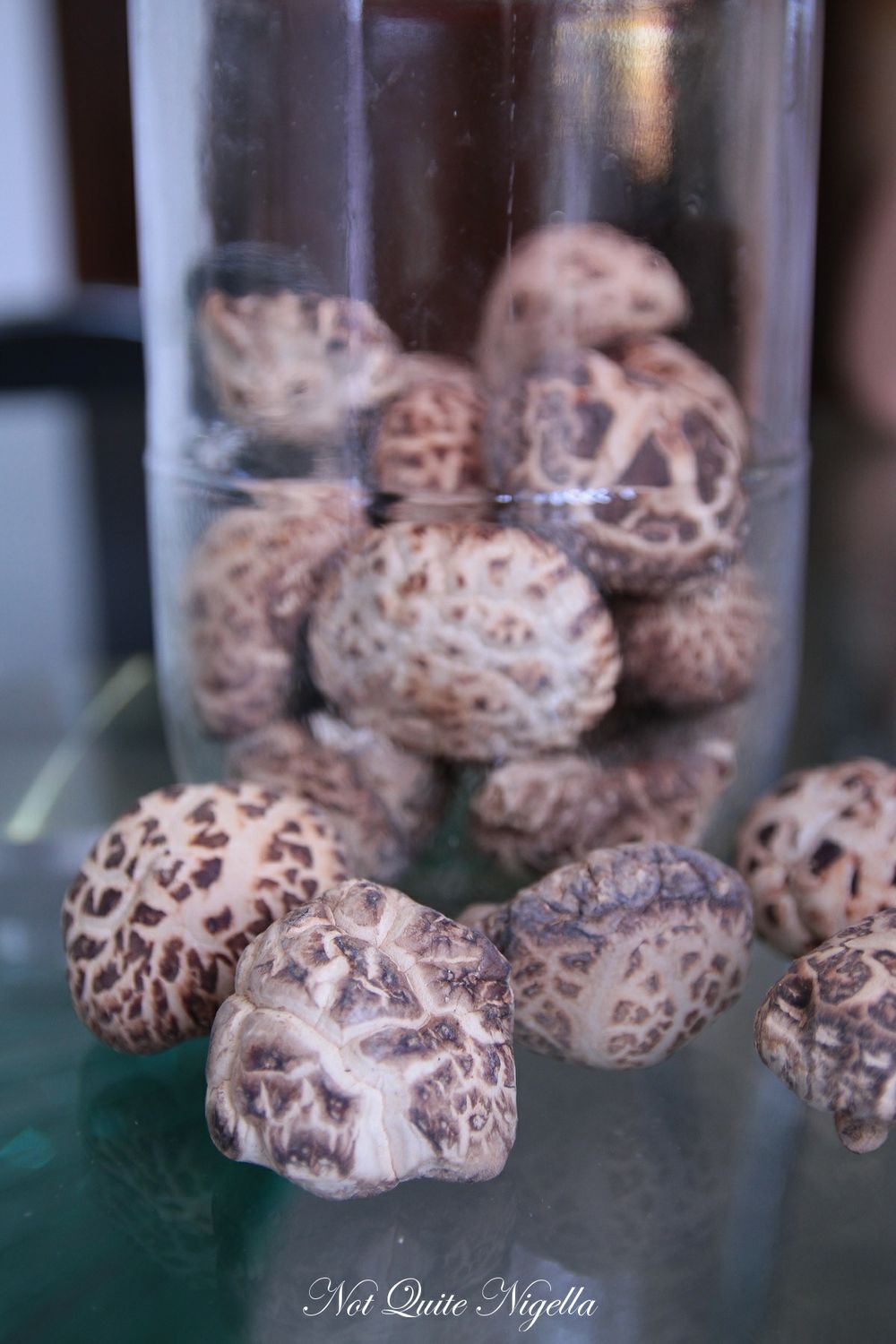 Buyer's note: my mother loves these dried hu?g? ?? "flower" shiitake mushrooms as opposed to the uniformly dark ones. They are more expensive but the flavour is really good and the aroma more delicate.

Step 1 - Slice the shiitake mushrooms and julienne the ginger until they are thin matchsticks.

Step 2 - In a bowl, mix all marinade ingredients together. Place the pork, mushrooms and ginger in the marinade and let sit for about 15-30 minutes.

Step 3 - Prepare the steamer or large frypan or wok and fill with hot water and place a trivet in it. Have a large heatproof plate that fits the steamer ready. My mother recommends a 600 gram fish because if it is larger, then it's hard to find a steamer big enough. Lightly grease the bottom of the heatproof plate and place a few slices of marinated mushroom on the bottom-this is to prevent the fish from sticking to the bottom. Place the fish on top and scatter the marinated pork, mushrooms and sauce above it and below making sure to brush the fish with the sauce. 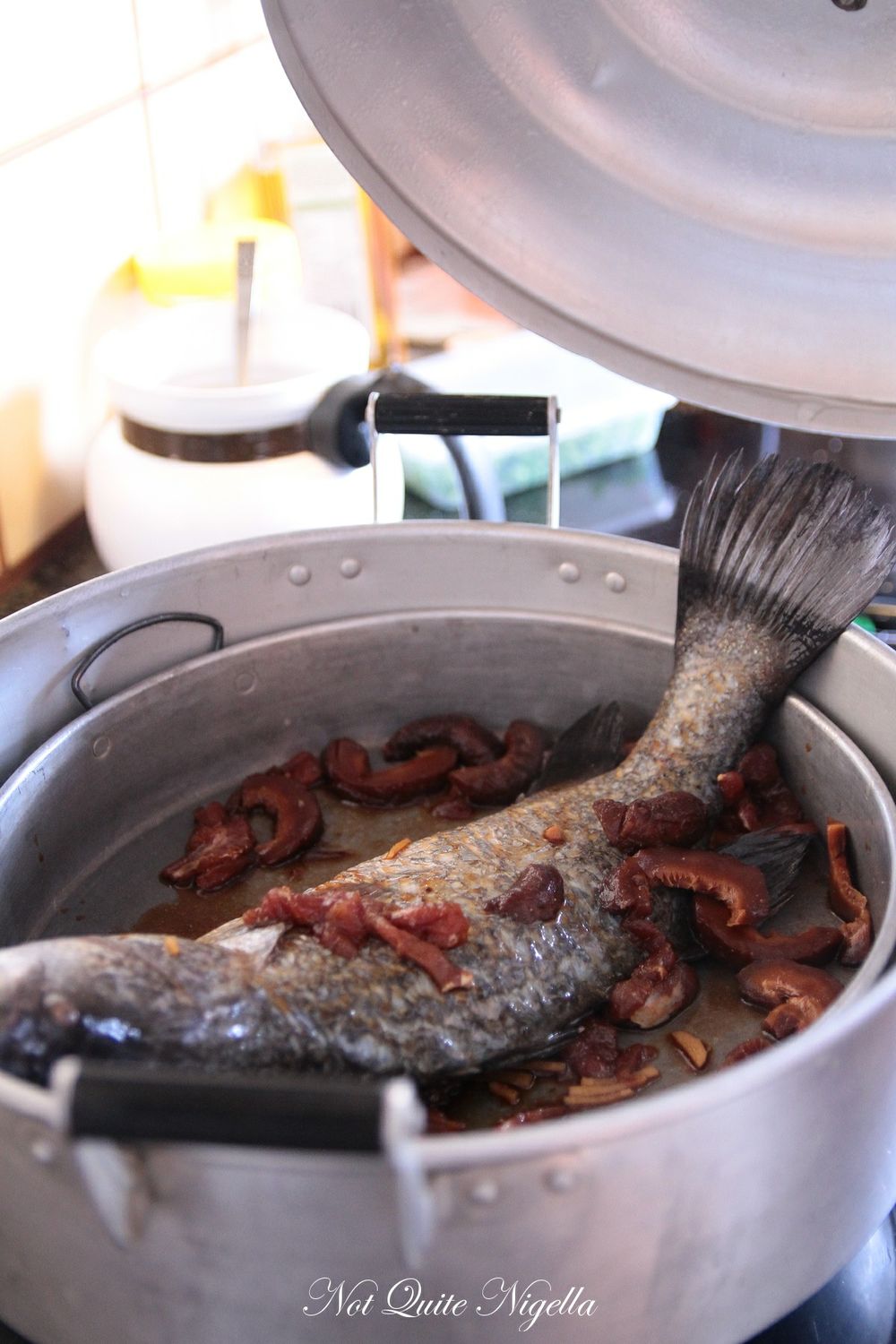 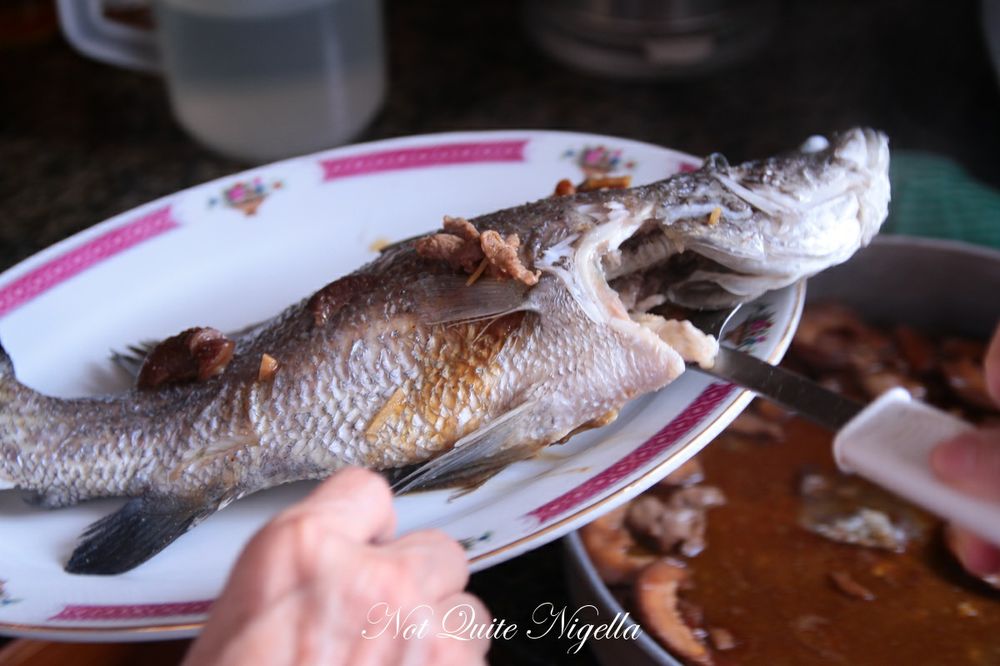 Step 5 - Remove fish from heat carefully and gently lift into the serving plate-I find this easiest done with two egg flips, one in each hand cradling the fish at both ends. Be sure to transfer the sauce too as this is where a lot of the flavour lies.

Step 6 - Scatter the fish on top with the green onions and coriander leaves. Then carefully pour the hot oil over the top and serve with boiled white rice. When you eat it, be sure to scoop up some of the sauce as the fish is not seasoned or marinated and can taste bland otherwise. 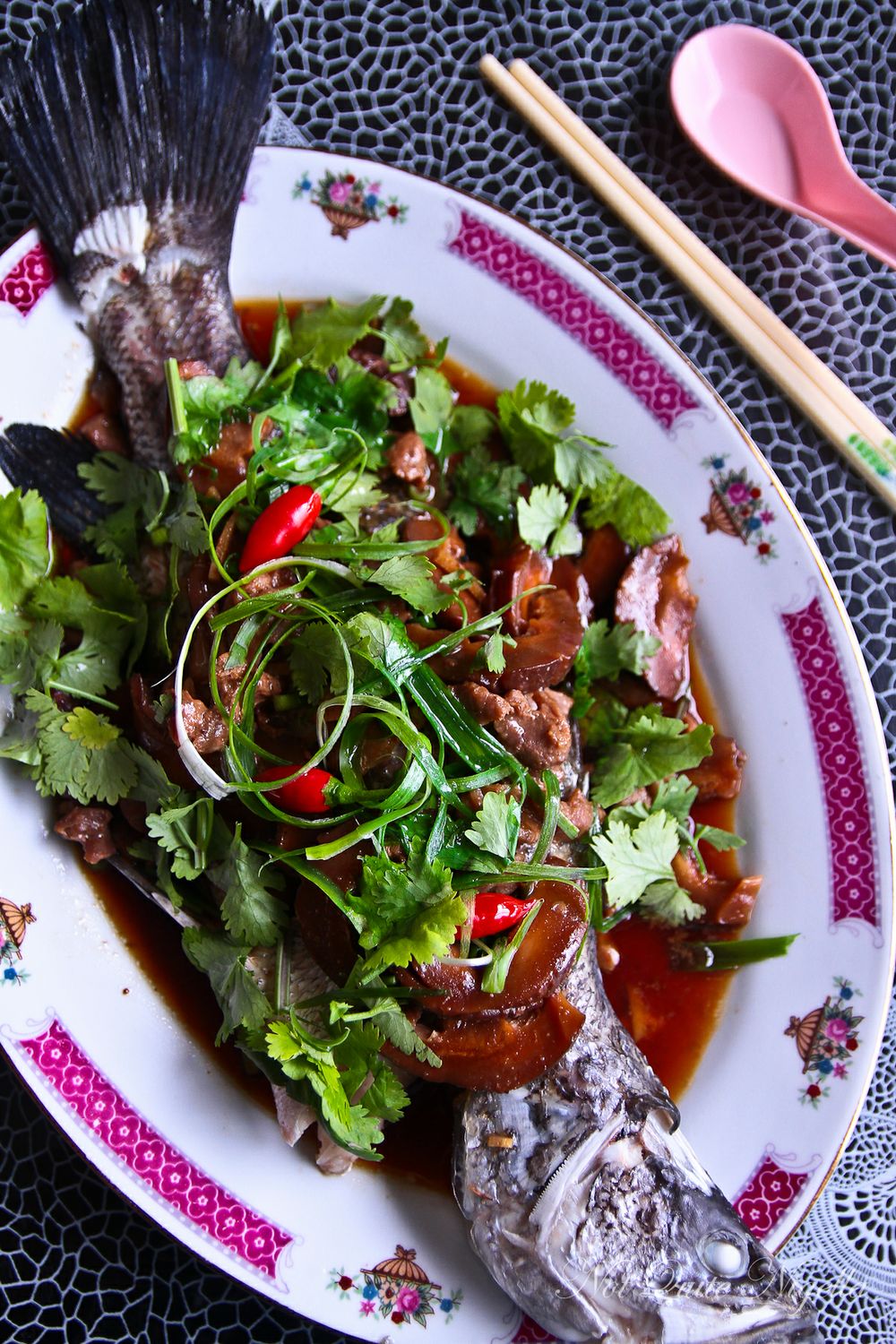