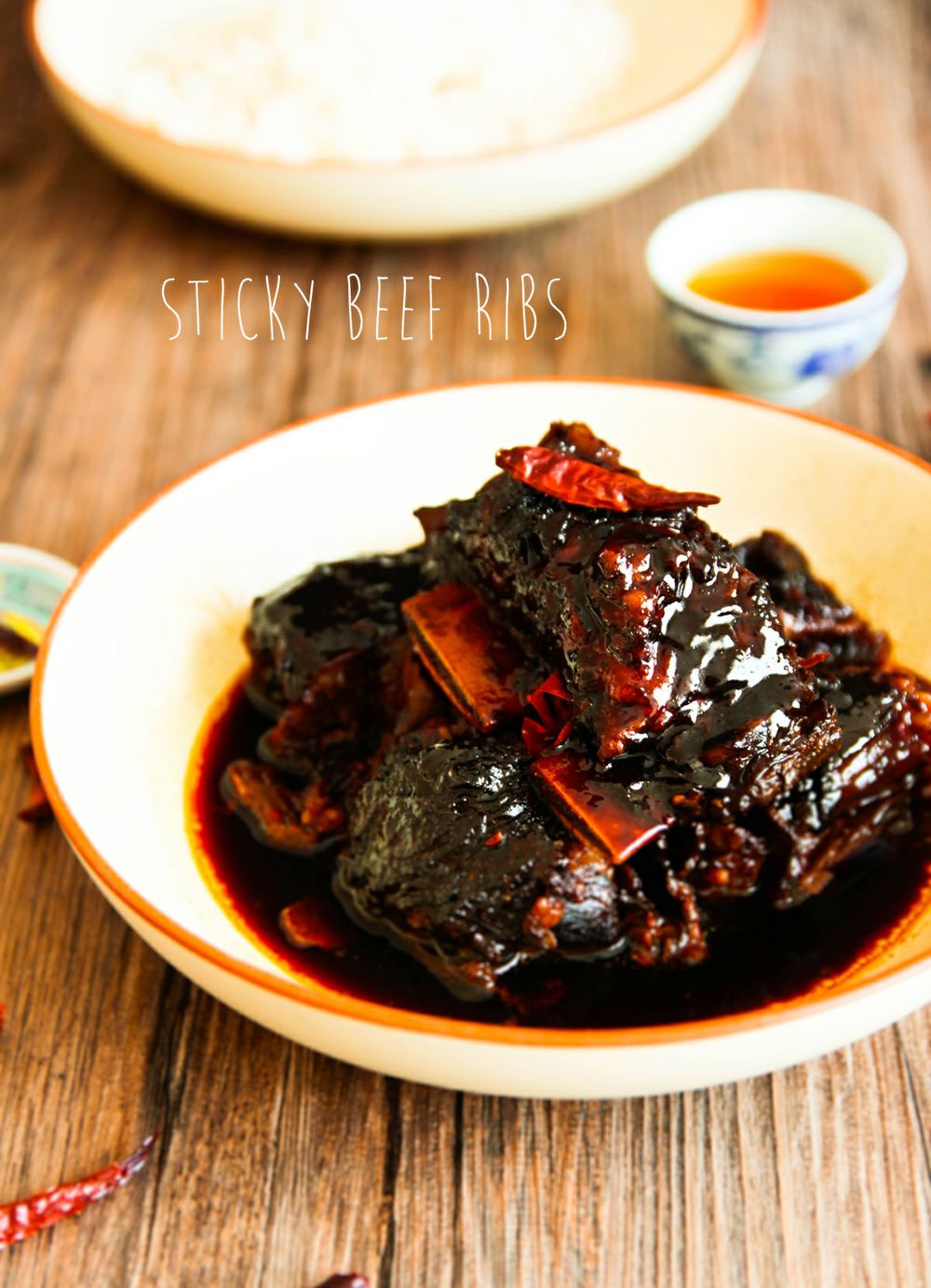 One evening during the recent fortnight of repetitive rain Mr NQN was sitting in the passenger seat of our car with me at the driver's wheel. I dislike driving in the rain as it creates another hazard and it causes pedestrians to pop out of nowhere and do unpredictable things. "Why don't you bring a potato with you?" Mr NQN asked grinning like a monkey. I knew that he was waiting for me to ask him what he meant and suitably intrigued I asked him to explain.

He explained that a friend of his who had his very own solution to having windscreen wipers that didn't work. When he would see rain in the upcoming forecast, he'd hunt under his sink for his bag of potatoes take one out, slice it and take it with him stashing it in his glove box. When the rain would start, he'd pull over and rub the potato on the windscreen and the starch in the potatoes creates a barrier between the glass and the water that repels the rain!

It was silly enough to be possible -and yes I did look it up when I got back and indeed it is although I have yet to test it as my windscreen wipers are in working order and my neighbours find me peculiar enough as it is....My tactic for the rain however is avoiding it unless absolutely necessary and barricading oneself in and cooking. So much so that the steam never seems to leave our windows as a result of me making dishes like this. 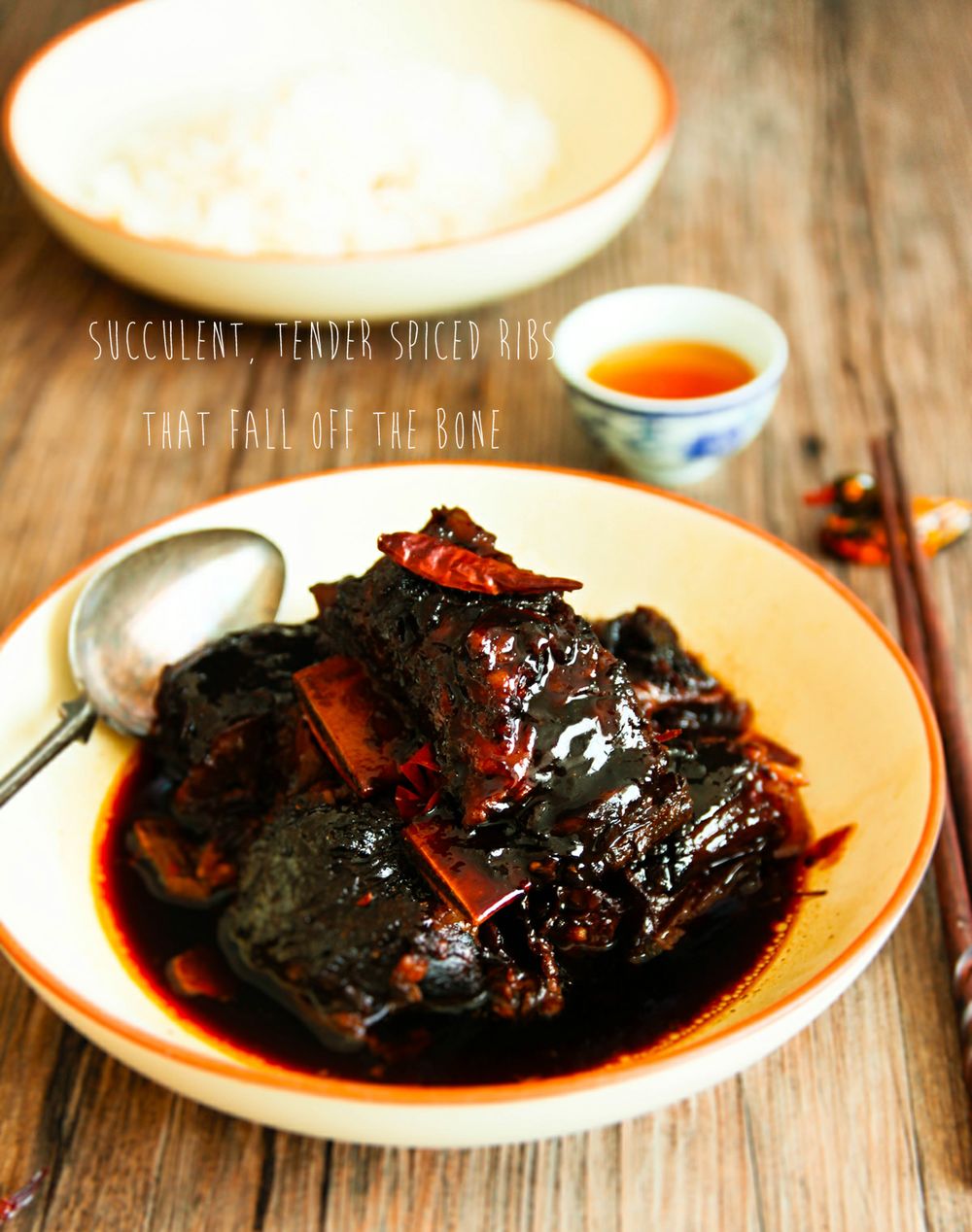 I have to admit that I never crave beef ribs in summer-pork ribs yes but hearty beef ribs are a winter dish for me and extending on that, a rainy day winter dish. This is a version of them that you can make on the stovetop, pressure cooker or slow cooker, all as successful as each other but just with the time required being the only difference. The best kind of beef rib is the kind that slips off the bone, perhaps even when you're lifting it up out of the pot. But the key to getting restaurant style beef ribs is to cook them twice. That way the soft meat gets another chance at infusing the marinade and you can easily skim off the fat from the top. It does require patience which I've never been accused of having but the flavour and texture changes make it absolutely worthwhile.

I flavoured these with Asian spices and flavours and gave them a sticky glaze at the end just because I'm a bit of a sucker for a glaze. It's like a final glossy coat when painting. I served them with boiled rice and a side of vegetables and this dish lasted us for several days (as did the rain). I even put some in sandwiches and froze some for some later jaffle making. All without leaving the house! ;)

So tell me Dear Reader, have you ever heard of the potato trick? 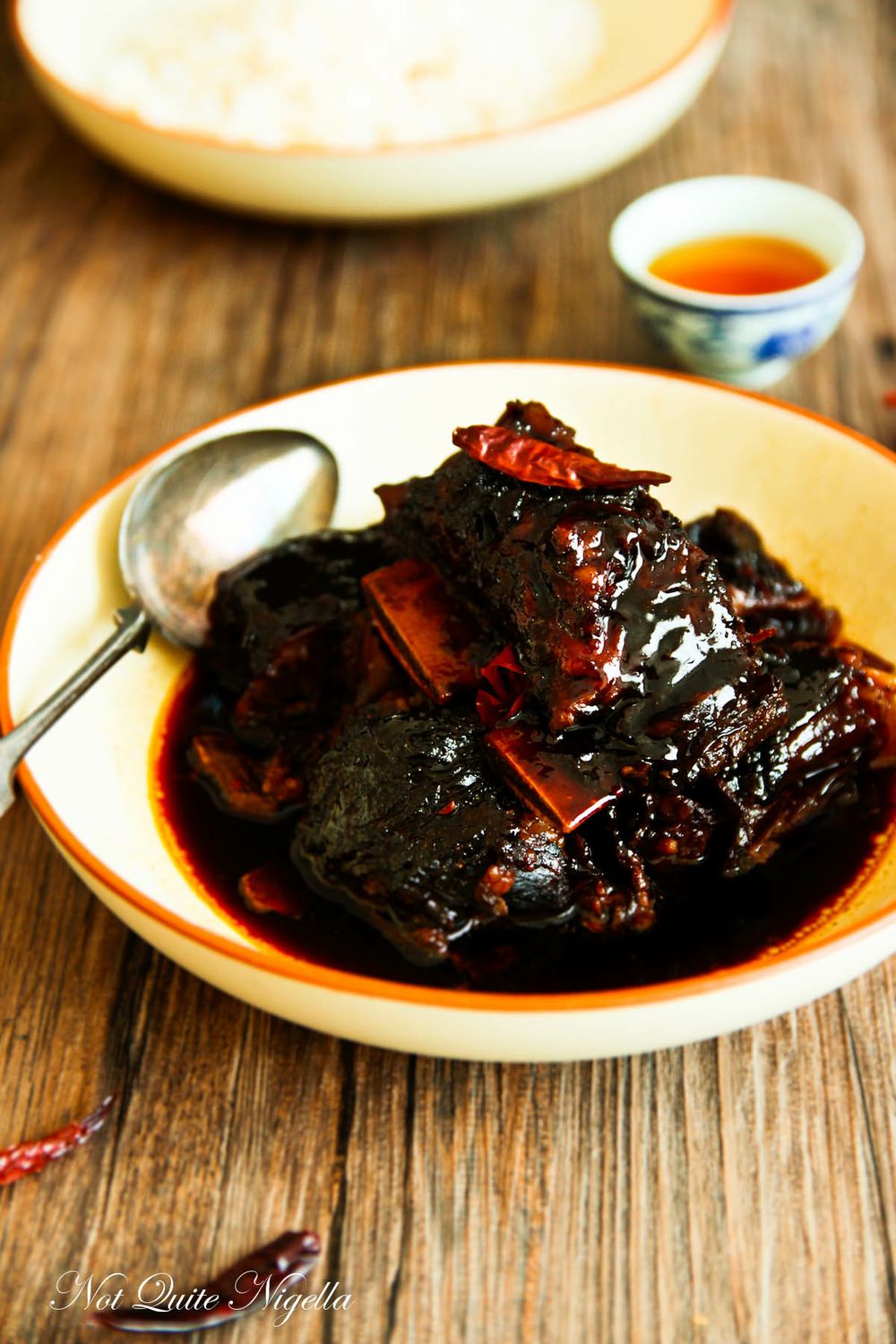 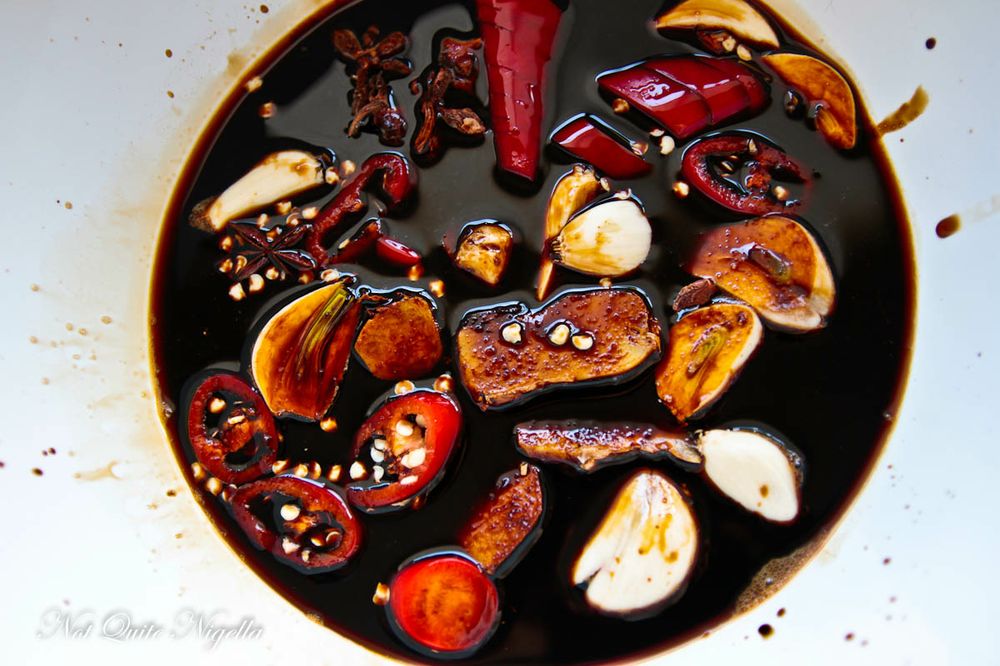 Step 1 - Mix the soy sauces, 1 cup of the brown sugar, 1 teaspoon of salt, garlic, ginger, star anise and chilli in a bowl and then marinate the beef ribs in the marinade for 1 hour. Drain the ribs, reserving the marinade for cooking. 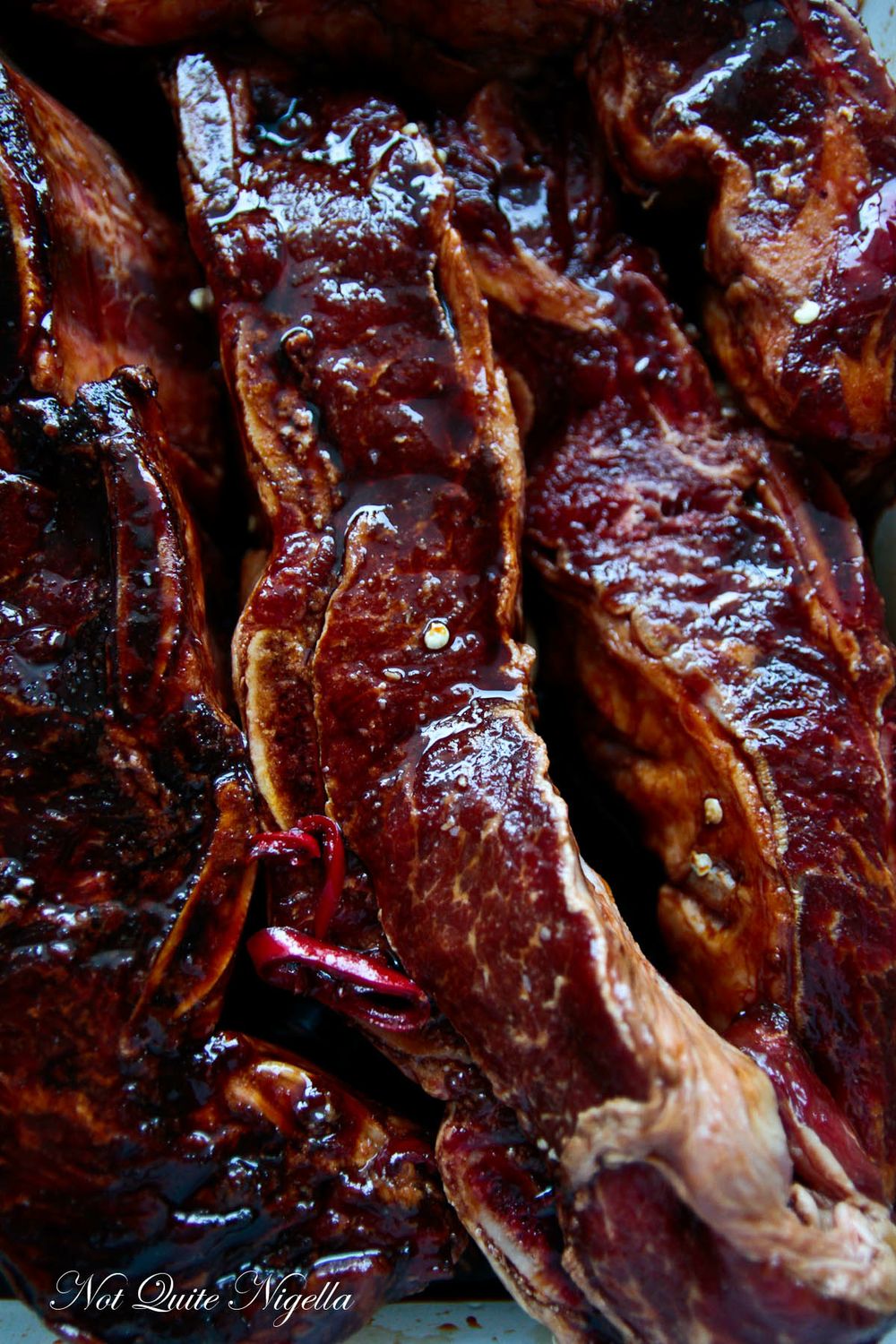 Step 2 - Heat a frypan on high heat and sear the beef ribs until browned on all sides. You can technically skip this step and put the ribs straight into the crock pot, pressure or slow cooker but it adds flavour to the meat. Mix the marinade with the 2 cups of water and place this and the ribs in a lidded cast iron pot, pressure cooker or slow cooker. For a pressure cooker, cook on high pressure for 1 hour. For a slow cooker, cook for 8 hours, for a cast iron pot, cook for four hours in a 160C/320F oven for 3 hours. 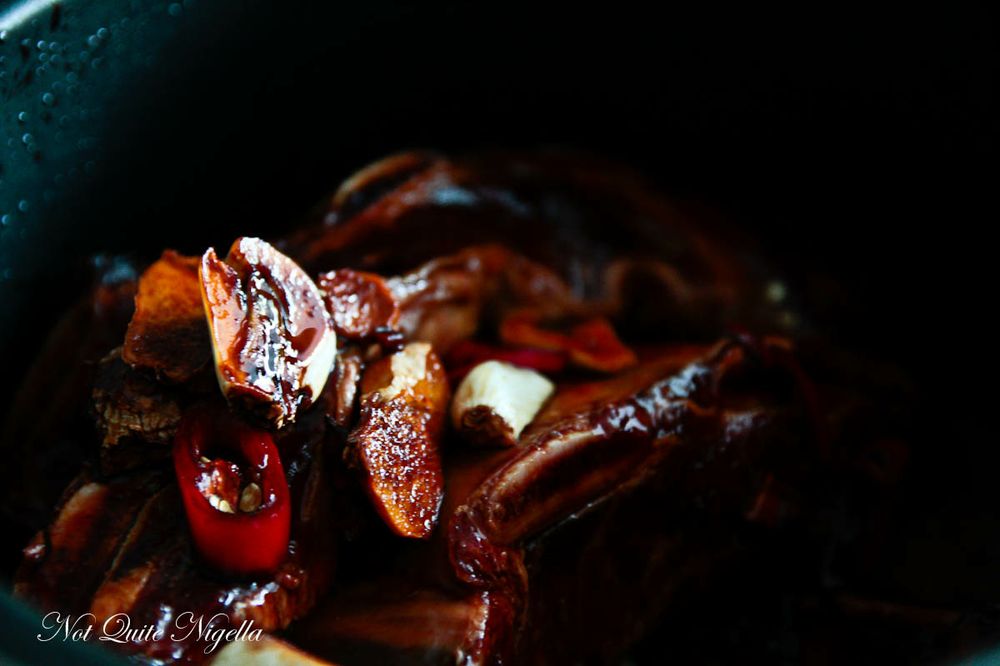 Step 3 - I find this next step easiest if I place the ribs in a snug container with just enough liquid to cover them. Cool the rest of the liquid in another container and refrigerate both overnight. The next day, skim the fat off the top and reheat and serve with rice if you don't want to make the glaze. If you are making the glaze, take 500ml of the liquid to make the glaze and place in a saucepan and heat with the extra cup of brown sugar and rice wine vinegar-taste and add more salt if needed. Reduce down to a syrupy glaze. Heat the ribs in about 1 cup of the liquid and then brush with the glaze. The remainder of the liquid can be frozen and used as a Chinese Masterstock.