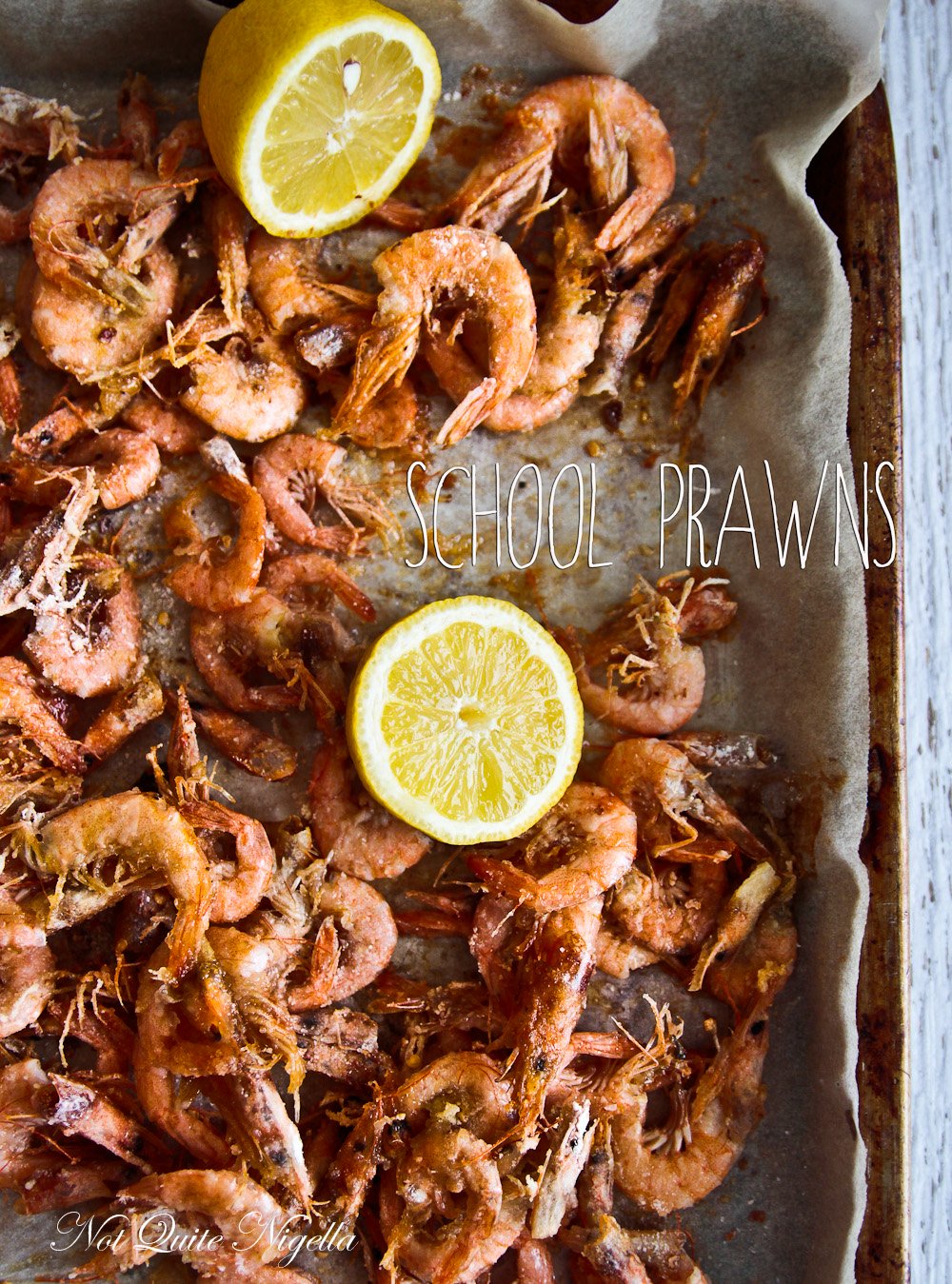 When my parents talked to their peers with children and they complained that their children wouldn't eat this or that, my parents would just nod their head and smile. You see they never had any such problems with my sister and I. Voracious eaters since birth, you'd probably have to force something out of our mouths rather than in.

Their tactic was simple (and I'm not making light of any situations where children that won't eat, we all know some of them). They'd put dinner down and we'd help ourselves to what we wanted and their line to us was this:

"Don't want done!" they would answer and that was it. It made it a bit more final and to an eager eater, no more of anything was a fear. So there was more "want" than "don't want" and well, we haven't stopped eating since.

One food that I didn't like to eat when I was little was prawns or shrimp. Actually I wasn't taken with any seafood then and look where I ended up - being labelled a "seafood monster" because my love for the stuff. I certainly wouldn't have eaten this dish then because it contained prawns with their head on no less. I have to admire kids today that eat all sorts of things like sushi because I wouldn't have touched them as a child. But I would have been missing out as these tiny school prawns are so fabulous. Now that they're in season from October to April we are seeing them pop up at restaurant menus all over town. 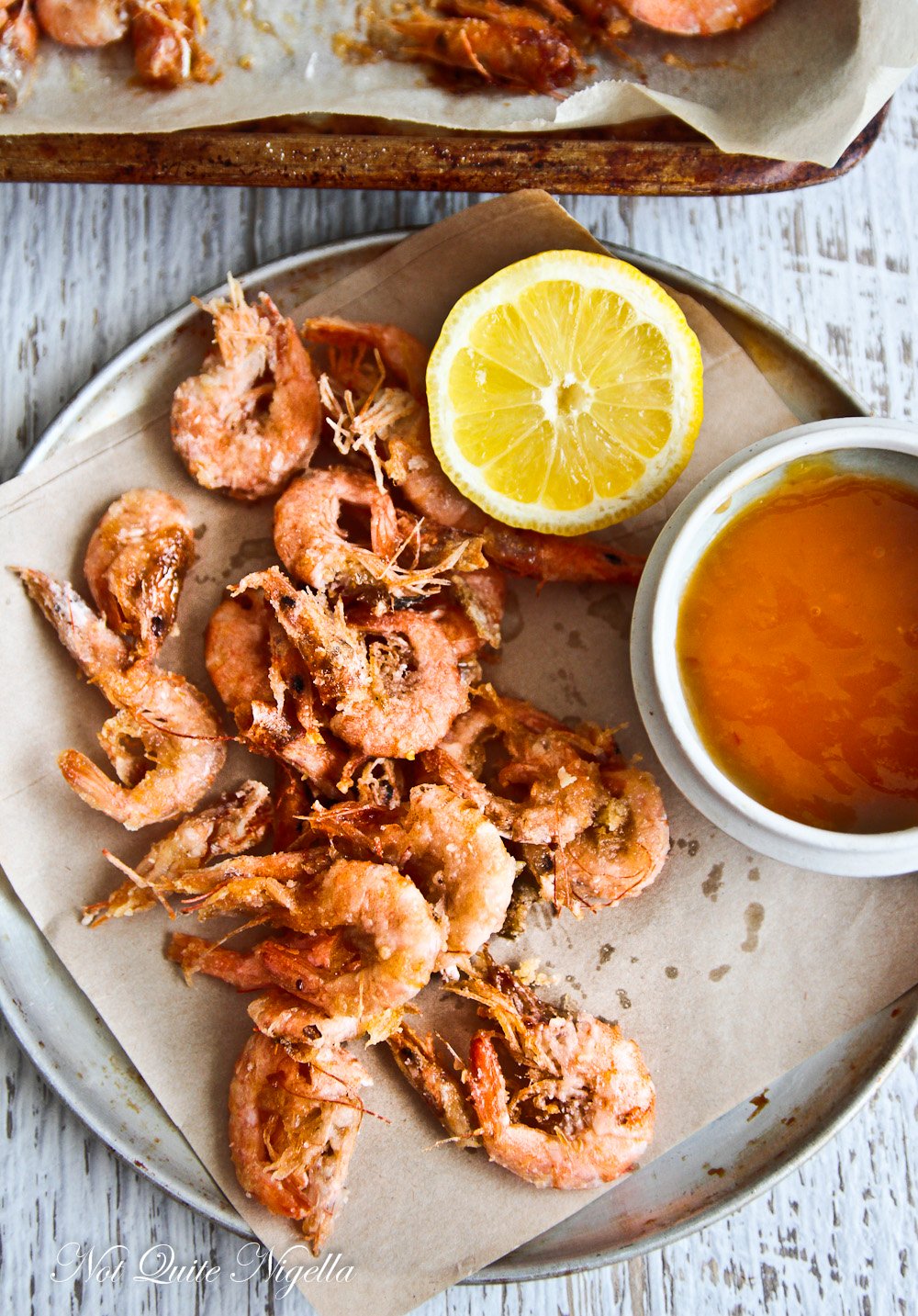 School prawns are very well priced at around $12 a kilo and you can eat them shell and all. Head and all too if you're game. The head is where all the flavour is and sitting outdoors sharing a bowlful of these crispy beauties is one of my favourite ways to spend a warm day. It's a great group party snack in the same way that chips or crackers are.

School prawns are usually deep fried until crisp but I do have a deep frying phobia (pertaining to both ass expansion and oil splatter). I decided to experiment and see if you could make these crispy in the oven or by shallow frying on the stovetop. The latter was spectacularly unsuccessful and Mr NQN called them "Funny looking, but not haha funny" and they just didn't crisp up.

But the oven baked ones were completely delicious. They take just over five minutes to cook and I served them with a fabulous South Coast Providores Mango and Chilli sauce. This was a sauce that I picked up during my trip to Berry on Jacqueline's fantastic food tour. Carole makes all of her sauces and preserves in small batches by hand and it was the perfect accompaniment to the crispy lemony prawns.

And if you don't want, that's ok, Mr NQN will gladly finish your serve!

So tell me Dear Reader, are their foods that you just wouldn't have eaten as a child but you enjoy now? And prawns heads - yay or nay? 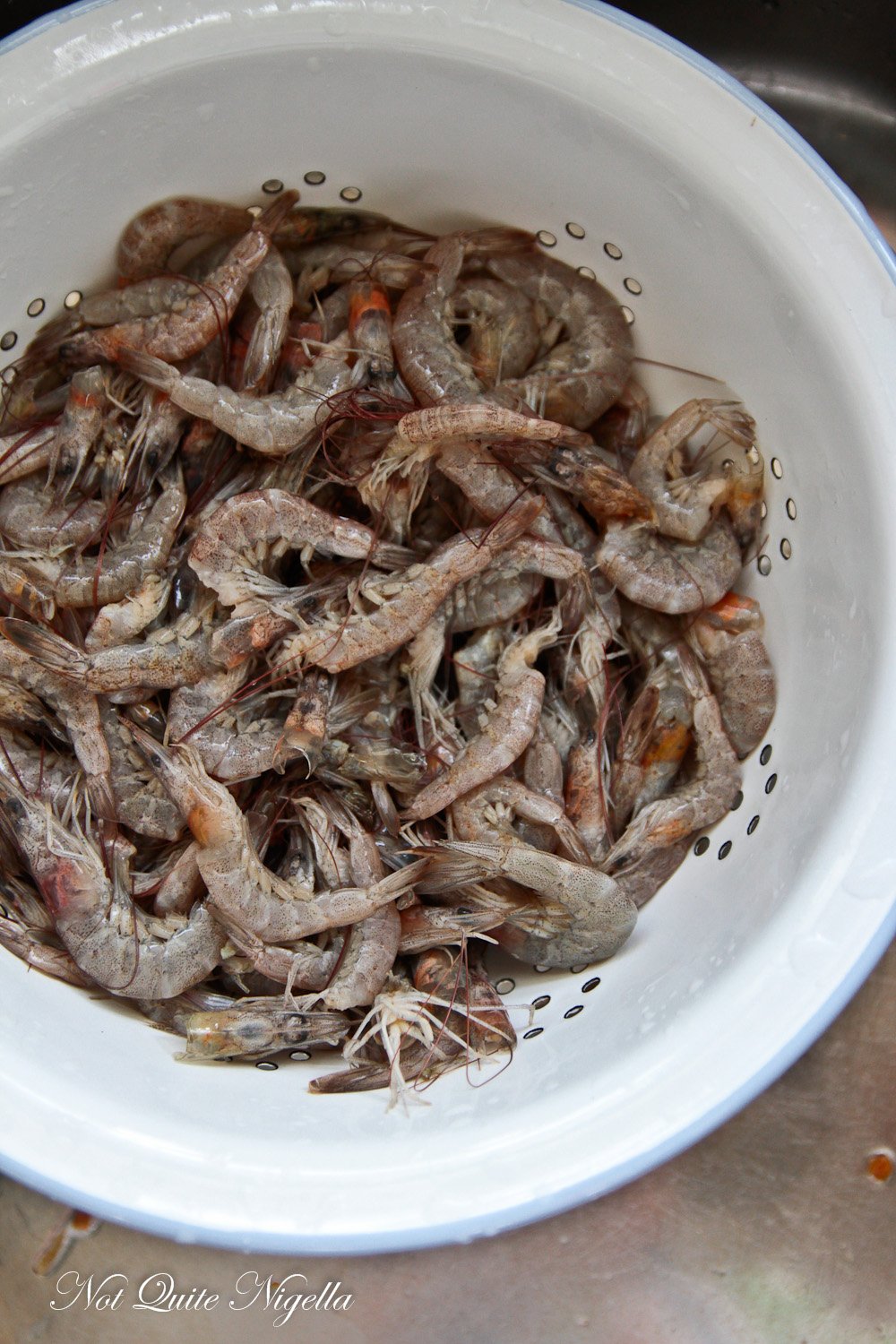 Step 1 - Preheat oven to 235C/455F and line two baking trays with parchment. Remove the long feelers from the head of the prawns. This is the only fiddly part and I found I did this mostly while the oven was preheating. 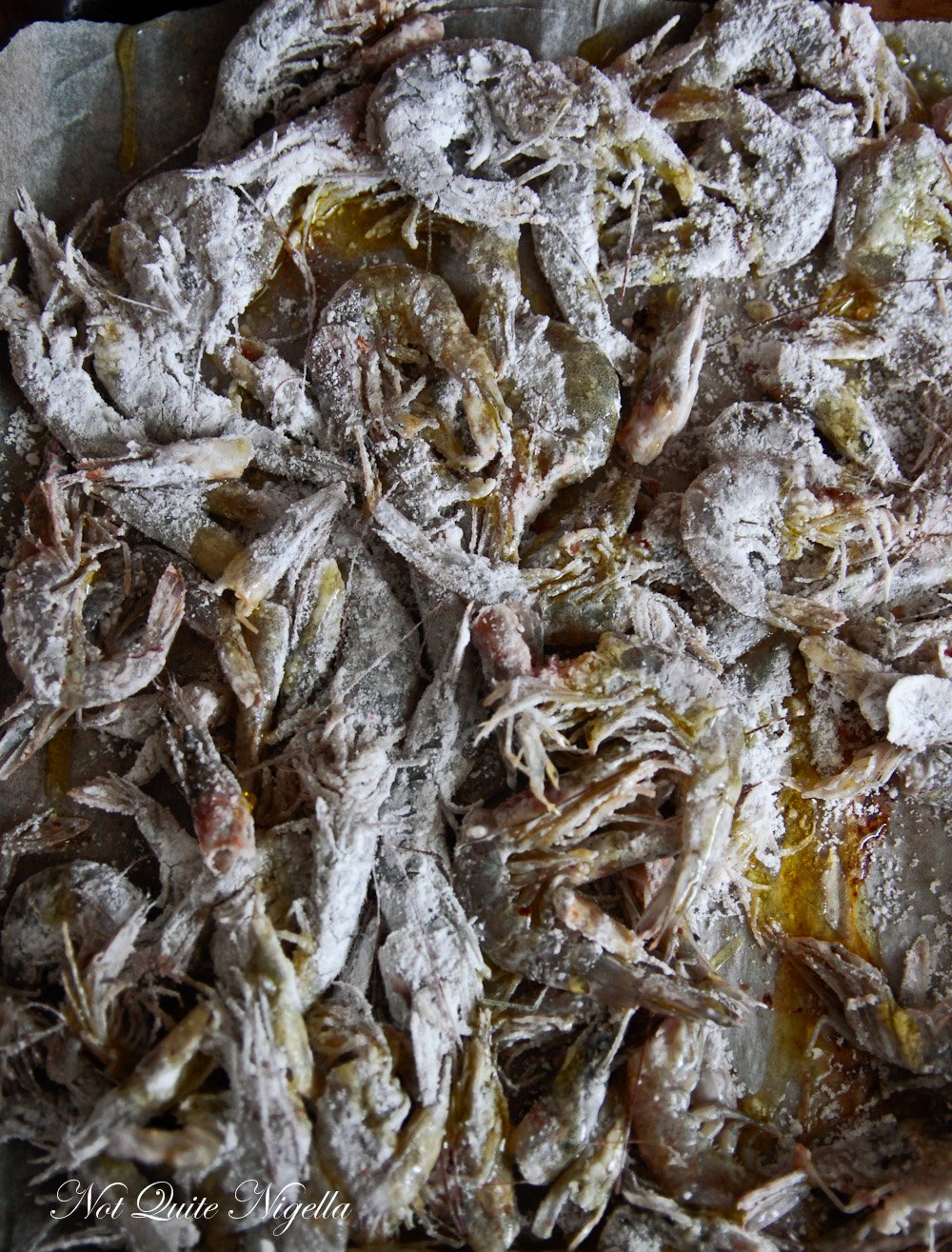 Step 2 - Place the tapioca starch and salt into a large zip lock bag and shake to mix. Add the prawns to the bag and toss well. Empty into a colander and shake off excess flour. Place on a single layer on the prepared baking trays and drizzle with four tablespoons of oil. Just over the top is fine and you don't have to completely coat the prawns. 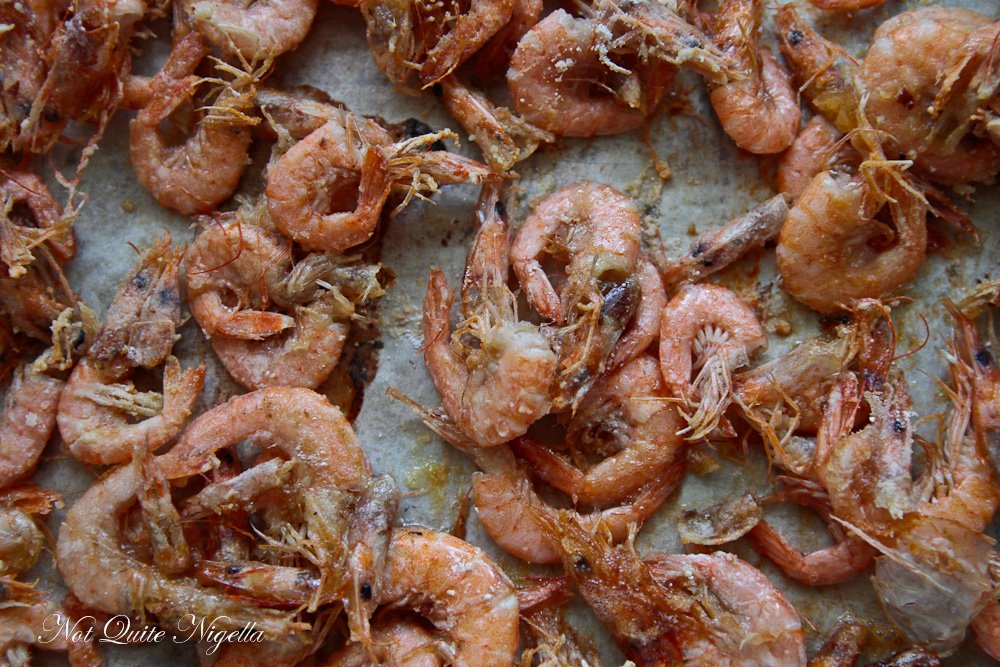 Step 3 - Bake in the oven for four minutes. Remove from oven and turn over the prawns. Some bits might be white from the flour and just add a bit more oil to those. Return to oven for another three minutes. Sprinkle salt over and serve with aioli or seafood sauce.