The Potting Shed At The Grounds, Alexandria 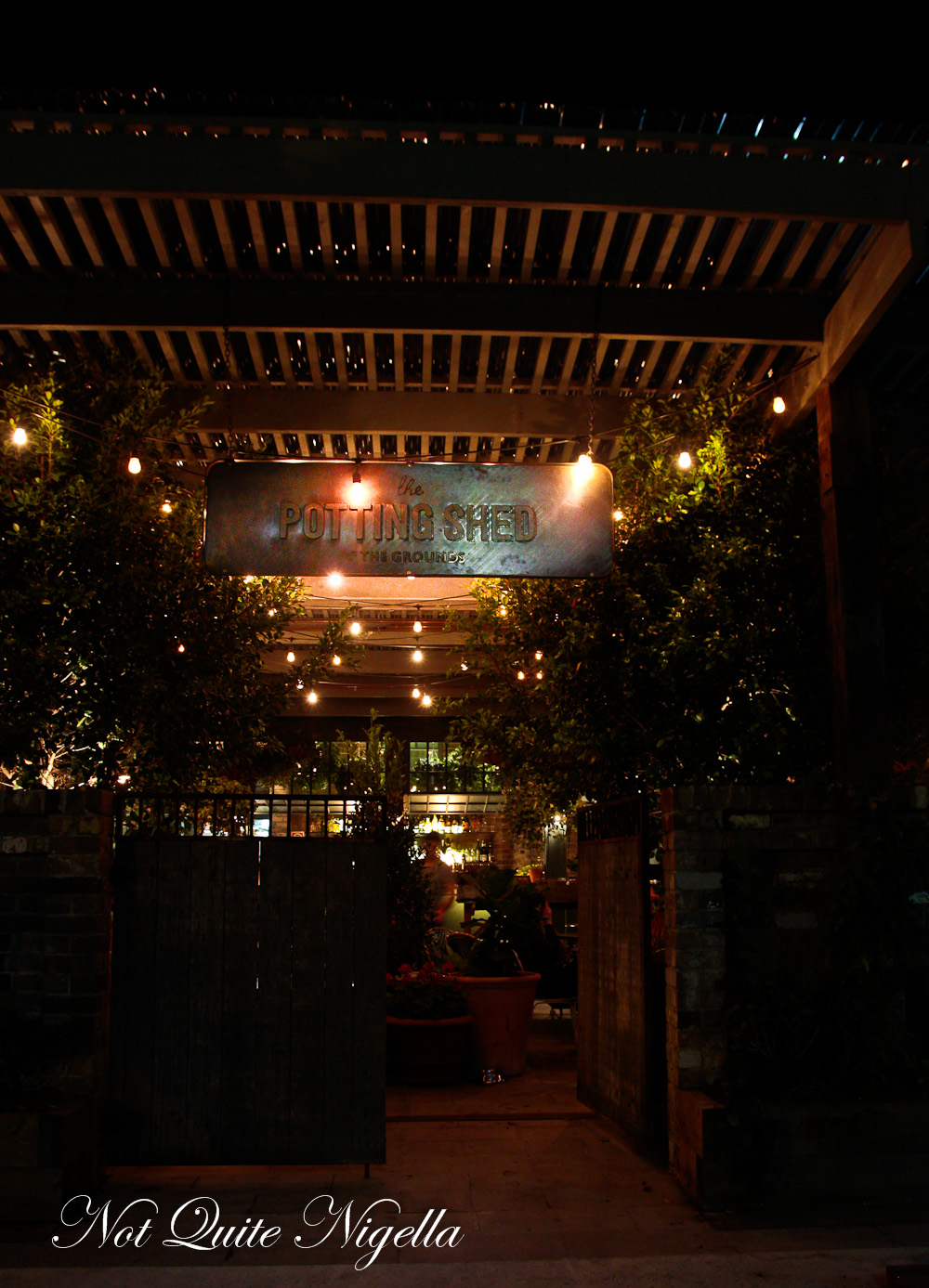 It was the public holiday/Monday night dining out dilemma. You know, when you want to dine out but it's hard to find somewhere open because Monday nights are the hospitality industry's version of a short lived weekend. Not only that but it was Easter Monday too. So when the challenge was set to find somewhere good to eat Belinda came up with the idea of visiting The Potting Shed, the new bar restaurant from the people at The Grounds in Alexandria. 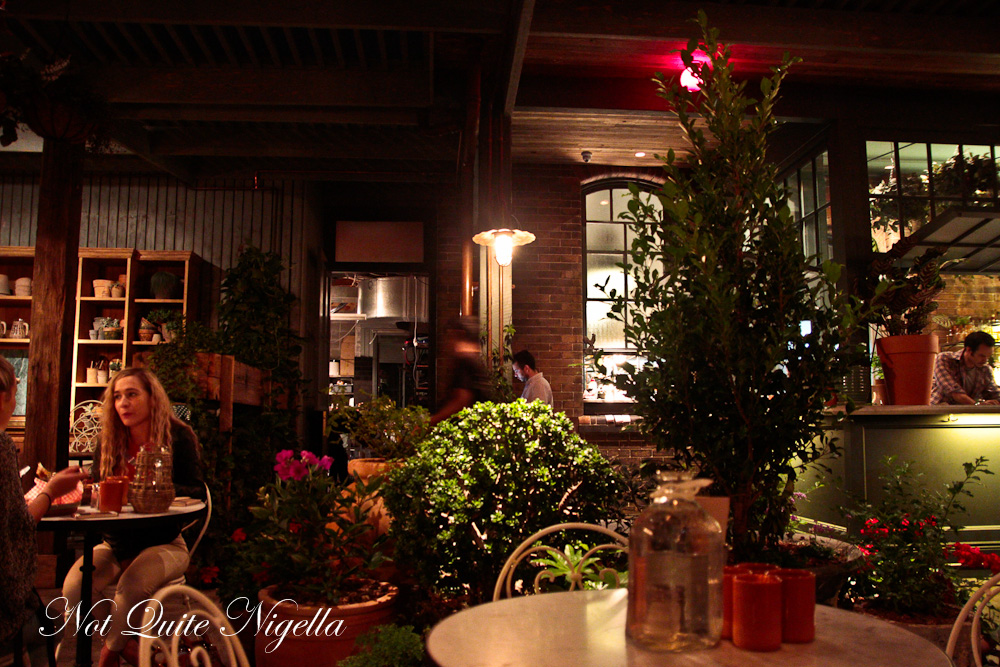 Located just behind the small carpark and situated between The Grounds and Salt, Meats, Cheese it's said to be best visited at night although it is open from 11:30am 7 days a week. At night, the lights sparkle, the atmosphere has touches of romance but the music and atmosphere is also suitable for groups. 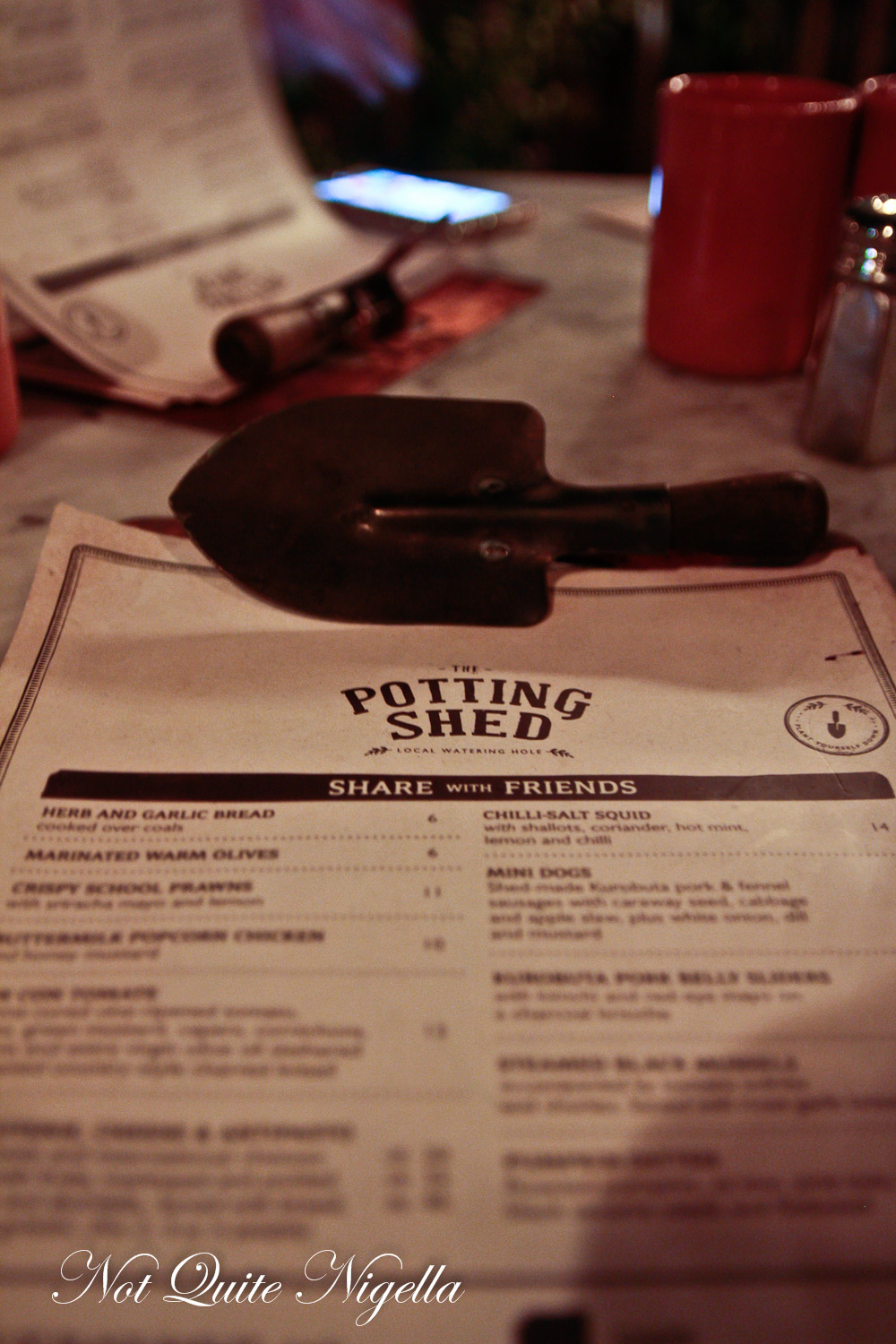 The Potting Shed theme continues to the table settings to the shovel topped copper clipboard menu to the food. Belinda and I take a seat against a banquette and Nick promises to join us for dessert. Service is very friendly and staff seem genuinely interested in ensuring that diners are happy asking us how our day has been and never rushing us to order. 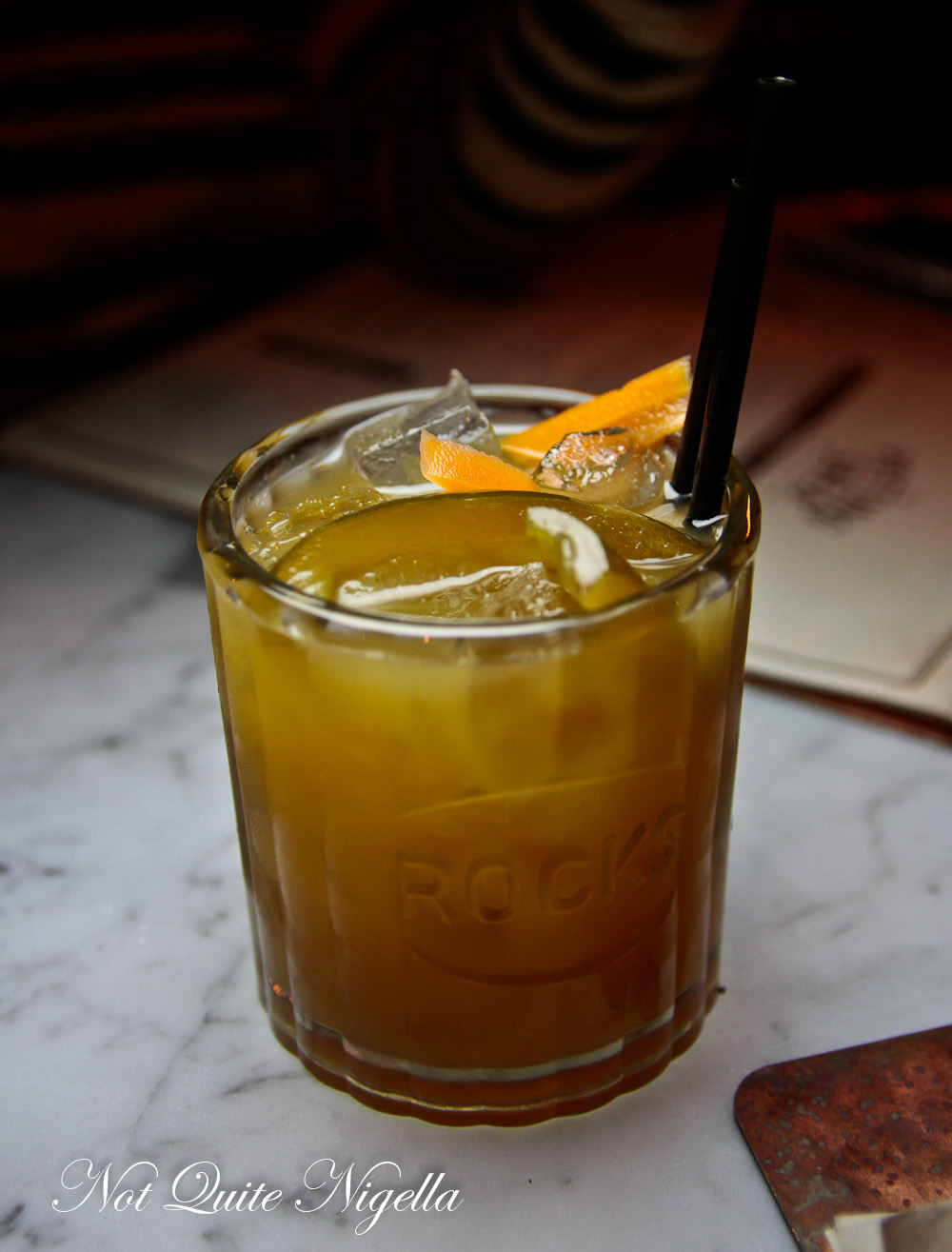 Belinda orders a cocktail and it's a mix of Ketel one vodka with wasabi, chilli mustard, pineapple, coriander and cucumber juice. She adores the spicy kick and the pronounced pickle flavour of the cocktail. It's unique but delicious, particularly the pickles themselves. 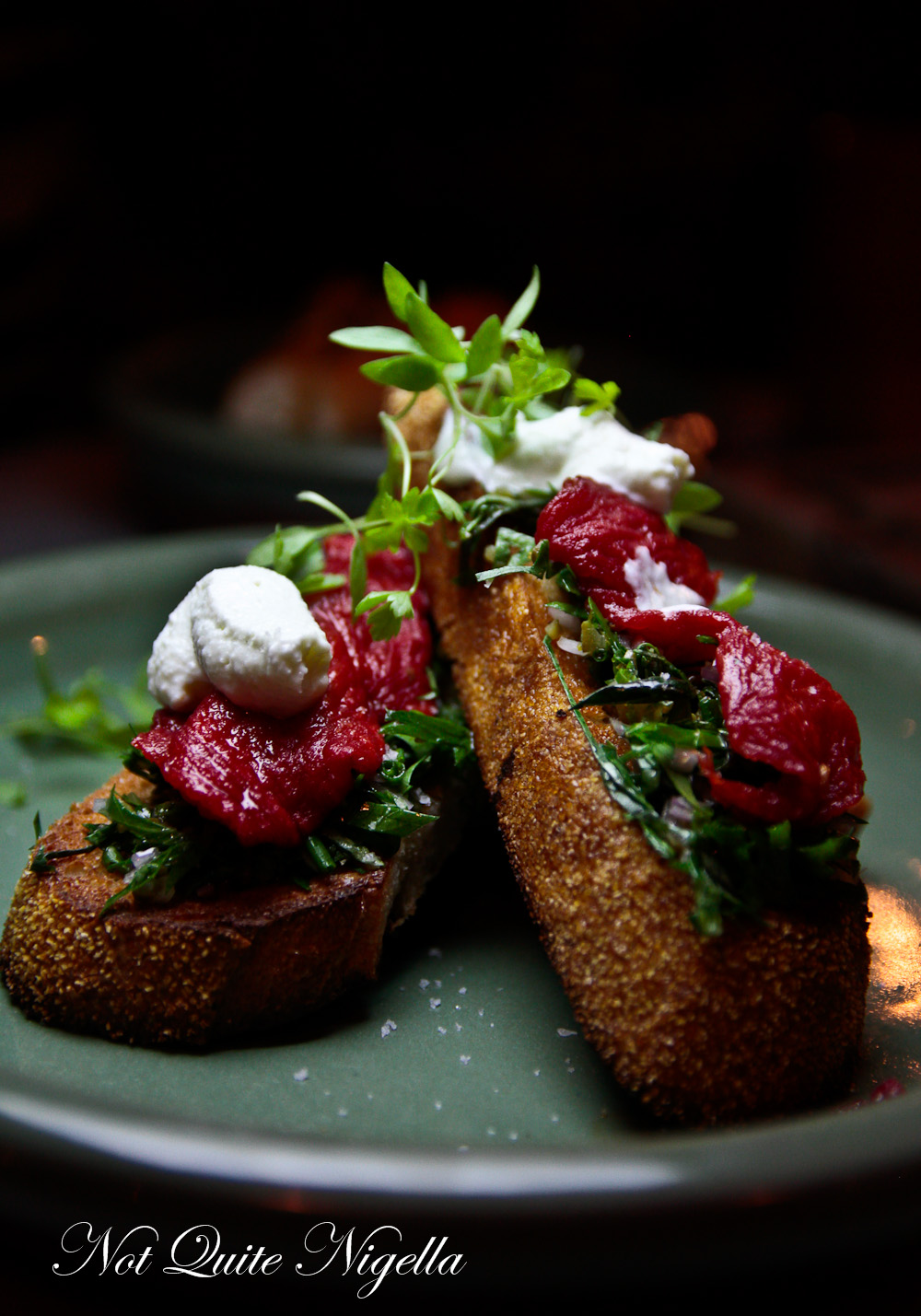 Going with our waitress's recommendation, we start with the Pan Con Tomate. I was expecting tomato bruschetta but this is so much better. It comes as three pieces of crunchy country style bread topped with thyme cured vine ripened tomatoes, chives, green mustard, capers and cornichons. The intensity and sweetness of the tomatoes is so appealing and I wish we had a whole plate of these to nibble on. 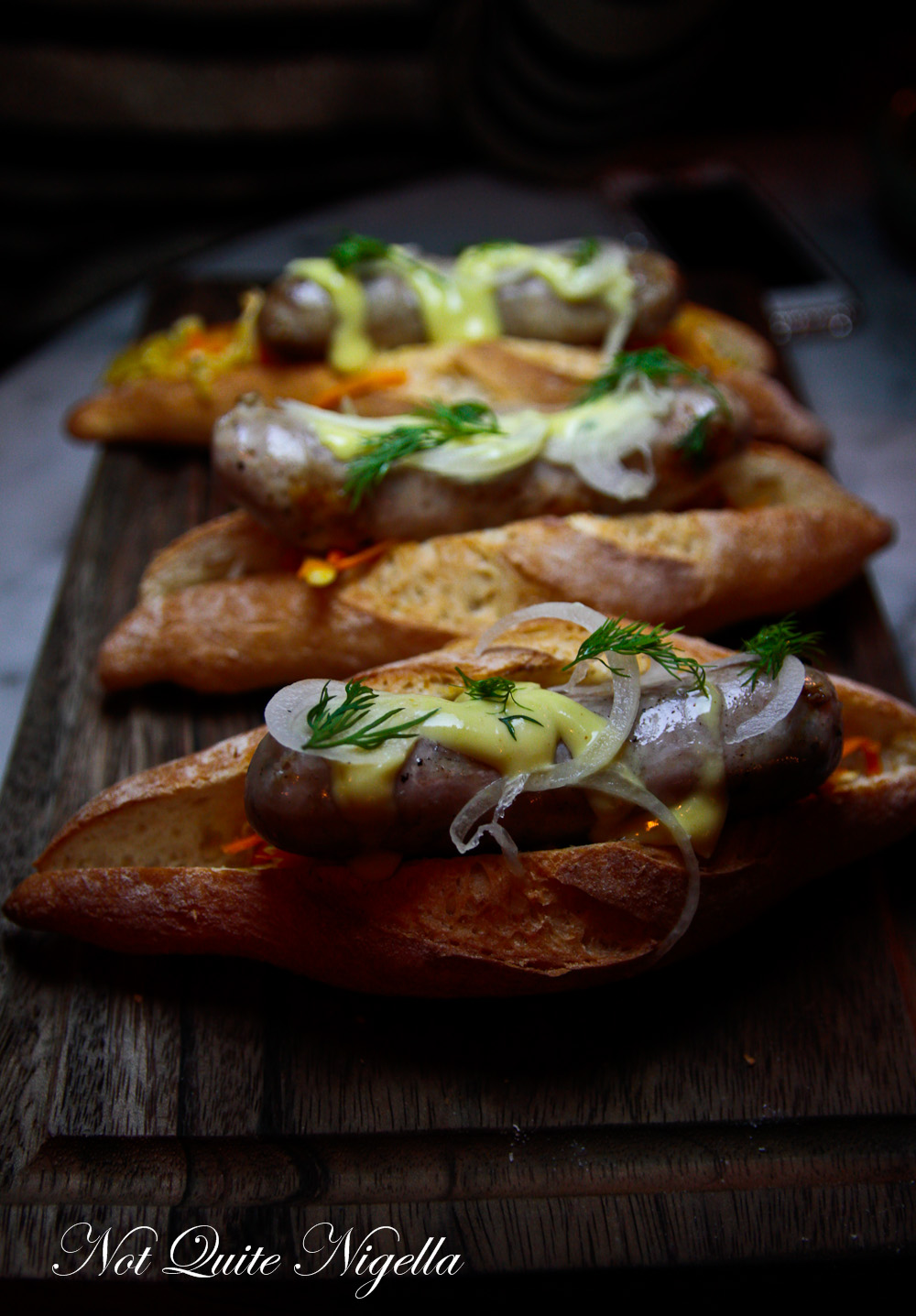 The mini dogs come in a serve of three large hot dog in fresh, chewy epi rolls. The Kurobuta pork and fennel sausages are "shed-made" which is code for house made and are strong in fennel and caraway seed. They're served on a light bed of cabbage, carrot and fennel slaw with white onion, dill and mustard. After just our entrees, I'm filling up quickly. 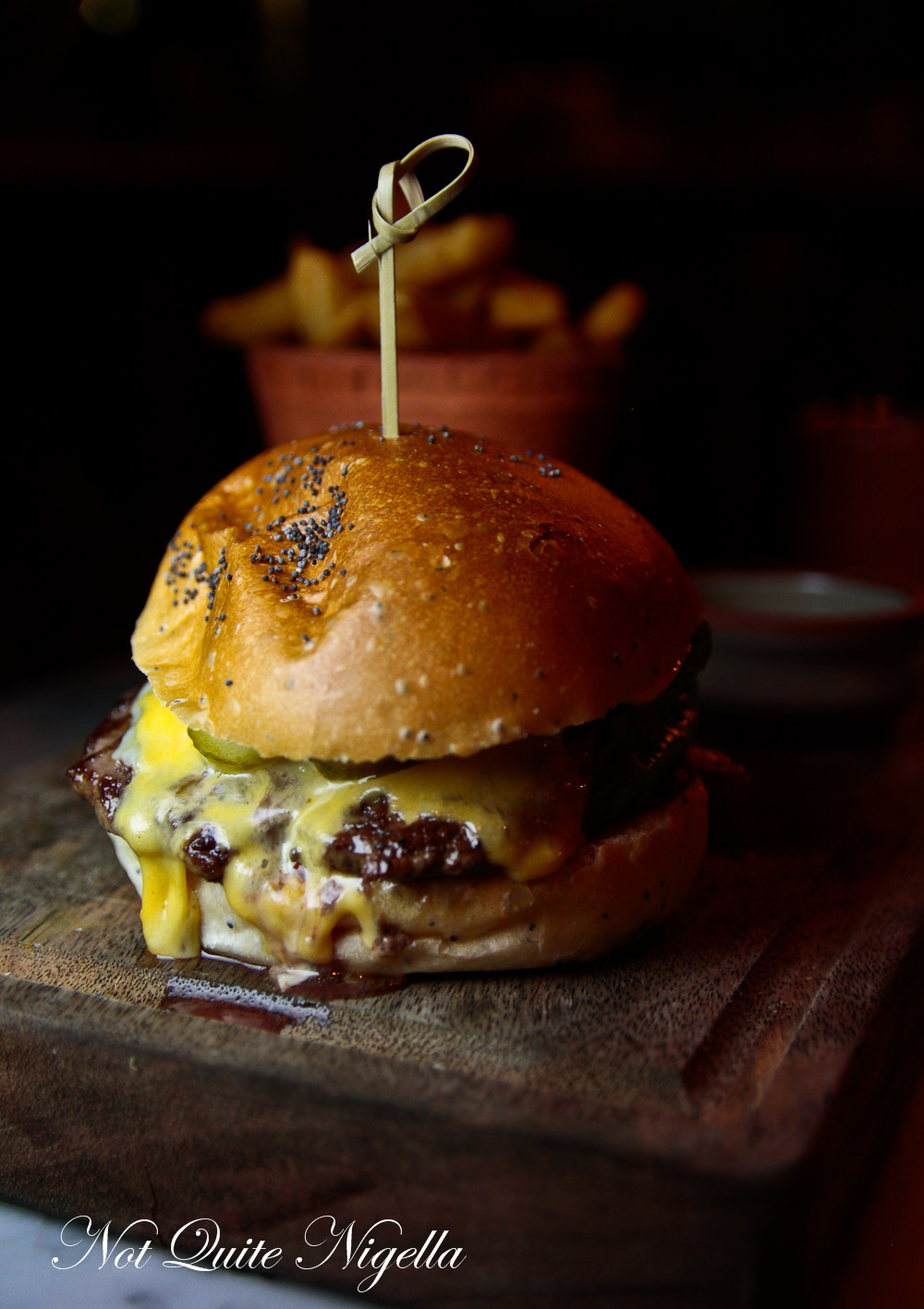 Of the mains, the Pansotti which is said to be the signature dish is sold out - apparently they had a very busy day with customers today. The patty in this cheeseburger is made using David Blackmore full blood wagyu with shed-made dill pickles, mustard seed onions, lettuce and cheese on a burnished poppyseed bun. The filling is fantastic but the roll isn't quite right for the burger with the bun being a touch too thick and dense for it. The fries served in a terracotta pot with a honey mustard dressing are excellent. 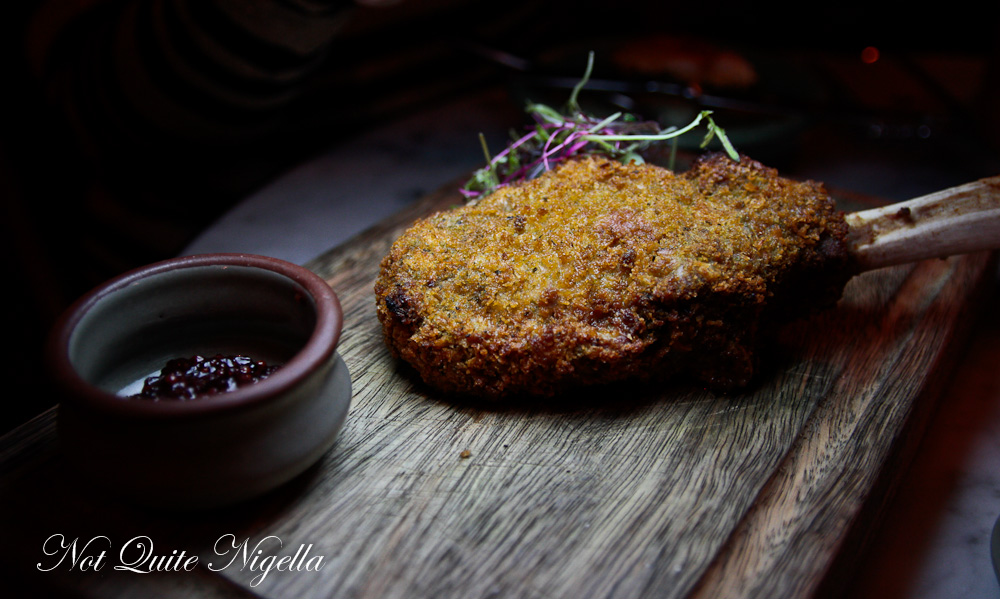 The veal cutlet is served medium and is wonderfully tender albeit under-seasoned. The crumb crust is dark bronze and crunchy and if anything, it benefits from the honey mustard sauce from the wagyu cheese burger. It also comes with braised cabbage, spiced plum halves and a cherry and mustard jam which makes it perfect winter food. 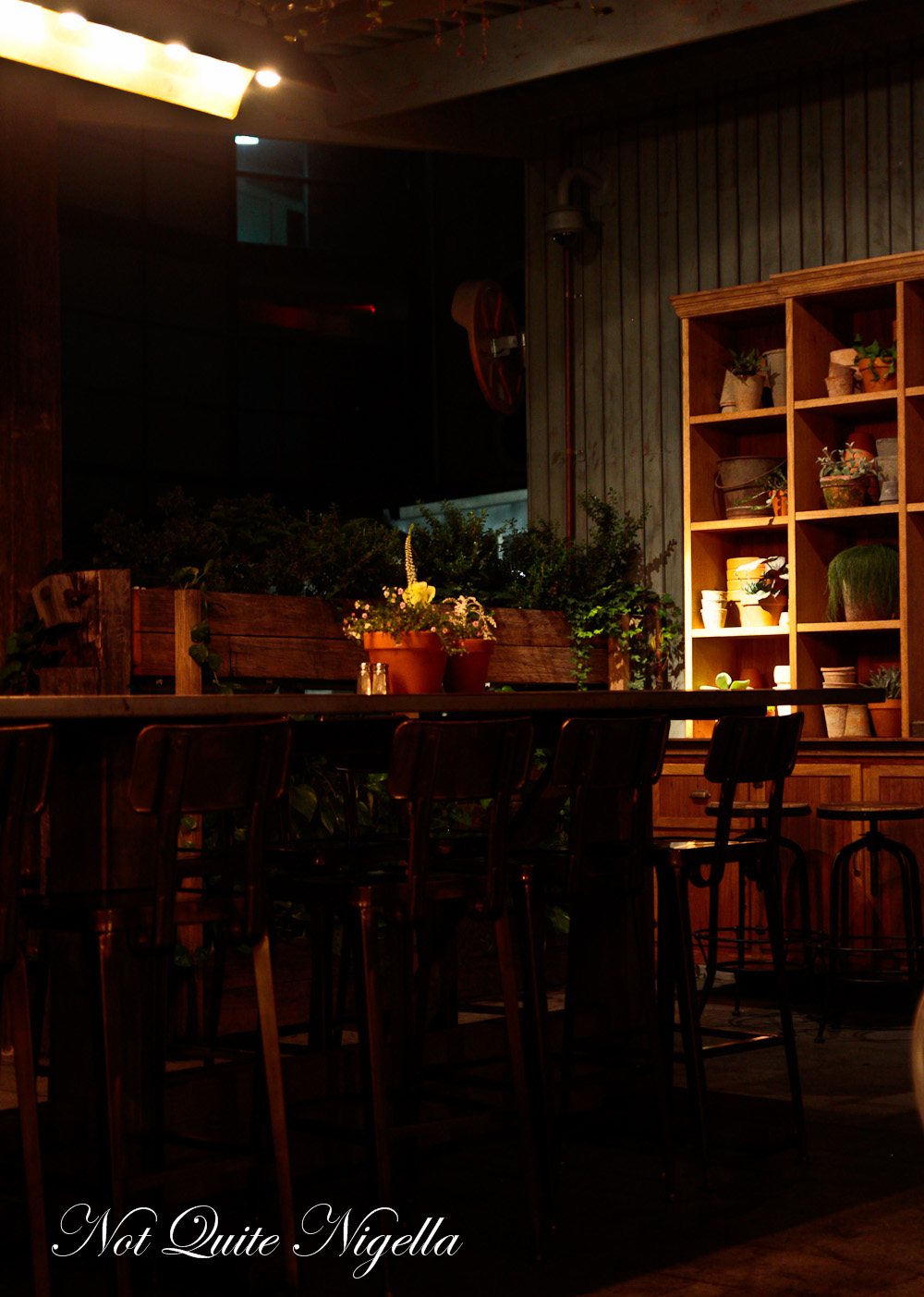 Nick arrives just in time for dessert. There is one thing about The Potting Shed that is unusual and that is the absence of tea and coffee. To get coffee you need to get it takeaway while The Grounds is still open but at night, it is closed. Nick would like a peppermint tea with dessert but they don't have even tea. 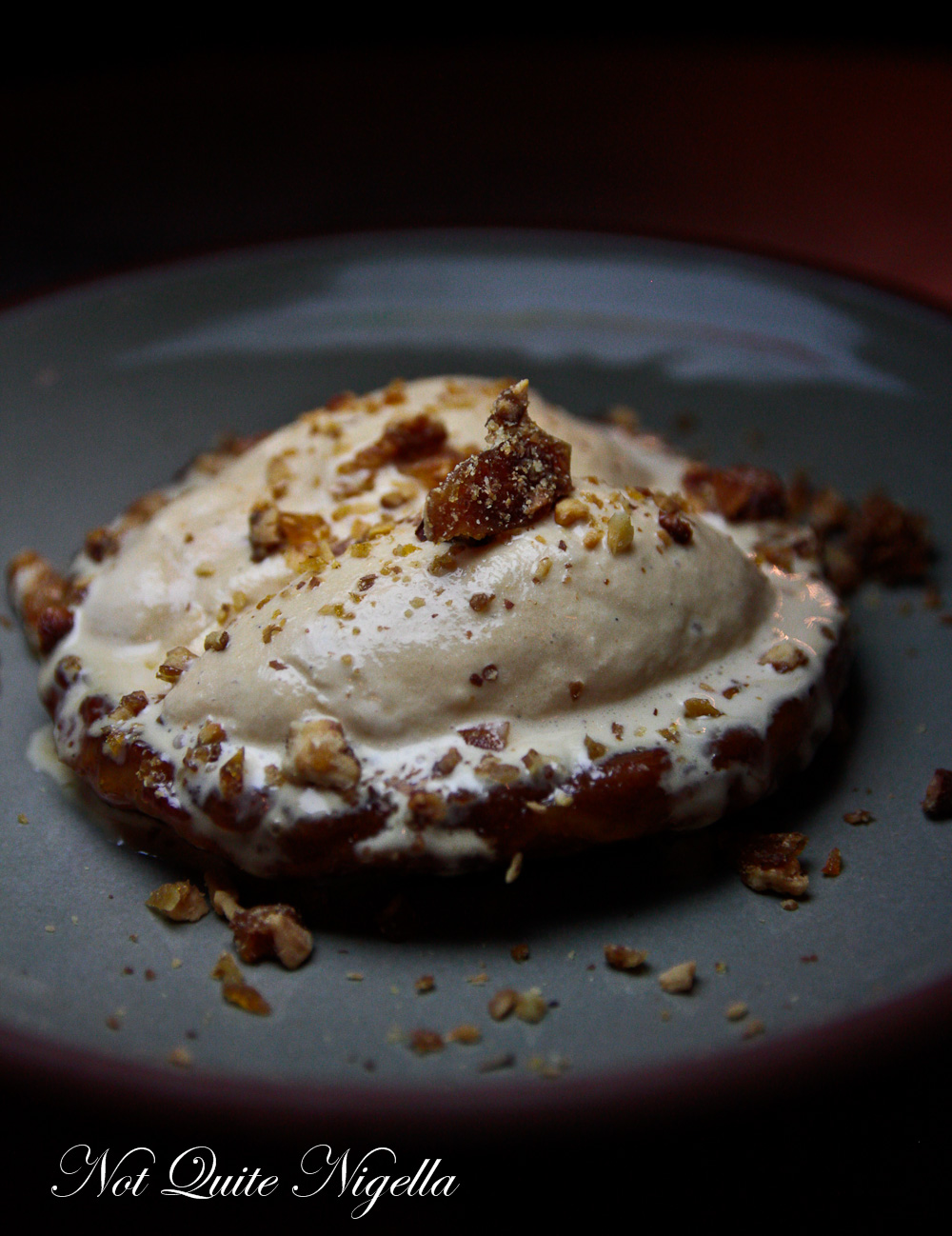 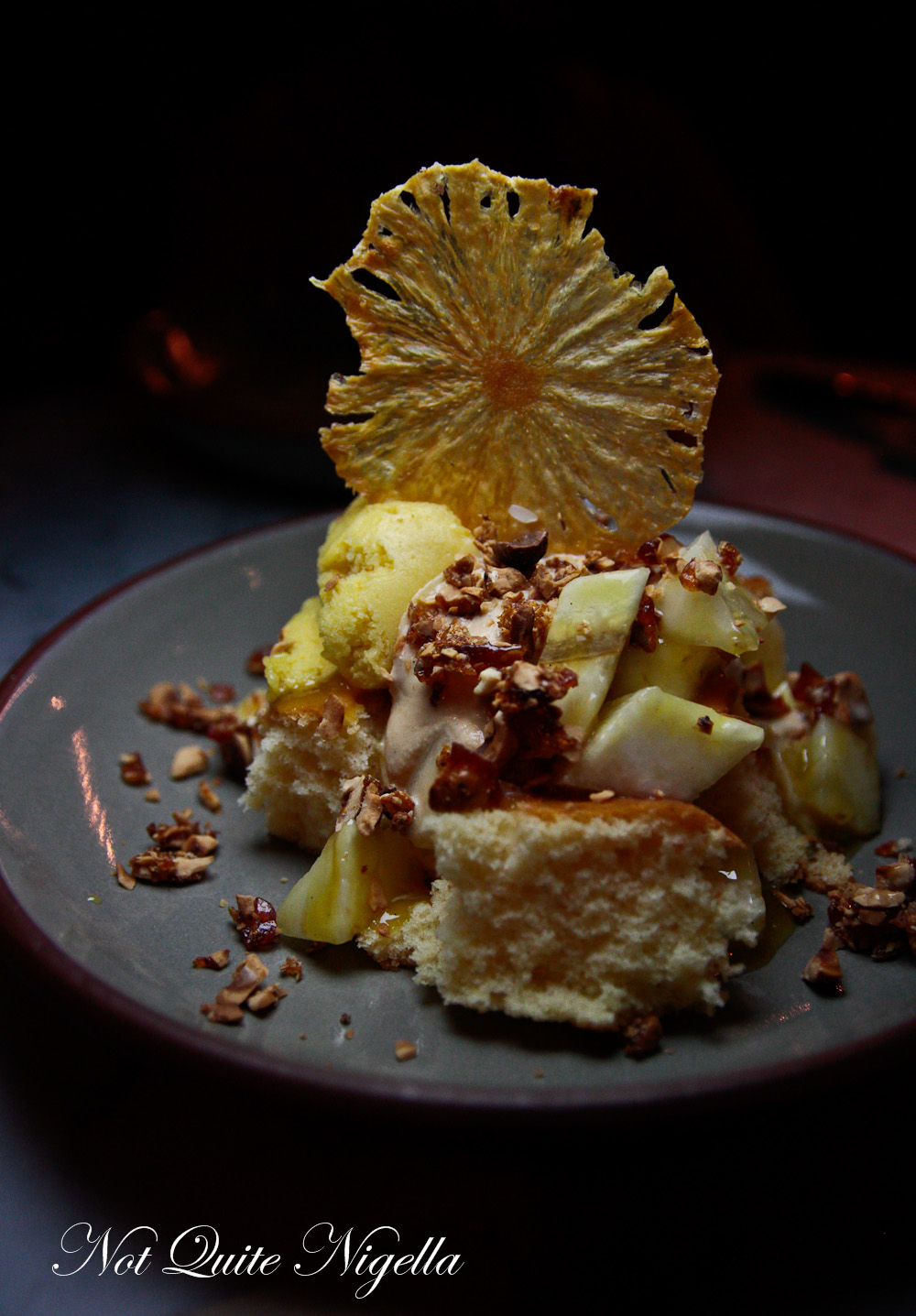 We are a bit confused when this arrived because it doesn't look like an ice cream sundae. It also doesn't have any mango, instead they have replaced it with banana along with the pineapple. There isn't quite enough salted caramel ice cream so it ends up being mostly sponge cake and candied nuts with tart pineapple pieces. When they take it away they ask us about it and when we explain that it was fine but there was no mango and not quite enough ice cream and they are nice enough to comp it without us even asking. 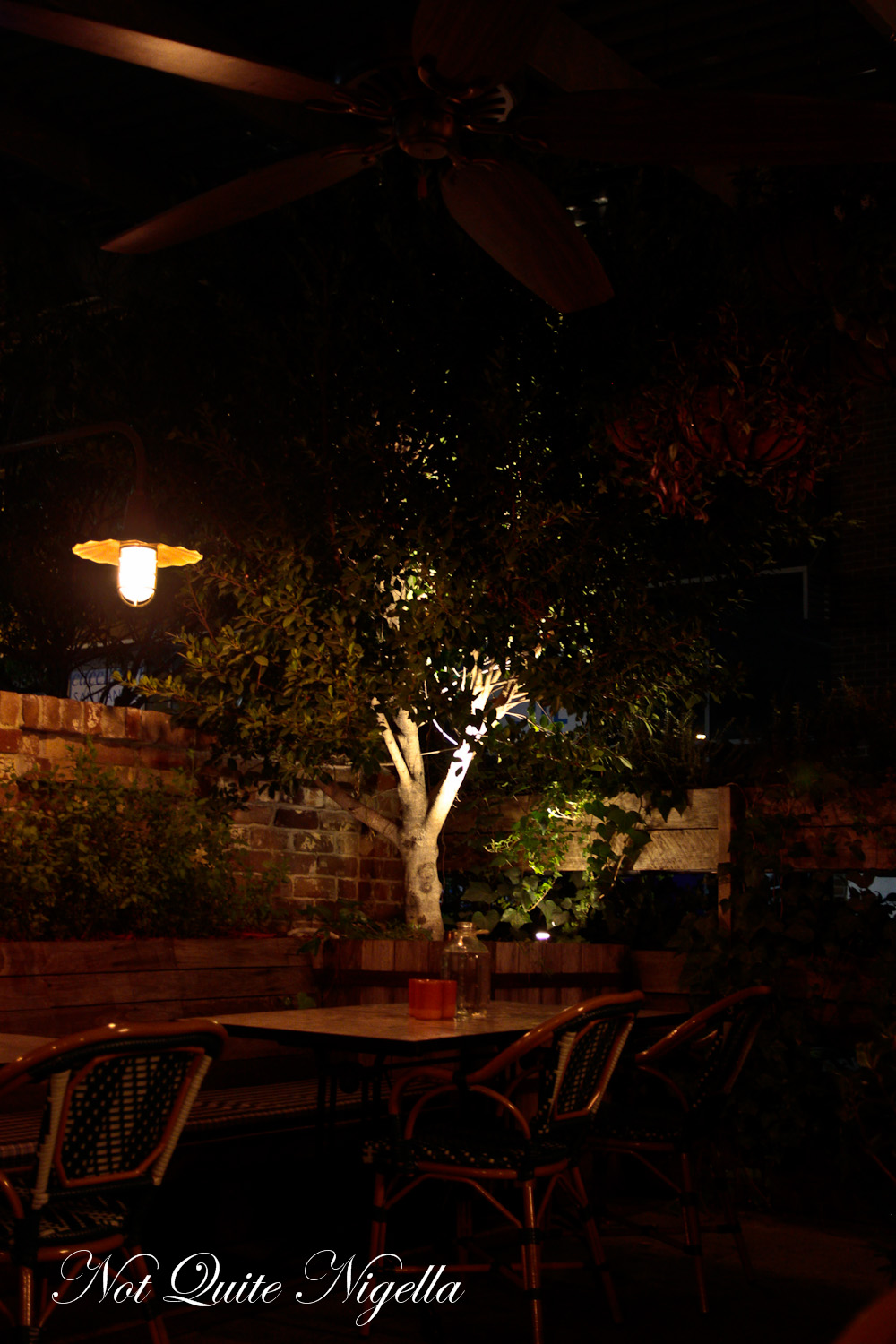 No visit to The Grounds is complete without a shoutout to their famous pig Kevin Bacon who was kidnapped in October 2013. We are told that Kevin knows his name and comes when called. The "farm" is locked up late at night with security cameras but we can't help but take a peek through the windows.

"Kevin! Kevin!" Nick calls and then excitedly points out a black furry creature. "I'm not sure, he's not coming when you call him," I say to peering in and seeing a tuft of black fur breathing but unexcited. "It's a goat!" Belinda cries looking at it from another angle.

Oh well, perhaps it will be another day for a Kevin Bacon sighting...

So tell me Dear Reader, do you tend to avoid going out on public holidays and Monday nights because it's hard to find somewhere open? And do you usually have tea or coffee with dessert after dinner?