Choose Your Own Adventure At Crumble Top, Newtown 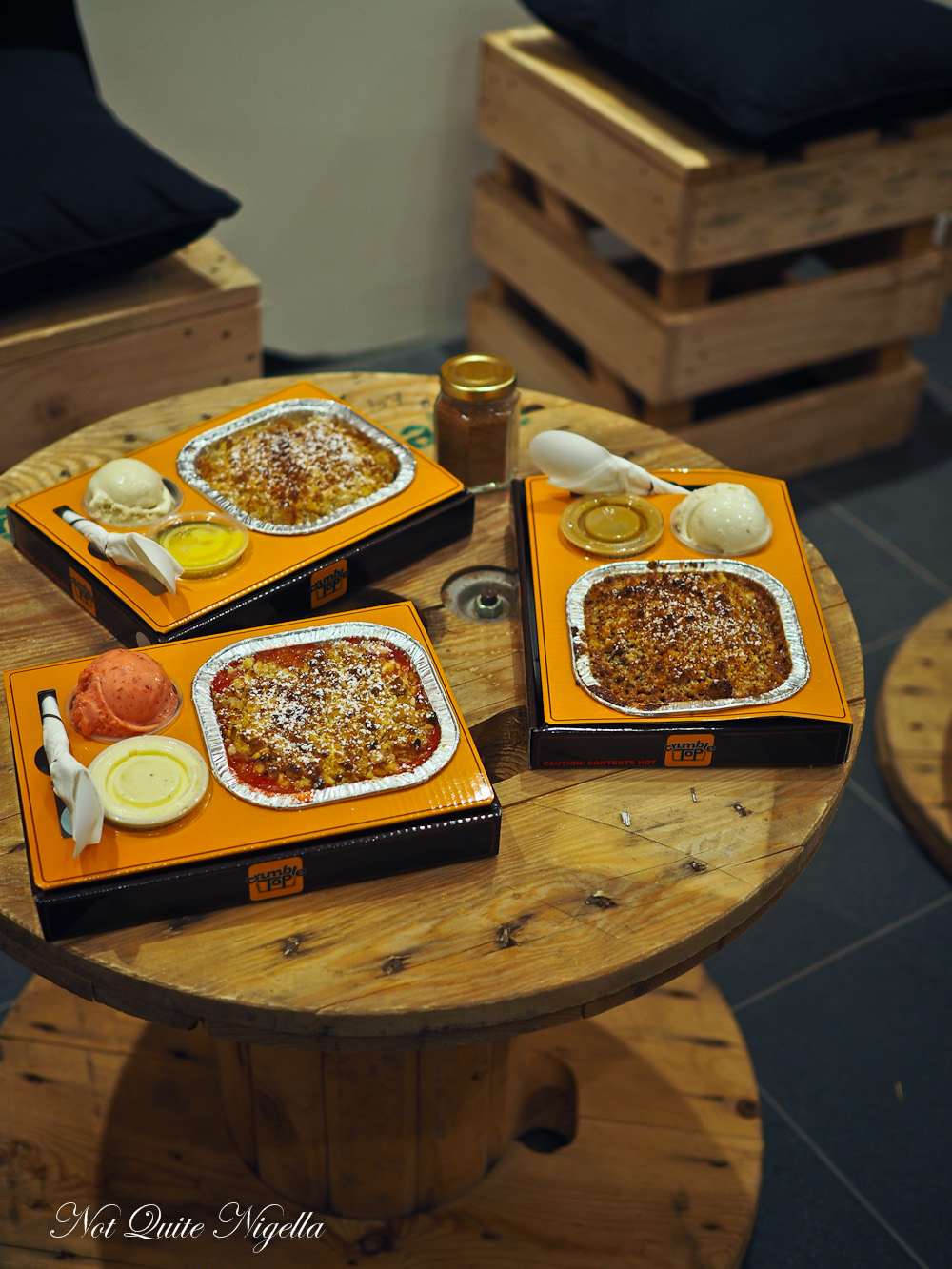 Well we've got two months to go of Winter and what better to do than make the most of the best winter food on offer? And there isn't a dessert much more Winter friendly than a fruit and pudding crumble. But what if you could get your crumble customised using a range of nine filling and nine crumble toppings? And that's not even counting the sauces and ice creams that come with it.

The chef at Crumble Top knows a thing about fine dining or two. Luke Stack is an Australian chef who has worked in some of the best kitchens all over the world. There have been stints at Claridges in London for Gordon Ramsay, the Burj al Arab and Joel Robuchon. 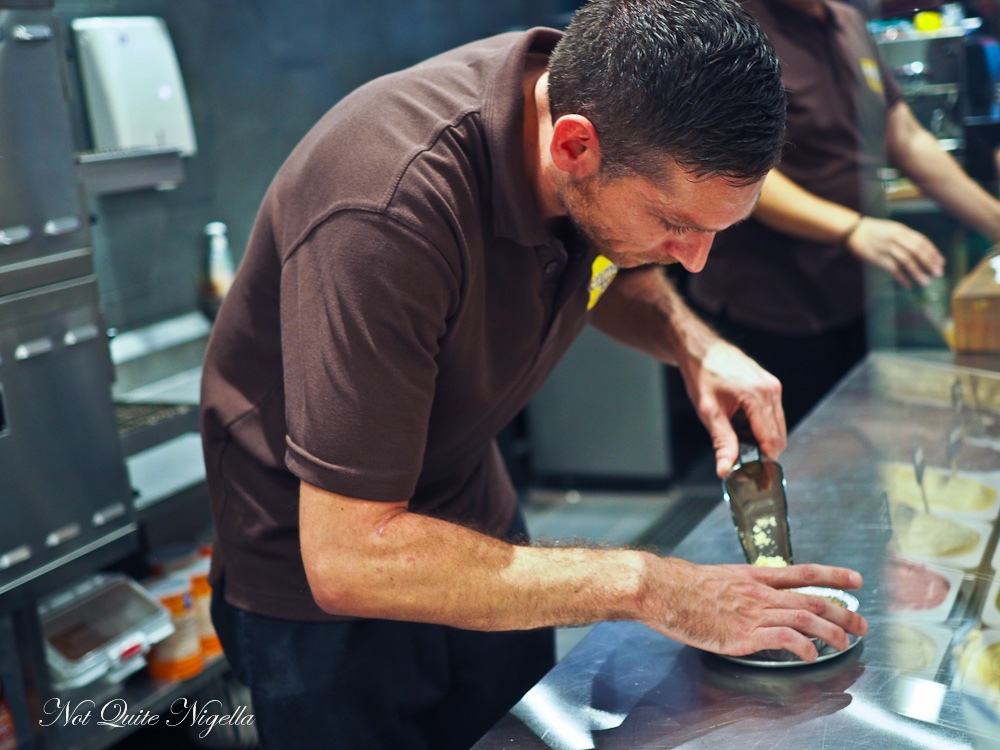 But it was an idea that he had for crumble borne of his time in these kitchens that brought about Crumble Top. Located on Newtown's King Street just near Missenden Road, customers literally stand at the ordering counter, eyes wide contemplating all of the possibilities. Because you can customise your very own crumble from the fruit or pudding to the topping, to the ice cream and the sauce. 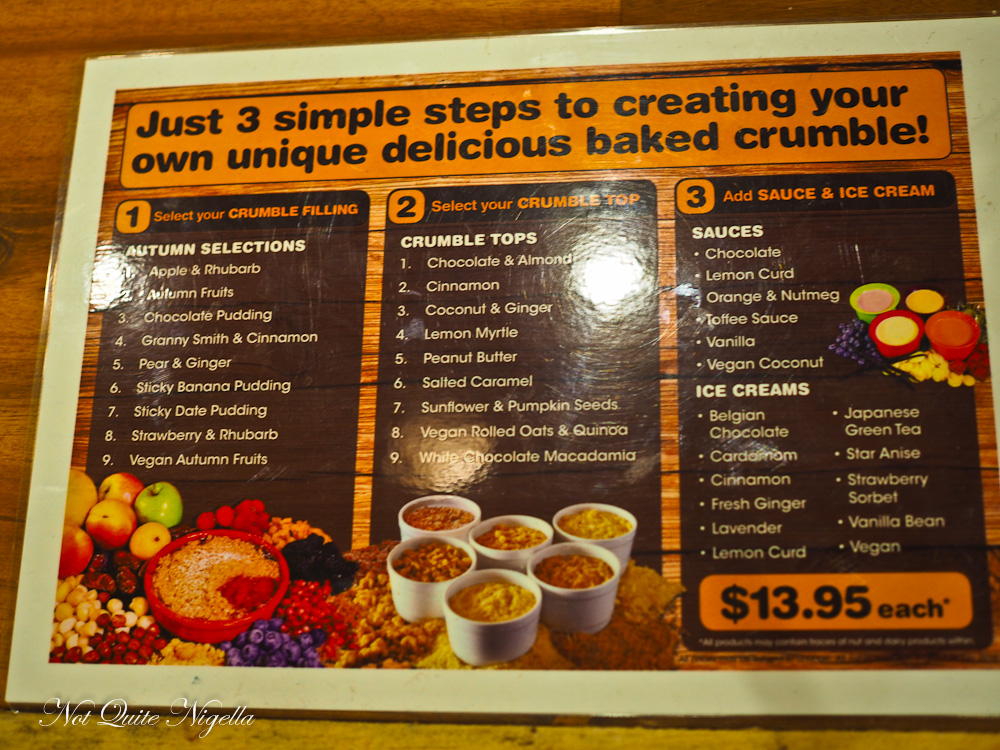 We start planning with the filling or the base. These change with the seasons and there are classics like Granny Smith apple and cinnamon (he only uses organic apples as he finds that the non organic don't cook down enough). There are also other fruit combinations like strawberry & rhubarb, pear & ginger and apple & rhubarb and if you're not so much a fruit fan then you can also have a pudding base be it a sticky date pudding, sticky banana pudding or a chocolate pudding. There's also a vegan fruit base too. 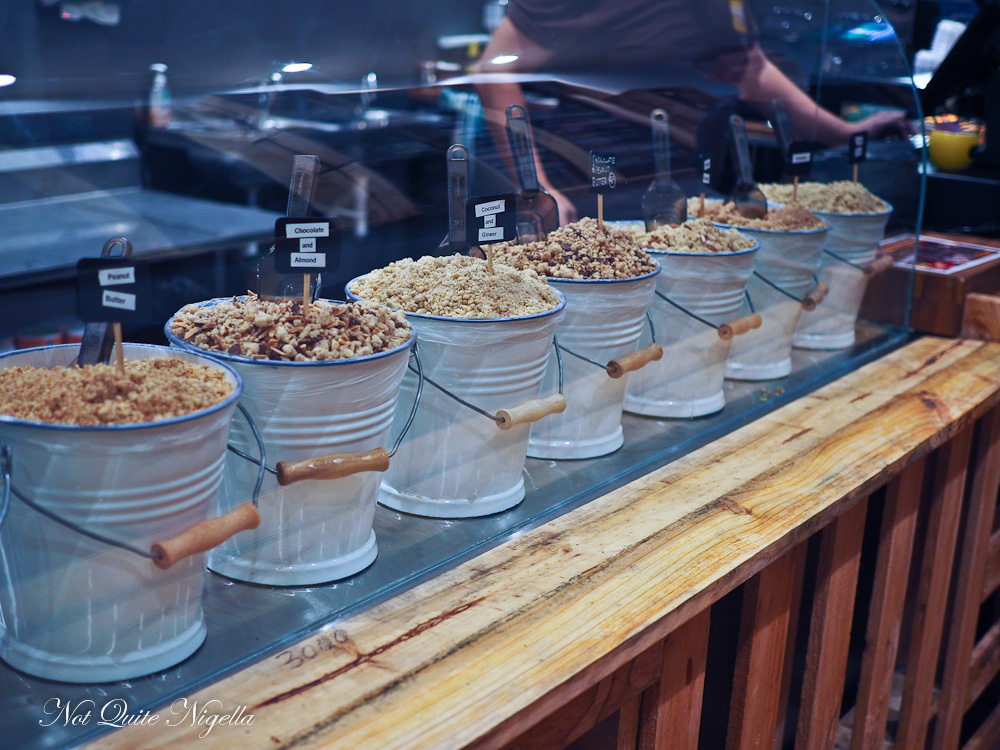 Then you can choose the crumble topping which I have to admit is my favourite part. And these are served scooped out of huge metal pails. I'm tempted to ask, "How much for a pail of crumble topping?" and I suspect I'm not the only topping lover as they tell us that people have bought the toppings to snack on by themselves. I have to say that having nine toppings when you're a topping freak just makes it more difficult and if you happen to be stricken with choice they will just make up a popular one for you. The crumble toppings range from salted caramel, chocolate almond, cinnamon, coconut ginger, lemon myrtle, sunflower and pumpkin seed, vegan rolled oats & quinoa and my favourite the white chocolate macadamia which goes so well with any fruit base.

There are only two more choices after that: a sauce and an ice cream. The sauces are chocolate, lemon curd, orange & nutmeg, toffee, vanilla and vegan coconut. Then choose one of the 11 ice creams. The ice creams come in spice infused flavours perfect to go with a crumble from star anise, cardamom and fresh ginger. Lavender is another flavour that is particularly good and quite unusual. The price for each crumble that is served in a takeaway box is $13.95 so it's on the higher end of desserts when you compare it to gelato but probably on bar with other dessert bars for a similar sized offering. I think the price is the only thing that could possibly hold it back. 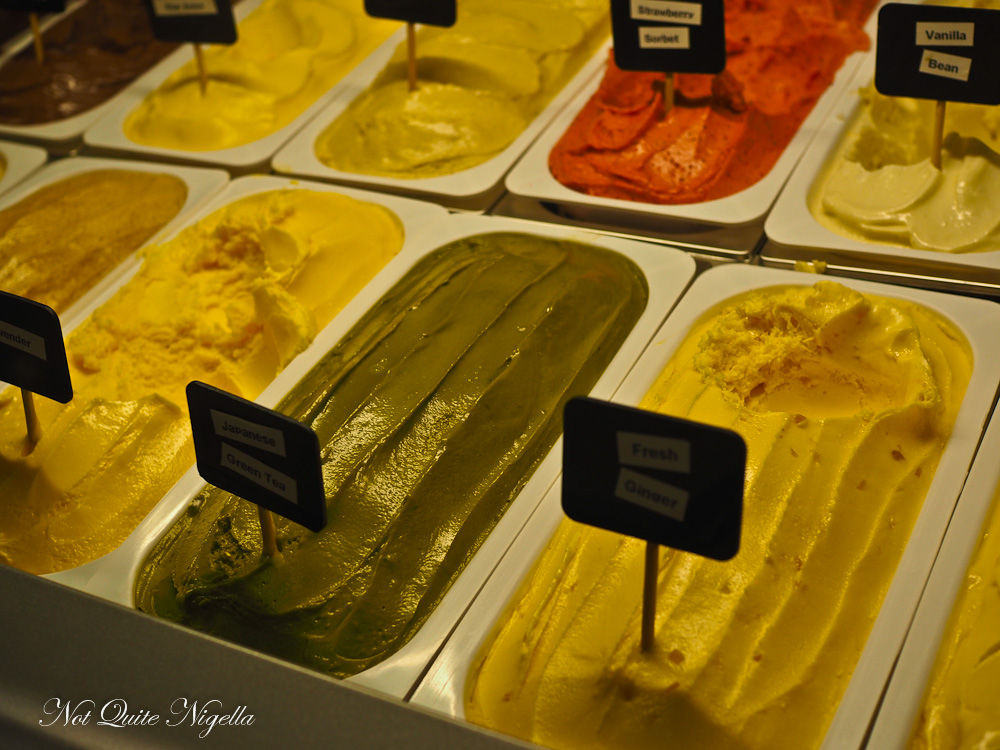 Everything but the gelato is made in house and the menu will change seasonally. Each crumble takes a few minutes to make as once it has the topping put on it is then baked in the oven so that it is served warm and then dusted with icing sugar. 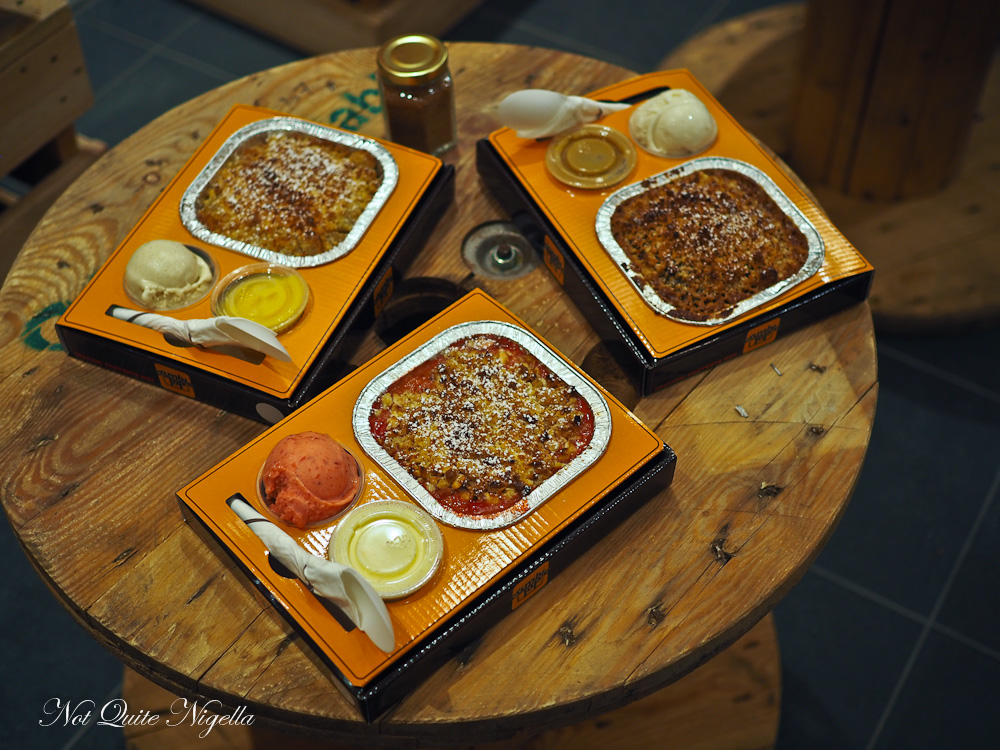 There's a small eat in section where people can pull up a table and a stool or if you can't finish it, you can pack up your box to go. We try three combinations: the strawberry and rhubarb with the white chocolate and macadamia topping and strawberry sorbet-this is JY's favourite (and it was a sneaky late Friday night visit after a full meal out). My favourites were the sticky date with the peanut butter topping and toffee sauce and vanilla ice cream. And Mr NQN's was the pear and ginger with lemon mrytle topping with lemon curd sauce and cardamom ice cream. Like the tale of Goldilocks and the Three Bears you could probably find one to suit you taste and to be "juuust right." 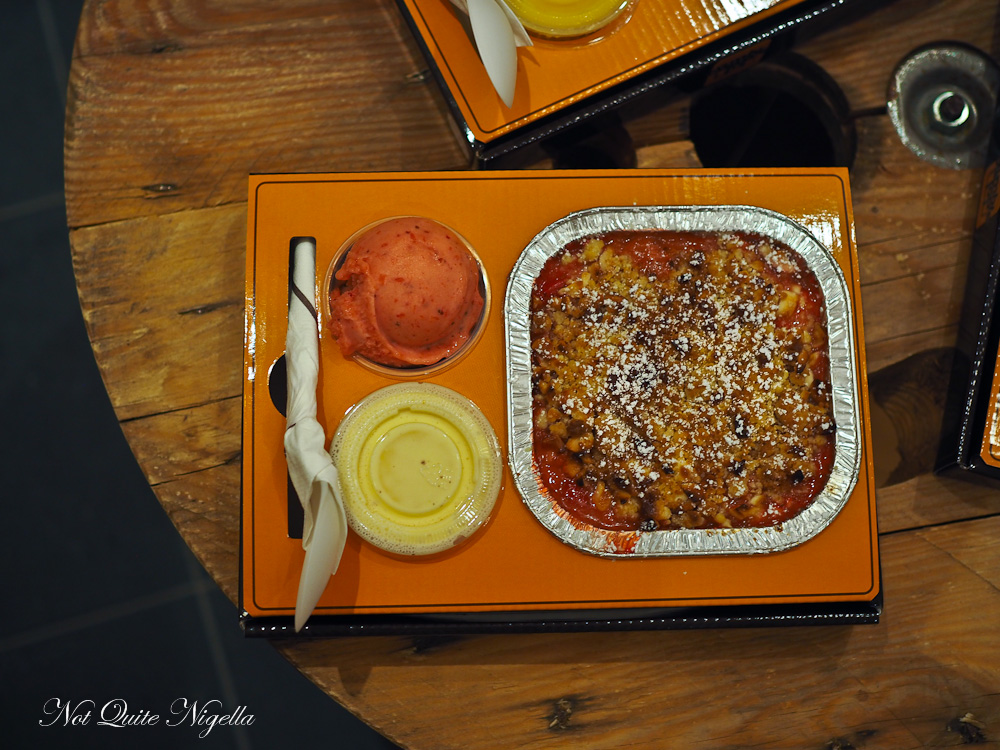 So tell me Dear Reader, do you like choosing components to make up your own? Or do you get paralysed by choice? And are you more a filling or a topping person?

The food in this post was independently paid for.