The Theory of Masala at Masala Theory, Surry Hills 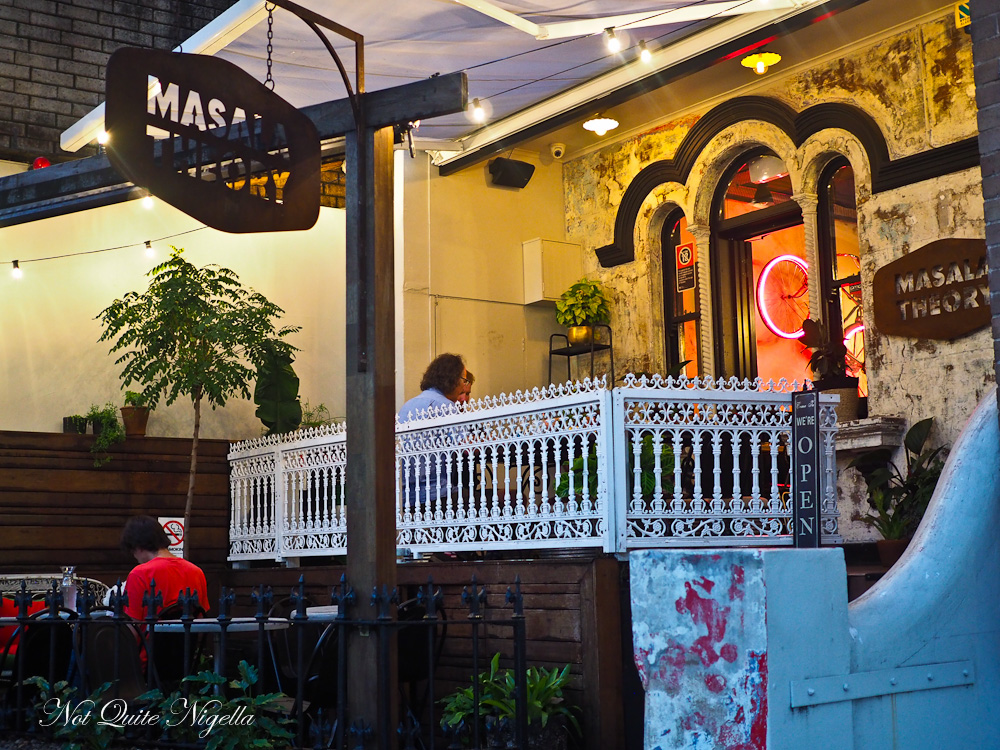 It's a Friday night and the weather has put a damper on our plans. The tremendous evening's outdoor dinner effectively shutdown by thunderstorms. We were driving home along Crown Street when a new place caught our eye. "Masala Theory?". There were no reviews, no indications about what it was like. And no patrons as it was just 5:30pm and then were getting the restaurant ready. "There's an outdoor section for Mochi," observed Mr NQN and plans are made to visit that evening. 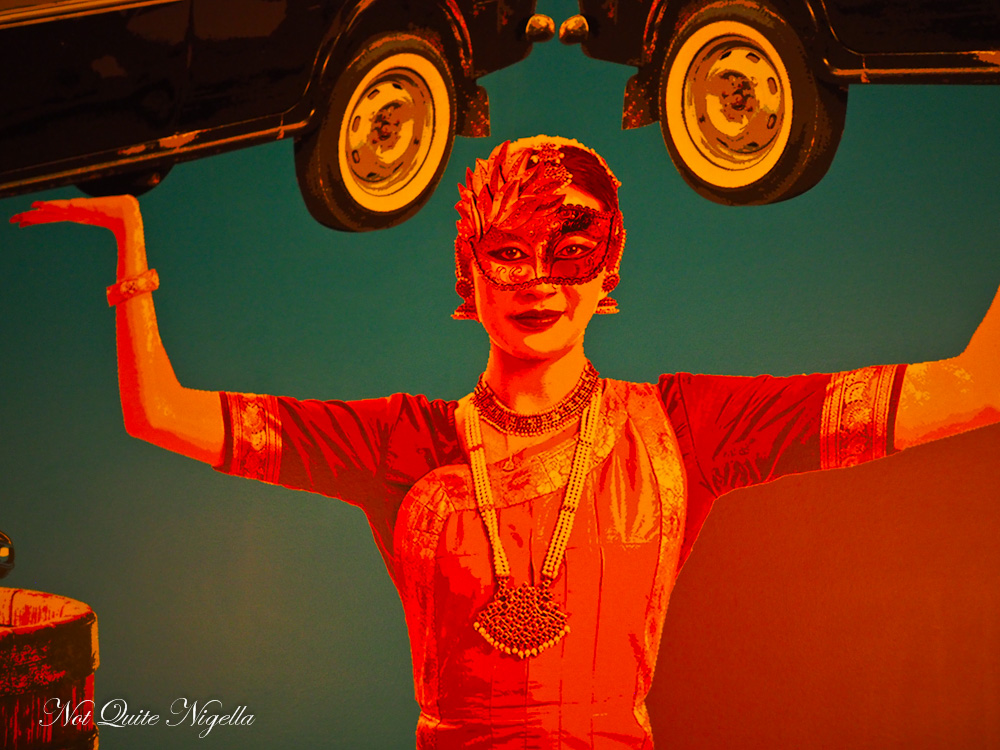 The food at Masala Theory is Indian but with a twist, not fusion as such although there are a couple of dishes that qualify as fusion. But there are also items that you don't often see on Indian menus in Sydney (of course there is Butter Chicken if you need a hit of it). The head chef is Rushabh Rupani. 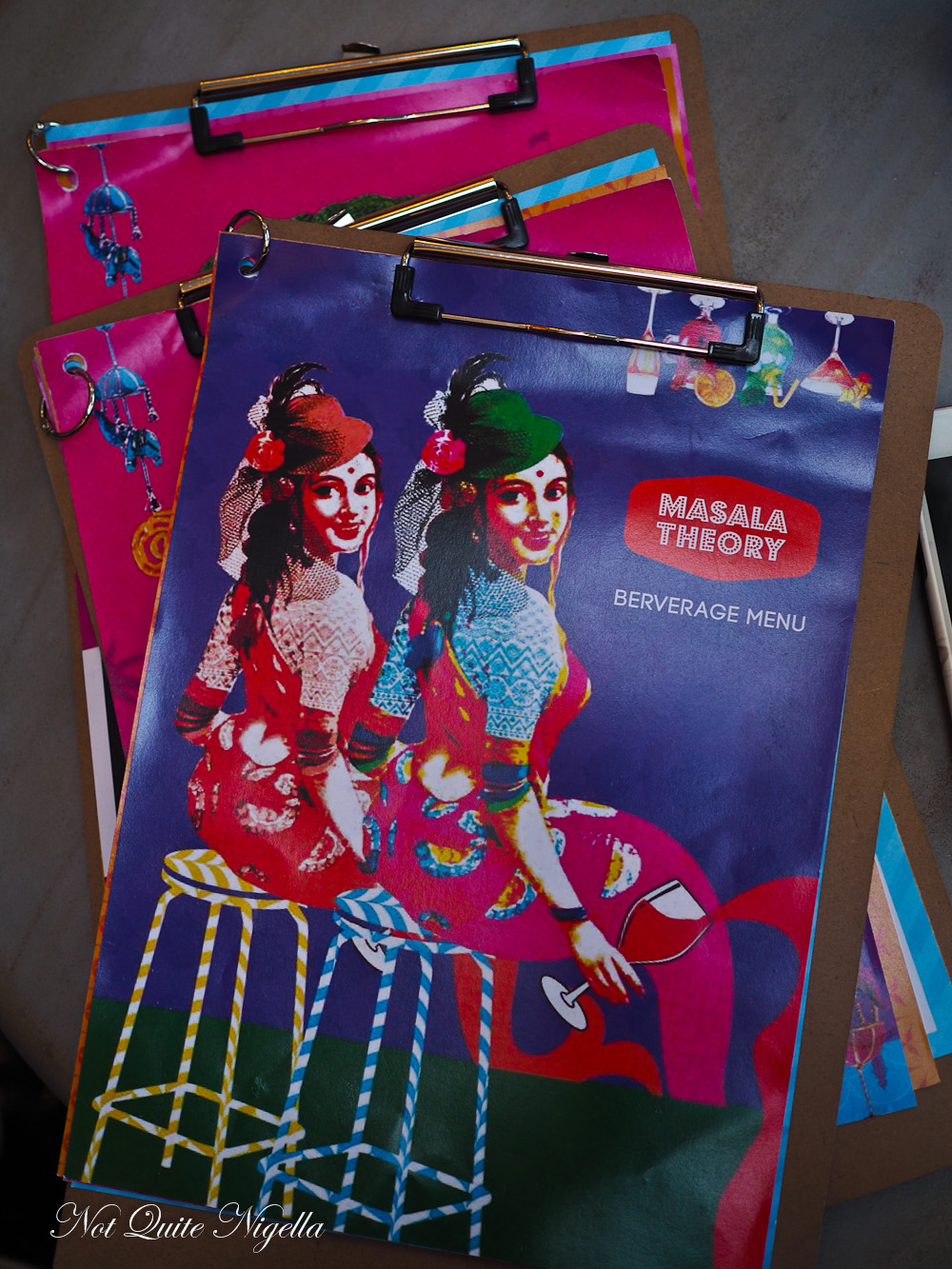 Owner Yashpal Erda introduces himself to us and he is friendly and explains that not only does he have 12 dogs back home in India, he has about as many restaurants. This is his first one in Sydney. He calls it Neo Indian. 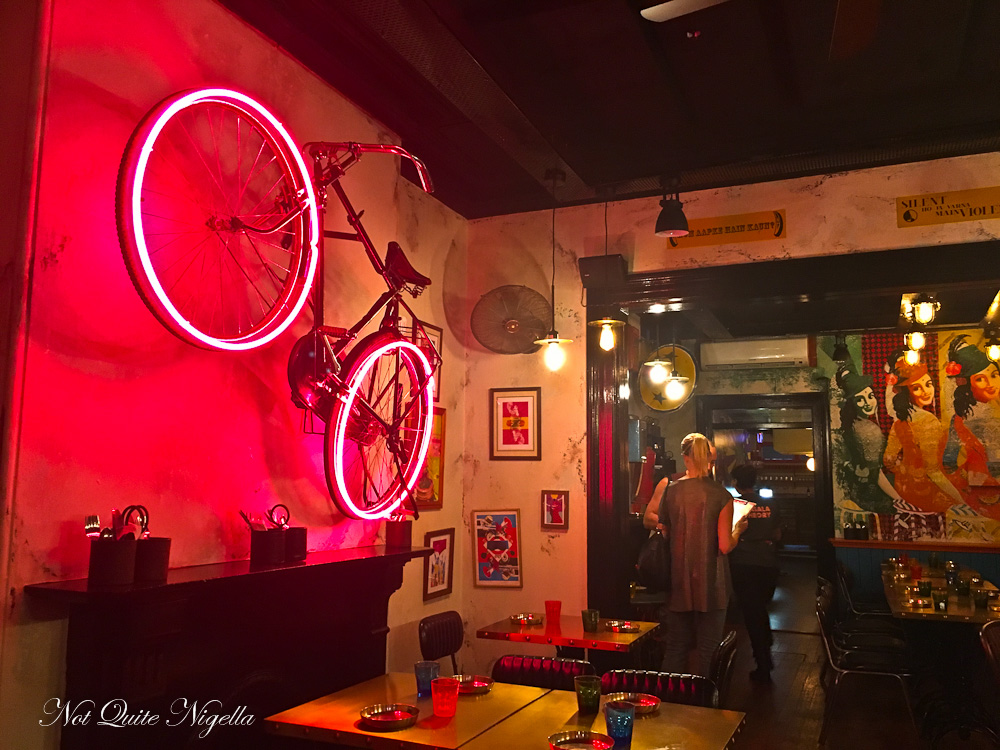 Service is very friendly and eager to accommodate. As it is new they have stationed people outside to talk to passersby. It's an interesting tactic but I don't know if it quite gels with the whole colourful vibe of the place or of Crown Street. 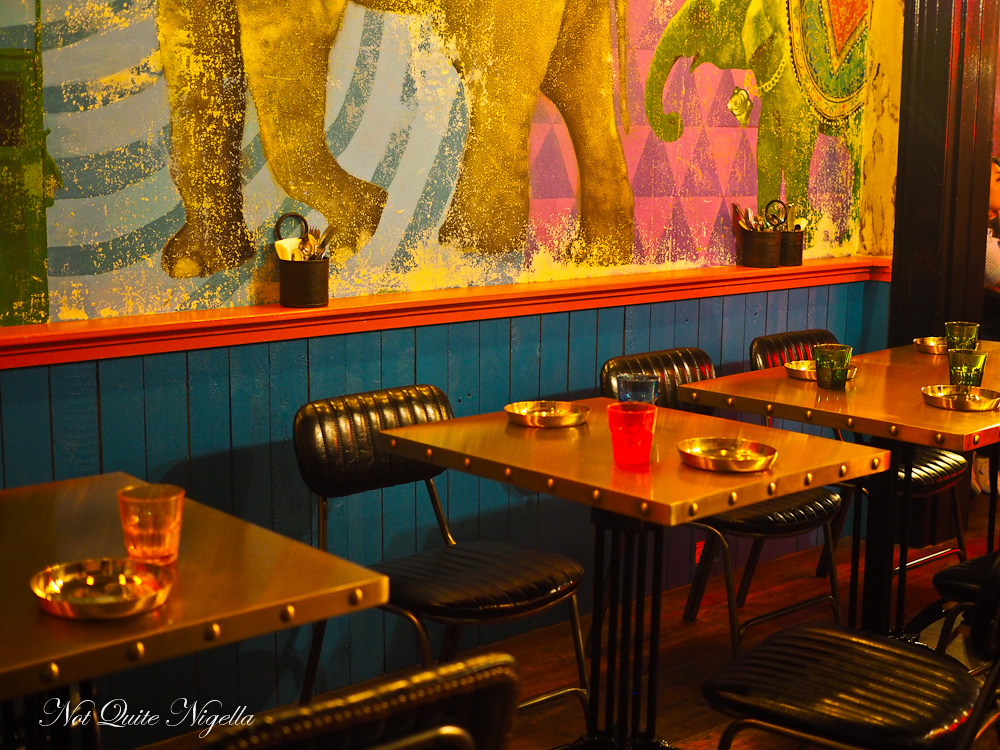 Inside it is replete with colourful wall murals and Indian street signs. And just to add to the hipster Surry Hills vibe there is a bicycle on the wall whose tyres light up neon pink. So the touts don't really work if you know what I mean. Prices are a bit high for a regular weekday outing edging towards more a Friday or Saturday night one. 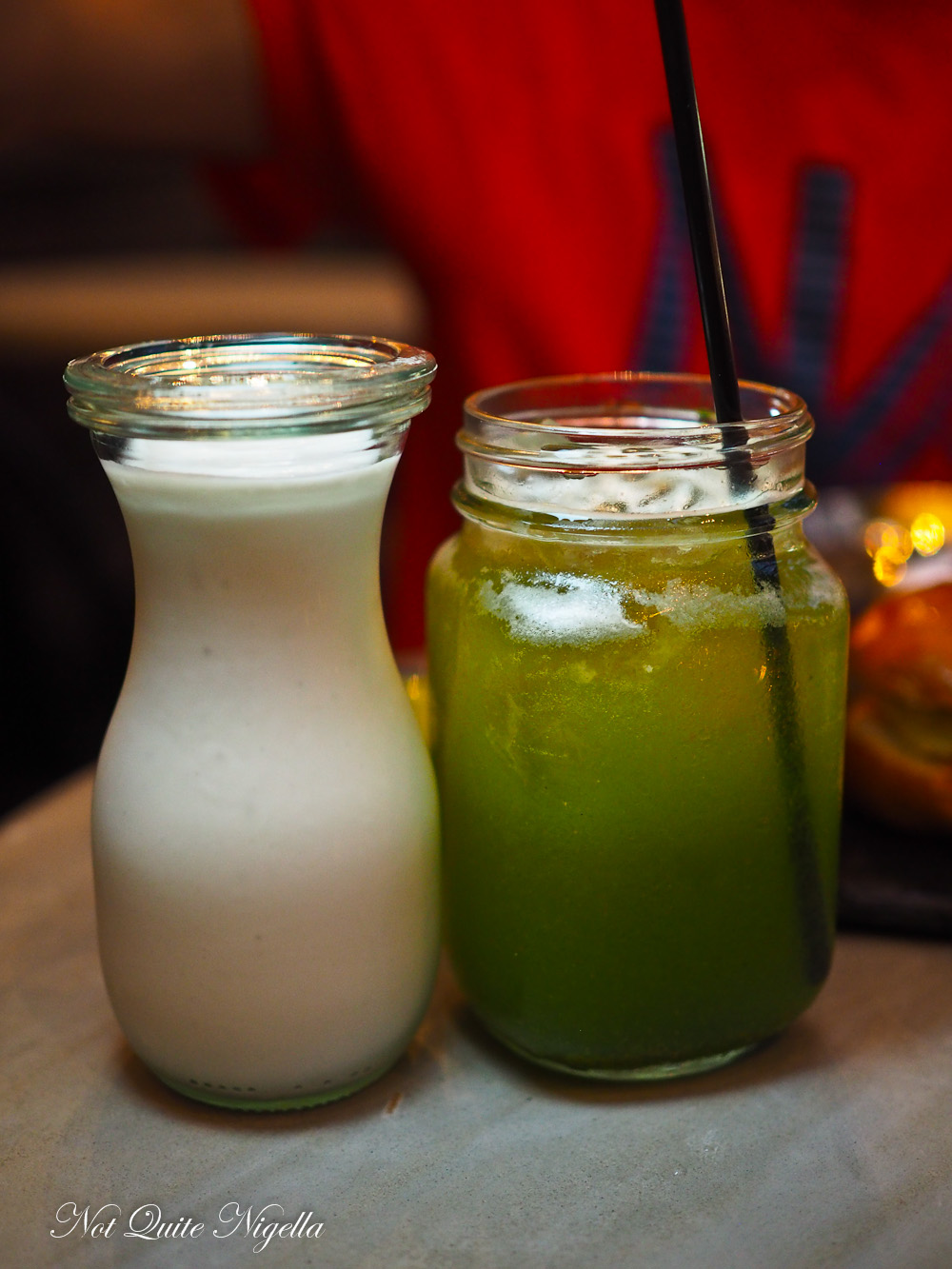 We decided to order a couple of drinks that we hadn't tried before. Like the lavender lassi-which is gorgeous by the way in the same floral vein as a rose lassi. The green mango juice is different from a mango juice. It's a clear green juice with spices added to it with a sweet and salty aspect to it that reminds me of Chinese salted plums. 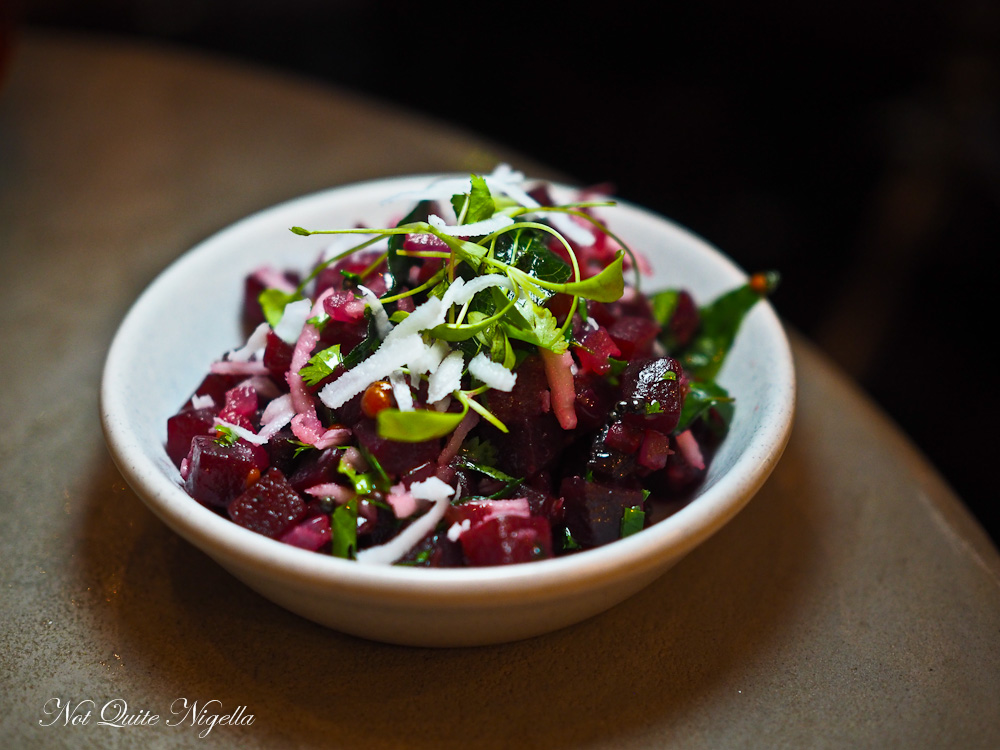 Yashpal actually recommended this dish and having never tried a poriyal we were intrigued enough to try it. He explains that it is something that is usually served before food by itself. It is a warm beetroot salad with black mustard seeds, chillies, toasted lentils, curry leaves and coconut. And this is such a different take on beetroot with a different flavour profile entirely. It is also divine and the black mustard seeds and flash toasted moong lentils give it a wonderfully nutty crunch. 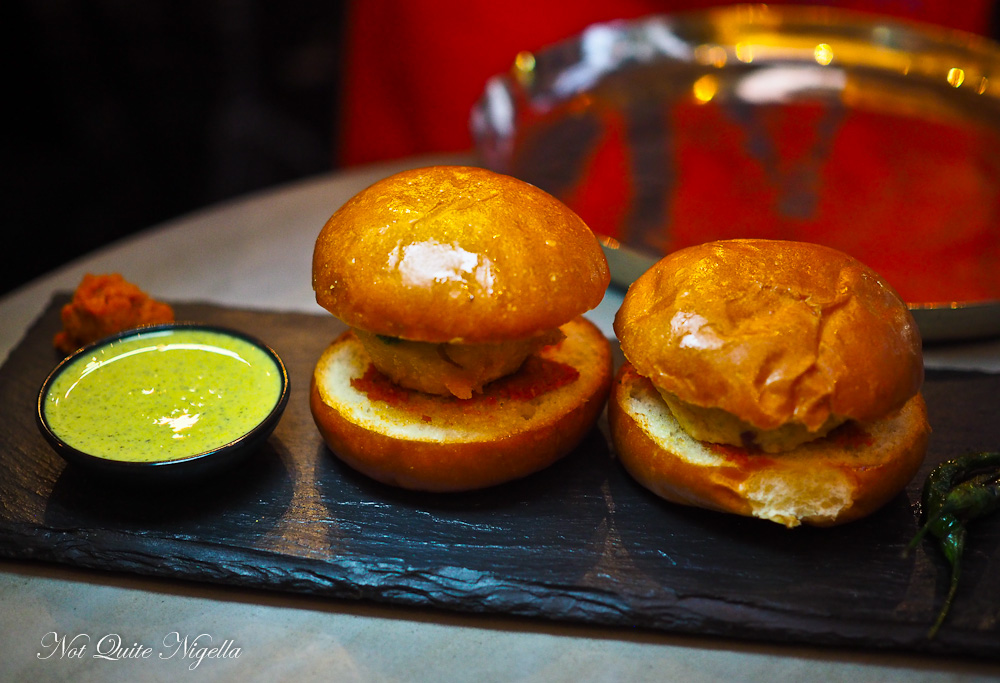 There are two sliders and these to me are the fusion dishes. They are two soft buns filled with a choice of chicken mince with ginger, kaffir lime leaves, mint and garlic chutney or a vegetarian one with a potato dumpling, garlic chilli chutney, mint chutney and chillies. Usually you get two to a serve but we ask if they can do one of each which they are nice enough to do. I actually prefer the vegetarian potato dumpling one for the texture and flavour. Both are fine though but I think that this was more a nod to the Surry Hills neighbourhood and we will end up enjoying the other dishes more. 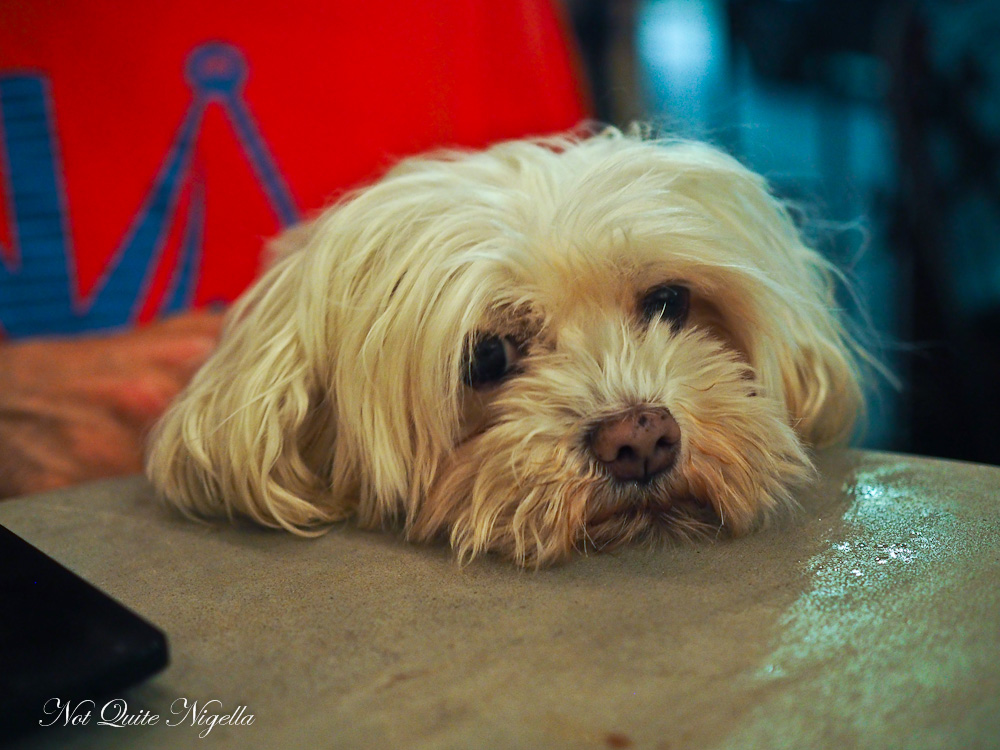 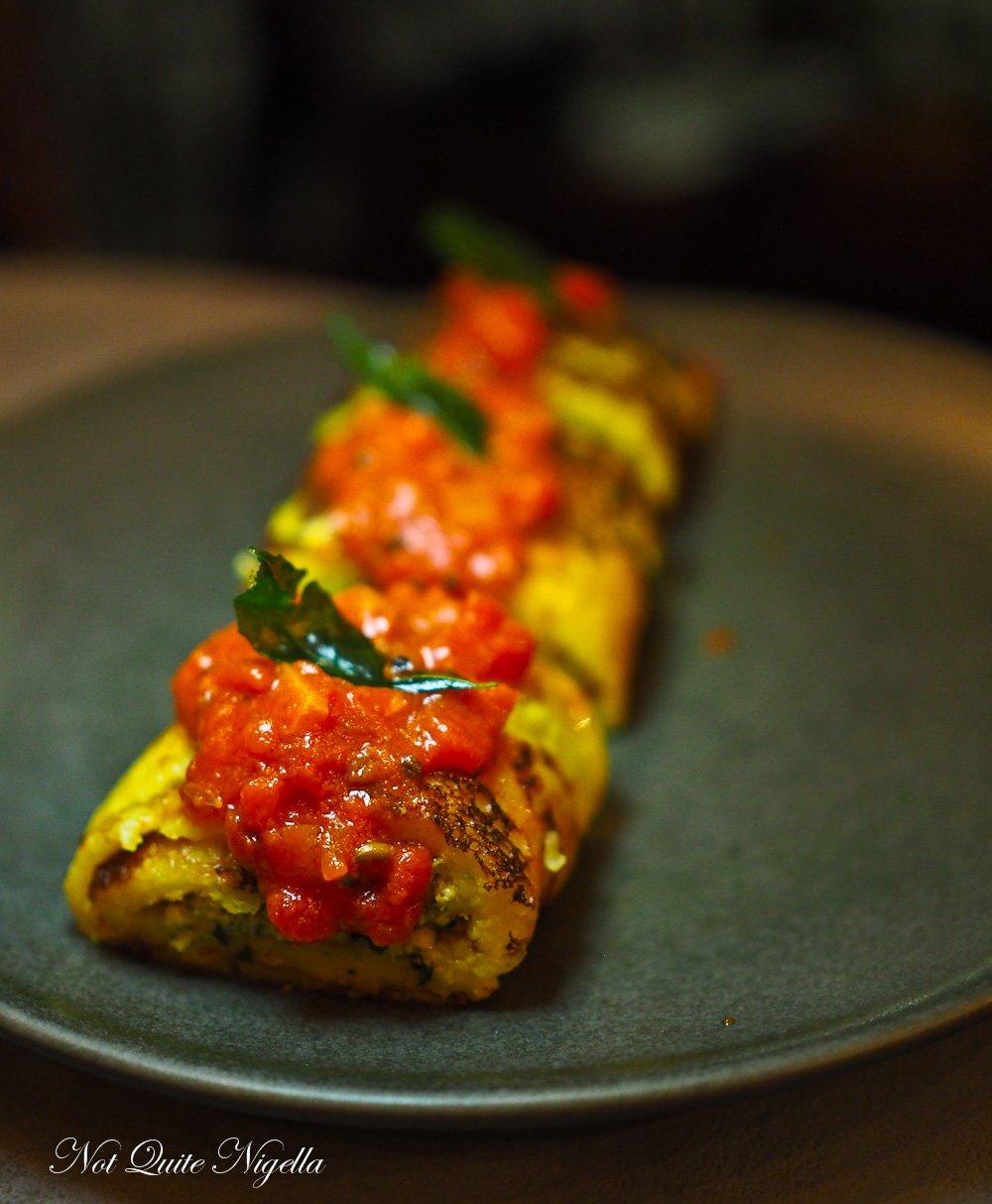 This is a puffy soft split green lentil crepe wrapped around Indian cottage cheese, spinach, onion, raisins, cashews and tomato chutney. It's a tasty vegetarian dish with a bit of sweetness to it. 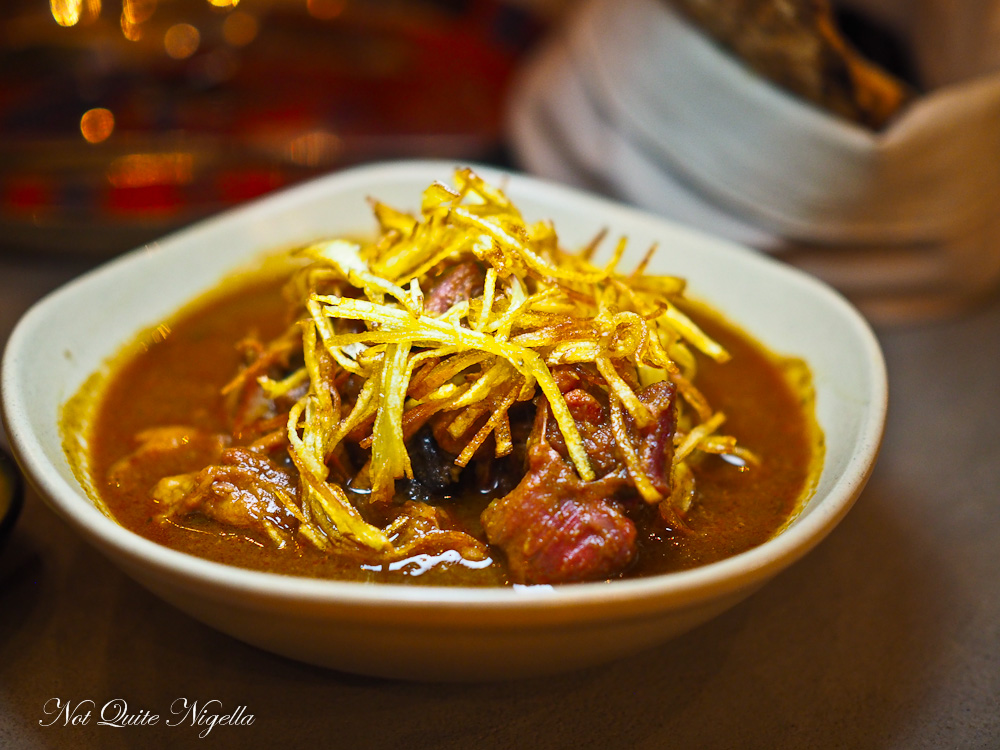 One of my favourite dishes is the goat curry. It's a house specialty with a generous portion of goat meat in a rich sauce made with black cardamom, cinnamon, onion tomato gravy and match stick potatoes. It's got a good hit of spice and I love the tender goat meat-there's some pieces on the bone but there are also plenty of meltingly soft pieces off the bone. And make sure to get some naan or rice to mop up the sauce. 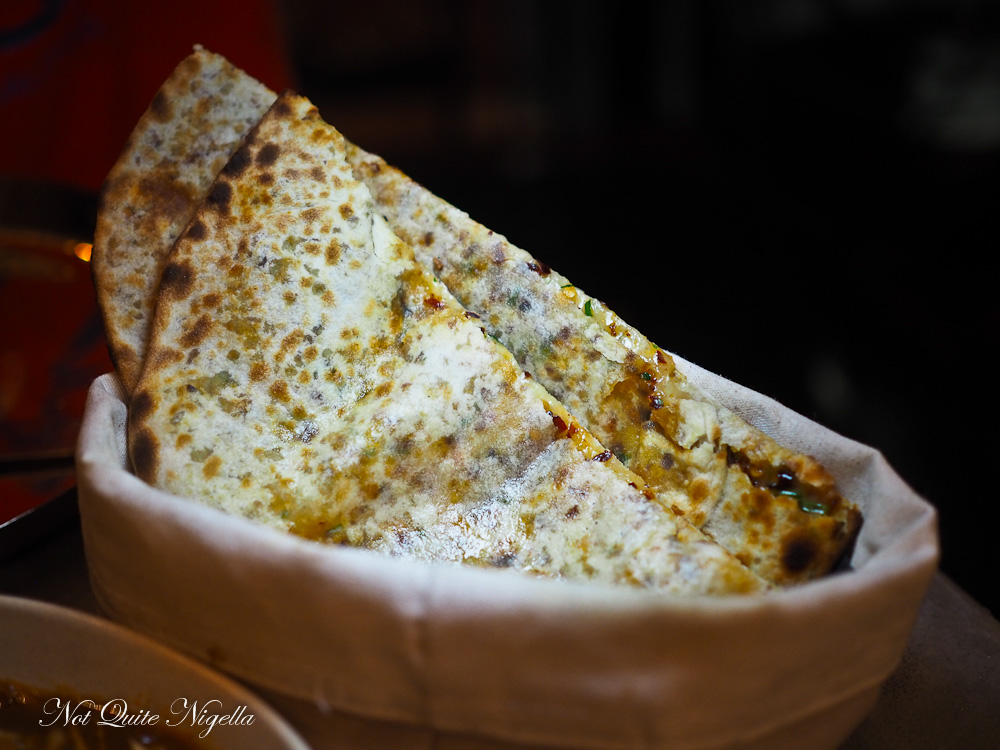 We went for naan over rice because naan is life. The cheese chilli coriander naan comes out piping out with melted cheese oozing from every tear. 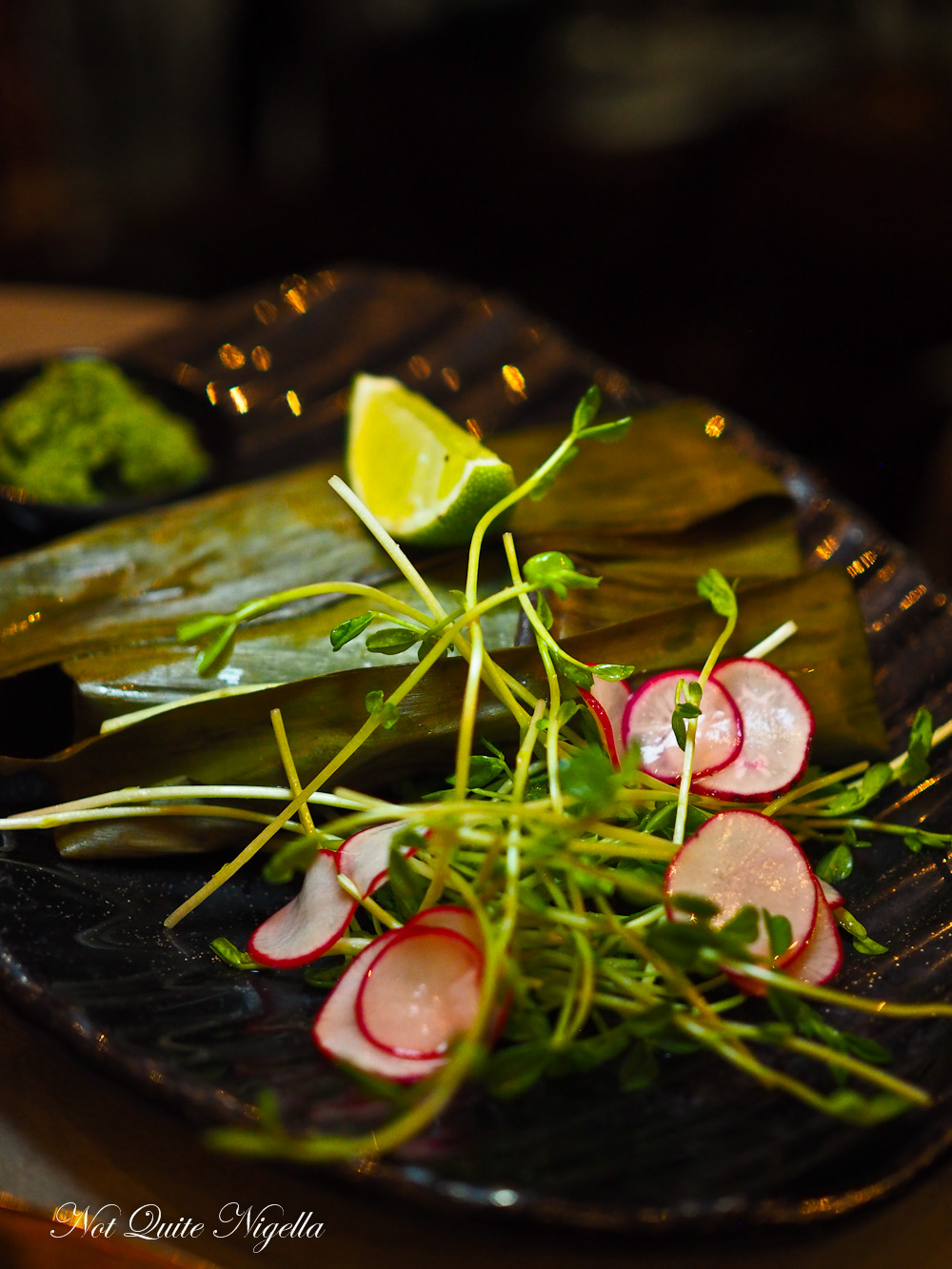 So around 15 years ago when I last visited New York my sister and I were looking for a place to eat on New Year's Eve. It was lightly snowing and we came upon a Parsi restaurant that was empty. We were always told that if a restaurant was empty that wasn't a good sign but faced with no other appealing options we went in as we were curious about Parsi food. What followed was one of the most memorable meals I've ever eaten (and the restaurant filled to capacity two hours later as we were keeping early tourist dining hours). 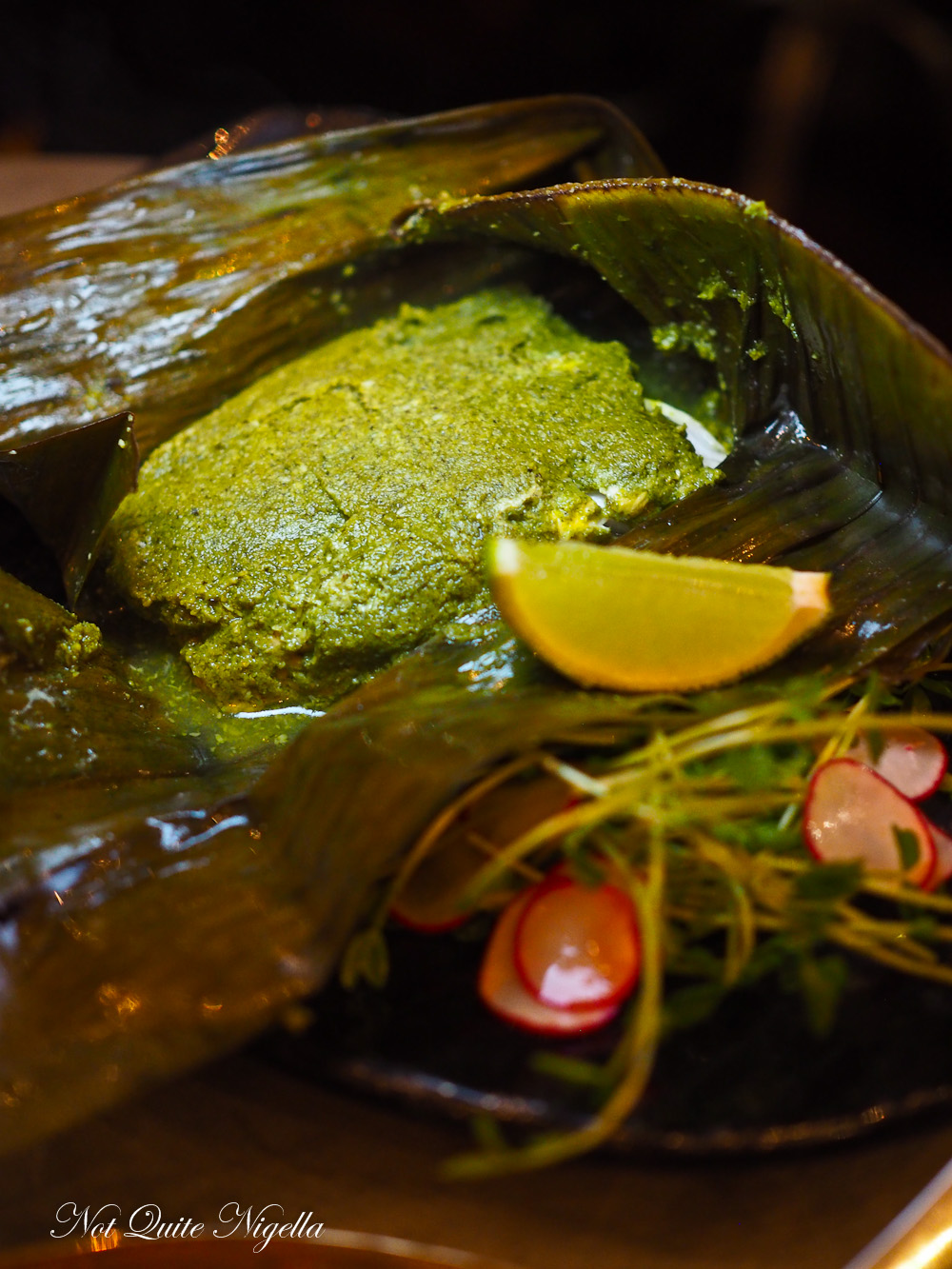 And the main dish I remember is this fish dish called Patra No Machchi. It's a white fish fillet topped with a green coconut mint and coriander chutney wrapped in a banana leaf and steamed. It's a dish that features here because Yashpal is half Parsi. I squeeze some fresh lime juice on it and spooning some of it into my mouth tickles my brain receptors into remembering that meal so many years ago. And it is just as good (although the New York one had a bit more coconut, arrgh why do I remember these things but forget people's names?). 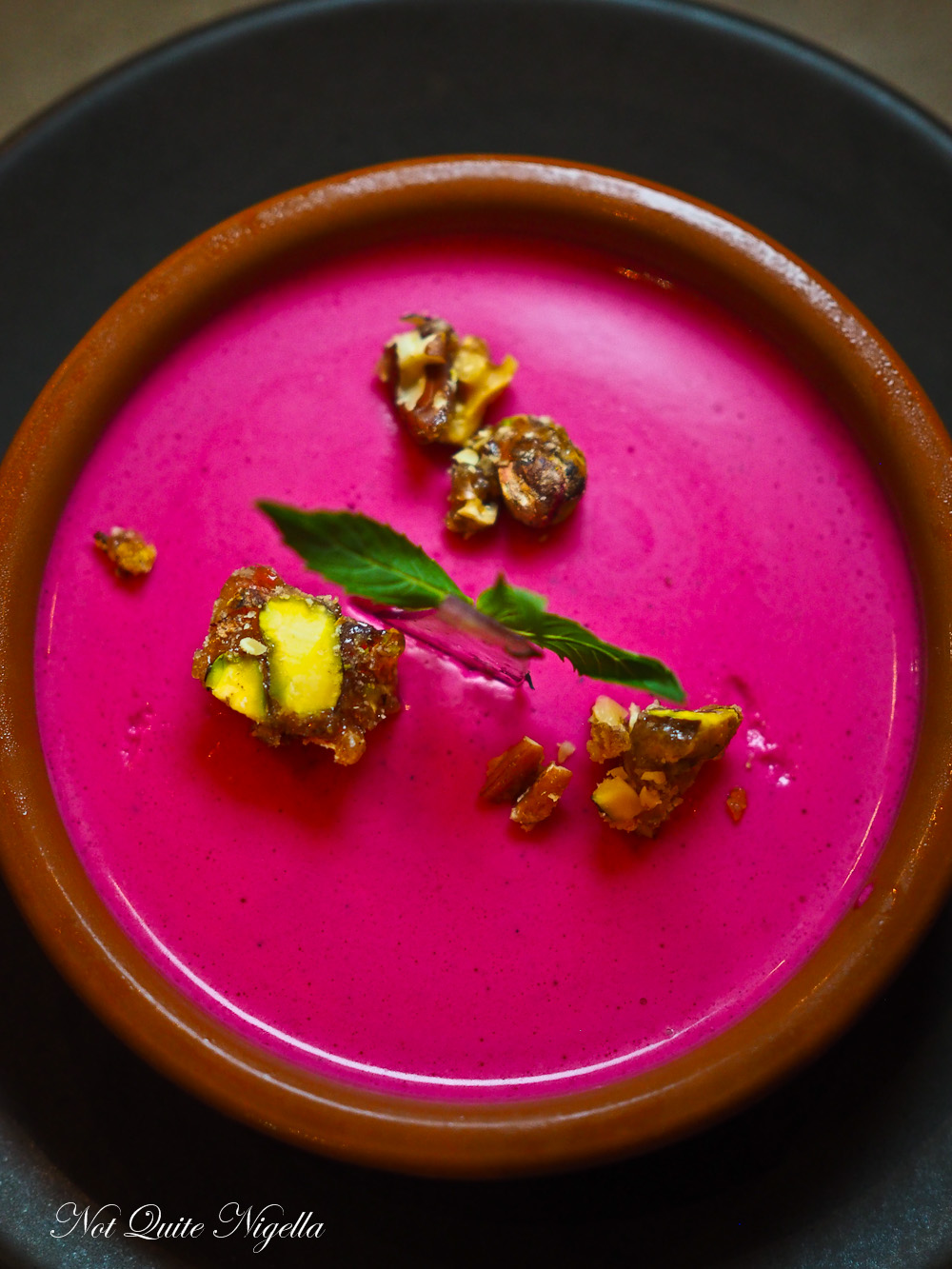 The dessert is a show stopper in vivid technicolour hot pink. The smoked beetroot and buttermilk pannacotta is tangy like a yogurt with candied nut praline and a shard of mint toffee glass. There's the unmistakable flavour of beetroot but it works perfectly with this dessert. It's not overly sweet like many Indian desserts can be, but it's judicious, just enough of everything and just a whole lot of colour.

So tell me Dear Reader, do you have a vivid food memory? Have you ever tried Parsi food and if so what did you think of it? And what do you think of touts outside restaurants?