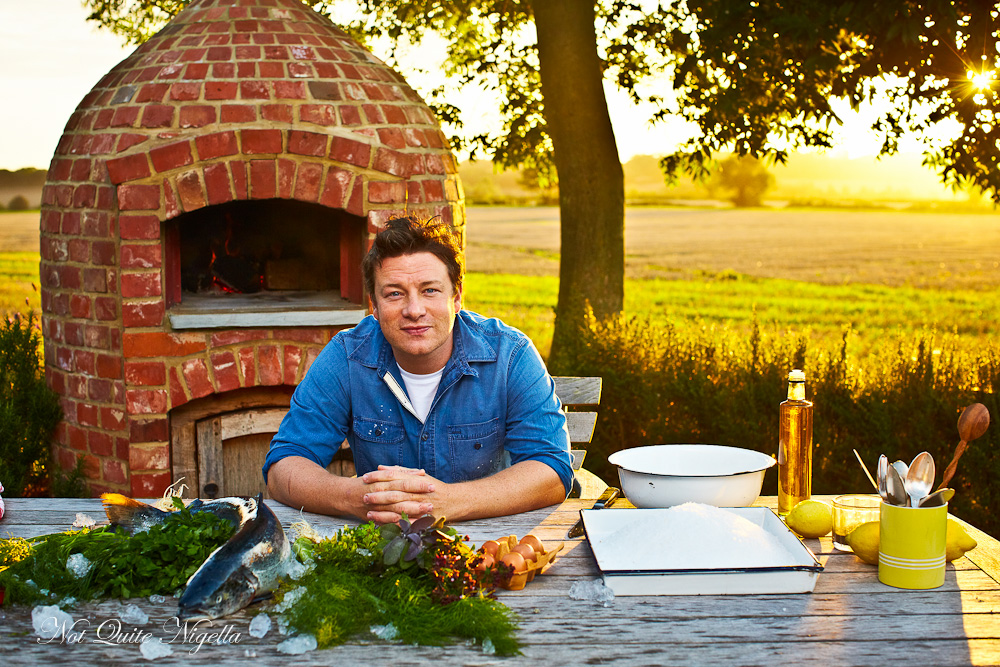 *42 million children around the world are overweight or obese and Jamie Oliver wants to change that starting with his Food Revolution Day. For the fourth year running, this year's Food Revolution Day has one aim: to gain 10-20 million petition signatures worldwide by May 15, 2015. He was in Sydney this week to discuss this idea as well as talk about other issues like family life and cooking naked. *

I can say with absolute certainty that early yesterday morning, the last thing I expected to be hearing at 8am was Jamie Oliver's familiar voice saying, "Don't cooked naked because I burned my c**k once," or how he almost was beaten up by a burly guy in Covent Garden 17 years ago before cheffing became a desirable job. And unless you've been away or in hiding, you'll know that Jamie Oliver has been in Australia.

It's not for a new book or a book tour - this tour is with his Ministry of Food to spread the word of food education. 42 million children around the world under the age of five are overweight or obese and Jamie is campaigning G20 governments to change that very statistic.

The worldwide launch was two days ago in front of the Sydney Opera House triggering approximately 6 week's worth of activity where Jamie encouraged those in the audience of his Food Revolution Show to share and sign a petition asking governments to change laws to create policies around nutrition and introduce compulsory practical food education in the school curriculum. The end date for the petition is May 15, 2015 and he intends to present this at the next G20 summit. "The only thing that affects health in food terms is access and education," he explains. 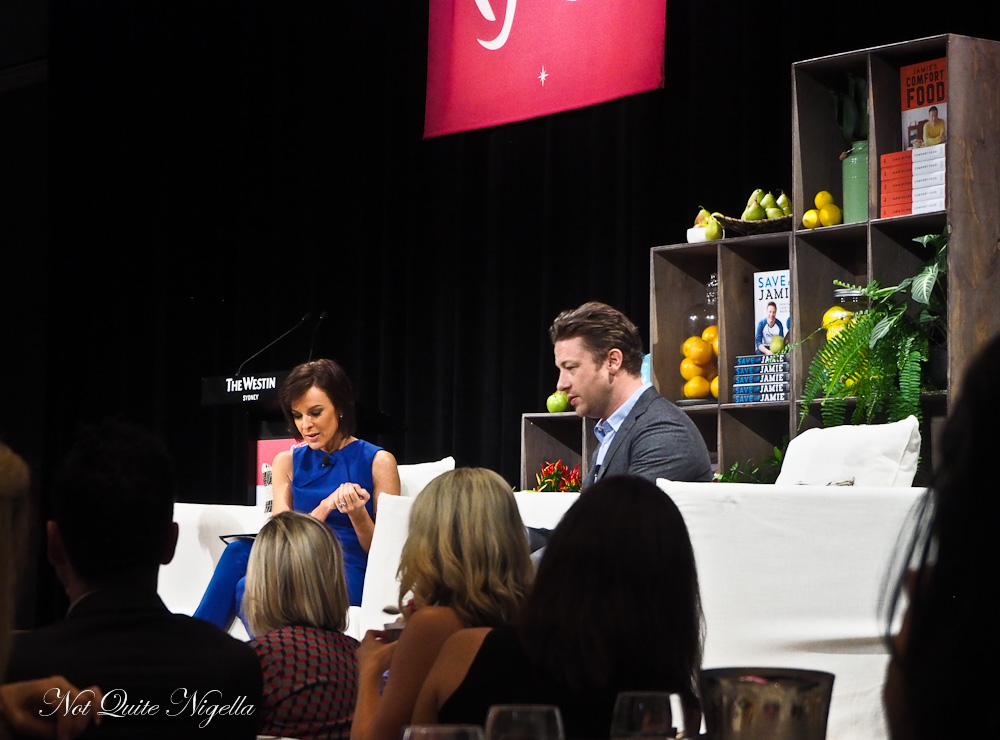 It is during a Business Chicks breakfast emceed by news presenter Natarsha Belling in front a crowd of 800 women and men that he recalls the first time that he felt that food had power. "I was about 9 years old and I lived in a little village in Essex and my dad had grown up in the family business. They owned a pub...I had a bunch of mates in the village - it was quite a Huckleberry Finn country life. My two best mates were cockney and my other two best mates were gypsies and we'd kind of go into the pub and because I started working in the kitchen since eight (years old) we'd get our rucksacks and we'd rattle out these bad ass sandwiches, properly made sandwiches and bits of cake and we'd get drinks together and pack up our rucksacks." The five friends would go off into the woods on their BMX bikes and eat their picnic.

"My two gypsy mates they literally grew up on jam sandwiches and I'll never forget I made a smoked salmon sandwich and my mate went to eat it and I said 'Stop!' and this is the god's honest truth...and I put a bit of lemon juice in it and he ate it and I could just see his face curl up and say 'What the bloody hell!'. He loved it. And that's the moment when I realised that food is powerful," Jamie says.

The idea of the Food Revolution Day came to him via his community and was later amplified with social media. This is the fourth year for Food Revolution Day. The key difference this year is regarding action. "Last year we had our third Food Revolution Day... people came to over 10,000 events physically in 121 countries around the world, the biggest cooking lesson ever in Olympic stadium and most importantly (there were) 1.4 billion impressions on twitter in 24 hours which is bigger than the World Cup," he explains. 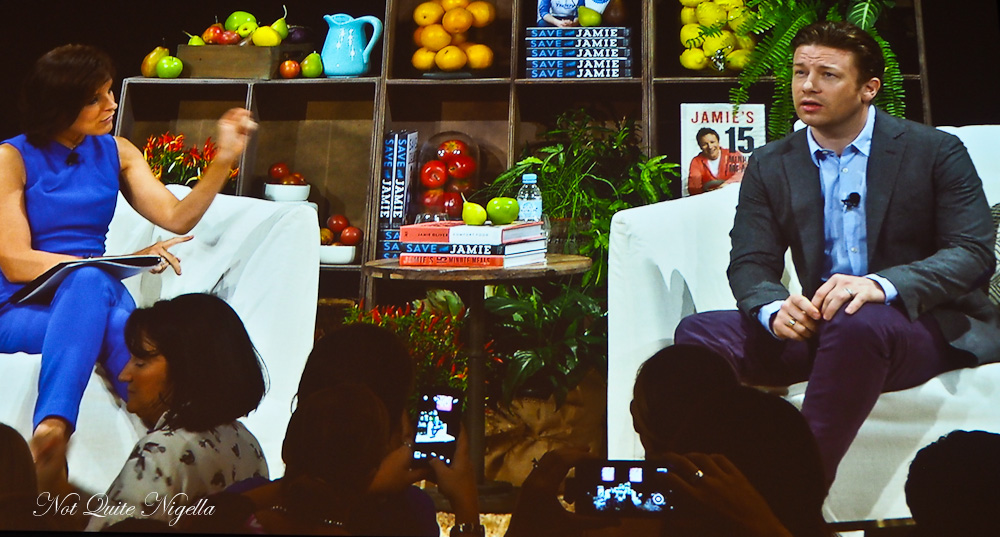 But he adds, "This year it's about a petition. Don't get me wrong last year was amazing, we were patting each other on the back and dusting ourselves off with 1.4 billion but I didn't harness them, I didn't track them and turn it into something tangible that would frighten the life out of government to do their bloody job so this year is only about one thing: whatever action we do whether it's left or right...anything we do goes to that petition." And during the breakfast, just 26 hours since the start, there are almost 150,000 signatures.

And what exactly does filling in your name and contact details and signing the petition do? He explains using an example from ten years ago with his "Jamie's School Dinners" campaign. "In England...we had standards for dog food but not kid's food. And they were feeding filthy sh*t to our beautiful kids 190 days a year from 4-18 (years old), breakfast and lunch. It was only 370,000 odd signatures but it got half a billion pounds out of the British government to create a law that protected them."

"It's our job as parents of a country or a community to take control and revamp. A kind of metaphor for that (role) is government. A government's job is to act like a parent and look after a state". He laments the short terms that governments have to effect change. "The business model is sh*t because they change every four years and we all know...that short term vision and short term profit is always, always a compromise to the bigger picture." 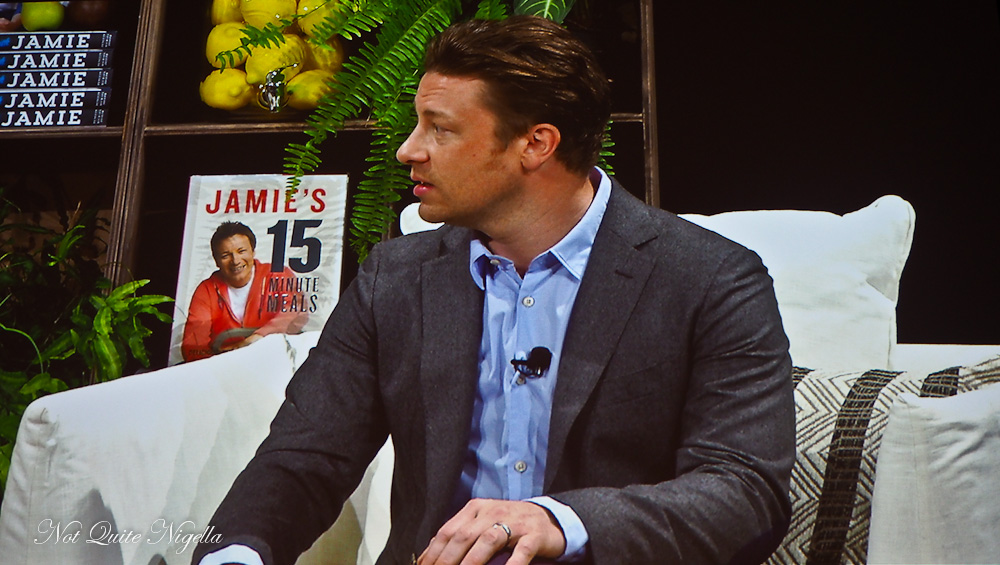 "The truth is that the poorest and most hard to reach communities that possibly act and behave the worst are not represented and those kids are really, really, really vulnerable. But it's got so bad now that it's even rich middle class kids."

He continues, "The problem with diet related disease is that there's no shoot-out, there's no helicopter chase, it's not glamorous, it's a slow eroding soul-destroying slug-like fripping annoying disease that slowly kills people. So it's not dramatic, it just kind of gets stats."

He admits that he falls short of perfection himself. "Of course parents can do more, of course there are some sh*t parents out there and there are amazing parents out there. I know that I'm not perfect, I'm constantly thinking about how I could be better and did I approach that situation right? Even I've been in Australia for ten days and I've missed two birthdays. None of us are perfect." 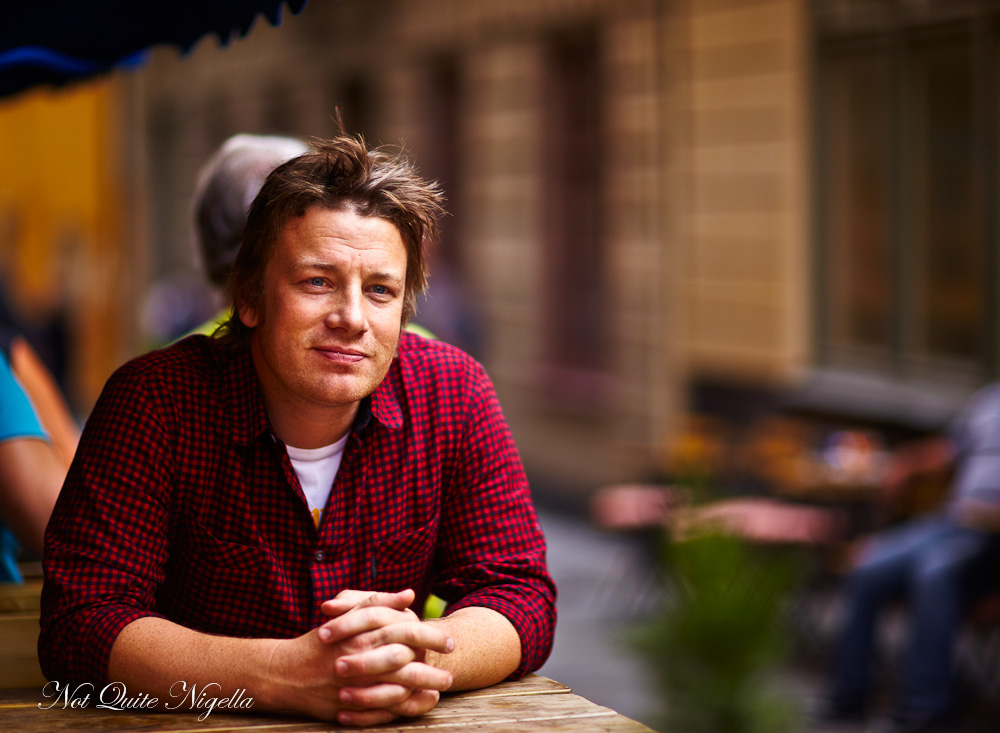 Australia's Stephanie Alexander is one of his heroes but he acknowledges that while her efforts have raised pockets of funding, it is not inclusive of every child so their work isn't done yet. "When you teach kids how to grow and cook they eat from a whole range of things and they're armed with a whole different kind of understanding, not just in food but the environment and the country and everything."

Marketers in large multinationals are singled out in his talk. One of his solutions is taxing an item that he feels will be inevitably taxed: soda. "None of us love tax do we? If we give food education for every child, we can't fund that from current schooling money, it can't be old money because that going to upset all the teachers. It has to be new money, maybe they take (it) from somewhere else."

But he adds, "Go tax soda drinks, just tax them they're a**holes anyway. They're empty calories they're no good, they're kind of fun, they're a treat. And I love a glass of Coke about six times a year up the mountain after skiiing or on a beach but to hydrate on it or have it in the home: problem. These drinks in many parts of the world are more well distributed than clean water." He also says that in corner stores in Britain, Red Bull is sold next to Ribena.

The subject clearly riles him up with the audience who are rapt, "Let's debate it, is it ok for a seven year old to have a can of Red Bull? Eight (years old)? Nine (years old)? Let's get some scientists in and some mums in and dads in and let's decide. Then we tell the government to pull your finger out and do your f**king job and protect our kids." 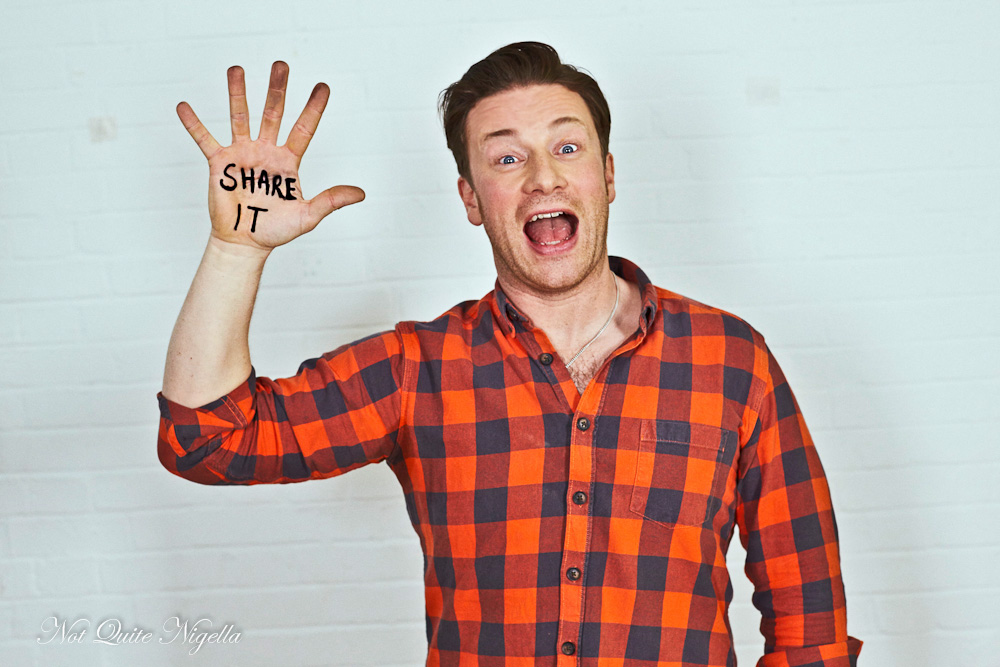 "Soda tax will happen anyway regardless of what I say because why? Because the government is always short of cash and they will find the nearest link for a little extra cash. That's the pattern for the last 30 years. It will happen. My point is you own it, it's your tax. If you don't say you want it (soda tax), you won't have the capacity to say that all of that money is supposed to be spent on education and health, what will happen is that it will just go into the pot and they'll just be stingy again."

For this cause he has also enrolled his celebrity pals to drive home the urgency of the aim: 10-20 million signatures worldwide (2 million in Australia) by May 15, 2015. "I wrote to Ed Sheeren and me and him have wrote an anthem. Paul McCartney has laid down bass and backing vocals last week. Everyone that I've asked has said yes. Paloma Faith has said she's going to be on it, we've got Chris Martin on the keys. We don't want to sell it, we don't want your money, we want you to share it." And by sharing the song, he means sharing the message and getting signatures.

"I'm not being anti anything... I think burgers are great, a can of Coke is great I think there's lots of great stuff out there. There are seven companies in the world that produce much of this stuff and there might be people in this room that work for them and that's alright and that's okay because you can only make change from within whether it's government or companies, there are always good people inside these businesses that are fighting for change." 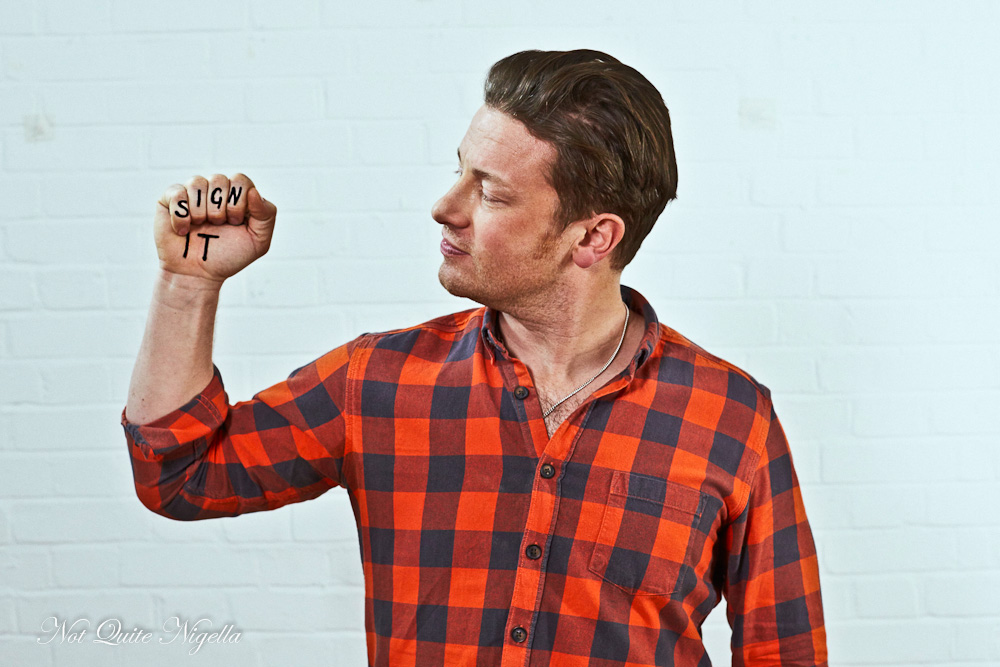 He ends by drawing parallels with his home life. "When I really started ramping it up, Jools (his wife) was like, 'Monday to Friday's yours but the weekends are mine. That's the way it is. Five weeks of holiday a year that's it.' So that's how we roll. I used to work 7 days a week and I was so glad (for the change). We all need rules...games work better with rules and my rules were that. Keeping that time is important. There's no point in working like a bastard...and then your family life falls apart. A good healthy family life needs a man to cook naked." He pauses and then adds smiling, "Or at least think that it's a good idea and learn from his mistakes."

So tell me Dear Reader, how do you feel about what Jamie has to say? Would you sign the petition? Do you think we can change the laws here?

And if you're curious to know about what happened when Jamie cooked naked, take a peek at the video here. I left it as a video rather than transcribing it because I wouldn't have been able to capture how funny his story was!

And another video, this time about Food Revolution Day!