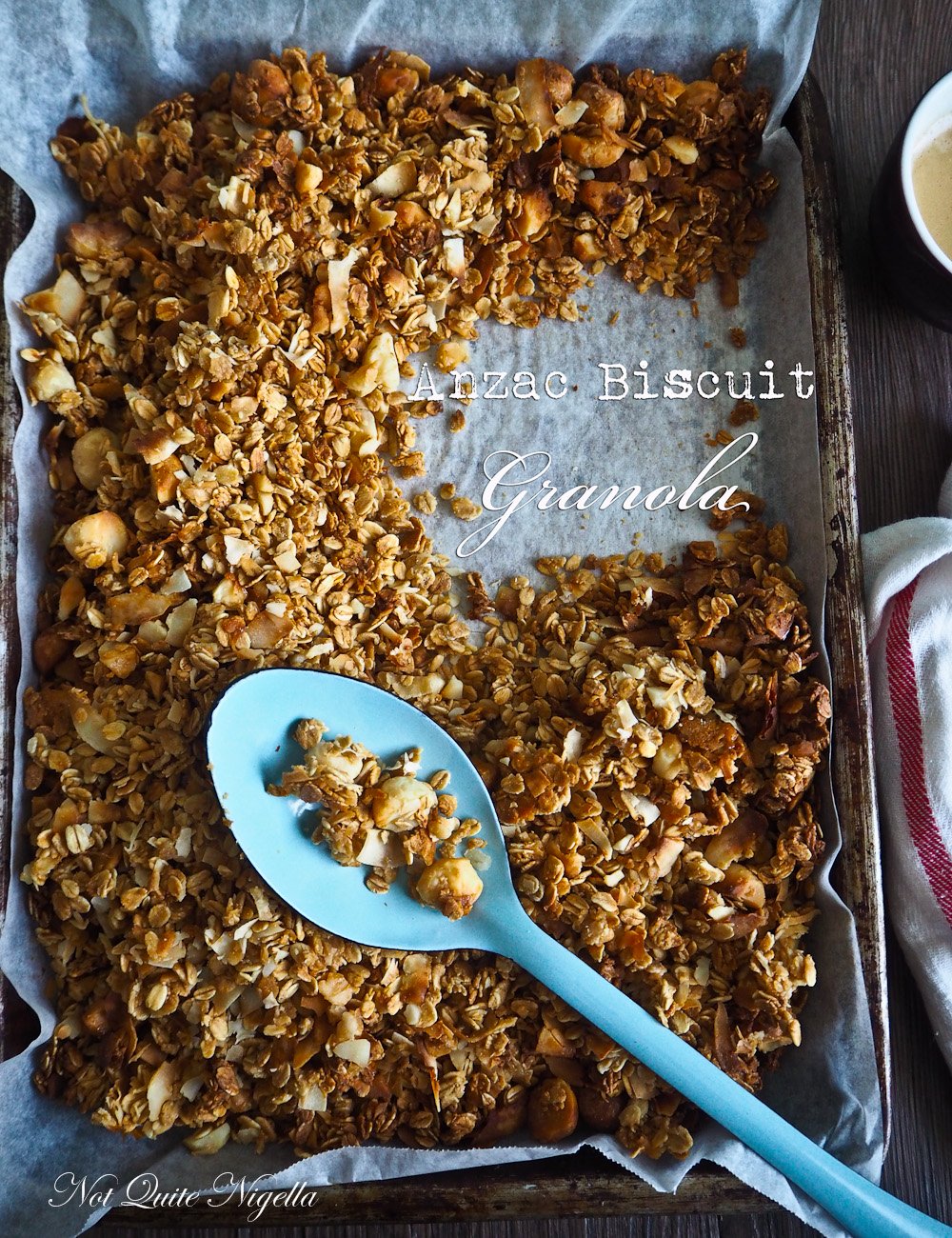 All of the goodness of oatmeal and the crunch and flavour of the classic Anzac biscuit with a slight twist-it's in granola form! Perfect for breakfast or as a snack, the coconut, golden syrup and macadamias make this one of the most delicious granolas ever!

Even thought Mr NQN and I have known each other for so many years, occasionally he will surprise me with a tidbit from his wild and woolly hippie country childhood. Bear in mind that the photos make it look quite charming but vastly different from my more "conventional" city childhood.

We were voting a while back at a school and Mr NQN asked me what my school bell was like. I told him that it was a regular bell to which he answered, "Did you know that our school bell was actually a giant conch shell that they used to blow into?"

I looked at him and pictured this all done Lord of the Rings style with kids in loin cloths. Surely he was joking. But no, he assured me that the conch shell was real and that I was the one that was unusual having a regular school bell!

When I was young, muesli was at first considered fodder for hippies, alternatives or European people. Now it is a staple for many. I'm not particularly fond of untoasted muesli but toasted muesli or granola is a delicious snack that I keep in small containers or in a ziplock in my bag because I get hangry (hungry angry) when I don't have food. Carrying food might seem a bit extreme but Mr NQN and I have agreed that it is better this way ;) 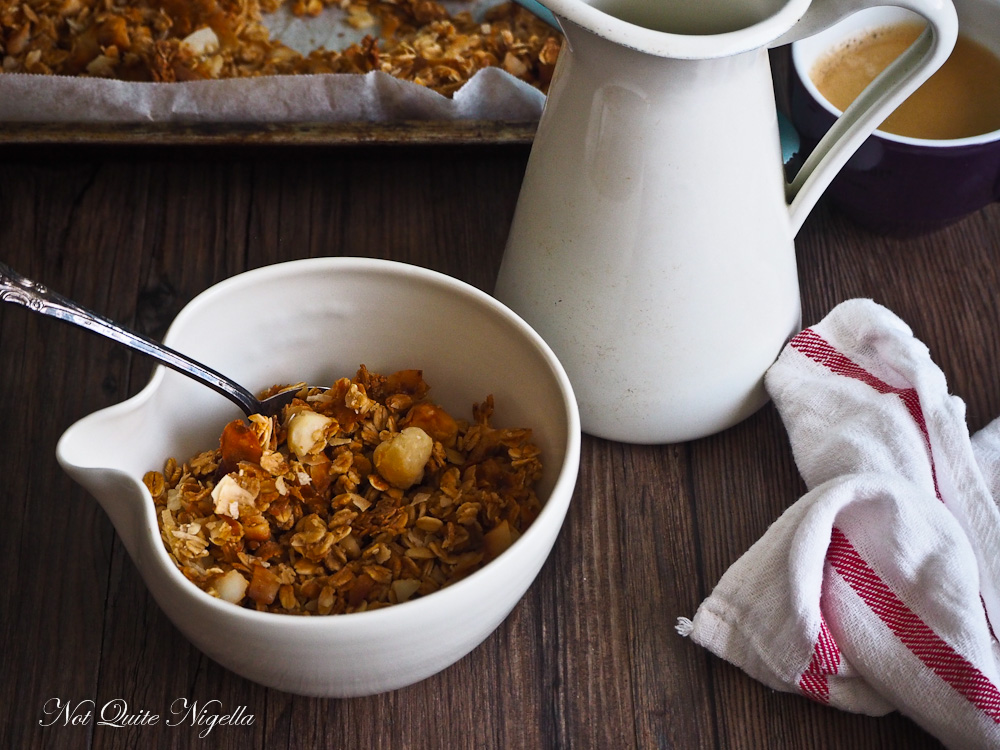 Anzac Day is coming up. For any non Australians, it is a public holiday of remembrance so that we don't forget the sacrifices that the Australian and New Zealand Army Corps made at Gallipolli during World War I. Anzac biscuits (or cookies) are a uniquely Australian and New Zealand treat said to be sent to troops because the ingredients of rolled oats, sugar, coconut and golden syrup were nutritious and didn't spoil easily. If you've never tried one, please give them a go as they are absolutely delicious. I've got a very popular recipe for Anzac biscuits here in case you do want to give them a go.

But one day I woke up on the weekend and decided that instead of making porridge I would make granola. And then I saw the calendar and thought that I could perhaps try making an Anzac biscuit granola! Would it work? I mean they have kind of the same ingredients as a granola but just in a different form! So I tried it and blow me over with a feather this is one of the best granolas you could ever dream up. I use macadamias in my Anzac biscuits which is not strictly traditional but it imparts such a great flavour to them. Feel free to add some dried fruit too if you like the sound of it (I'm thinking dried pineapple pieces for the coconut). And yes this is a pushy recipe if you like making your own cereals or mueslis. Even better is that it is low in fat as the oats aren't sprayed with oil, we use juice instead!

So tell me Dear Reader, do you get hangry? Do you carry food in your bag? If so, what do you carry? I've got a plastic fork and a knife in there too (which does get me odd looks when they get tangled up in my earphones or keys).

Step 1 - Preheat oven to 170C/340F and line a large or two small baking trays with parchment. In a large bowl, mix the oats, coconut flakes, macadamias and brown sugar and stir to combine.

Step 2 - Heat the apple juice on the stovetop or in a microwave until warm and stir the golden syrup and salt into the juice. Pour half the juice over the oat mixture and stir to combine. Pour the rest of the juice and coat all the oats evenly. 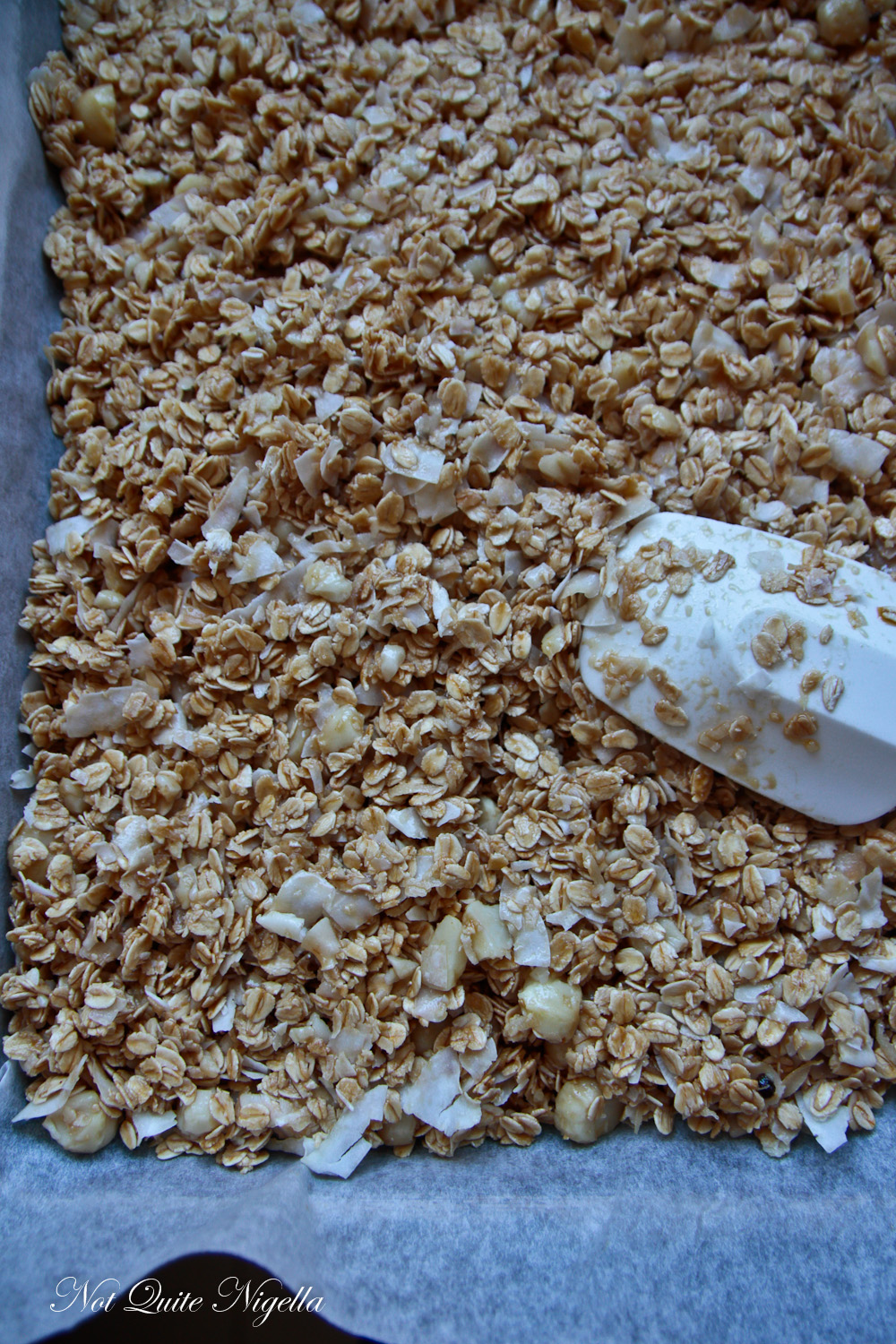 Step 3 - Empty onto the prepared tray/s and spread out evenly. Bake for 20-25 minutes until toasted at the edges. Remove from oven and redistribute the cereal so that the oats cook evenly. Bake for another 15-20 minutes until everything is crunchy and toasted. When cool add the dried fruit if you are using it. Store in an airtight container. 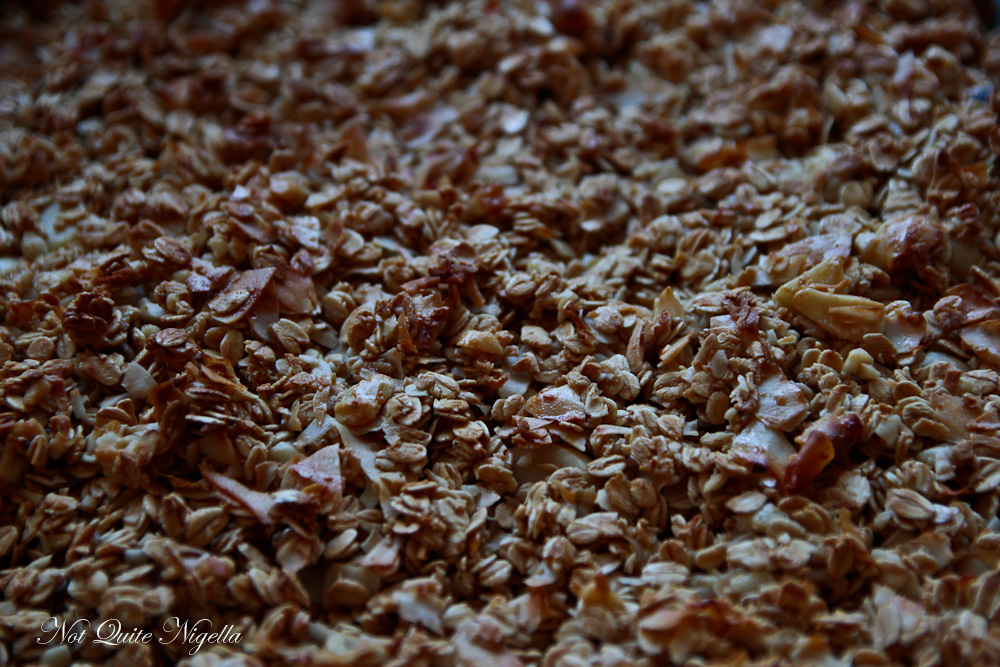