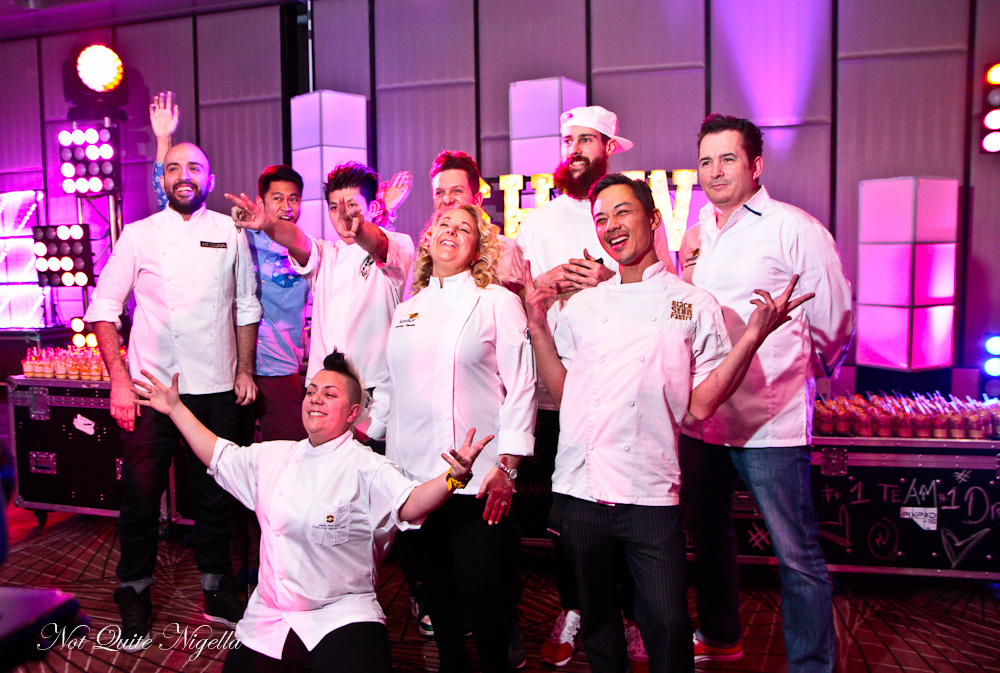 The Shangri-la Hotel's annual Sweet Street event is a celebration of all things sweet with pastry chef Anna Polyviou and her friends putting on a spectacular night where your Willy Wonka-like dreams come true! Take a peek at what these amazing patisseriers from Sydney and Melbourne have to offer!

They say for every reaction there's an equal and opposite reaction. And it seems for every member of the anti sugar crowd, there are just as many who swoon over sweet confections from Australia's patissiers who ply their trade like snake charmers. Instead of using music they entice you to nibble a bit of watermelon and rose cake here, a soft, light honey drenched Greek donut there or a dense and rich chocolate malteser cake with a hint of salt. 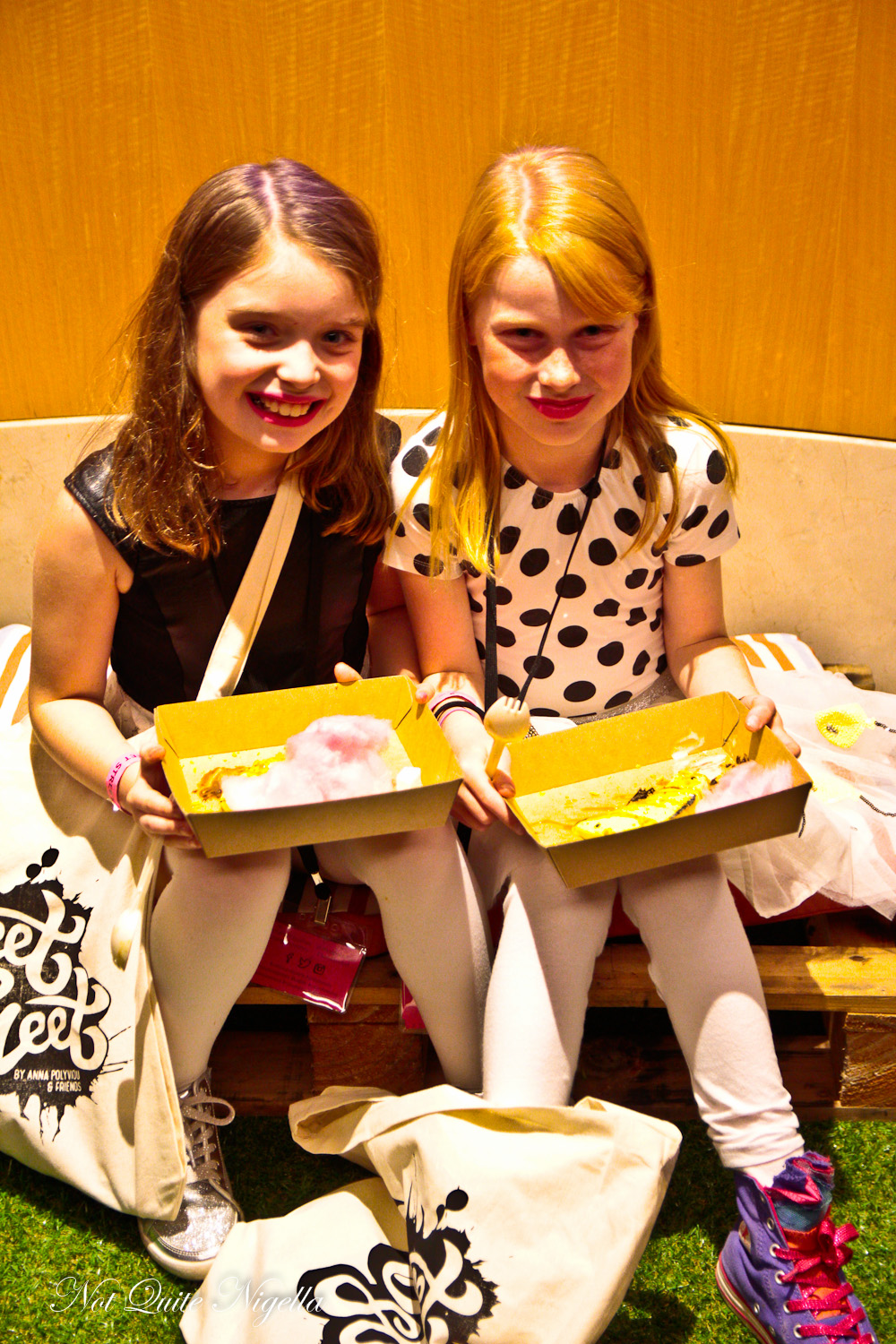 For the second year the Shangri-la Hotel's executive pastry chef Anna Polyviou has gathered her patisserie friends together to unleash the ultimate sugar fest hosted at the hotel. $75 buys you entry and gives you a card of 8 tokens. Most items retail for 1 token. Once you're there an additional card of 8 tokens can be purchased for $30 which evens out the value. And not even jetlag can stop me coming along this year!

Anna says, "This year was about more chefs, the best in Australia, making it bigger in size and bringing more personality not just with the chefs but graffiti with Sid and his daughter or the workshop boys doing their thing. I also have 3 DJs, more dancing and also drumming." 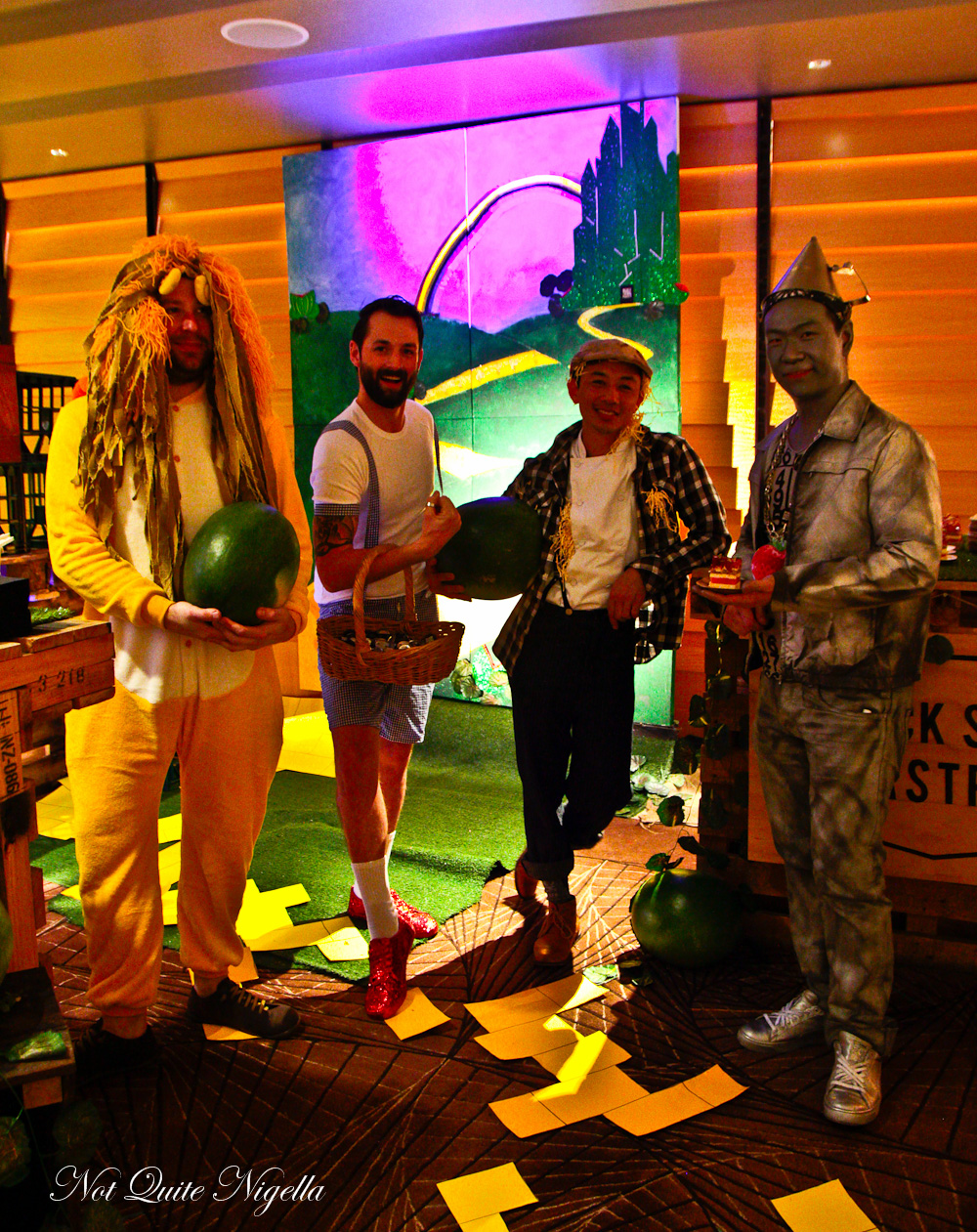 This year unlike last year the capacity has almost doubled with 900 people attending (500 previously) and it is split into two floors. The first section has the Black Star Pastry team dressed as the Wizard of Oz characters selling their famous Watermelon cake (they're located on Australia Street in Newtown so "Oz" was chosen as their theme). 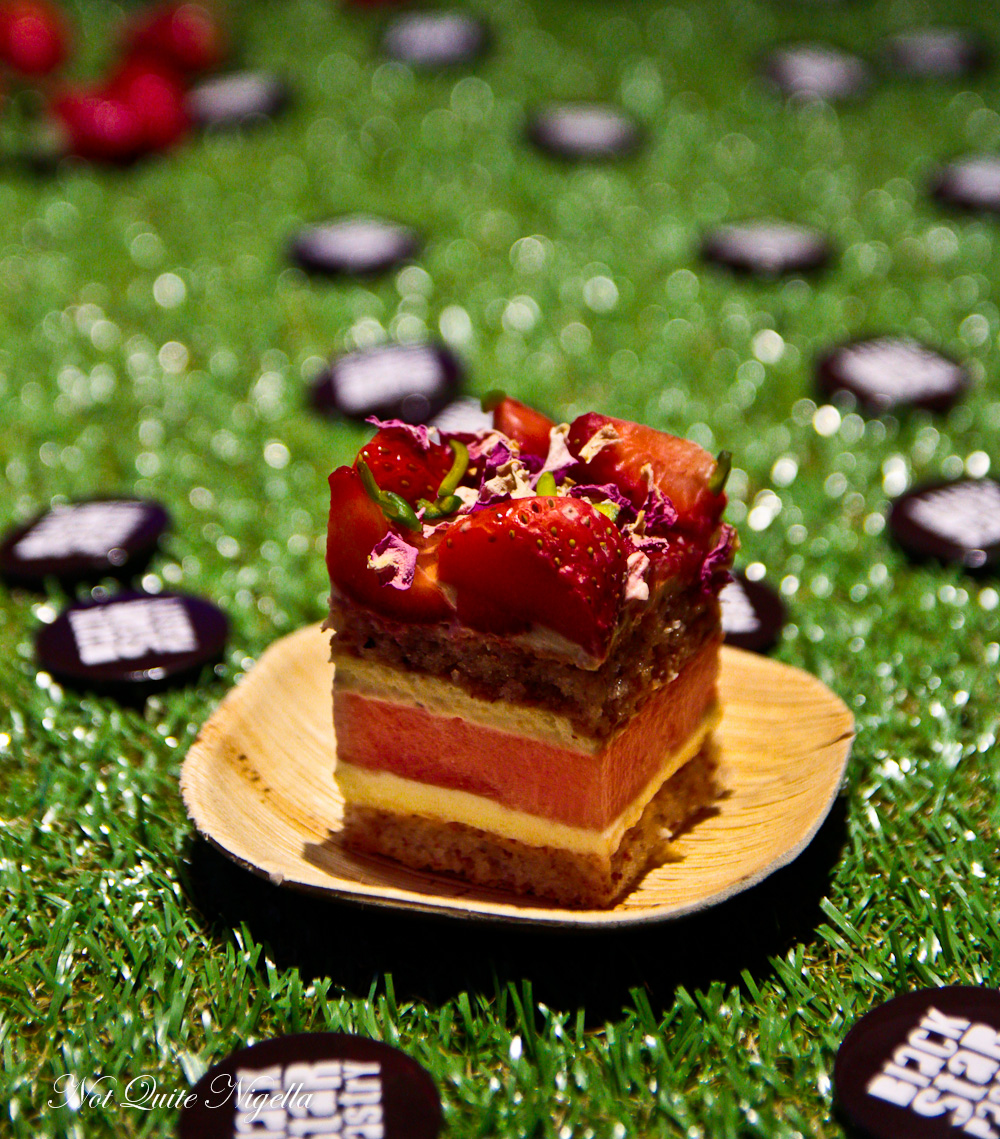 There is a table set up for the watermelon cakes (1 token each) encouraging people to Instagram and photograph their cakes. Christopher The and his team of Eddie Stewart, Samuel Yeo and Kris Jones are dressed up as the scarecrow, cowardly lion, tin man and Dorothy respectively. And the watermelon cake? It's almond dacquoise layered with fresh watermelon, strawberries, cream, pistachios and rose petals. Well there's a reason why it's one of the most photographed cakes on Instagram. Not only is it pretty but it's refreshing, light and perfect for a dessert buffet which is really what this event is. 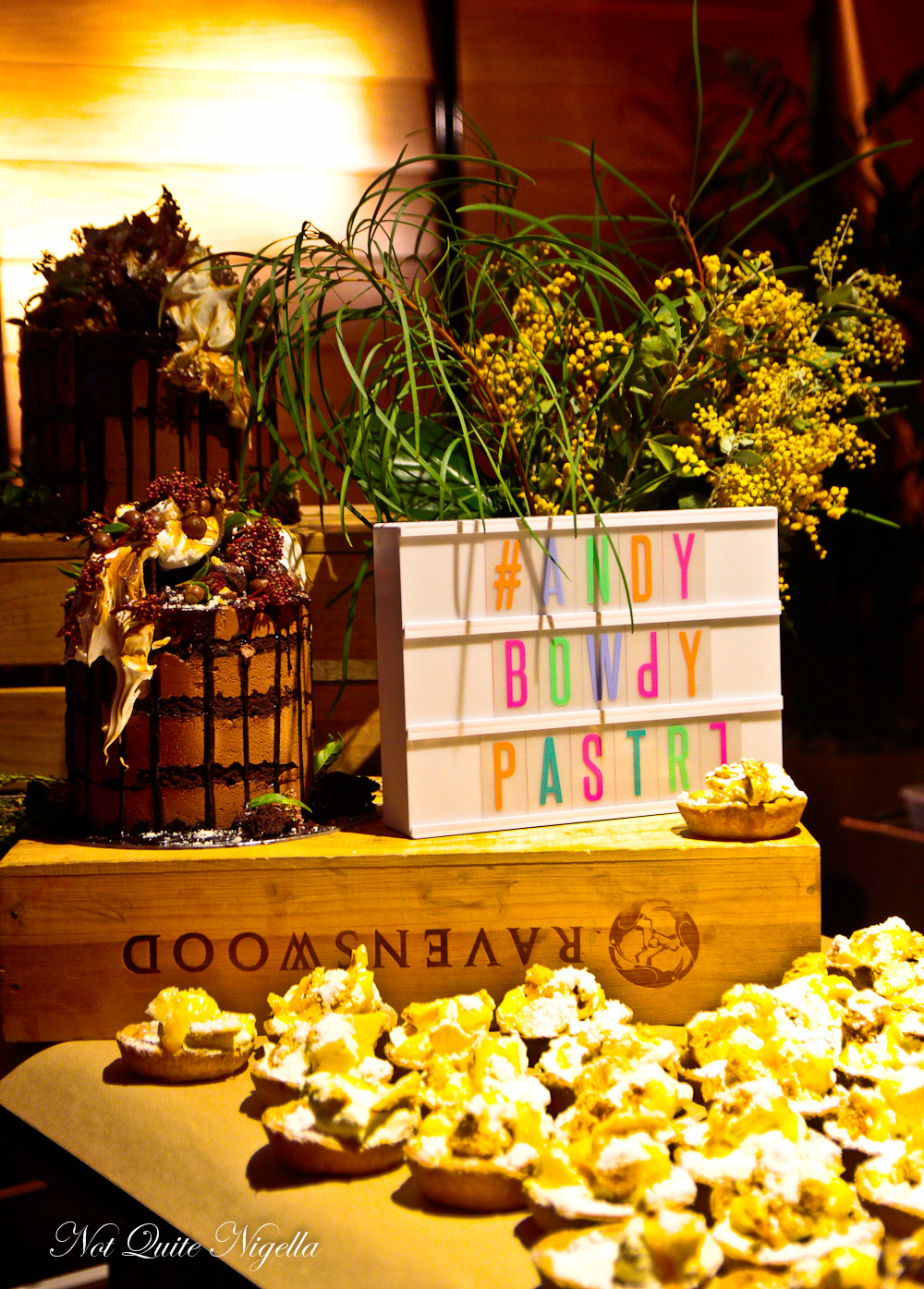 Next to Black Star is Hartsyard dessert chef Andy Bowdy who soon will be branching out to have his own dessert and cake making business. He has an ambitious four items for sale this evening; there is a Milo Malteser cake (2 tokens) and a salted honey tart (1 token) as well as a deep fried cheesecake and a deep fried Nutella and cherry pie. He stands by the deep fryer nervously as the customers file in and eagerly and patiently wait for their order to be taken (his assistants are AWOL). "Deep frying everything was probably a mistake," he says. 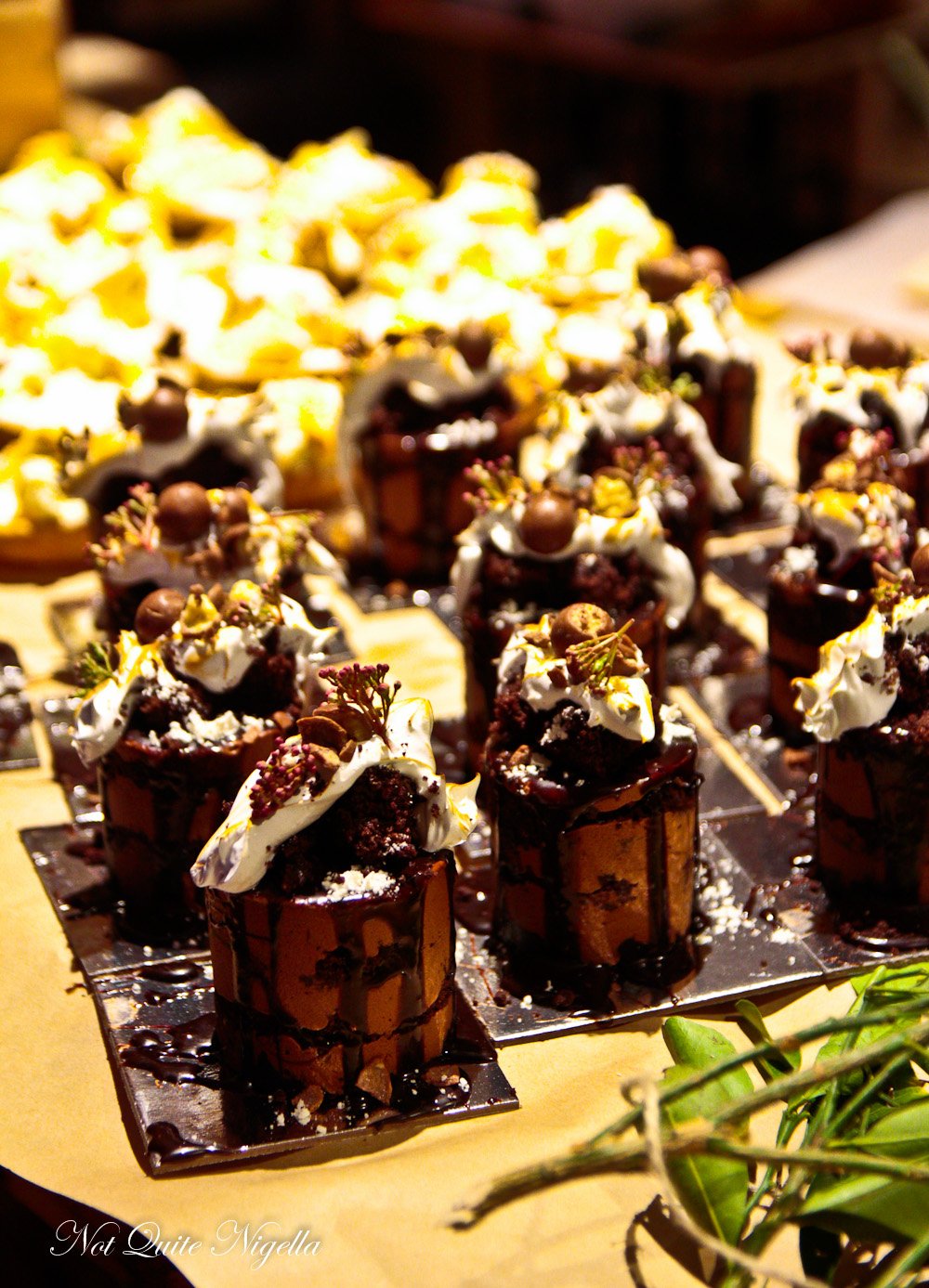 I try some of the Milo Malteser cake. It's dense and rich and chocolatey with a malty crisp layer at the bottom but the one that steals my heart is the salted honey tart. The puff pastry is crisp, there is a salted honey custard, mandarin gel, whipped citrus cream and pieces of honeycomb on top. It's utterly delightful and totally three bite rule resistant. 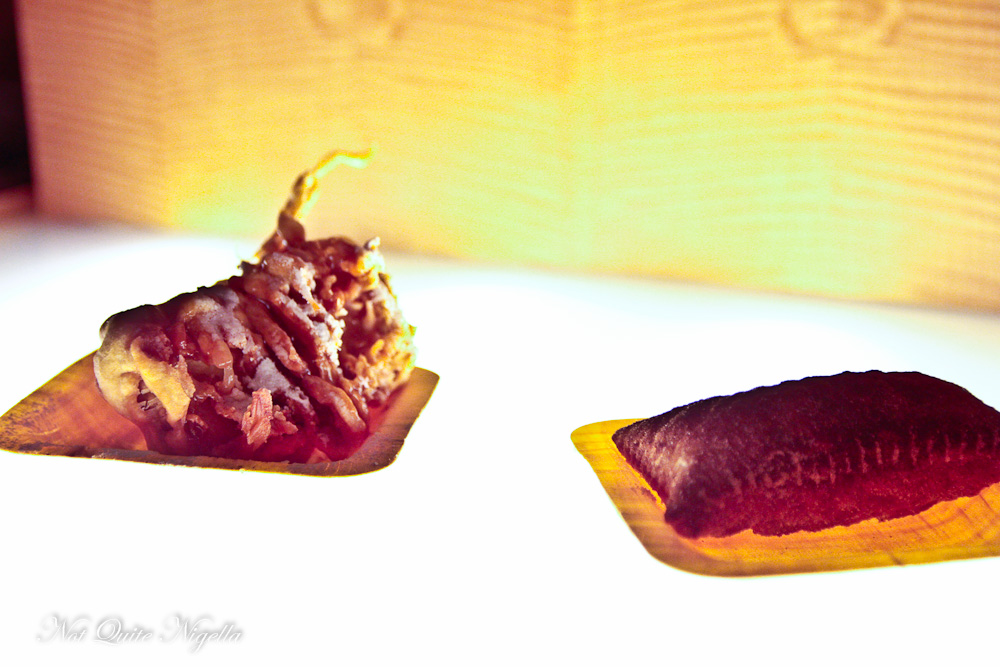 The deep fried cheesecake is a tasty novelty with a crunchy light batter on the outside and a caramel sauce drizzled on top and the Nutella and cherry pie is like a fancy much better version of a McDonald's apple pie rolled in cinnamon sugar. It's crisp and moreish in that way that deep fried food can be. 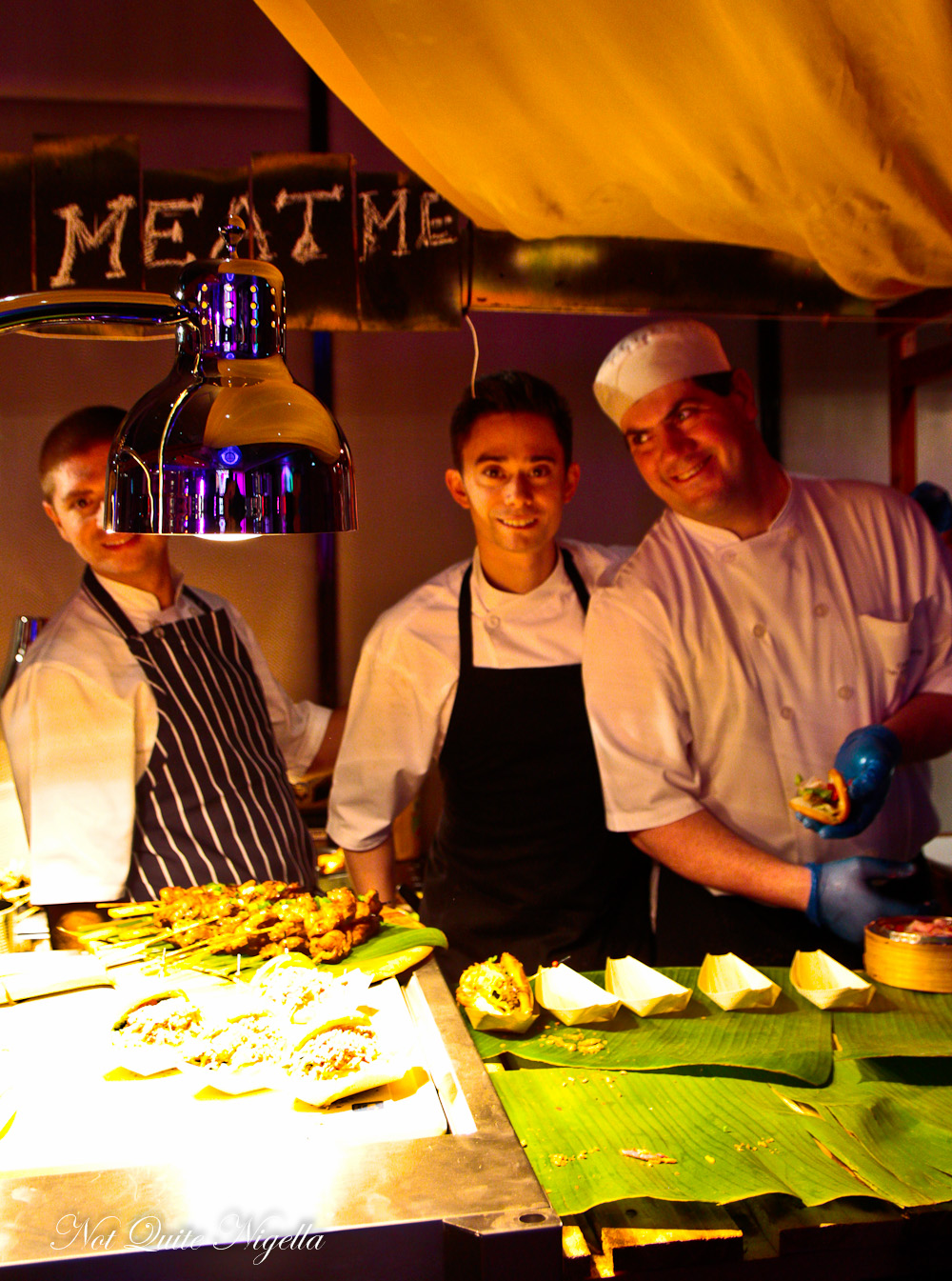 But I'm getting ahead of myself because I know that I should be eating savoury before dessert but no judgment if you're more a sweet before savoury person, I wish I could do it. I head downstairs to the ballroom where I know that the first queues to be hit will be the savoury ones because like last year, everyone is heading here from work and haven't had dinner yet. 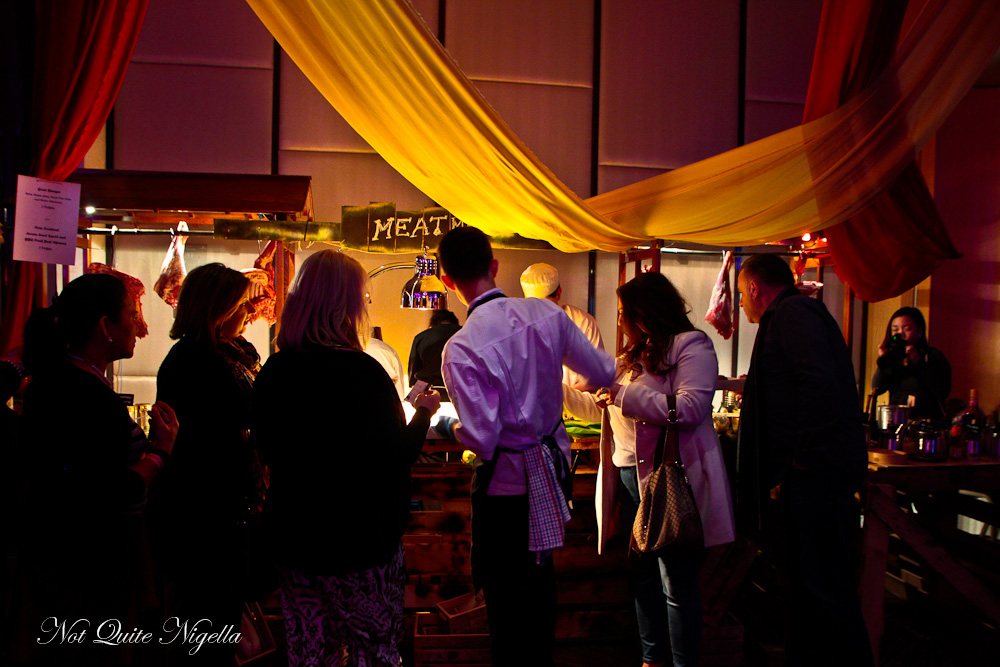 Shangri-la's Head Chef Bo Ip Sorensen is busy at the "Meat Me" station selling arrowhead squid with coconut sauce, goat baogers and grilled pork satays. He's the lovely chef that works with the Gourmet Goat lady and who procured me a delicious goat ham. The pork satays are succulent and have the perfect amount of char. 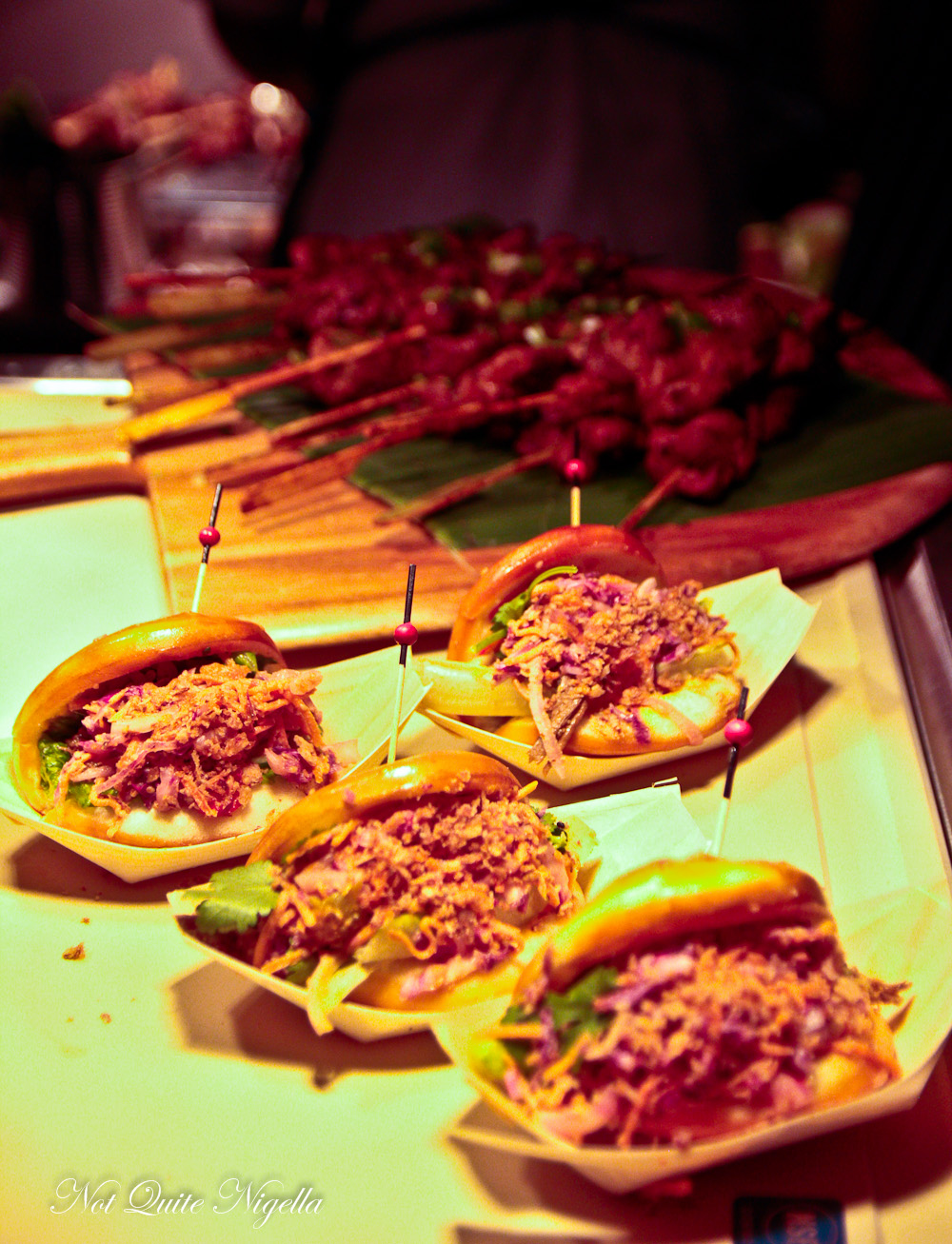 The goat baogers which are also available at their restaurant Shayan Quarter are crispy deep fried on the outside but not at all greasy. The goat filling is soft and slow cooked with a punch from the hot chilli inside and crunch from water chestnuts. Just leave the whole tray with me thank you and no-one will get hurt. 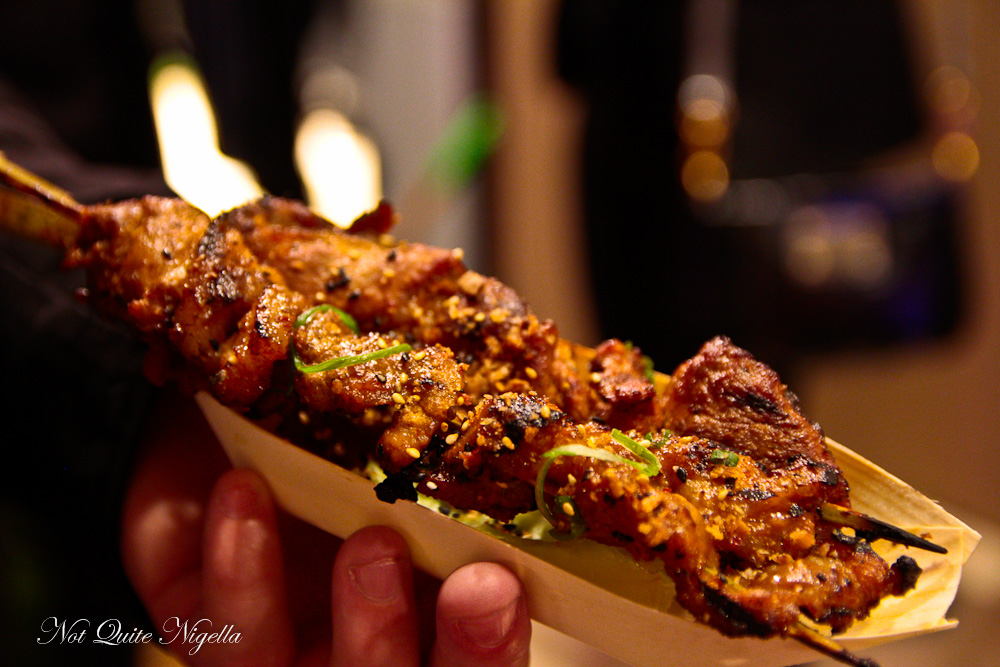 It's not just pastry and cakes as there's also N2, the nitrogen gelato company with branches in Sydney and Melbourne. Their concept is a "Cake Smash" where they have created two gelato flavours both inspired by Anna's award winning carrot cake and Black Star Pastry's watermelon cake. 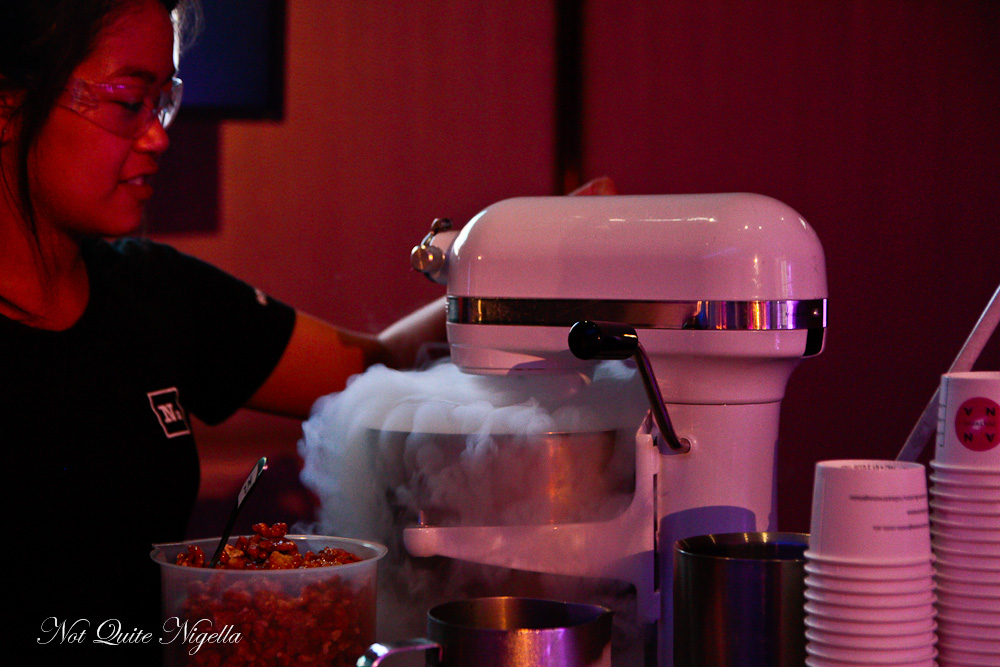 Their carrot cake features carrot cake crumbs, apricot carrot jelly, carrot cake chunks and spiced hazelnut praline gelato. Their watermelon gelato is made up of whipped rosewater cream, cream gelato, strawberry rose jelly and chunks of watermelon rose cake. It's hard to decide which I prefer. One is rich and sweet (the carrot cake) while the other is refreshing and fruity. 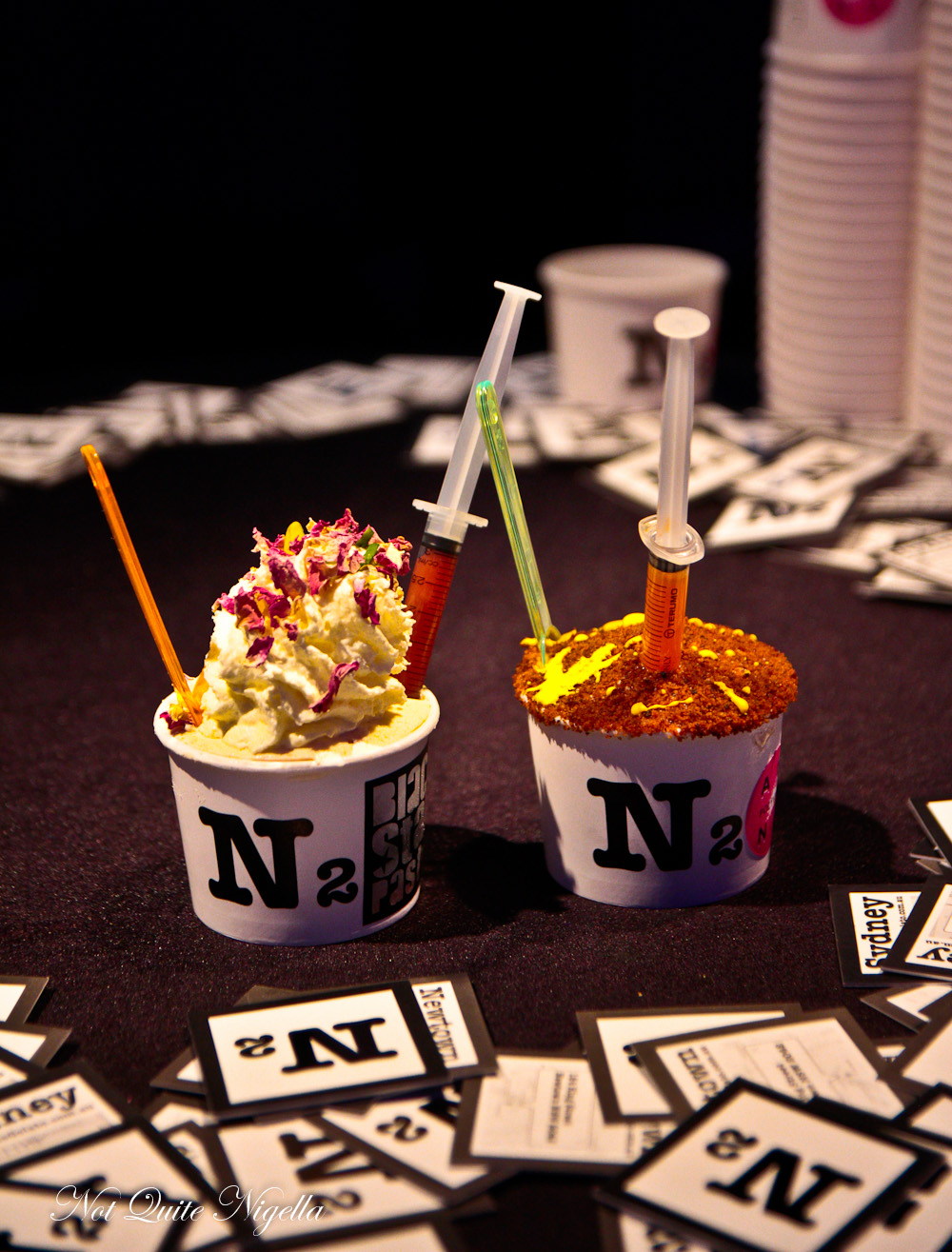 Next is the lady of the moment Anna Polyviou's stand where her team are busy handing out verrines in three different flavours: the first is a version of her carrot cake verrine (praline, walnut mousse and macaroons), then there is a blueberry & yogurt verrine (yogurt mousse and cinnamon crumble) and also a Tropical Anna verrine (passionfruit posset, coconut tapioca). I must admit that I am suckered into tart crunch of the blueberry verrine having tried the carrot cake one before which is delicious but my favourite were the loukoumades drenched in honey syrup with caramelised popcorn and a caramel injection. 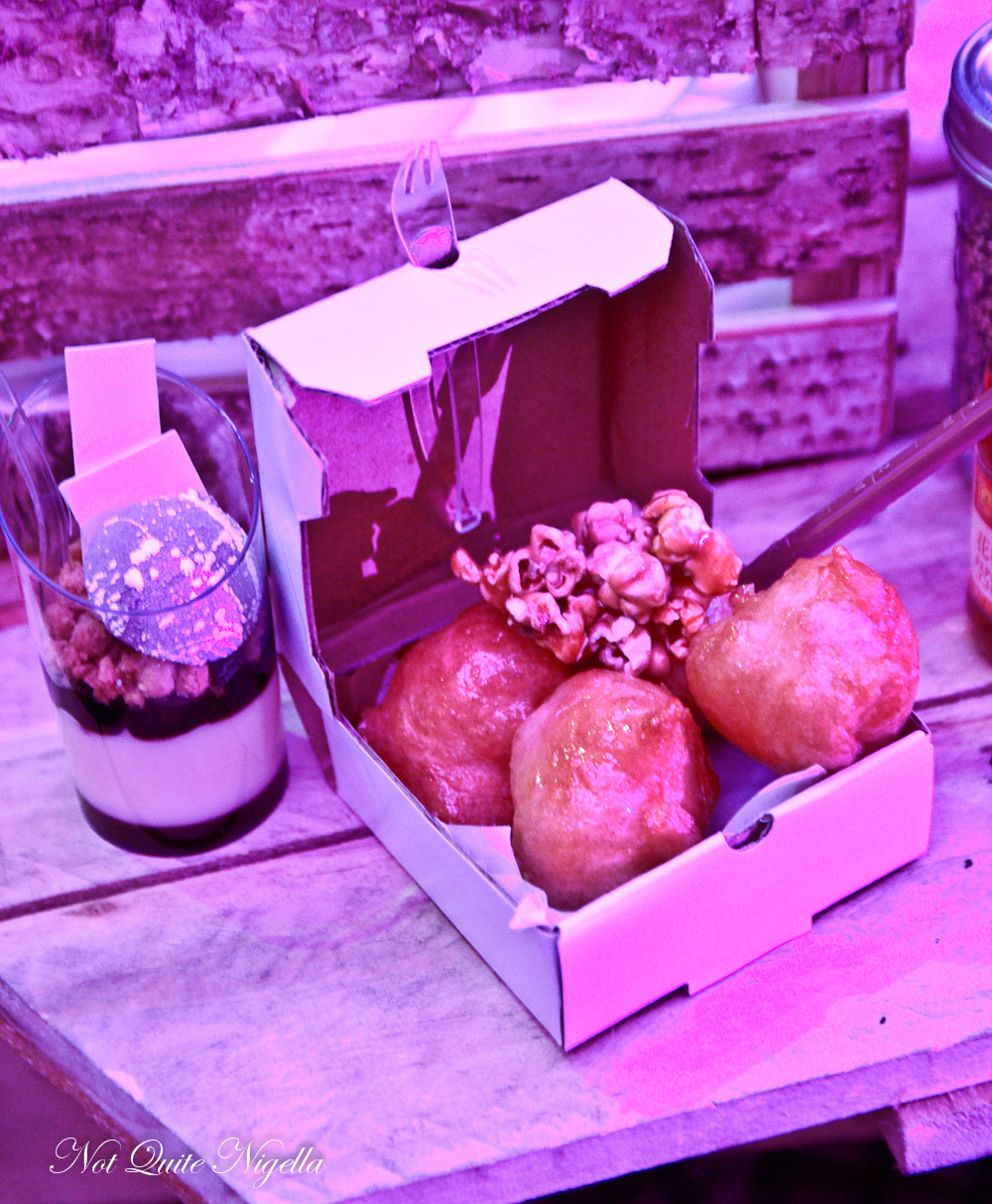 "I'm trying to recapture my culture," says Anna of the loukoumades or the Loukou-Annas as she calls them. The texture of the loukoumades is a spongey, light delight and suddenly I want to eat them all in a cave by myself so that nobody else will try and pinch them. And then I woke up out of my stupor and wiped the honey from my mouth. Get a grip! 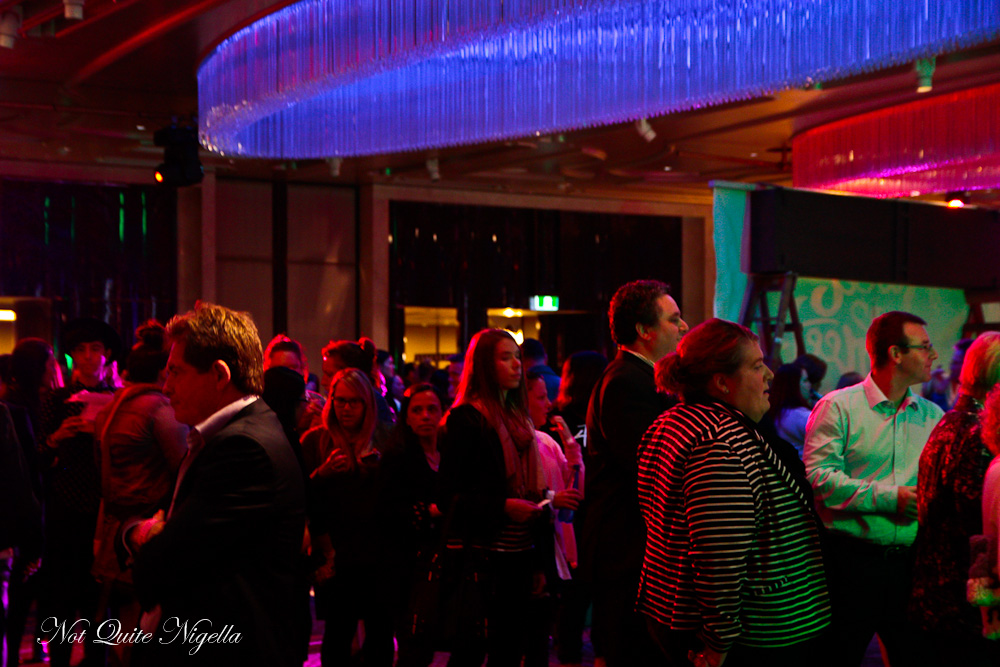 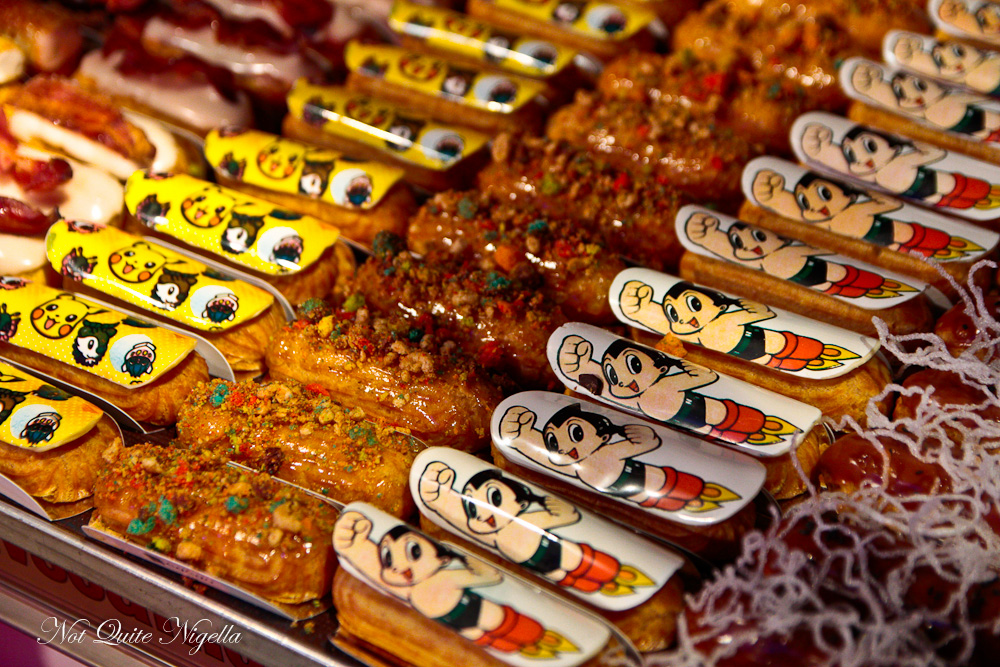 The crowd is in full force now and I know that I need to head to the Cacao stand because last year their queue was crazy long and they sold out really quickly. 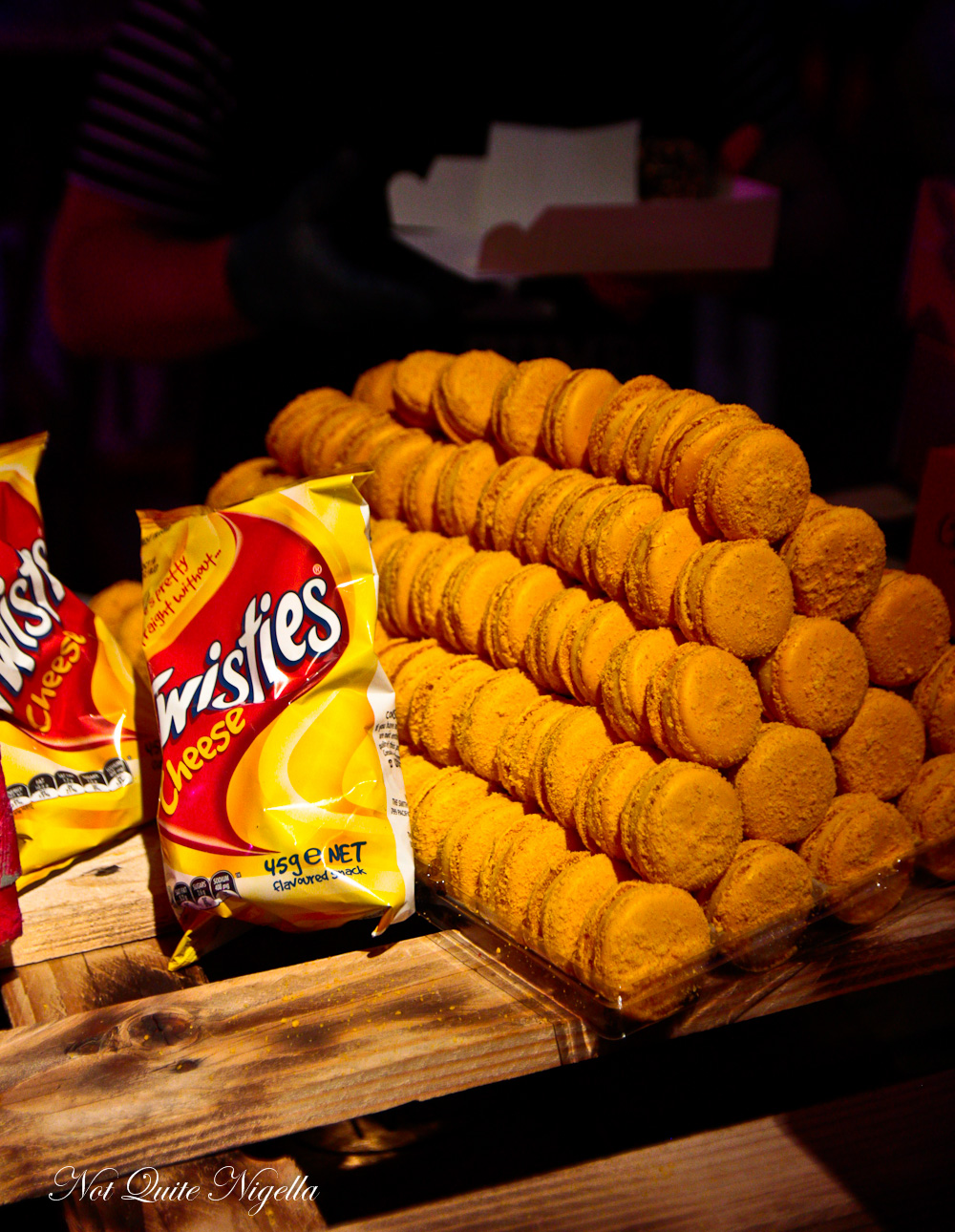 Cacao are a brand from Melbourne and Tim from Cacao is busy taking orders. Unlike last year the stands now have menus so people can make their selection although I must say it doesn't make choosing very easy because I still want all of them. I end up with four (1 per token) with maple bacon (oh sweet bacon perfection with maple custard, maple glaze and vanilla egg custard); Misofancy (miso caramel, milk chocolate cream and caramel glaze and black sesame noodle); S'mores (chocolate creme, graham cracker, chocolate flake & toasted marshmallow) and Astroboy (berries and vanilla cream). 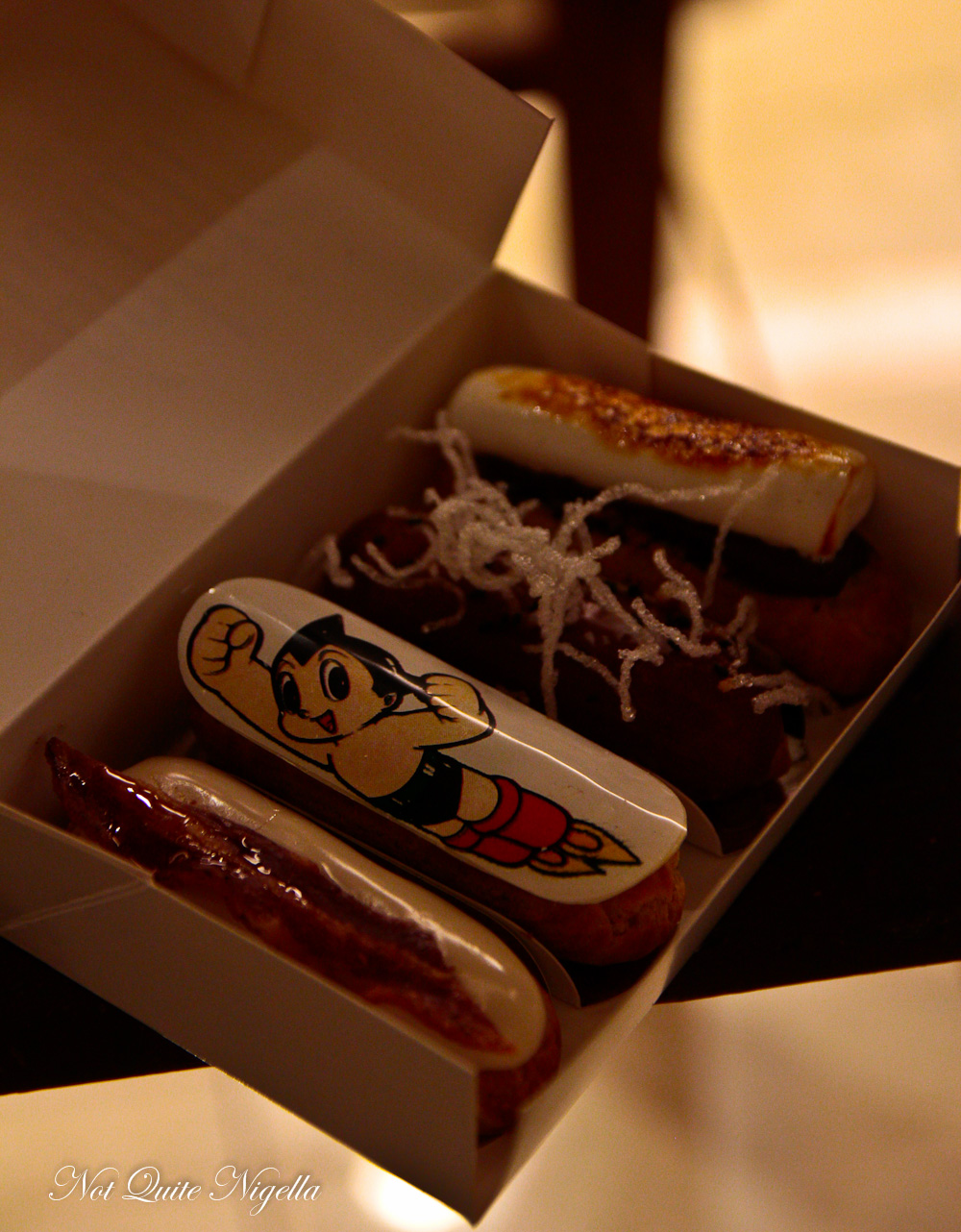 Adriano Zumbo's stand is selling choux macas (choux pastry topped with macarons) and macarons. I can't resist the cheese Twisties macarons as I love Twisties as well as the cereal killer ones. You get two for one token which is pricier than buying them in the store at $3. The Twisties tastes more of citrus than the cheese flavoured extruded snack and the cereal killer is a sweet and pleasant but indistinct flavour, I guess much like cereal. 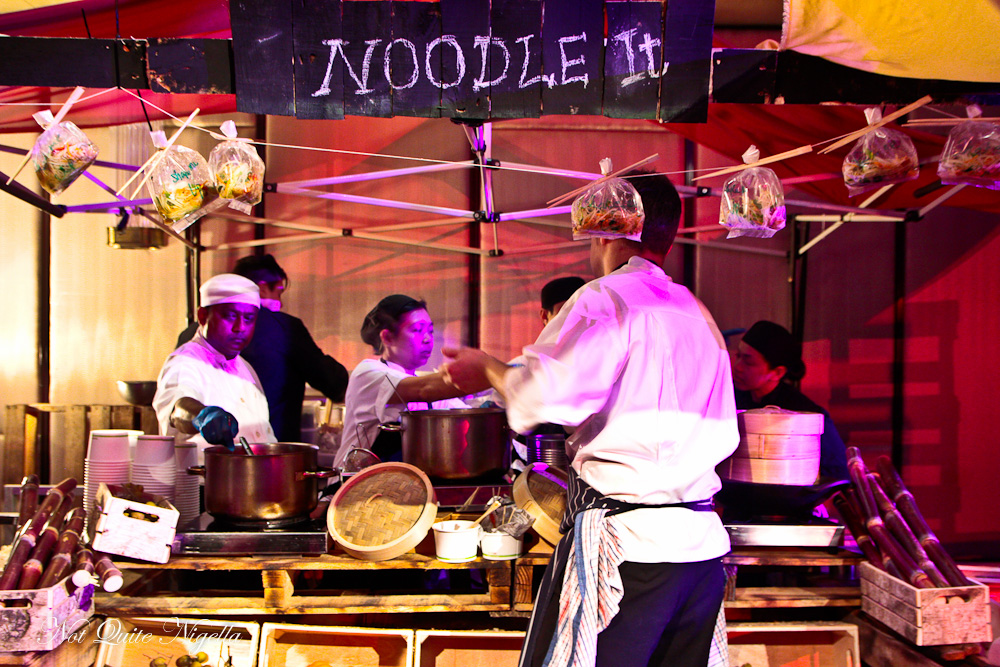 I spot the ebb in the line for the second savoury stand "Noodle it" where Shangri-la's Executive Chef Steven Krasicki is taking orders. There are two items on offer, a Chinese Street noodle Chongquing with hot and sour soup and Hong Kong Cheong Fun made with chicken mince. 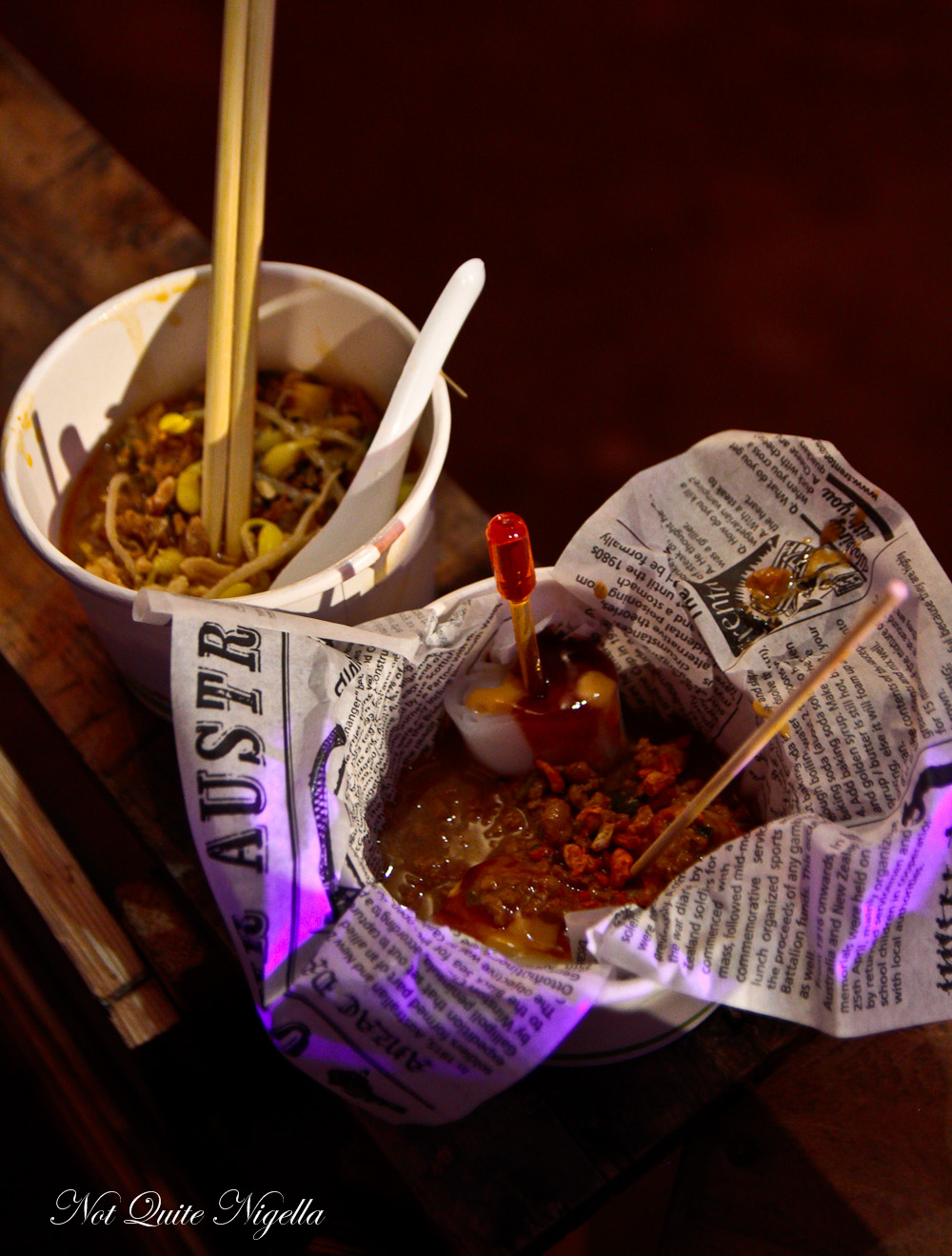 They're both good and spicy but the hot and sour soup is my favourite and we rest our cups on the speakers (one thing, there are still not enough places to sit down and eat at!) and scoop spoonful after spoonful. 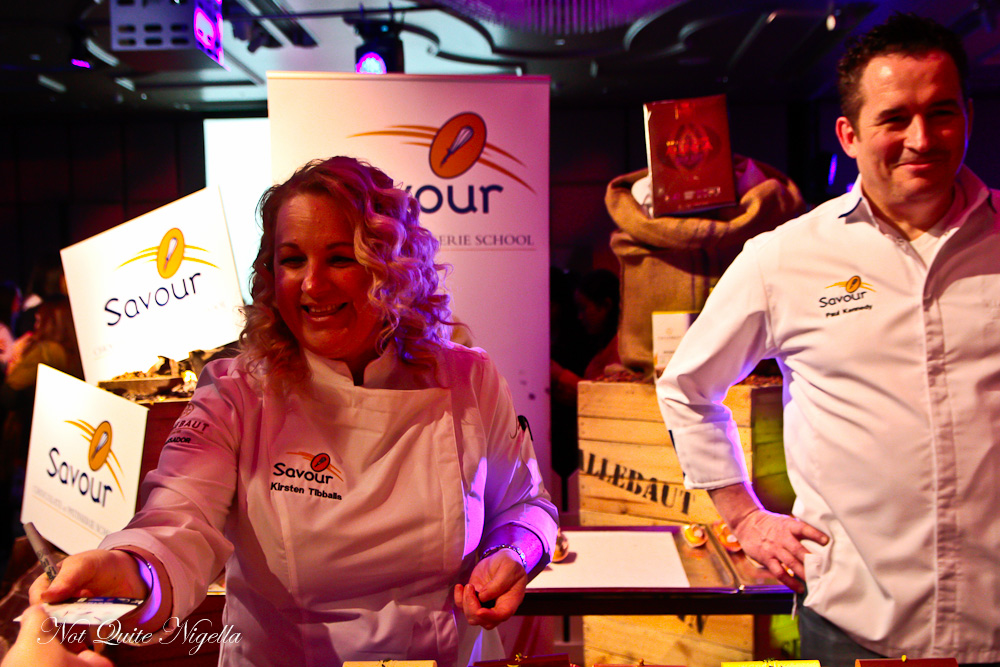 One last stop is at Savour School run by Kirsten Tibballs and she is here with her pastry chef Paul Kennedy. This year their selection is made up of three Chocolate Pipas which is a unique concept designed by Kirsten and Paul. A Pipa is Spanish for pipe and the pipe in this case is a thin chocolate pipe with various fillings. 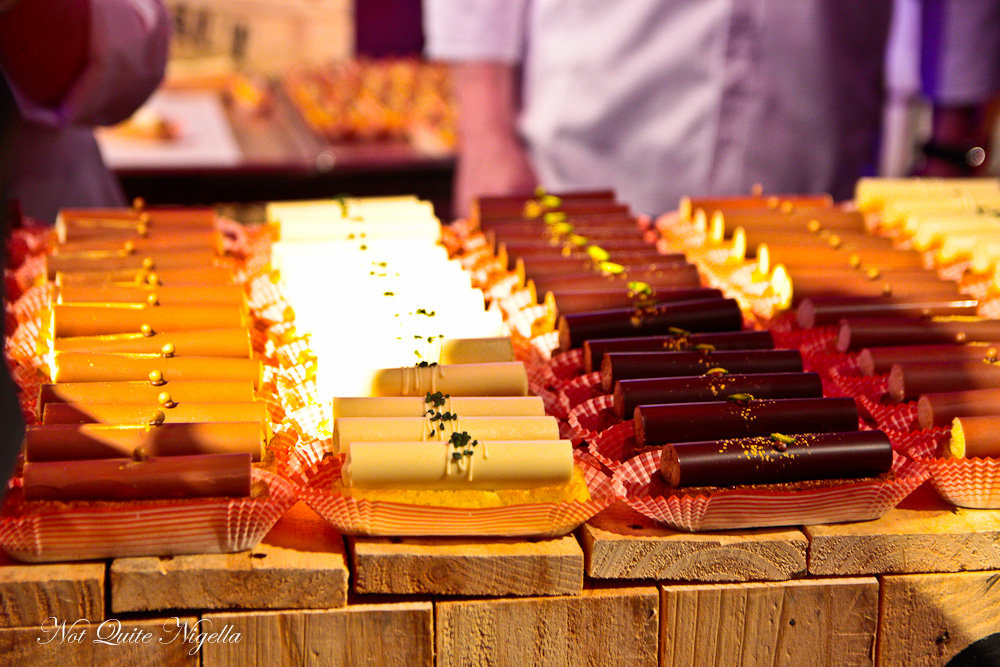 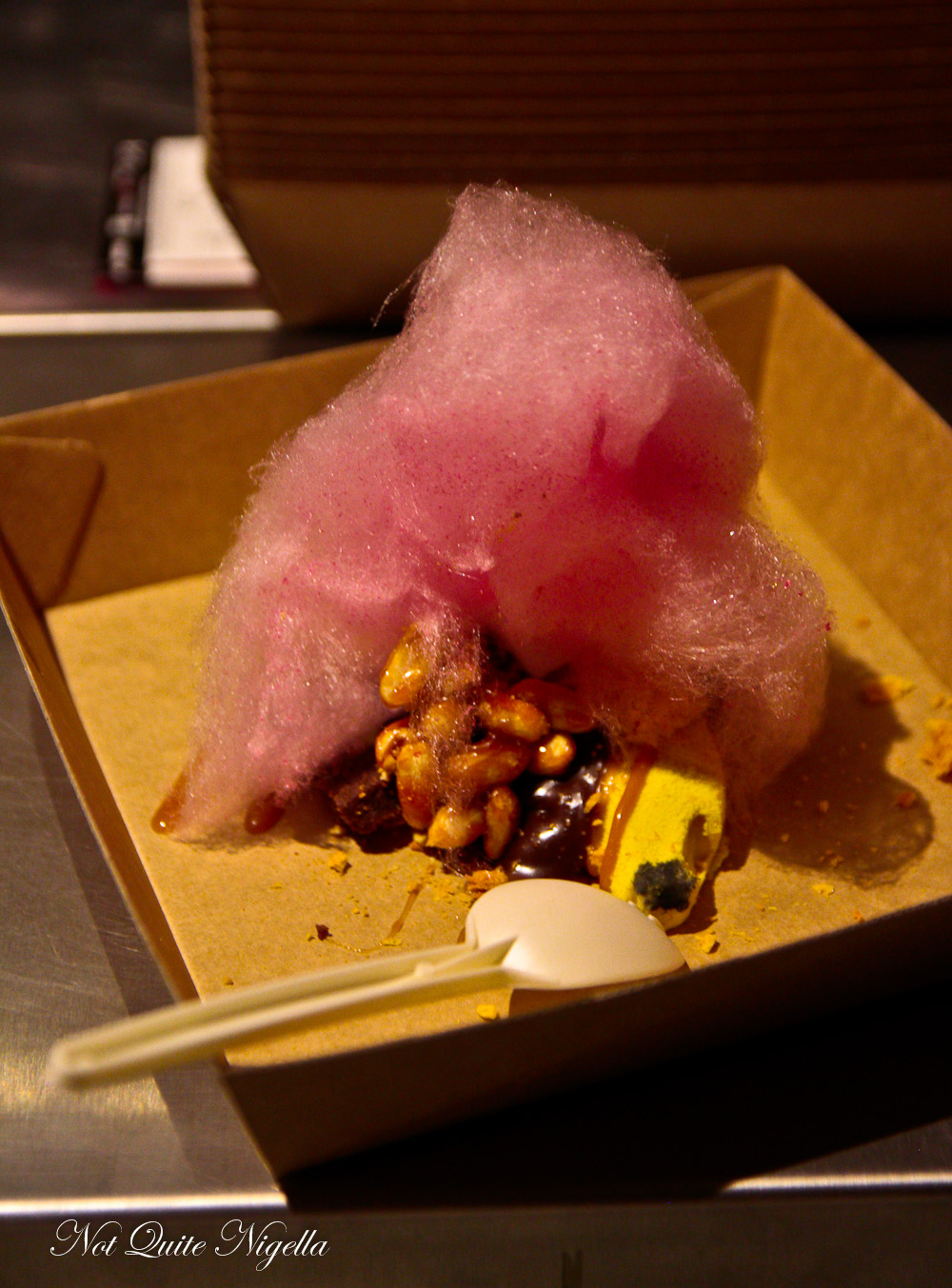 Lastly as we are exiting we try Messina's offering. It's a banana split with an ice cream that resembles a banana topped with a choice of toppings. They offer to make one with the lot of toppings with marshmallow chocolate, caramel sauce, peanut praline, fairy floss, chocolate brownie and honeycomb. The gelato banana tastes good, like of real banana and the caramel and peanut praline go well with it. For two tokens though it's a tad pricey. 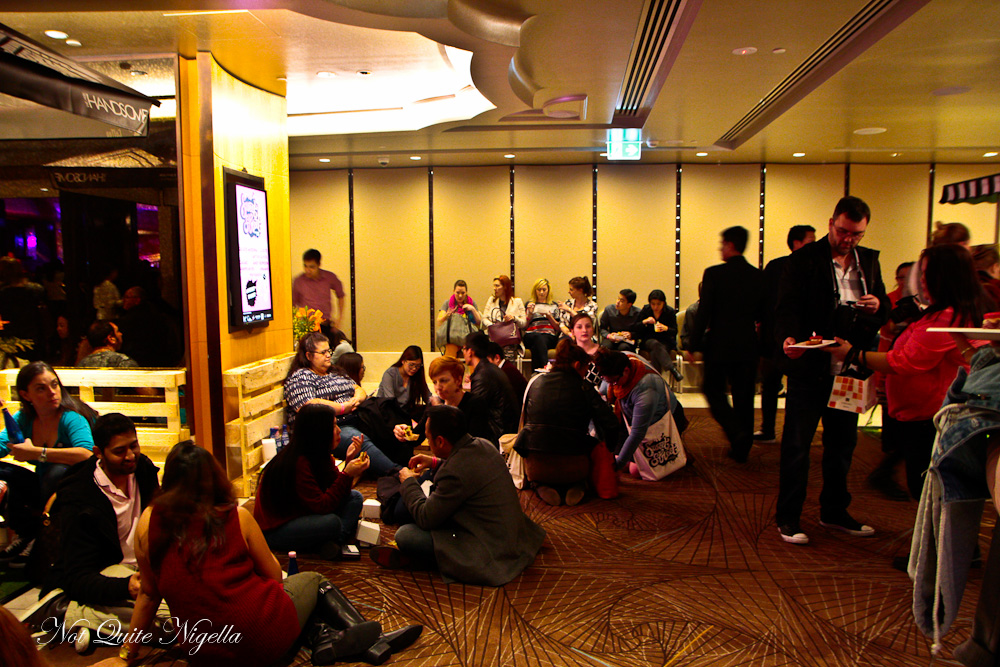 It has been three hours and I am sugared up as well as strangely exhausted much like most people who are sitting on the floor consuming their goodies or resting their feet. This year they've given more boxes to take away things which helps and I share my spoils with the very sweet toothed Mr NQN.

So tell me Dear Reader, would you enjoy a sweets event like this or are you on the no sugar thing at the moment? If you could choose one sweet to eat as your last meal what would it be? And what do you think of the value of the items?

NQN attended Sweet Street as a guest of the Shangri-La Hotel but all opinions remain her own. 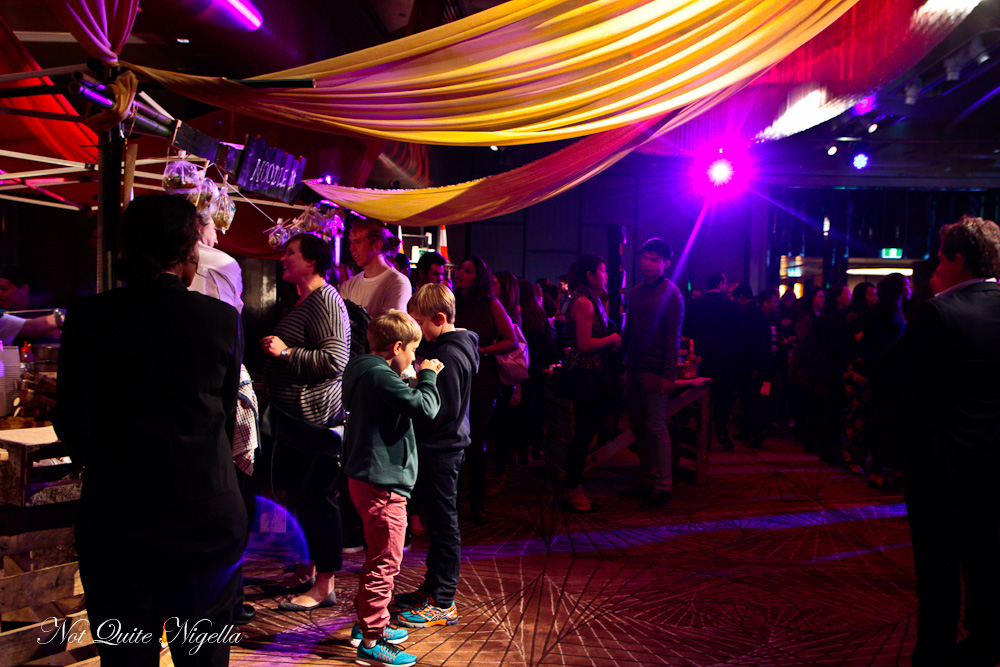