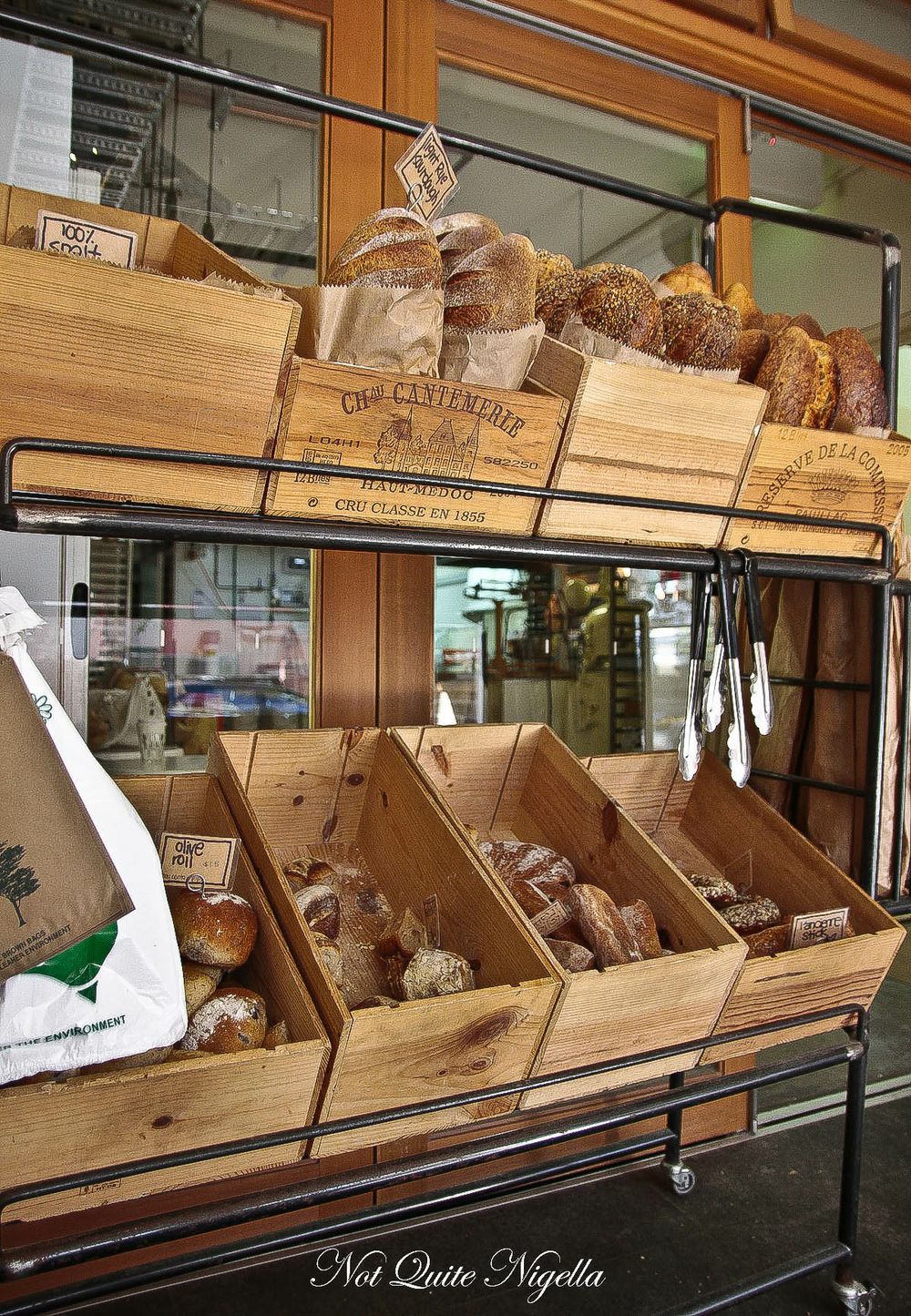 I was making my early morning cup of tea when I looked out the window at our apartment complex's common green area. Instead of being greeted with the usual Sunday morning sight of rows and rows of coloured washing, I saw an enormous tent, balloons, signs for a one year old's birthday party and the sound of bottles clinking. The relative serenity of apartment living was going to be shattered with the sound of dozens of toddlers. 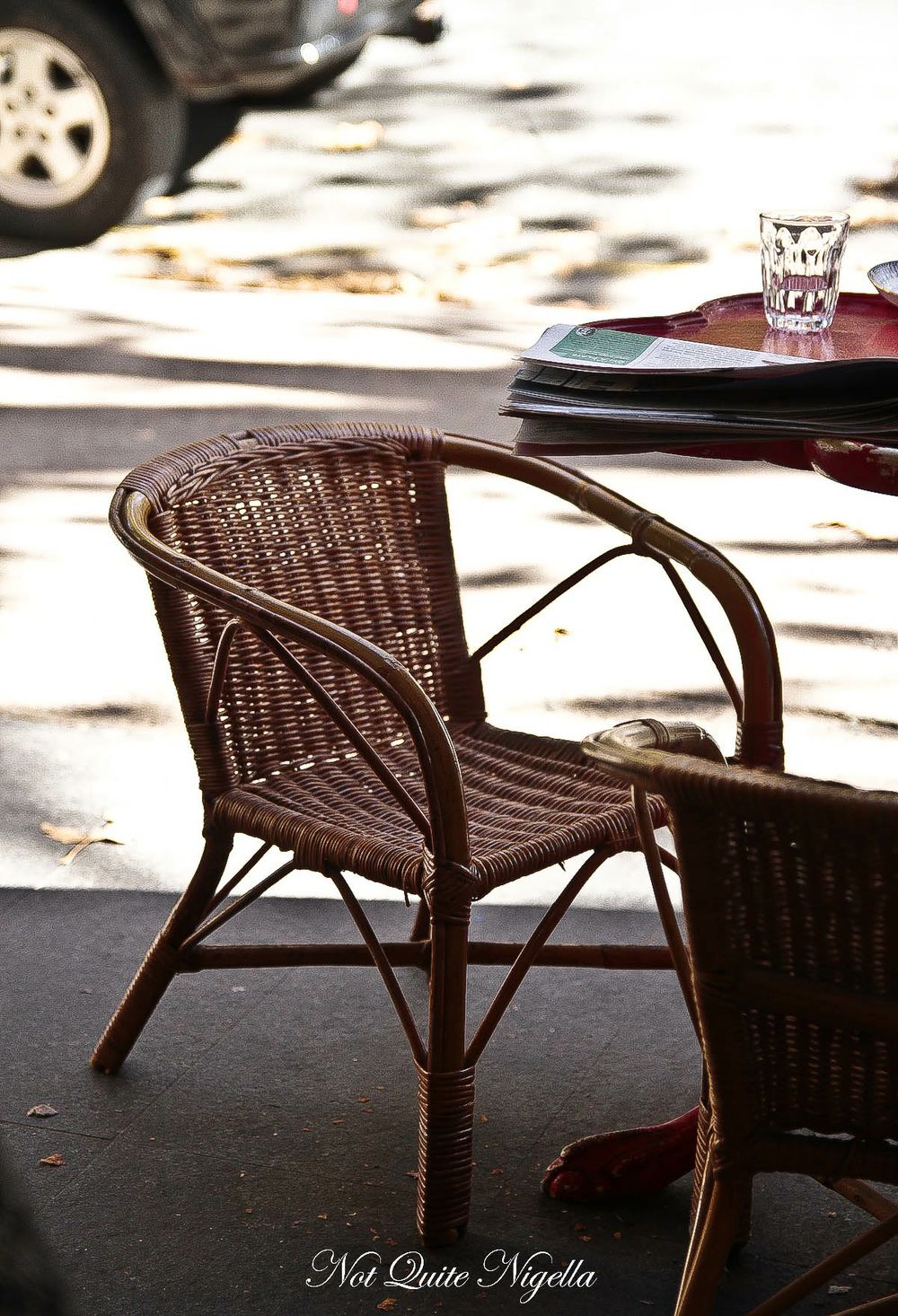 "Honey! Get up! We have to meet Buxom Wench and Silver Fox!" I told Mr NQN eager to ease into the Sunday morning with brunch with friends. A short time later, we were on our way to South Dowling Street for lunch at Organic Bread Bar, a bakery that I have driven past dozens of times. Parking around the area was limited to one hour parks and we crossed our fingers that the parking police are having a good sleep in this Sunday. There were two tables outside opposite the display and a couple of tables inside near the bakery. In the interests of perving as much on our lunch selections we eased our adult sized bottoms into the tiny kid sized wicker basket chairs, breathed a sigh of relief that we actually fitted in them and looked at what was on order. 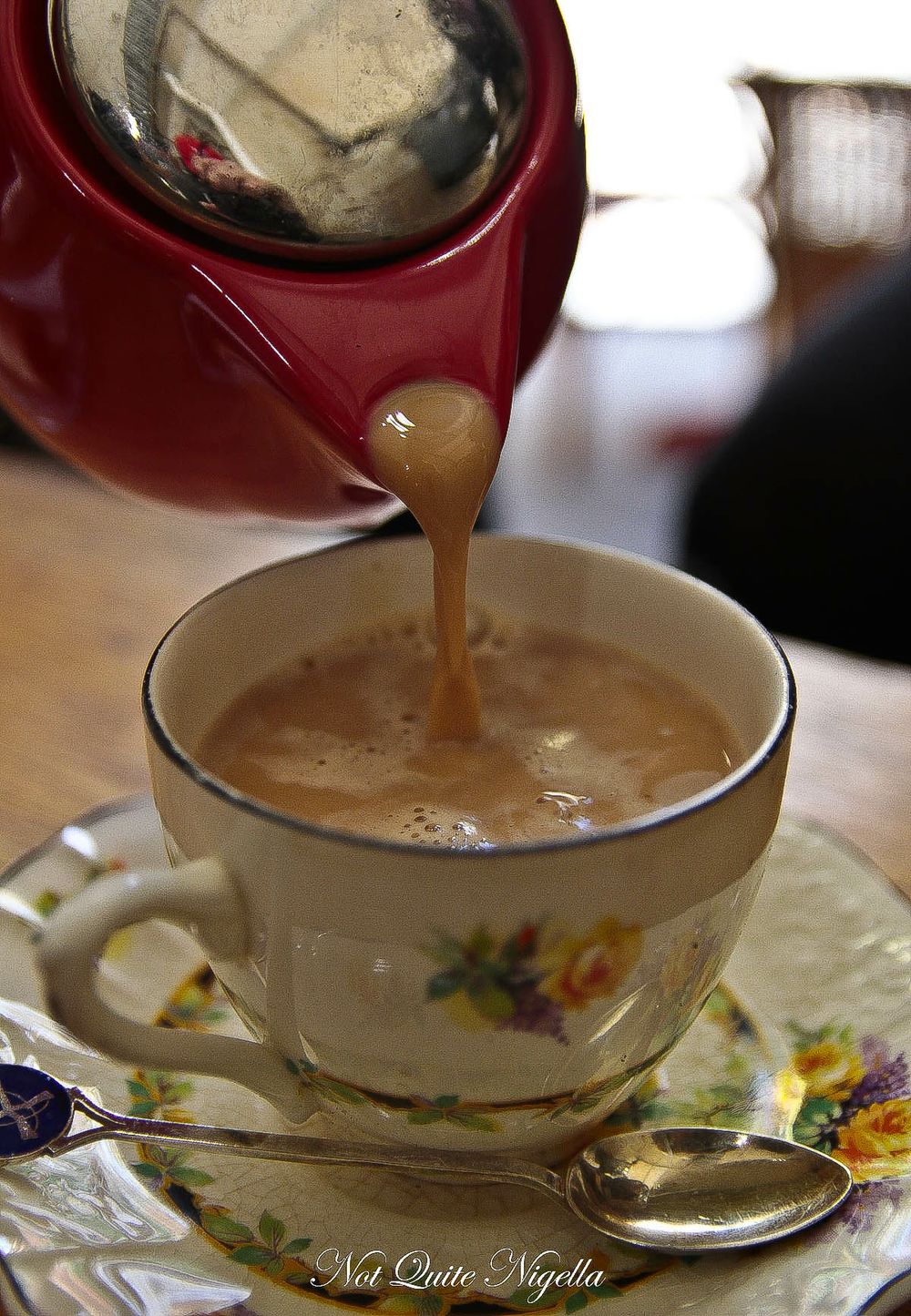 We ordered tea and coffee first, the tea is by TeaCraft and I went for a chai. It's not sweetened with honey as it says but it's an aromatic chai served in cute vintage cups and saucers. Mr NQN's long black is served in a glass cup and saucer set. Buxom Wench and Silver Fox arrived and we ordered food as we were all famished having skipped breakfast. Buxom Wench isn't sold on the kid sized chairs (although she did easily fit in them) and swapped hers for a red and cream stool which balanced slightly backwards and Silver Fox and I went to the counter to order. 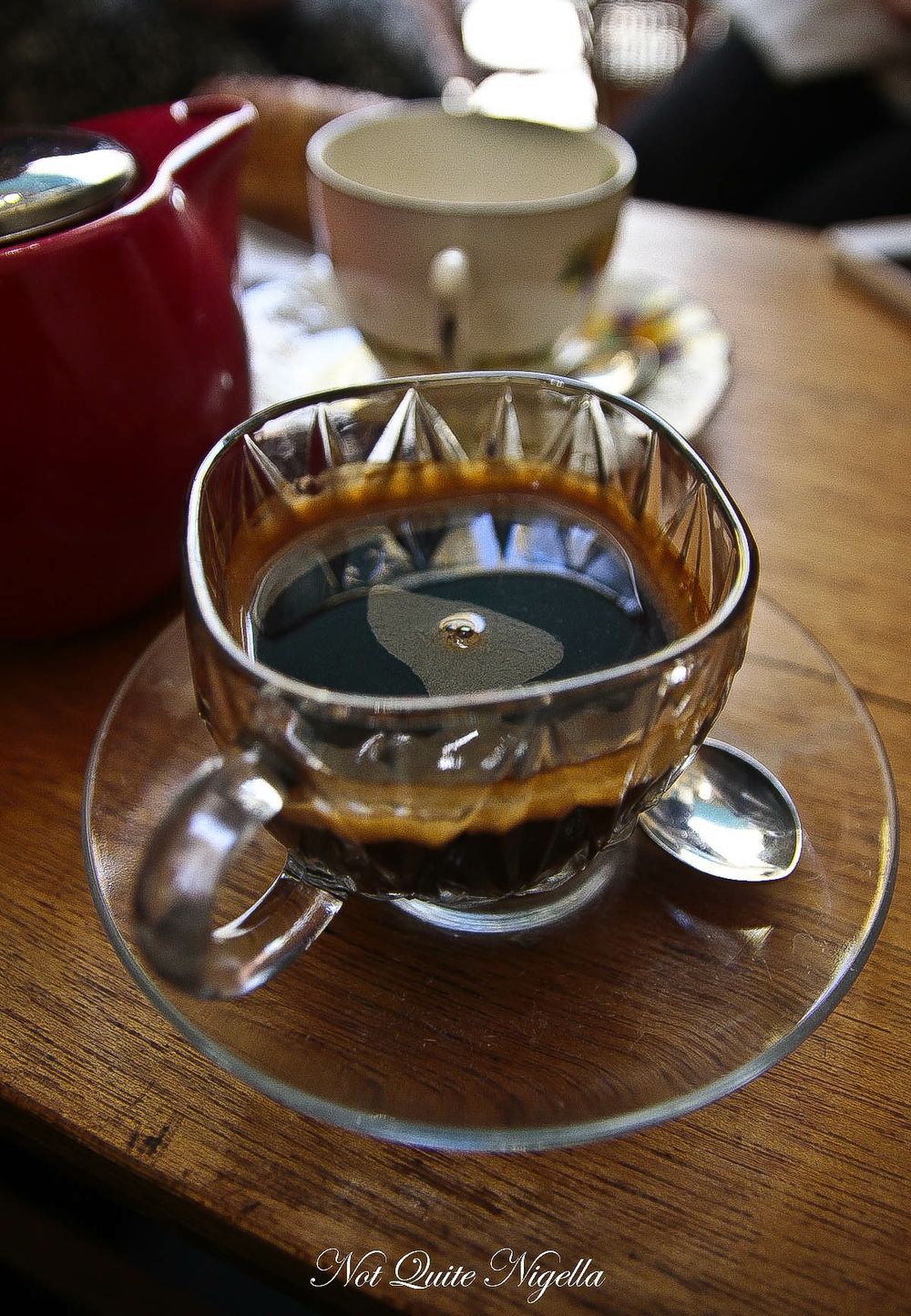 The queue came in waves and shortly after we sat back down, half a dozen people came in queued and this pattern repeated itself throughout the afternoon. Most patrons seemed to buy the bread to take away and we watched as they slipped a pretzel or roll into a brown paper bag or slid a slender L'ancienne baguette out of the basket. 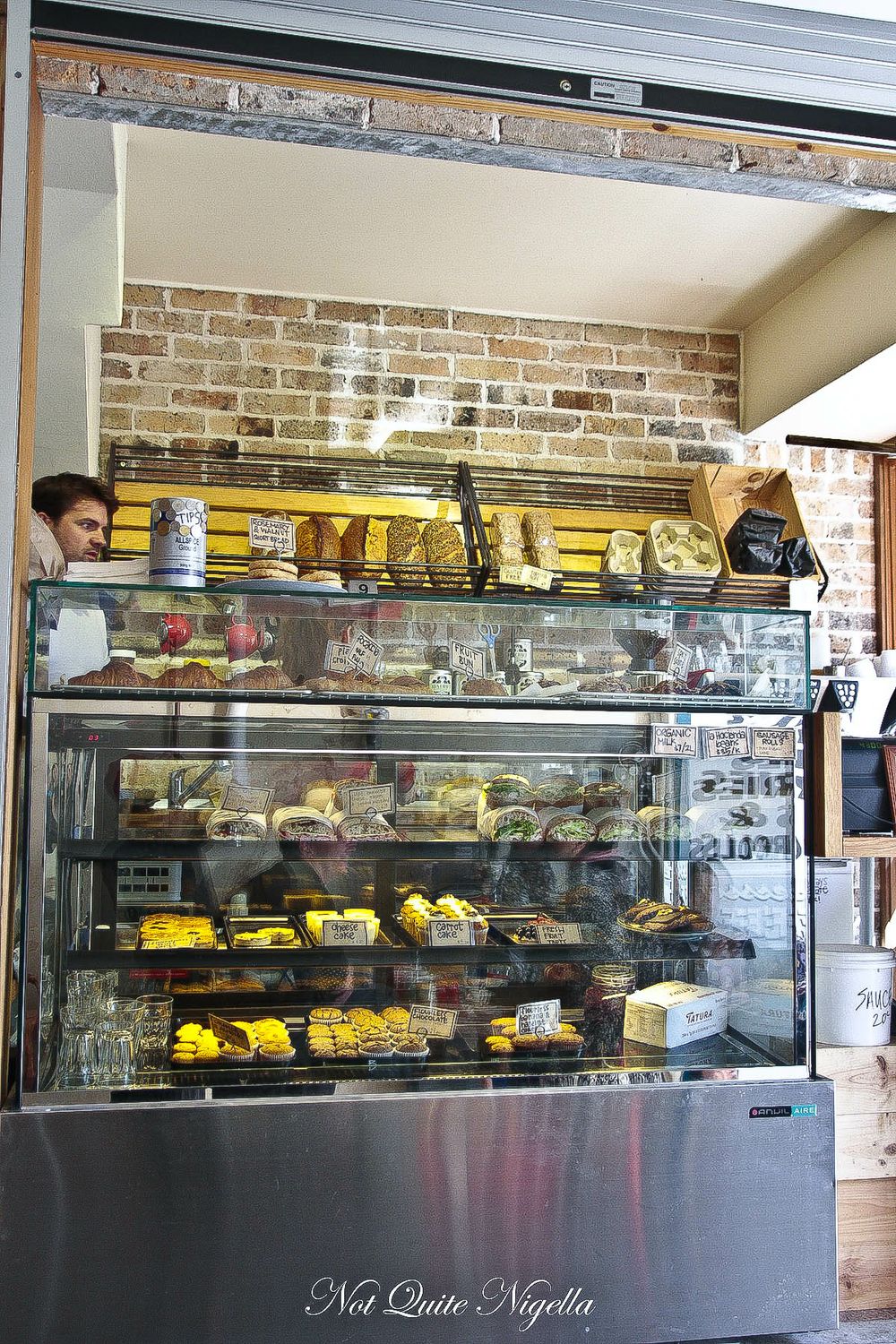 We went for a bit of everything starting with the sandwiches of which there are four sandwiches on offer. There was a chicken one, a tuna one, a ham one and a vegetarian cheese sandwich. I chose the ham and the chicken one as well as a pork and veal sausage roll and half a focaccia and Silver Fox ordered a blueberry fruit tart for good measure.  Unfortunately, we noticed a little too late the weekend only Black Russian toast and by the time we asked, they've sold out. They asked us if we would like our goodies warmed and we happily accepted. A short time later the food arrived and we did our best to fit it all on our tiny table. 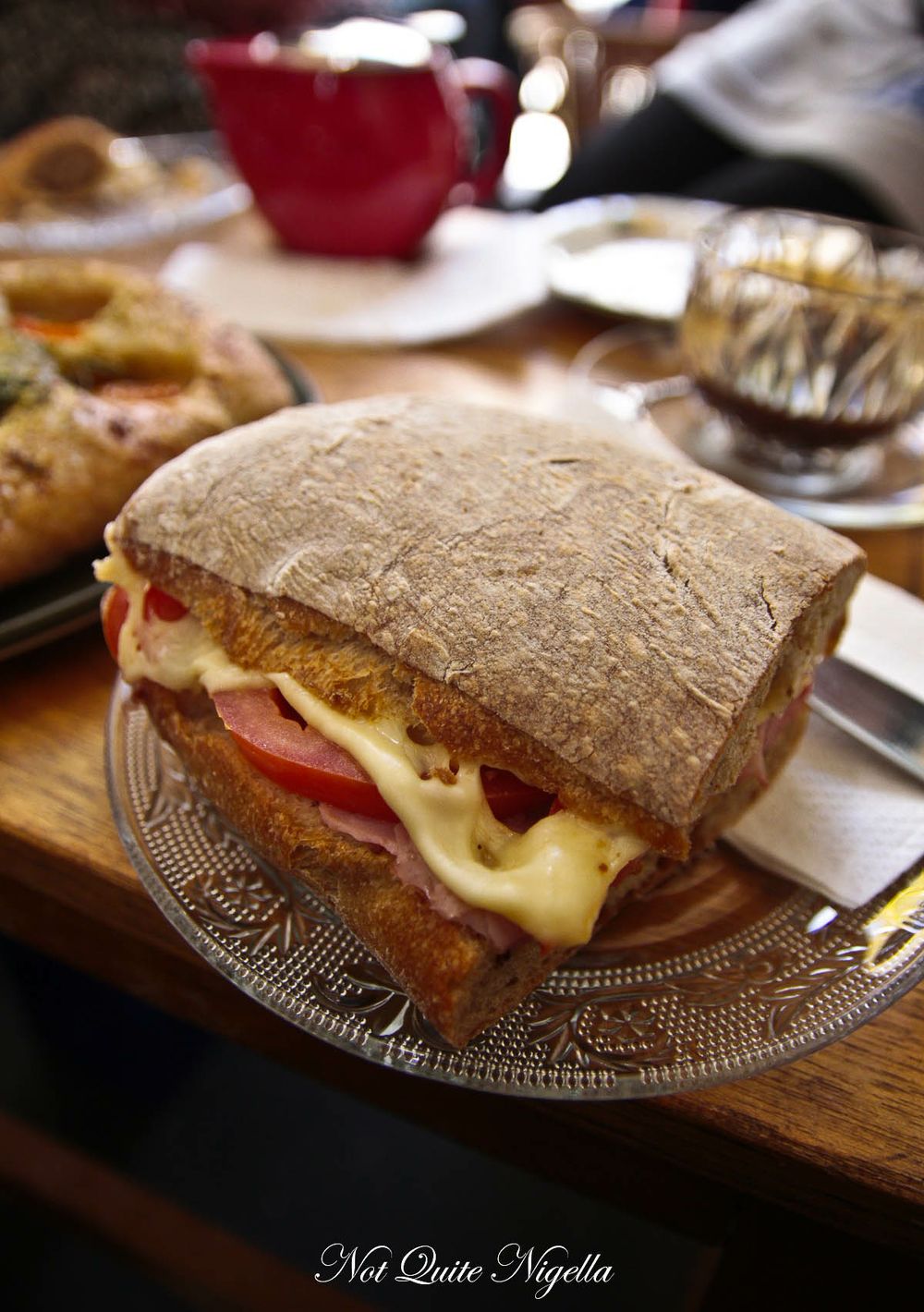 First things first, the bread. It's excellent bread, even for the bread opinionated like Buxom Wench. The wholemeal organic flour is by Laucke the bags seen in the bakery and are apparently a recent switch. The resulting bread was light, fresh, springy and full of flavour. The ham, tomato and cheese sandwich had a good amount of filling to bread and we eagerly finished this. 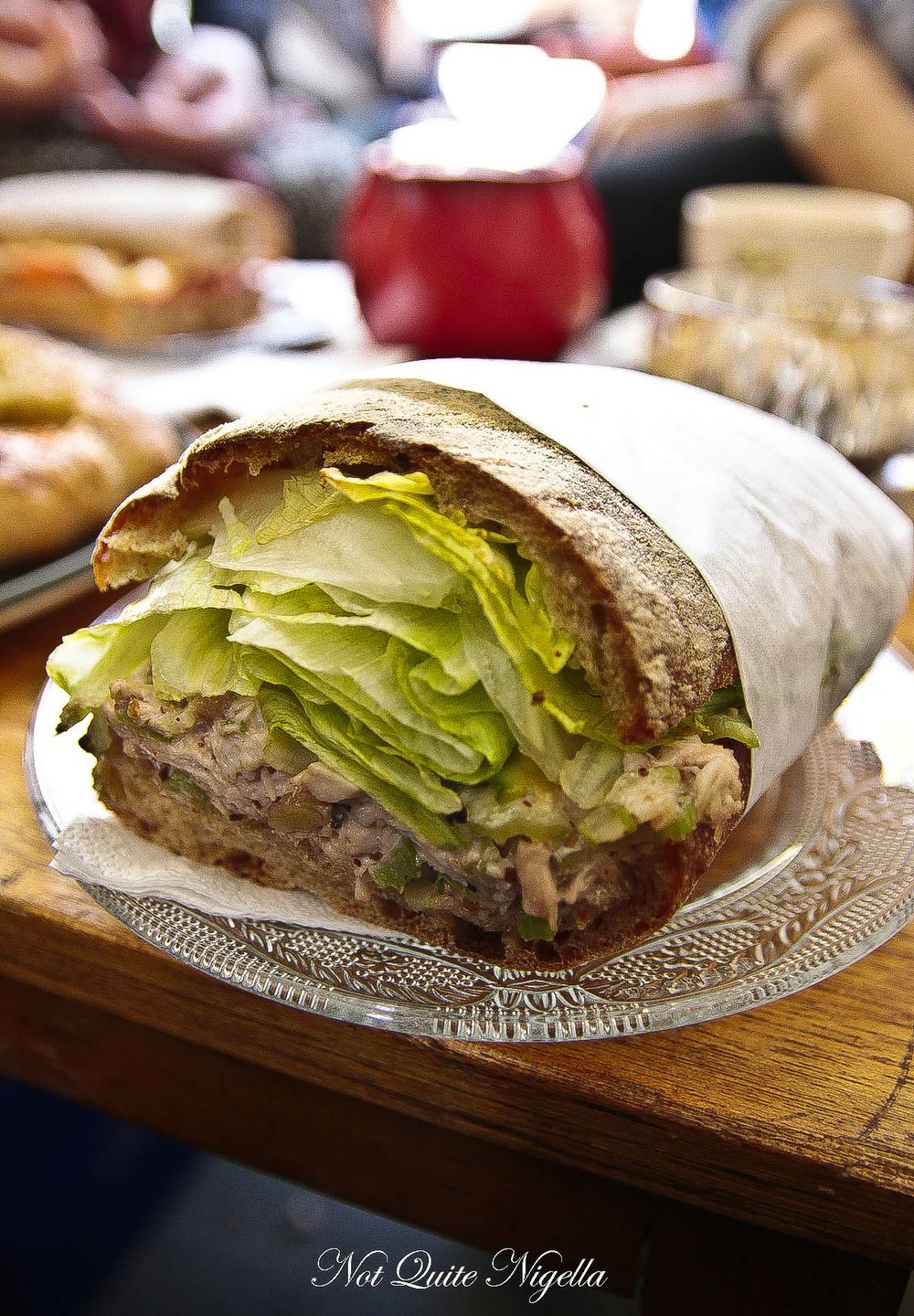 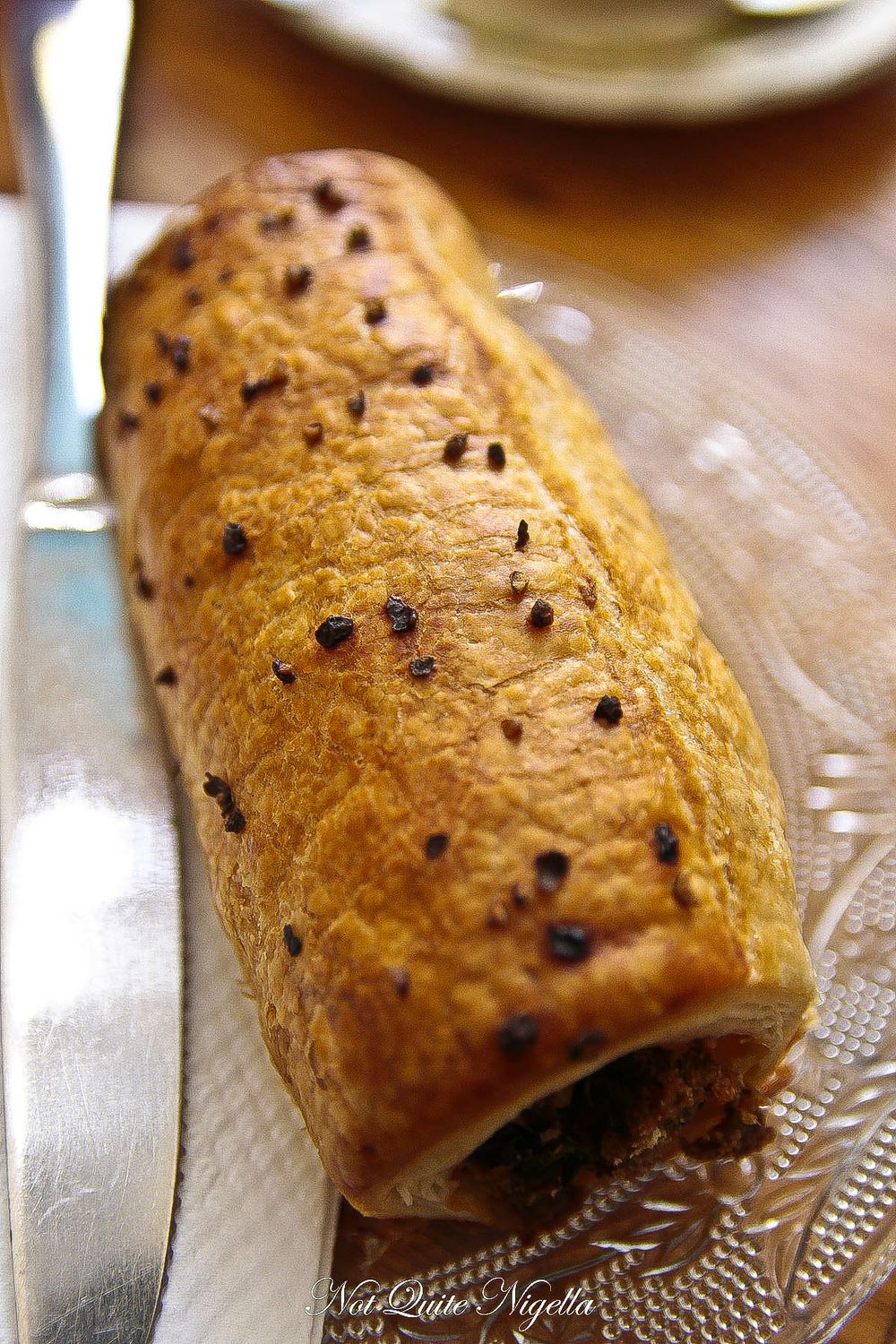 We all love a good sausage roll (I spent the day before baking sixteen of the pastries for Mr NQN as I was going away) and the pork and veal one was a beauty. With an almost Asian taste to it, I could see that there were fennel seeds which had a mild anise flavour but there's a strong savoury taste like star anise in it that went so well with the pork. We didn't get sauce with it and I quite liked it on its own. 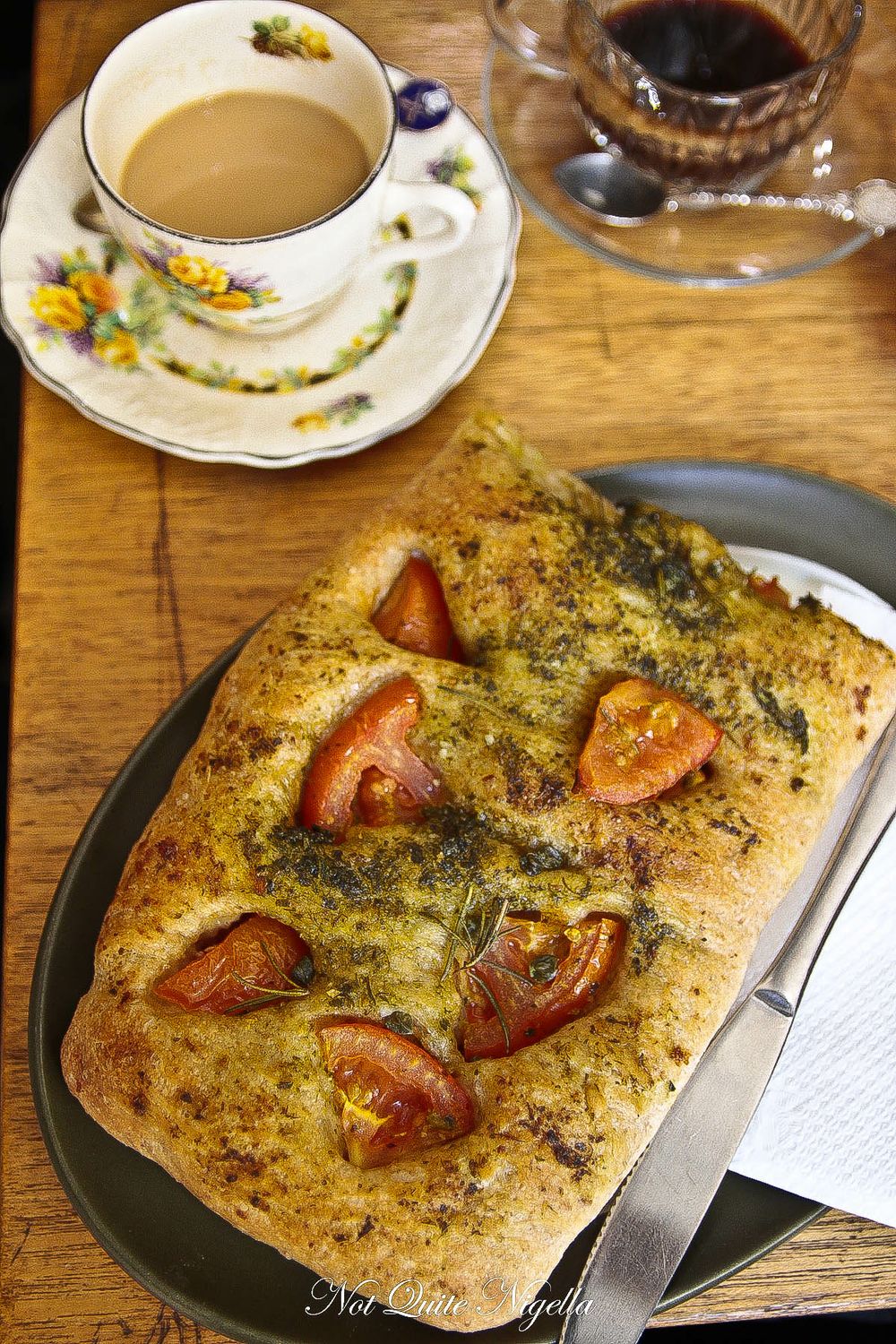 When they brought this out I had to check that this was the half focaccia because it was large. It ended up being one of my favourite items and it was served warm the texture so light and chewy. The focaccia was spread with pesto, tomato pieces and rosemary baked on top.

The blueberry tart had a very crisp, thin shell and it was filled with a slightly tart creamy filling not unlike quark or creme fraiche and topped with blueberries. It's not a very sweet tart but it was good and I particularly liked how the shell stayed so crisp with the creamy centre. 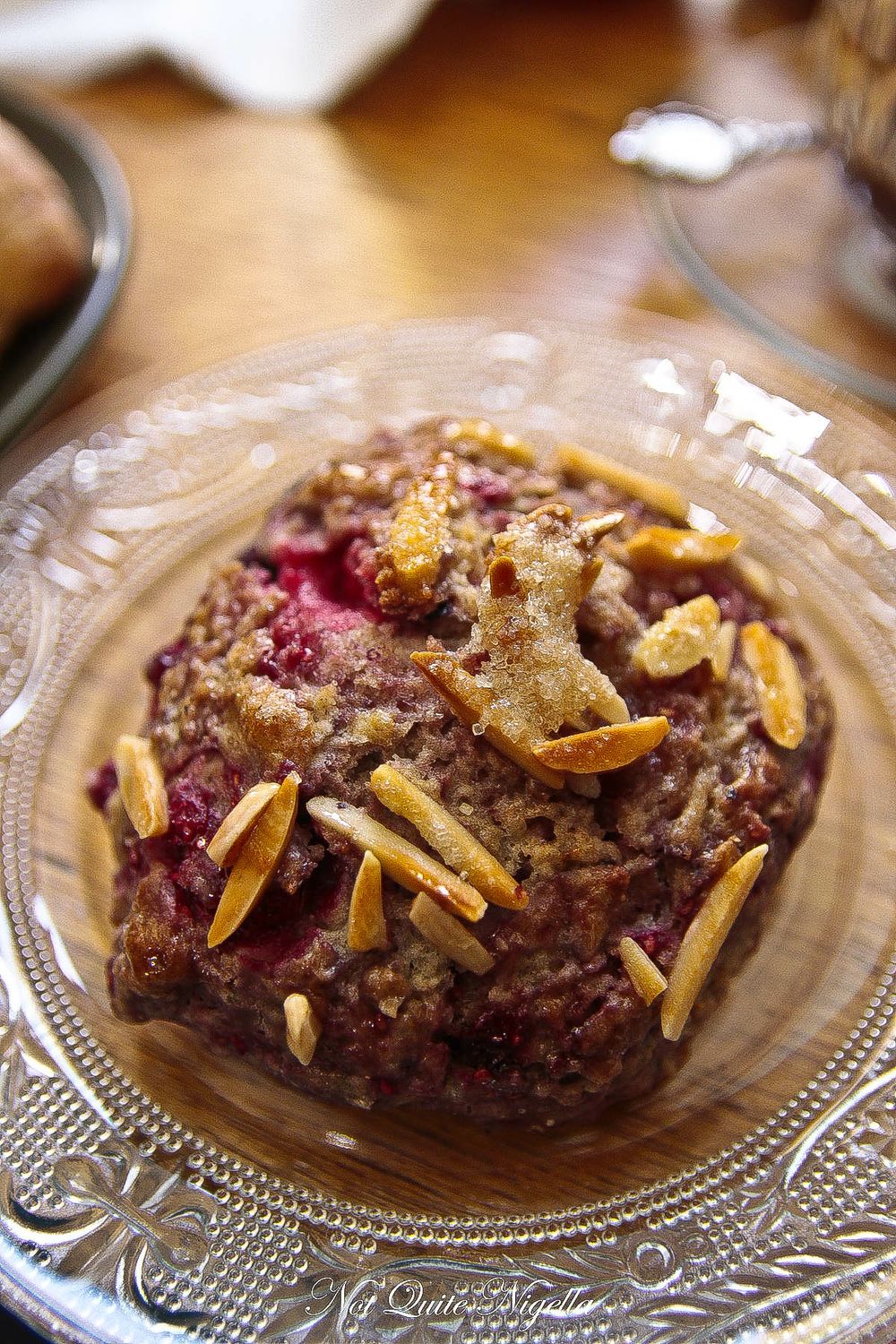 Silver Fox has a sweet tooth so he wandered back up to the counter during a lull in the queue and bought one of these fruit and almond scones. Like the bread it has a great flavour and it was wonderfully fresh with moistness from the fruit. 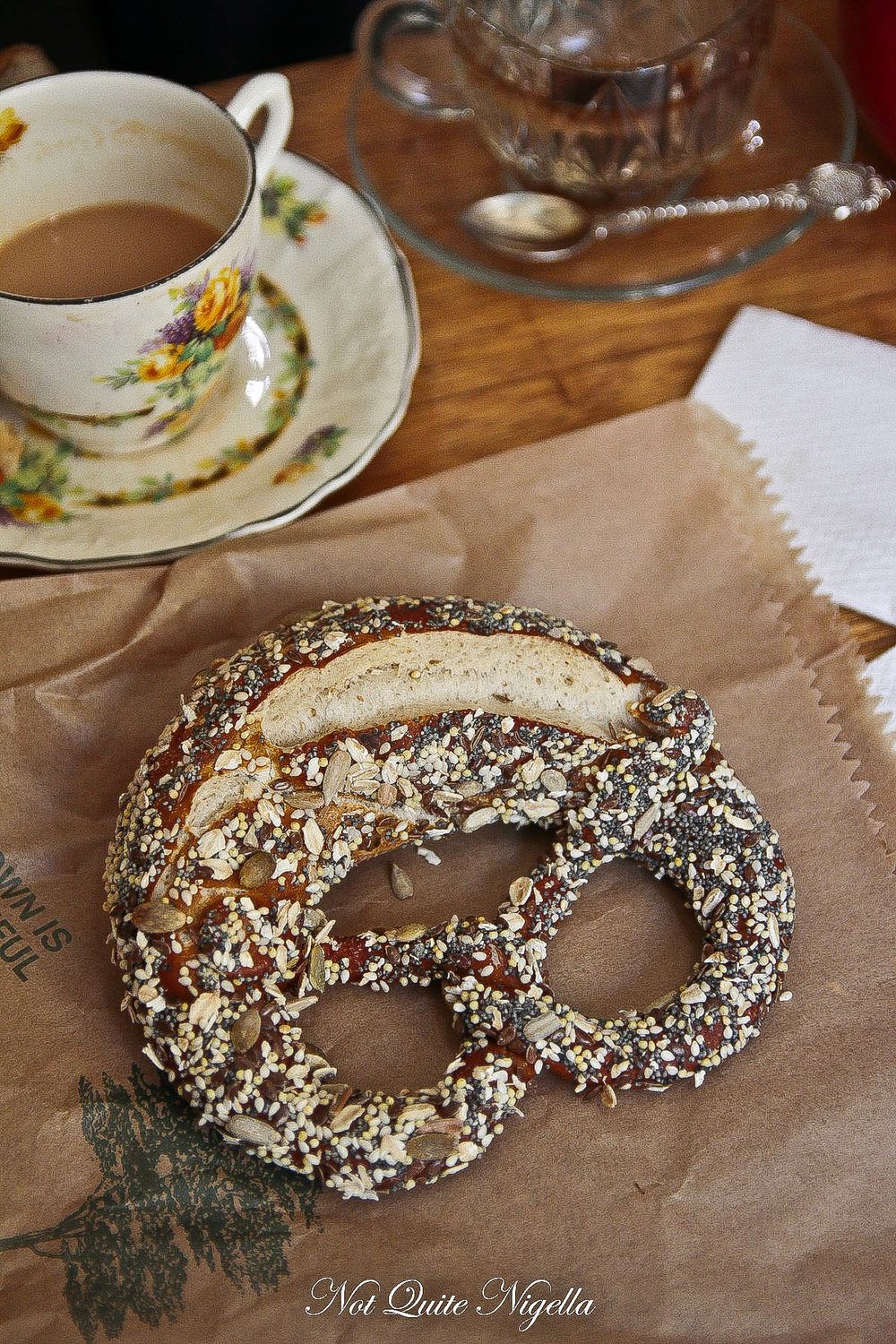 I've had a few pretzels and they range from sturdy and chewy to these which were really quite light and spongey. The baker Andreas Rost is from Germany where pretzels are so common and these were generously studded on top with seeds. It wasn't as dense and heavy as I've had but that makes it quite appealing for those that like lighter breads and pretzels. 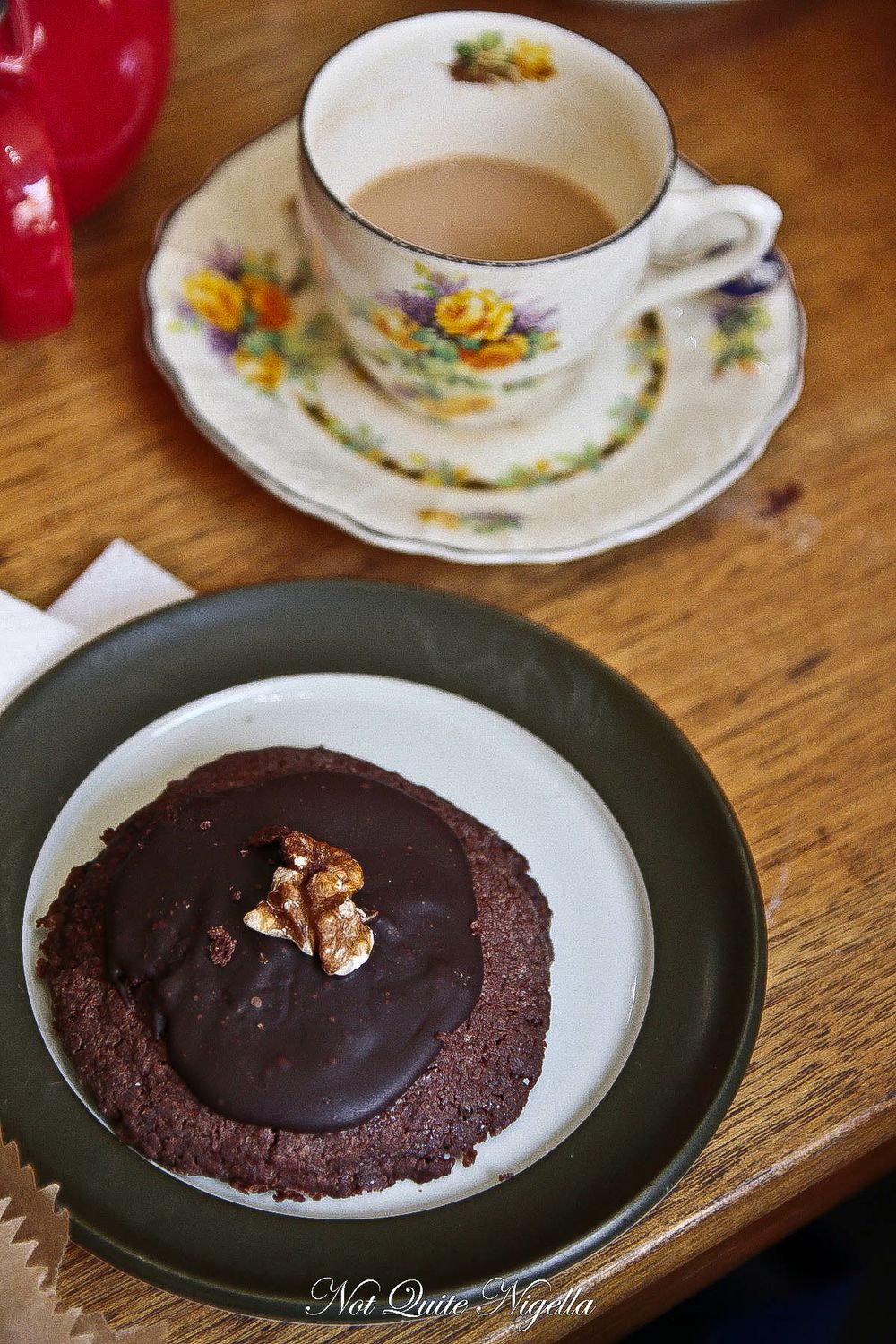 I'm afraid that I don't remember the exact prices for the cookies but I think it was about $3-$4. Afghan biscuits are distinctly New Zealand biscuits that are deliciously crunchy and unlike most other biscuits. The secret to them is using cornflakes or feulletine in them to give them a crunch. These weren't bad but I found them less crunchy than the ones that I've made before. 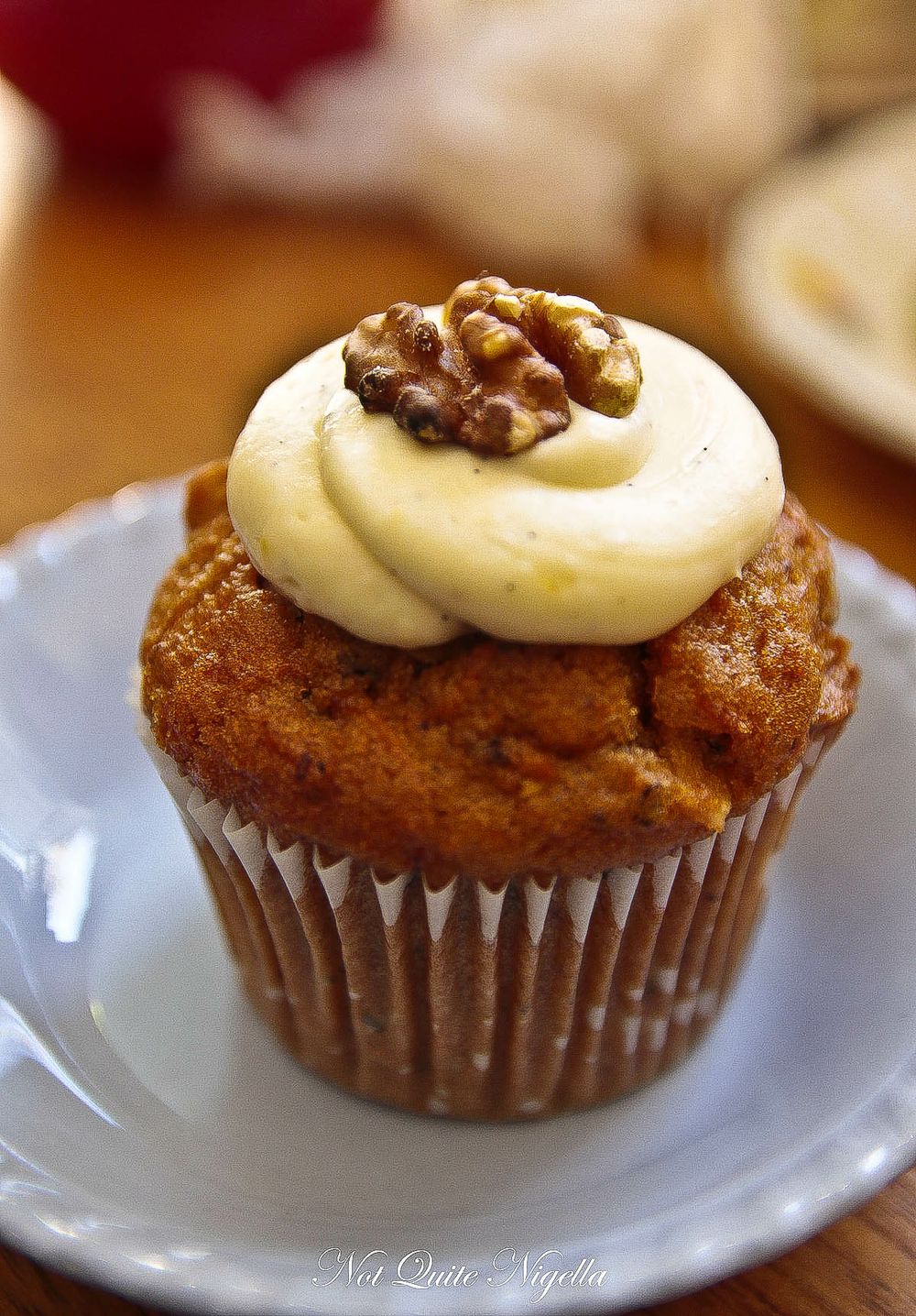 One last sweetie for the road and it was a small cupcake sized carrot cake. The cake was chilled, moist and aromatic and topped with a swirled dollop of lemony cream cheese icing. During this carb fest we hadn't even noticed that we had been way over an hour and it was with some reluctance that we returned to our cars, me holding a loaf of white sourdough for the road. 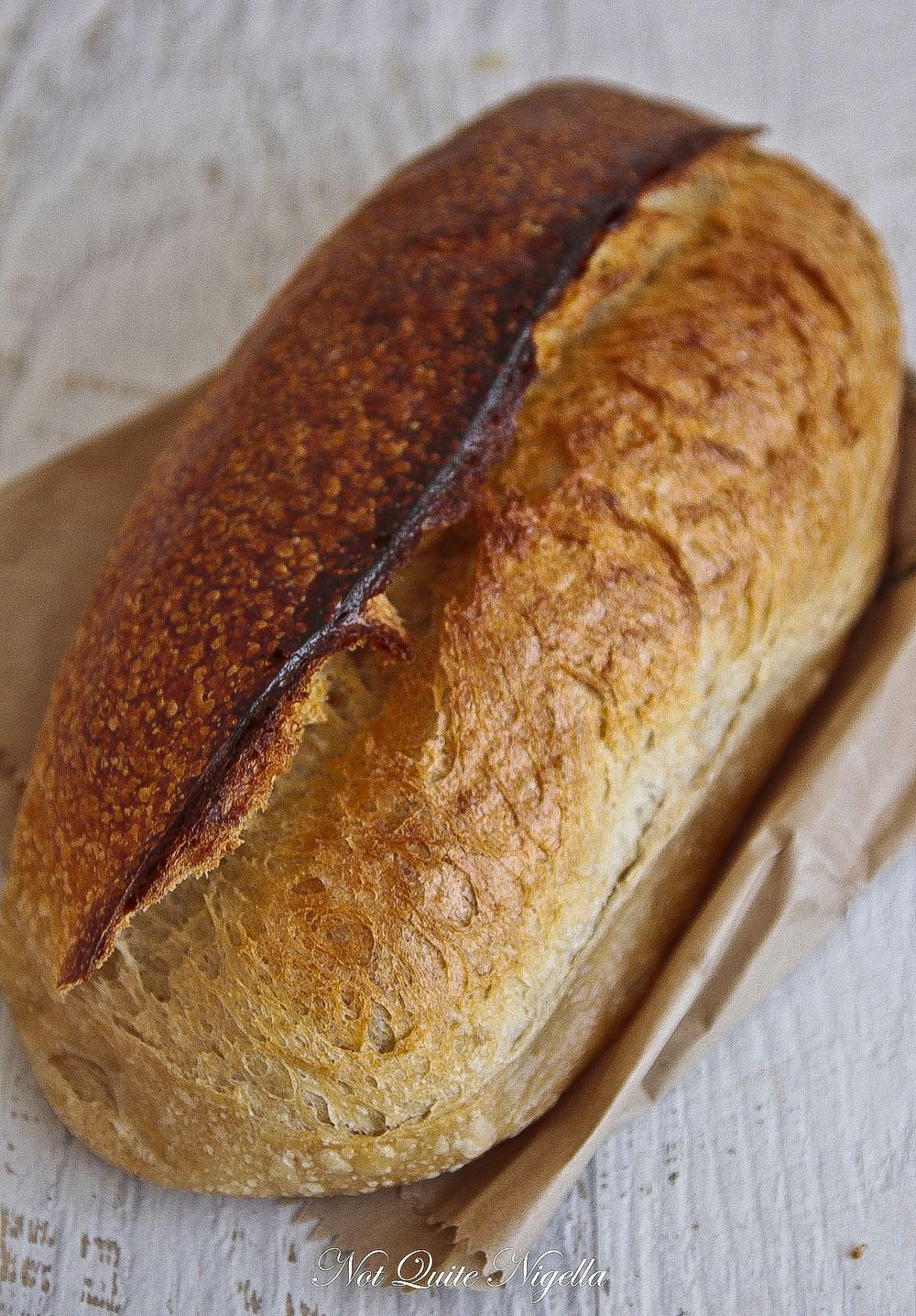 So tell me Dear Reader, are you fussy about your bread? What's your favourite type of bread?