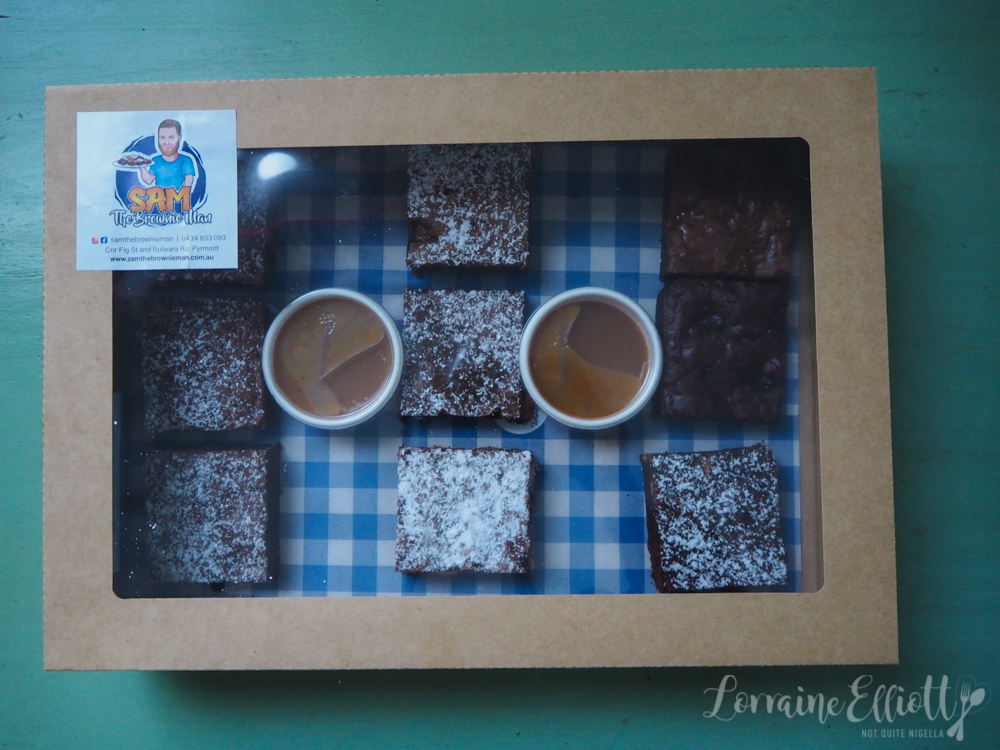 "Corner, edge or middle?" These are important questions for brownie lovers. Personally I'm a middle gal as brownies are all about a fudgy texture, otherwise they're just chocolate cake. Another person that enjoys a fudgy brownie is Sam Strudwick-Day or Sam the Brownie Man who sells deliciously rich brownies in a range of flavours. 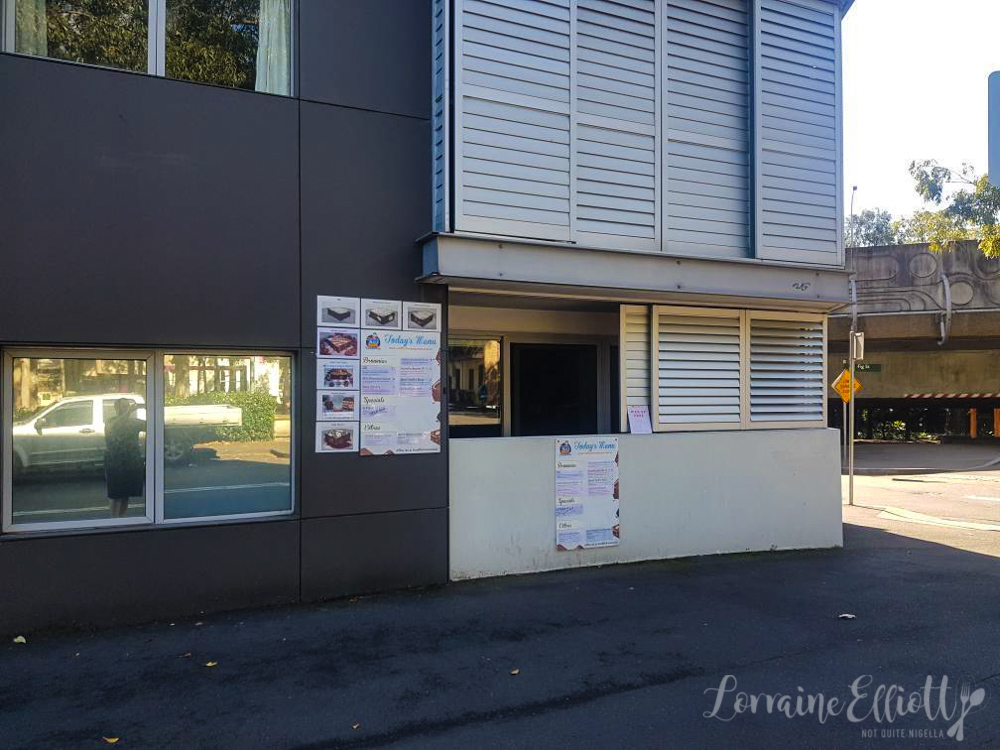 A week or so ago I got a message from Dear Reader Anna. She had just picked up some brownies from Sam The Brownie Man and loved them so much she messaged me urging me to try them. She herself had been tipped off about Sam's brownies by a friend of hers. Prior to opening Sam The Brownie Man, Sam was a government economist mainly working in international relations. His job entailed providing economic aid (knowledge, training and capacity building) to South East Asia. 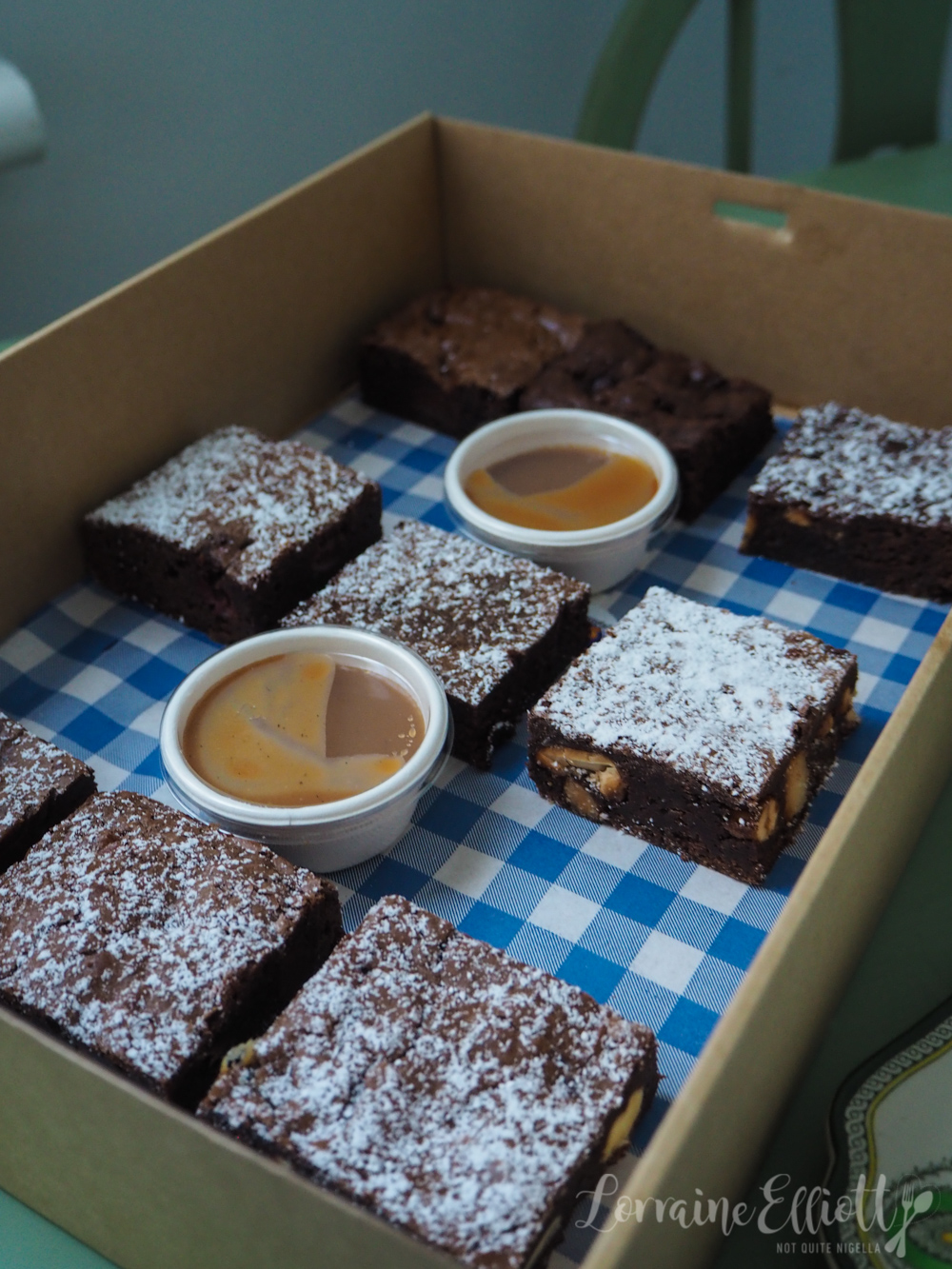 COVID, work disillusionment and the breakdown of his six year relationship were the impetuses for starting the business. Sam says, "Everyone has had a rough two years and I’m no exception...It was really hard being alone all the time in a tiny apartment. It made me think about where I want to live, and brought me to the realisation that as a single millennial from a family with no real wealth, home ownership, sadly, is probably out of reach for me in Sydney. The only saving grace from this realisation was that I could look at this as kind of liberating – if home ownership was unattainable, how much money did I really need to earn? If my job wasn’t bringing me the joy I needed, what could I do instead to bring more joy into my life?" 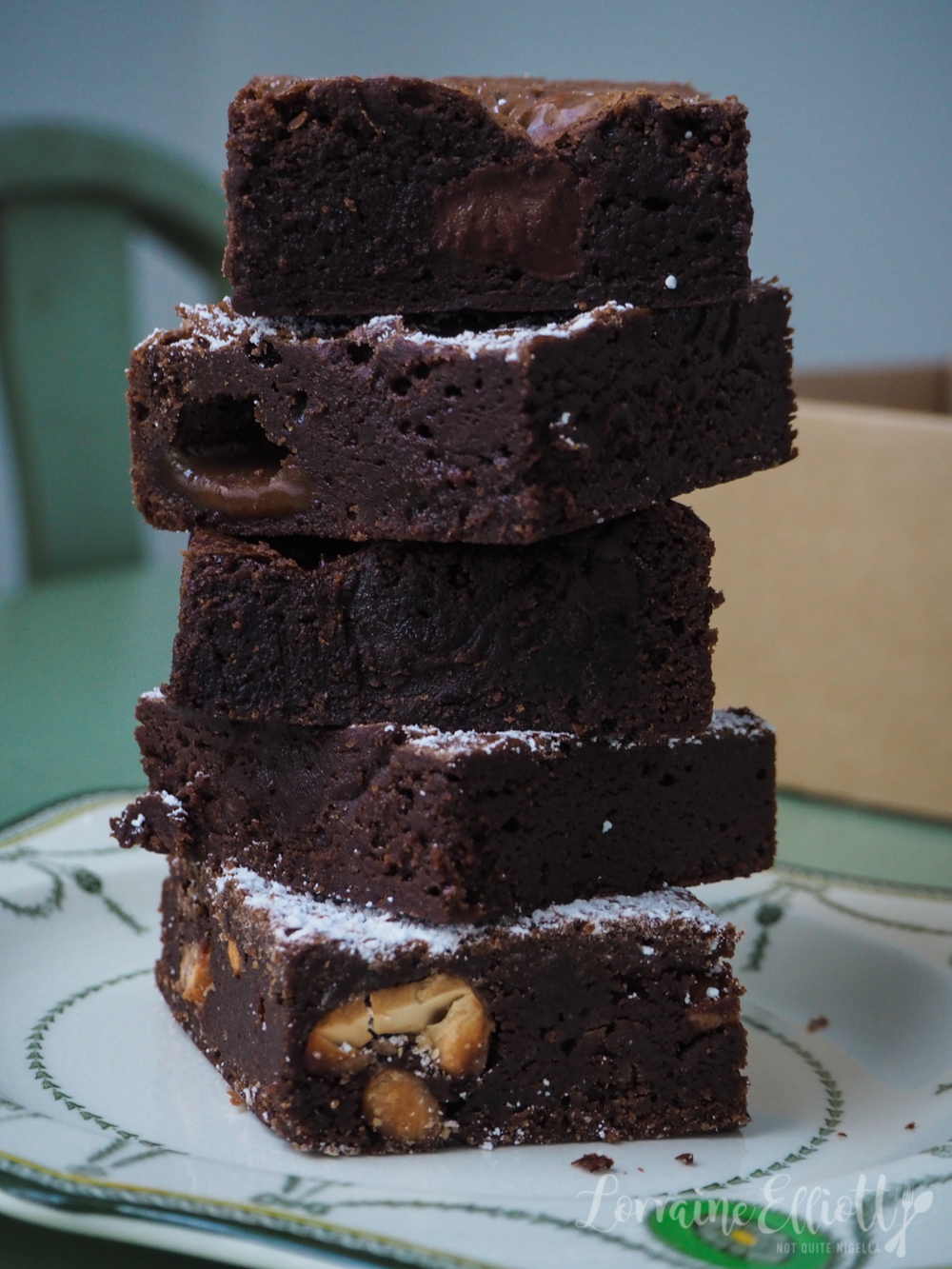 "Being locked down at home highlighted how unique my apartment is. It’s on the ground floor, with a public facing courtyard, opposite a wonderful community park. I got to see the amount of foot traffic that went by my house, and I slowly convinced myself that maybe I could start a business here selling food. I decided that if I’m going to sell food directly to the public from my apartment, dessert was “less weird”!" explains Sam. He wanted to specialise in one item and cupcakes and donuts were already taken so he decided to become a premium brownie baker. In December 2021 he asked for long term leave from his employer and became a full time brownie baker. 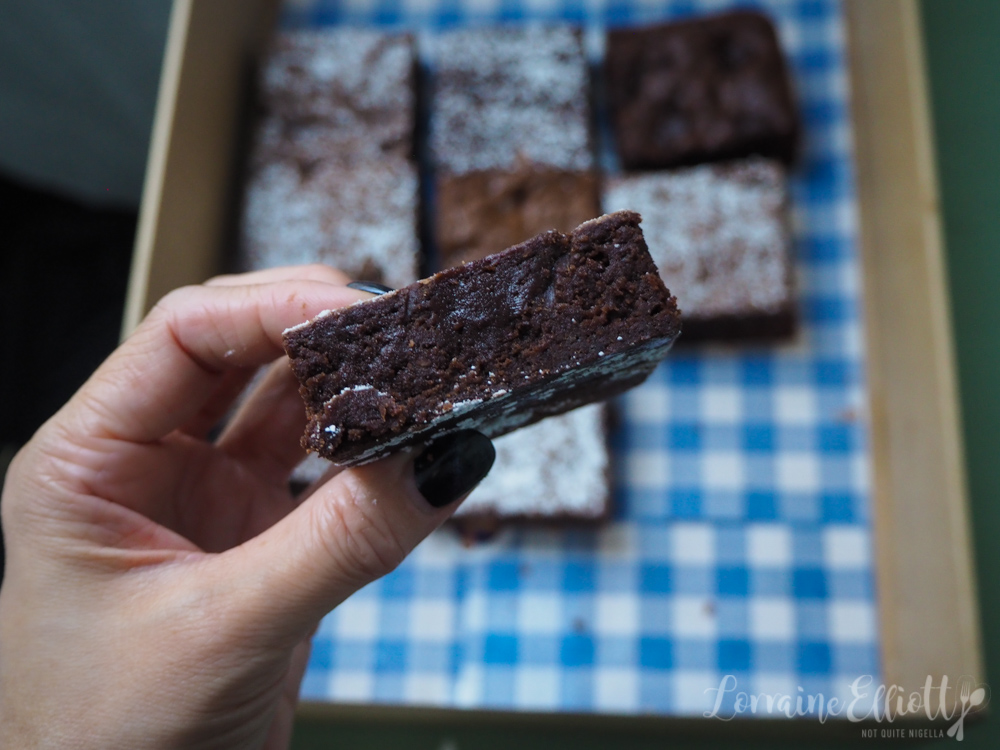 Sam's brownies come in a variety of fillings from OG, Salted Caramel, Sour Cherry, New York's Nuts, Nutella bomb, Milk Chocolate Chunk and White Chocolate Chunk along with 2 vegan selections (regular and Nutella bomb). There are usually 4-5 varieties available at any one time. Sam uses Haigh's chocolate, free range eggs and Lurpak butter in this brownies. And when you order he will ask if you want a corner, edge or middle piece because people have definite opinions on what they want. Most brownies are $6 each for a square of brownie. 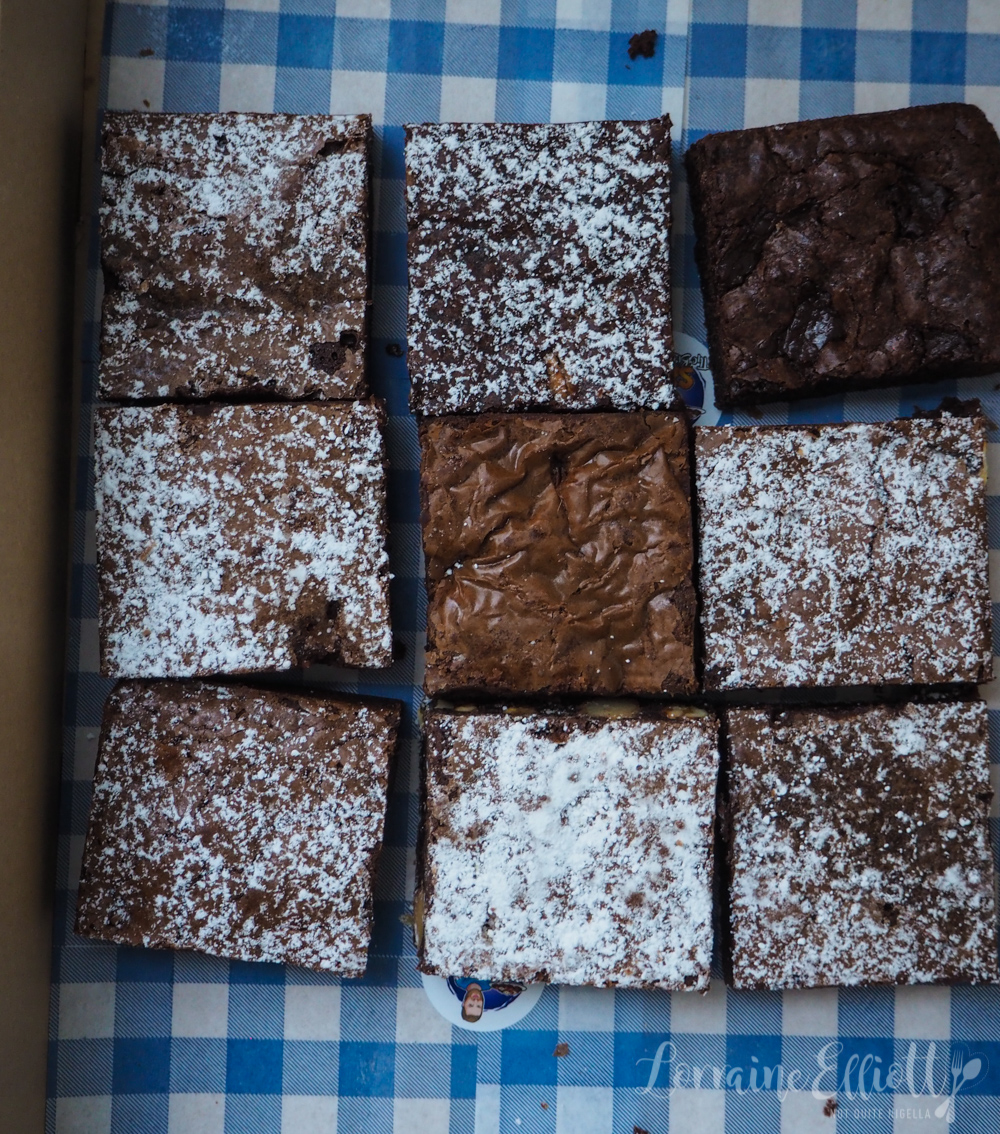 For Sam the perfect brownie has to be three things: chocolatey, fudgy in the middle and crispy on the edges. Sam explains, "You can achieve this in two ways. Firstly, make sure you use quality ingredients. If you have to compromise, make sure you prioritise the fats (i.e. use quality chocolate, butter and/or eggs before getting fancy flour). The second way is ensuring you don’t overcook the brownies." 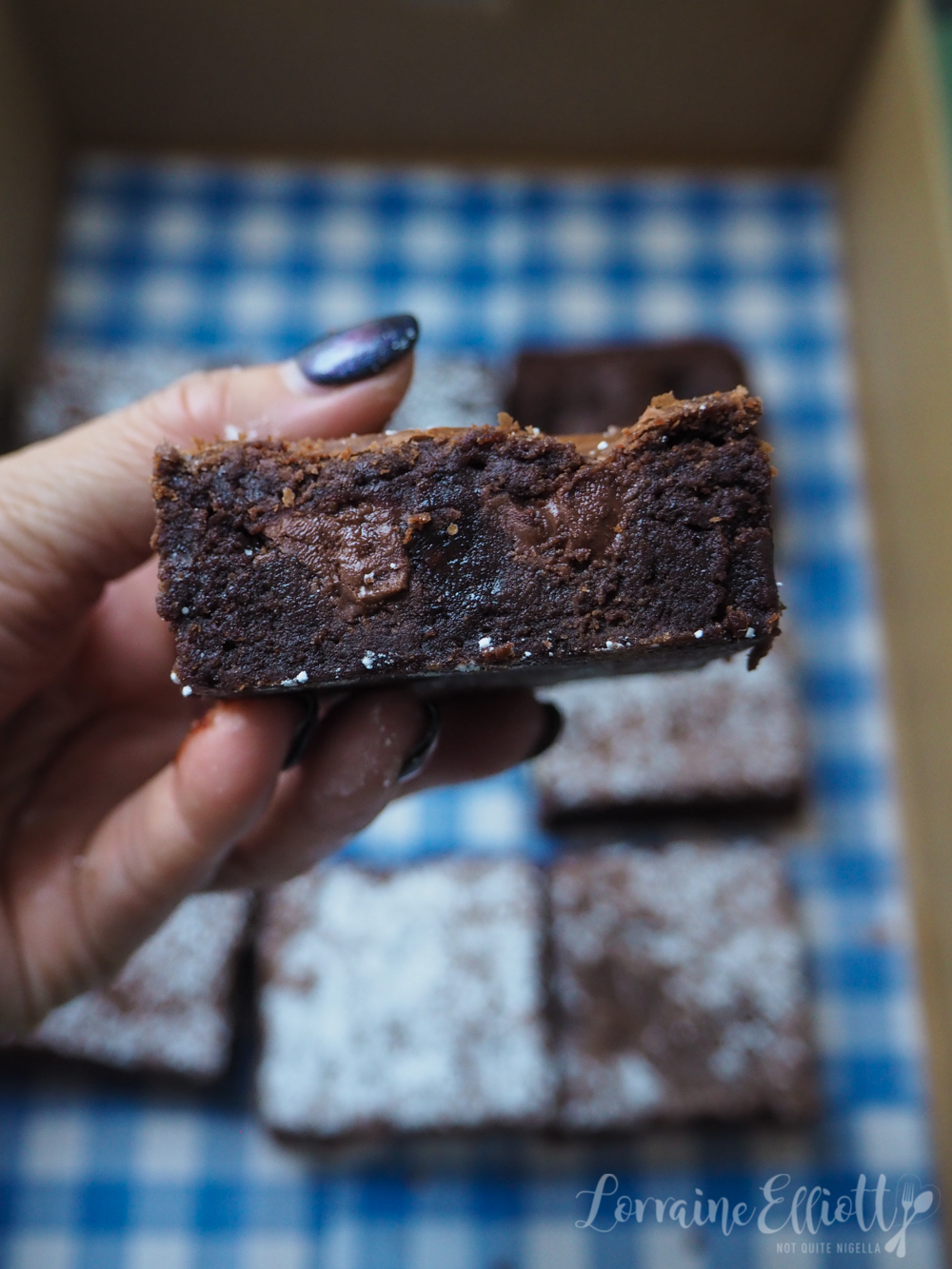 I try a selection of brownies and each has its own distinct flavour. The Nutella bomb is one of my favourites with pockets of Nutella giving it an even more fudgey texture. It is also one of the sweeter brownies although one of the things I like about Sam's brownies is that they are on the whole not overly sugary. 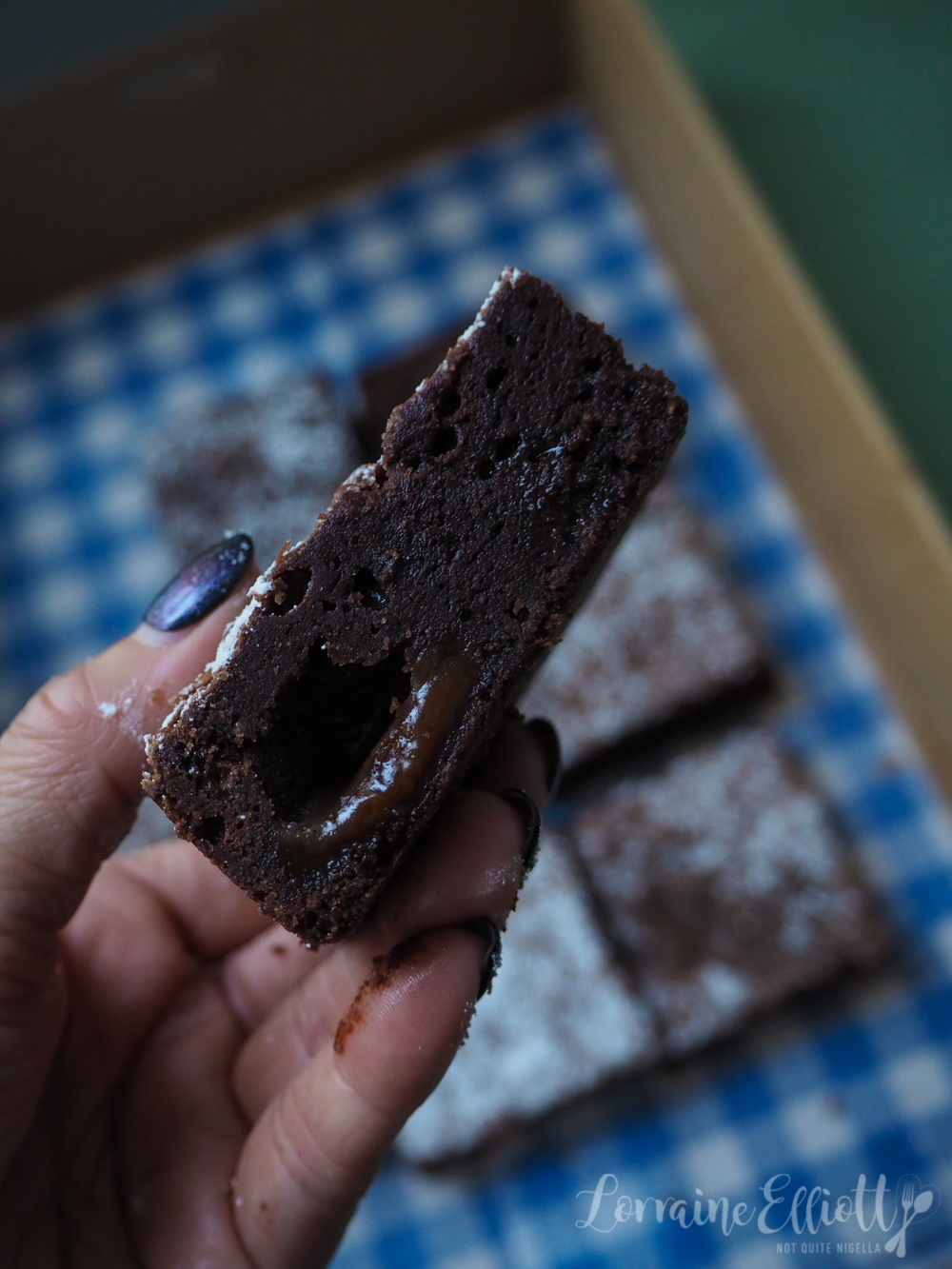 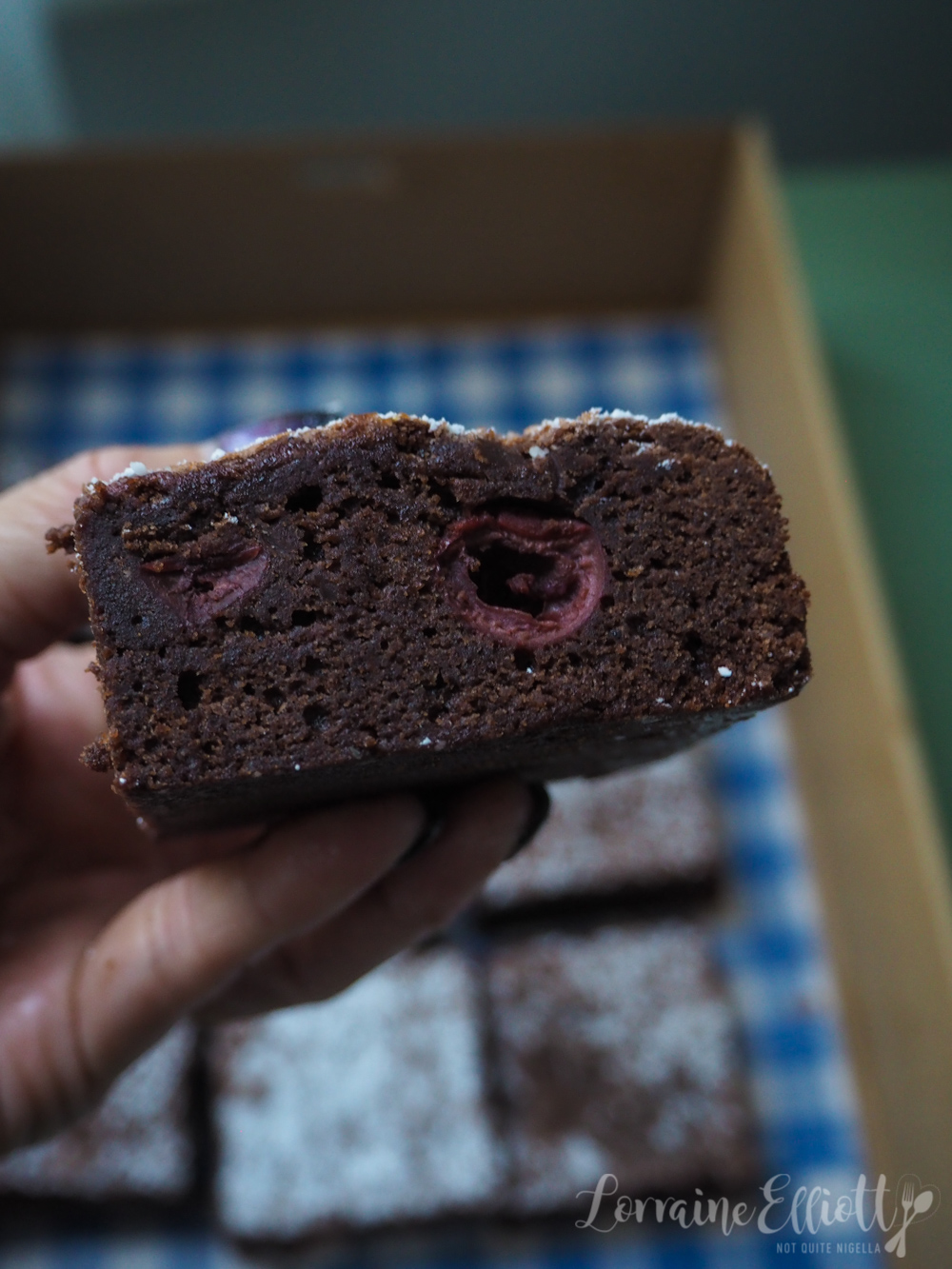 If you're looking for a brownie that is less sweet the sour cherry does the job nicely with a good amount of sour cherries baked in the brownies. He says that ironically it is also his least popular brownie but the one that he gets the most messages about, "Those that do try it rave about it. I definitely have more people contact me to tell me how much they loved the Sour Cherry brownie than I do for any other flavour," says Sam. 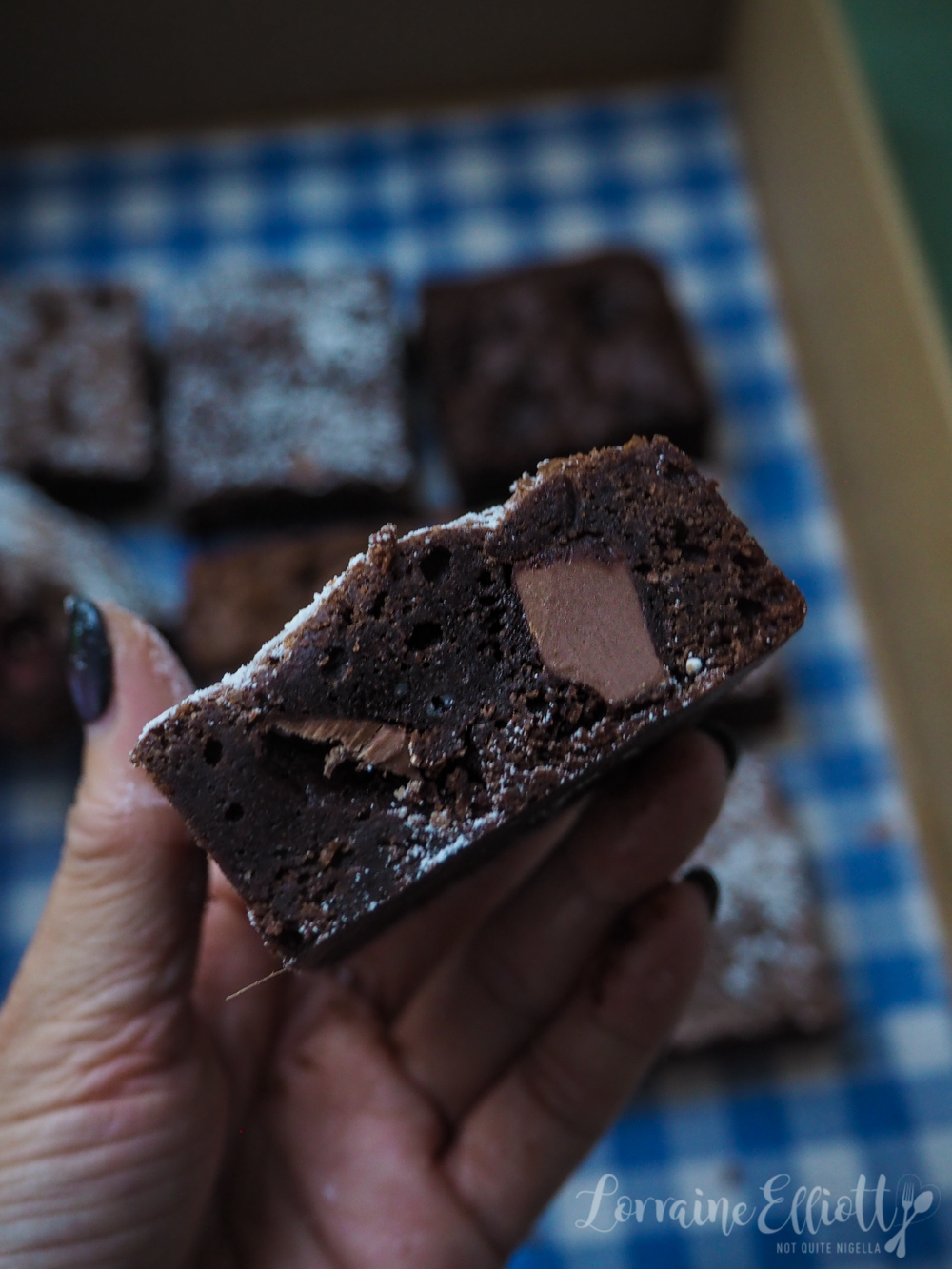 The milk chocolate and white chocolate chunk are also delicious with a nice contrast in texture when you get a bite of a chunk of chocolate and the vegan ones are rich and tasty too. 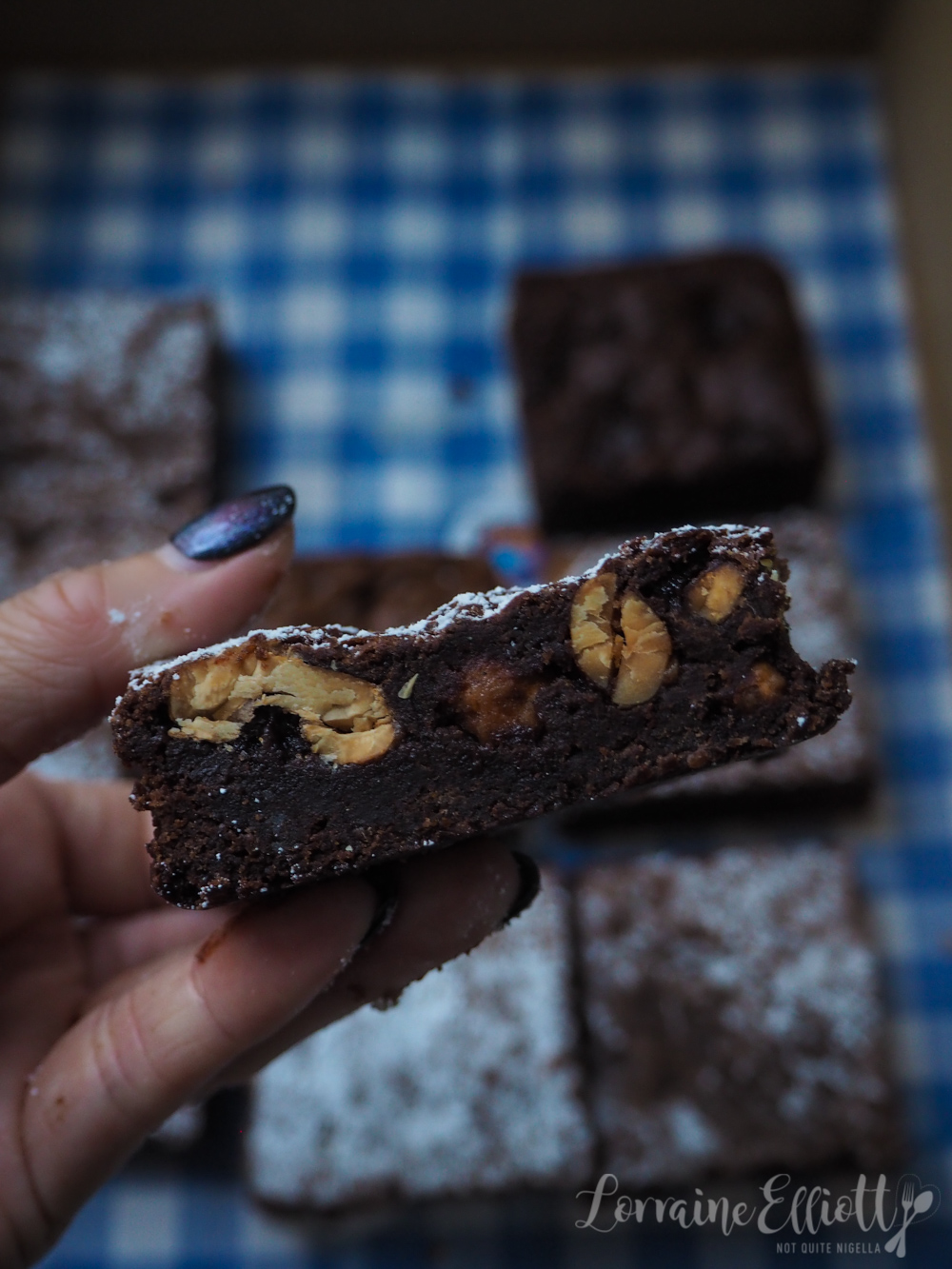 My favourite brownie along with the Nutella bomb is probably the New York Nuts with a generous amount of crunchy hazelnuts and whole macadamias. Sam roasts the nuts himself in sugar and spices in the same fashion as New York street carts. He uses different nuts but the most common combination is peanuts, macadamia nuts and cashews and he also takes nut requests. 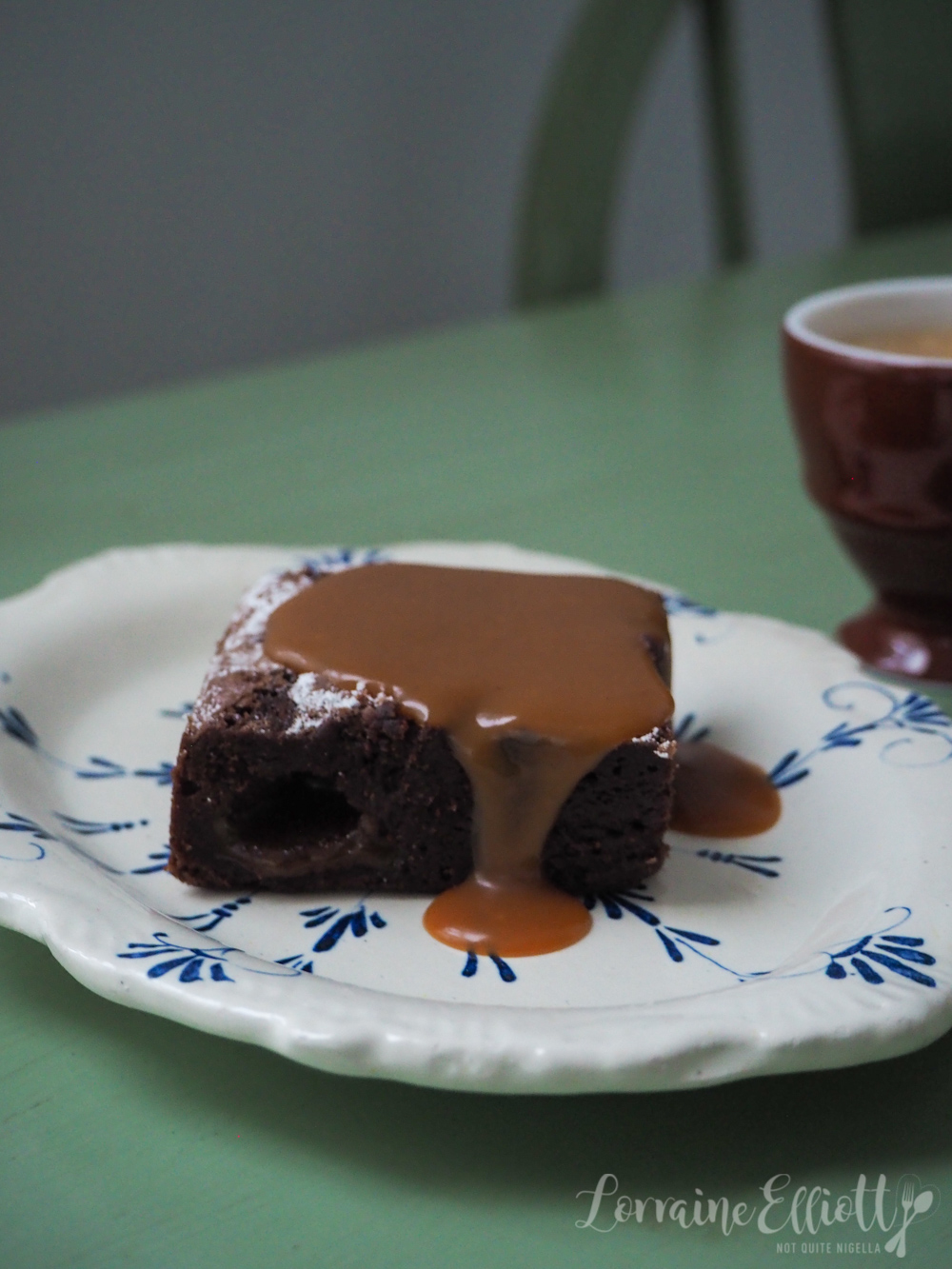 There are a few ways you can order from Sam. You can visit him at his apartment/shop in Pyrmont at the corner of Bulwara Rd and Fig Street where he is open every day from midday until 8:00pm. Sam also welcomes chats about the flavours he has on the day via Instagram DM and he is quick to respond. "Otherwise, just pop on down to Pyrmont for a brownie and a chat," he says.

So tell me Dear Reader, the important question: are you a middle, edge or corner brownie person and why?

These brownies were independently paid for.