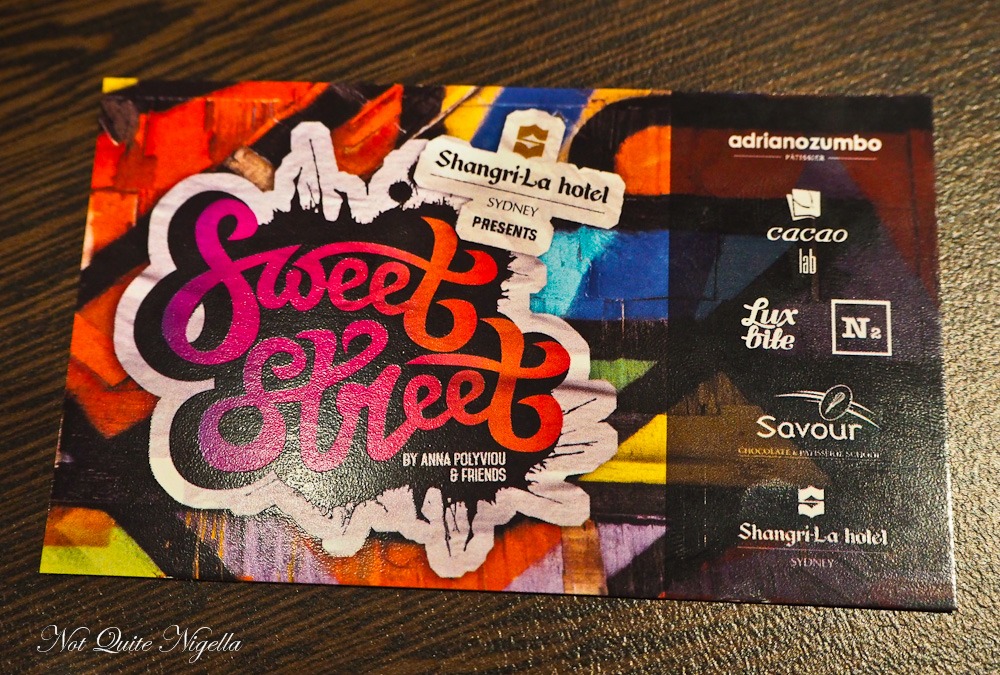 "We're expecting about 500 people," Anna Polyviou says her eyes shining with excitement and perhaps a touch of nervousness. The 34 year old Shangri-la Executive Pastry Chef is used to creating dessert themed events - her monthly collaborations with fellow pastry chefs have become a popular choice for the sweet toothed. But this would be in a different league altogether. 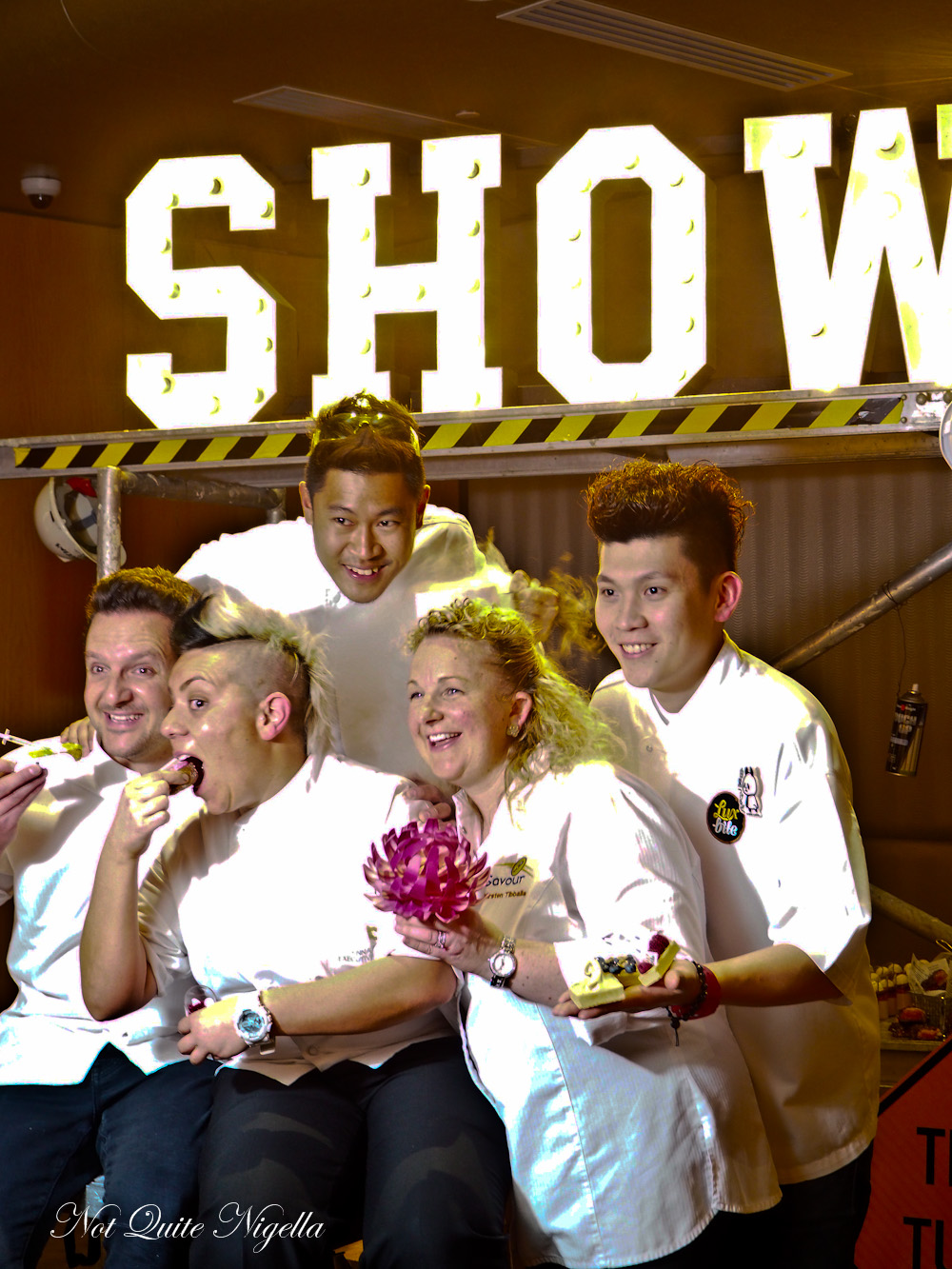 Anna enlisted the help of her patissier friends with Sydney's Adriano Zumbo and Min Chuan Cha from N2 as well as introducing Sydney siders to Melbourne's patissiers Bernard Chu from LuxBite, Kirsten Tibballs from Savour School and Tim Clark from Cacao Lab. 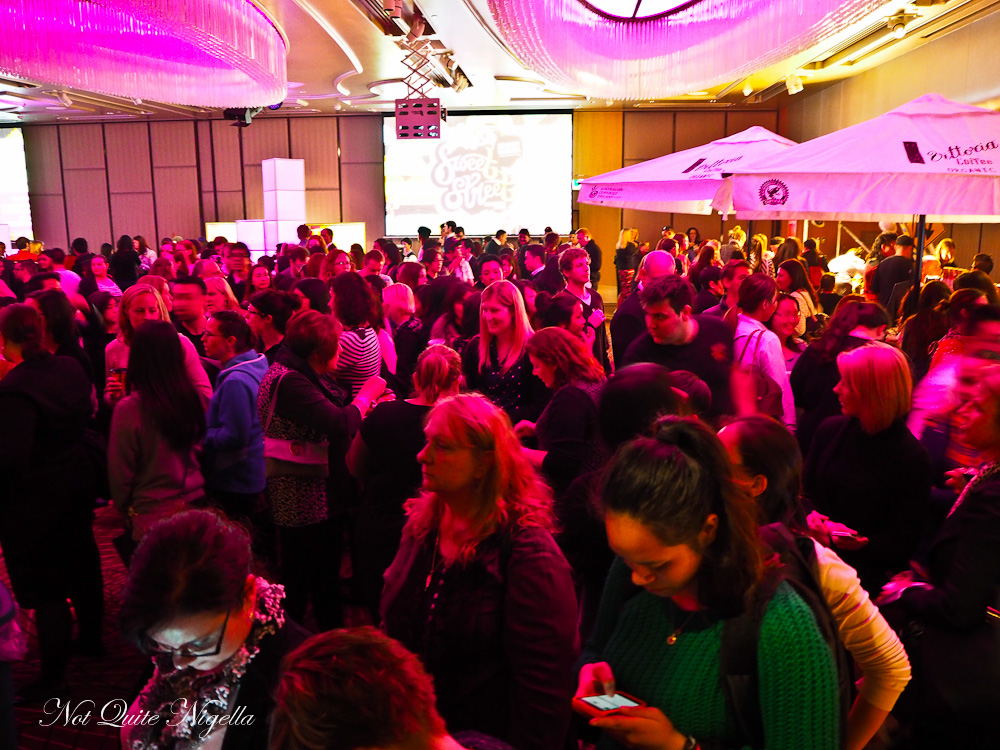 The Shangri-la's ballroom has been transformed for the event. For the $55 entry fee everyone gets a "coffee card" with 10 stamps. Each purchase is generally about one stamp (except the cocktail by Blu bar which is two) and this equates to $5.50 per stamp and item. Extra cards can be purchased for $45. 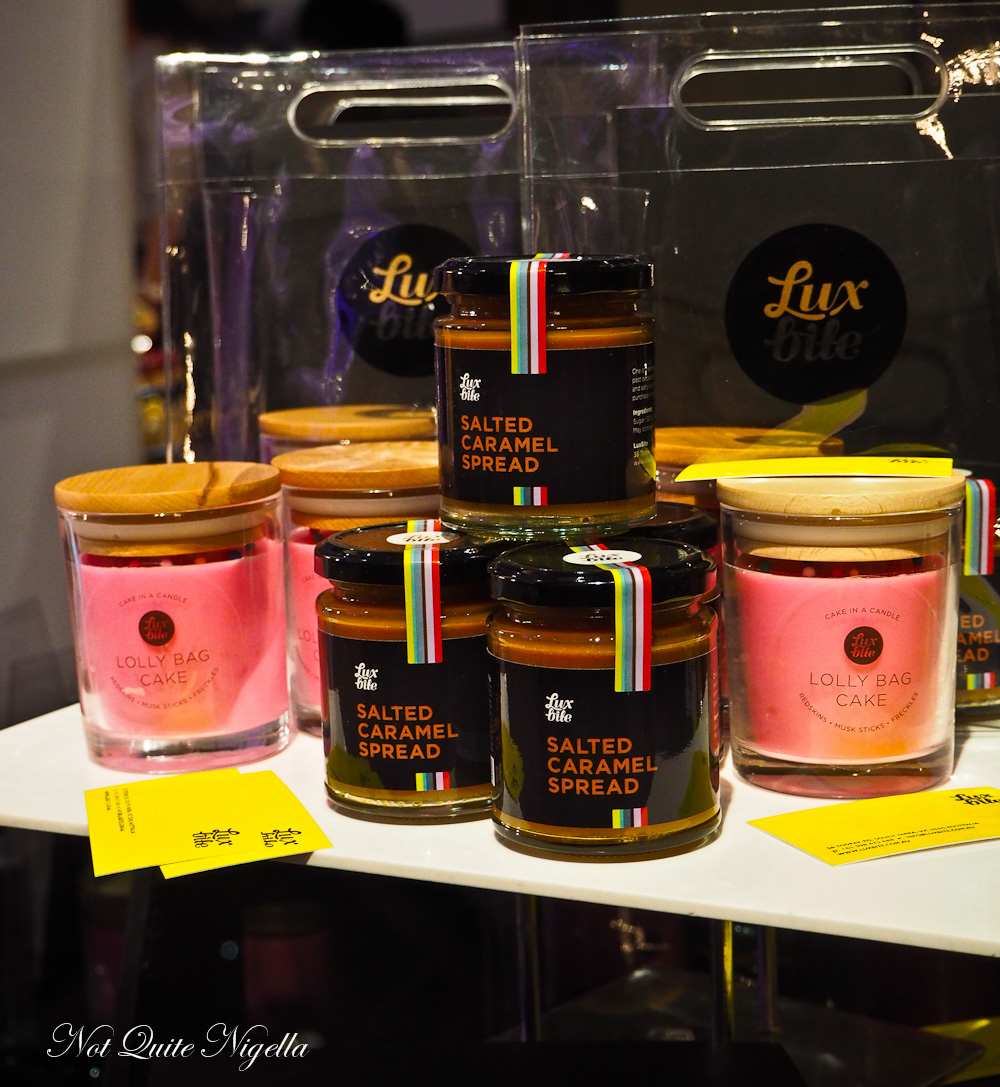 The doors open at 5:30pm and the best tip is to arrive early. I've never seen anything like it. Over 500 people in one pink tinted ballroom eagerly queuing for sweets. It's like a dance party for sugared up adults. Queues stretch for metres and the waits are long at some, particularly the savoury stand and the tail ends of queues merge into others. Still, everyone is in a good mood and they're happy, not just because they've got a bucketload of sugar running through their veins. A DJ plays 90's hits in one corner. 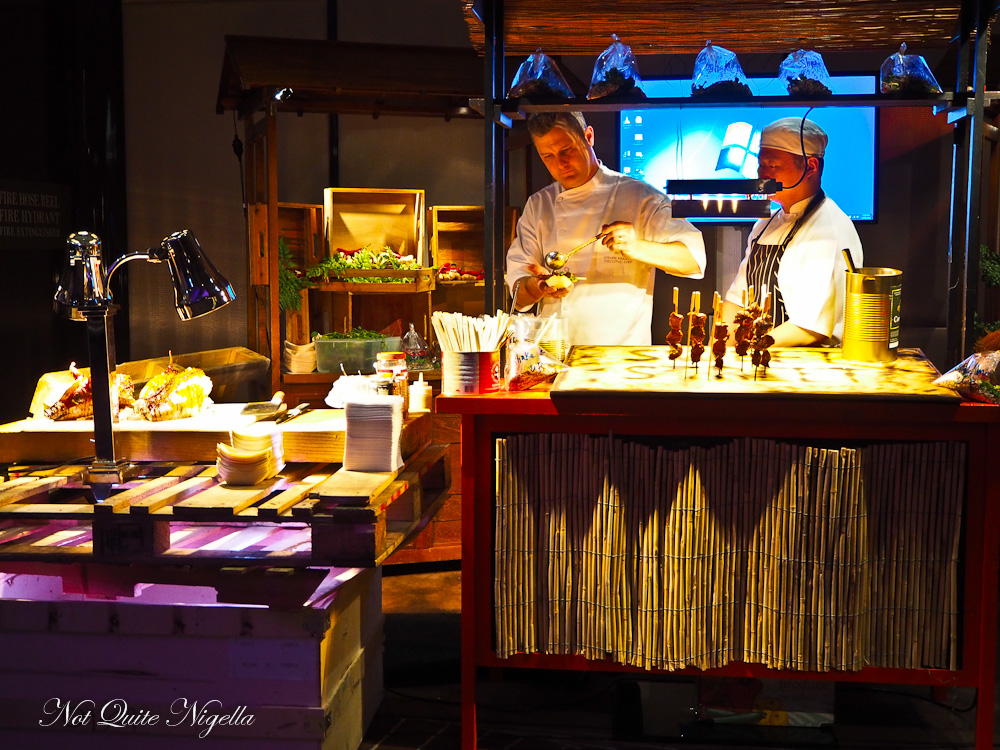 My first stop is at the savoury stand. This is the stand with the longest queue as most people visit it during the night. It is helmed by the Shangri-la's Executive Chef Steven Krasicki who is busy dispensing Asian "street food" in a concept that he is bringing to Cafe Mix in the future. There is a chicken larb and green papaya salad in plastic bags as well as lamb skewers with sous vide lamb given a final blast on the grill and a basting from the house made hoi sin based sauce. 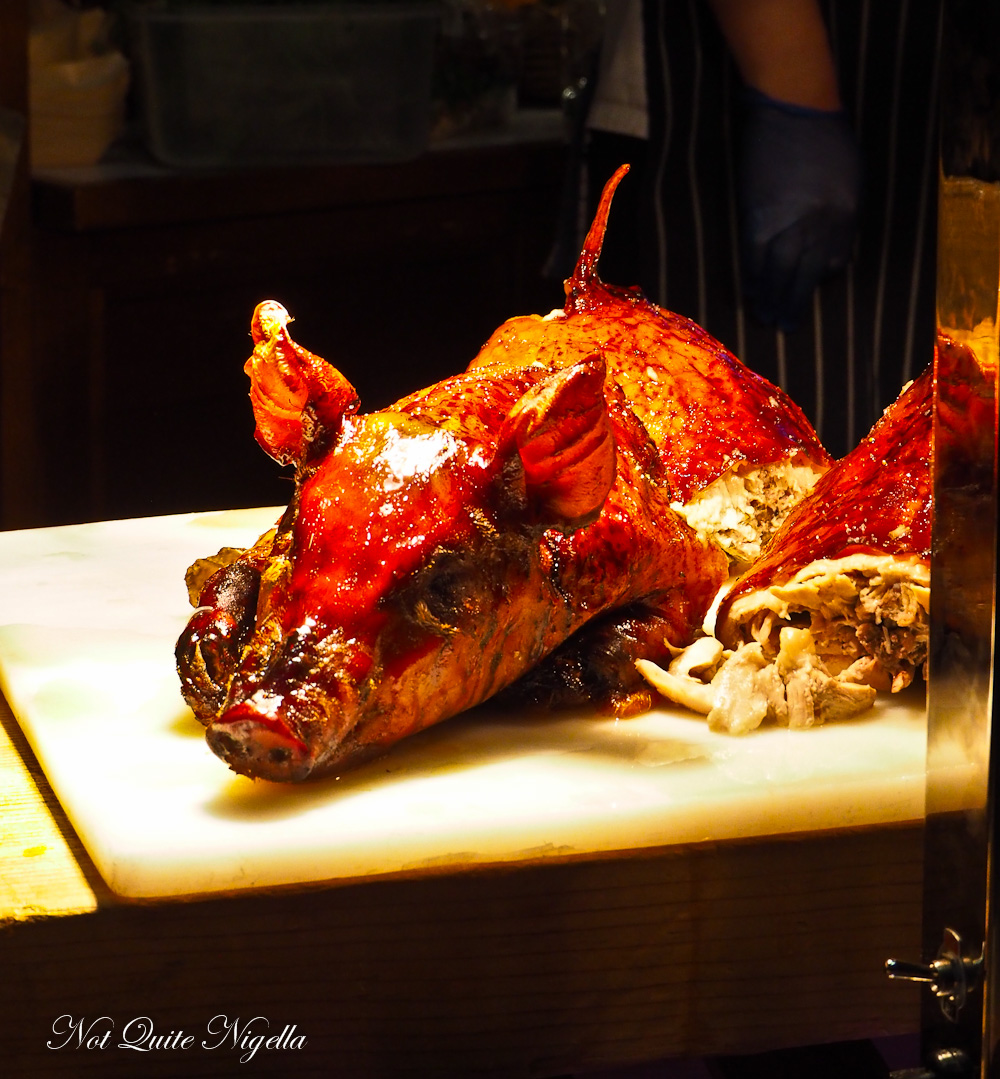 And then there are the pigs. Eight suckling pigs were cooked that day and a plate of the juicy, flavoursome meat on a little vermicelli and a butter lettuce leaf sets you back one stamp each. The salads in particular are filling, wholesome and great value. 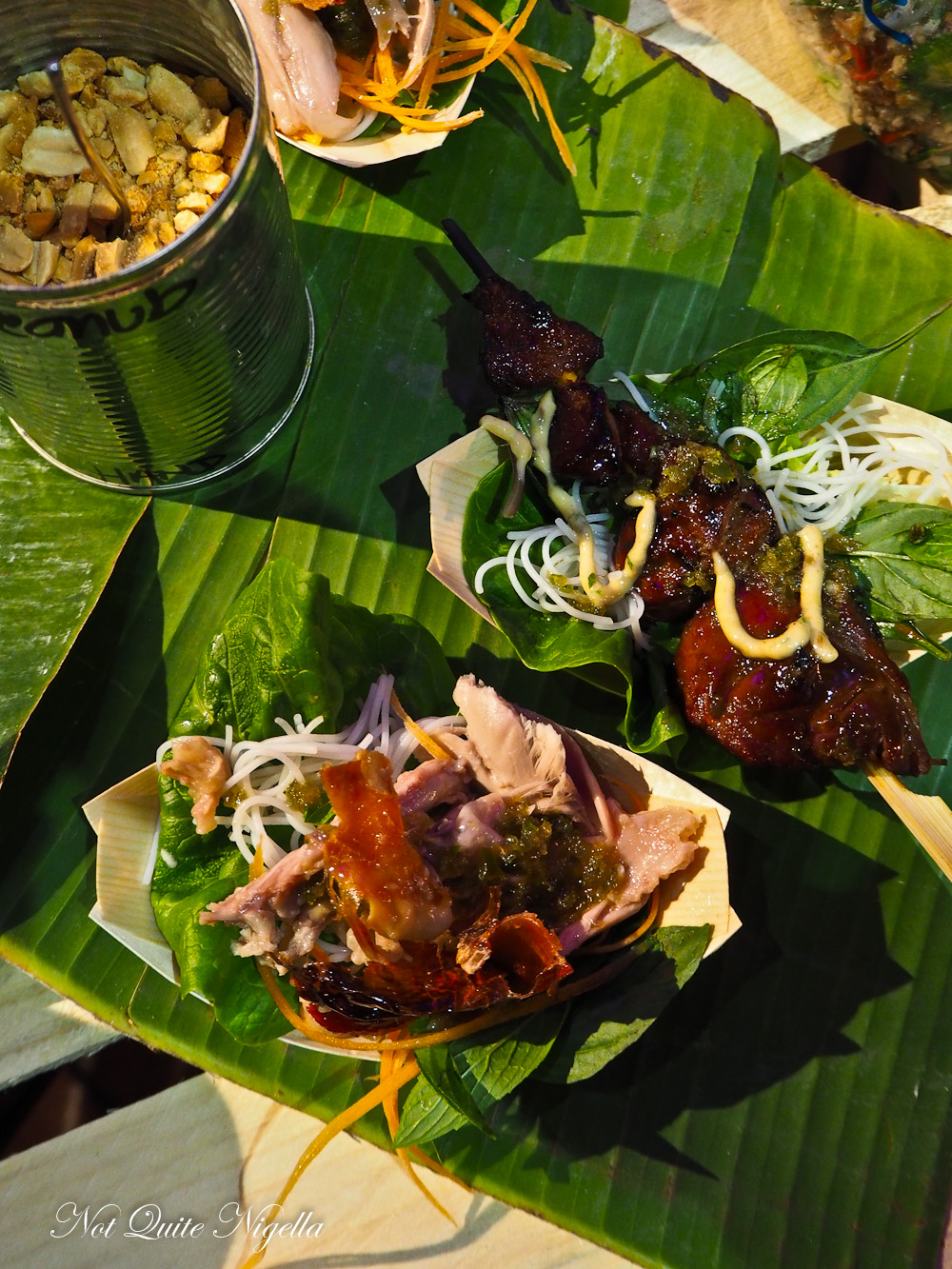 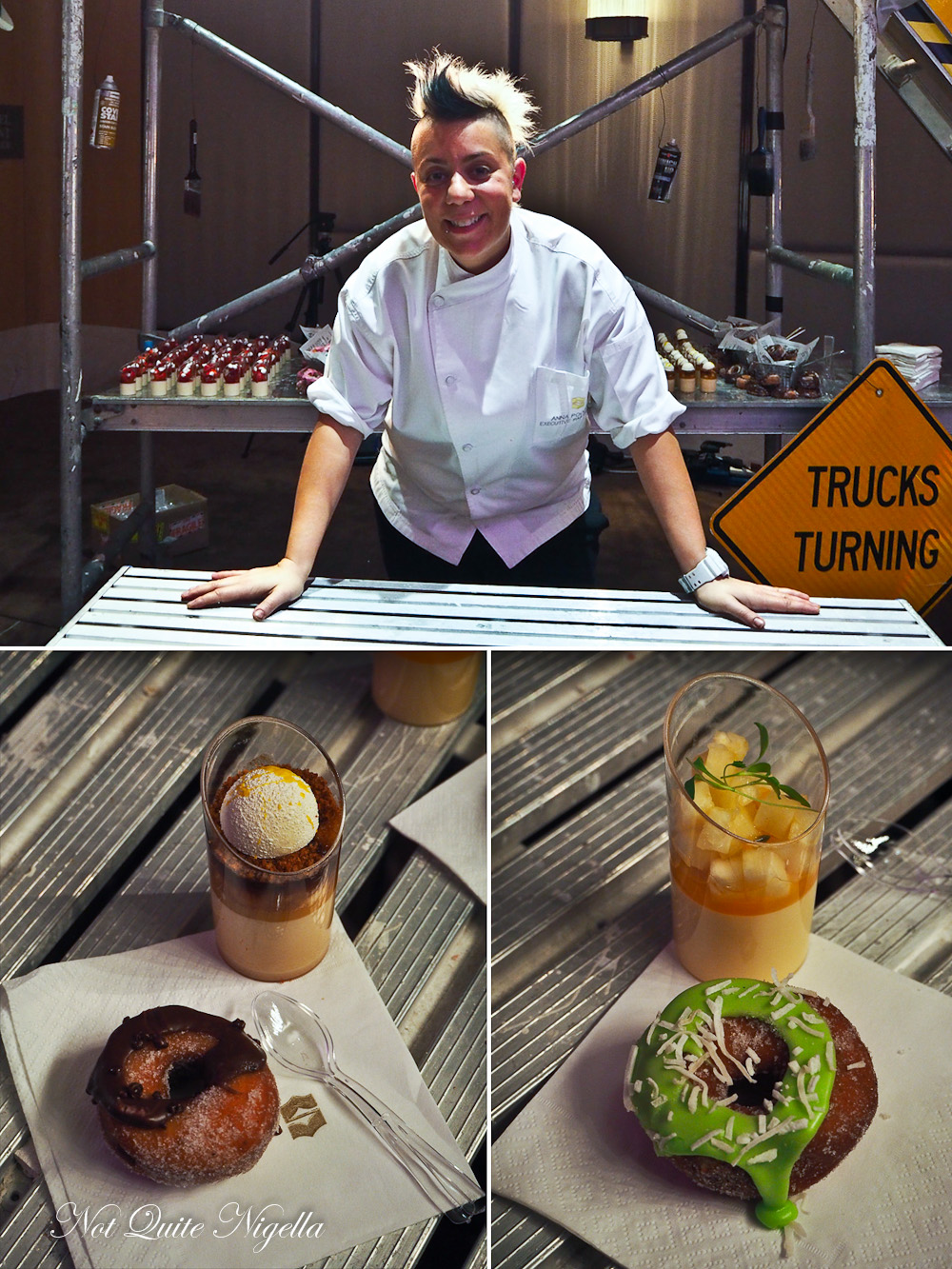 Next we stop at Anna's stand and for one stamp you get one verrine and one donut and there is a choice of three. I go for the "Asian Malaysian" verrine and a lime donut and the "banana-rama" verrine with a chocolate donut. The favourite is the Asian Malaysian tropical verrine that is refreshing and with just the right amount of sweetness with passionfruit posset, mango gel, pineapple popping pearls and a coconut lime doughnut. With so much sugar on offer, it gives us a refreshing counterpoint to the sweets. The banana verrine is also good and is rich, creamy and light and is made of caramelised white chocolate, passionfruit and banana jam. 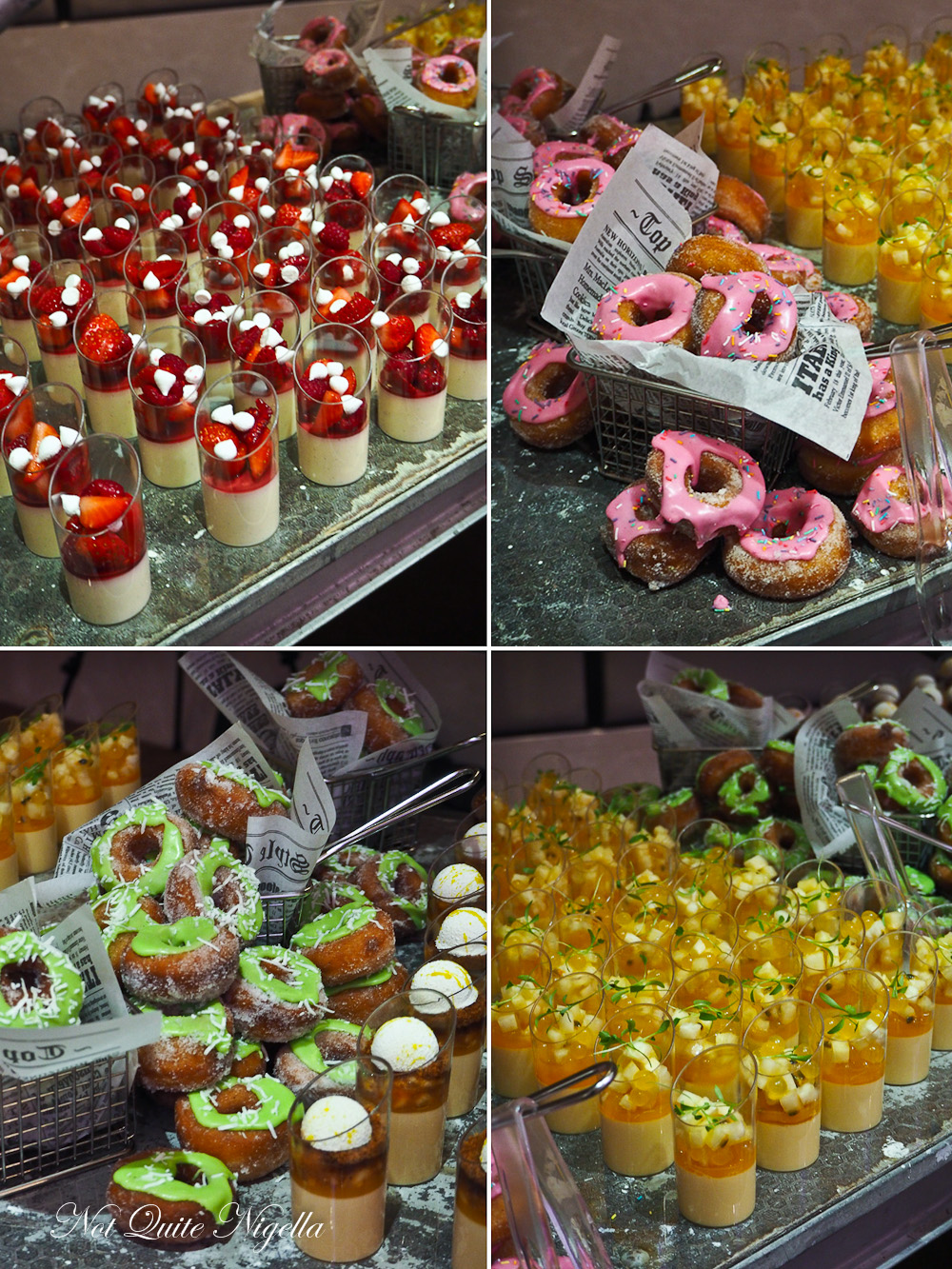 Next we try the Lux Bite tarts at one stamp each. The "Endless Love" is a slender finger of tart based on Pierre Herme's Ispahan tart with a rose and lychee ganache, fresh strawberries and silver leaf while the Sood Tee Ruk is a square tart which is a kalamansi lime curd with jackfruit, logan, chilli salt, meringue and kaffir lime sherbert. 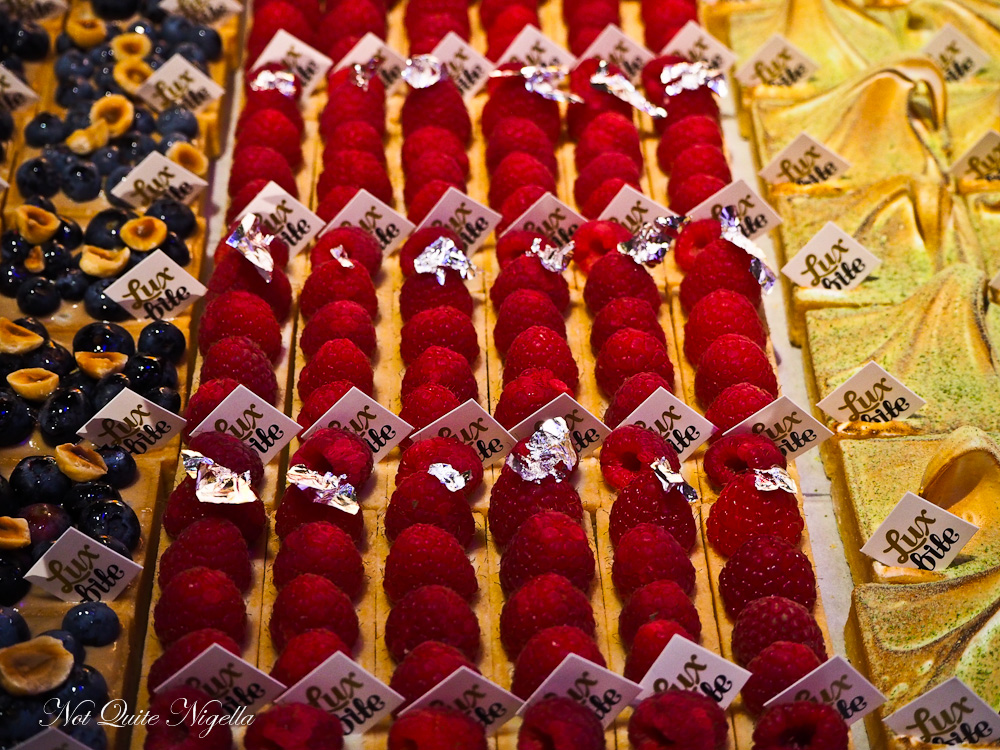 That sounded very interesting although in my bite (I was sharing tokens with Fiona another guest) I only really got the curd and the meringue and not so much of the rest of it. There is also a blueberry tart with rice pudding, blueberries and hazelnuts. 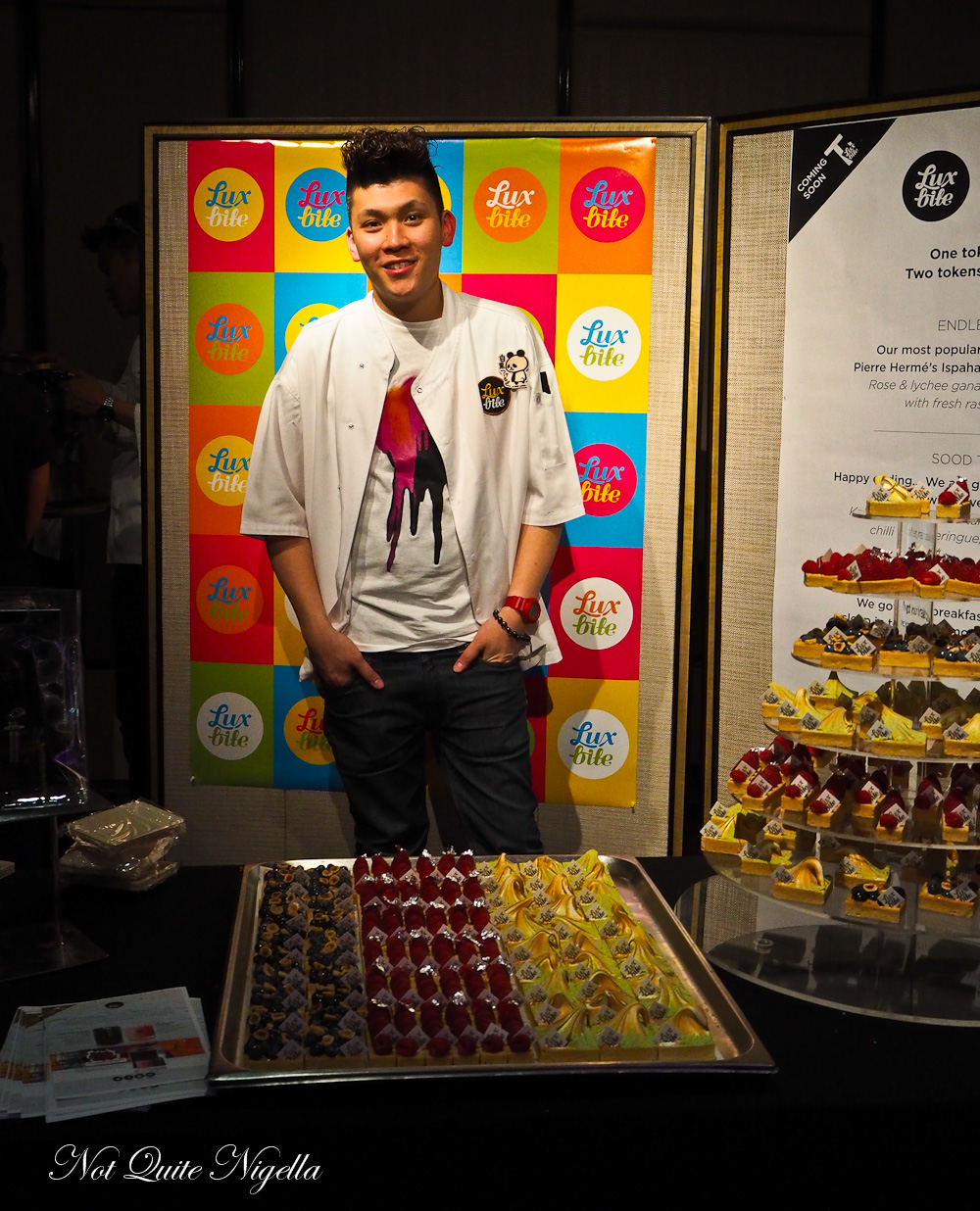 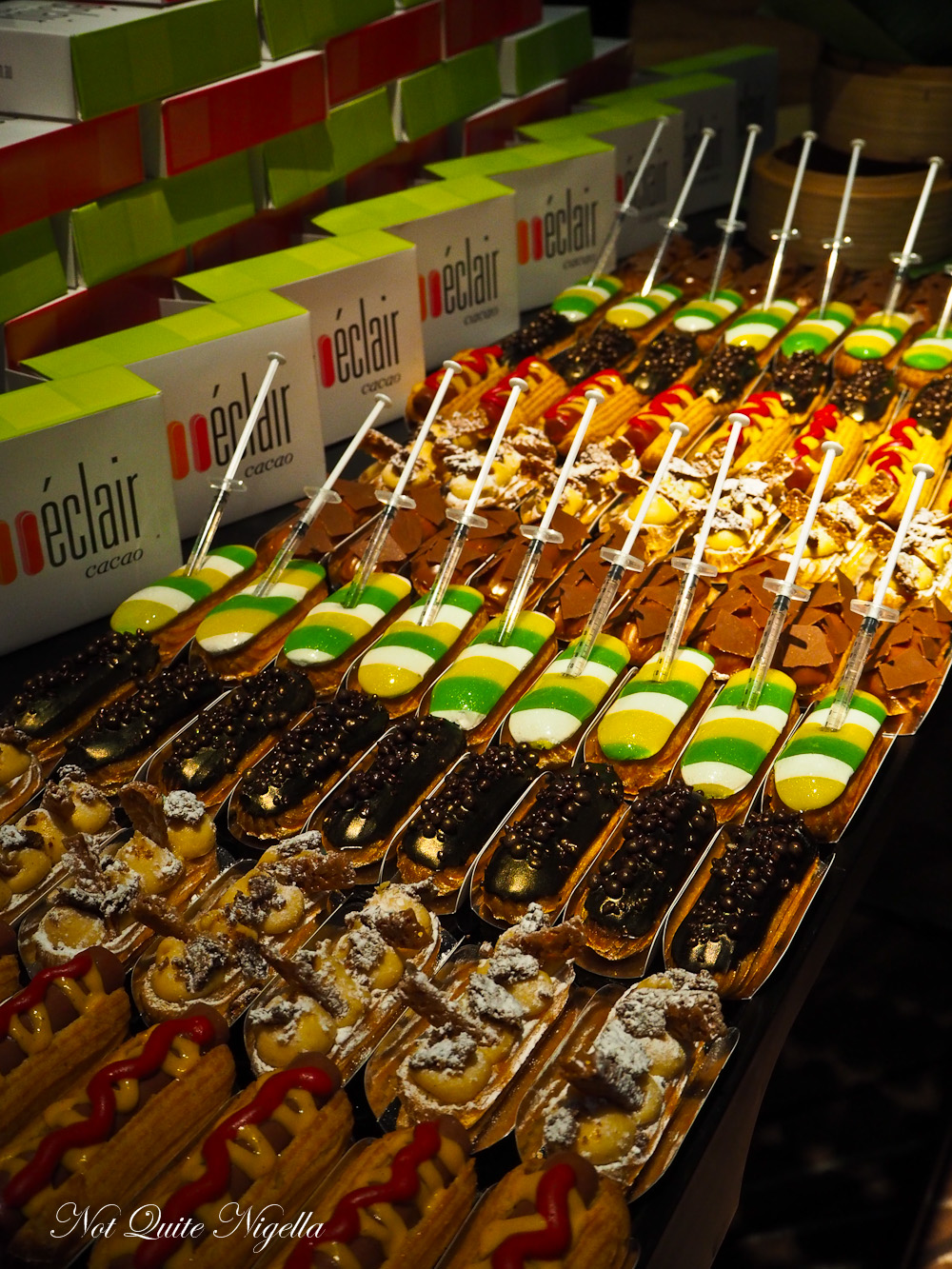 We assess our options and as it is just past 6pm we figure that the queues will only get larger as people arrive after work. The longest sweets queue is at the Cacoa eclair stand so we make our way there and stand in the queue. I talk to a lovely NQN reader there while waiting. There are two queues: one for the deep fried eclairs and the other for regular and given that there are four of us, we order two of each eclair. 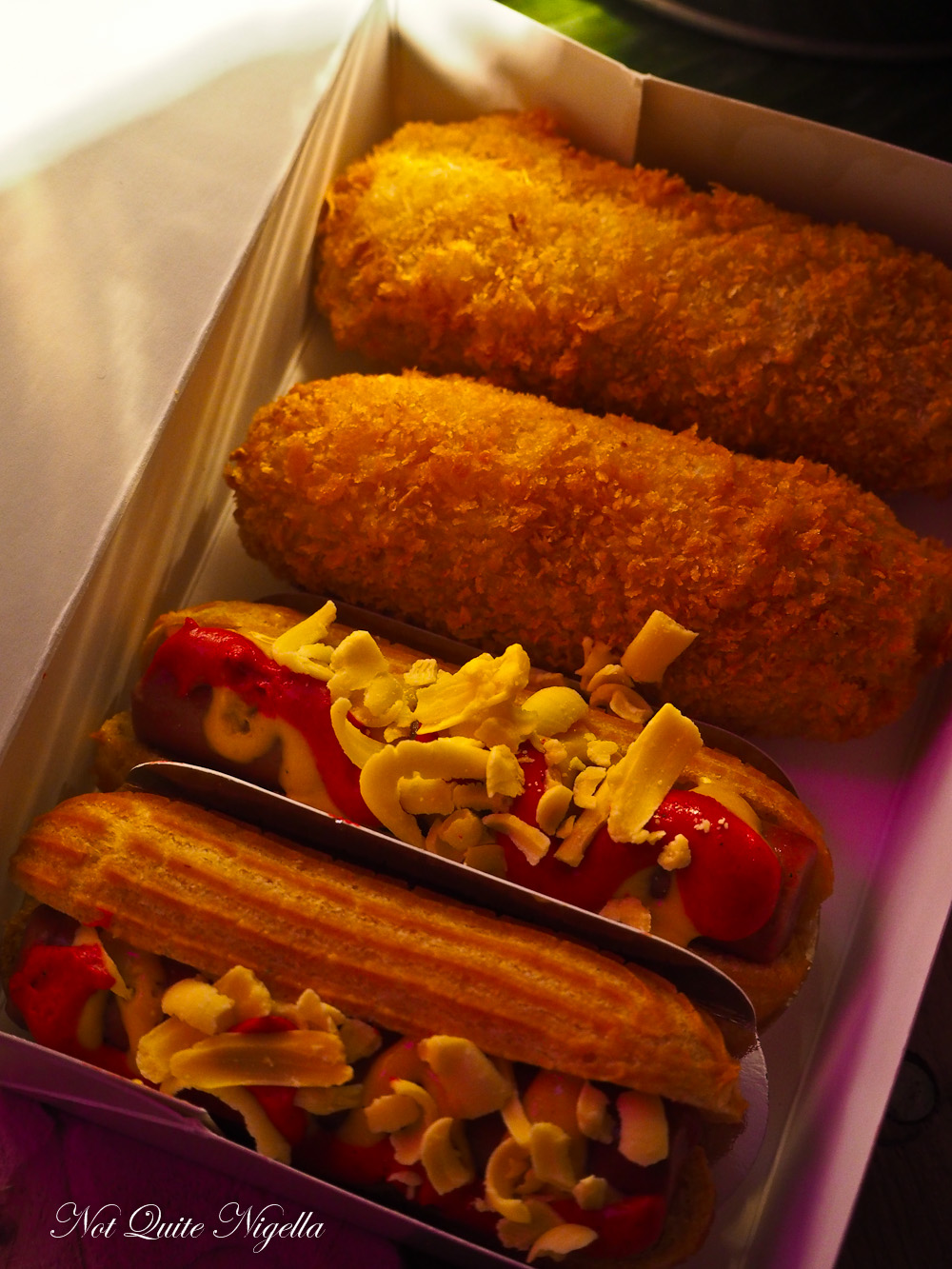 The yellow and green striped caipirinha is a hit with the lime creme filling and a syringe cachaca boost (distilled sugarcane spirit). Also another favourite is the deep fried eclair with a crunchy crumb and coconut creme filling. The dark chocolate is good and the peanut butter and jam has a nice crunch. The hot dog eclair is more an exercise in cuteness and mind games and it really does look like a mini hot dog. 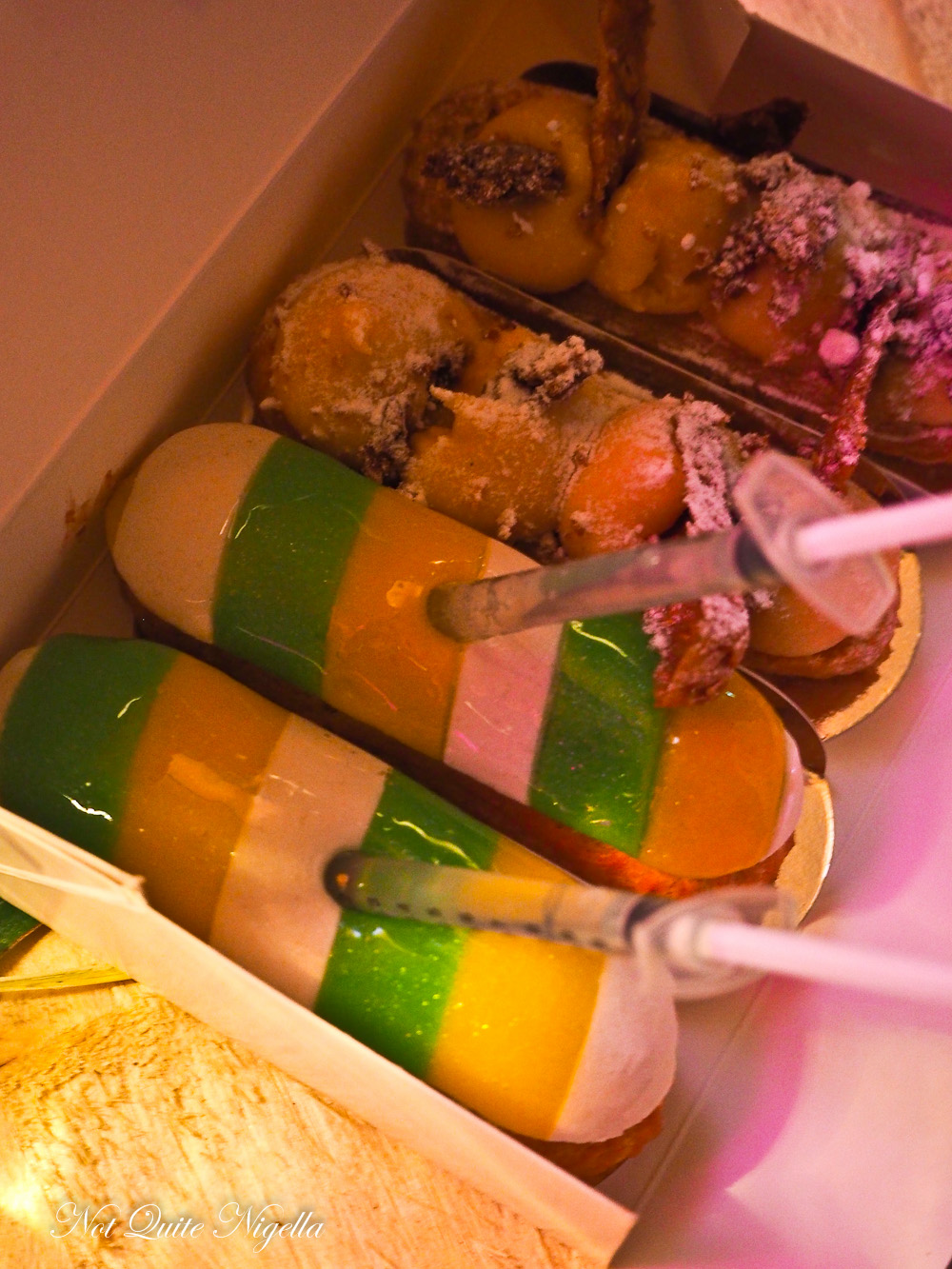 By now Nick has arrived after battling cross city traffic and he is holding a box of galactoburecko for Anna. I had to laugh. I mean honestly who brings a box of sweets to a sweet event apart from Nick? Anna is busy clearing the runway in the middle for the break dancers. Yep all of Anna's events feature music and surprises. 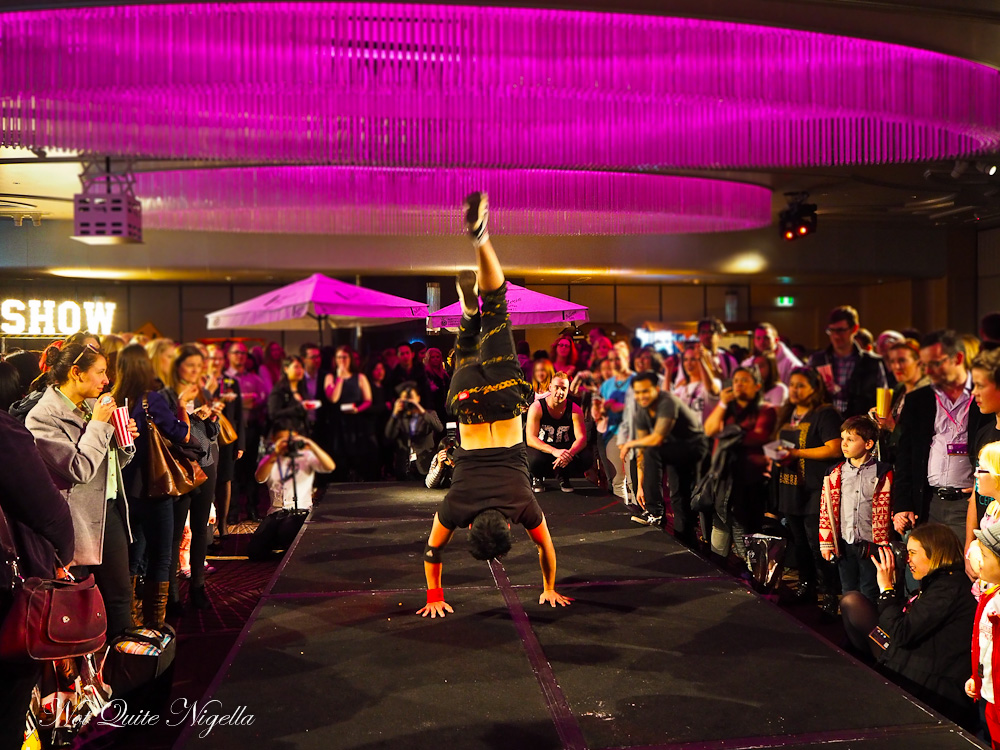 Each guest was given a goodie bag at the beginning of the night and inside it is a bottle of water which is much needed and appreciated and a bag of Callebaut chocolate pellets. But having finished our water we queue up to buy one of Blu Bar's spyder cocktails, worth 2 stamps each. 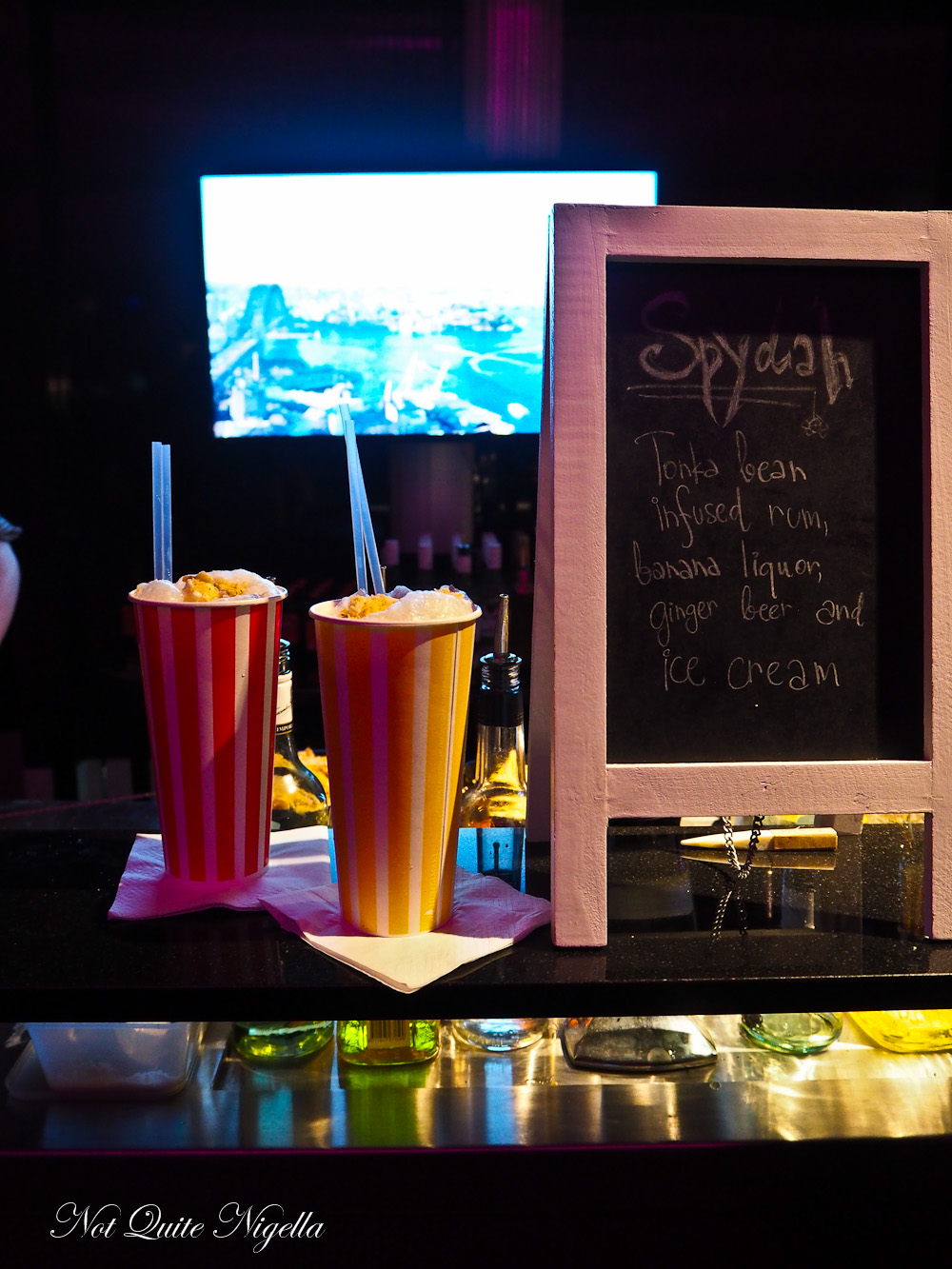 Sure it's mostly ice cubes but the cocktail is a mix of tonka bean infused rum, banana liquor, ginger beer and vanilla ice cream. I'm a huge fan of spyders and this is dangerously good and drinkable. 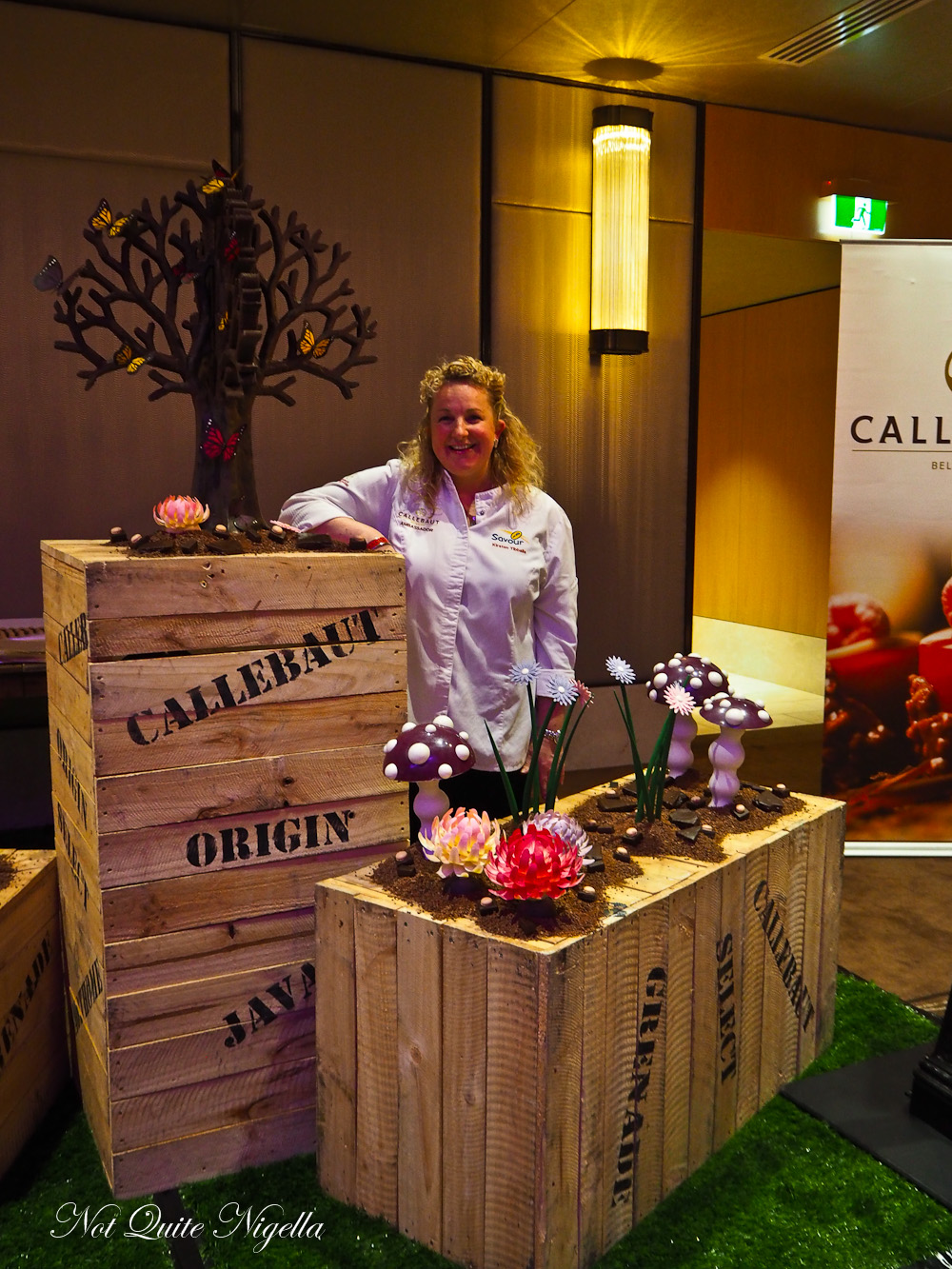 My feet are hurting and if I could suggest anything it's that there needs to be more seating and tables for people to eat and sit at between queues. We make our last sweet selections at the Savour stand where pastry chef Kirsten Tibbals is selling books. For one stamp you can get a bag of chocolates including a chocolate dipped honeycomb, a "chocaron" i.e. macaron layered with tea infused ganache and a cinnamon hazelnut praline topped with coffee ganache. I took these home and alas they were crushed in my bag but they were incredible, particularly the compressed honeycomb and chocaron. 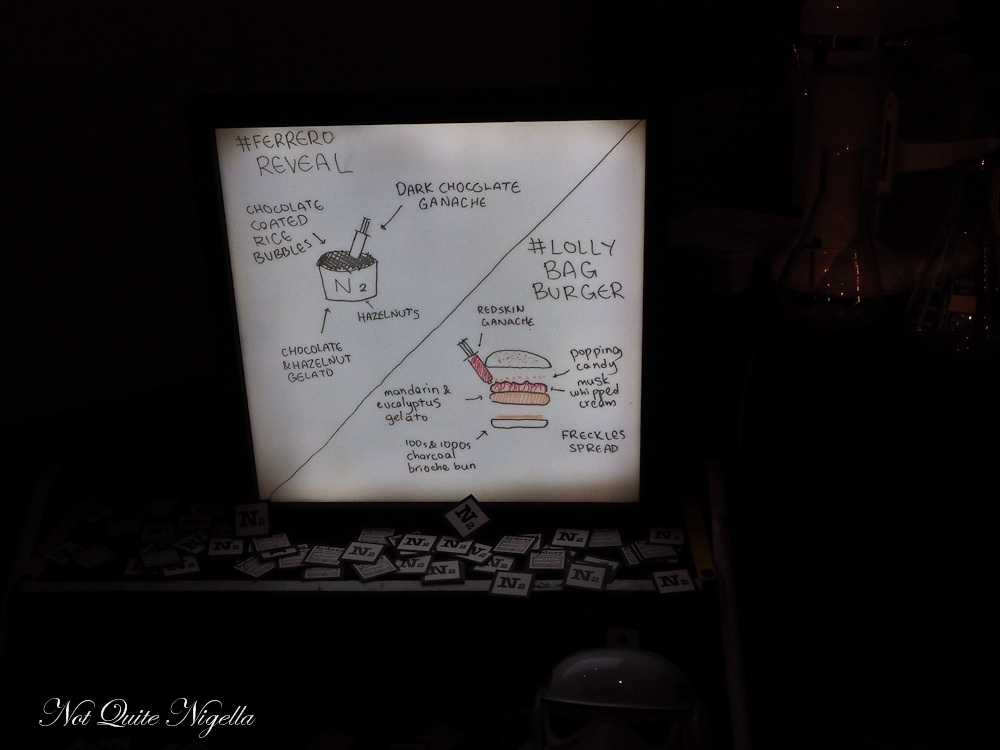 We spot a few people walking around with black burgers with syringes sticking out of them (did the medical supplies industry ever anticipate that pastry chefs would be their clients?). We make our way towards N2 gelato and there are two sweets on offer. 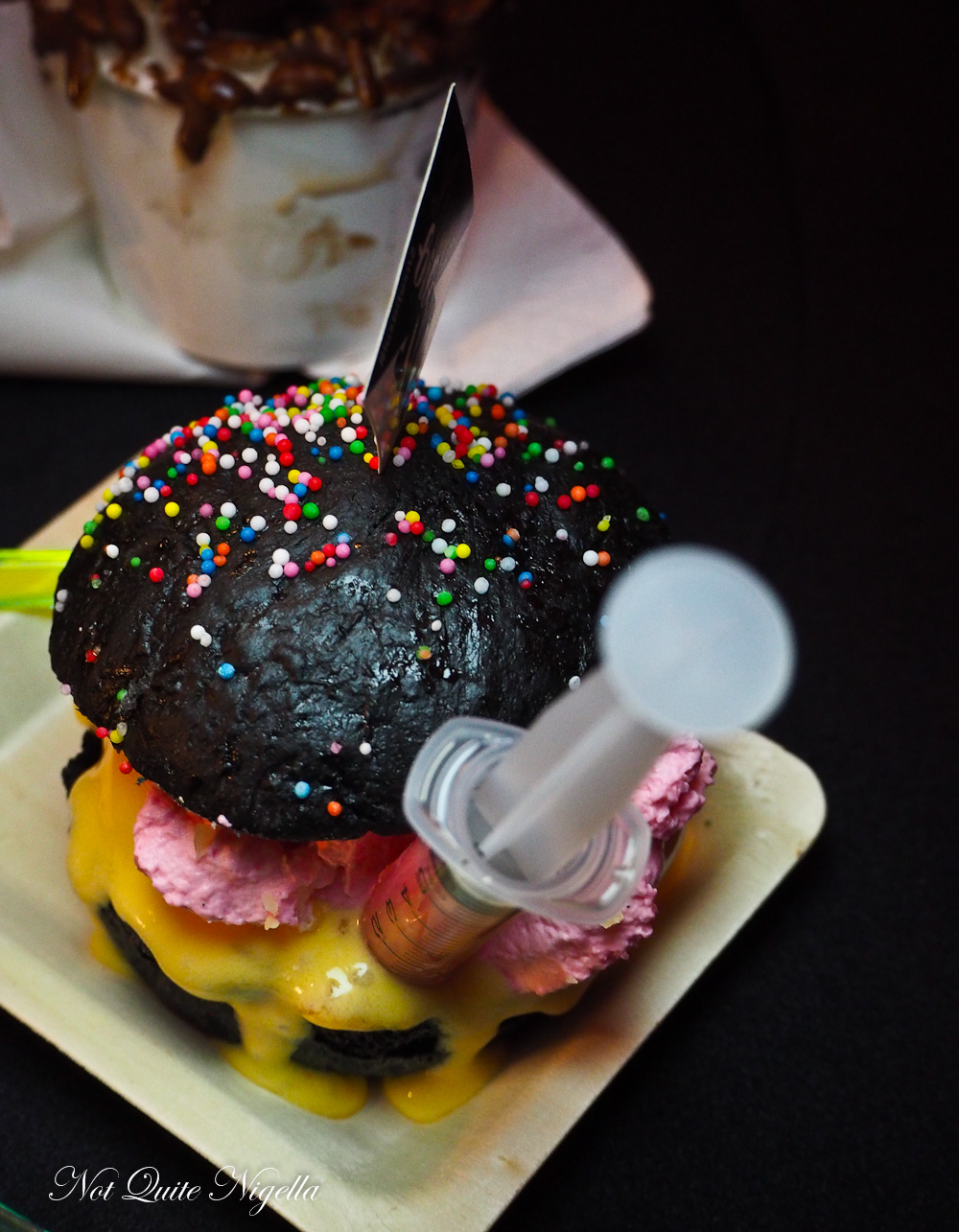 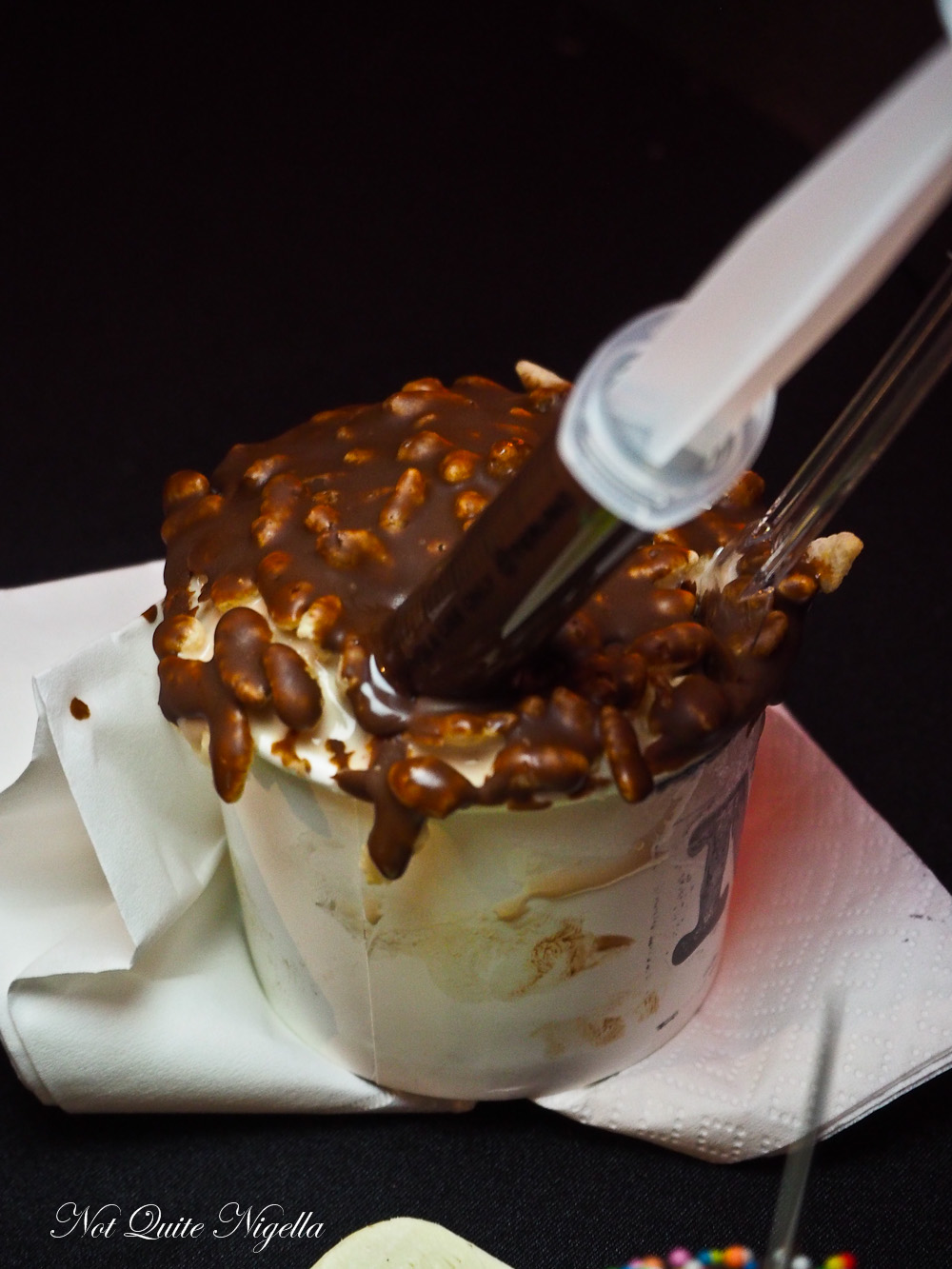 A little more regular is the "Ferrero Reveal" with chocolate and hazelnut gelato, hazelnuts and chocolate coated rice bubbles. This too has a syringe of dark chocolate ganache that we inject into the ice cream. 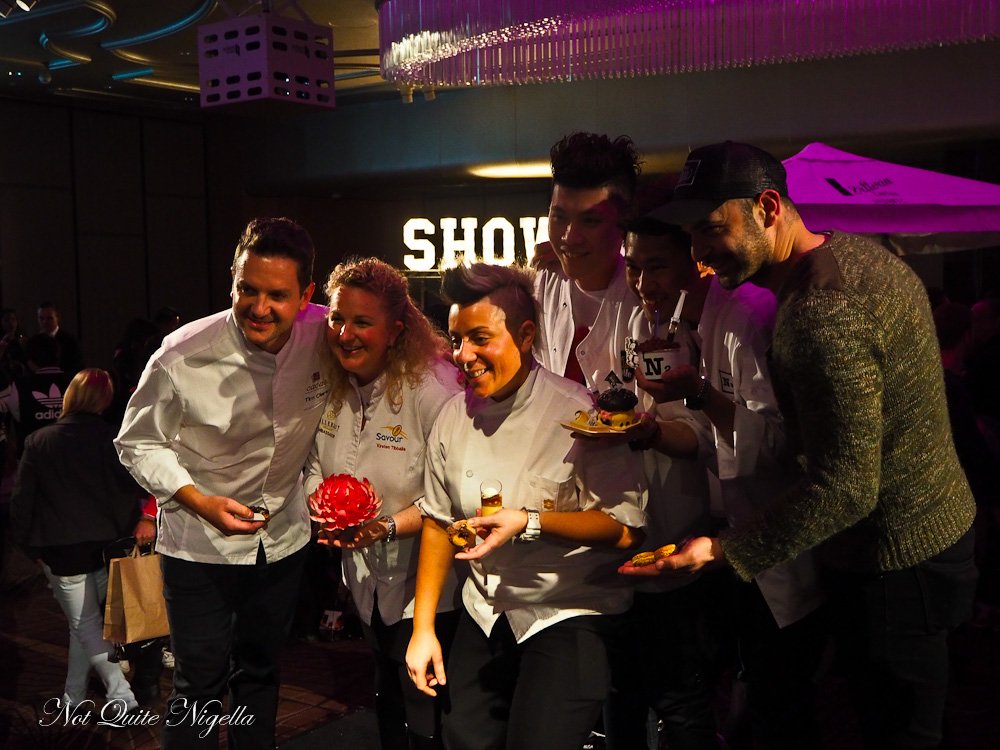 By now the crowds have arrived in full force. The pastry chefs each come out to a round of applause holding one of their creations. Mr NQN and Nick still have some stamps to spend and having used up all of mine, I seek refuge with the lovely baristas from Vittoria and gratefully perch on their bar fridge. 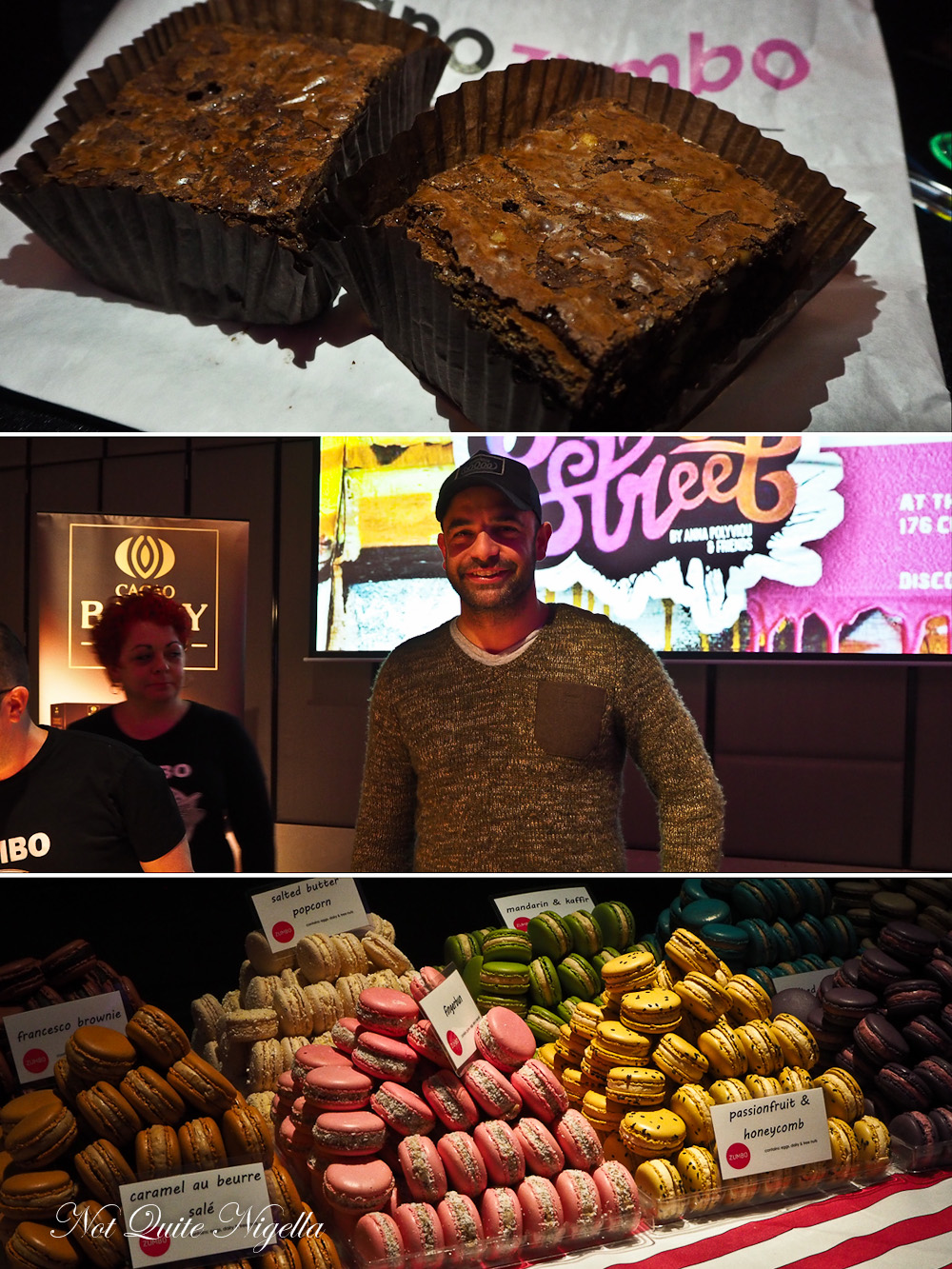 Fiona goes to the Zumbo stand but alas the macarons have sold out and she contents herself with two enormous hulking brownies (previously $6). The man himself is there taking lots of pictures with fans. The last tokens are spent at Anna's stand with the salted caramel and raspberry "Mag-Annas" or mini pops. Eaten while watching a troupe of dancers and a crowd of sugared up people surrounding us. 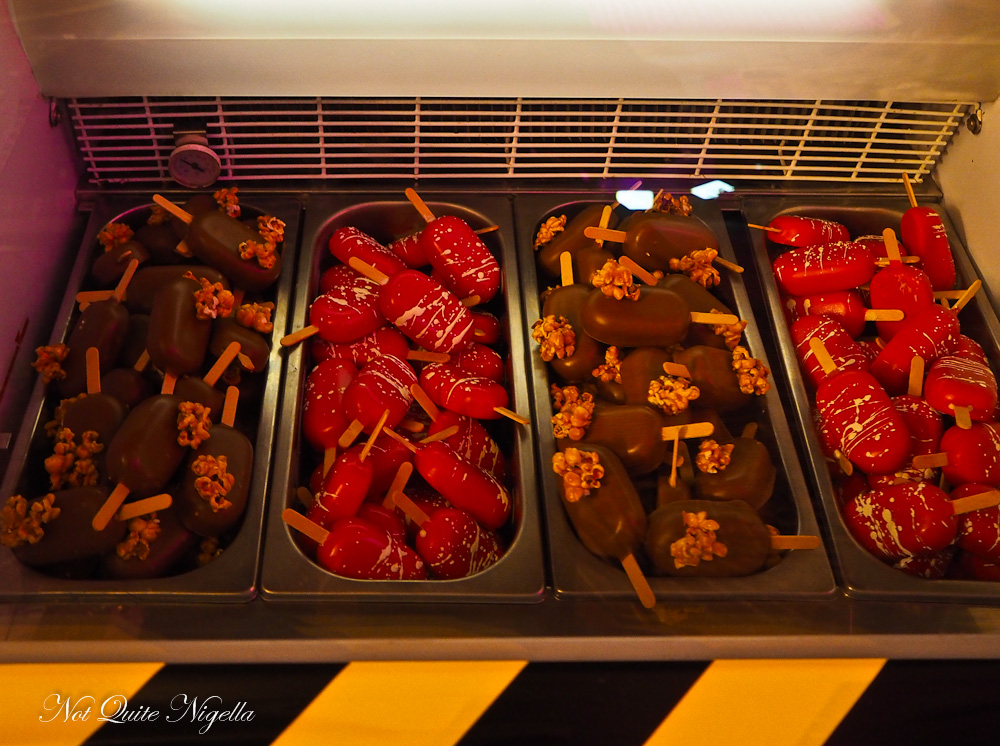 Anna tells us her dream for the next Sweet Street is for it to become a day charity event for children's charities where kids can attend the event and at night, paying adults can experience the event. I mention that it sounds all very Willy Wonka and she agrees, it's a title she is happy to take on.

So tell me Dear Reader, which sweet appealed to you? And what do you think of an event like this? Would you start with savoury or could you have all desserts? 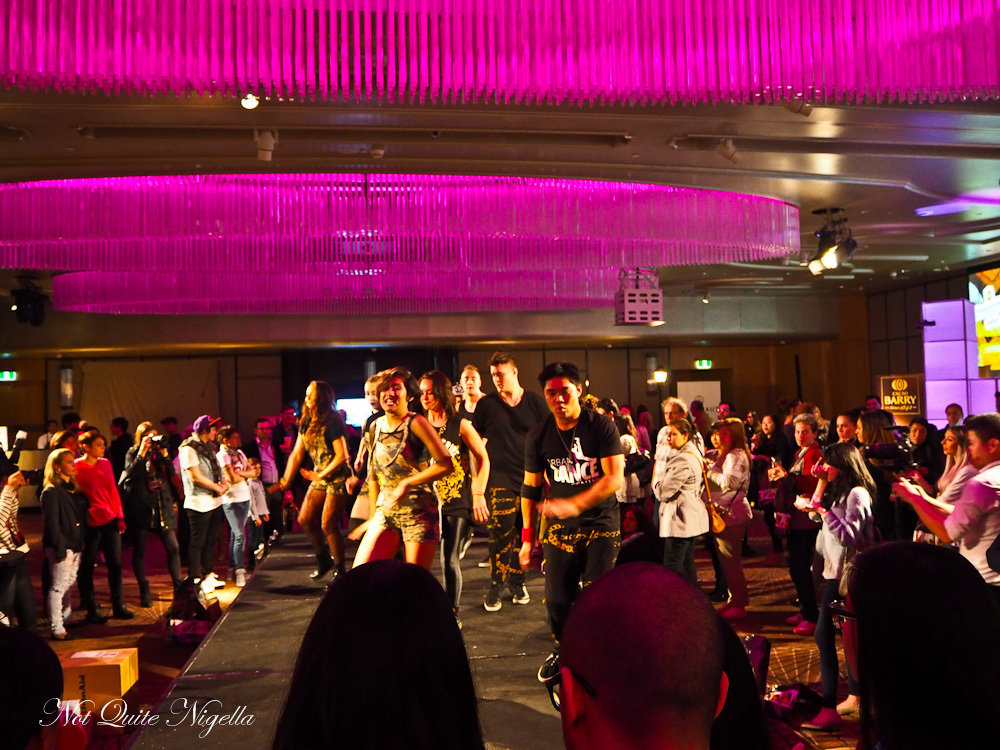 NQN and Mr NQN were guests of the Shangri-La Hotel