Smørrebrød, A Veterinarian's Midnight Snack & All About Danish Food! 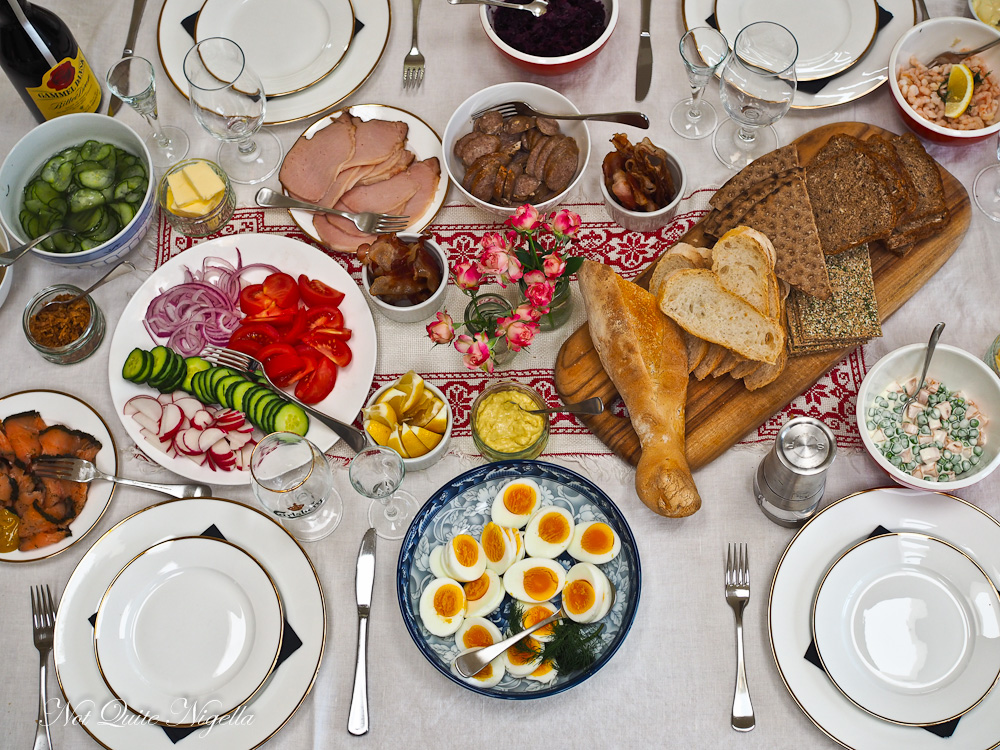 There's a quote at the beginning of the Noma film about Nordic food. That before Noma, there was no Nordic cuisine. That may be true in the fine dining or gastronomic sense but Danish food has had a long history and is distinct from other Nordic cuisines. And now that Noma is sitting the sunny shores of Sydney, a question that some people are asking is, “What exactly is Danish food?”. To find the answer we asked our Danish friends, Viggo and Madame Butterfly. 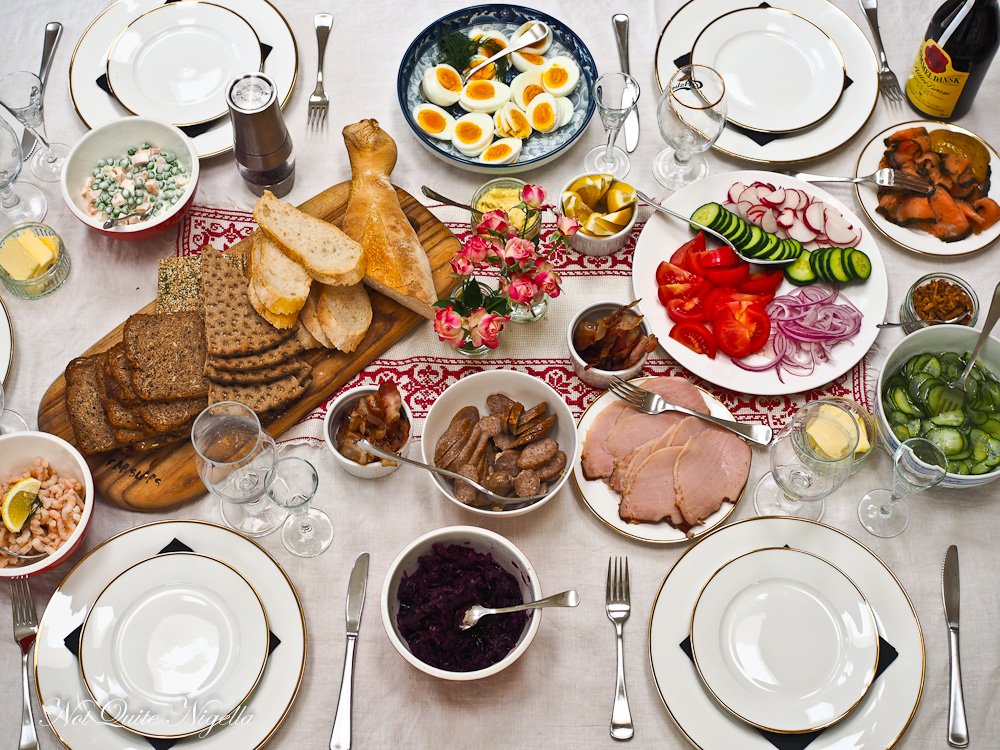 They kindly agreed to show us a typical Danish meal over a long lunch including some of the more popular Danish items. The main dish would be Smørrebrød or Danish open sandwiches which is made up of many little dishes where diners help themselves to an array of toppings to place on their slices of buttered rye bread. 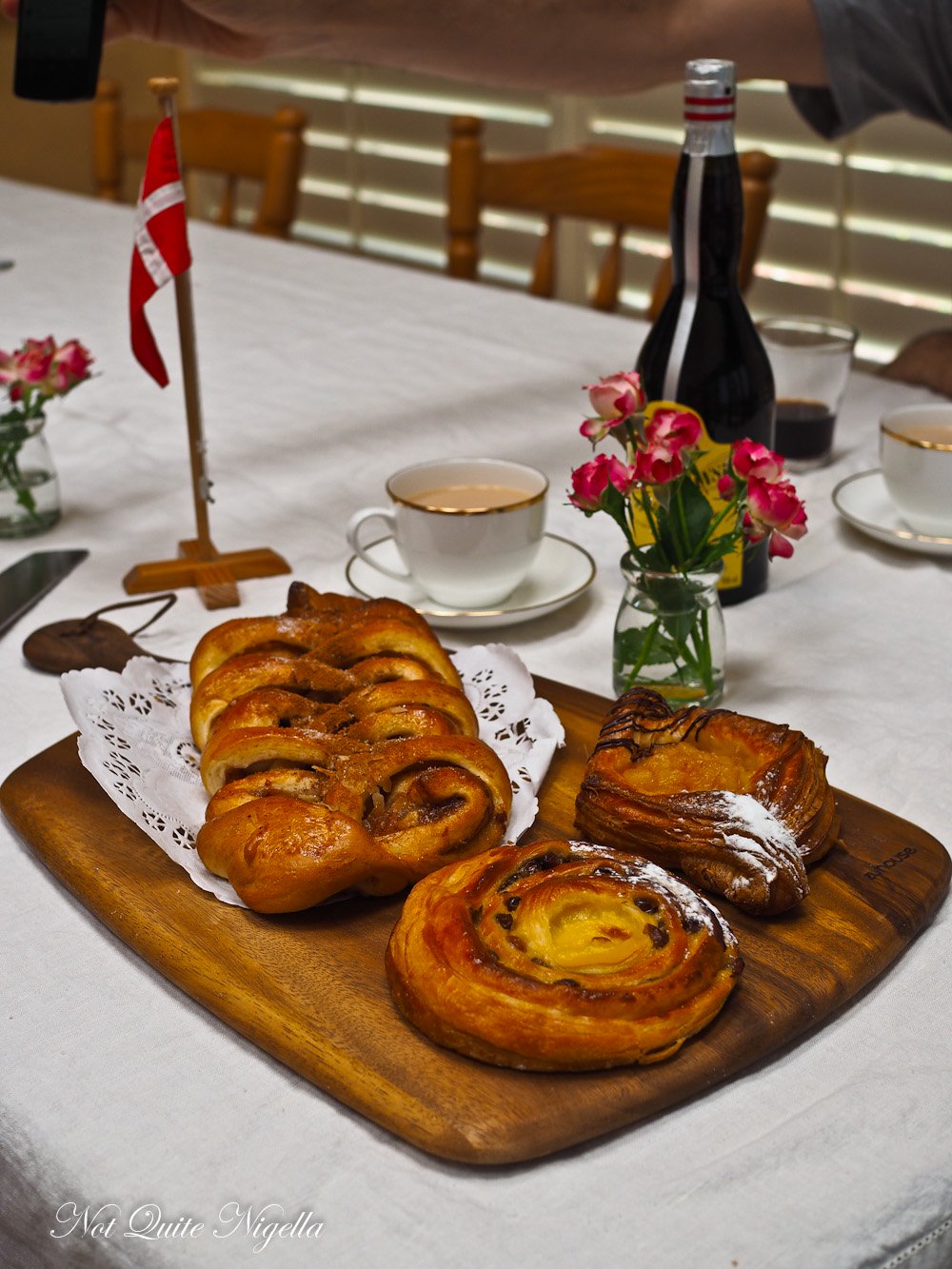 Danes aren’t clustered in any particular area in Sydney and this makes shopping for a Danish feast a bit of a challenge. To find all of the ingredients necessitated many trips across Sydney and the bulk of the items were procured ahead of time-there were crisp breads and tiny prawns from Ikea and sauces from the Danish church Christmas festival. 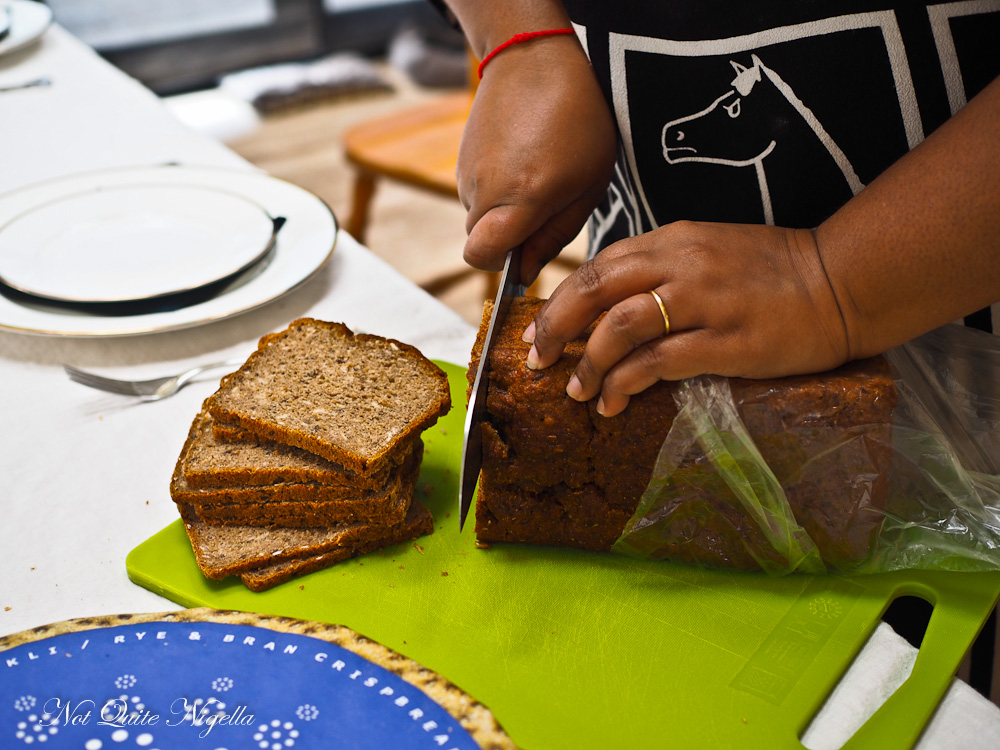 Madame Butterfly baked her Rugbrød or rye bread, a loaf that takes about three days in total to make from beginning to end. Danes love their rye bread and have been eating it for over 1,000 years. It is said that each Dane eats about 20-25 kg (44-55lbs) of rye bread annually. The Danish version of rye bread is different from the other European counterparts in that it is less sweet but darker and more sour. 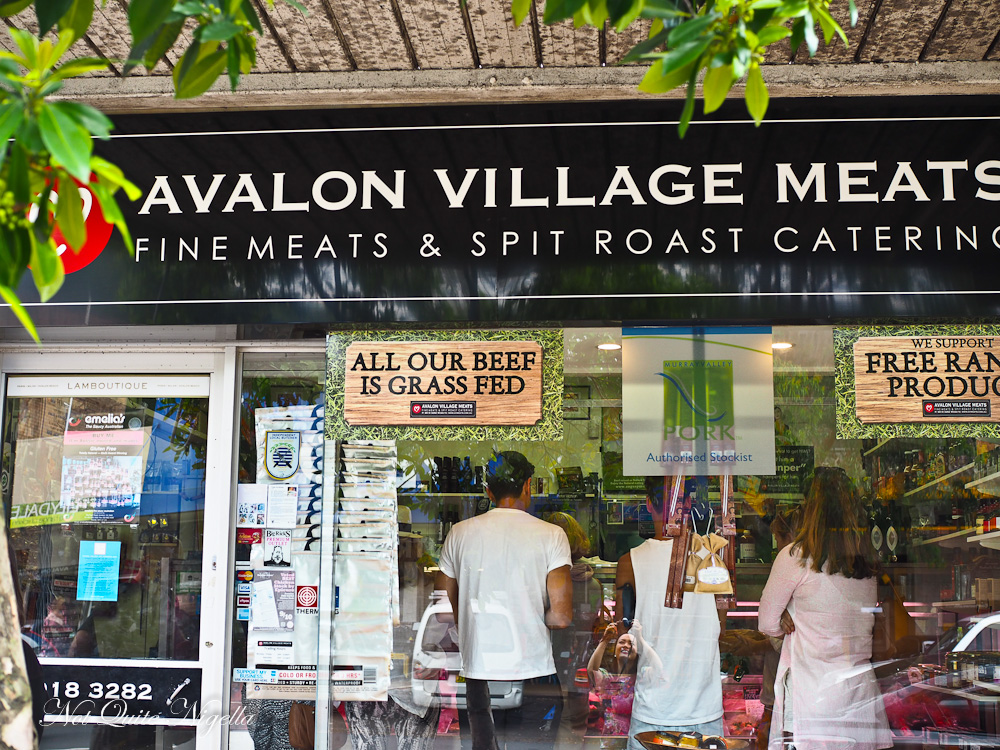 The final purchasing would call for a trip a bit further afield in the Northern Beaches to the Avalon Village Meats where Danish butcher Lasse Hansen has been plying his trade for 15 years. His store is very busy this Saturday morning. He makes Danish specialties like Leverpostej (pork liver pate), Rullepølse (a pressed and rolled spiced pork sausage similar to pancetta) or hamberryg (salted and smoked pork) but these need to be pre-ordered. He also stocks a pork and veal mince for Frikadeller meatballs. 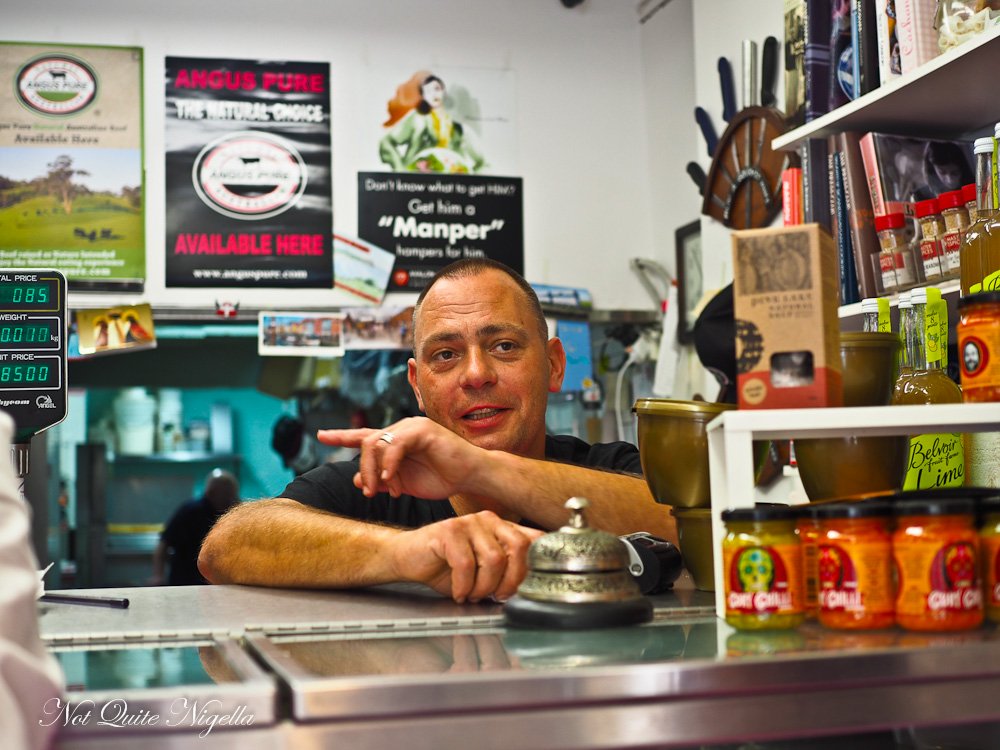 When I asked Viggo to name a Danish national dish, it was easy. "Pork roast is it - usually with all the trimmings - red cabbage, potatoes and brown sauce." Pork is the most popular meat by far in Denmark which each Dane on average consuming 70 kg of pork annually. As to why pork, Lasse explains that pigs are an economical beast-you can feed them anything and they grow big fast. When he first started the store (he was also a butcher in his native Copenhagen), he despaired of the meat industry in Australia. Nowadays he says the best pork produced here could rival the pork in Denmark. “Australians are really learning how to eat pork,” he says. 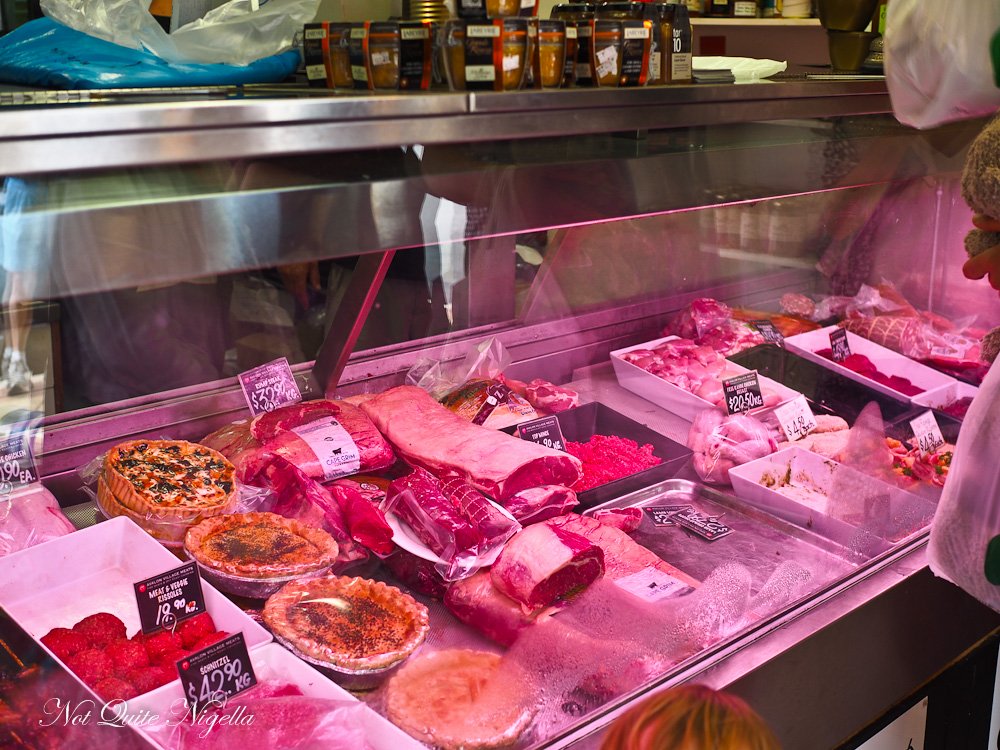 Another item Lasse is known for is his pork liver pate or Leverpostej, the ubiquitous national spread which is much loved by Danes-each Dane is said to consume 4 kilos or 8.8 pounds a year each. The pork livers must be fresh to be used in a pate and the pate is a great one for those who don’t like a strong liver taste. Served in an aluminium tray it’s a delicious coarse grind pate and can actually be served chilled or hot. It's markedly different from other pates and starts off with a bechamel sauce mixed with pork livers, bacon and eggs. It is also a bargain at $9 a tray. He prepares it not to make a profit but for a service for all the Danes and non Danes that have fallen in love with it. He never advertises it because “I can’t make enough to sell if I did,” Lasse says. 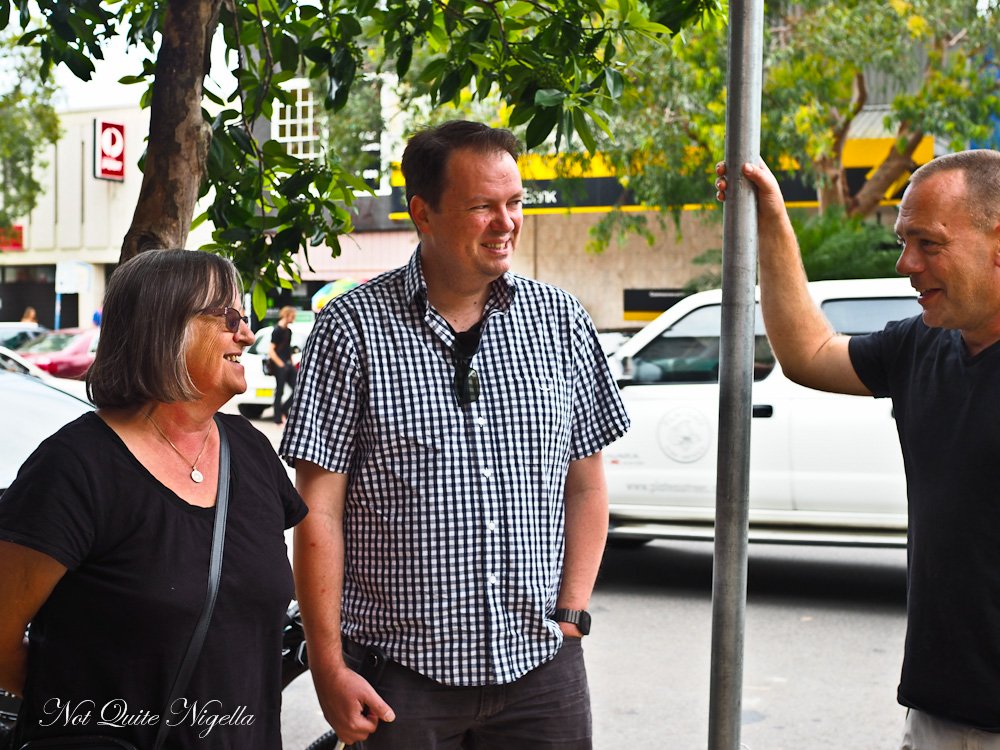 Bacon and ham in Denmark is also different than in Australia. Cured products need to be heat cured in Australia because of the food hygiene laws (Australia is also obviously hotter than Denmark and bacteria flourishes in the heat). As a result, all of our hams do not need to be boiled whereas Danish cold cured hams and bacon must be cooked as they are raw and cold cured. This changes the end product. Lasse sells cold smoked, marble cured bacon which Viggo says crisps up better, is more thinly sliced and stays in one piece. Butchers in Denmark are also different than those in Australia. Here they tend to be pure butchers whereas in Denmark they also make smallgoods and pâtés. In his Copenhagen store they made 90 types of salami and 60 types of pates. 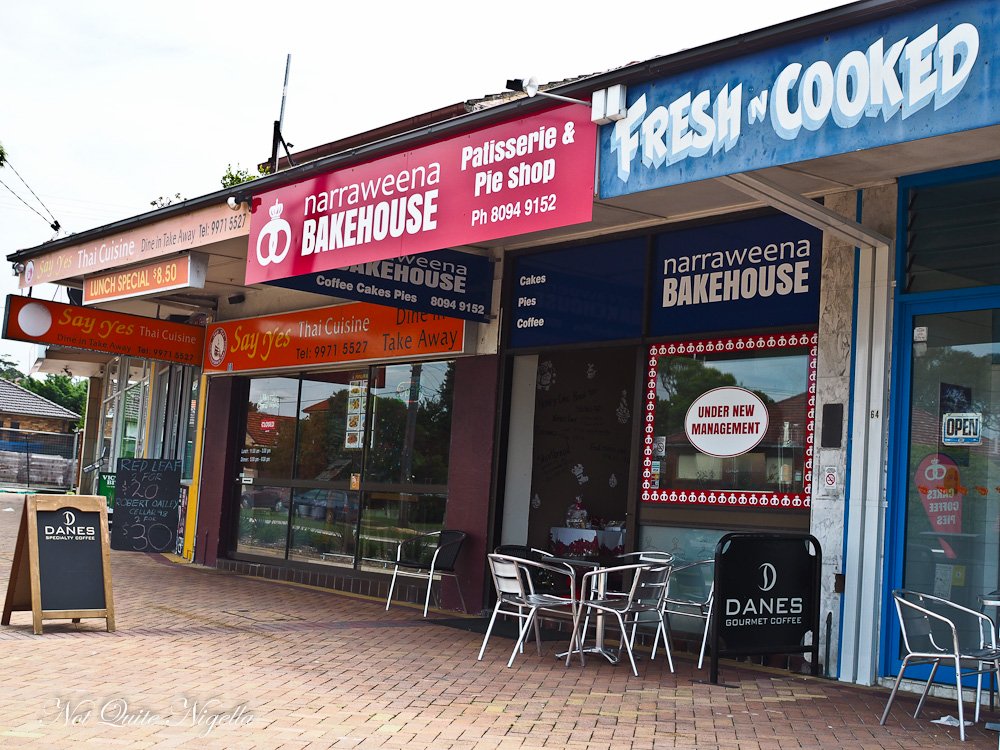 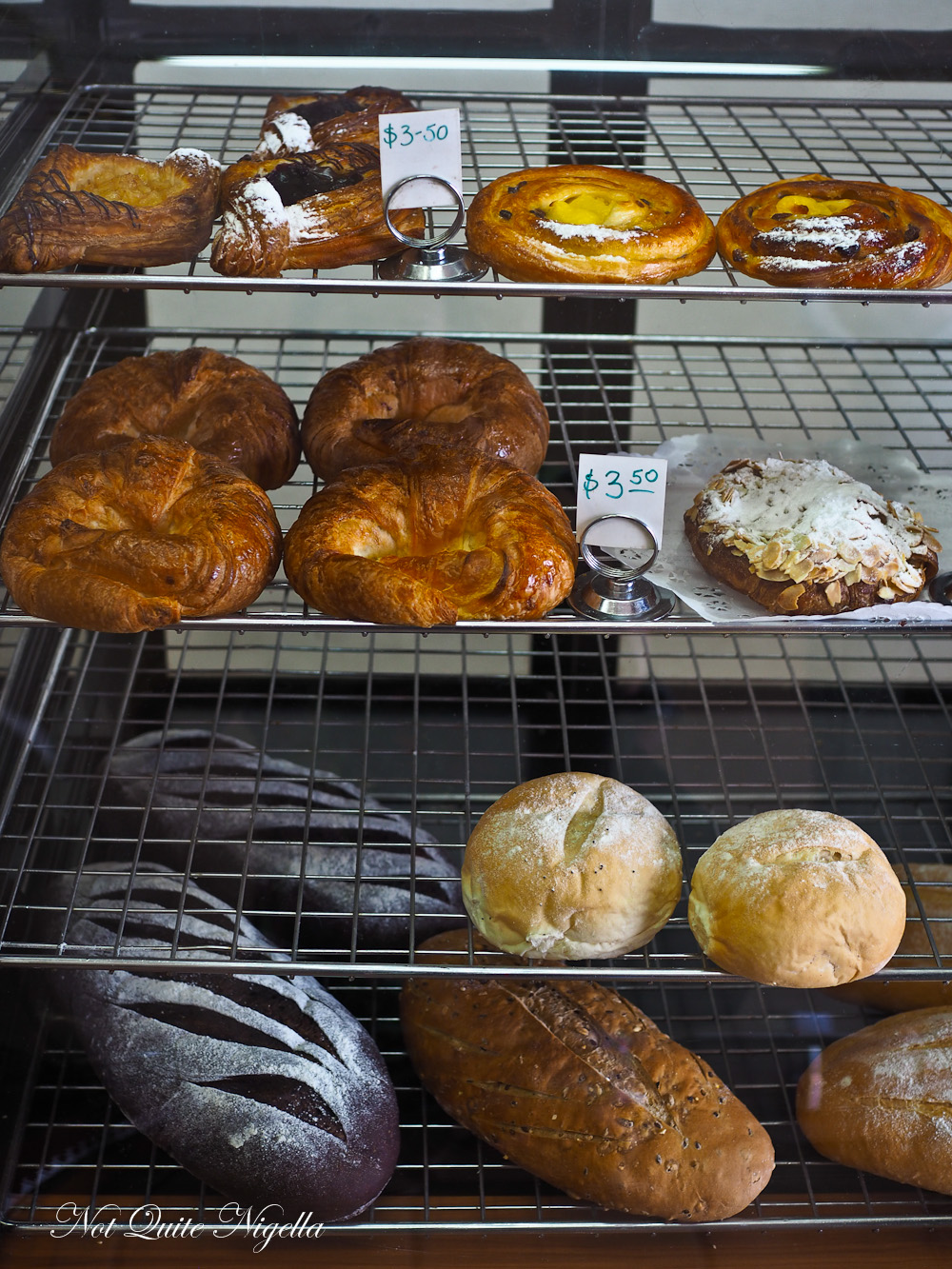 We return to Viggo and Louise’s apartment and Louise, Viggo and Madame Butterfly get cooking. Into the pot goes the smoked pork to cook through and Viggo places the Leverpostej pate in a waterbath to bake in the oven for 1.5 hours from frozen. Madame Butterfly starts chopping vegetables to make an Italian salad-not named for any Italian ingredients but for the colours of orange (red), green and white for the Italian flag. It is made up of pea, carrot and a mix of mayonnaise and yogurt. Viggo starts cooking the Medisterpølse sausages. Madame Butterfly pulls out a bowl of agurkesalat or Danish cucumber salad that she has made ahead of time. To make it she says, "Sugar is mixed with slices of cucumber which draws the water out. A nip of salt and white pepper is also added and the white vinegar is poured into the mix. Stand for 2 hours before use. There are several different ways of making this." 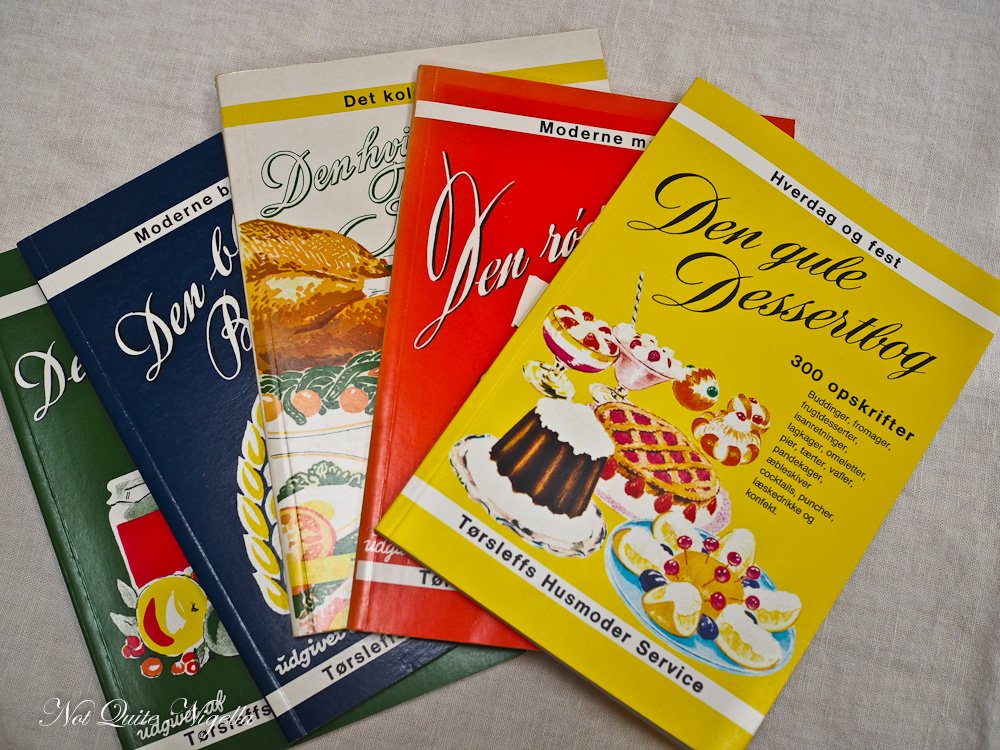 Herring is a very popular fish and is served with Smørrebrød with the onions in a bowl. On the table go dishes of red cabbage and apple, remoulade, sliced boiled eggs, bacon, danish salami, tiny peeled prawns or rejer, agurkesalat cucumber salad, gravlax or gravad laks, Leverpostej and sliced Medisterpølse sausages. Everything is portioned for easy eating and bread topping. By the time everything is laid out, Lasse the butcher arrives in time for lunch. Viggo hands him a can of Carlsberg beer (cans of Carlsberg are produced in Denmark, unlike the bottles). 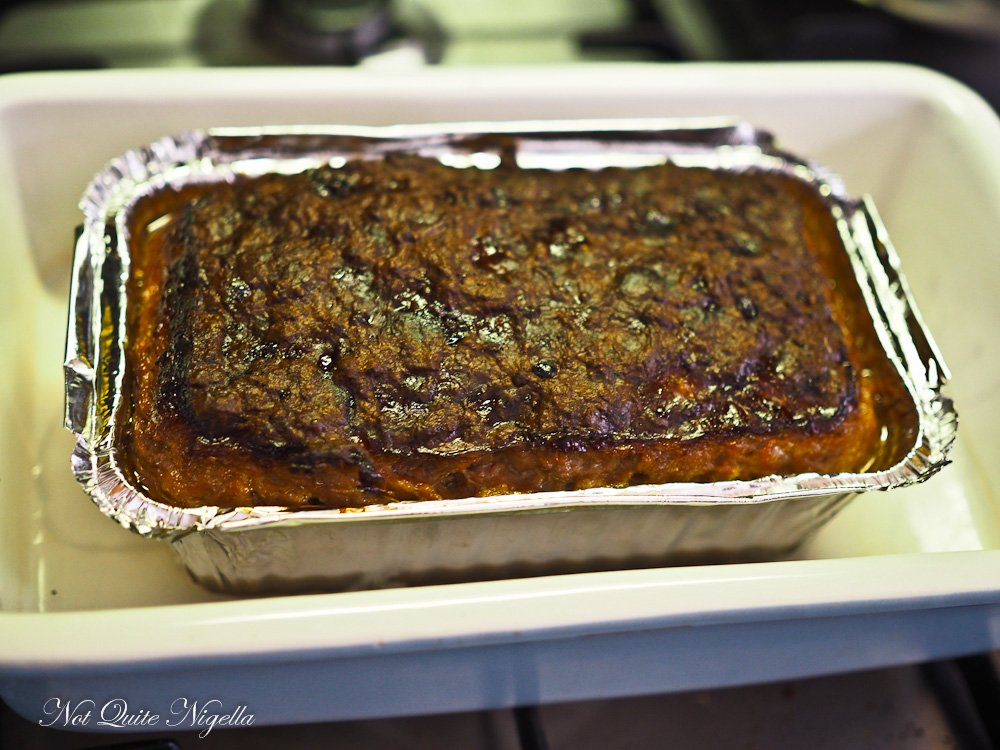 The food is accompanied by small glasses of Aquavit (water of life) served ice cold straight from the freezer. Aquavit is a toasting drink and can be downed in one gulp after yelling "skaal" and meeting the other person's eyes not once but twice. The first time is before drinking and the second time after. 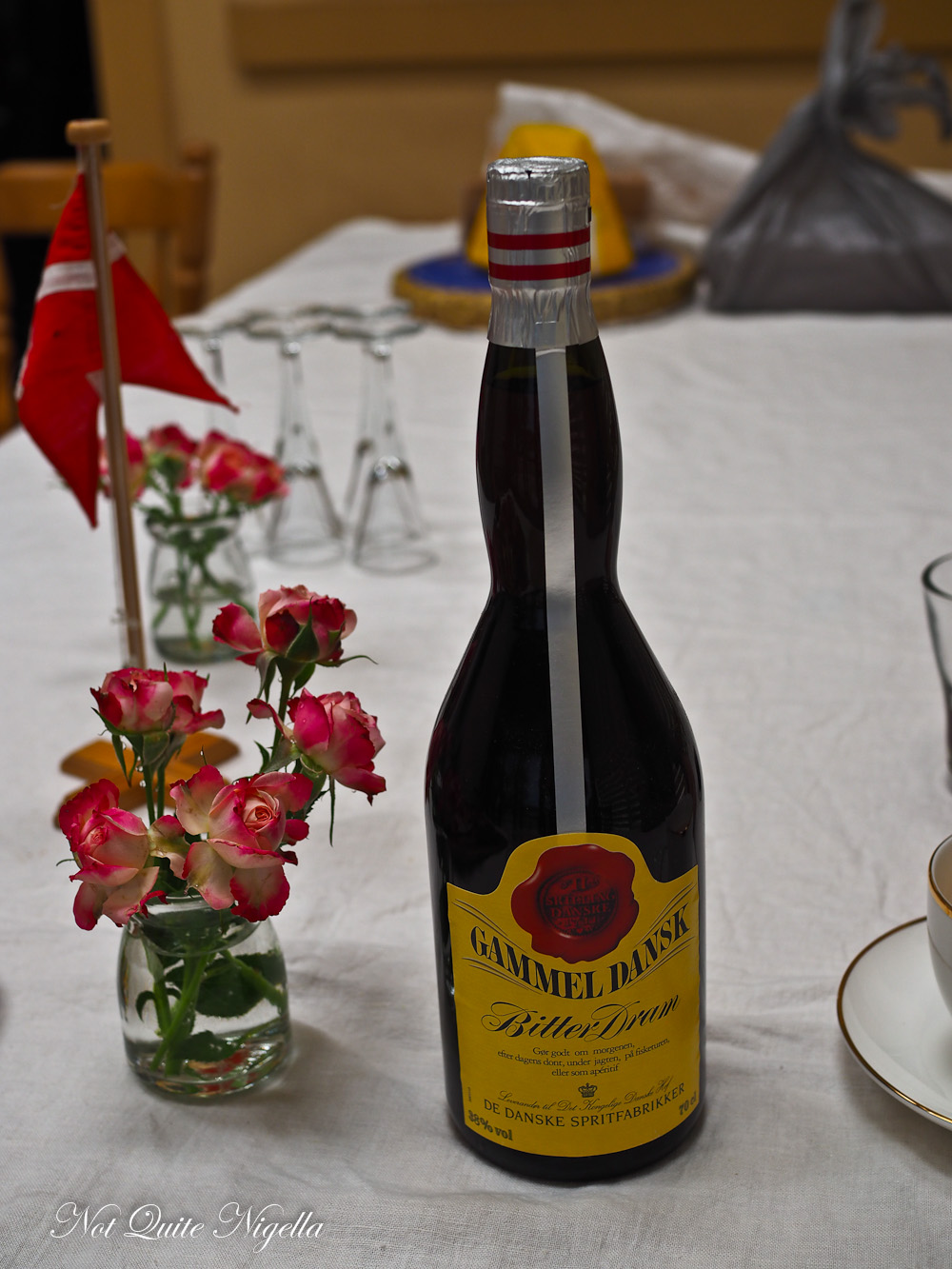 There is also Gammel Dansk (meaning Old Danish), a spirit flavoured with angelica, star anise, nutmeg, anise, ginger, laurel, yellow gentian, Seville orange and cinnamon. Viggo says, "Gammel Dansk was created to compete with Jager Meister - it is very good at clearing your sinuses when you've been out in the cold Danish weather, and is typically drunk at the start of a long weekend breakfast." It’s strong and best sipped slowly. 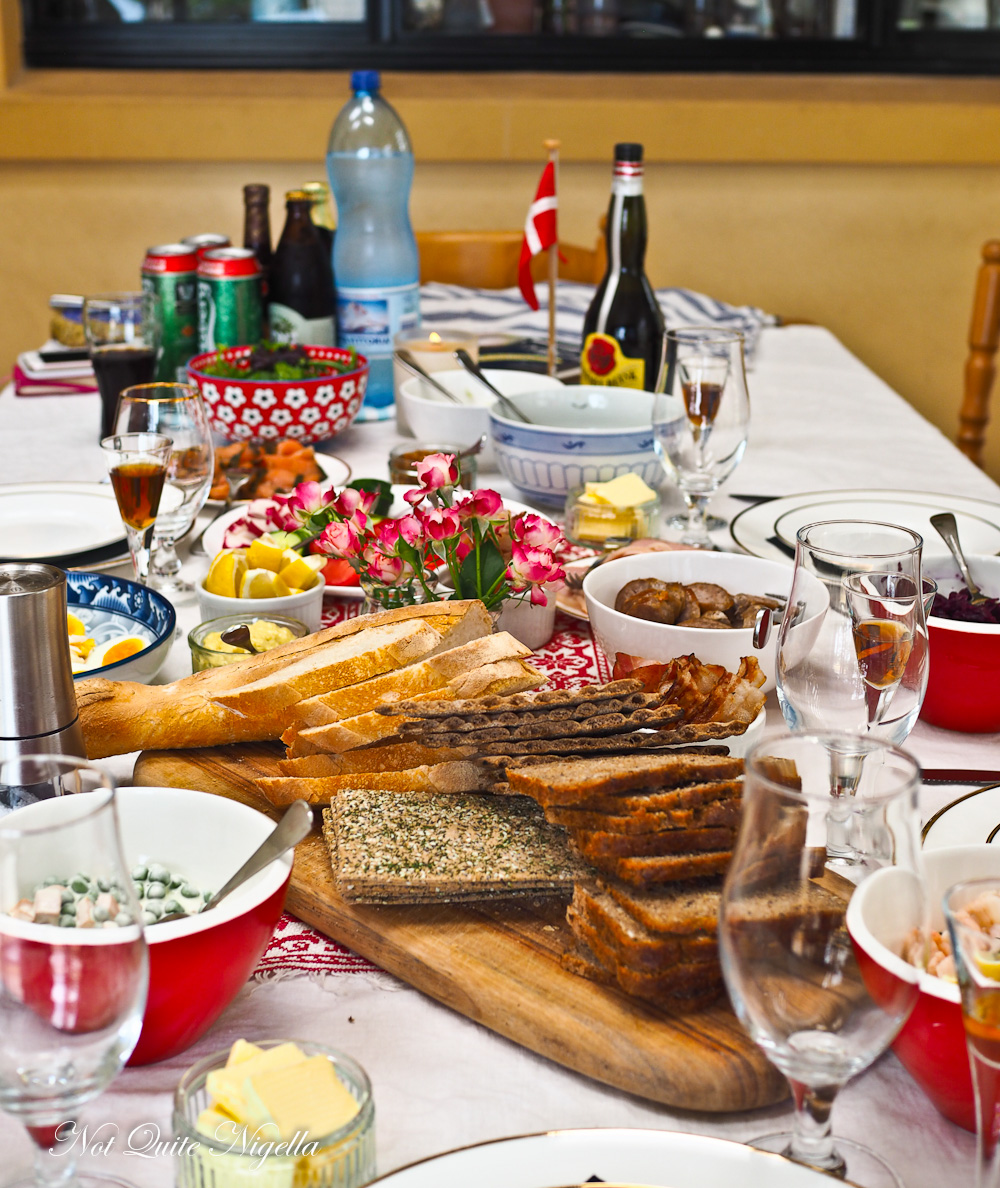 The idea behind Smørrebrød started during the 16th century using bread in place of plates which were at the time expensive. We pick whatever topping we like and eat slowly and lunches can last a few hours. All of the meat at today’s Smørrebrød is pork of some sort. This elaborate sort of meal would be put on for birthdays or celebrations. 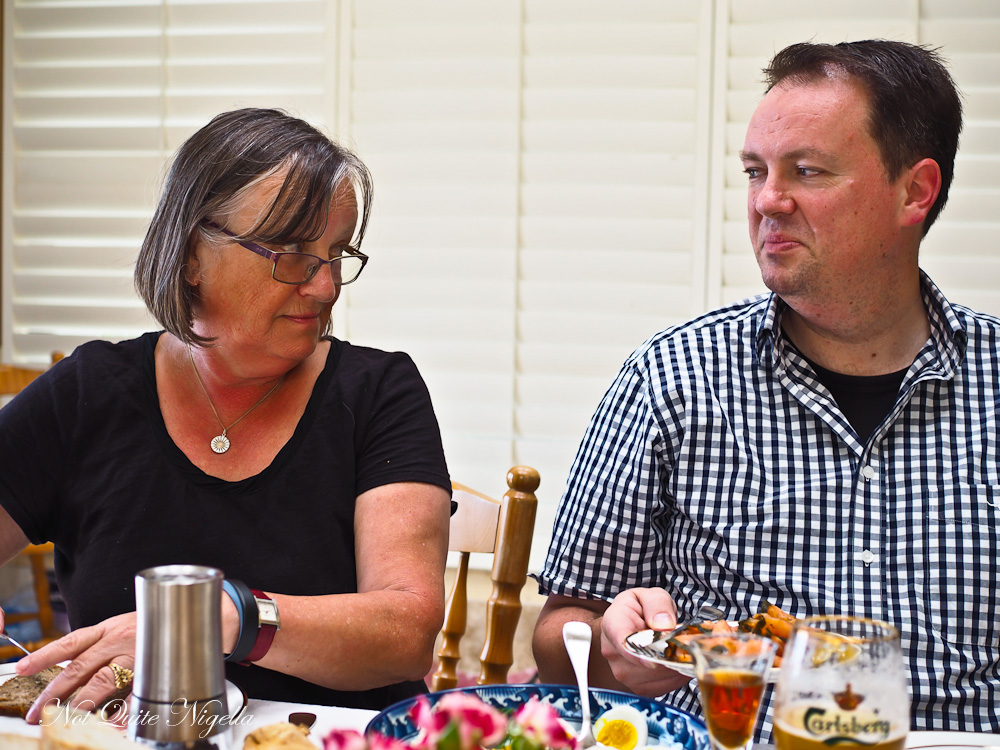 Madame Butterfly makes up one of the most well known Smørrebrød toppings called Dyrlægens natmad which means "Veterinarian's midnight snack". The name is perhaps a dry jab at dark humour. A slice of buttered rye bread is topped with corned beef or Saltkød, liver pate or Leverpostej, crispy bacon and Sky (meat aspic). Madame Butterfly adds some cucumber salad or agurkesalat on top or you can also add red onion. 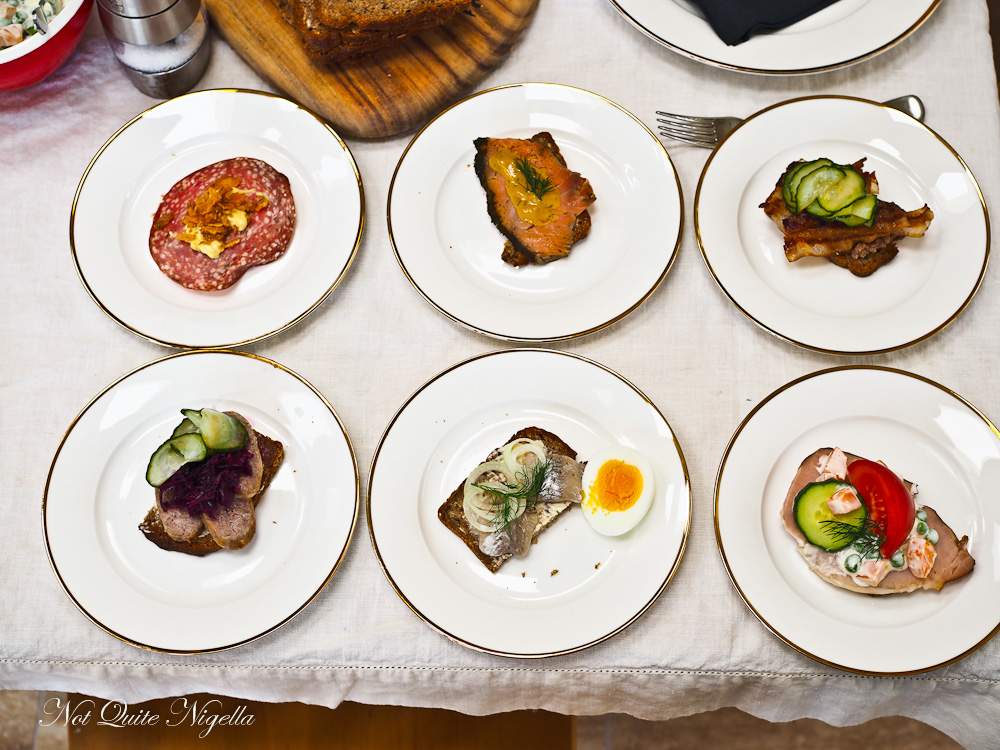 Lasse peppers our late lunch with tales of his time serving on the Queen’s Guard in his early 20's. He and Prince Frederick served around the same time - Frederick was one year older but the two became friends and the Prince has visited the Avalon store twice during trips to Sydney. 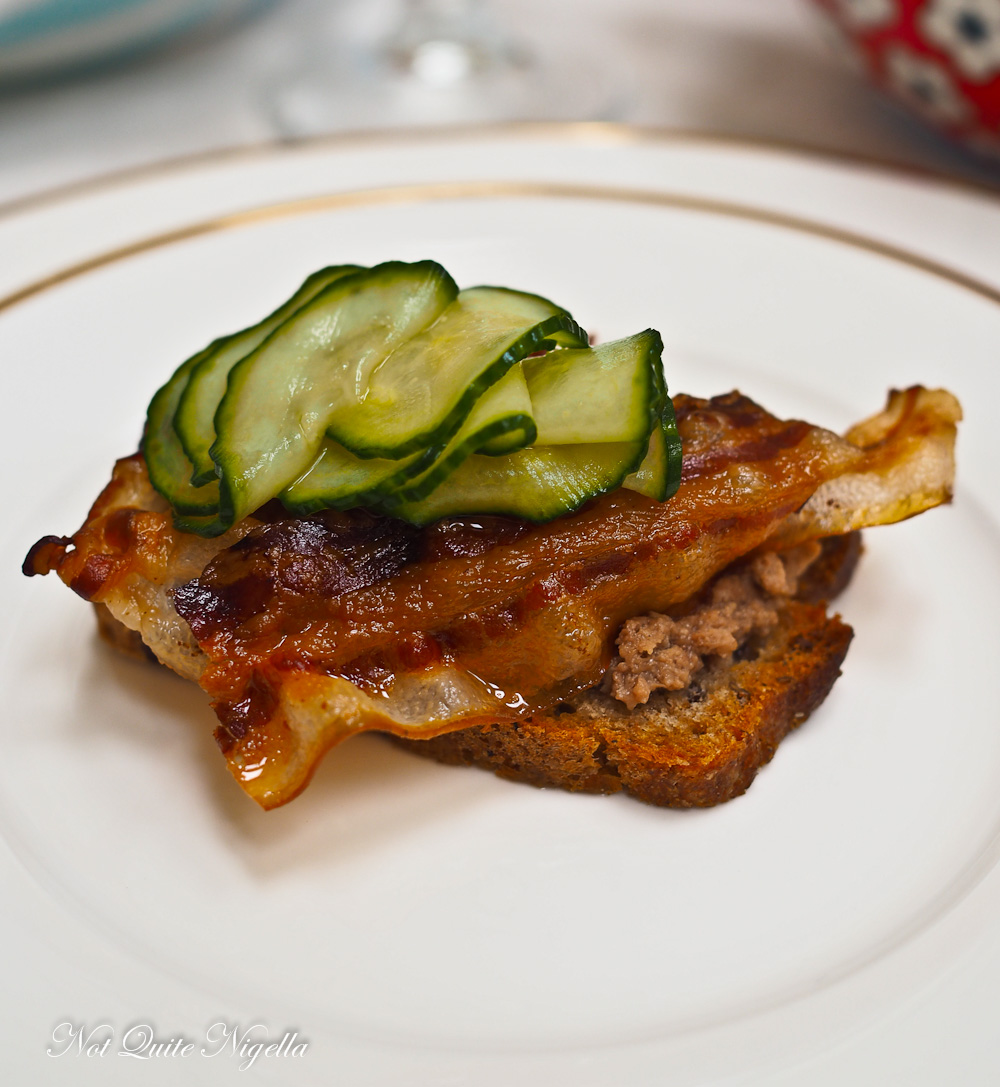 In the afternoon a kaffepunch may be served. A coin is placed in the bottom of a coffee cup and a small amount of coffee is poured in to cover the coin. Then the cup is topped up with enough Akvavit or Schnapps (Snaps in Denmark) so that the coin is visible again!

“There is one rule when you drink Akvavit,” intones Lasse. “NEVER talk politics!”

So tell me Dear Reader, what is your favourite meat if you had to have a meal with just one meat? Have you ever been to Denmark or eaten this sort of food? And do you talk politics with friends? 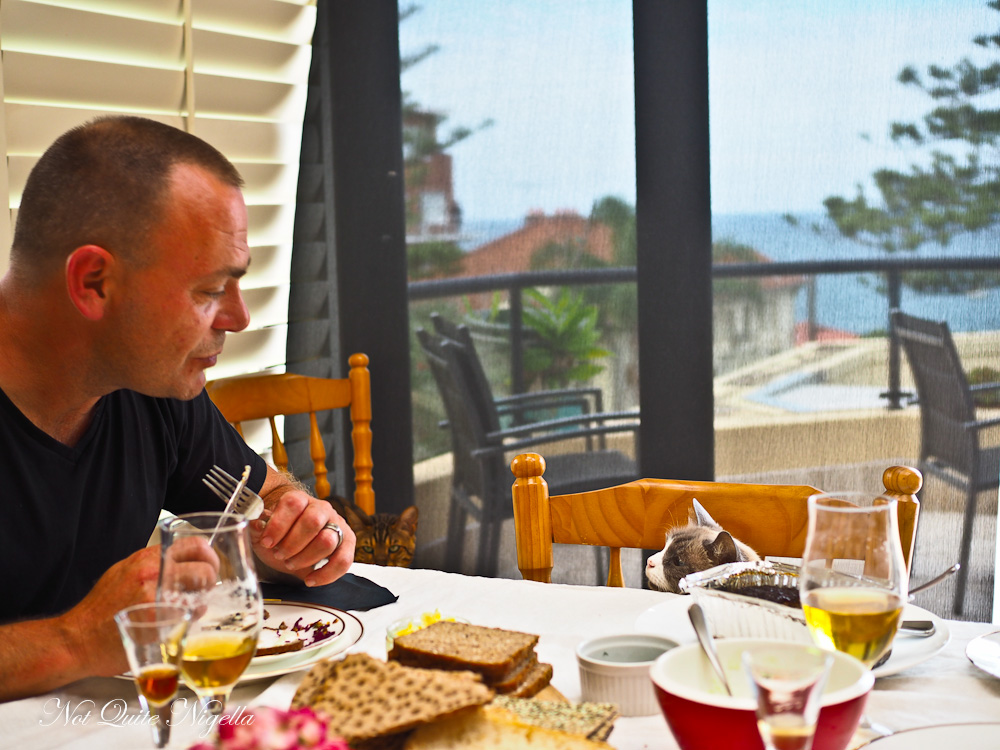