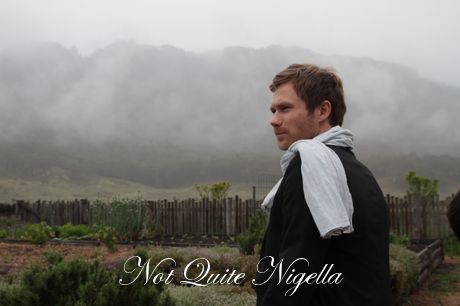 A kangaroo hops across the pathway as if on cue. He's a large, dark grey and brown beast and Danish chef and current winner of the Bocuse d'Or and the World's Best Chef Rasmus Kofoed sits up to have a look. He has been flown over from Denmark to Australia to cook for Princess Mary and Prince Frederick at an exclusive dinner on Monday night at Doltone House. But for now, he's watching an enormous kangaroo bound across the path and disappear into the grass, the last remaining inches of the head bobbing away until it disappears. 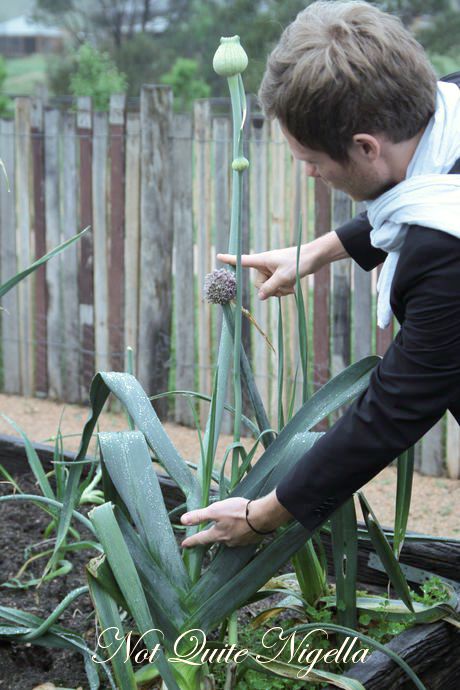 The portion of the leek that he uses

Currently Denmark has the World's Best Restaurant (Noma) and the World's Best Chef (Rasmus Kofoed). It also has more Michelin stars than many other European capital cities. So how did this compact country with a population of just over 5.5 million become the latest culinary superstar? Twenty years ago, it wasn't known for anything more than traditional Danish fare but now the smallest out of the Scandinavian countries is emerging as a culinary powerhouse. And why? Part of the reason is right before me.

Rasmus is at the Emirates Airline owned resort Wolgan Valley. This is his third visit to Australia having once lived in Sydney's Maroubra and Bondi for three months. The number of places that he has visited in Australia probably outrivals most Australian's but this trip has less of the beachside relaxation and more of the inspired perspiration-after all cooking for Danish royalty and 400 guests isn't an easy task. 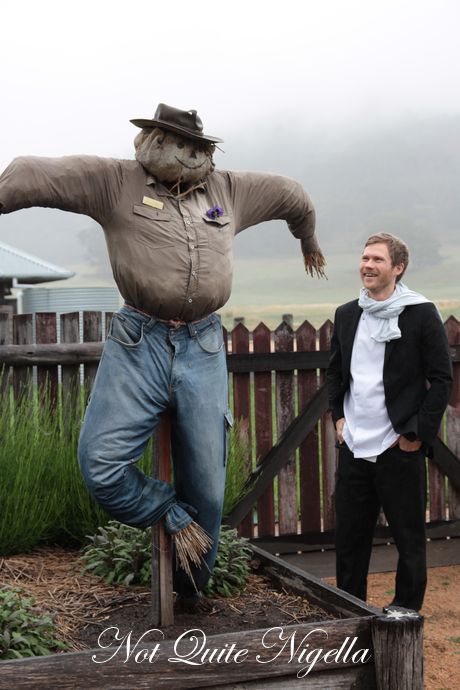 For now, he is relaxing, having landed in Sydney only two and a half days ago and he is walking around the vegetable garden near the 1832 heritage homestead which was once visited by Charles Darwin. During the height of Summer almost 90% of the vegetables that they use on the premises will come from the gardens here. 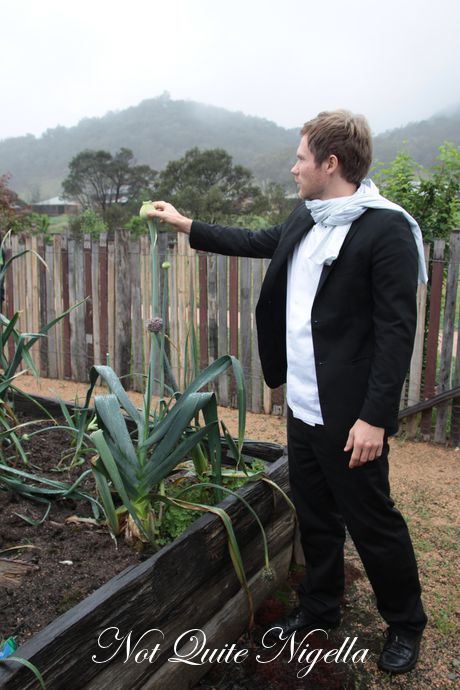 What is interesting is seeing our produce through an outsider's eyes. Rasmus looks at some leeks and asks Wolgan Valley sous chef Sharon if she uses the green parts which we often don't use. "They're the best part of the leek" he says and I ask him how he uses it and he says that it is used rather much like asparagus. He picks at the various plants and walks around tasting them. Wolgan Valley GM Joost Heymeijer offers him some chocolate mint and he takes a sniff. He tells me that they do have that in Denmark but they tend to treat ingredients differently. 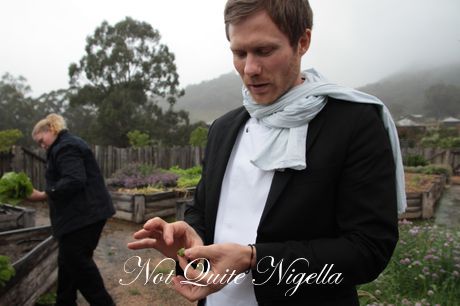 Showing the size of the green strawberries in Denmark 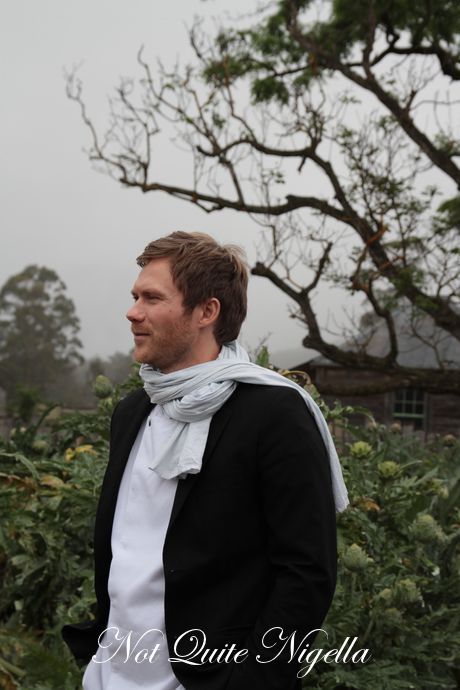 Born to a vegetarian mother he has never wanted to be anything but a chef. He started cooking at age 12 originally doing so "because as my body was growing my body needed meat". As his mother wouldn't cook it, he started cooking meat for himself. Interestingly when he plans dishes, he starts with the vegetables first with the meat and fish as the secondary consideration. And today when he eats at home with his girlfriend, he eats vegetarian food.

He still maintains Danish traditions like pickling berries and vegetables but gives them a modern interpretation such as his "luxury porridge", a take on everyday porridge. He presents them at Geranium, his 45 seater restaurant where there are two menus offered: a 15 course degustation and a vegetarian version the former menu costing around 1000 krone (about $180AUD at time of publish). The Geranium kitchen was all designed by Rasmus and features a glass front so that diners can be only two metres away from the kitchen. 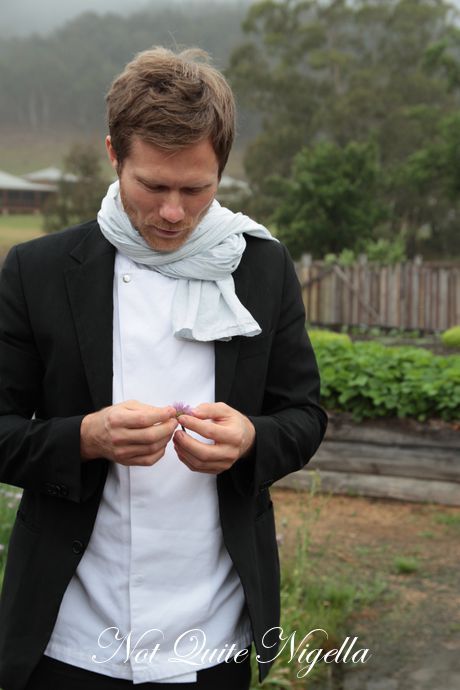 The Bocuse d'Or, named after legendary French chef Paul Bocuse is held in Lyon and chefs from countries all over the world compete in this international competition, dubbed the culinary Olympics was a medal that he has desired for a long time and trained many years for. He has been to the podium three times in total, first for a bronze, then for a silver and then in January this year to collect the gold. 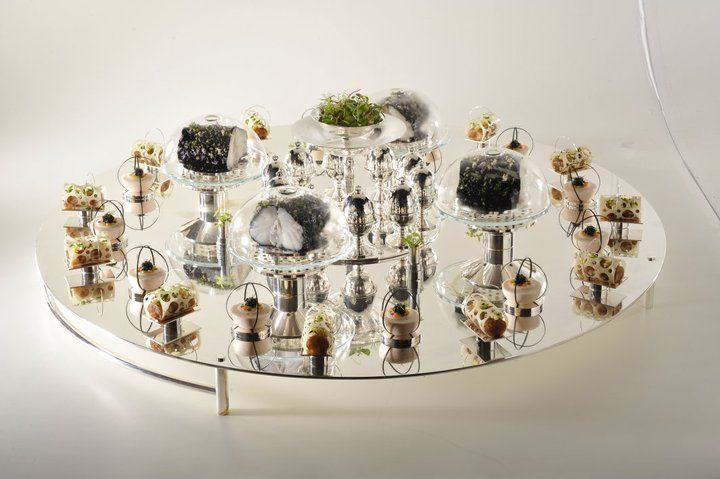 The fish dish that won him the gold at the Bocuse d'Or. Photo credit: Philly Market Cafe

Each chef must present a meat and a fish dish and they are given the key mandatory ingredients six months ahead of time. I ask him how much he practised for it and he says resolutely "every single day". Chefs have five hours to prepare the fish dish and an additional 30 minutes to prepare the meat dish and this is all done in front of a crowd of 4,000 spectators and over 1,000 journalists. It must be presented on a silver platter to serve twelve and then individually plated for each of the 24 judges which for Rasmus included Thomas Keller and Daniel Boulud and past judges have included Heston Blumenthal and Ferran Adria. Twenty points are awarded for presentation and forty points for taste. "I'm a fan of competing in sport" he says likening the Bocuse d'Or to a sporting game but also calling the gruelling training for the event a "Bocuse d'Or Prison". 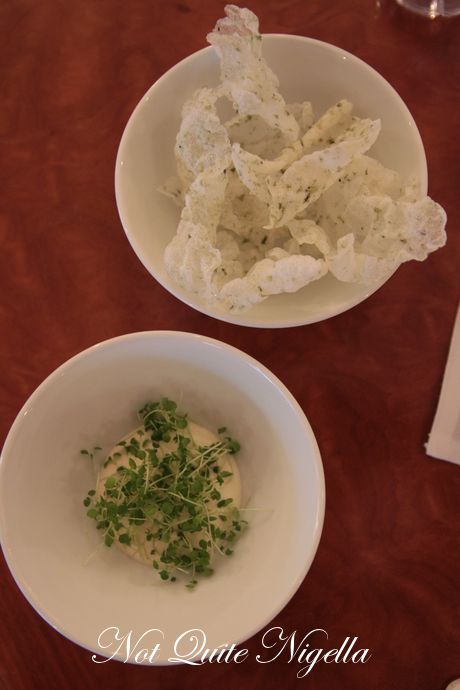 The only piece missing is that there is no Danish restaurant of this calibre in Sydney and the only way to try this food is to visit Denmark. Emirates Airline are also currently in talks with Rasmus to provide food for both in flight business and first class meals and for the business and first class lounges now that there are direct flights from Australia to Copenhagen. They will all be done in the style of the food in his restaurant Geranium and we try two dishes, the chips made from potato starch which are gossamer thin and crunchy and melt in the mouth and are served with a seaweed and yogurt mayonnaise (suddenly and quite tragically, chips and dip will never be the same). He wanted to bring over some ramsons or wild garlic for this dish but customs wouldn't allow it to be brought into the country. 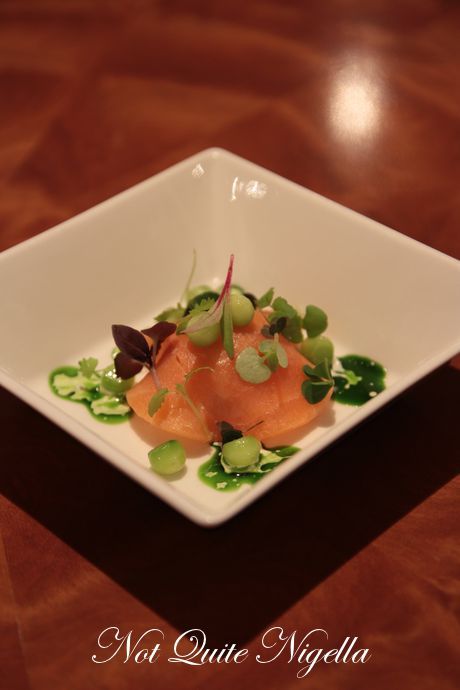 We also try his Greenland spidercrab with smoked salmon, pickled cucumber, herbs that he foraged from the Botanical Gardens, sorrel cream with horseradish juice and parsley oil. The dish is clean and with an excellent balance of flavours and the sweet crab never being overpowered by the other ingredients including the lightly smoked salmon. To Rasmus, his style of food emphasises freshness. "In a Nordic kitchen  it is very important so that you will feel well, not that you want to die or sleep (afterwards)." 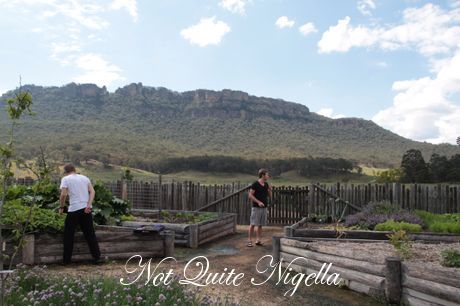 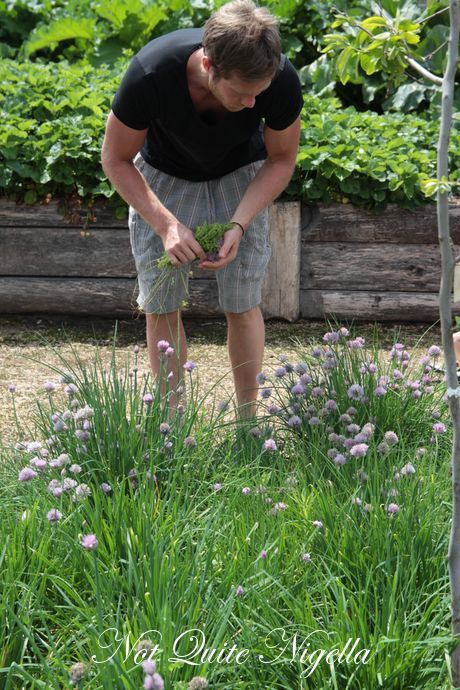 'The next day Rasmus and his assistant chef Frederick go back down to the vegetable garden to pick some sage, garlic flowers and cornflowers. These beautifully coloured adornments will make their way onto plates garnish and flavour his food over the next few days. He hands me a piece of sorrel to taste. 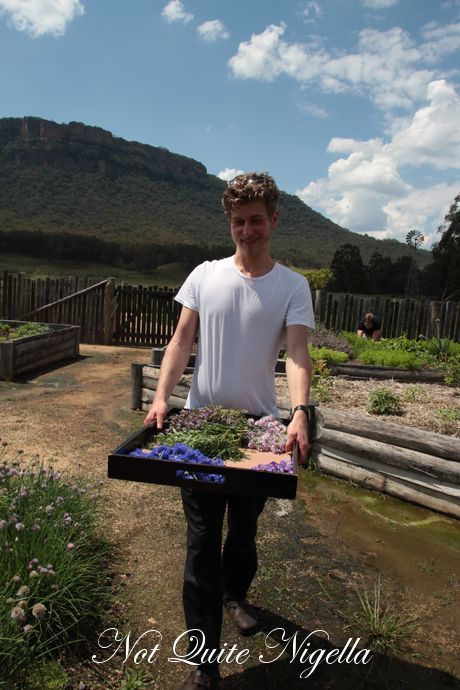 On our way back to Sydney we discuss his meal at Sepia and an upcoming one at Quay that evening and while in Melbourne he is scheduled to visit Vue de Monde and Attica. I ask him about the food that he serves in his restaurant and he tells us how he steers clear of items like foie gras because he of the way the animals are treated and says that he can find flavour in other items. He also likes using many parts of an animal and one item that he cooks is a fish tongue. Large cod often have tongues a couple of inches long and he simply pan fries the tongue lightly in butter. 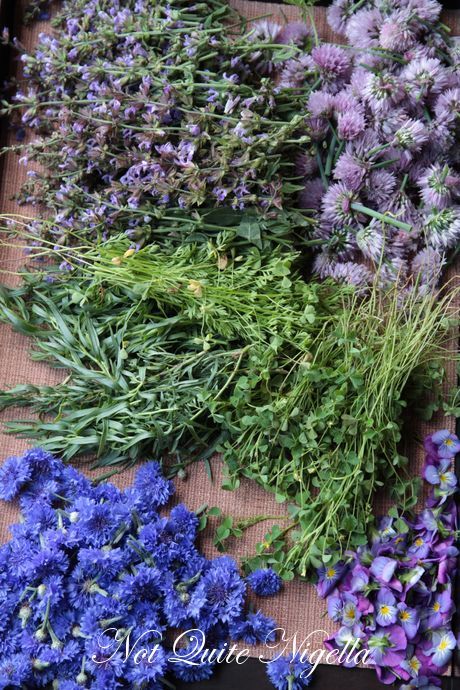 A couple of days later I find myself in possession of a coveted media pass at the Sofitel where Rasmus will cook with Princess Mary of Denmark who is here in Australia to promote Denmark with Rasmus along with Aria's Matt Moran. But Matt is doing a rather good job of promoting Denmark himself calling it "the hottest country in the world for food" before quickly adding "apart from Sydney." 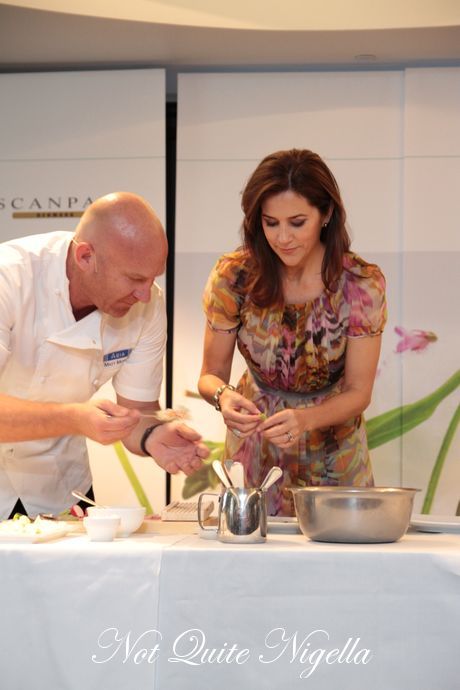 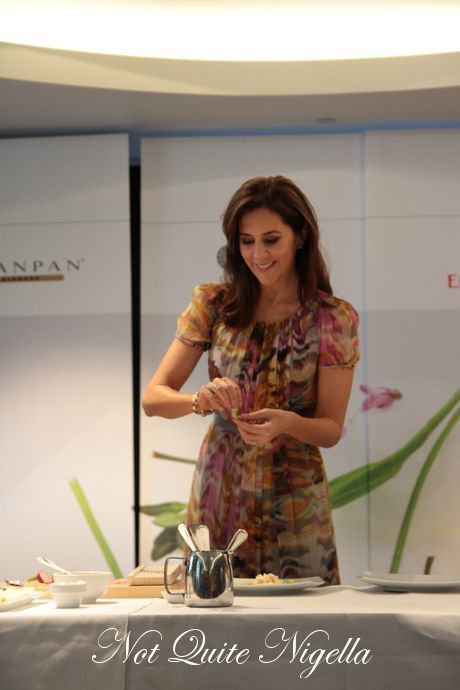 Everyone is eager to find out what it is about Denmark that has sparked this food revolution. Apparently the climate is one thing, the cool, pristine weather produces fine ingredients (Lurpak butter, Castello cheese are two items that we see here). Also the hallmarks of modern Danish cuisine are clean, simple flavours, an excellent sense of balance, seasons, terroir or a sense of time and place with local ingredients.  The design is another reason with international designers like Arne Jacobsen, Finn Juhl and Hans Wegner. Rasmus believes that the success of some chefs including Rene Redzepi brings about a younger generation of proud Danes that want to advance Danish cuisine. 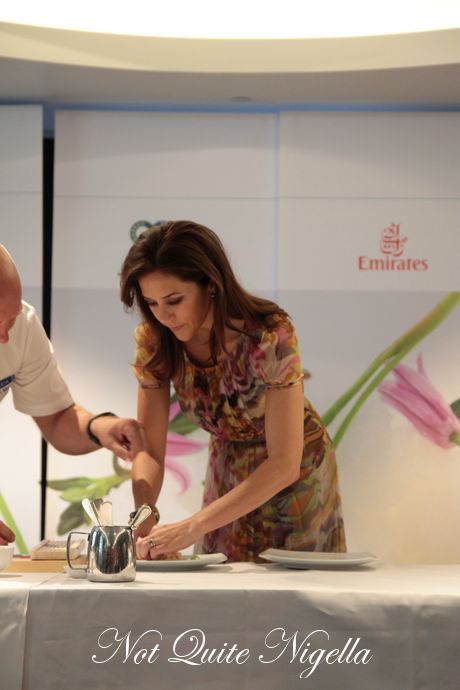 He explains that his food is simple and tells us that there won't be a lot of colours in a dish as he "wants the flavours and aroma to speak". And then a special guest arrives. It is Princess Mary who is brought onto the stage to assist. And if you're as curious to see what she would be wearing as I was, she wears a floral dress with a ribbon belt and patent nude pumps. 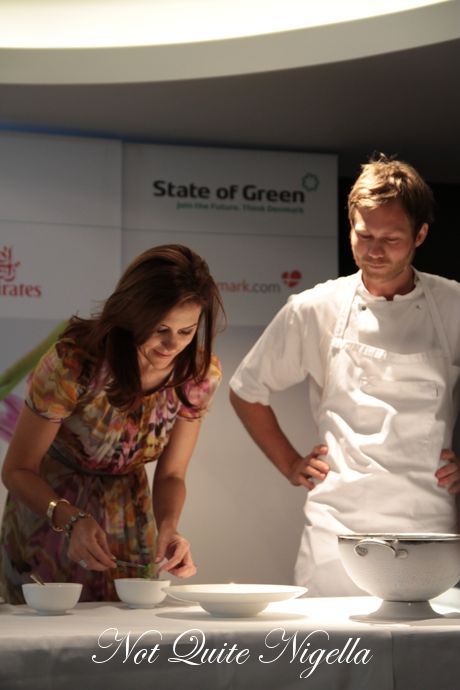 After helping out Matt Moran with his salad of spanner crab with sauce nero and ginger gel Princess Mary helps out with dessert which is Rasmus's course. In some press interviews she speaks with a slight Danish accent but today she speaks with an Australian accent that is so disconcertingly normal that I have to do a double take to check that it is her speaking and not someone in the audience! Matt asks her if her hands are clean and she explains that perhaps they may not be as she has been shaking a lot of hands this morning. 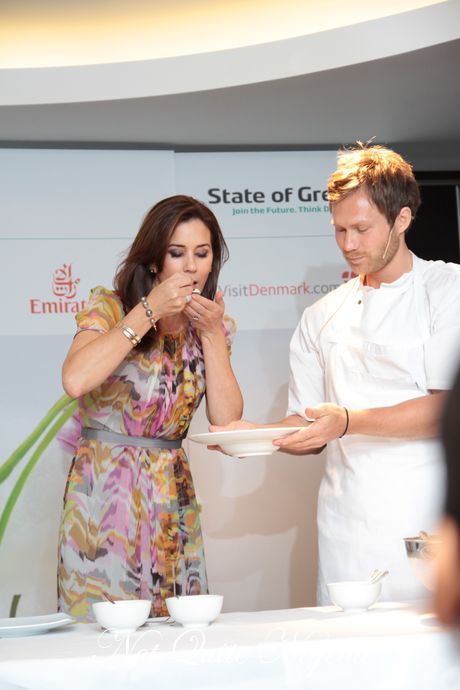 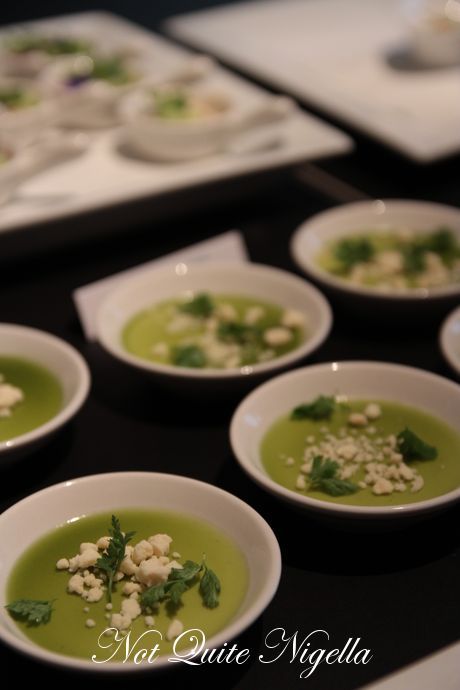 Rasmus's dish is a white chocolate dessert which he suggests that we call "Bright Green" is an ambrosial concoction with the sweetness of white chocolate balanced with flavours of chervil, freshly squeeze green apples, cucumber and celery granita. "White chocolate loves salt" Rasmus says and sought to create a light dessert as this could be the 15th dish for the diner. It is considered to be his most popular dessert ever. We are lucky enough to taste it and it is divine-a wobbly white chocolate base with a thin, green top layer, again it is the balance of flavours and contrast of textures.

Oh and apparently he skateboards too. These Danes are a surprise, watch out for them ;)

So tell me Dear Reader, which country would you like to visit for the food? And has a country ever surprised you with their food (either pleasantly or unpleasantly)? And have you been following Princess Mary's visit? 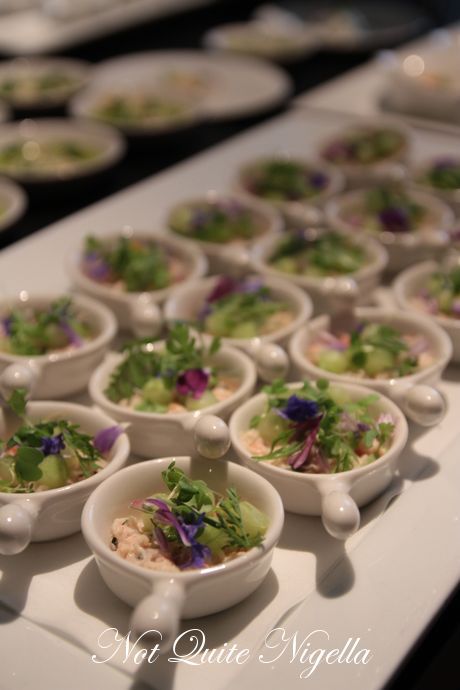 NQN visited Wolgan Valley as a guest of Emirates Airline