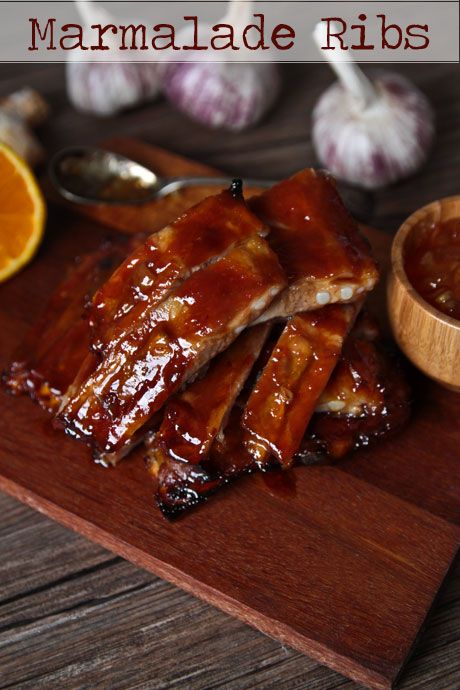 Although my parents are usually quiet and relatively well behaved there are times when their eccentricities come out. Like when my father first interacted with Aura, Mr NQN's new 14 month old niece. Whenever small children are around he generally pays them no attention (sometimes he does this with adults too) but he was faced with baby Aura and forced to interact with her, if only for a moment.

Adults can play with a child one of several ways. See if you can choose the way generally not recommended to interact with a child.

Step 3 - Threaten with planting your palm on their face

If you chose number 3 yes that's the one my dad chose. He means well but he is just not a kid person and when he lunged  at her face with an outstretched palm she reacted as you would expect - with a genuine "W.T.F." face. Mr NQN laughed and recalled the story to me and then added "I guess you didn't turn out too badly after all, considering!" 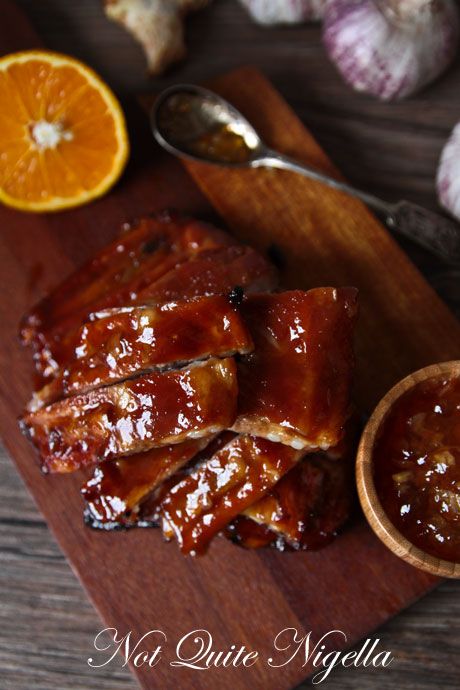 Well these ribs were a recipe that worked out all things considering. This past Monday felt like the hottest day of summer in Sydney and with a lack of air conditioning I didn't want to turn on the oven at all. I was frantically busy having just come back from a trip and had done three loads of washing which had all dried within an hour. But these ribs needed making and I was out of tricks up my sleeve. So I looked at the stash of items that I was recently sent and my eye fell upon the blood orange marmalade from Beerenberg and thought that combining the tart sweetness of the marmalade with the pork ribs would be ideal. There were marmalade rib recipes out there already and so I set about doing my own. I thought that I was out of ginger but luckily a fishing expedition in my freezer yielded some pieces stashed away in case of emergency. And it was with reluctance that I turned the oven on for the hour that these needed (in between soaking in a cold water tub of water).

So what were they like? They were marvellously good with the sweetness never overpowering as we used marmalade rather than a jam but the tartness and sweetness mimicked a barbecue sauce. There were Asian flavours from the ginger and soy and we soon forgot the heat when we were eating these which I never really wanted to end. The flavour permeated the ribs very nicely indeed and this was after only marinating these for an hour!

So tell me Dear Reader, are you good with kids? And do you turn on the oven less in hot weather? 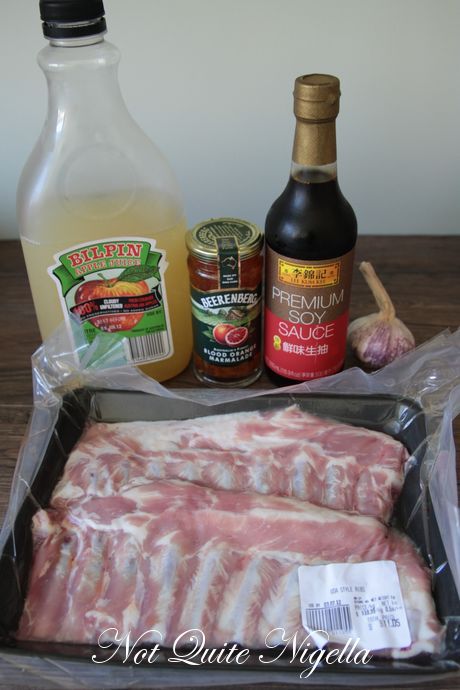 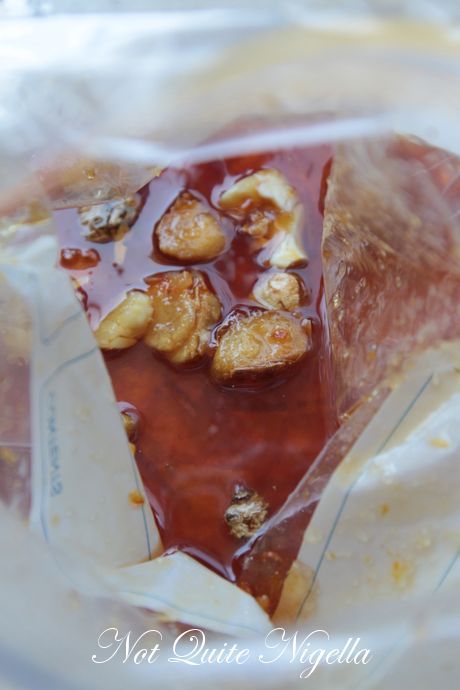 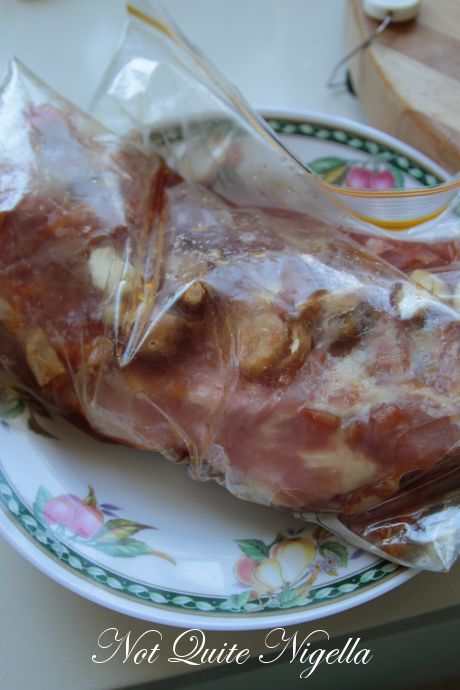 Step 1 - In a ziplock bag place the soy sauce, marmalade, juice, garlic and ginger and massage the bag to combine the ingredients and break up the marmalade. Place the ribs in the bag and marinate in the fridge for at least 1 hour (or overnight) turning the bag over once or twice to distribute the marinade. 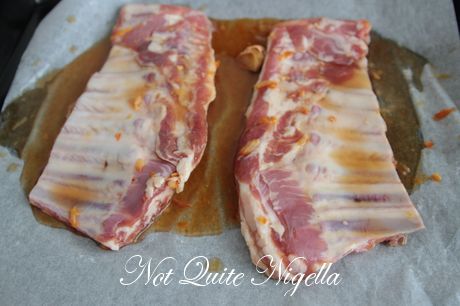 Place the ribs meat side down

Step 2 - Preheat oven to 180C/350F fan forced and line a baking tray with foil-this will get sticky and you definitely want to do a better job than I did of lining it. Tip the contents of the ziplock bag including the sauce and ginger and garlic bits onto the baking tray and bake the ribs meat side down for 30 minutes uncovered. Then turn down the oven to 170C/338F and remove the ribs from the oven. 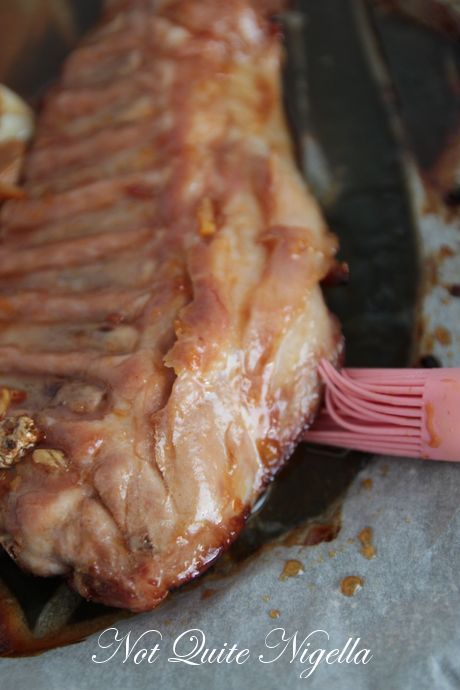 After turning over to meat side up and basting 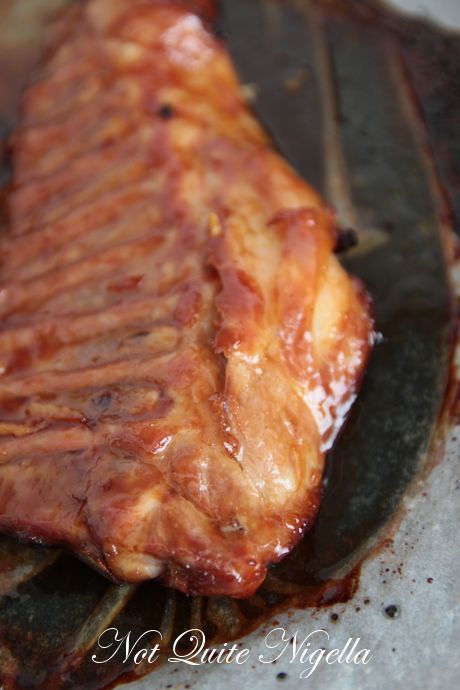 Just 10 minutes after the photo above and a second basting

Step 3 - Turn over so that the meat side is facing upwards and then baste with the marinade. The marinade around the edges will have started to caramelise so use this and it gives a nice glaze. Place back in the oven for another 25 minutes making sure to baste every ten minutes. This helps to build up a lovely glaze and to add flavour, especially if you haven't had time to marinate it overnight. Slice and serve. 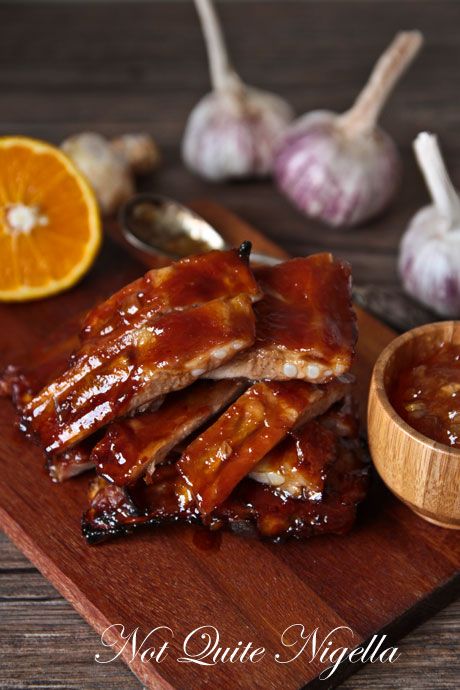