Getting Our Ramen on at Manpuku, Kingsford 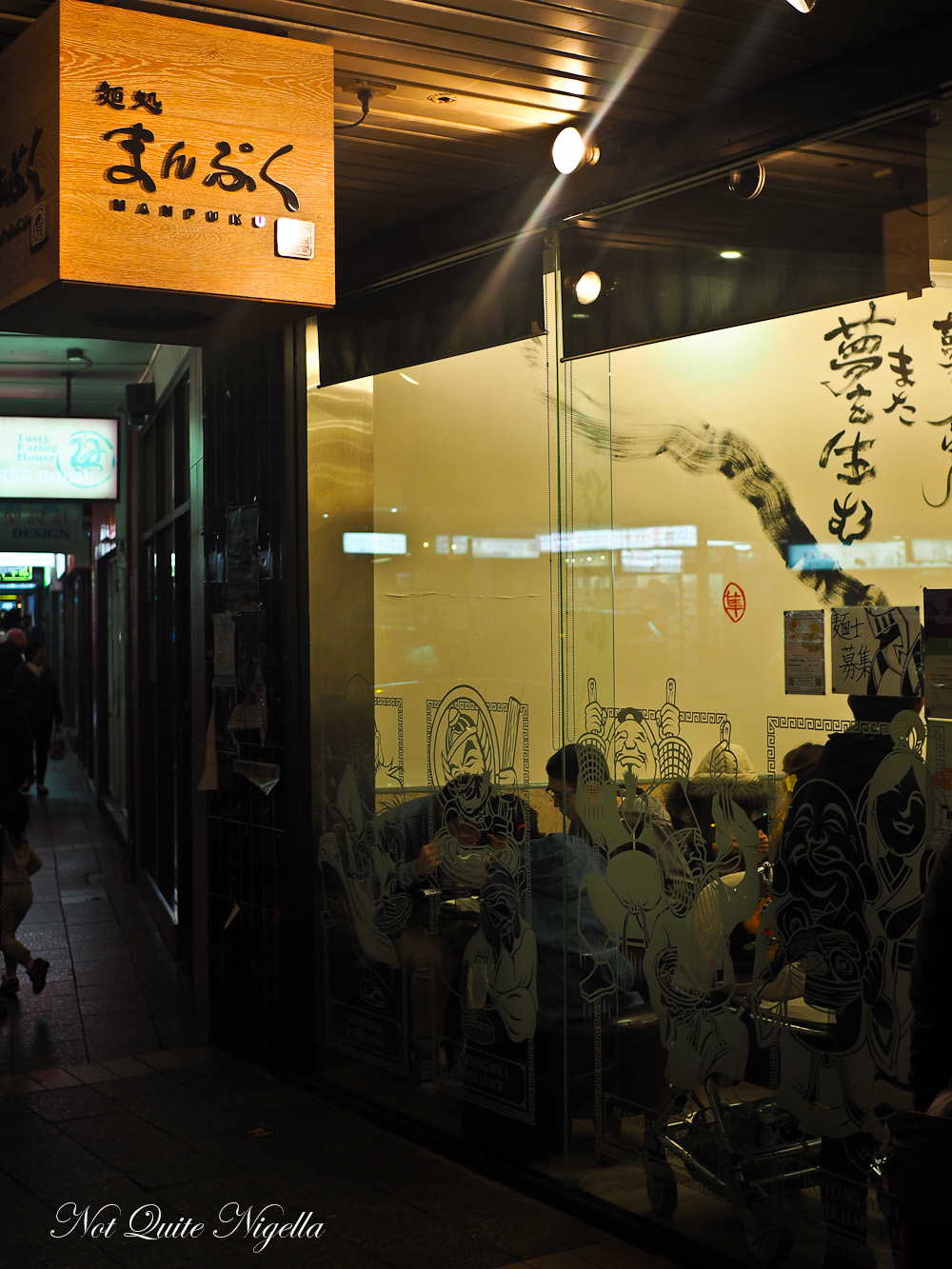 "What do you want to order?" I ask my father. We're sitting down at Manpuku, a ramen place on Anzac Parade in Kingsford. 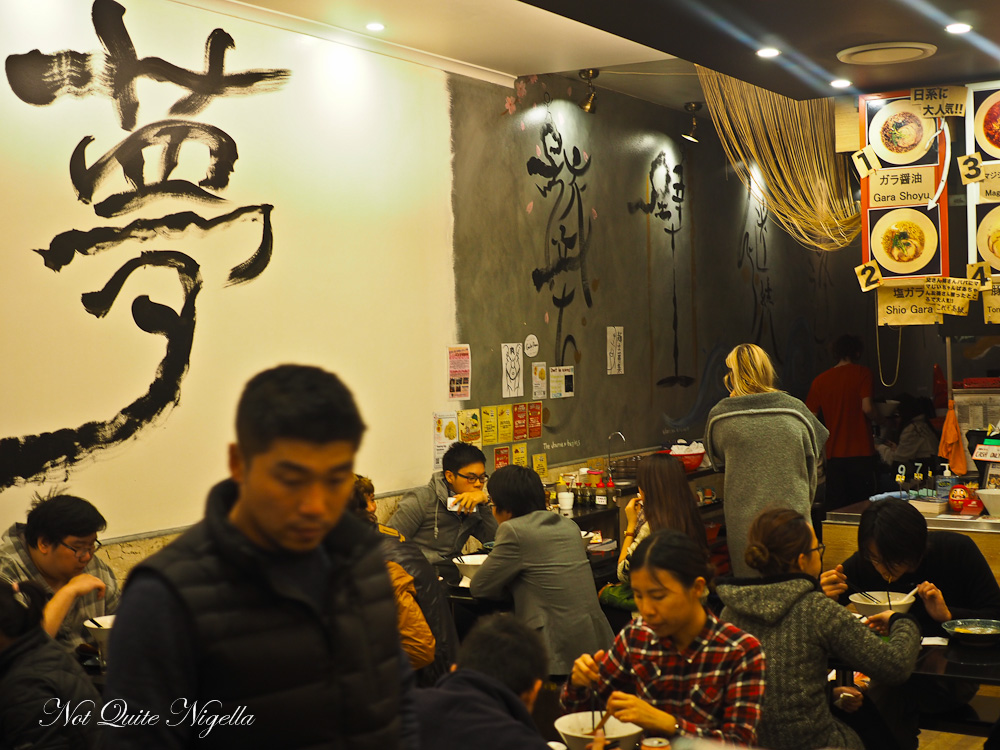 "This one," he says decisively. "So cheap!" he says impressed, unaware that he has chosen the additional ramen toppings, all around $1-$2 each. "You can't just order those," we explain to him. "It's ok," he whispers, "I've got rice at home..." 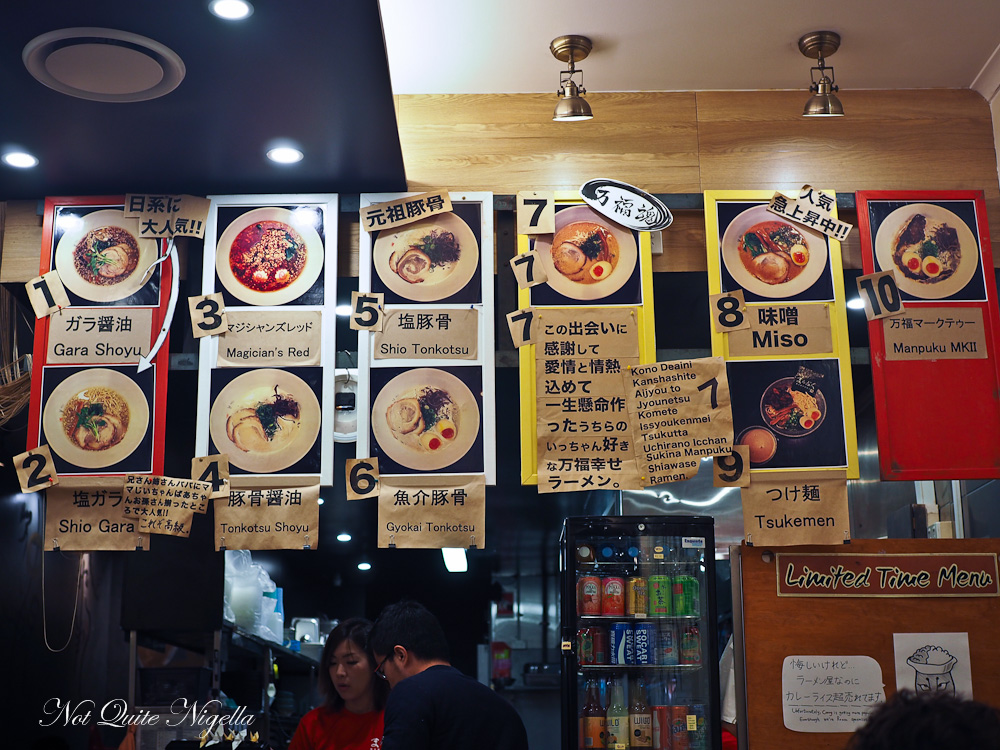 Manpuku ramen is a simple ramen place, apparently slightly chafed that their curry has become so popular (a quirky sort of home made sign references this issue) but the main deal here is indeed ramen. Several different kinds in fact. The ramen is house made and comes with a variety of soups from shio (salt), shoyu, tonkotsu and their house specialty the miso pork and chicken broth. We watch people slurping from big bowls of ramen-some in groups, some sit by themselves. One man's eats while his eyes and fingers never leave his mobile phone while a little girl stares wide eyed with a cascade of ramen noodles coming out of her mouth. 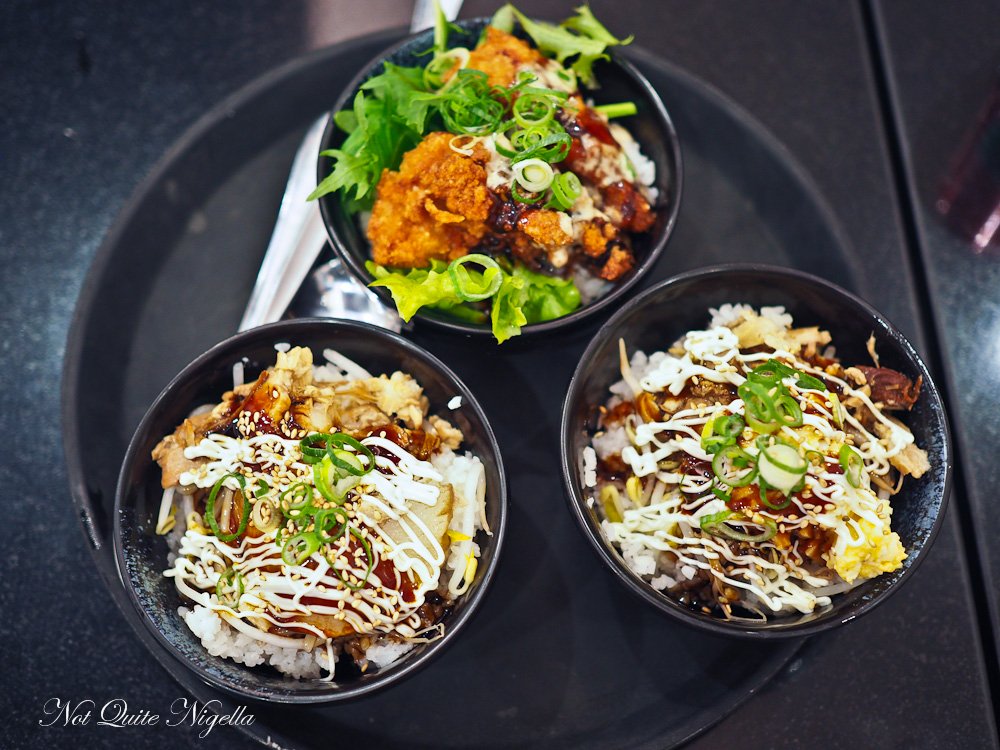 We start with some side dishes because my father can't have a meal without rice. There are three small bowls available with different toppings: the Manpuku rice with a topping of pork belly, boiled egg and mayonnaise which isn't terrible although it is a little strange. Then there's the karaage chicken with crunchy fried chicken, sesame sauce and salad on rice which isn't bad. And then there's char siu rice which is definitely the best out of the lot with saucy, soft pieces of char siu with plenty of sauce and flavour. We hone in on it and even my rice fussy father enjoys the soft rice. "Do you remember the time you had to leave Japan because you didn't like the rice there?" I ask him. "No, not at all," he says while my mother guffaws. She remembers it all too well. 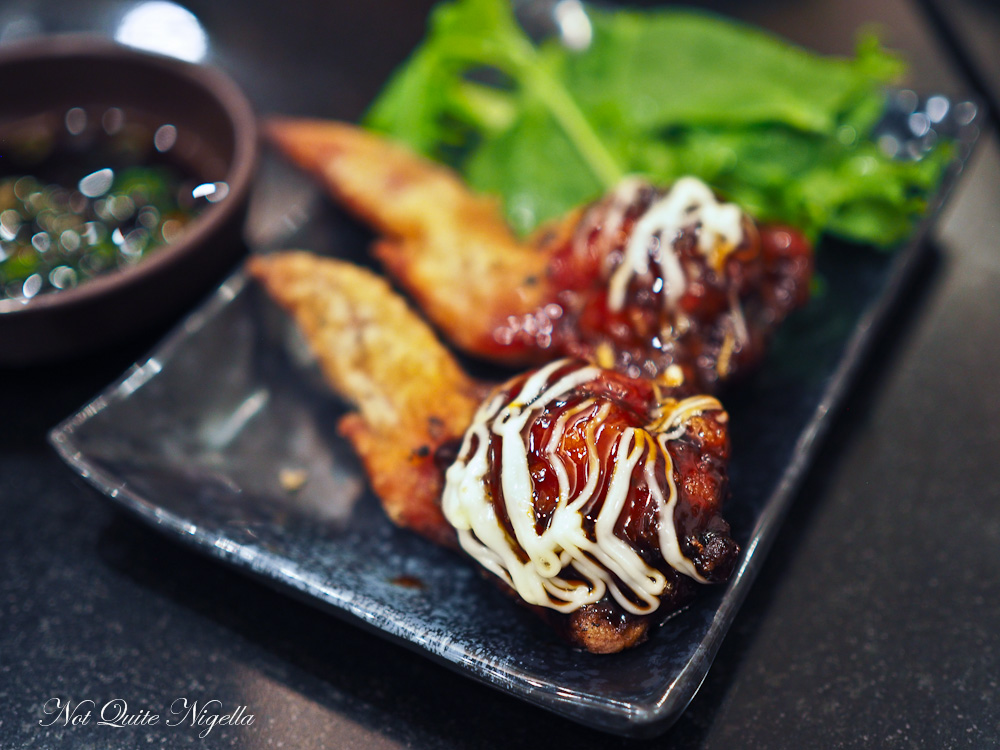 The chicken wing gyozas come two to a serve and they're just one part of the wing. They're stuffed with a pork gyoza filling in the fattest part of the wing and deep fried and glazed with a teriyaki style sauce and mayonnaise that is very sweet, perhaps a bit too sweet for the chicken as all I can taste is the sauce. 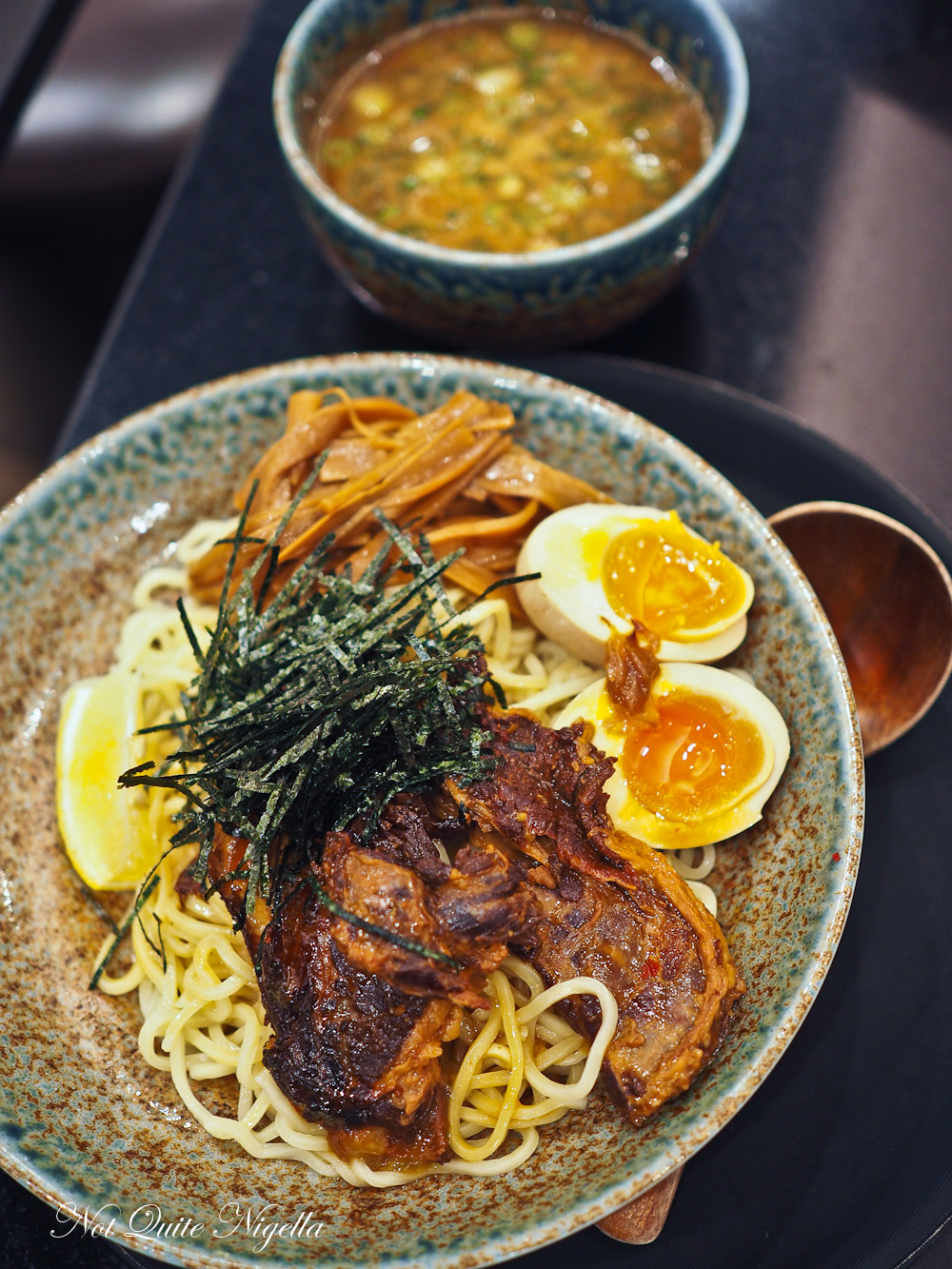 The ramens come out in quick succession and we start with the mildest. My mother likes the tsukumen one as it has more meat in it and this is a dipping ramen with a soy based tonktosu sour dipping soup. I'm not as huge a fan of the dipping soup as Mr NQN. It does have a distinctly fishy aroma to it. The noodles come out dry and arranged with soft pork ribs, bamboo shoot, nitamago, seaweed, shallots, gyokai powder and ramen noodles. 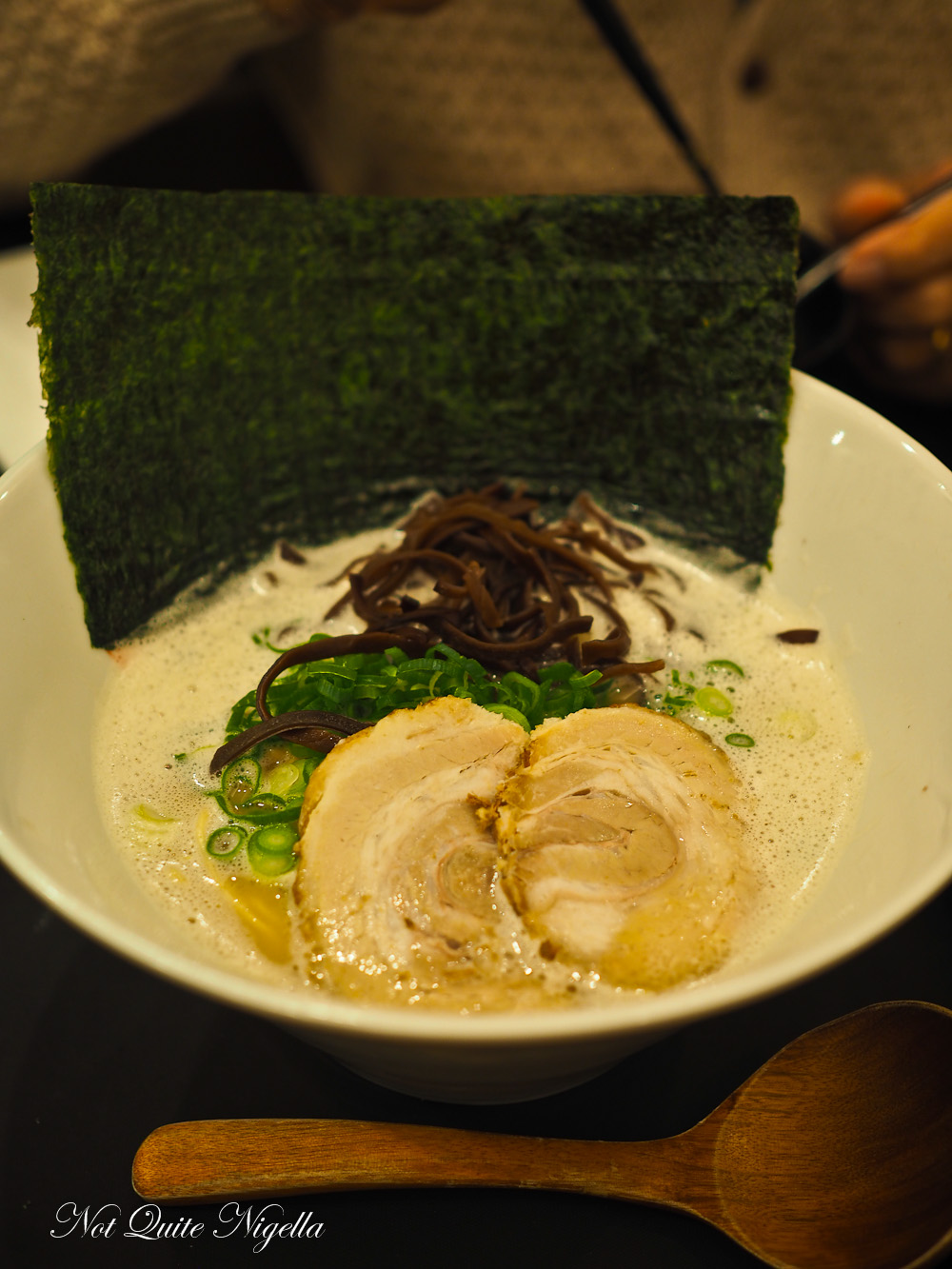 The tonkotsu shoyu is the richest offering with a soy based pork broth with pork belly slices, mushrooms, shallots, seaweed and house made noodles. It's rich and creamy but not as heavy as other tonkotsu broths that I have had where you can't get past a quarter of the stock. I particularly like this when it has a bit of the "chilli bomb" added to it. This is a topping that you can order separately that is basically a ball of chilli paste. It isn't overly hot and looks much scarier than it is. The noodles in this soup are thinner and slightly paler than the noodles in the other soups and we prefer the noodles in the other ones although there was no indication that they were different noodles from looking at the menu. 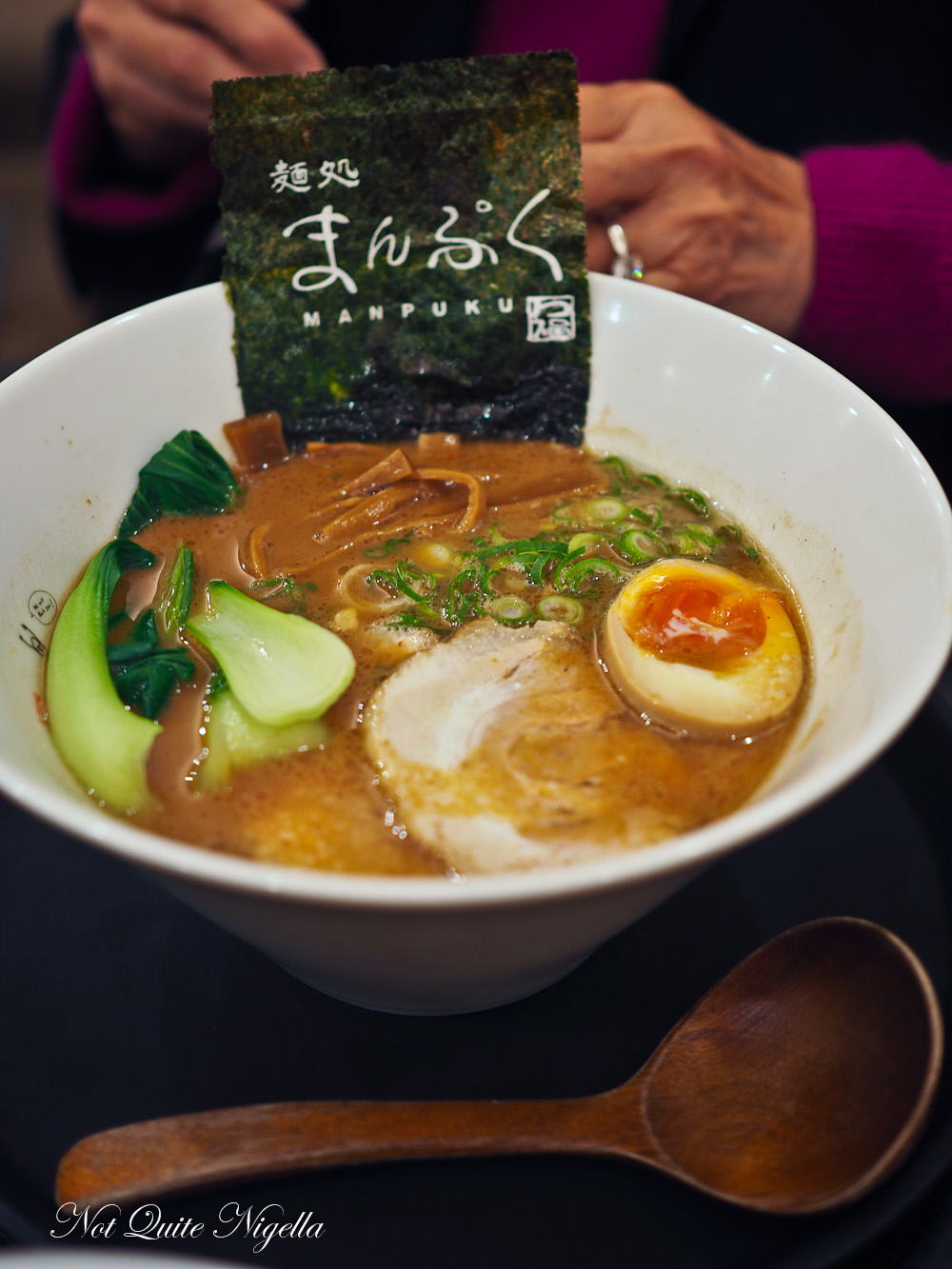 It's a big call to describe something as, "a delicious miso flavour you're unlikely to encounter anywhere else in the Southern Hemisphere," but hey the menu says just that. And we have to say that this broth, a mixture with pork and chicken stock is our favourite. For starters it's gloriously smooth with just the right amount of saltiness and never too much miso. It's very well balanced. 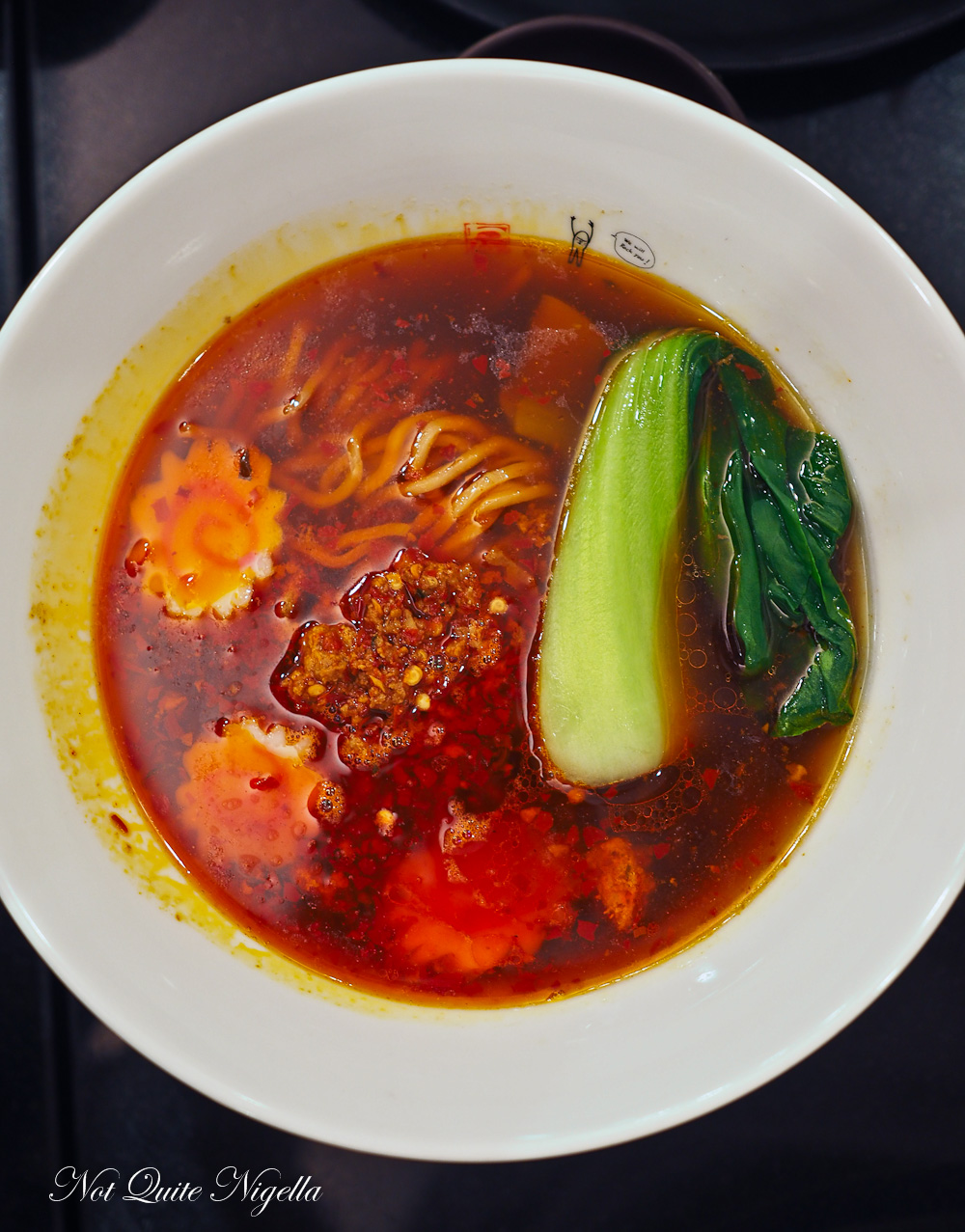 We saved the spiciest until last and once Mr NQN has a spoonful he warns my heat-fearing father not to eat it. It's spicy yes but not unbearable, just enough to challenge you unless you are of course not of the chilli loving ilk in which case I'd guess you probably wouldn't order this. Instead of char siu there is spicy finely ground pork mince, baby pak choi, discs of fish cake and noodles. 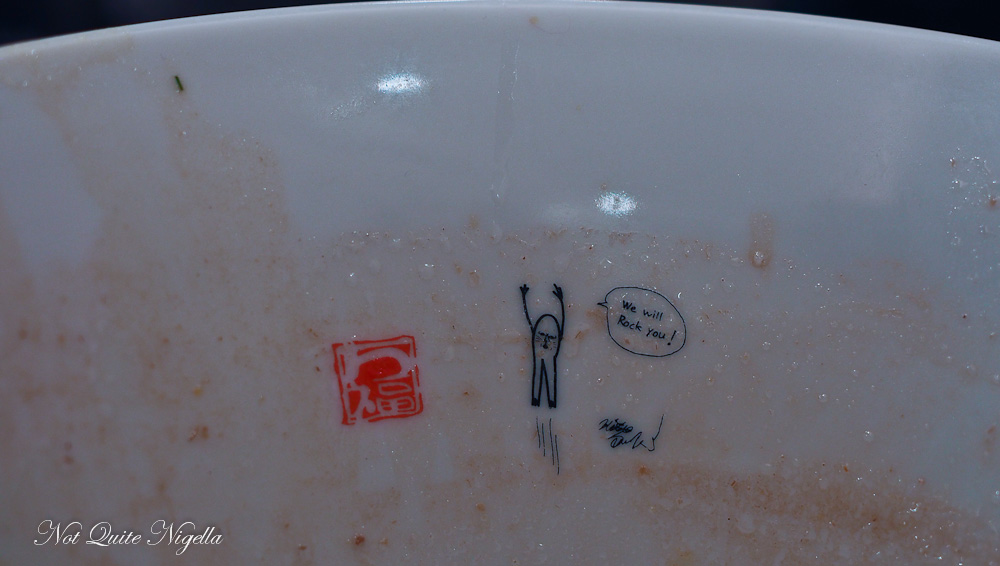 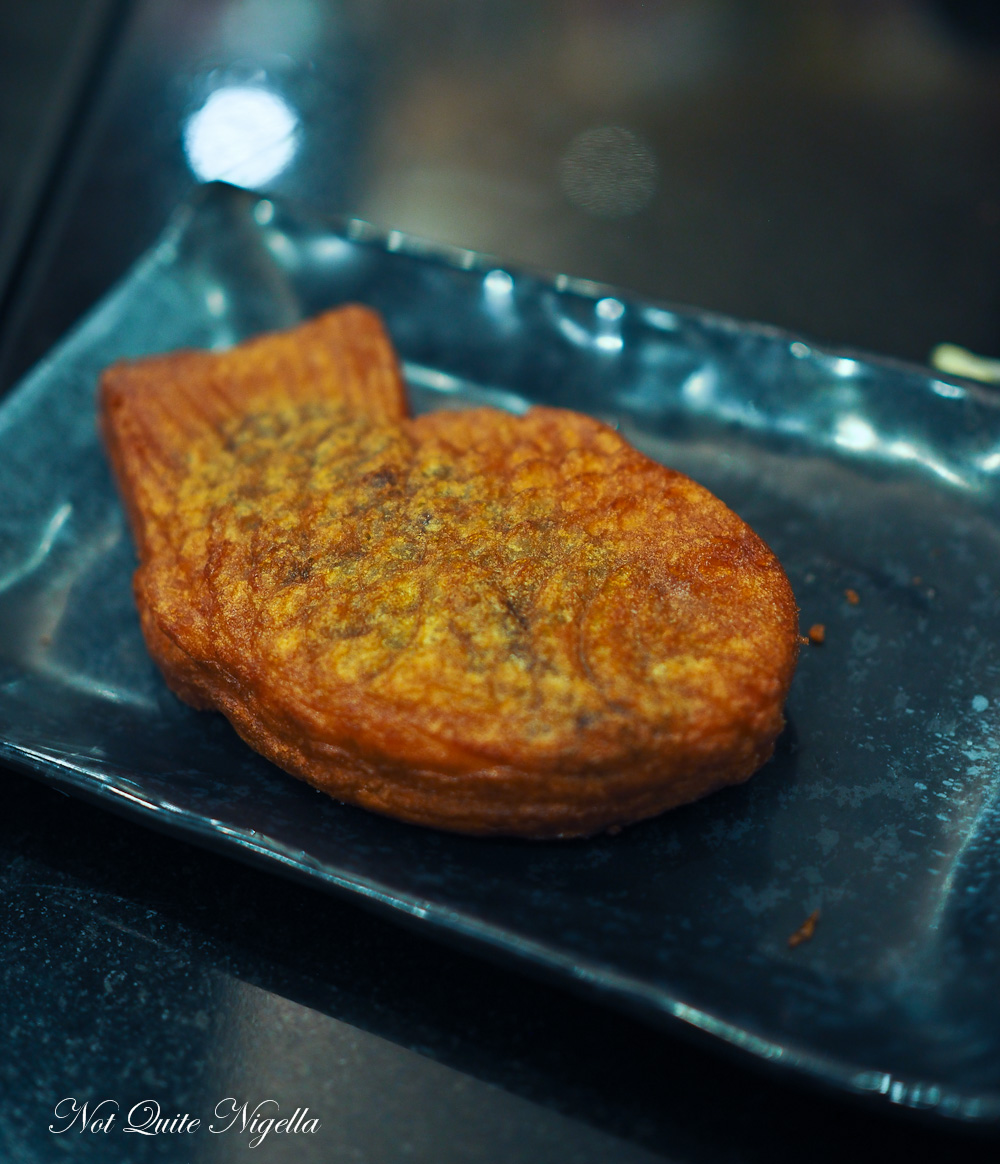 The Porugna are versions of taiyaki whereas instead of wafer it is a thicker, deep fried batter that encloses a filling of sweet red bean. It has appeal from the deep fried crunch but aroma and flavour wise there isn't much apart from sweetness. 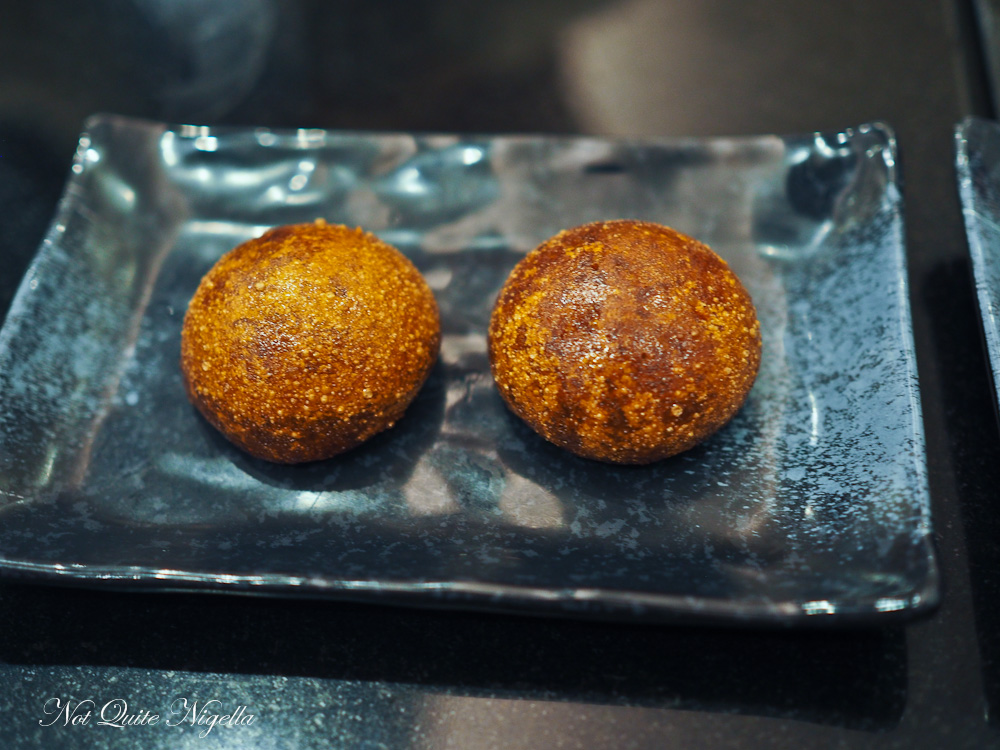 The Dragon's eyes are very similar but shaped like donuts made with a dark, crispy sugar crust on the outside and a sweet red bean filling on the inside. I don't know if I would order these again, certainly not together with the Porunga as they are too similar. Perhaps I'd go for their green tea mousse or a melon sorbet although these remain untried.

We don't dawdle because there is already a queue that has been waiting and we overhear a man declaring "I'm starvving!" which I have sympathy for because that was my refrain just 1 hour before.

So tell me Dear Reader, do you wait til you are very hungry before you eat? And do you enjoy people watching when you eat? Do you eat more ramen during winter or is it not a seasonal thing for you?