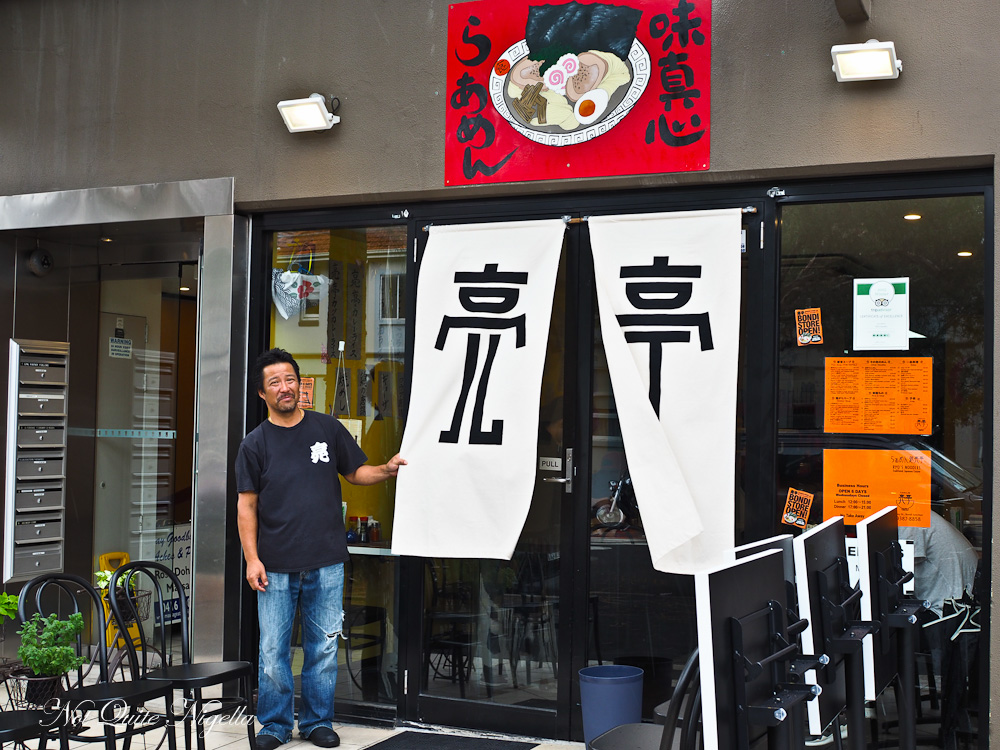 You know when you've reached Ryo's in Crows Nest when you see the line of people outside queuing to get in. Ryo Horii's ramen is legendary with a toothsome springiness to it. It's a well priced, filling and delicious lunch or dinner stop where quality is not compromised. But did you know that there is a newer branch in Sydney's Eastern Suburbs in Bondi Junction? Ramen-lover Mr NQN was only too happy to oblige with a visit.

What do you think we should do this afternoon?" I said to Mr NQN one Sunday after we had just finished the market shopping and brought back half a dozen bags' worth of food.

"I think I'd like a nap," he said, stretching. It was 2pm. And the man can nap for about 4 hours. That's more like a mini sleep. But we also hadn't eaten anything that day and my stomach was rumbling.

"How about ramen?" I asked and I think that and dumplings are the only things that could ever coax him from a nap. 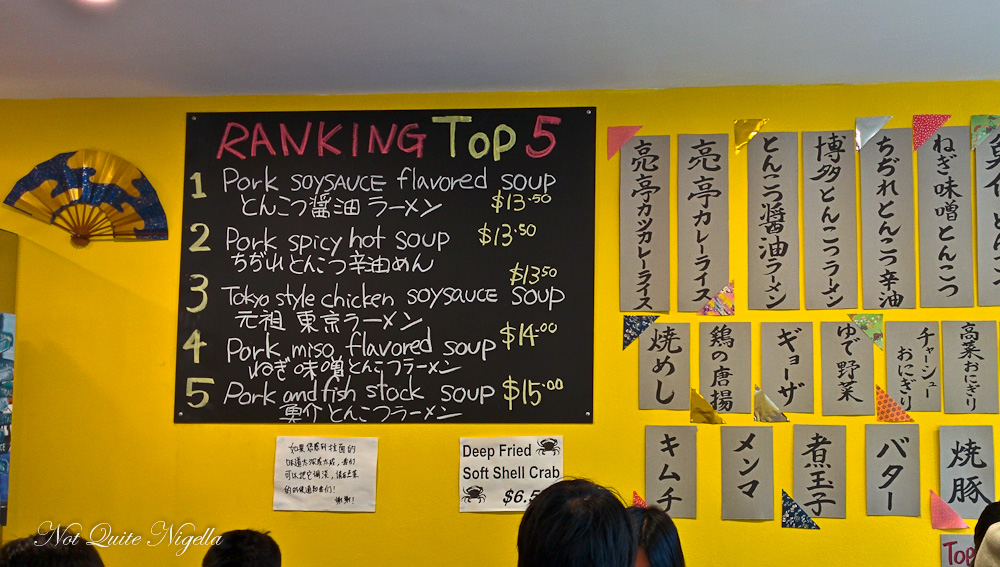 It's amazing how much ramen he can fit in and when we drive up to Ryo's on Ebley Street in Bondi Junction he starts to perk up. It's the newest branch of the store with a cult following in Crows Nest. The orange Noren cloth banners swing outside. Here, as it is relatively new there isn't a queue although we literally just slide into one of the last two tables free.

The inside restaurant is a tiny 22 seater with tables so close to each other that you tend to take a peek and enquire about things that the adjacent table has ordered. Ryo Horii himself is standing in charge and greets customers. There is also that familiar Japanese welcome greeting of "irasshaimase!". The Crows Nest branch has been open for 12 years and he remembers 12 years ago when there was no pork ramen at all available. "Now they are everywhere!" he says gesturing widely his hands. 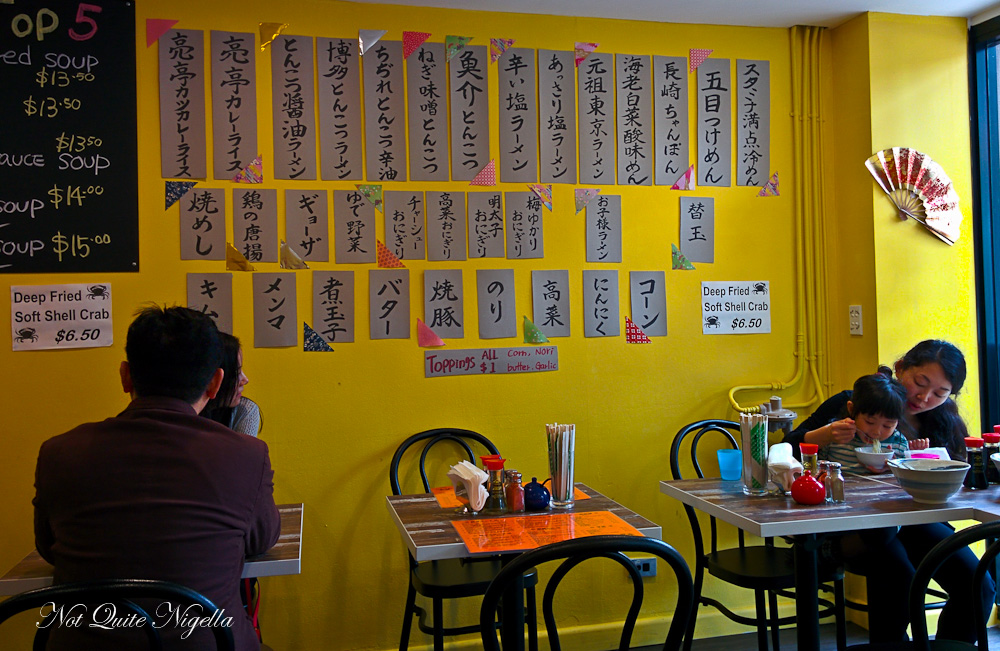 Both walls are filled with Japanese menus items and there is a menu handed to us in English. And to answer any customer's queries, there is a Top 5 ramen poster showing the most popular choices. There is pork tonkotsu broth, that thick, collagen rich broth that is unctuous and silky at the same time. The clearer chicken stock is a different proposition but nevertheless very satisfying. Unlike the Crows Nest store there isn't a miso bolognese ramen and they have pork buns but the Bondi Junction branch has a weekday lunchtime special of roast pork roll. 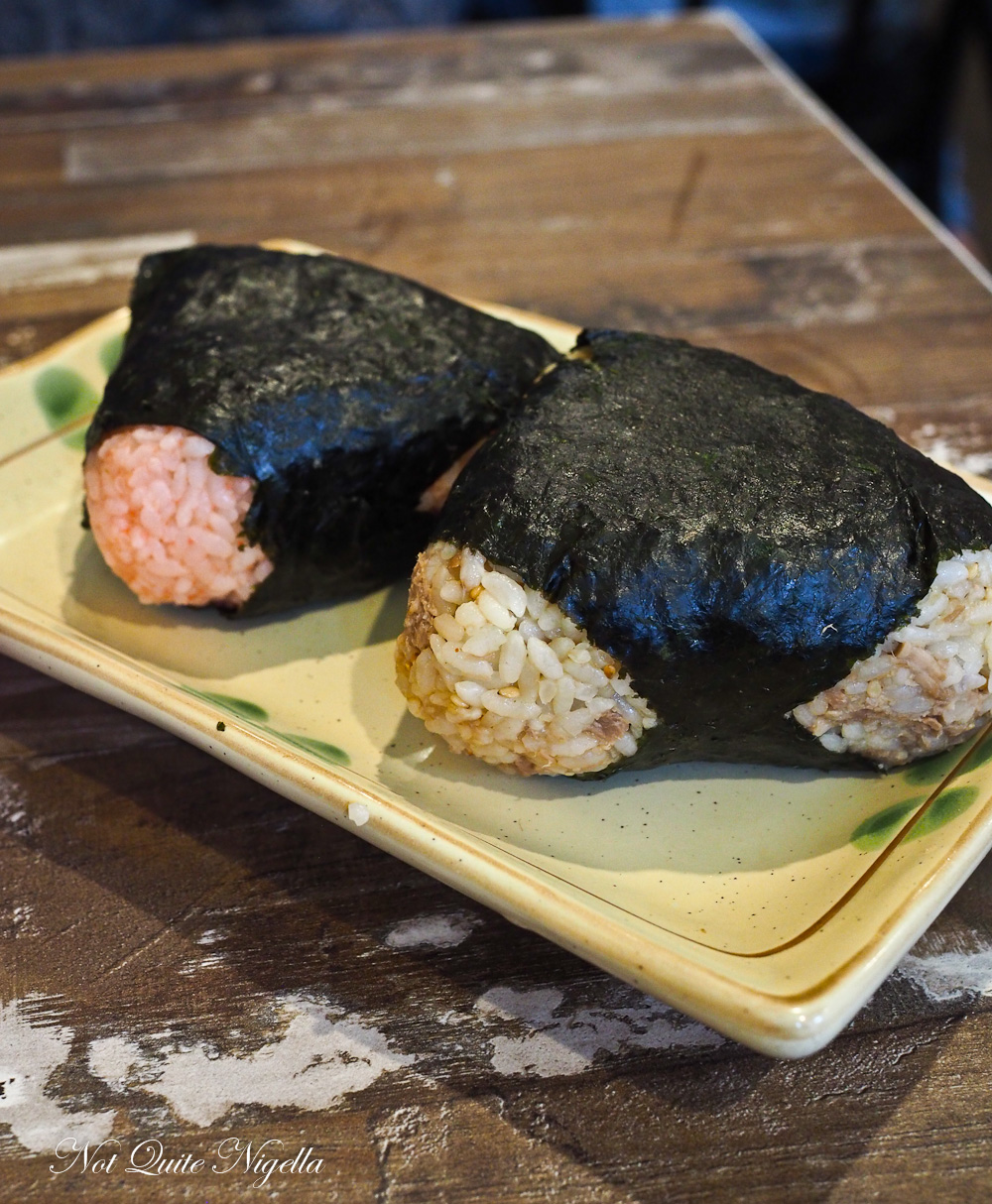 We decide to start on some rice balls with mentaiko or pink cod roe and roast pork. They're absolutely enormous and almost meals in themselves. Wrapped in nori for easy eating we both love the roast pork, diced finely and scattered throughout the rice. 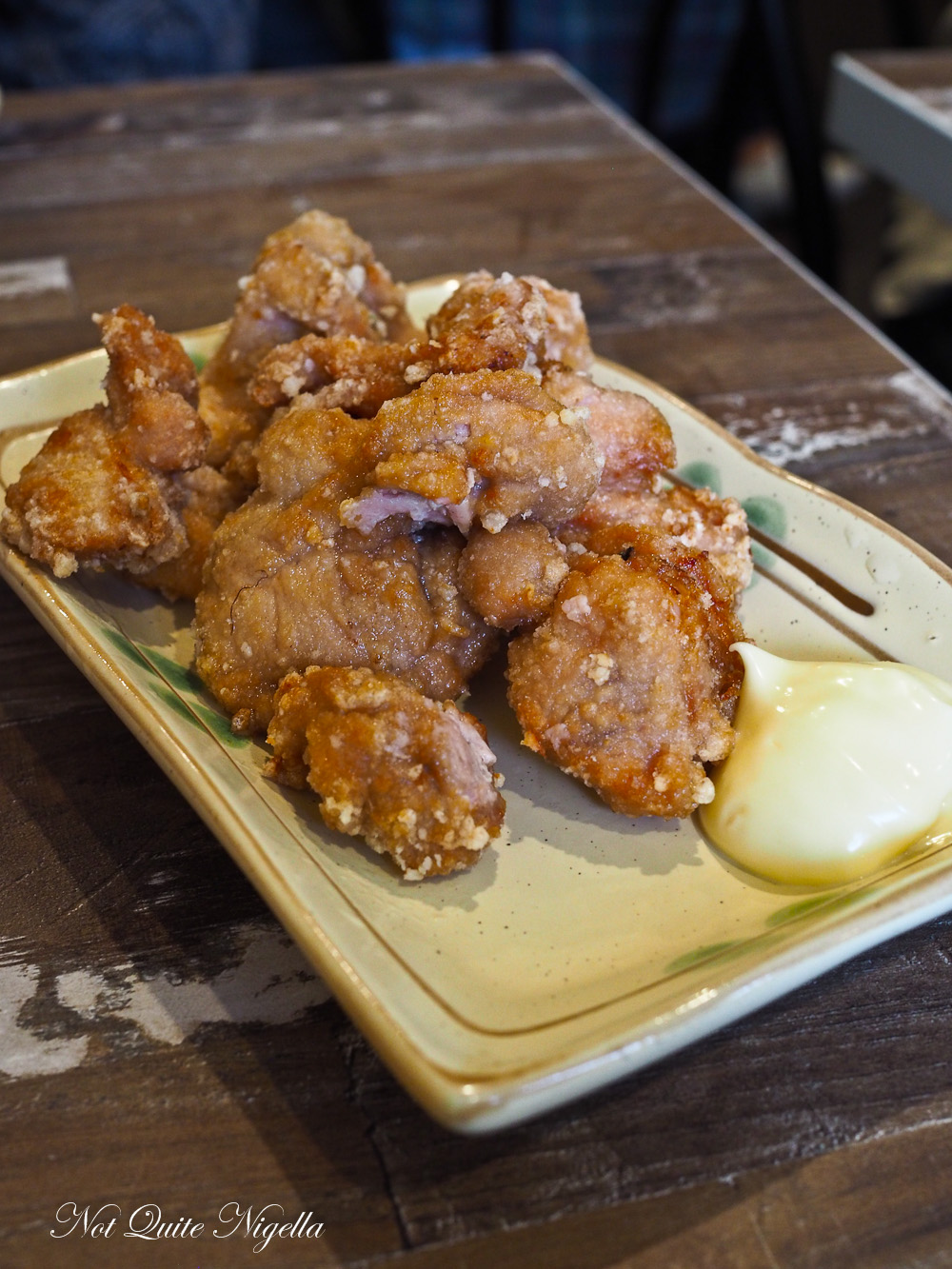 The fried chicken karaage is well seasoned and is very tender, moist and soft on the outside. It comes with some Japanese mayonnaise on the side and I give it a generous shake of chilli powder before digging in. 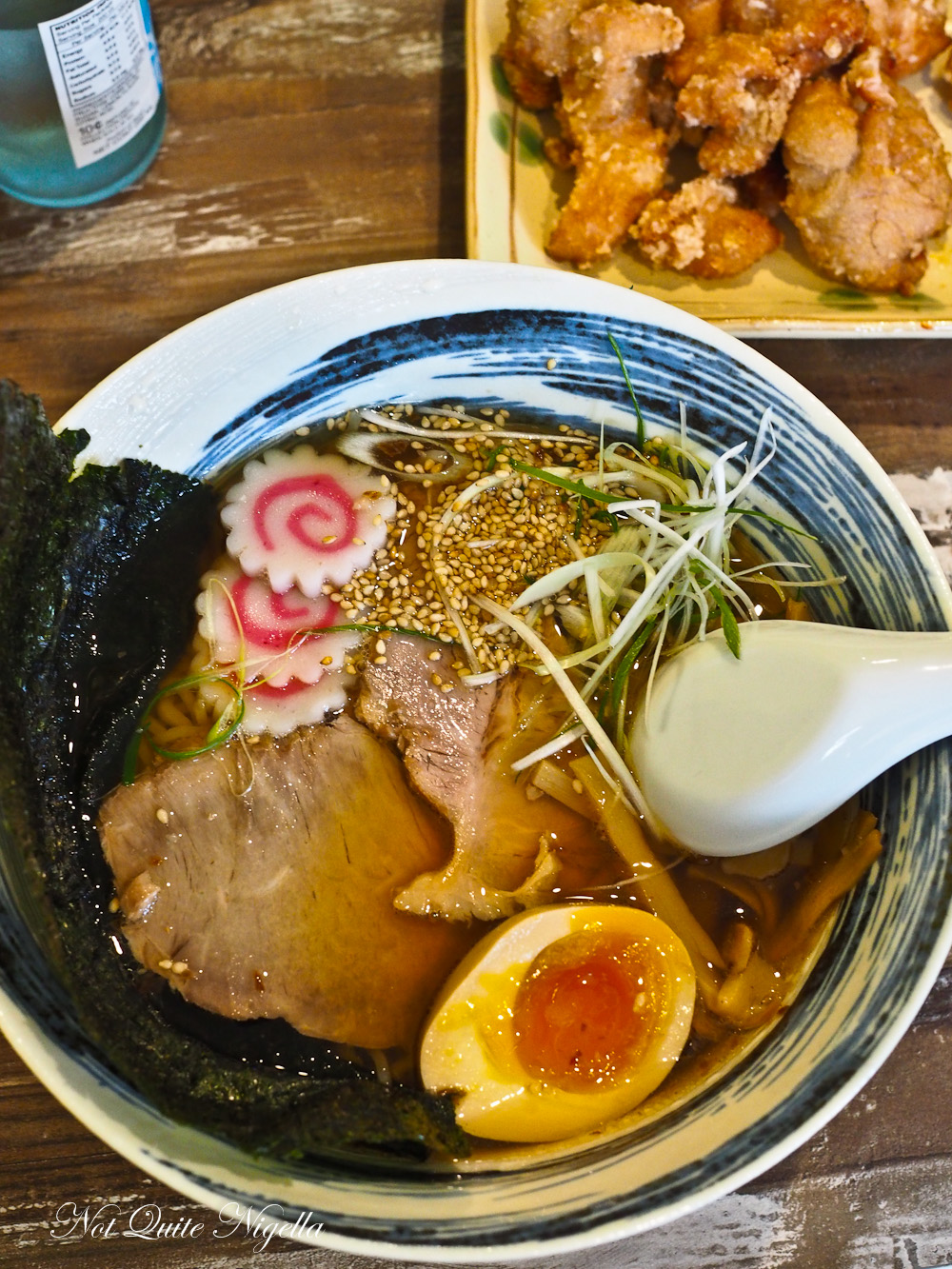 Mr NQN loves this Tokyo style soy sauce soup with two thick slices of roast pork, two halves of onsen egg, bamboo shoots and nori. Extras like corn, butter, garlic etc can be added for $1 more but I would have this as it is. The soup is rich but not thick and the pork is buttery soft. But what gets us coming back are the springy, toothsome noodles. It's almost like a bottomless bowl of noodles too. 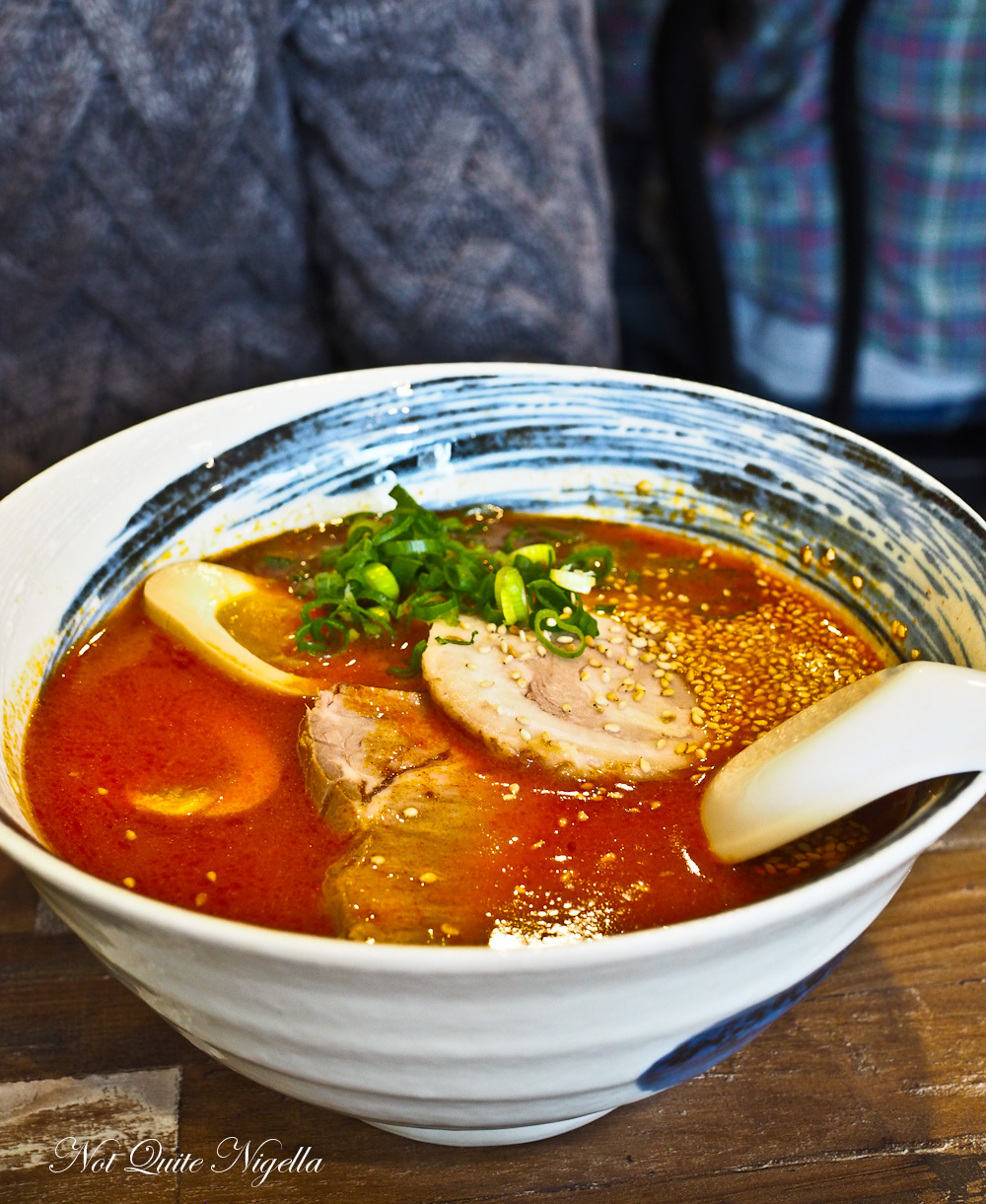 But I tend to love richer foods and this ramen in the vivid scarlet coloured soup is fantastic. Often Japanese food isn't particularly spicy but this does pack a good punch to it. At first I think that the orange is a layer of chilli oil on top but it is perfectly emulsified and insanely rich. With the same toppings of roast pork, bamboo shoots and spring onion it's so rich that I can only get into a quarter of it before I start getting the sweats (which is what happens to me whenever I have tonkotsu ramen). And when I look up after taking a break and taking some photos, Mr NQN has finished both bowls of ramen.

Predictably his next line is of course, "I feel like a big nap now..."

So tell me Dear Reader, can you finish a whole bowl of ramen by yourself? Do you have a ramen combo that you like the best? What food tempts you into action more than any other?