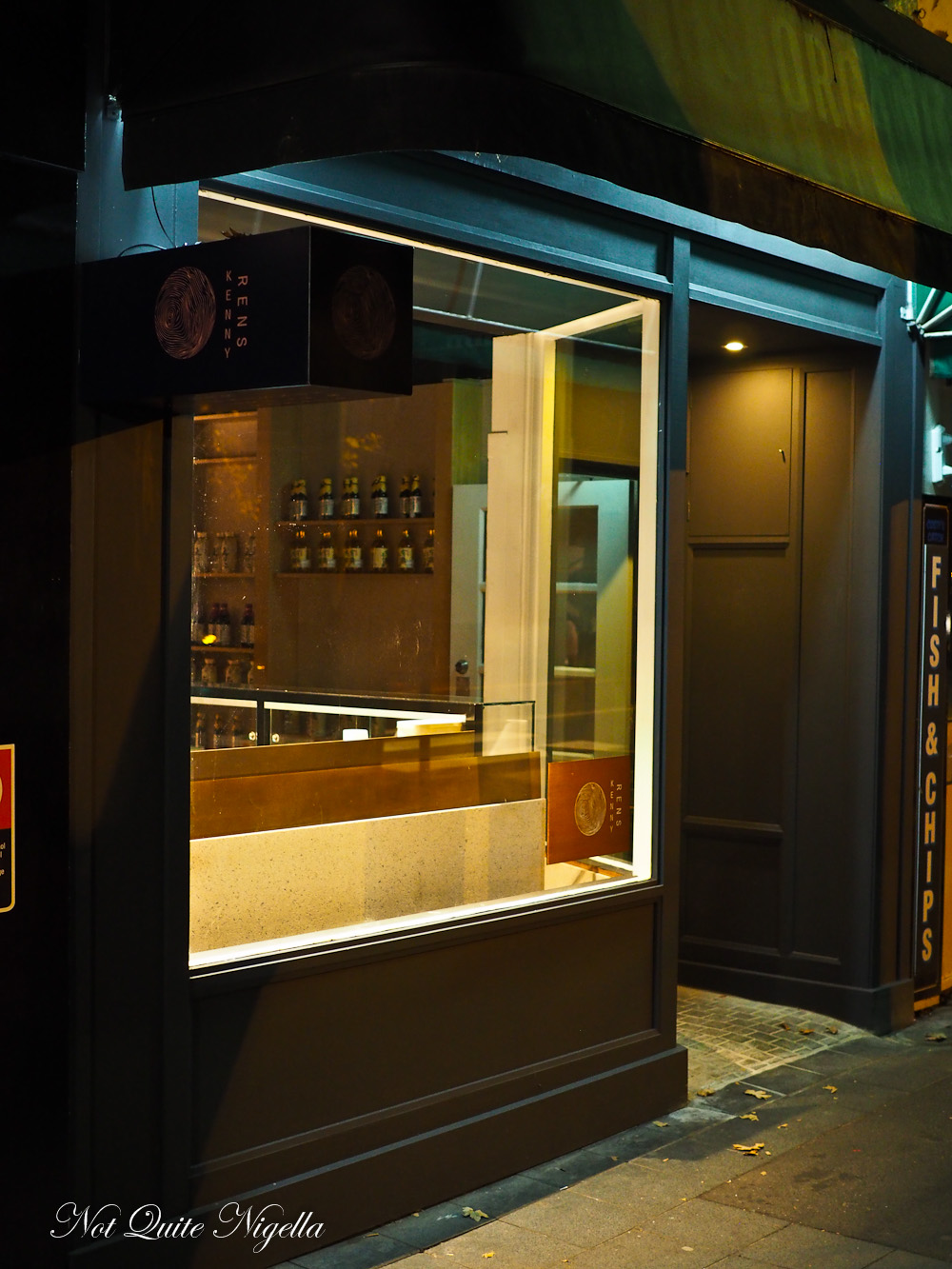 Queen Street in Woollahra has a new Japanese restaurant called Kenny Rens. It was inspired by a restaurant designer and a businessman's travels to Japan. On offer is an original cocktail menu and robata grill treats as well as a raw bar. So what's the toughest thing about it?

Sometimes nights don't end up the way you necessarily want them to. There we were: me, Mr NQN, Nina and Garth sitting outside with Mochi at a bar in Darlinghurst when Nina and I started to get bitten like crazy by mosquitoes. As if we were the mosquito buffet and we counted about a dozen fat, swollen itchy bites each. So we assessed our options and fled the swarm of mosquitoes. Mr NQN dropped Mochi off to my mother and we waited for a table at Kenny Rens, the new Japanese restaurant on Queen Street in Woollahra. 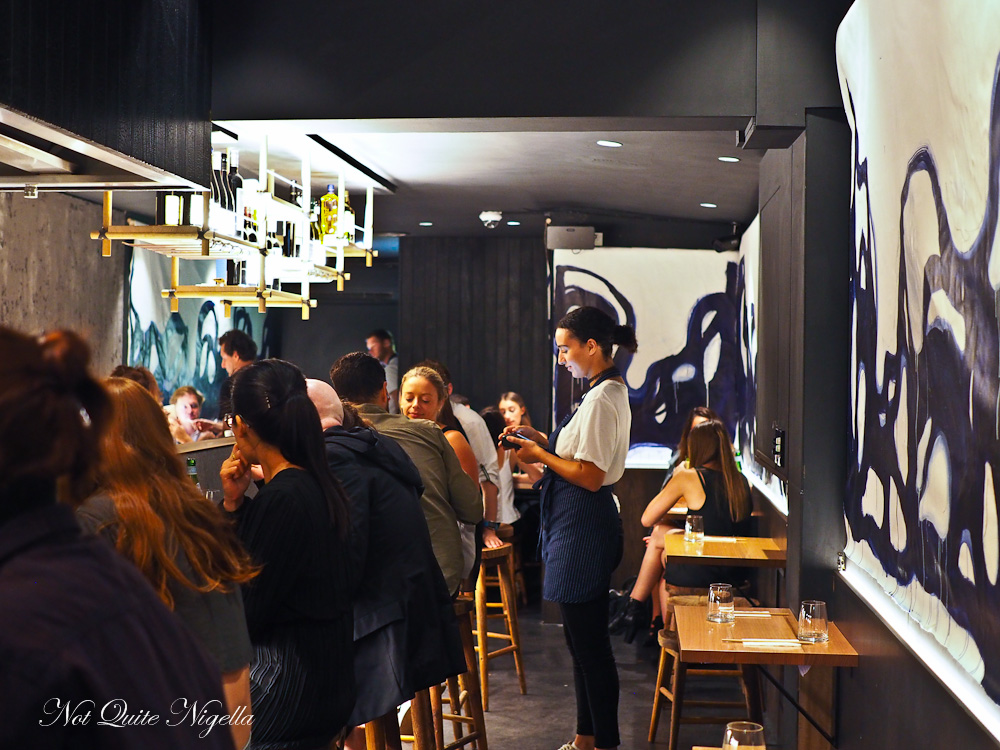 It's a long rectangular shaped restaurant with what looks like a poke or sashimi bar out in the front section (although oddly there's no poke on the menu) and then the heavy sliding door reveals the restaurant itself. It features an open kitchen on the left and seats on the right. But despite the designer touch we can't help but question the seating. There's a long bar area and lots of tables for two (tables bolted to the wall so you can't move them) but if you have a larger table there is only one table for four. And that table just sat down to eat moments before we arrived. 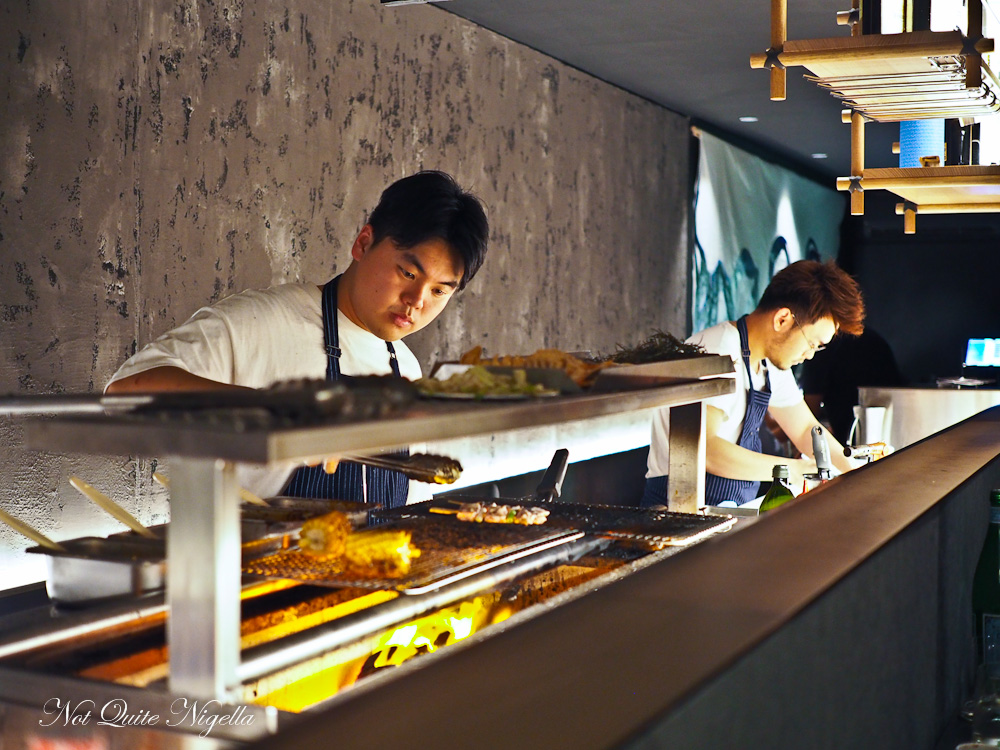 Undeterred Nina, Garth and I squeeze onto a tiny wooden bench made for two outside on Queen Street and wait and wait and watch people buy sushi from the shop next door. "Are we going to have a picnic in the park?" asks Nina. "No we'll get a table," I say with more confidence than I feel. Mr NQN has gone to drop Mochi off and returns and we are still waiting. 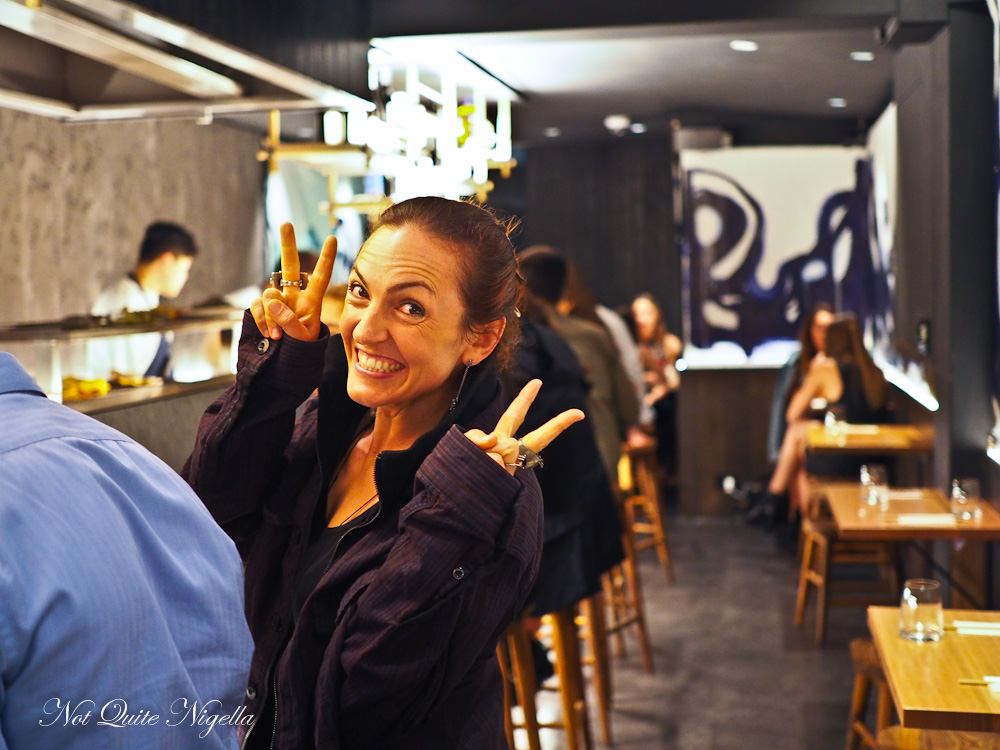 We got a seat!

A table for two and three get seated but the elusive table for four never appears because of course they've just sat down. It's only when a couple leave the bar seating that they add additional seating for us. Yay we have been seated! Oh and if you're curious about the name Kenny Ren, designer Paul Kelly's son is called Kennedy and Paul's favourite bird is a blue wren. The concept and name also came together when Paul hung out in Tokyo with a man called Kenichi who took him to a robata restaurant called Bird Land. 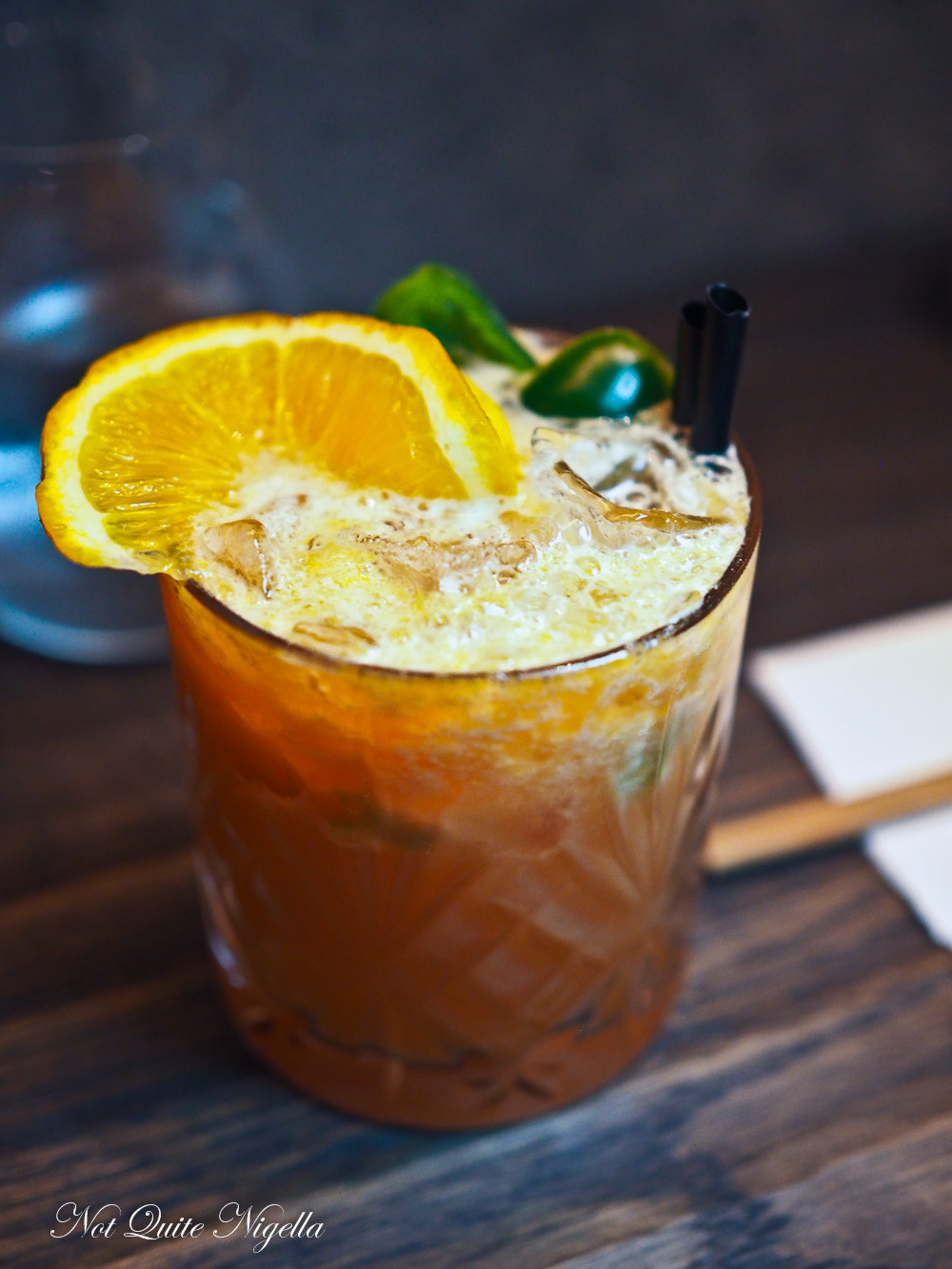 Having had drinks beforehand we opt for something soft while Mr NQN orders the Akuma Fire Demon. It's an expensive cocktail at $24 so we're hoping for a lot. The bartender is chatty and he devised the cocktail menu. Mr NQN's cocktail is a mixture of sweet, tart and spicy with blood orange, agave, jalapeno and Suntory Hibiki. 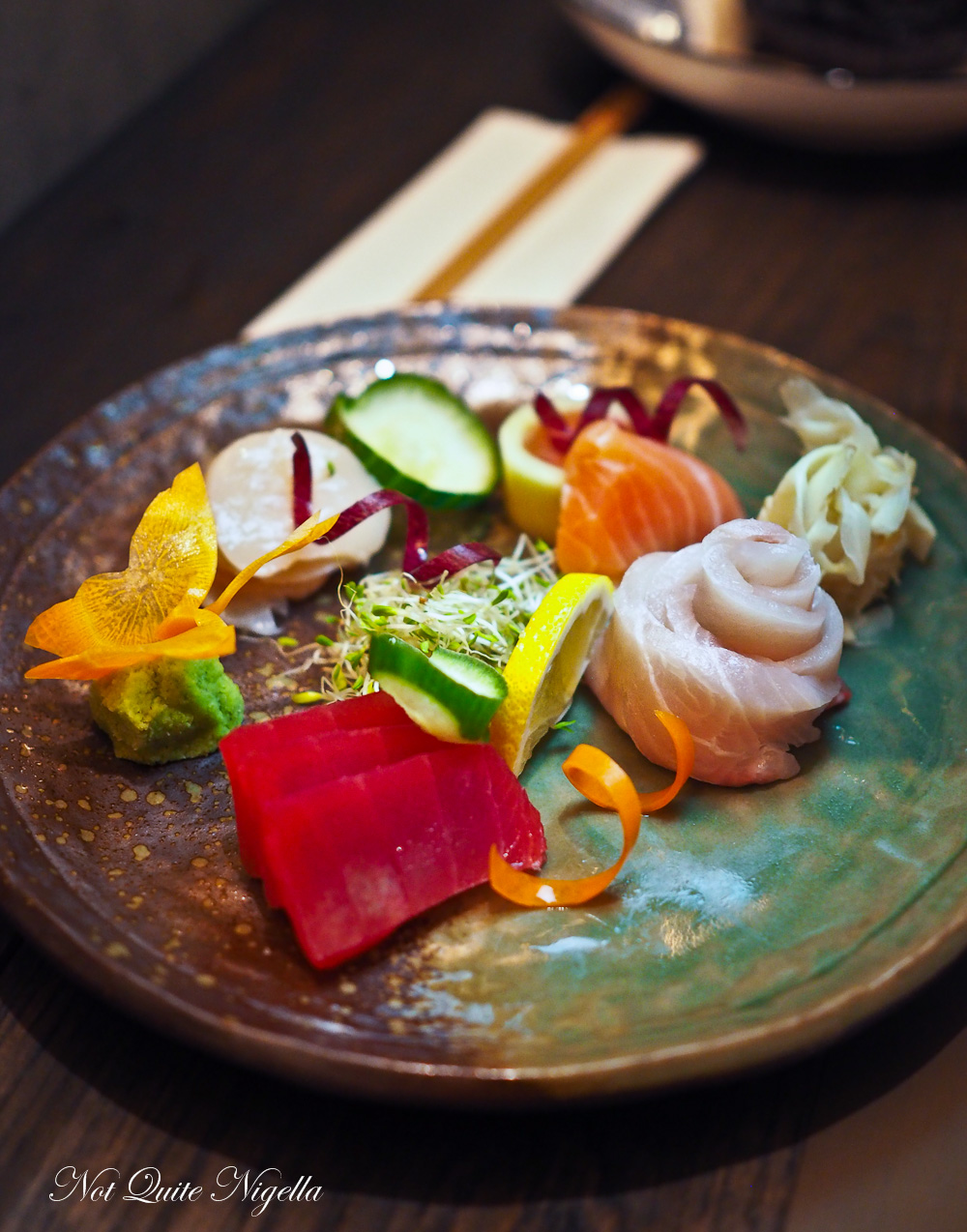 We start with the sashimi selection, a fantastic, fresh selection of fish. I particularly like the raw scallops and the salmon. 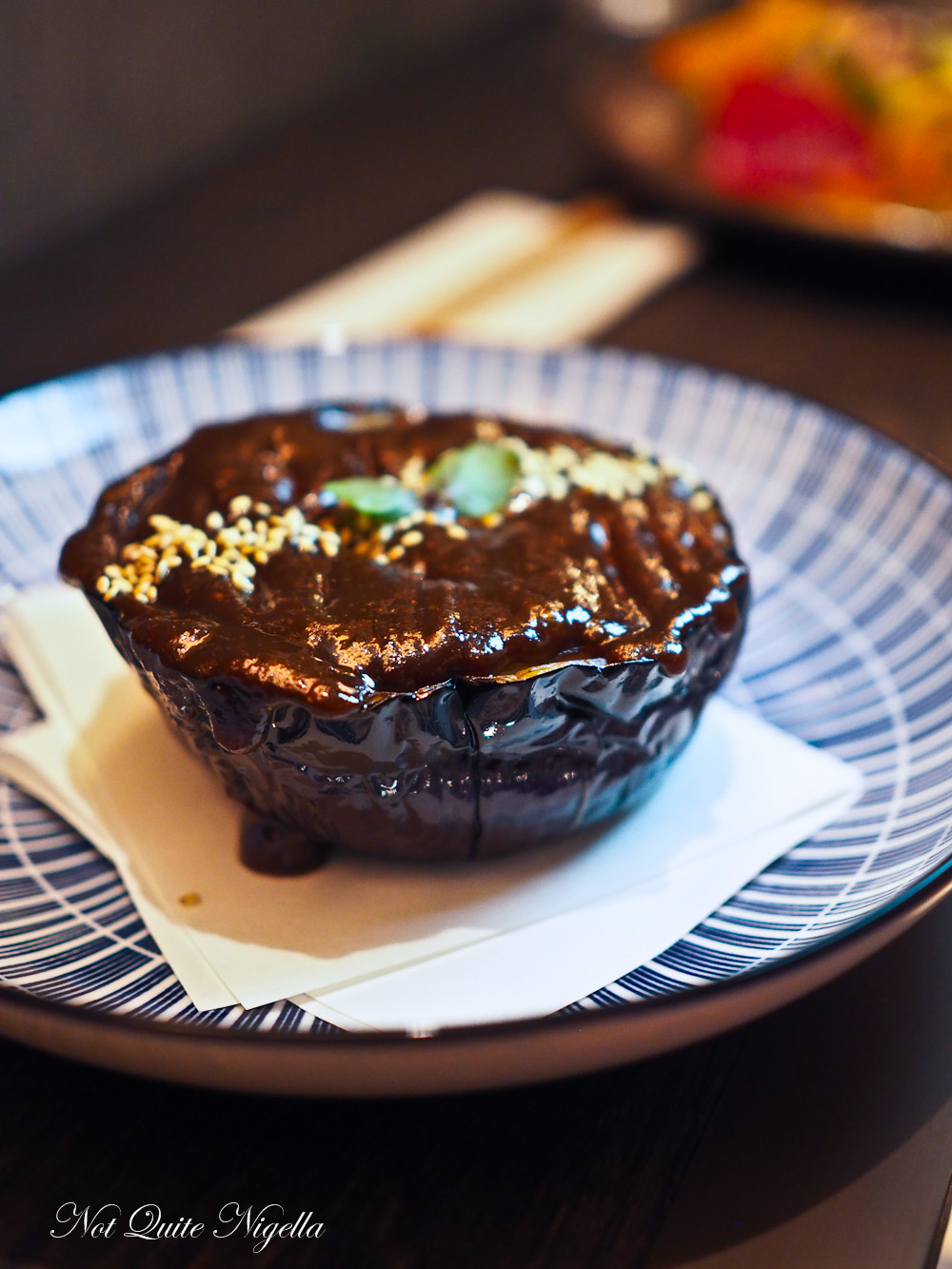 Vegetarian Nina is very happy with her nasu dengaku, a meltingly soft piece of eggplant with a miso glaze that actually looks like chocolate cake. "Tell them you enjoyed the chocolate cake!" I whisper to Nina. She does but they either don't hear her or choose to ignore it. Which prompts a question as to how to make eggplant this soft and melty because neither of us have been able to get it that soft before. 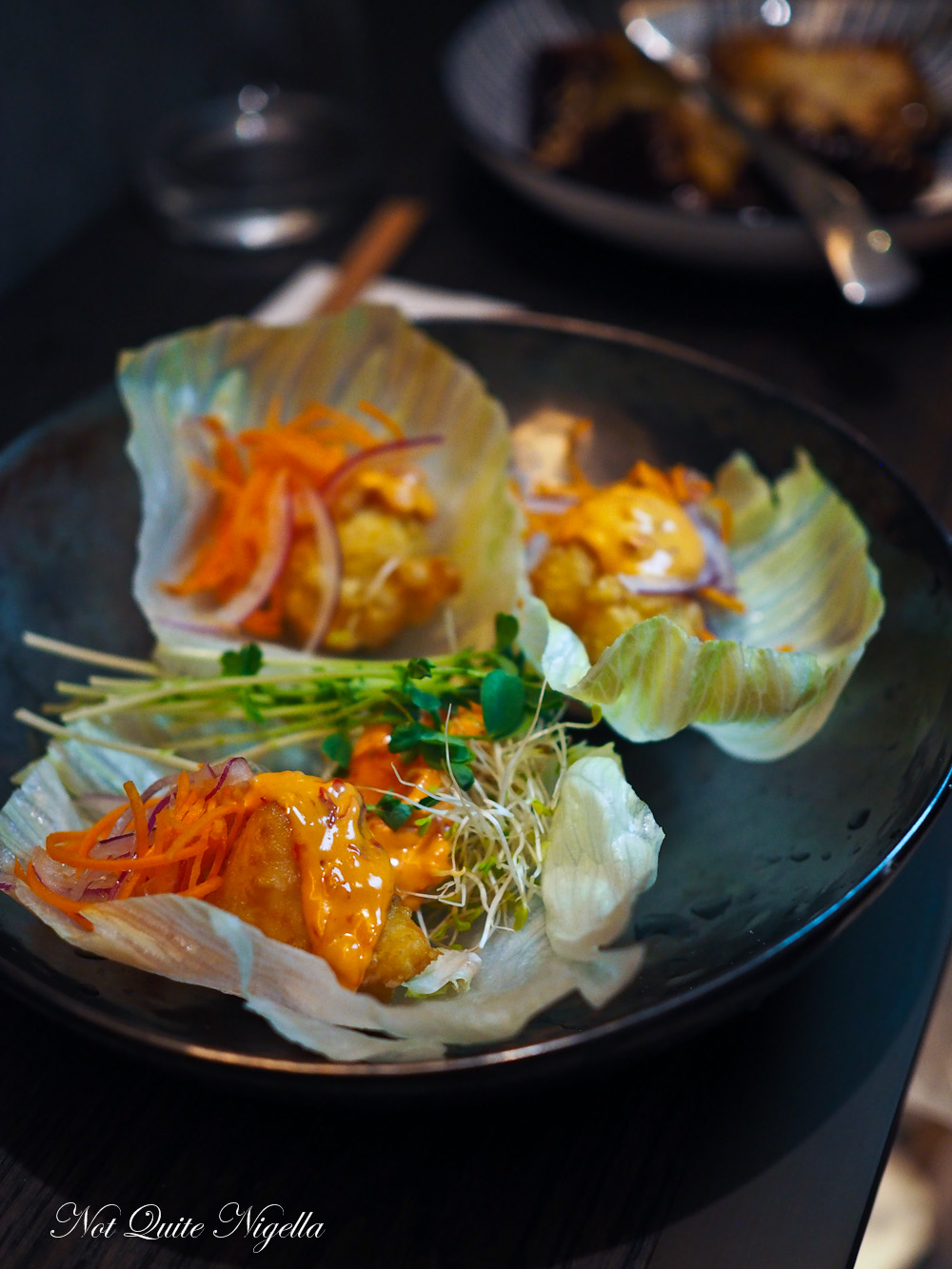 The Balmain bug lettuce cups are nice and spicy with a good amount of seafood on them. I don't know if the iceberg works as well as a softer lettuce as it waters down the flavour of the bug and tobiko. Mr NQN thought that there was something perhaps missing in the dish. 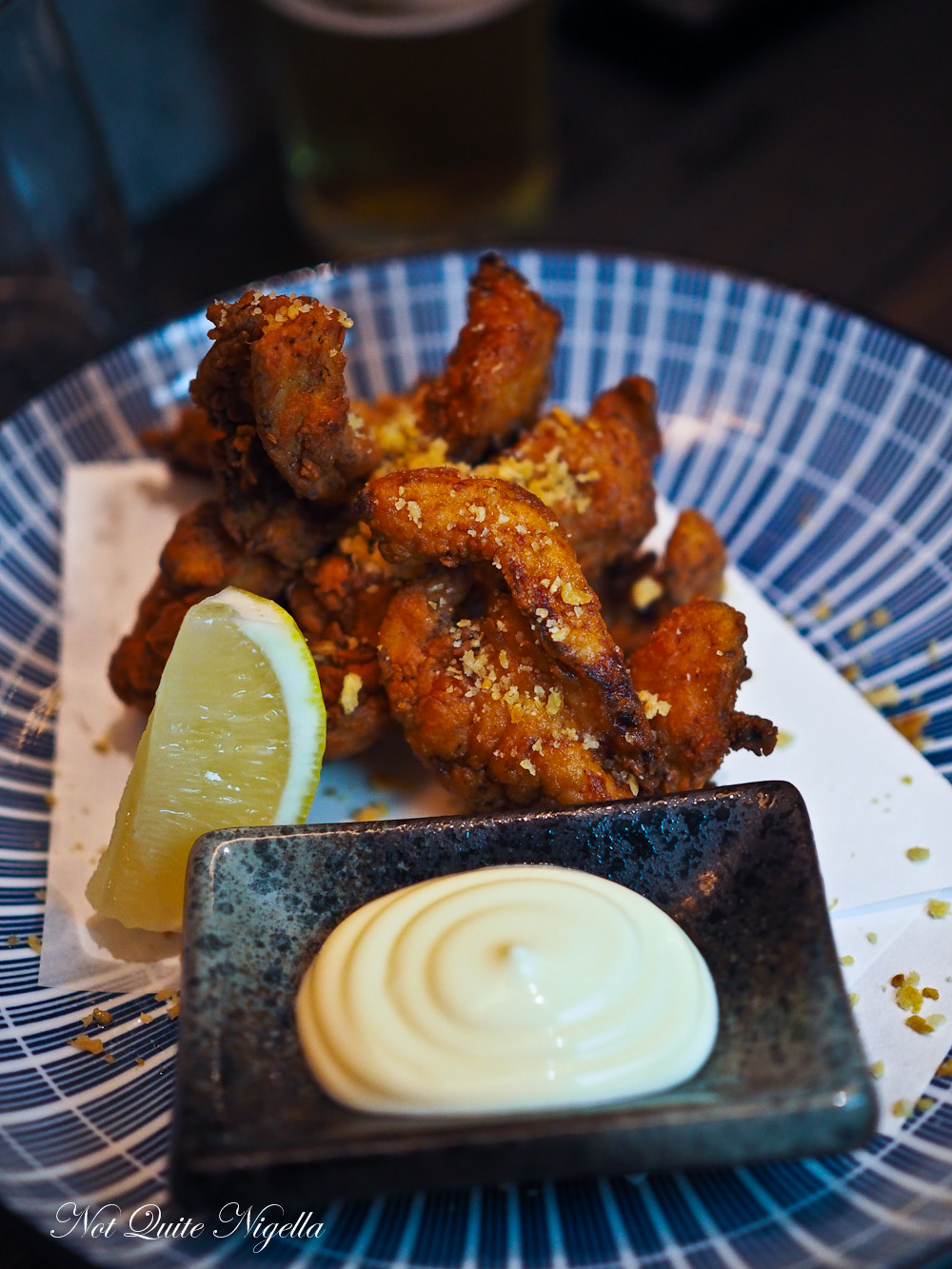 On the website they have crocodile karaage which I had pegged to order but it isn't on the menu tonight. Instead it's chicken karaage - boneless, tender and juicy pieces of chicken with a choice of yuzu or wasabi mayonnaise. We all love yuzu and it fits the mayonnaise perfectly and adds citrus tang in the same way that lemon does to fried food. 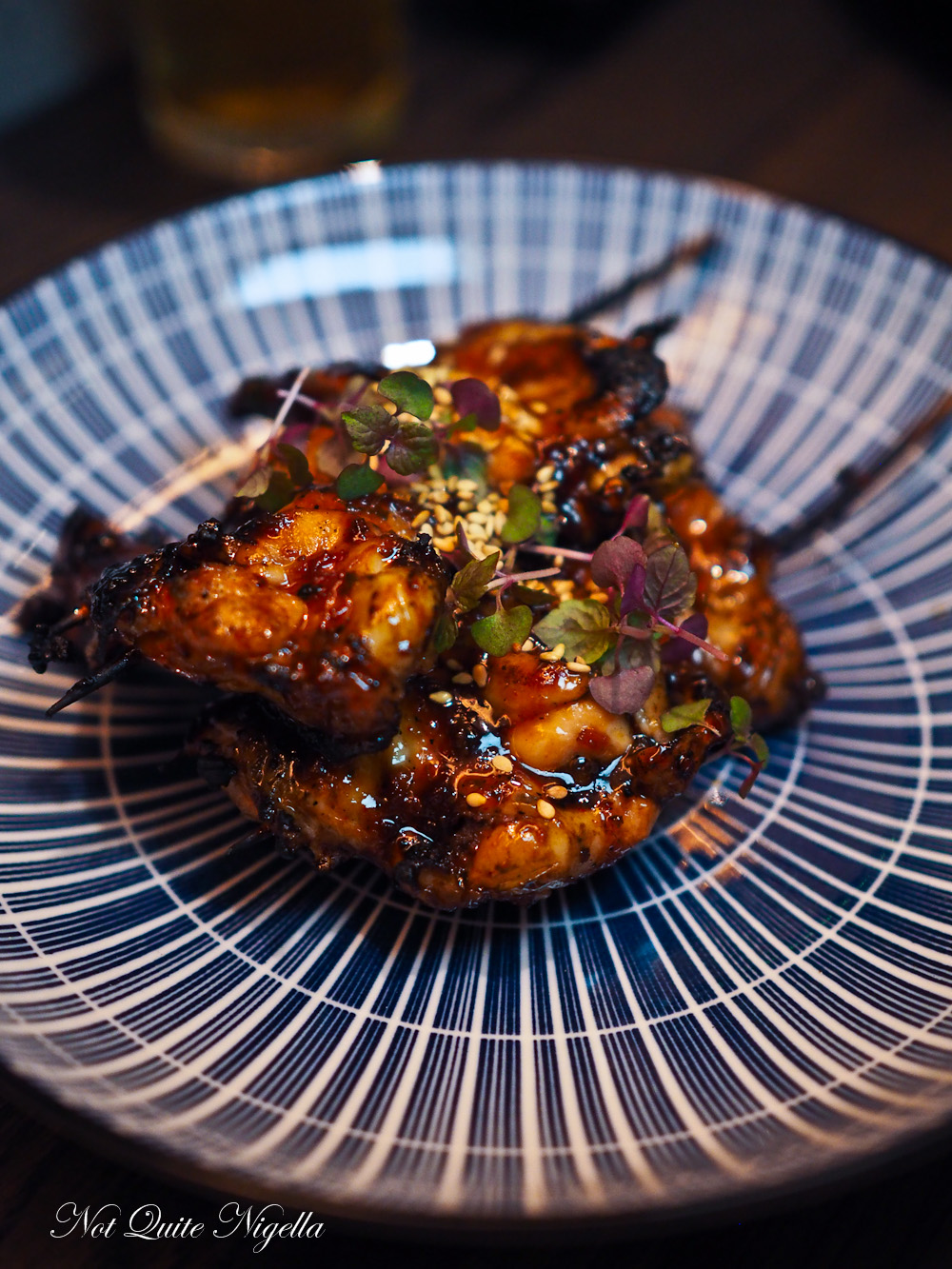 The Robata grill is on show in front of us and erupts into flame on occasion. They baste the corn on this as well as chicken skewers. The chicken wings are juicy and come as two skewers with a drummette and wing. 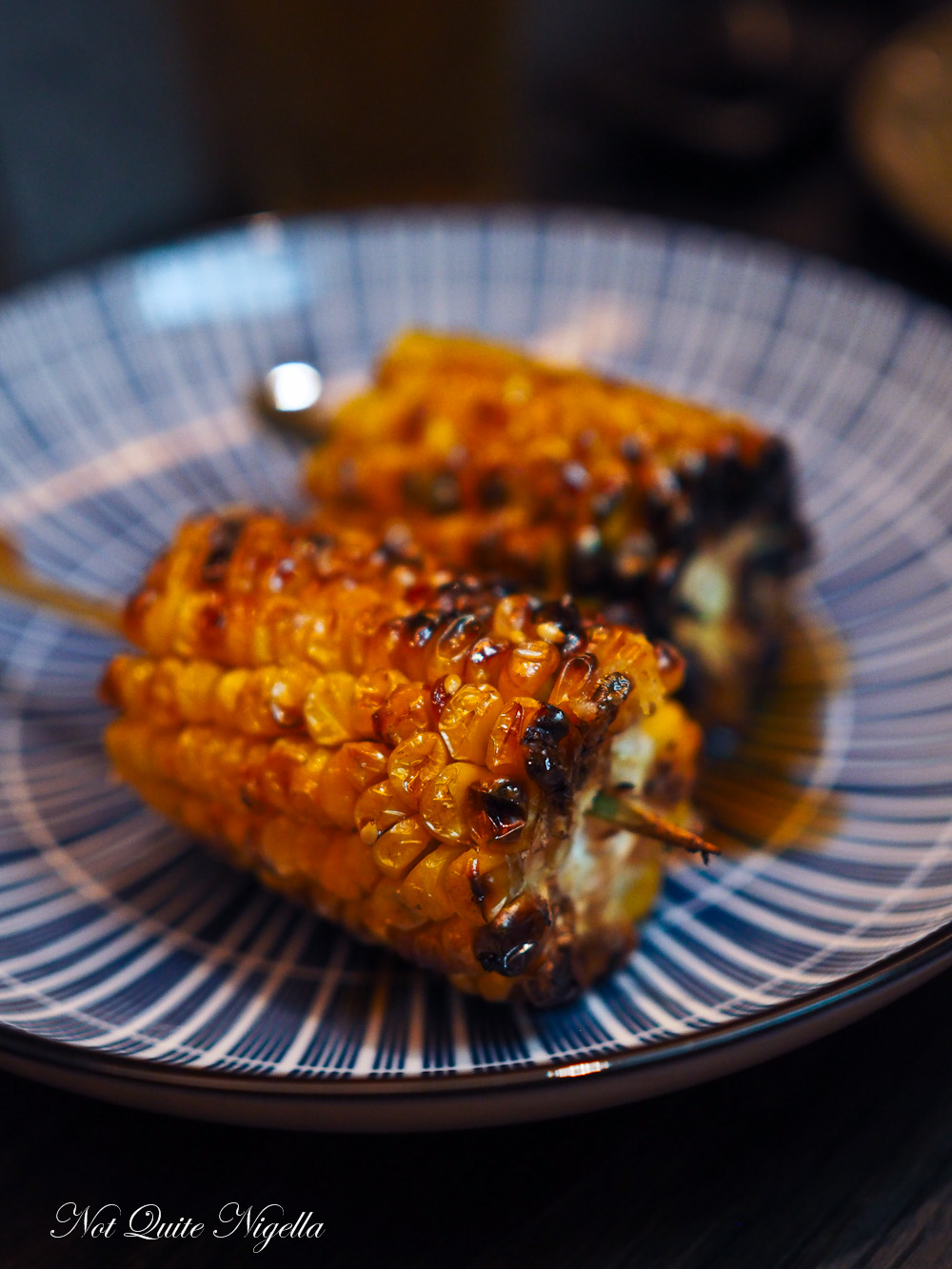 "Do I have corn in my teeth?" asks Nina shoving a kernel of corn in her teeth. Nina's order of the sweet corn comes crunchy grilled and sweet. Some kernels are so crunchy they're like popcorn. 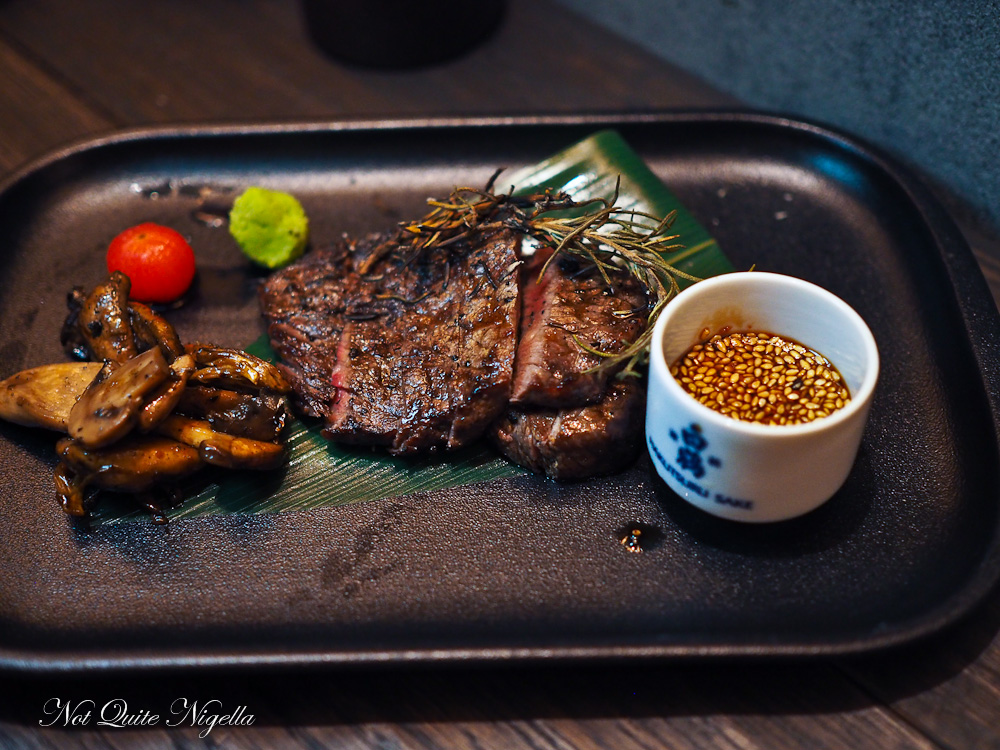 As disappointed as I was that there wasn't the crocodile karaage I was very happy to see two choices of wagyu, both the same cut just with a marbling score difference of 5 and 7. It comes already sliced, meltingly tender and gets an umami, spicy injection from a dip in the sauce provided. It melts in the mouth and I almost wish I had this whole plate to myself. 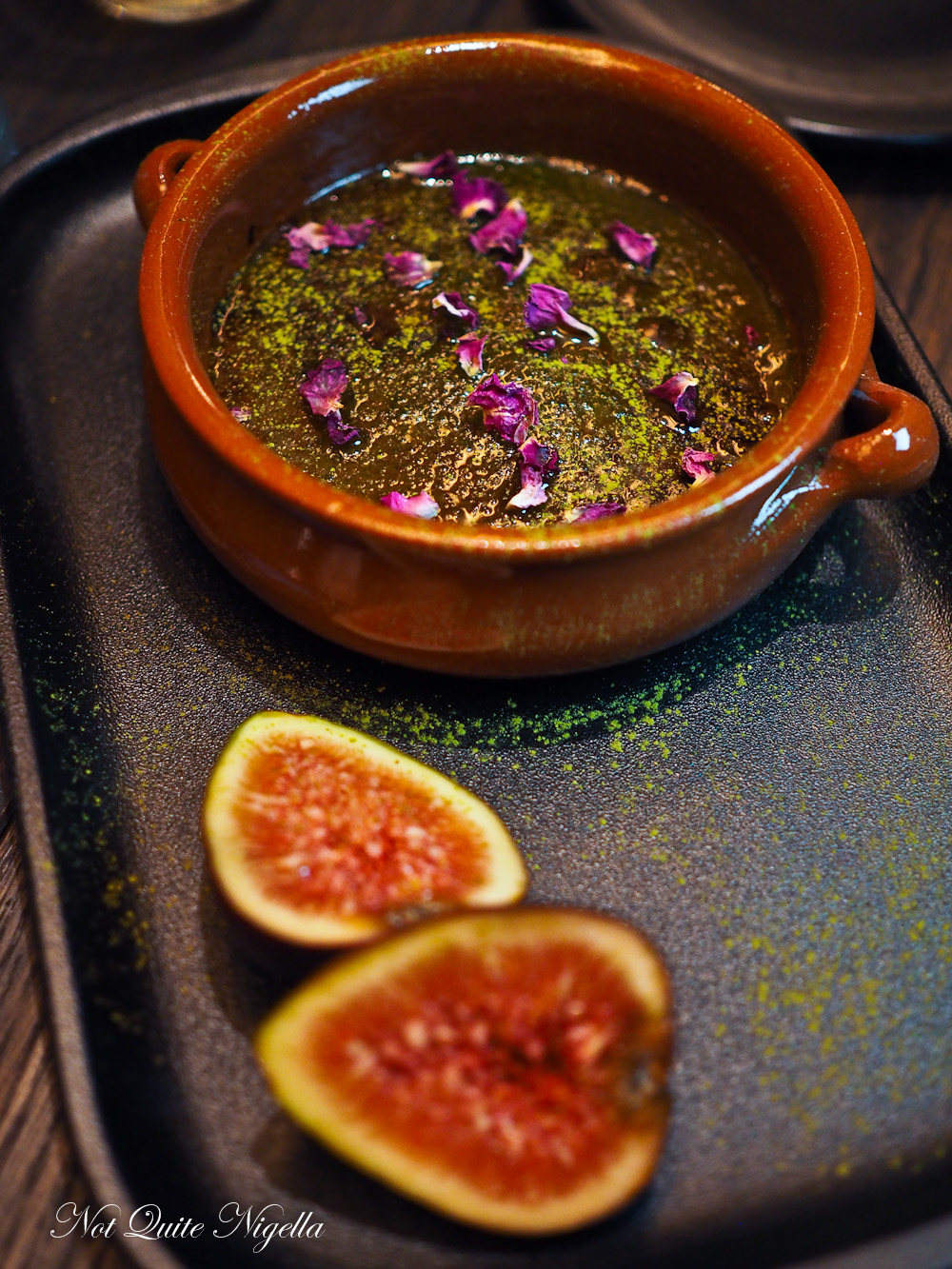 Usually I eschew crème brûlée on a menu because I make it at home and it's easy to do but I liked the sound of the black sesame crème brûlée with figs (said to have grapes too but they are missing). With a thin crunchy toffee layer scattered with rose petals and a dark, mysterious black sesame custard underneath we're all digging in with our spoons. Even sweets averse Nina likes this dessert.

It's late and it's the last call. We're just glad that the night ended up better than it started and we didn't have to have a late night picnic in the park.

So tell me Dear Reader, do your nights out always go as planned? And have you ever had to have a picnic in the park? And do you have a favourite bird? I'm rather partial to kookaburras, flamingoes, pelicans and cockatoos :)