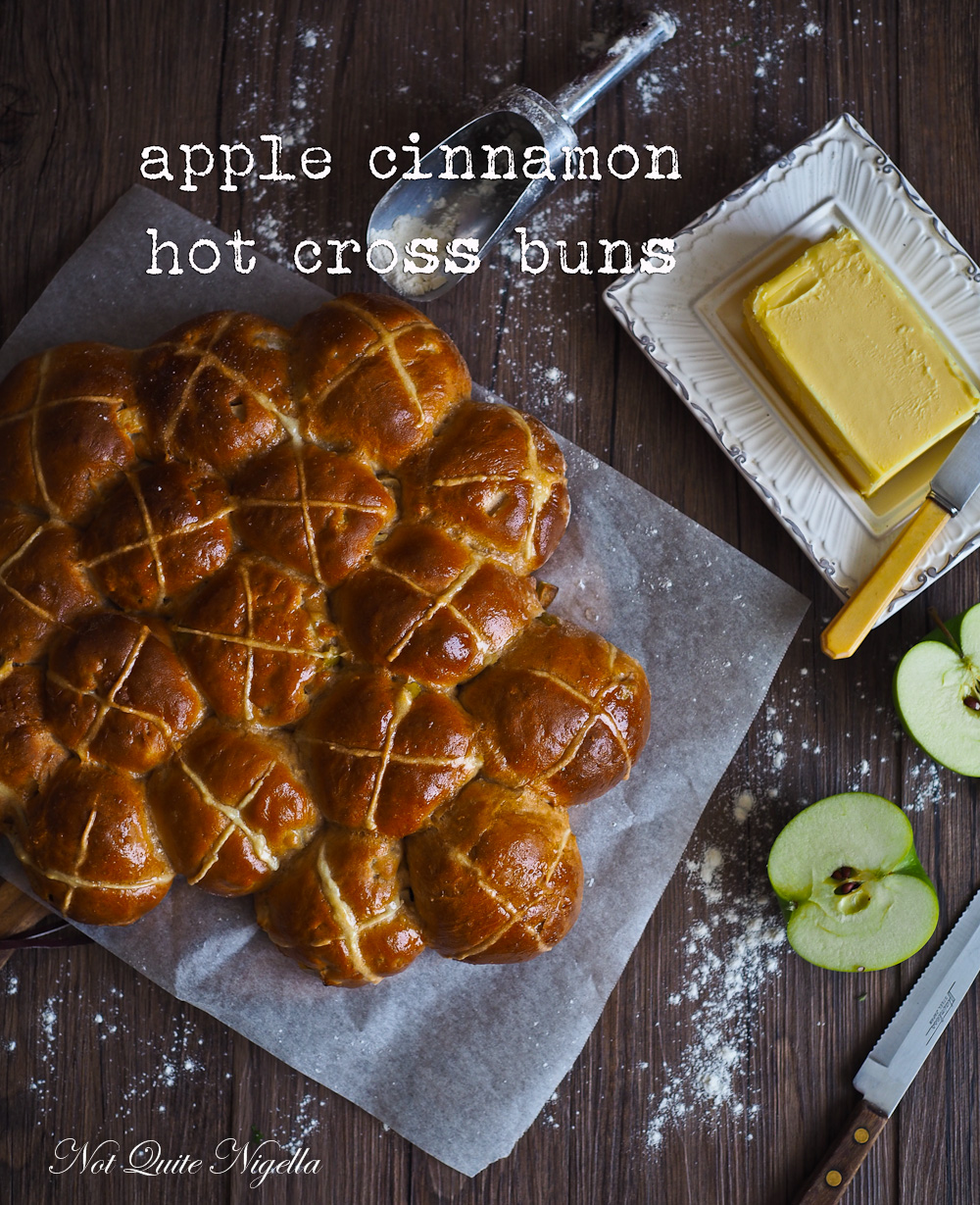 For many years I searched high and low for a bakery quality hot cross bun and two years ago I stopped my search with these bakery style hot cross buns. I've lost count of the number of people that have written to me to thank me (thank YOU for being so sweet!). This year I didn't want to alter it too much but to make a different flavoured hot cross bun-apple and cinnamon! 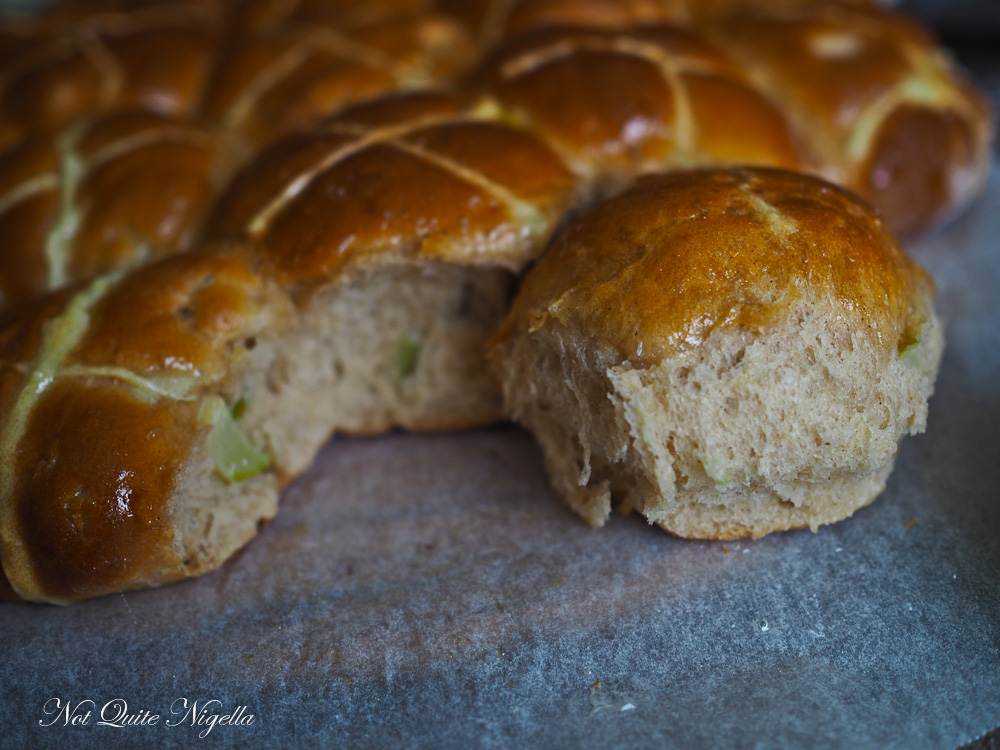 At the risk of sounding boastful (probably too late but please don't mistake my excitement for ego), these are actually better, softer and fluffier than any commercially made hot cross bun. They use tangzhong which is a simple roux that you make at the beginning that makes a huge difference to the end result. You may be skeptical because that's what most recipes promise but don't deliver. 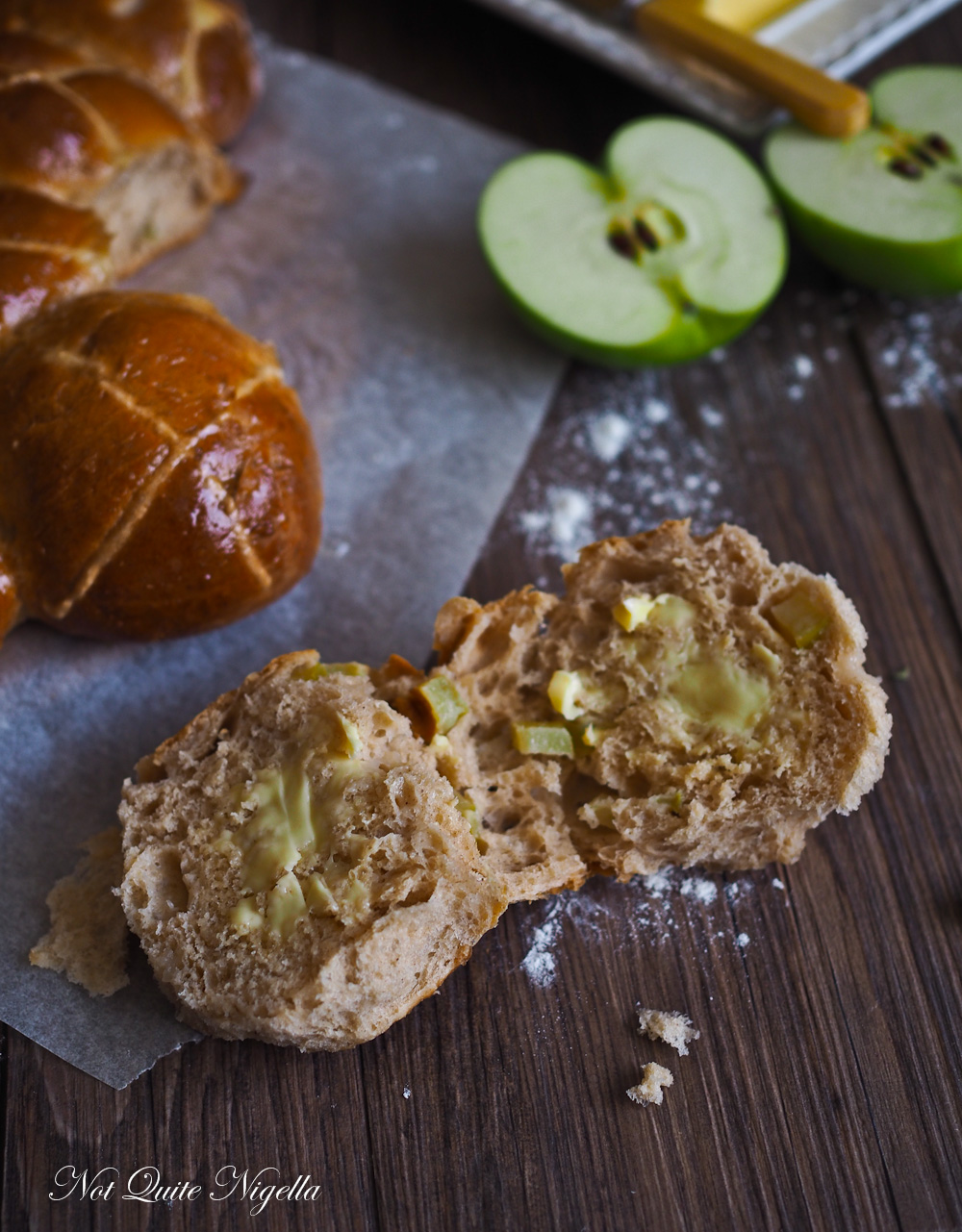 I was in the car the other night with Mr NQN, Nina and Garth and we were talking about times in which we haven't quite delivered or told the truth. I decided that 10 years on it was time to confess to Mr NQN about something that had happened many years ago. We were overseas in a resort and our room had a spa bath and there were all sorts of potions and lotions lined up on the side of the bath. "I'll run a bath!" I said excitedly because that's what couples do when they go away together, they take baths together. 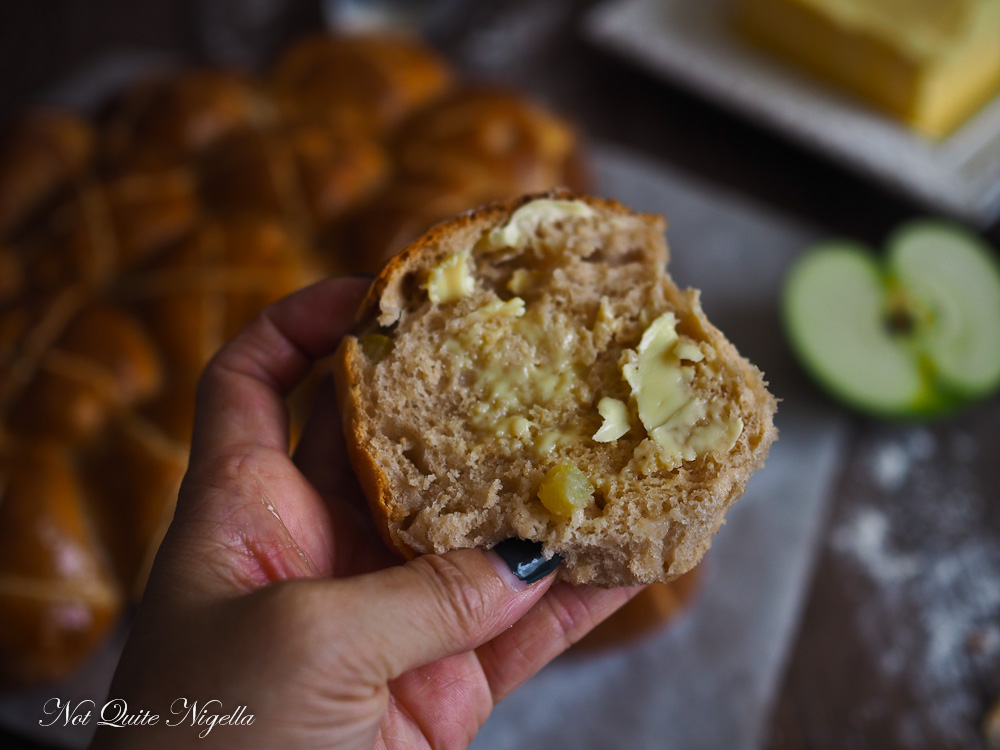 Mr NQN sat in the bath and I grabbed what looked like exfoliant salts. I sometimes like to play "beauty parlour" and give him facials and do treatments on him and we're like two monkeys grooming each other. I said that I would polish his skin until it was smooth and glowed. So I started scrubbing him on the chest with the exfoliant. Except it wasn't fine exfoliant salt. It was chunks of hard bath salts. As soon as I swept my hands back and forth a couple of times I realised my mistake. It was like rubbing someone with gravel.

"So umm, how does that feel?" I asked employing a wide smile.

"It seems a bit sh%t," Mr NQN said grimacing and trying to get away from my scratchy overtures.

"Ok that's it! Beauty treatment over!" I said brightly and hoped that he would forget about it. I never actually explained that where I had gone wrong in case he wouldn't ever trust me with the beauty parlour game. And that night as I was confessing it all in the car with everyone. Luckily he didn't remember this incident at all but now I've confessed and reminded him he may not trust me again.

I think I'll have to bake him a batch of these. They'll make him forget again I hope ;)

So tell me Dear Reader, do you like sharing baths? Have you got secrets that you keep from your partner? Do you ever bake your own hot cross buns? 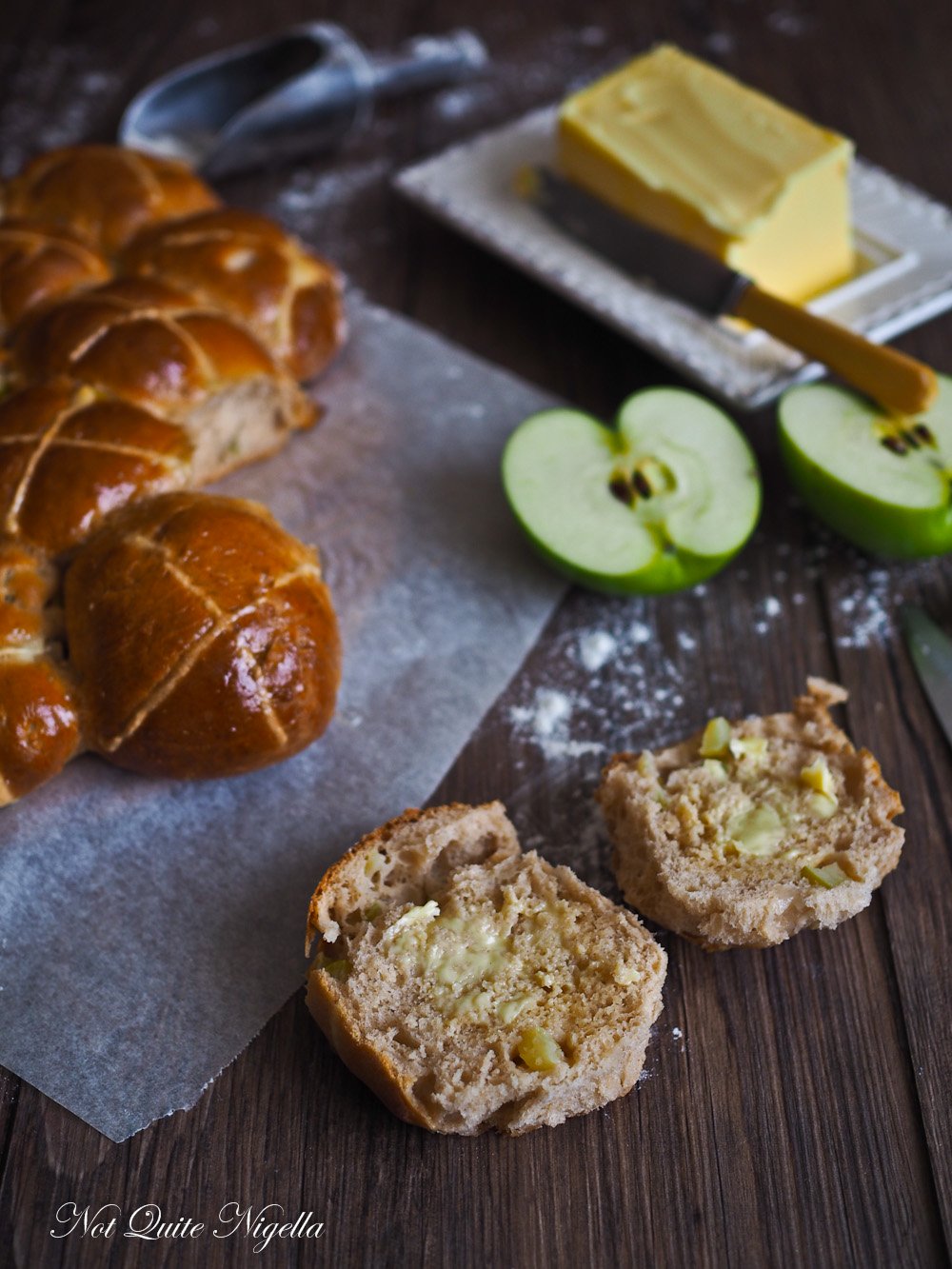 Step 1 - Make the tangzhong (this is what makes the bread so soft and fluffy!). Take 1/6 cup of flour and whisk it with the 1/2 cup of water in a small saucepan. Heat it on medium heat and wait til it reaches 65C/149F. Remove from the heat and whisk in the milk, honey and eggs. Set aside. 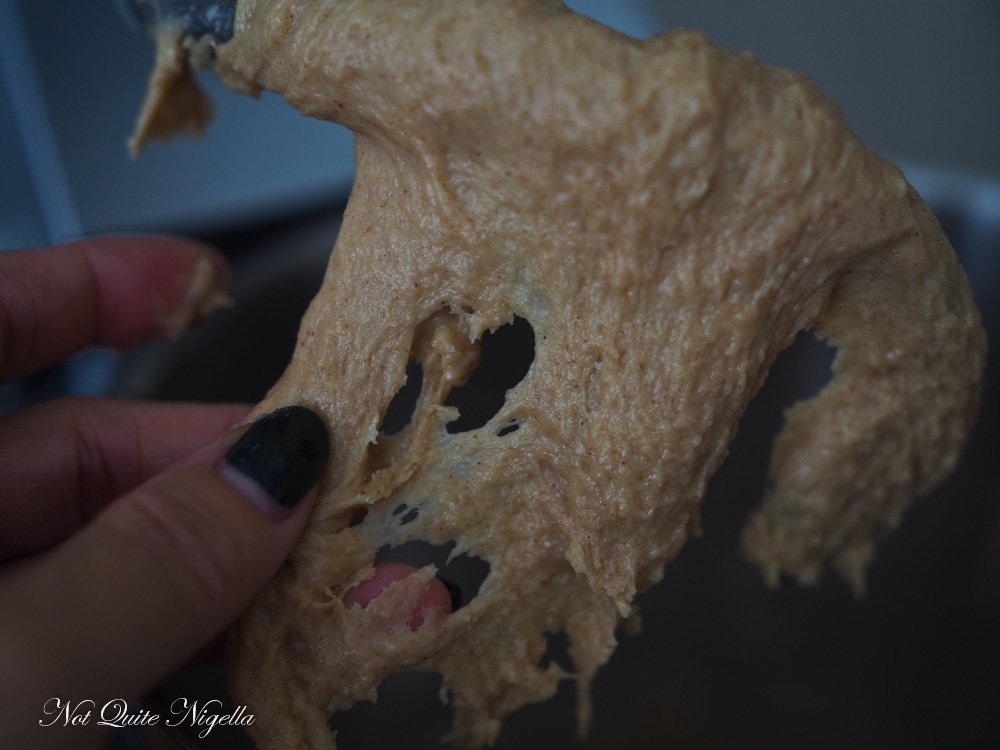 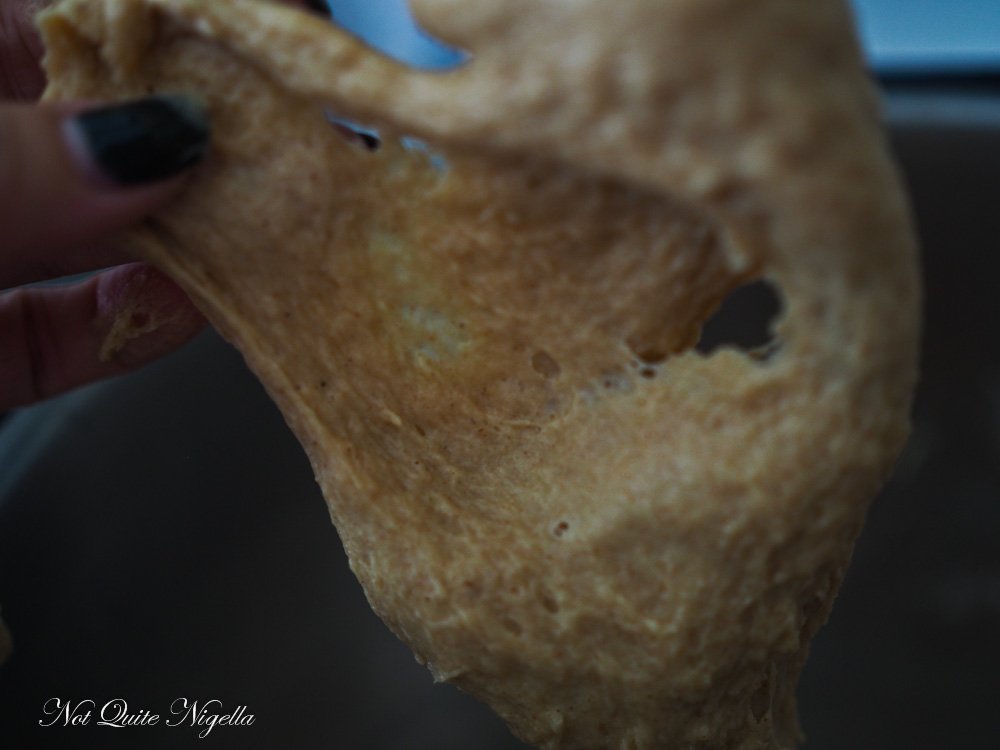 Step 2 - In the bowl of a mixer fitted with a dough hook mix the rest of the flour, the yeast, cinnamon and vanilla. Add the tangzhong mixture and the butter to the flour and stir with a spatula until combined. Then on the lowest speed possible knead the dough until it becomes very elastic. Mine took about 10 minutes on the lowest speed. What you want is the window pane effect-where you spread open the dough and it becomes almost see through without breaking. Sprinkle with some flour and then shape into a ball and then allow to triple in size, about an hour. 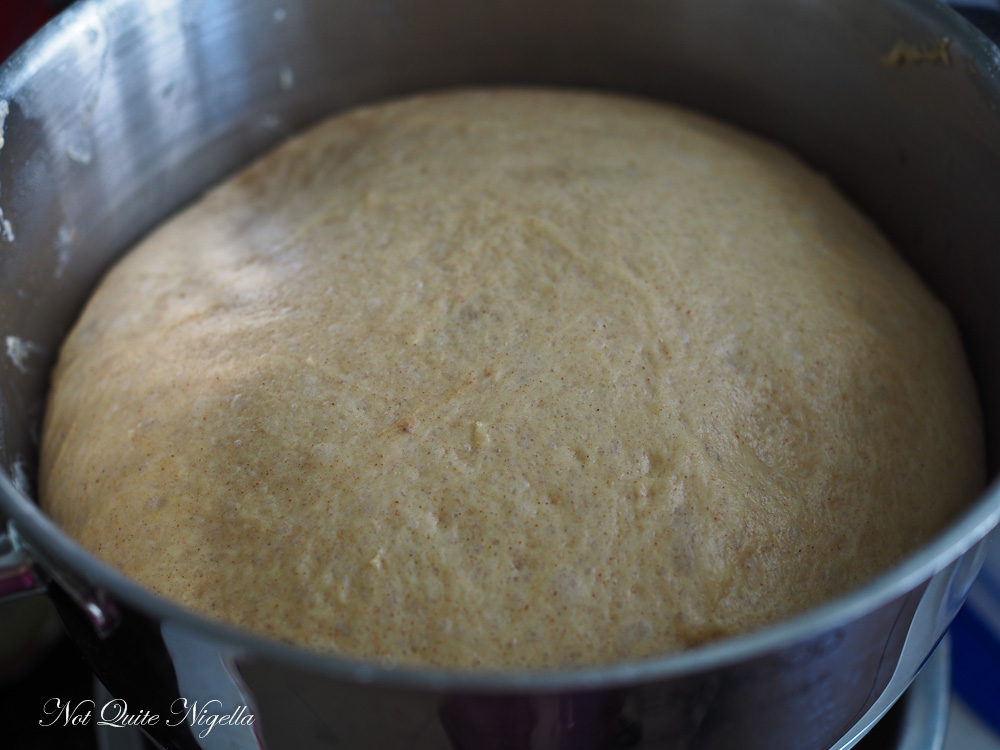 Step 3 - Punch down the dough and knead it again now adding the salt and the pieces of apple (my pieces were a bit too big). Now things get a bit sticky here. Preheat oven to 180C/350F and line a large baking tray with parchment. Flour a surface and shape a small handful of dough, they do rise so don't make it too big. Sit them next to each other. I got 17 buns out of the dough. It will be sticky but just use a bit more flour-the results will be worth it. 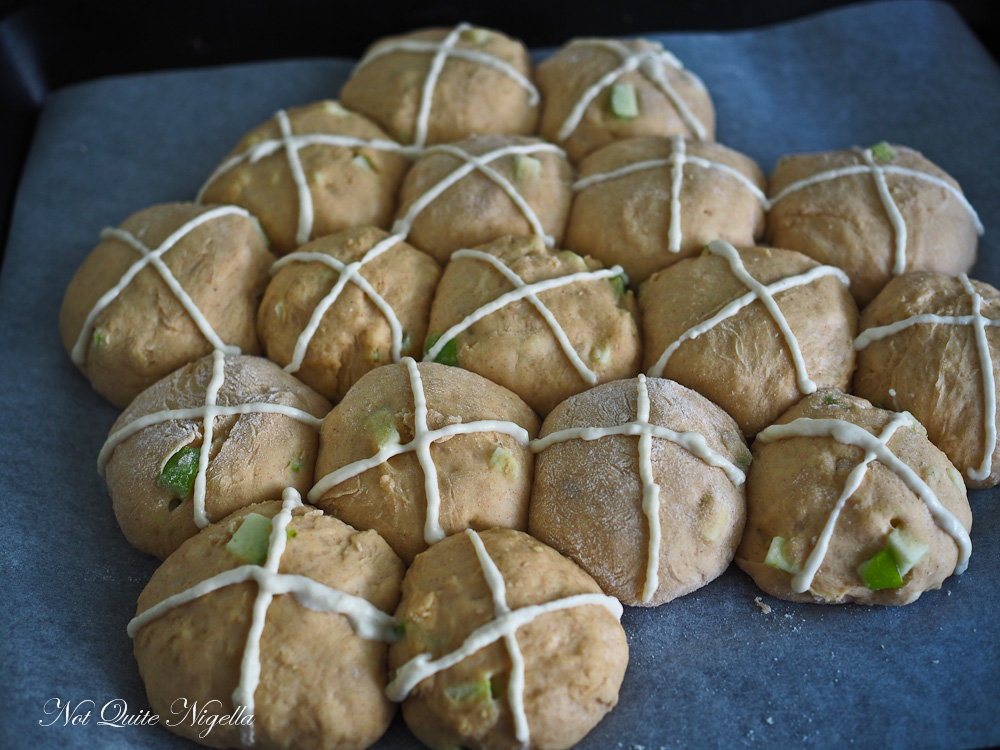 Step 4 - Mix the flour and the water together and place in a piping bag and pipe crosses over the buns. You don't need to give them a long rest now, just pop them straight into the oven and bake for 30 minutes.

Step 5 - When it has 5 minutes to go, mix the water, sugar and gelatine together. When they come out of the oven, brush with the glaze. Serve warm with some butter.