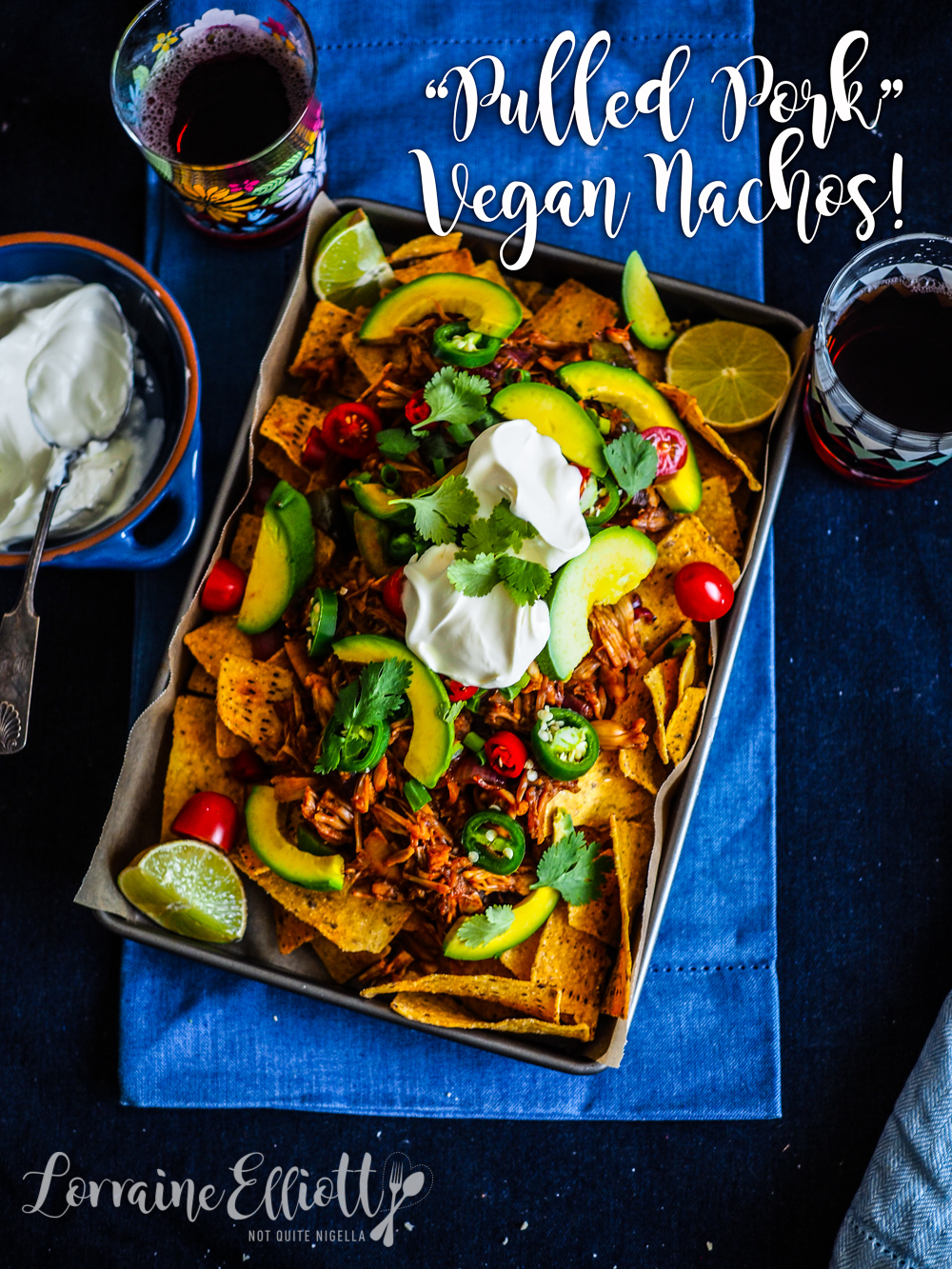 If you're looking to add more plant based food to your diet, then one of the easiest and best ways to replace chicken, pork or beef is with the humble jackfruit. It is easily found in Asian supermarkets and the texture of jackfruit resembles that of cooked meat. It is mild tasting and easily takes on flavours and sauces. These "pulled pork" nachos are a great and easy example of how to add more plant based ingredients without anyone really knowing!

Jackfruit is native to India although it is grown in many placs including South East Asia, South America and the East Indies and unlike it's spiky looking cousin durian, it has a mild flavour especially when young (i.e. not ripe and sweet) and tinned. You will need a larger Asian grocery store to find the right kind of jackfruit. Obviously for a savoury dish you don't want jackfruit in syrup. Instead look for young or green jackfruit in brine or water. Another added bonus is that it's very inexpensive. Each can I bought was $1.70.

There is one thing to note: jackfruit isn't a high protein source as it only contains a small amount of protein so make sure to look for alternate protein sources. You could add chickpeas to this dish because we're already playing around with nachos anyway. Okay that was just me playing mum for you ;)

For the past year I've been adding more plant based recipes to our weekly meals although I can't ever imagine not eating meat or seafood. But it feels better health wise to be doing this and it's not like we don't get enough protein when we eat out which is often 3 times a week. Our friends are much the same too. 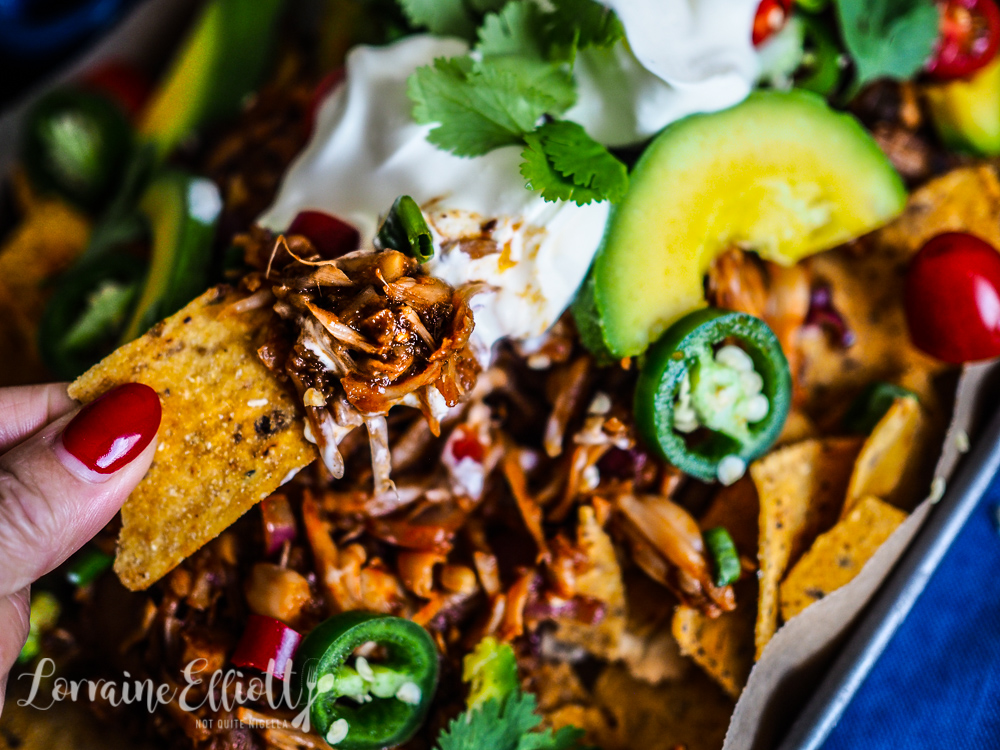 Lately we've been eating out with friends Ivy and Ryan a lot. Ivy and I get along very well although Ryan and I have a bickering sibling sort of relationship because we are both very opinionated and we have completely opposite views, especially politically. I think the reason why Ivy and I became friends was because we are both highly irreverent and don't mind making fools of ourselves and we just love to laugh.

One day we were out at lunch for mutual friend's Louise's birthday. Ivy was reading the menu and saw that dessert was described as "petits gateaux" and she asked what that was. I said that it meant small cake and she wondered why those two words were in French but the rest in English. I dared her to order it but in an exaggerated Southern accent (she's from Atlanta). When the waiter came around she looked at me and took a deep breath. "I'll have the pay-titz gay-toe," she said confidently in her strongest Southern accent while I cried tears of laughter.

The waiter didn't miss a beat, "I take it there's no French in your background?" which caused us to snort laugh so hard that I think I received the equivalent of a 10 minute abdominal workout. Tears were pouring down our cheeks and people probably thought we were drunk. Louise and others turned their head to ascertain the source of the ridiculous laughter. It was us, always us. Because you've got to laugh don't you?

So tell me Dear Reader, have you ever tried jackfruit as a meat substitute? Do you eat more plant based meals nowadays and if so, how often? And have you ever laughed so hard that you got an abdominal workout? 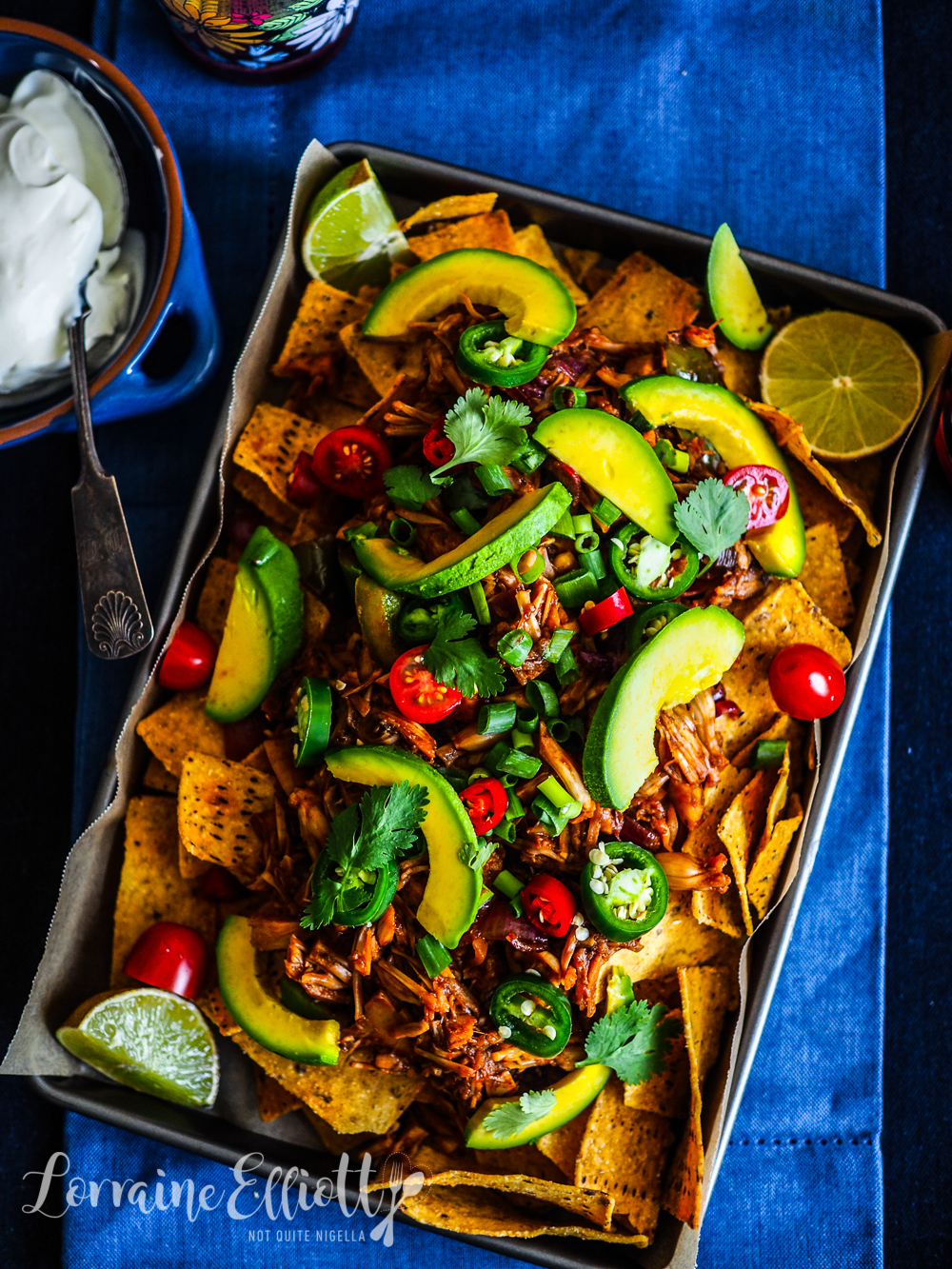 Make sure to choose young green jackfruit in brine or water and not syrup. This is found in larger Asian grocery stores 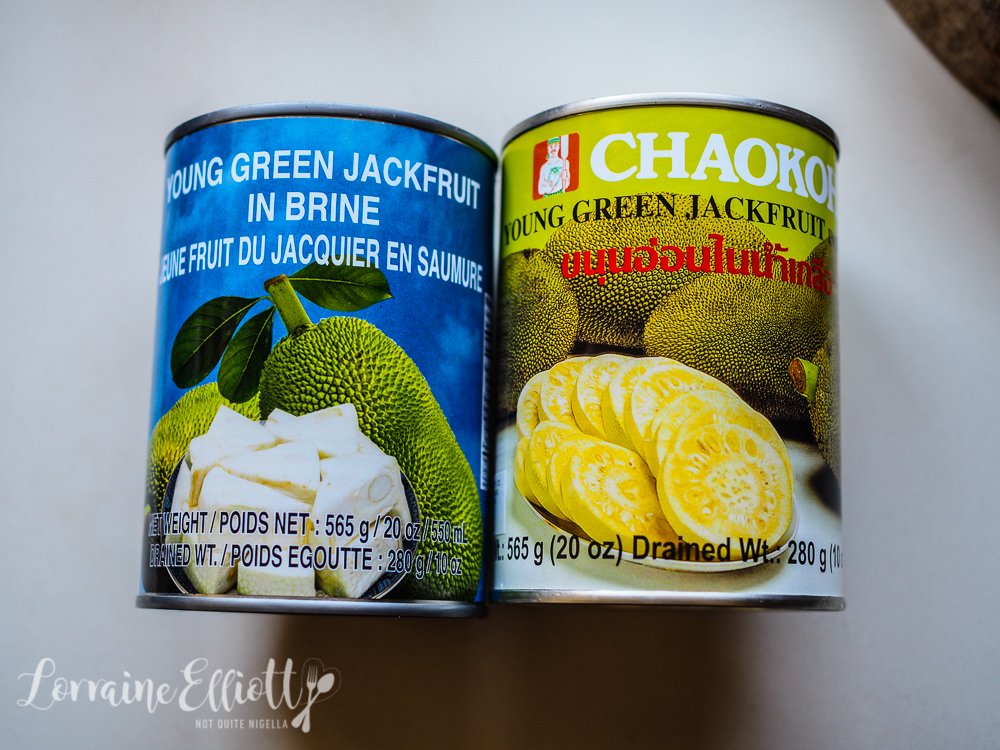 Step 1 - Drain the jackfruit and cut off the core aka the triangular pointy bit of each piece of jackfruit. You will be using the other, main part. Using a potato masher, mash the pieces of jackfruit. The texture once mashed will resemble pulled pork (albeit pale yellow in colour). 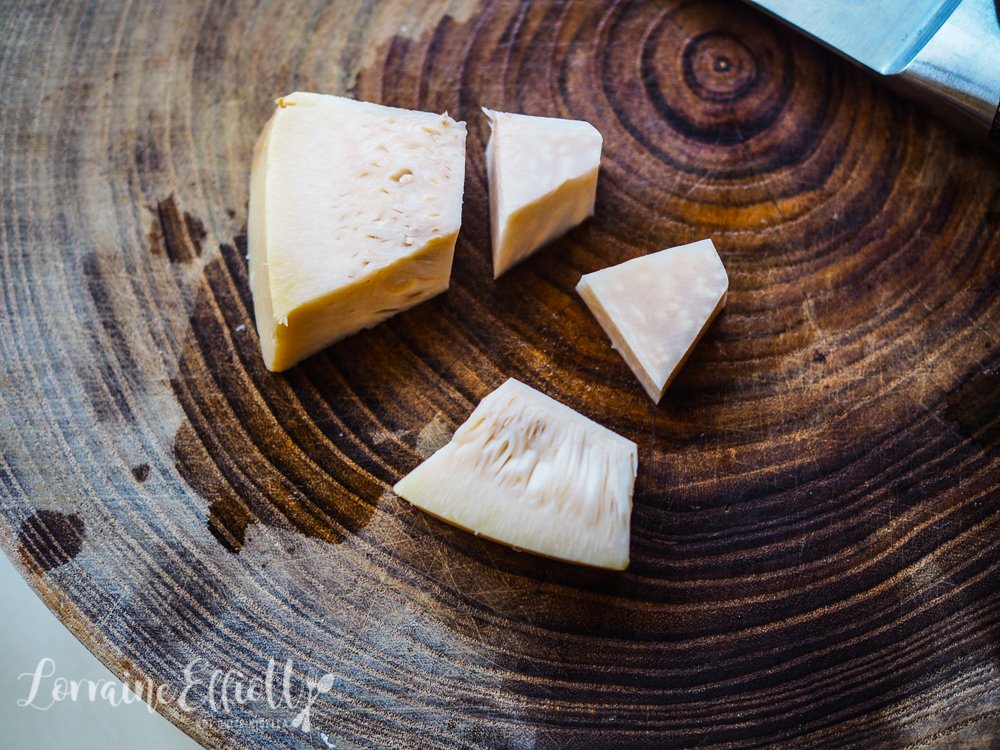 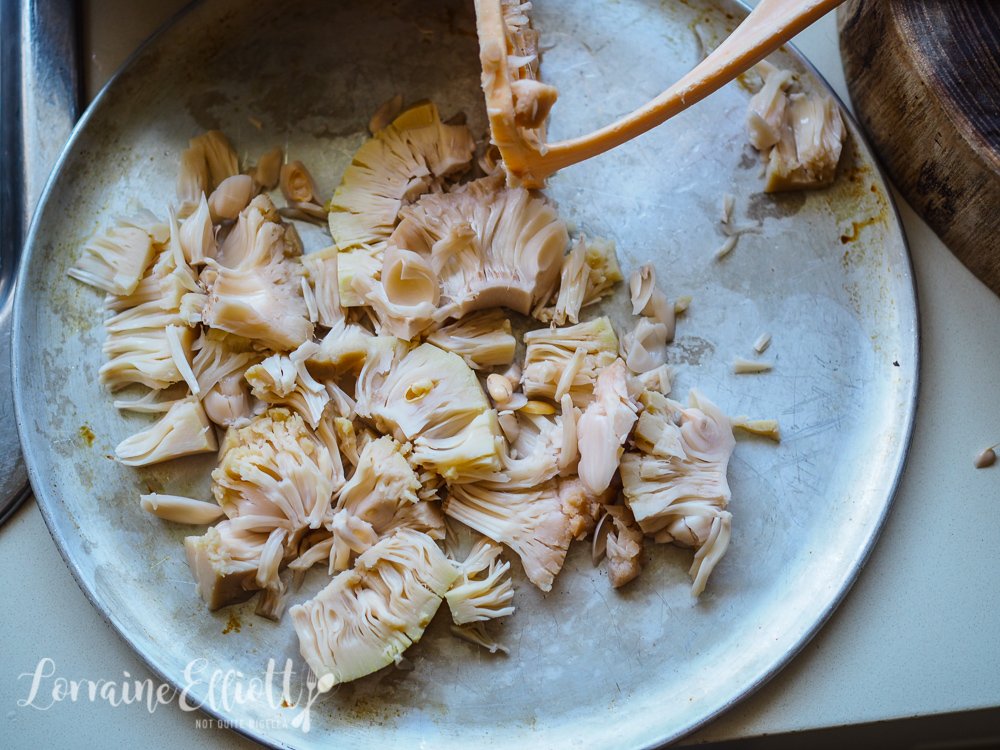 Step 2 - Heat oil in a large frypan and saute the onions until translucent. Add the garlic and fry for a minute. Then add the jackfruit and fry until a edges are a little browned. Add the two sauces and sugar and stir fry for a few minutes. Then add the liquid smoke which helps bring it all together. Taste for seasoning-as the jackfruit is tinned in brine it may not need much salt. 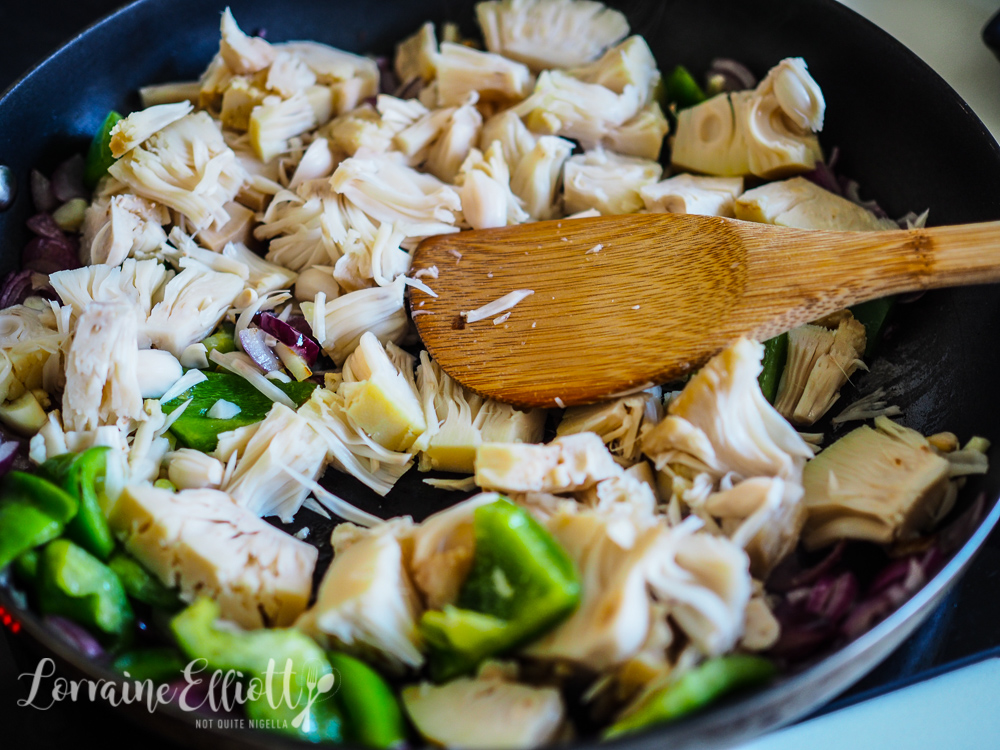 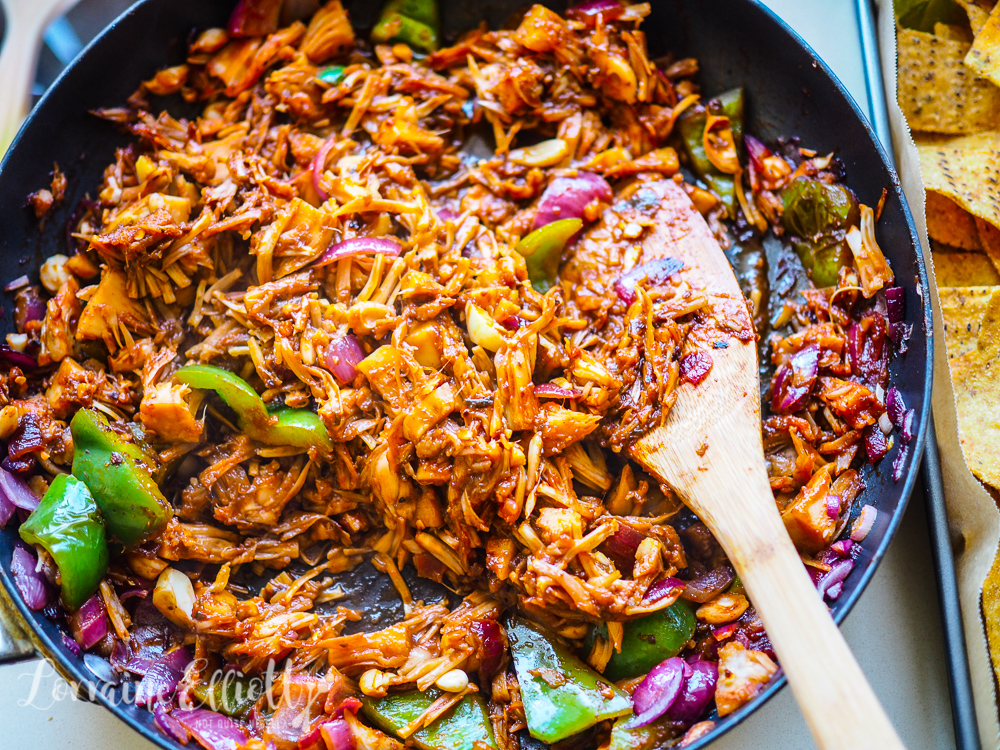 Step 3 - Lay out the corn chips on a serving tray or baking tray. Spoon the jackfruit over it and top with avocado slices, chillies, coriander and green onions.