Food Hack: How To Make Garrett Popcorn's Chicago Mix That Tastes Like The Real Thing! 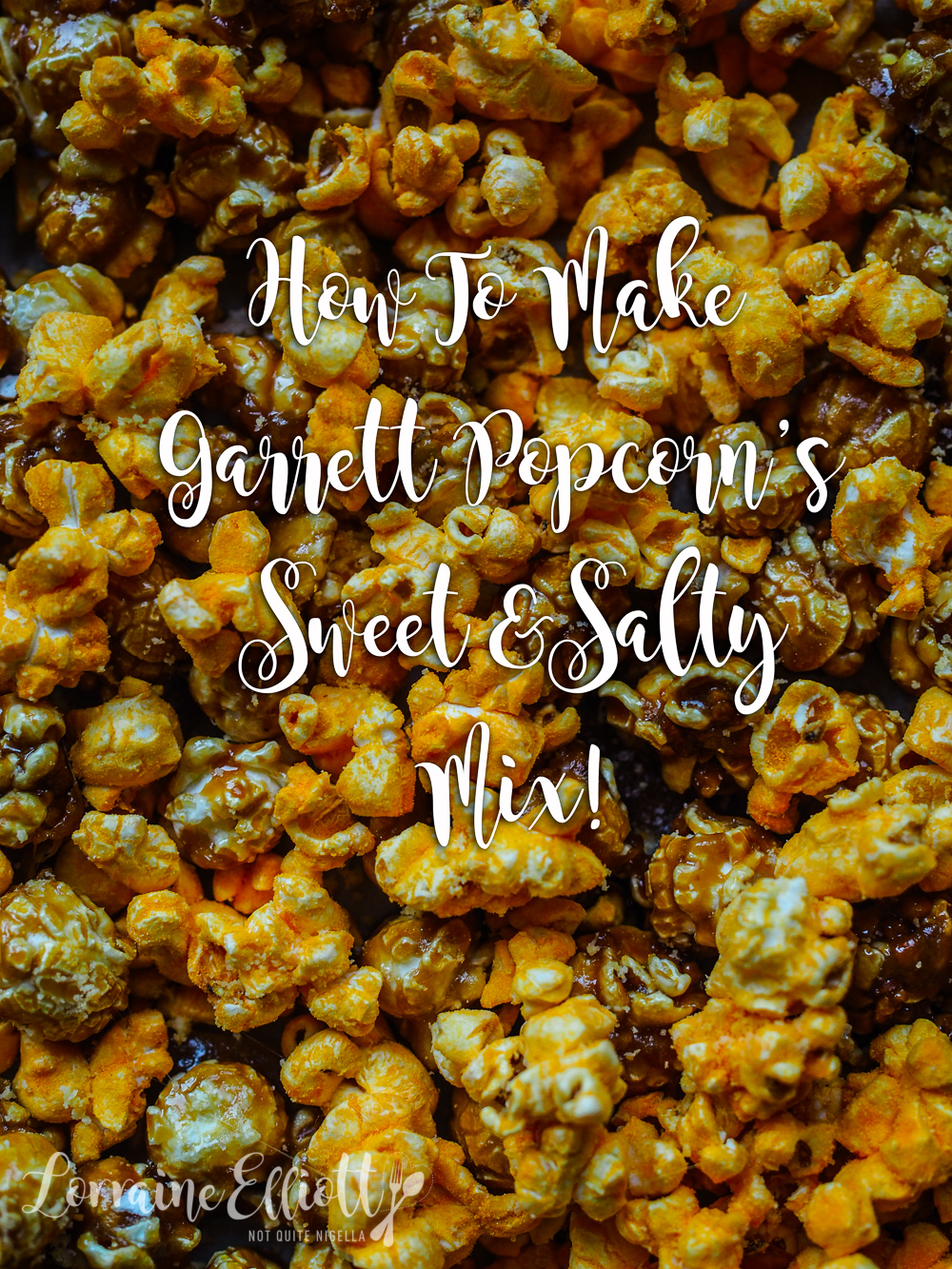 Dear Reader, for the past two weeks I've been busy studying and eating. No haven't gone back to university, but I've been studying Garrett Popcorn and trying to recreate this amazing popcorn at home far away from Chicago. You see when I am besotted by something I can't think of anything else and I think I may have put on a kilo or two testing popcorn in my pursuit of this. And I think I have something very close to Garrett's sweet and salty Chicago mix! Get ready to nerd out on popcorn Dear Reader!

First is the bad news: the popcorn scene in Australia is not great. I've tried all the popcorns available here and they ranged from terrible (Kettle, Red Rock) to trying hard but not getting anywhere near there (Coles Chicago mix). Mind you, I am comparing them to the best popcorn in the world so it's a high standard but I honestly really wonder why companies put out a product when it is so basic and boring (seriously peeps, contact me and I'll help!). 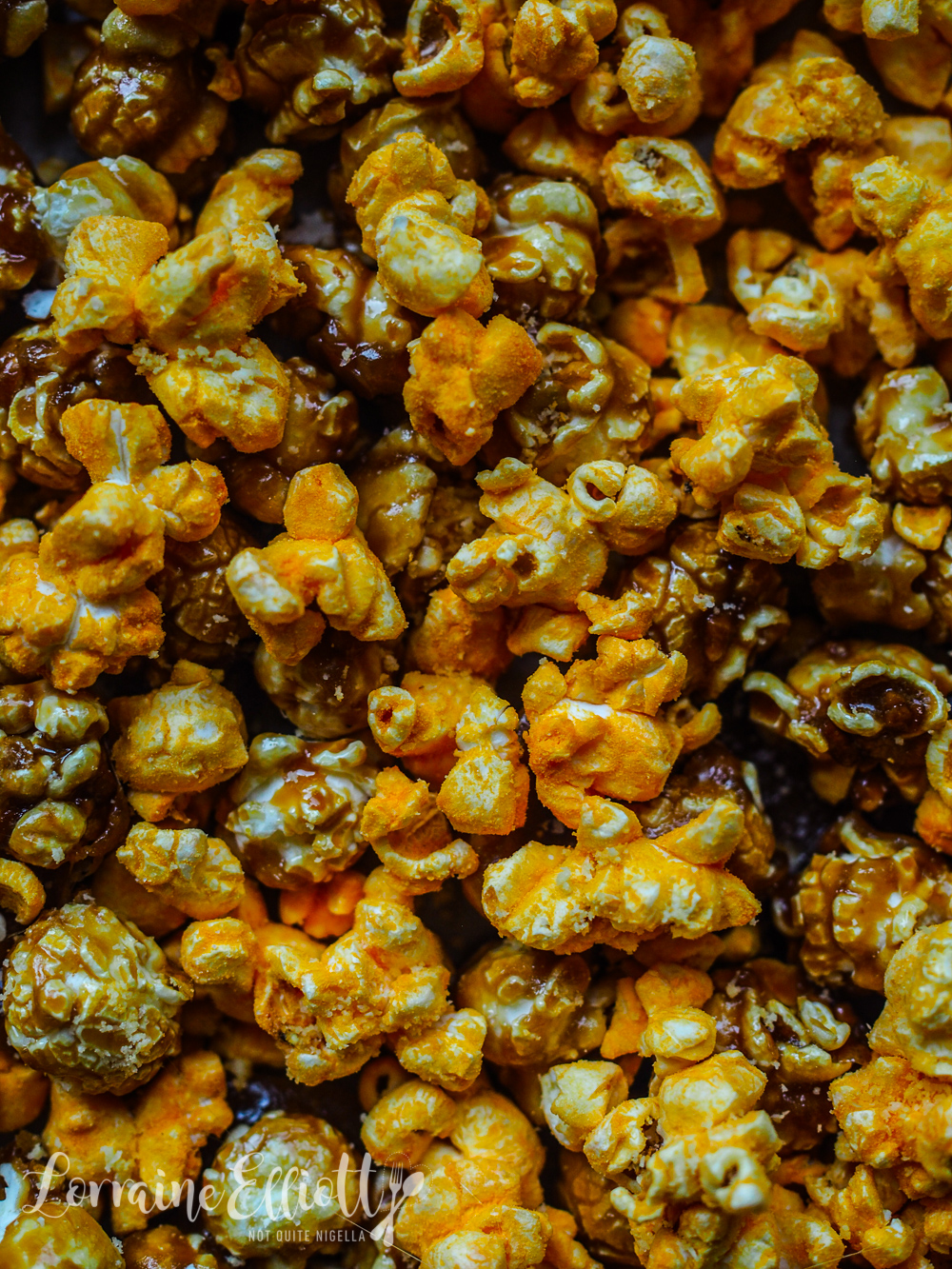 But then there is good news. With a bit of effort you can make your very own Garrett Chicago mix! So I'll start with the basics about Garrett Popcorn's mix. Garrett's sweet popcorn is called caramel crisp and it's a delicious but simple recipe using brown sugar, corn syrup, butter, salt and popcorn. The key to the caramel crisp is that every kernel of corn is beautifully coated in caramel - not lightly coated but well coated. 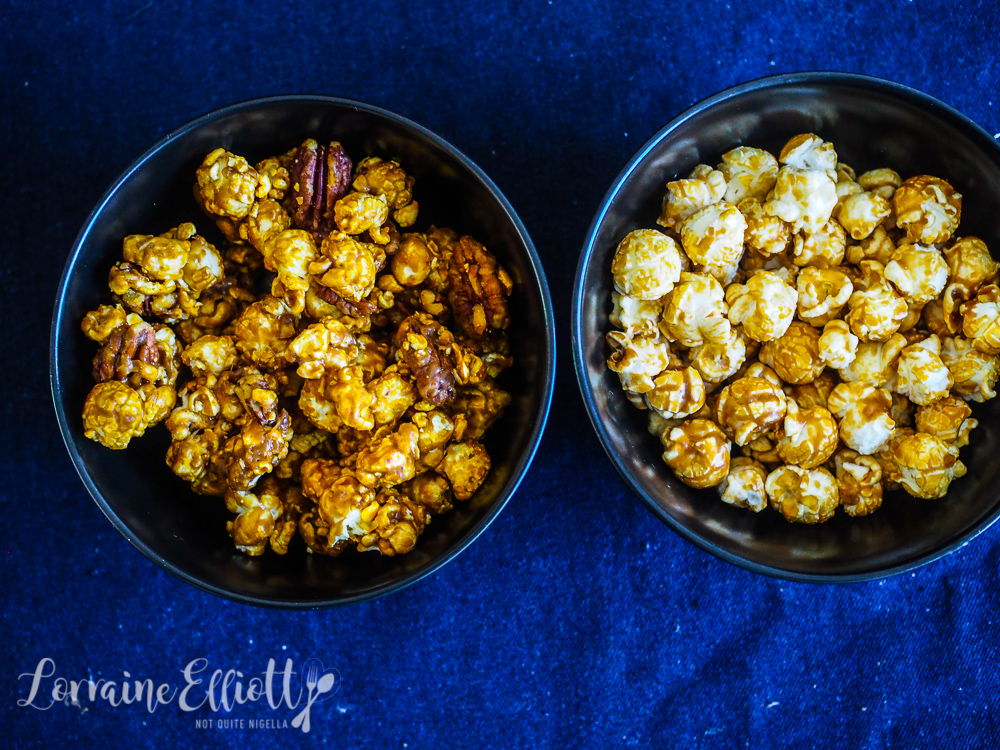 The closest I came to the caramel crisp was from Aldi's Blackstone caramel corn which was the most caramel coated of all the brands. But even then it wasn't anywhere near as caramelly as Garrett especially if you put them side by side as you can see above. So I re-caramelised it using the below recipe.

The cheese popcorn proved a bit more elusive. There aren't many brands of cheese popcorn on the market. I could only find Cobb's cheese popcornwhich was more butter flavoured than cheddar cheese flavour. There was also Pop Fiction brand which was so light on the cheddar it was almost non existent. You can buy cheddar cheese powder from Amazon but I wanted to make it using things you could buy here.

So I decided to make my own cheddar cheese powder using a dehydrator that my parents unearthed from their basement. It helps to have parents that never throw anything away. And just to show you what a weird kid I was, I had requested a food dehydrator as a kid so I could dry my own fruit. Honestly, I'm amazed I had any friends... 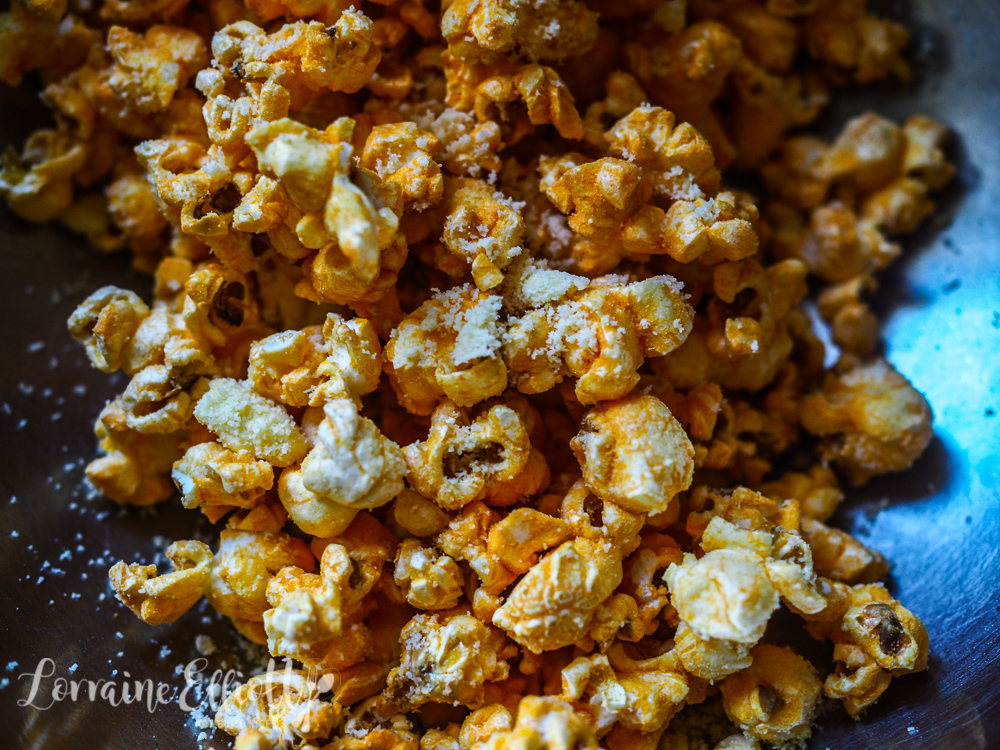 I used an aged vintage cheddar cheese and that seemed to be an advantage for time as the cheddar already had already lost a lot of moisture. You simply finely grate it and dehydrate it for 3-4 hours. My 6 layer dehydrator could dry 100g/3.5ozs of cheddar and made a delicious cheese powder. Still, it didn't taste like cheddar cheese powder but when I added it to the Cobb's cheese popcorn with some salt, it tasted like the Garrett cheese corn! I did a happy dance in my kitchen. 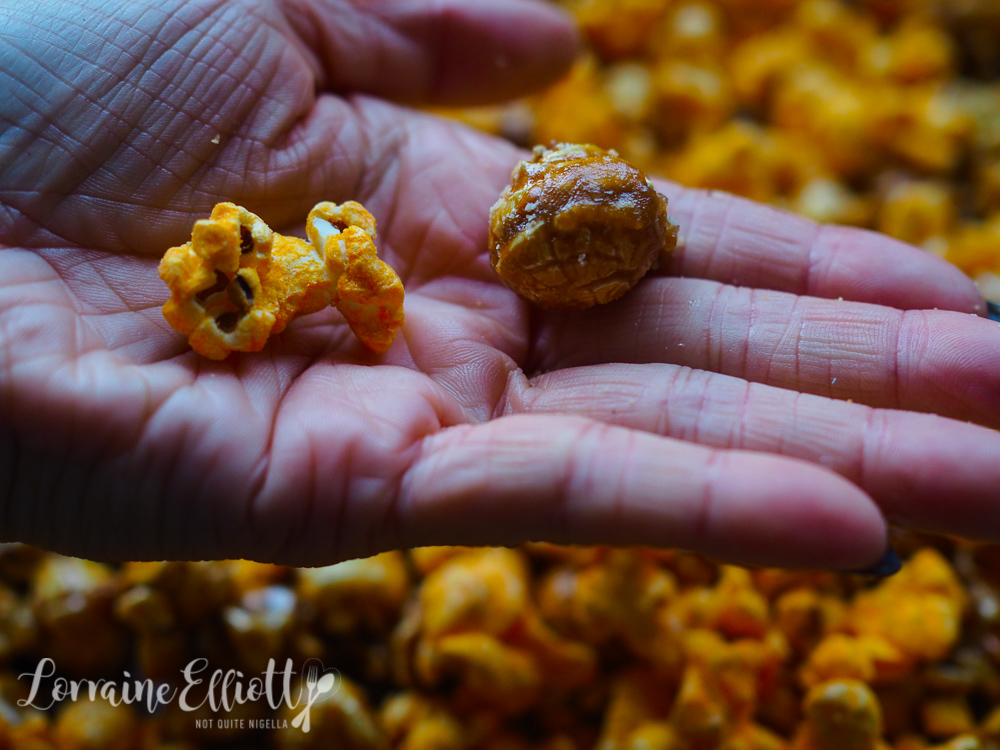 And then there's something that you may not have noticed. There are two different types of kernels in Garrett popcorn: a mushroom or rounder kernel and a butterfly kernel which is more splayed out. The mushroom is great for caramel because you get a lovely crunch when you bite into it and the butterfly is great for cheese coating because it has more surface area to cling to. And Garrett uses a 50/50 mix of each with each flavour.

But when you buy popcorn in Australia, you don't get this mix. Each brand only has mushroom kernels or butterfly kernels and popping corn is butterfly kernels. And then you've got each brand's individual flavours. So we had a bit of a mess and a lot of popcorn in our house. 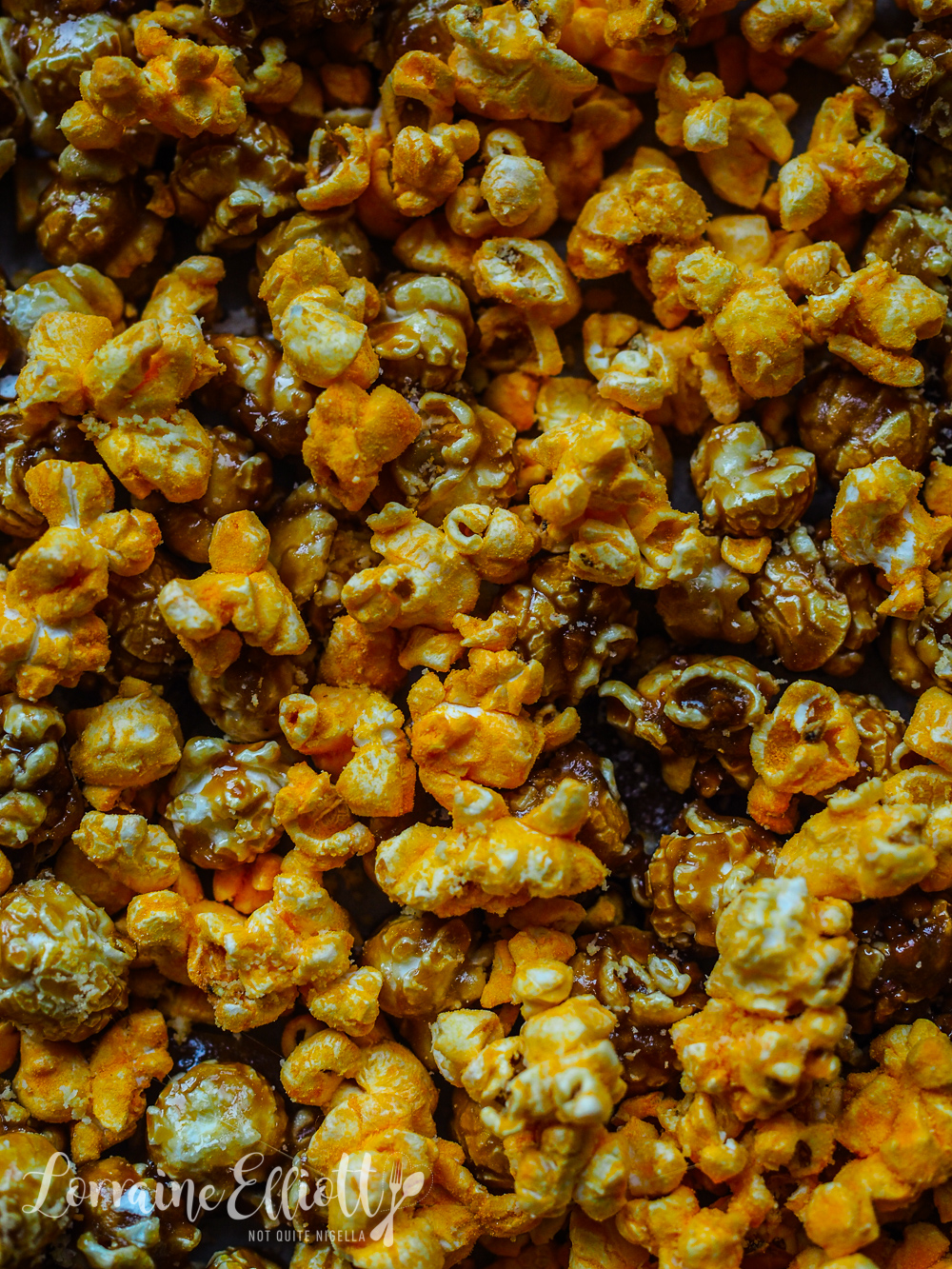 With all of this popcorn, I gave Mr NQN bags and bags of it to take to work because as a popcorn lover I couldn't have it around me as I'd compulsively snack on it. But I have kept something-my precious cheddar cheese powder. I may share that with a loved one or I may honestly just eat it with popcorn myself ;)

So tell me Dear Reader, do you like popcorn? Have you ever tried Garrett Popcorn? And what ratio would you have with a sweet and salty mix? Would you have more sweet or more savoury? Were you a weird kid?

A visit to Garrett Popcorn on Chicago's Magnificent Mile

A Garrett Popcorn Hack For People That Can't Buy The Real Thing! 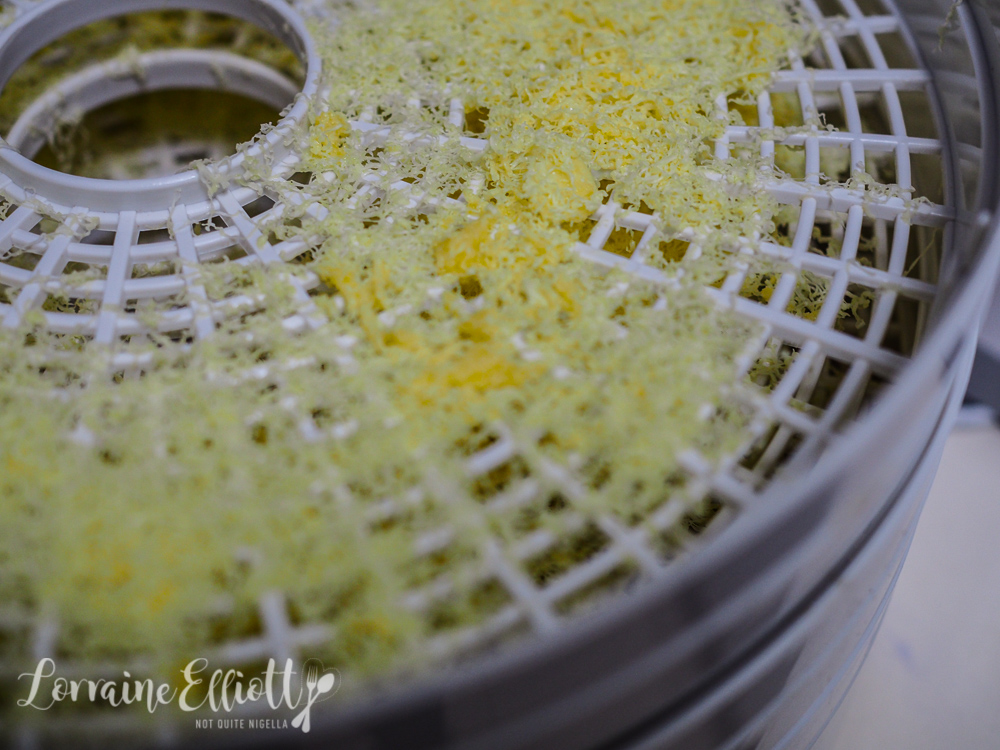 Step 1 - Use a super fine grater to grate the cheese directly on the tiers of a food dehydrator. Turn on and dehydrate until it becomes brittle-mine took around 3-4 hours. Place in a spice grinder and grind until fine. 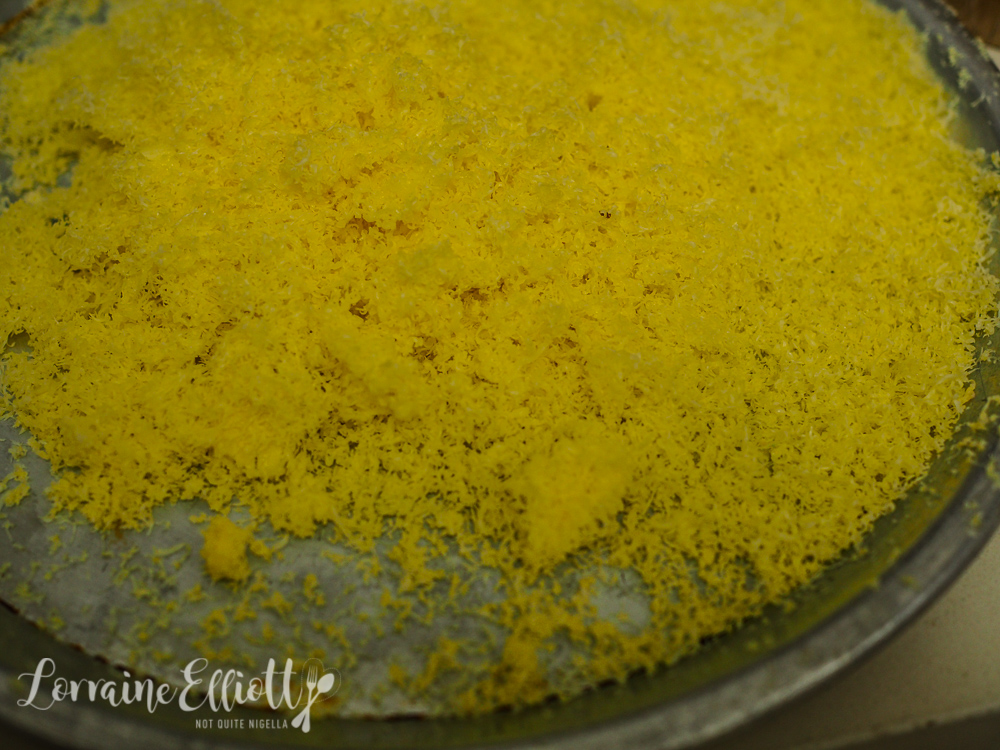 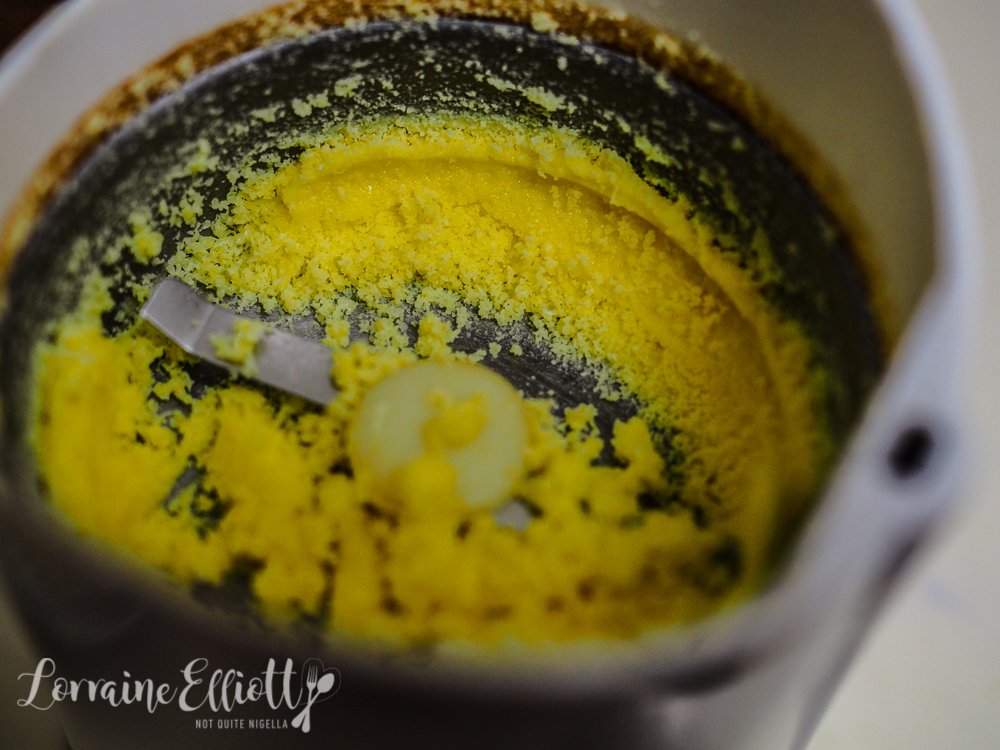 Step 2 - Preheat oven to 120C/240F and line a tray with parchment (you can also do this the same time as you bake the caramel corn). Spray the popcorn with oil spray and toss well in the cheddar powder. You want to get the powder in those little crevices. Season with salt (Garrett cheese corn is quite salty). Bake for 10 minutes. Note: cheese corn does tend to get stale quickly within 24 hours while caramel corn has a little longer as the caramel keeps it crunchy. 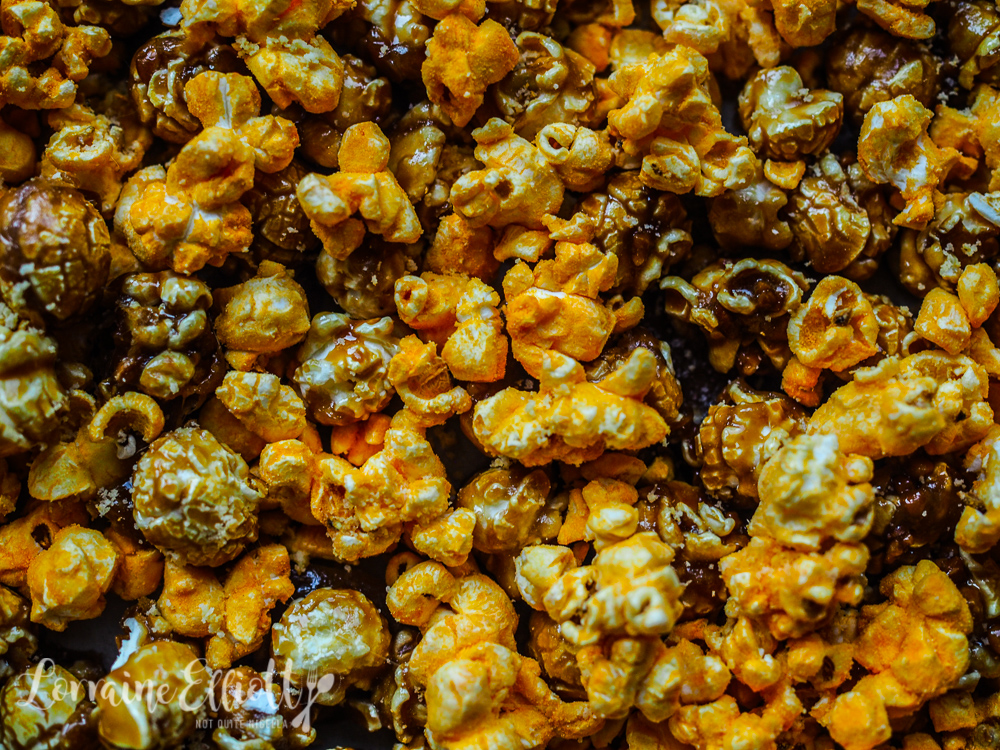 Step 1 - Preheat oven to 120C/248F and line a baking tray with parchment. Heat the brown sugar, syrup and butter in a heavy bottomed saucepan on medium to high heat and stir. Boil until it reaches 140C/284F. Place the caramel corn in a large bowl and pour the caramel over stirring it to distribute it.

Step 2 - Spread out onto the tray separating the pieces (careful it will be quite hot). Bake at 120C/248F for 1 hour. Then combine with the cheese corn in whichever ratio you would like.