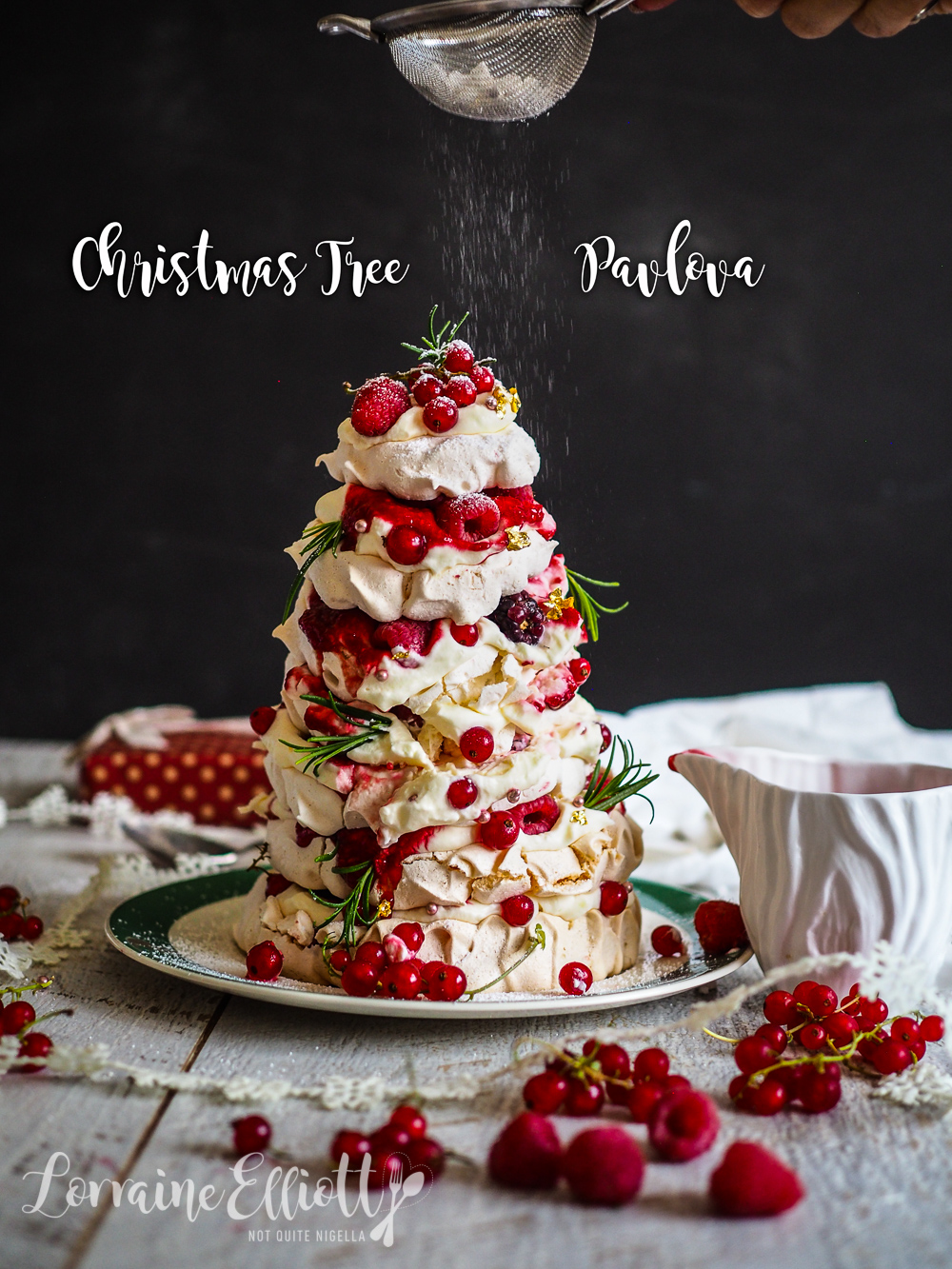 Celebrate Christmas with this spectacular 7 layer Christmas Tree Pavlova! This pavlova is a soft, fluffy and easy to portion up dessert made up of 7 layers of fluted meringue rings, whipped vanilla cream, raspberry sauce and fresh raspberries and redcurrants! I called her Jolene.

I know that traditionally a Christmas pudding is what you serve at Christmas but I feel that that's more linked to colder climates and snowy weather. I love making pavlovas and things that suit our summery Christmases more. I know you may scoff but this is pretty damn easy - okay straightforward rather than easy if you follow the recipe. 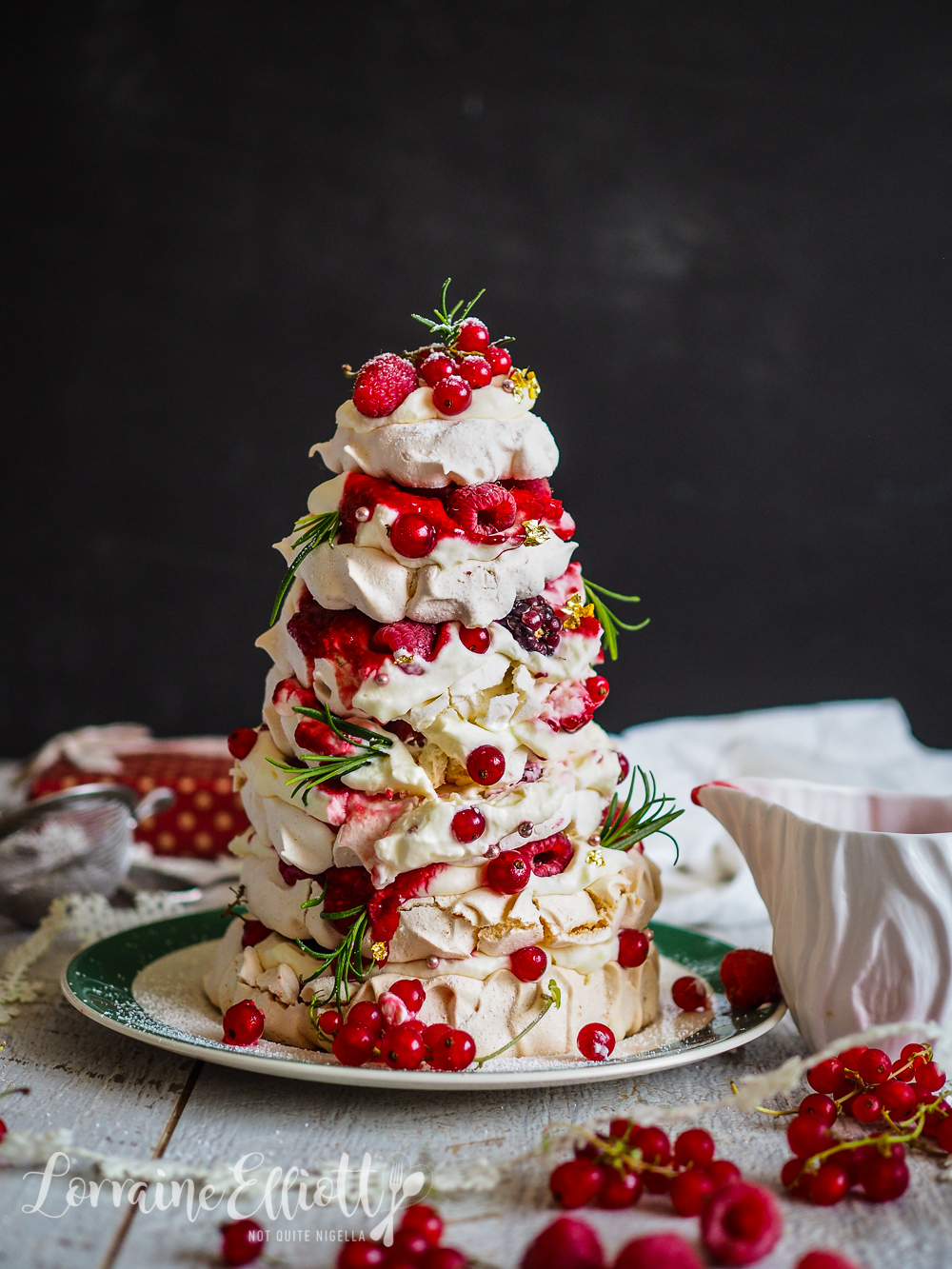 The only thing that I will say is that you want to assemble this just before serving it. A tower like this will collapse over time or in any sort of heat because of the cream. Assemble it at the spot or table that you want to serve it to avoid having to transport it. You can whip the cream, making the raspberry sauce and have the berries ready beforehand so it's actually not too bad at all.

Also if you have particularly irritating family members, it's a good opportunity to have a time out from them and do something else apart from argue with your uncle about Trump. I promise that this is such a rewardingly pretty cake and the bonus is that it comes already portioned so it's easy to share. Just lift off the meringue topped with fruit and cream in the size that you want. There will always be someone that wants the smallest and someone that wants the largest piece. I've been so excited to make this and counted down the days to make this pavlova Christmas tree cake. 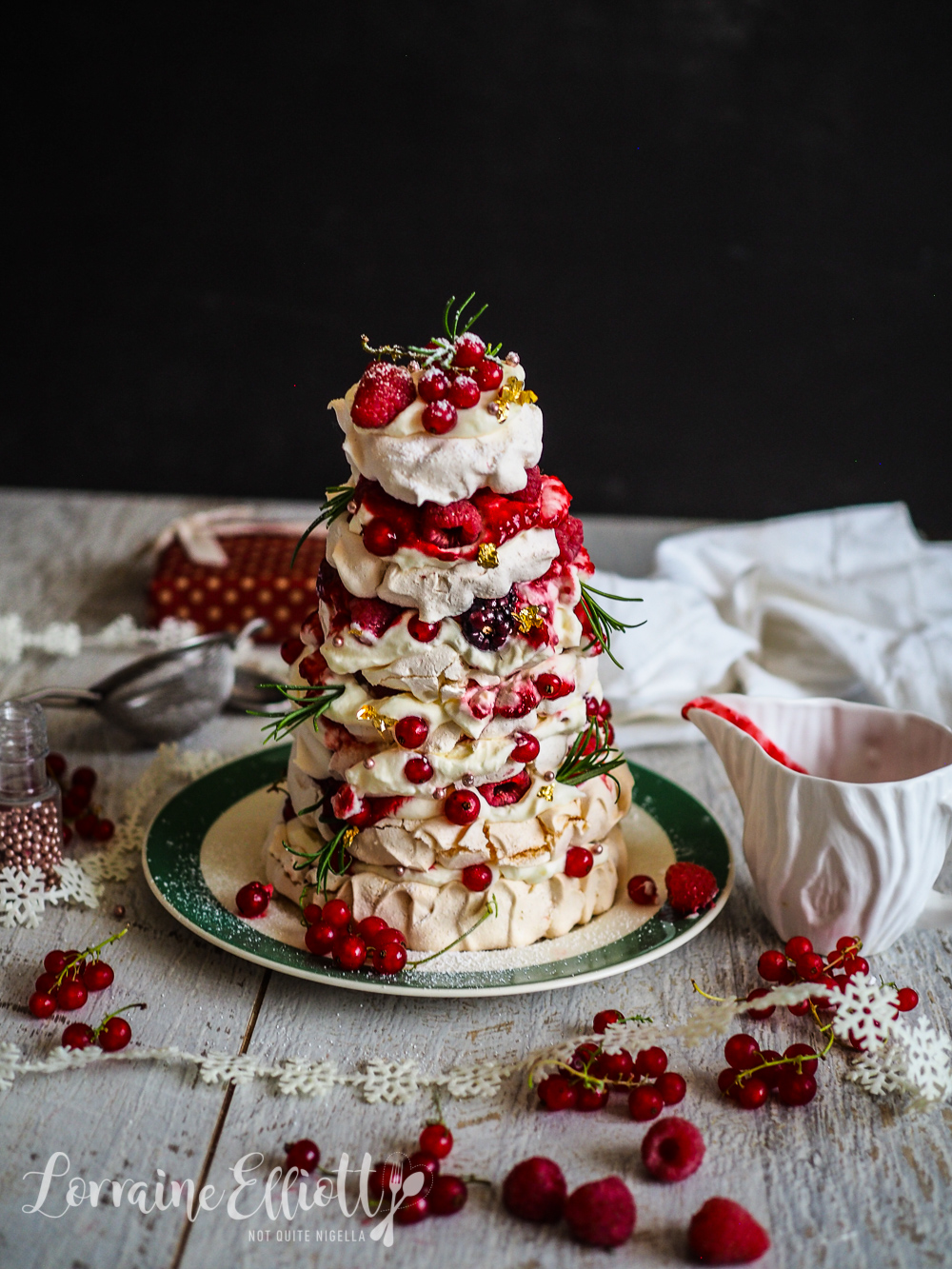 Speaking of days, last week it was Friday the 13th and also the day that I decided to make the pavlova. Usually I find that Friday the 13th is just a date, nothing terrible really happens then. However in the spirit of tumultuous 2019 (the year that sort of sucked in parts) it threw me a curve ball. "Woah, don't get too relaxed about Friday the 13th," it said to me.

It started off with waking up and getting a message that I didn't want to receive (I won't bother getting into that). Then I saw that tiny Teddy who was lying on the end of the bed threw up a round pile of vomit. 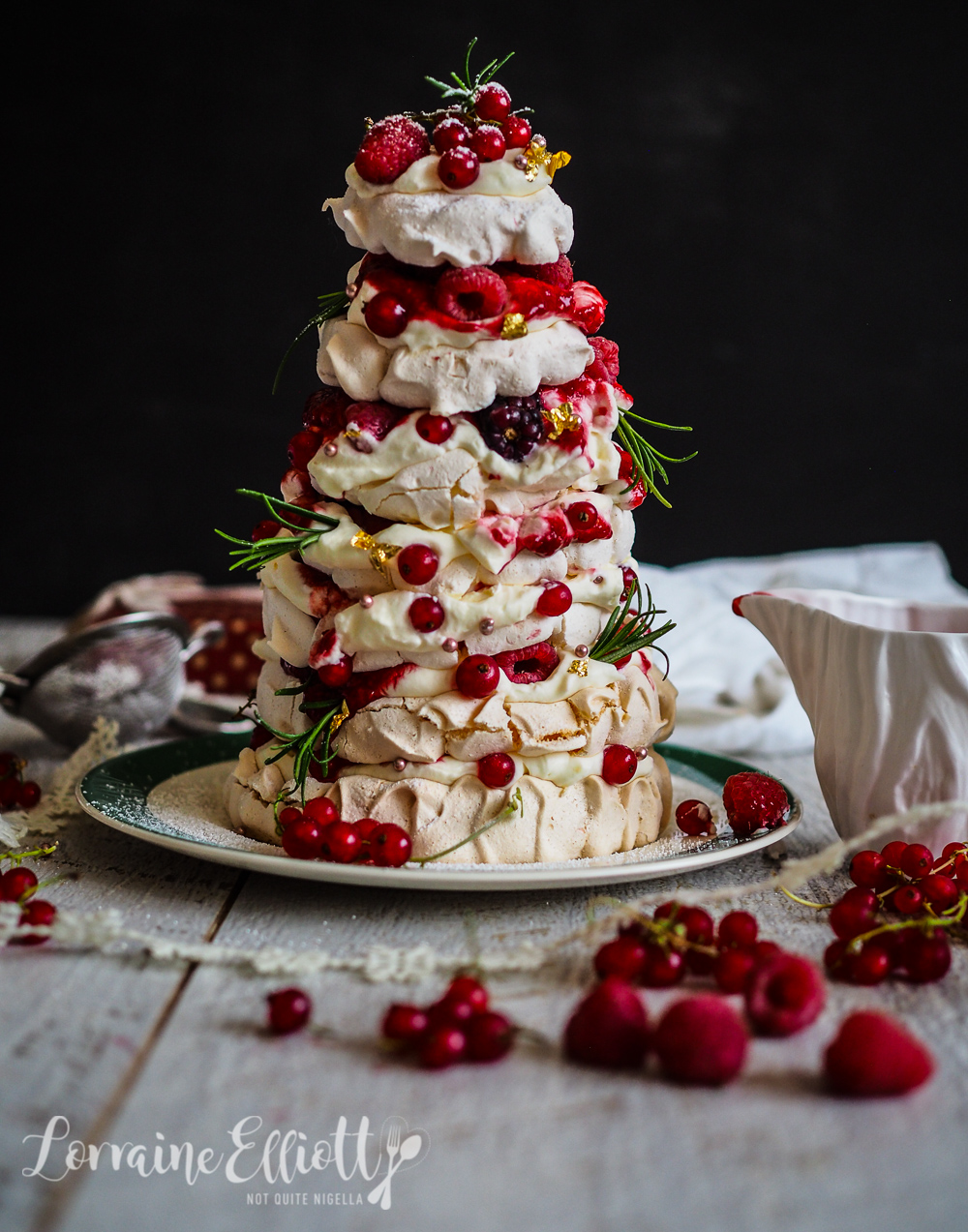 Like doggy parents do, we were concerned and wondered what had prompted it. Mr NQN found the source of the nausea. A couple of weeks ago Mr NQN sprained his ankle in Scotland and had some Voltaren in his bag. It turns out Teddy was ferreting in his bag and he loves blister packaging. We don't know if he swallowed any-there were about half a dozen loose pills in his bed but chances are that he did because he was vomiting.

We weren't quite sure what to do. He was as spirited as ever but then an hour or so later when I came back into our apartment he didn't really stir to greet me and was listless so we took him straight to the vet. 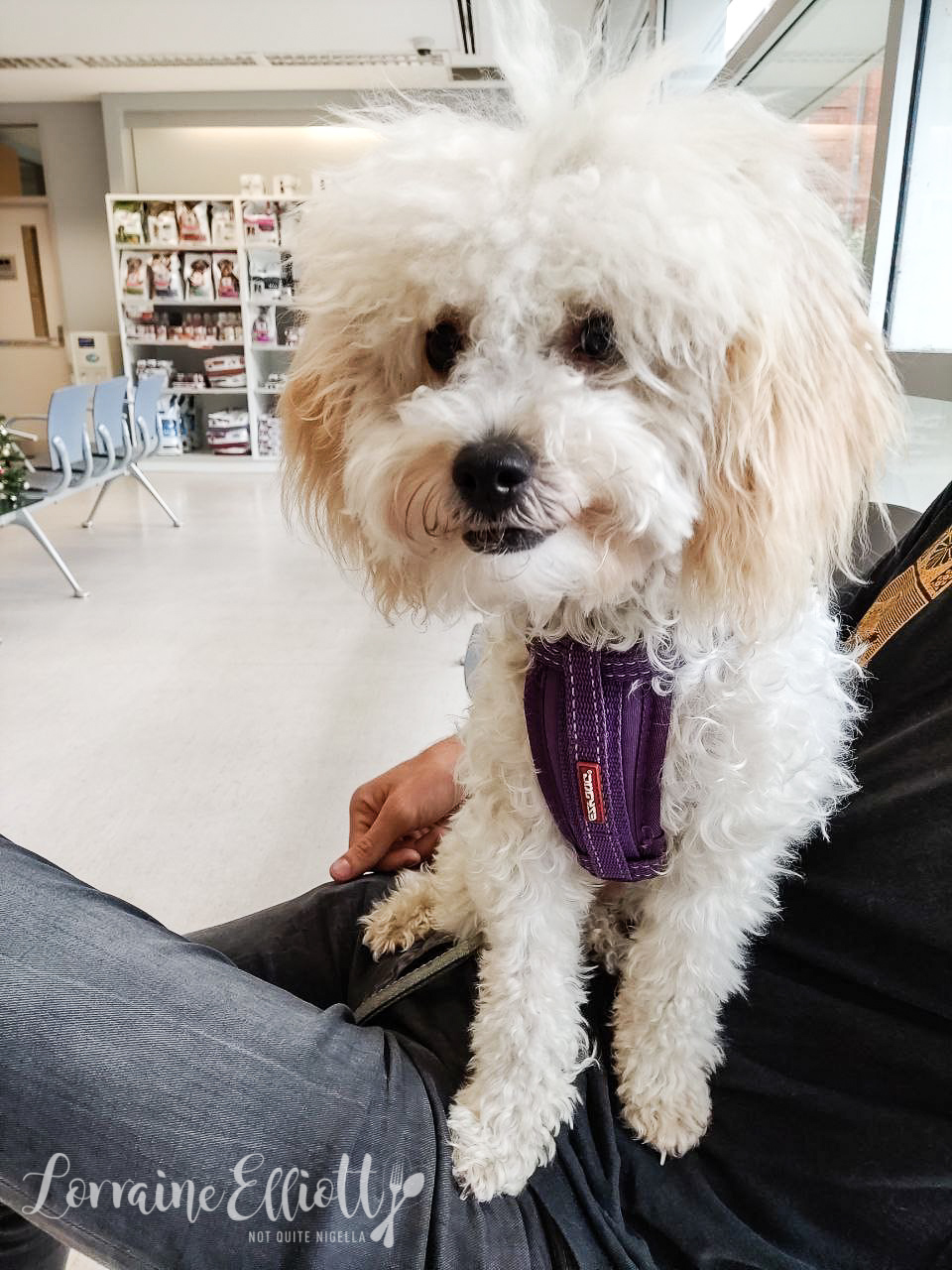 They explained that drugs like Voltaren and Nurofen eat at the insides of a dog and cause kidney problems. Teddy would have to go in for a 2-3 day hospital stay. Even as he was going in, he was still smiling Teddy. So far, it has been 3 days, he is stable and he is eating and drinking well. But please keep Teddy in your wishes if you can!

So tell me Dear Reader, have you ever had a bad Friday the 13th? And what is your big Christmas dessert this year?

Step 1 - The meringue is best made the day before. First trace out the circles on two sheets of parchment and place on two large baking trays. I used cookie cutters as a circle guide going all the way from 4cm to 11cm. You will need to measure them to accommodate a bit of spread but as long as your meringue is made properly, they won't spread much. I traced and made 8 rings but my pavlova tower could only take 7 rings or it threatened to unbalance. Preheat oven to 200C/400F. 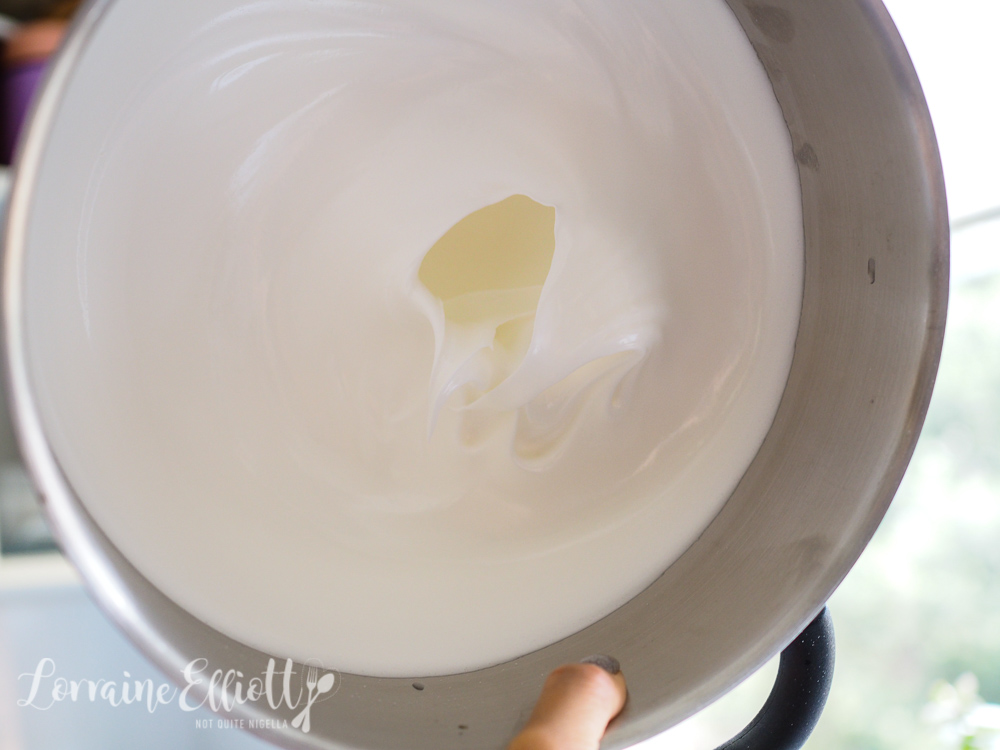 Step 2 - In a very clean mixer bowl, with very clean whisk, add the egg whites, cornflour and vinegar and whisk until foamy and starting to get soft peaks. Add the sugar in 3-4 lots along with the cream of tartar and whisk until very stiff-the bowl should be able to be tipped upside down and the meringue should not move. 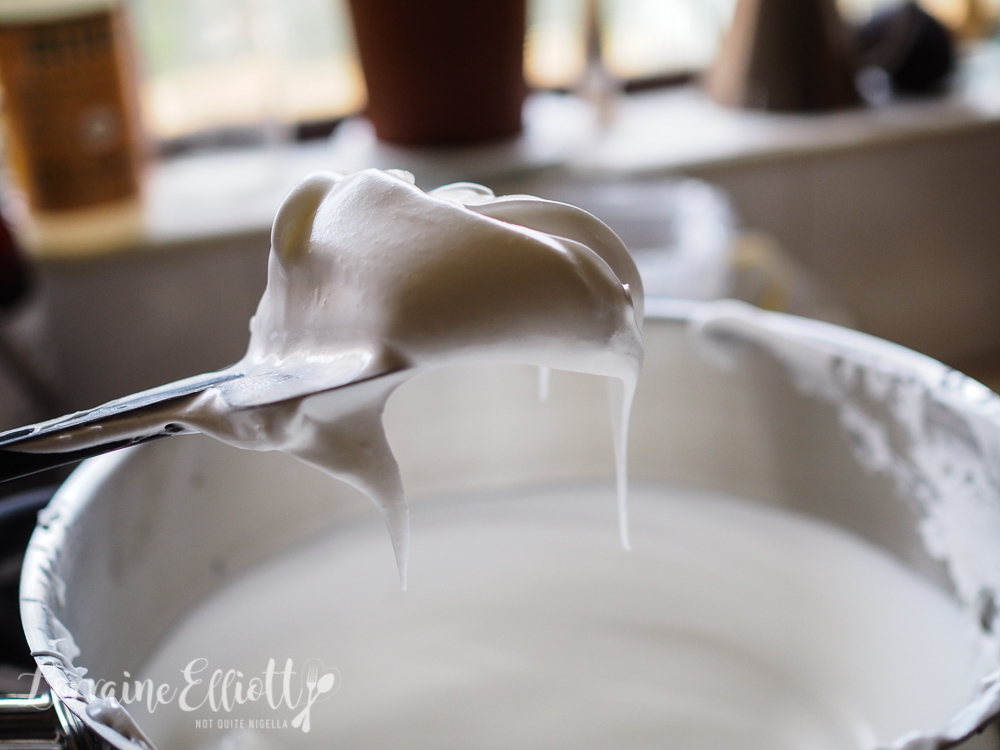 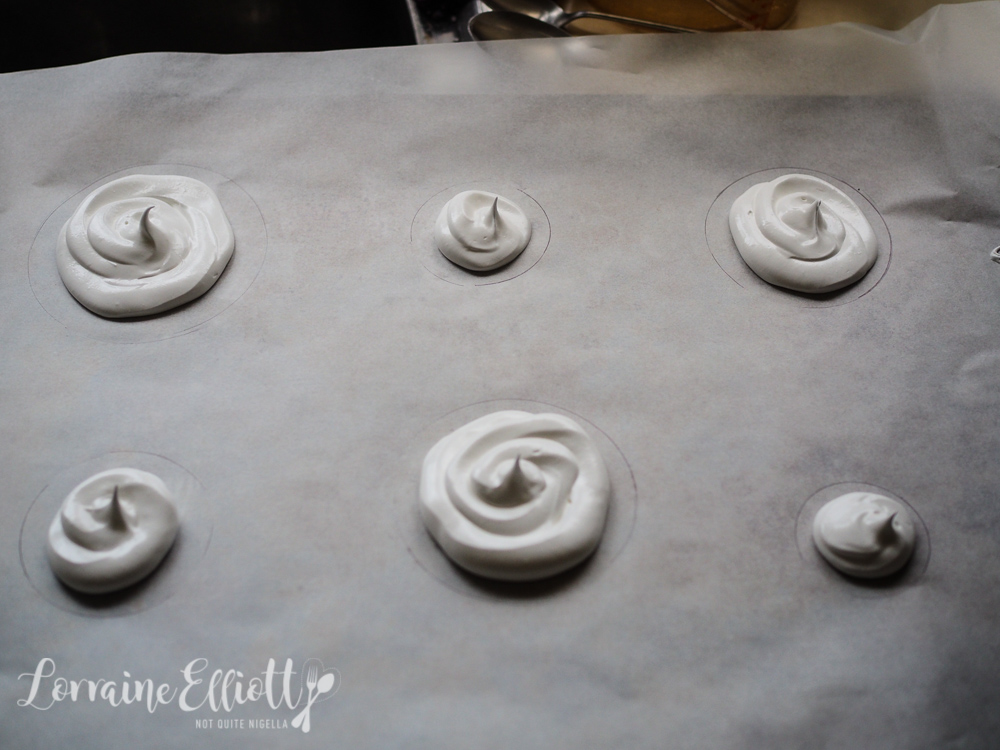 Plain tip to make the circles (leaving a small gap)

Repeat with all of the circles and smooth them down with a palette knife-you don't want any sharp bits sticking up. Place in the oven and immediately turn down the temperature to 130C/260F and bake for 1 hour or until you can carefully lift each circle off the parchment (the bigger ones will be the most challenging to lift, especially towards the centre). Cool completely in the oven. 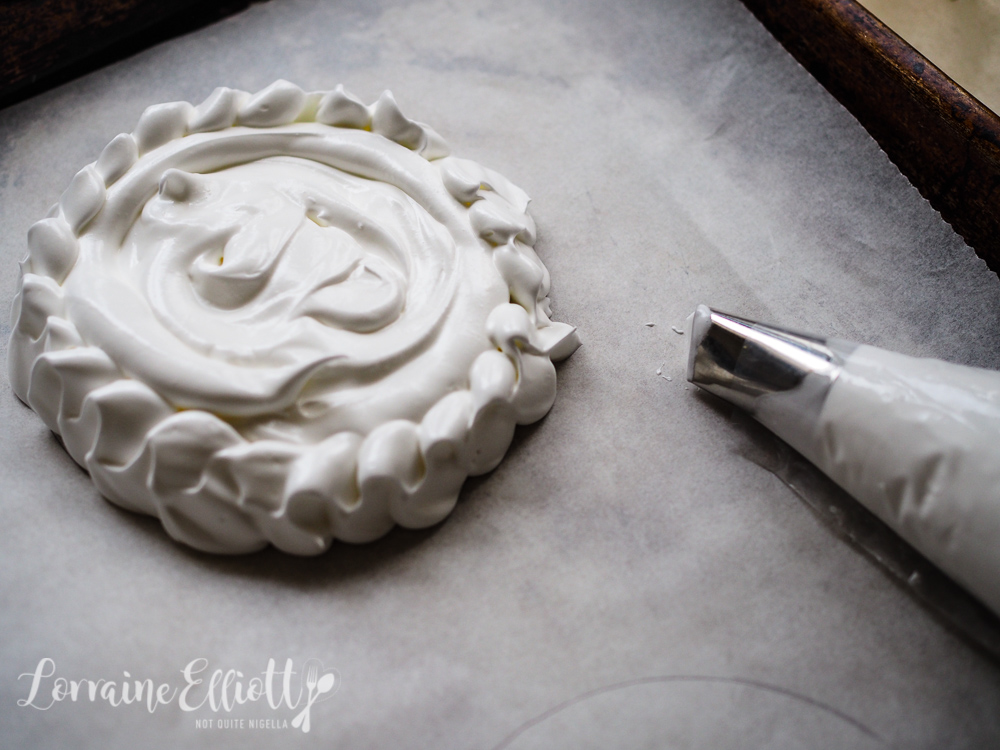 Then #4 tip to make the fluted detail around the edge 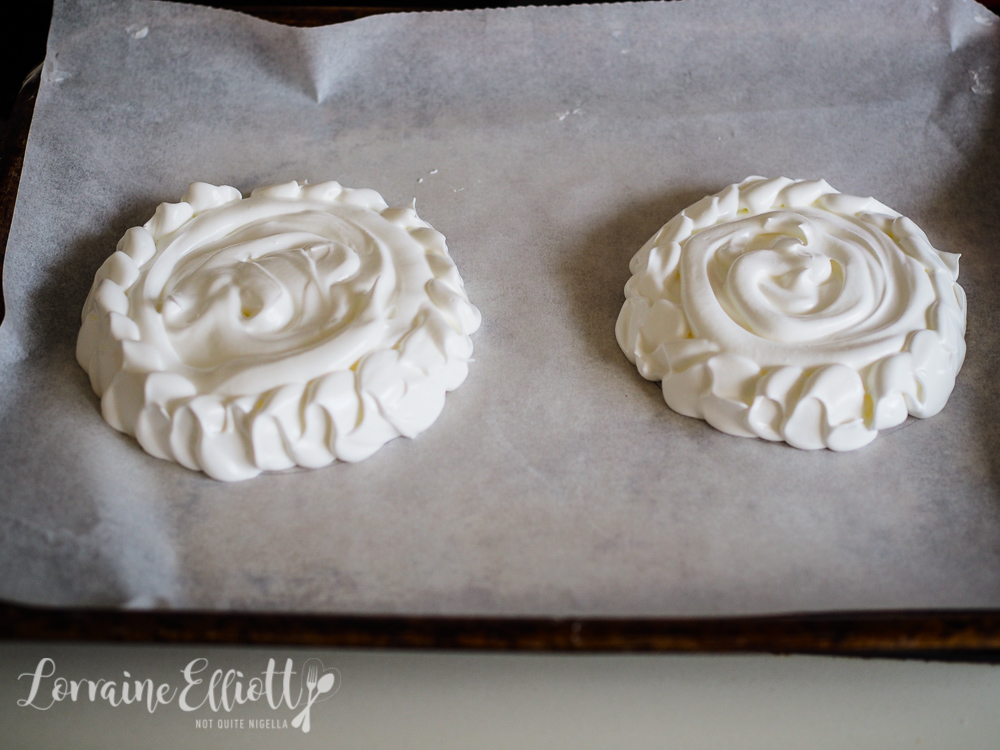 Step 4 - Whip the cream with the sugar and vanilla until you get cloudy, dollopy peaks. To make the raspberry sauce, puree the raspberries with icing sugar and set aside. To assemble the pavlova (do this literally just before serving), take the largest meringue disc and place it on a serving plate. Spread with cream and then add raspberry sauce and berries. 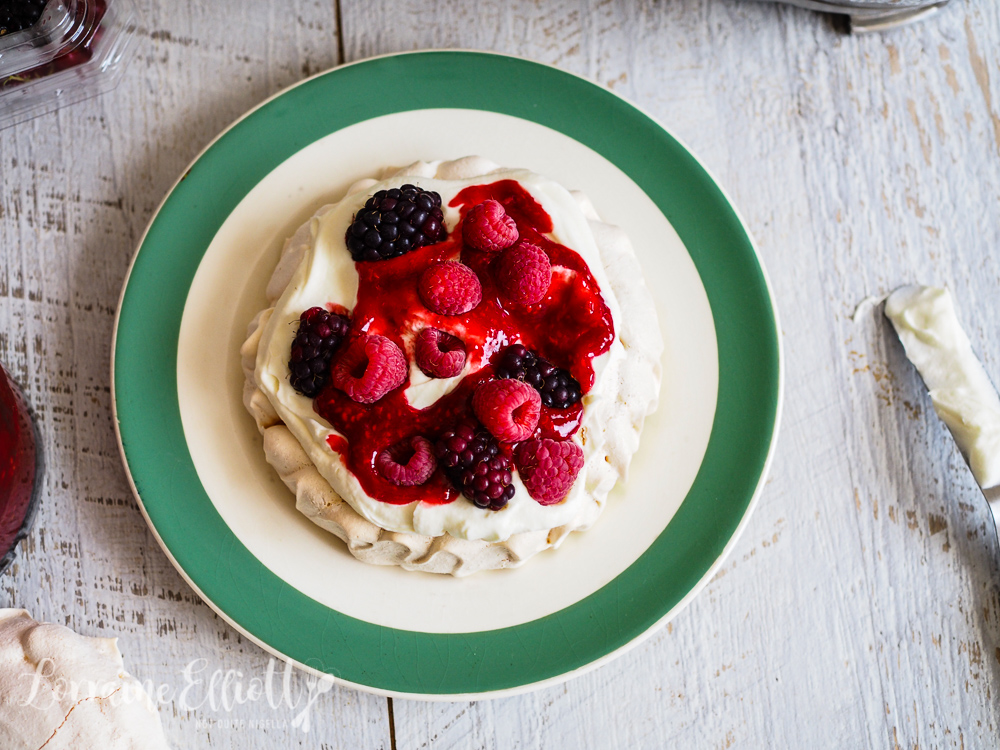 Step 5 - Try to make this as even as possible by pressing the berries down in the cream to create a stable base for your tower. Repeat with the rest of the meringue, cream and berries and decorate with rosemary sprigs, cachous and gold leaf. Sift icing sugar over the top. 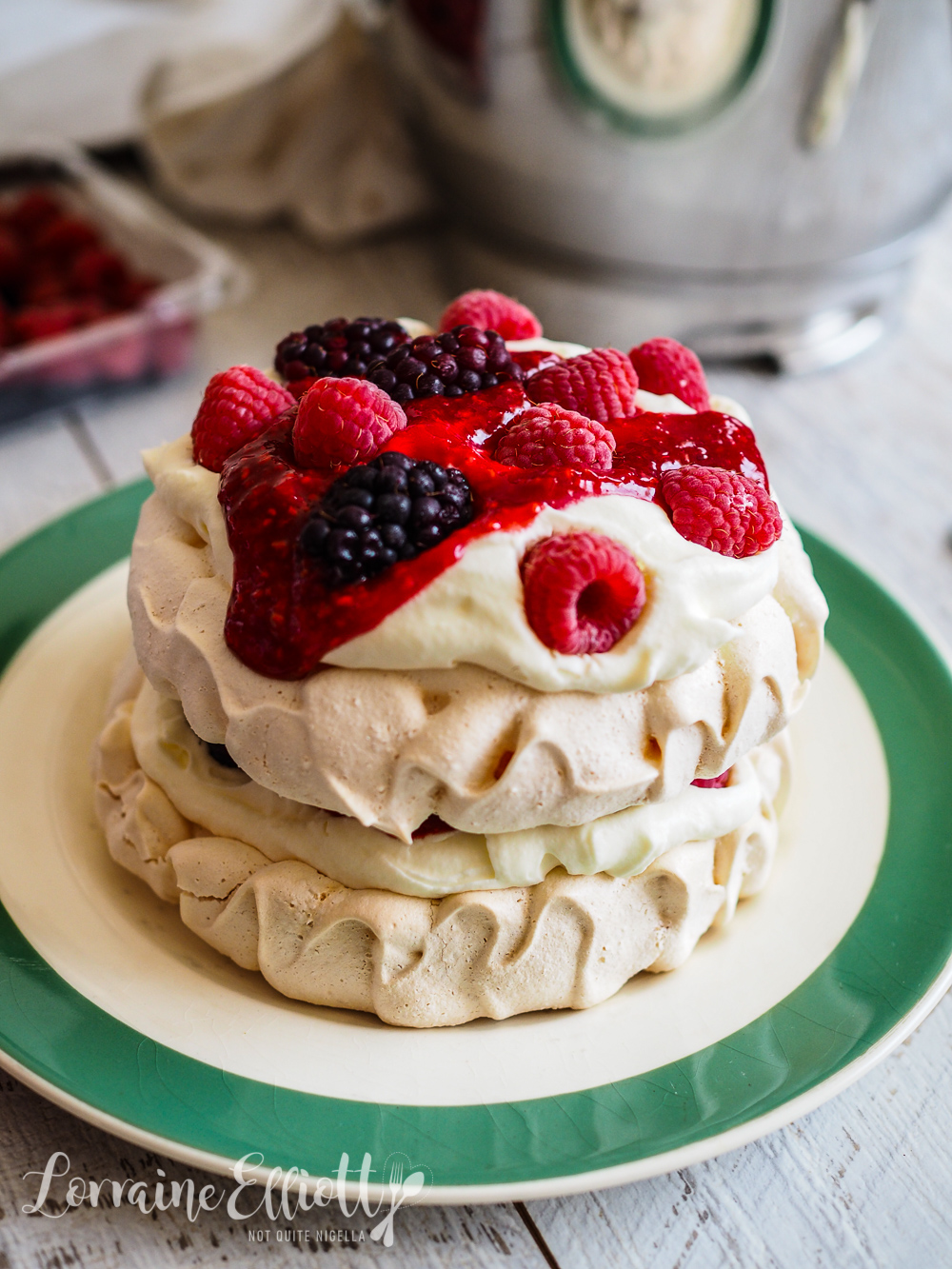 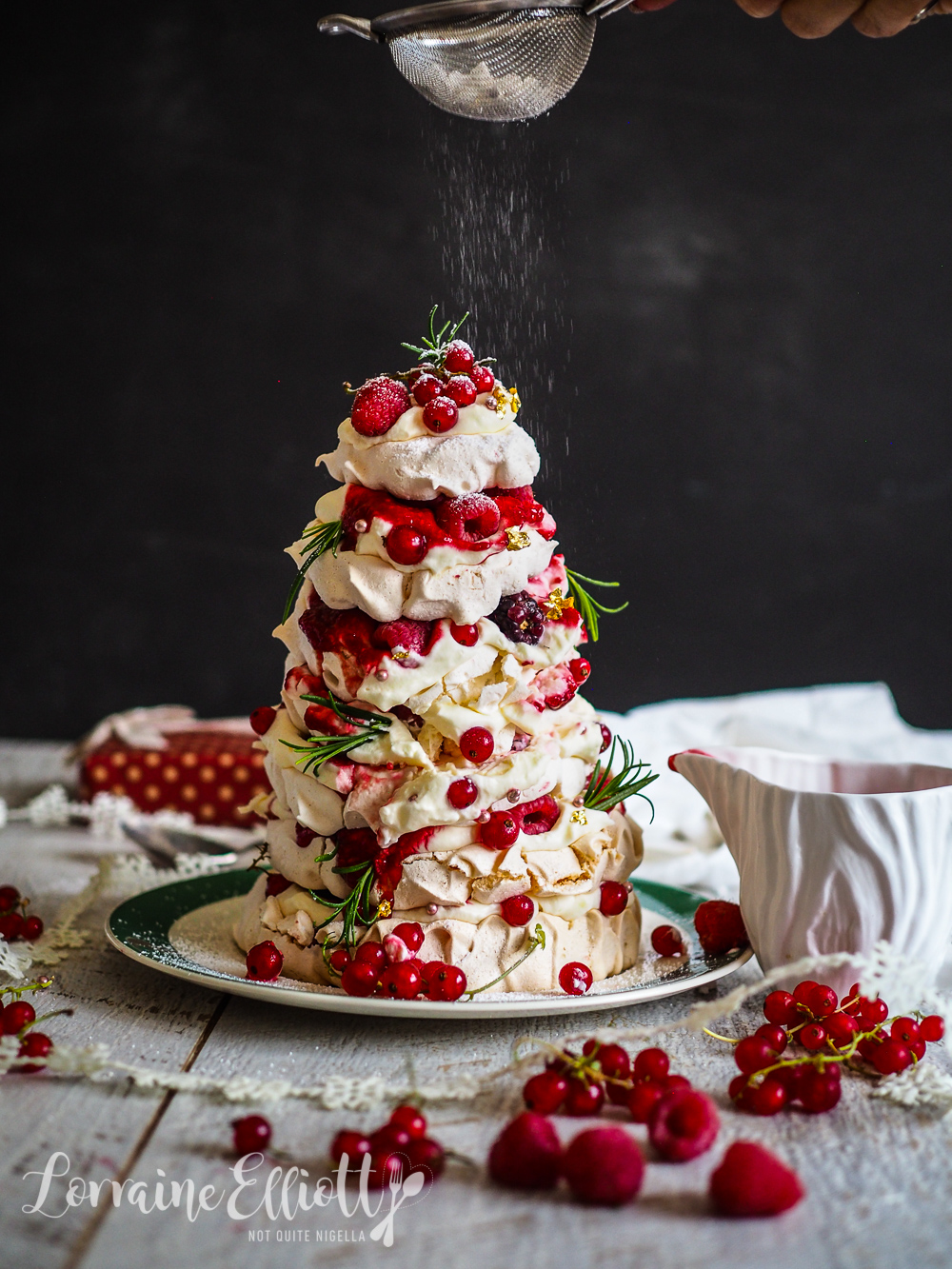